Search online for classic Midwestern casseroles and you’ll be met with a tidal wave of recipes. Taste of Home lists 90 in its collection of the “very best casseroles from the midwest,” while Midwest Living has two pages of stories under the “casserole” tag. Only, if you’re in the upper portion of the Midwest, it’s not a casserole, it’s a hotdish, as people from the region are quick to point out.

A casserole can be many things. At its most simple, a casserole is a one-pot meal or side dish made from a starch or grain, a protein, and vegetables. Some type of dairy is often thrown into the mix as well. It gets its name from the French word for the dish cooked in: a casserole, which is a large pan with a glass top. Hotdishes are similar, but have a creamy soup involved. Regardless of what you call them, there are indeed many of them — and many fervent fans in the Midwest.

“The casserole really hit its peak in the 1950s, when prepared soups (Campbell’s notably) became all the rage,” says Jim Mumford, who is a life-long Midwesterner and runs the recipe blog Jim Cooks Food Good. “Part of their marketing strategy was, in fact, creating cookbooks based upon these new foods.”

The then-new condensed soups were cheap and fast, Mumford adds, making them an easy choice for anyone who needed to feed a large number of hungry people without much effort or cost.

The idea of the casserole didn’t originate in the Midwest, or even the United States. Despite the French name, it’d be a tall task to declare any one cuisine as the original casserole inventor — layers of grains and proteins and vegetables slow cooked in the same dish is hardly a revolutionary idea. Nevertheless, casseroles (and hotdishes) hold a special place in the heartland.

“Due to chilly temperatures throughout the winter, the Midwest is best known for hearty, stick-to-your ribs comfort food, including casseroles,” says Kate Shungu, who runs the food blog Gift of Hospitality. “Many of the ingredients and inspiration behind these casseroles came from our European ancestors who settled in the Midwest, such as noodle casseroles from Germany, potato gratins from France, and shepherds’ pies and pot pies from England.”

Casseroles aren’t restricted to a season, but few things hit like a hot casserole in the winter. Comfort is key, says Luke Zahm, a James Beard nominated chef who hosts the PBS show Wisconsin Foodie and owns Driftless Cafe in Viroqua, WI. Whether it’s the bitter cold of Wisconsin in February, Minnesota’s long winter nights, or gray Iowa Decembers, few things can cure chills like a hotdish or casserole, Zahm says.

“Casseroles are all about comfort and efficiency,” he adds. “There is something soothing and familiar about an entire meal composed of starch, frozen vegetables, protein — all tied together with cream of mushroom soup as a unifying base. Is it fancy? No. Is it healthy? Maybe. Does it take away the sting of a Midwestern winter? Yes.”

Traditional recipes reign — or, as Zahm puts it: “Modernize casseroles? Blasphemy! If your grandmother was cold, would you hand her some modern ‘space blanket’ or the quilt she made 5 years ago?”

Still, some ingredients are swapped or added — a touch of spice to punch up the heat, for example — and Shungu says Instant Pot casseroles have been popular of late. Few things are off limits when it comes to Midwest casseroles and hotdishes.

Before tackling the dozens of Midwest casseroles out there, these are the ones to know. 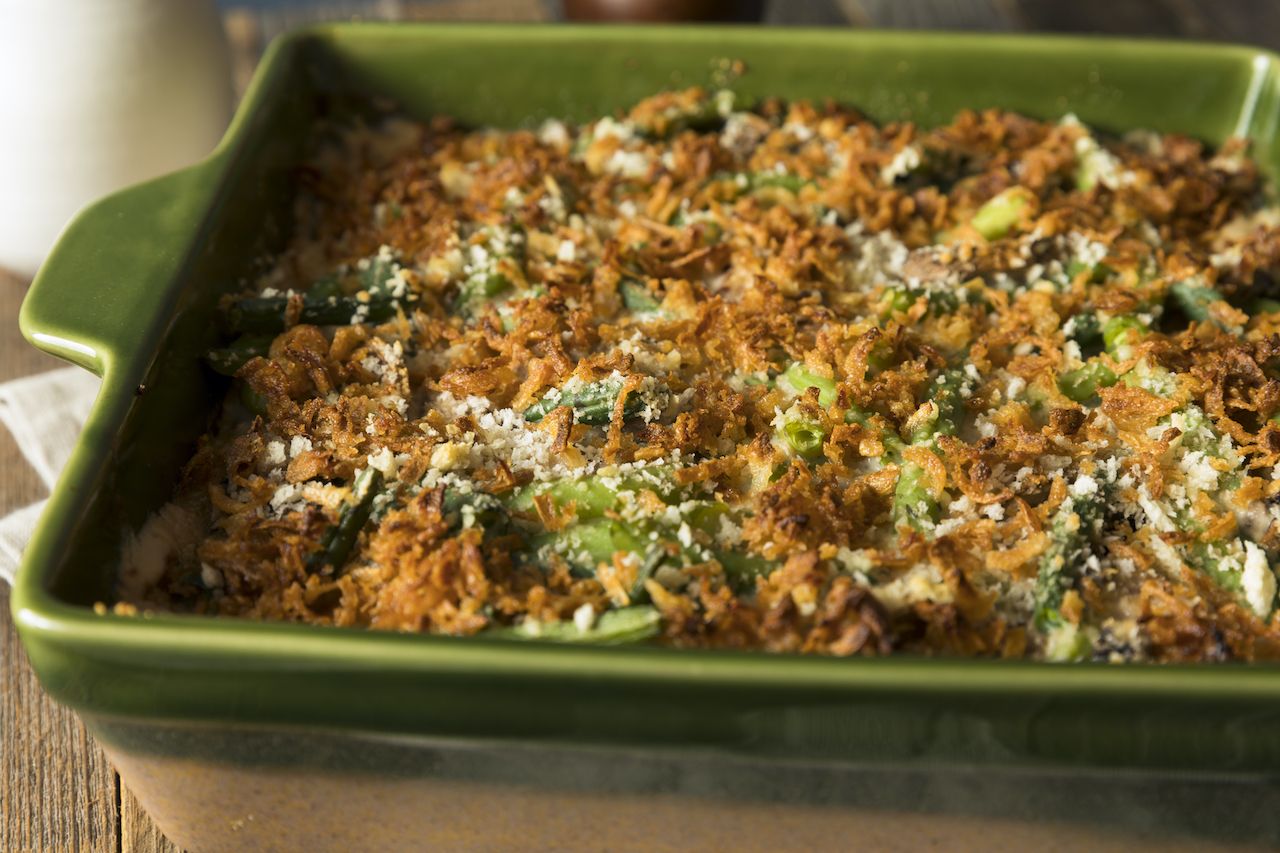 “Everything has canned ‘cream of something’ in it here,” says Angela, the Minnesota-based food blogger behind Bake it With Love. “If you aren’t serving the easy version of green bean casserole at Thanksgiving, you’re an out-of-towner for sure!” 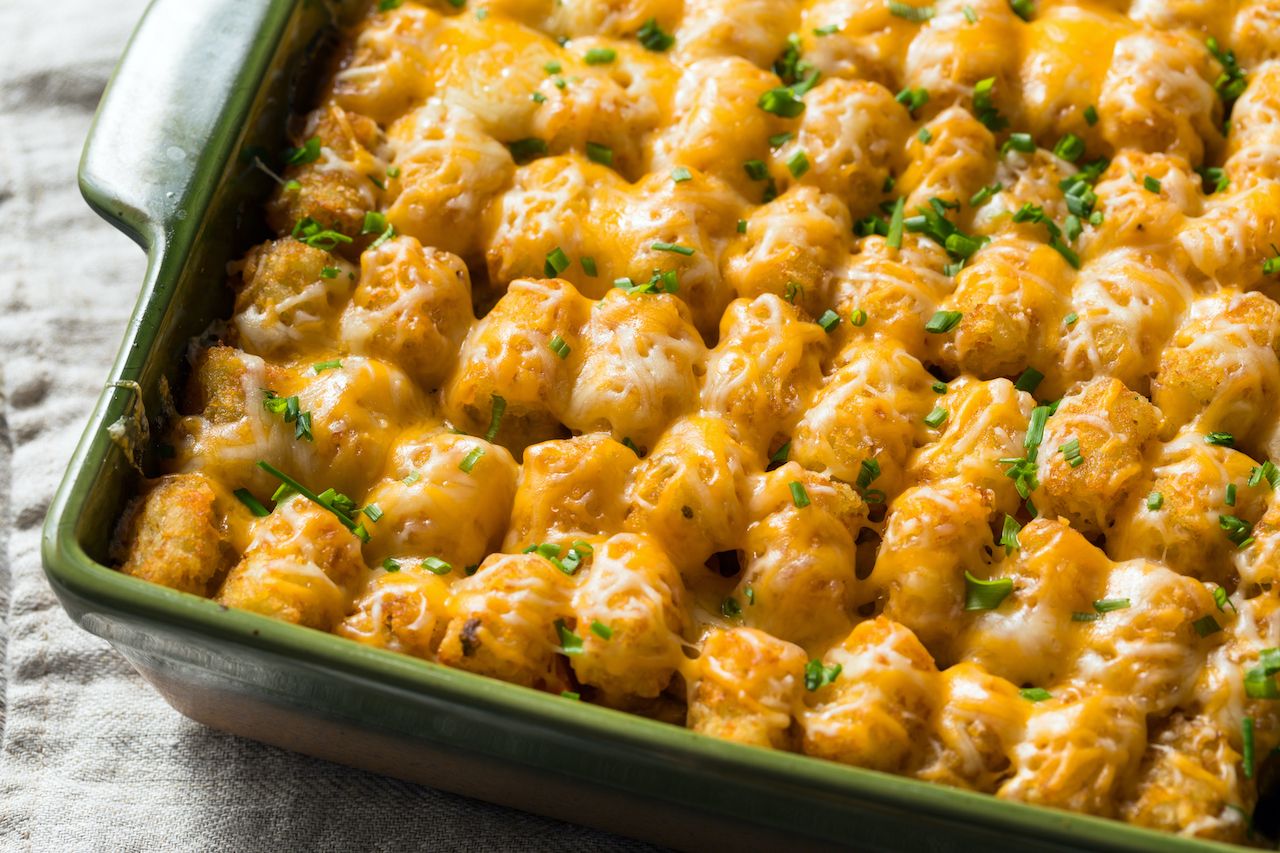 A favorite that’s typically made with ground beef, frozen green beans or peas, onions, and cream of mushroom soup. Tater tot hotdish is just about as hearty of an Upper Midwest classic you can find.

“This was a college staple commonly referred to as ‘grub,’” Zahm says. “Nothing sexy about it, but after a night of drinking in Madison and waking home in the frigid night air there isn’t anything more satisfying for even the most discerning diner.”

The dish has even been invoked for political uses. Minnesota Senator Amy Klobuchar rolled out her version of the tater tot hotdish during her primary run for president. Klobuchar didn’t win the nomination, but her Hot Dish House Parties were a smash. 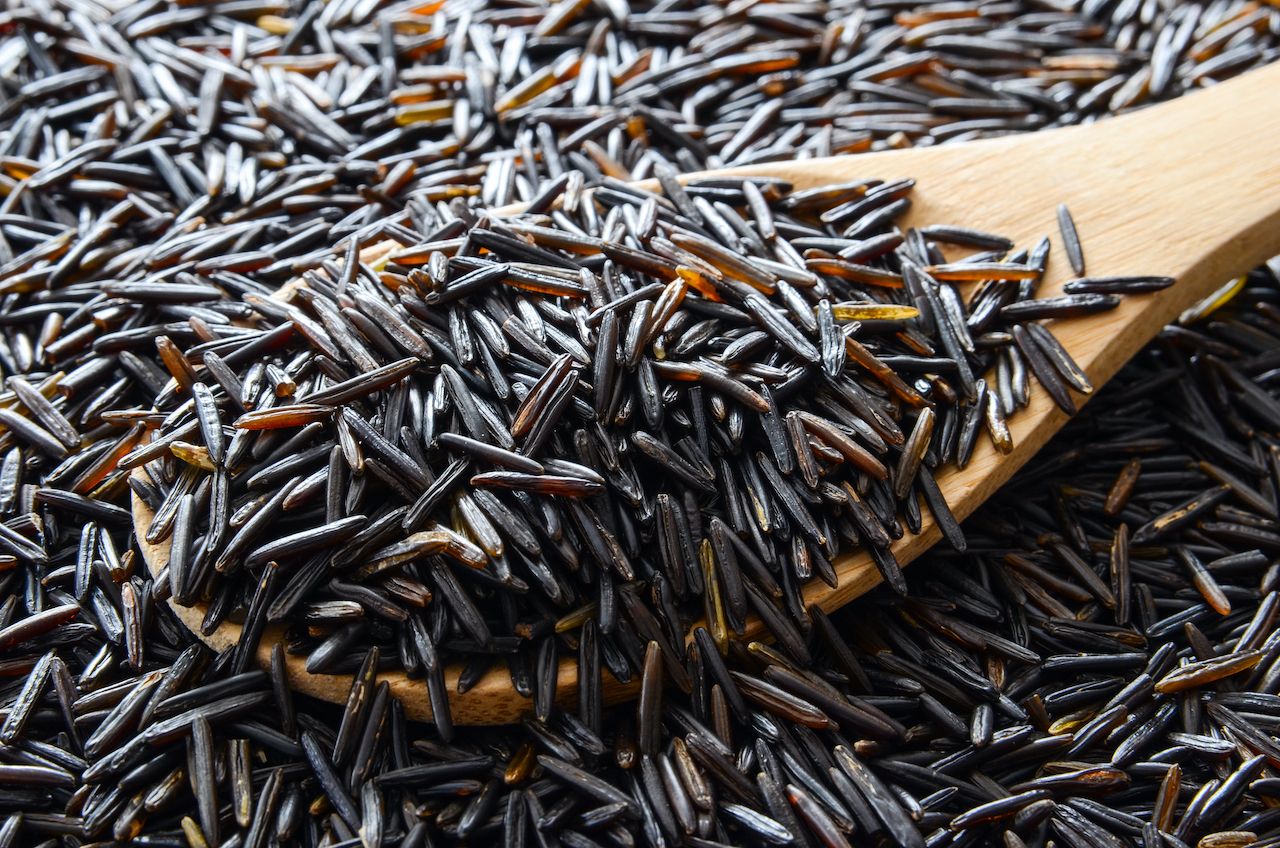 Along with the mandatory ground beef and cream of mushroom, the name-giving ingredient to this dish is wild rice from Minnesota.

The region’s wild rice is made with the grain from the Zizania family of grasses, which grows naturally in shallow water in some of Minnesota’s many lakes. Wild rice has long been an important crop for Indigenous people in the area. It was traditionally harvested by canoe by the Ojibwe people, who called it manoomin. The grains were a sacred part of their culture, and it’s still sustainably harvested in the traditional way today. Just keep an eye out for paddy rice, which appears to be wild rice but is cultivated, not wild. 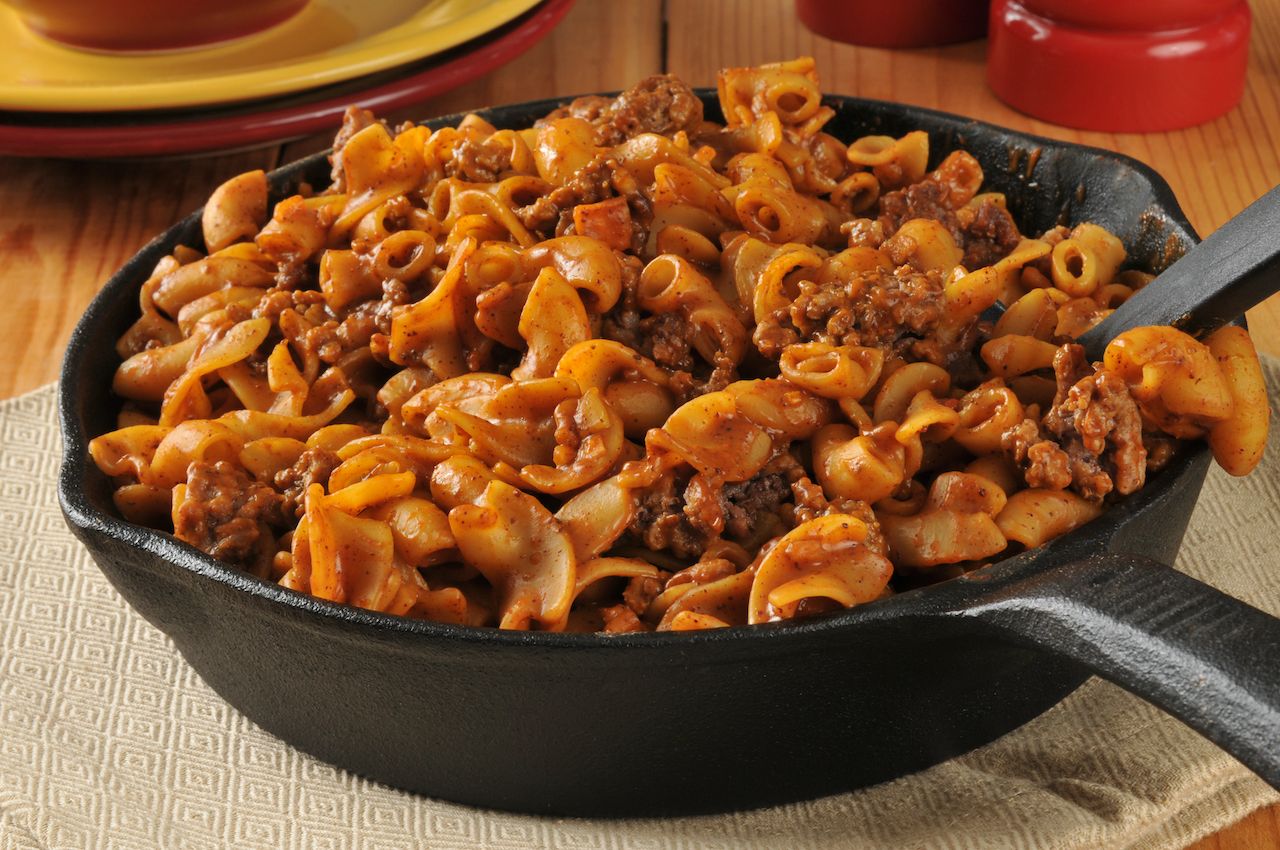 Sometimes called hamburger hotdish despite lacking the necessary creamy soup factor, this simple casserole is a blank paint-by-numbers board just waiting to be filled in. Start with hamburger meat, add some pasta, tomato sauce, and onions, and then top it with cheddar cheese before baking. Any spices and extras thrown in are what make it a staple. 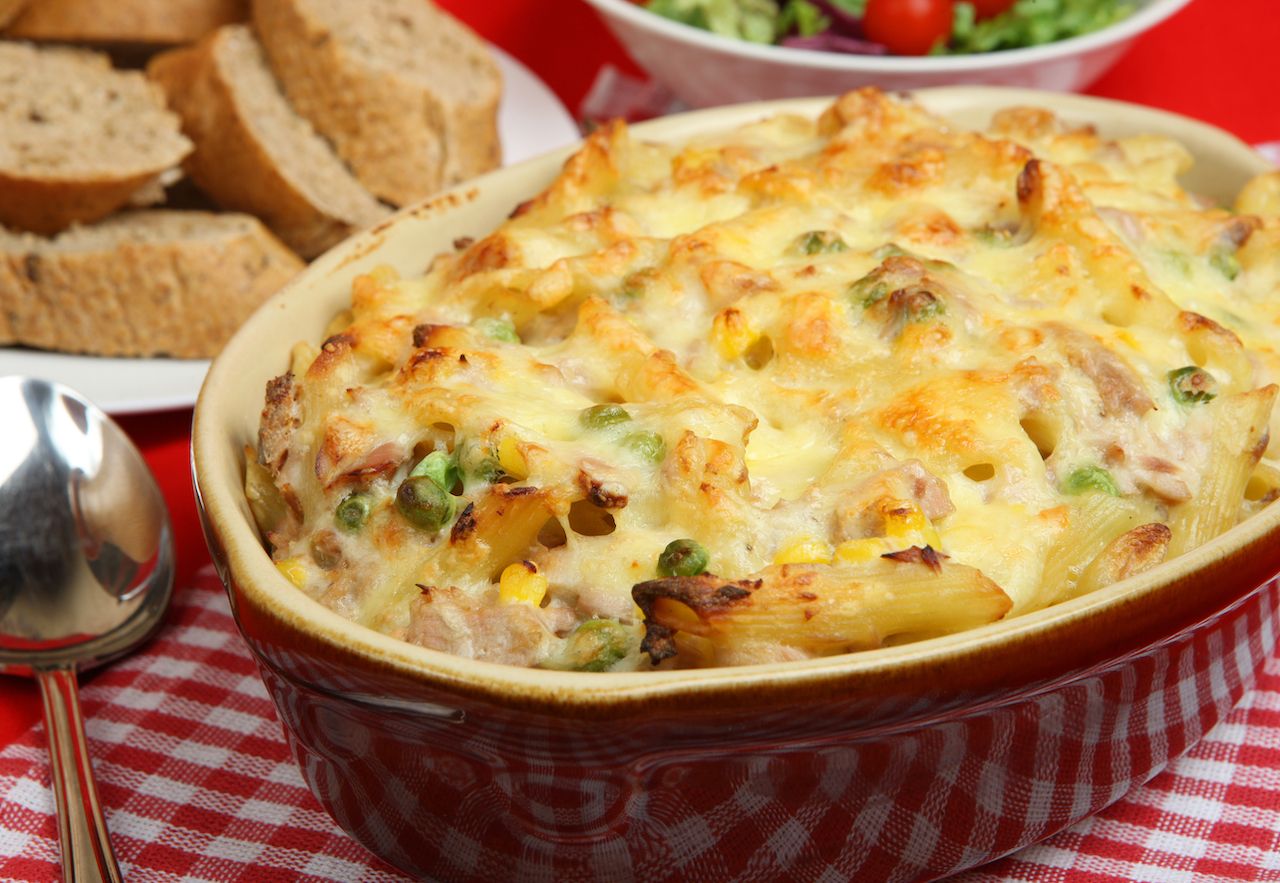 Perhaps “surprise” isn’t in your list of most appealing food descriptions, but this one is just as classic as green bean casserole. Bess Truman, President Harry Truman’s wife, even made a famous one that was one of the late president’s favorite meals. Tuna surprise is a tuna casserole made with egg noodles, tuna, peas, cheddar cheese, cream of mushroom soup, and fried onions.

“Midwesterners tend to shy away from seafood unless it’s canned tuna,” Angela says, “and leave it to New Englanders to make casseroles with oysters and clams.”

Though tuna surprise will always have its history, its popularity has waned in recent years, Mumford says.