The turquoise waters and paradise beaches of Brazil’s Região dos Lagos have earned this watery region the nickname Caribe Brasileiro, the Caribbean of Brazil. The area lies on a lake- and lagoon-filled coastal outcropping in Rio de Janeiro state, just a couple hours’ drive north of the city of Rio. While it’s best known for the glitzy beach resort of Búzios, the less-traveled town of Cabo Frio is less than an hour south of Búzios and offers a lot to those fortunate enough to visit. Locals cherish Cabo Frio for the high quality of life, the ease of getting into nature, and the fact that you can have gorgeous places to yourself.

It has some of Brazil’s best beaches. 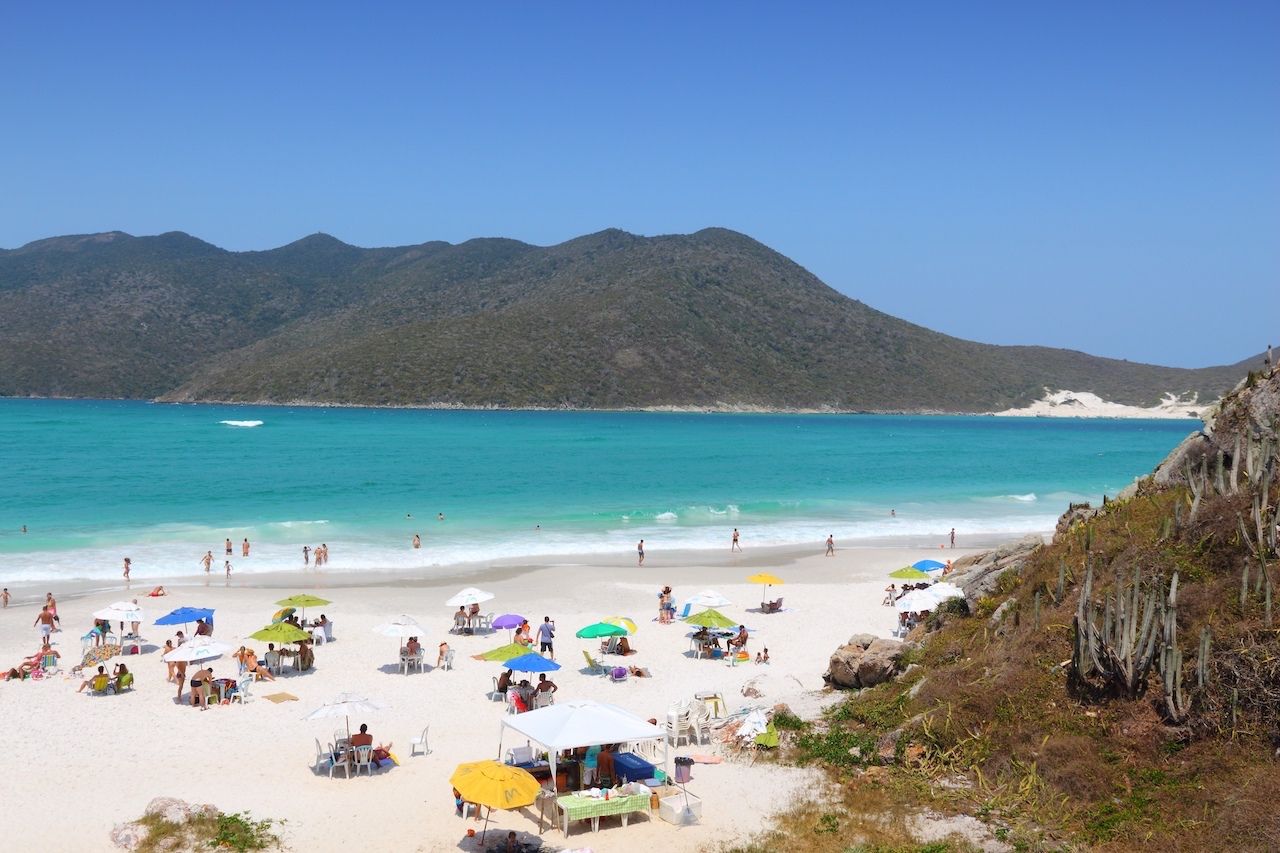 Several of the beaches in Cabo Frio and the neighboring town of Arraial do Cabo have been named the best in Brazil. You could visit a new beach every day for months without running out of options. Praia Pontal, Praia das Conchas, and Prainha are the spots to head to relax and listen to the waves, while Praia Foguete and Praia Brava are wilder with bigger waves.

Cabo Frio’s main beach, Praia do Forte, should be your pick for lively ambience. At night, the boardwalk fills up as people kick back at the kiosks with live music and an icy cold Brahma, Brazil’s most popular lager. This is also where the city’s postcard symbol from the 15th century is located, the San Matheus Fort. Climb up its stairs for great views, especially around sunset.

You’ll find swells all year in and around Cabo Frio, considered one of Brazil’s top surfing areas. Peró, Dunas, and Brava beaches are a few options with great wave-riding conditions. In addition to competitions like Cabo Frio Surf Pro, the Surf World Cup is held in the neighboring town of Saquarema. The entire region has a strong surf culture. Stop by Barrel Surfboards on Rua 13 de Novembro for gear and to check in on the day’s conditions.

Cabo Frio is also the birthplace of Brazilian surf champions like Victor Ribas, and home to the surf museum with the largest collection of surf equipment in Latin America. Owner Telmo Moraes has more than 800 boards on display. It’s an informal gallery, so if you wish to visit, stop by the location on Rua Aníbal Amador do Vale in Citizenship Square in the late afternoon. Google shows that it opens at 5:00 PM, but comments list hours starting as early as 4:00 PM.

You can find secluded spots, dive, or swim with turtles. 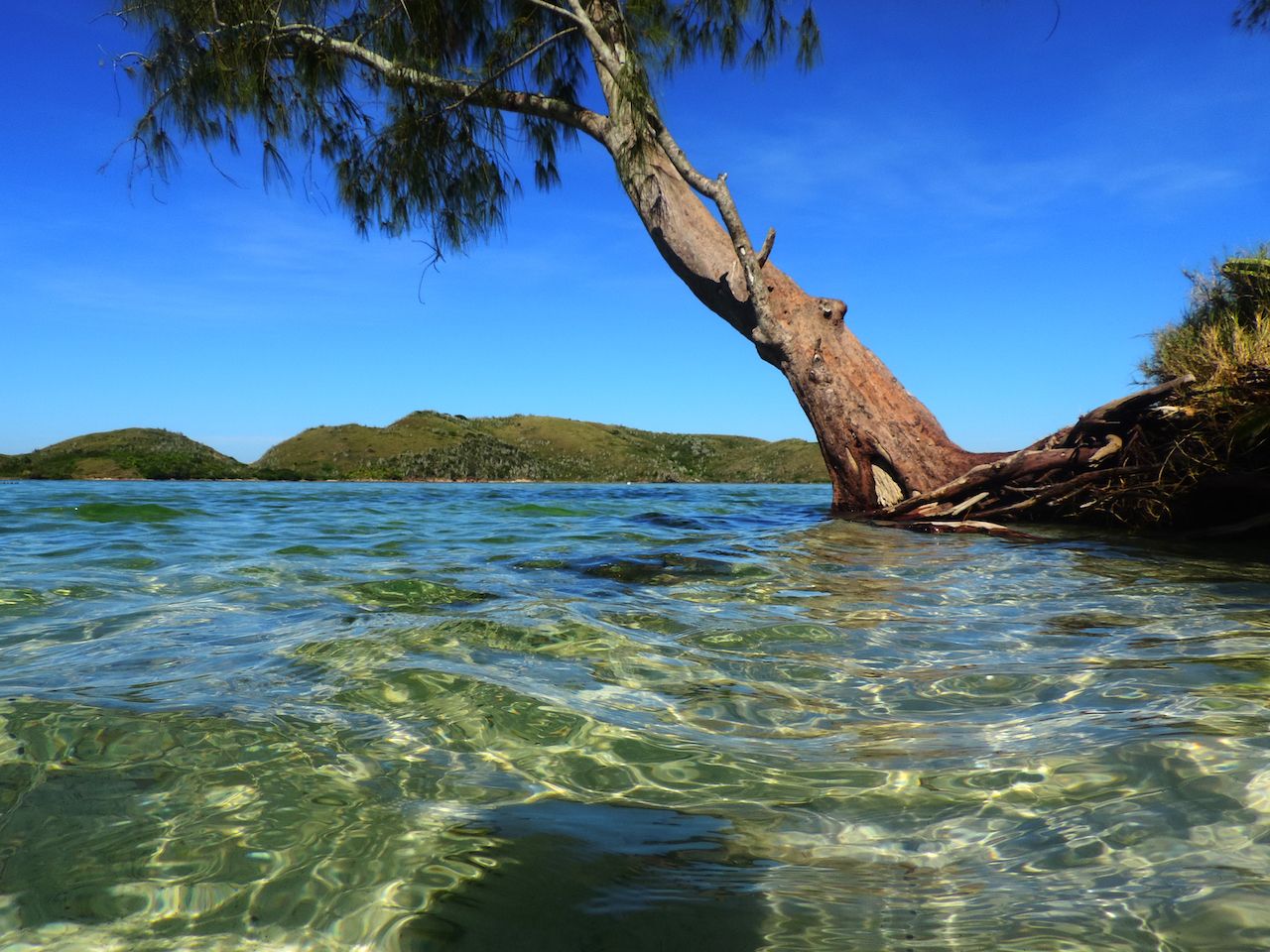 Many local providers including Guga Tour and Camp Tur Boat Trips organize ocean excursions that take you around nearby islands to a series of caves and beaches only accessible via the water. While these tours can get crowded in the high season — South America’s summer months are from December to March — you can also rent your own boat for a more private experience. Combine your cruise with scuba diving if that’s your thing. Papagaio Island is one of the most sought-after diving spots in the area, but there are more than 30 other spots to choose from.

Either a 20-minute boat ride or a 30-minute drive from Cabo Frio is Ilha do Japonês, Island of the Japanese, which some say was named for a man who came from Japan and lived on the island over three decades ago. The island is a popular escape with stunning scenery. Relax on one of its beaches or rent a kayak and tour the bay. Don’t be surprised if you’re accompanied by giant sea turtles, as they’re common in the area. When you’re ready to eat, small boats sell everything from churrasco (barbecue) and salgados (salty snacks) to Caipirinhas, the official cocktail of Brazil made with a sugarcane liquor called cachaça, crushed limes, sugar, and ice.

You can admire beach views or colorful bikinis (in shop windows). 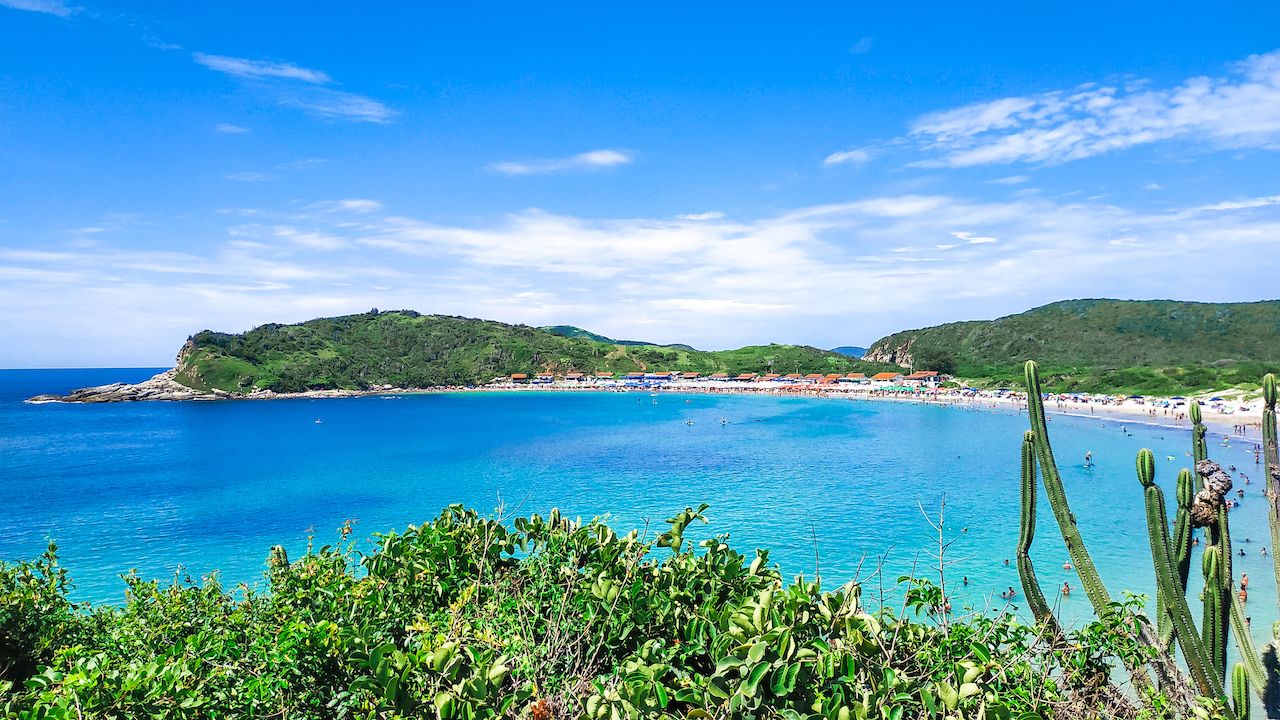 Apart from the week of Carnival, life is relatively slow in Cabo Frio, with few crowds outside of weekends and major holidays. Since there are so many places to visit in the area, it’s possible to find secluded spots that make you feel like you’re the only person in the world. Whether it is a little beach or a rough cliff with a view, you will be able to disconnect from everything and everyone for a while.

Or you can marvel at Brazil’s obsession with bikinis. Shopping Gamboa, also known as Rua dos Biquínis, Bikini Street, lives up to its name. With over 100 swimwear shops lined up one after another, it’s a destination of its own. You can easily spend hours here, going from one colorful shop to another and looking at both exclusive and budget beach-life brands. If you don’t find a piece of swimwear you like here, you probably won’t find it anywhere.

The nightlife is just right — not too crazy, not too mellow. 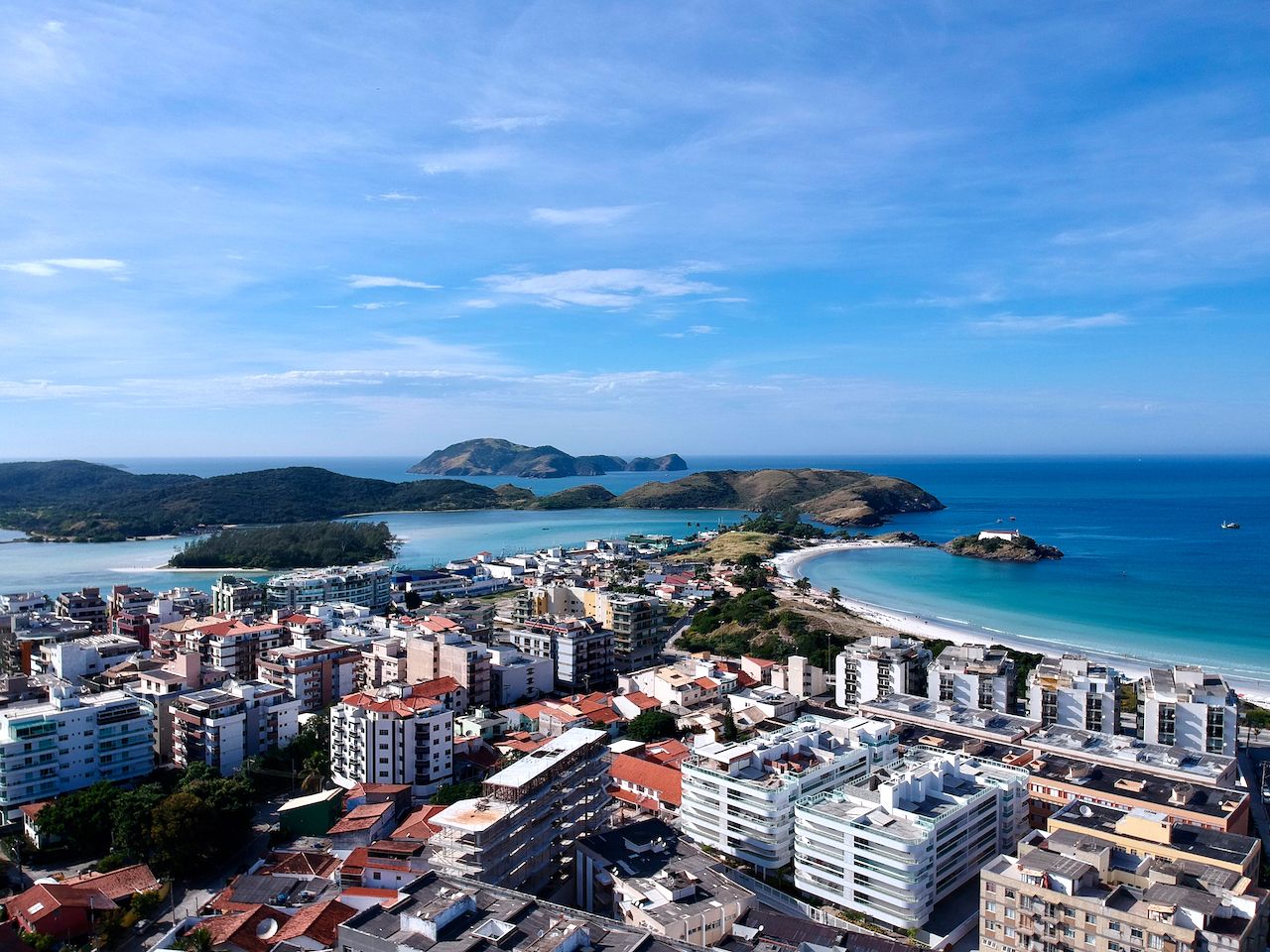 While Cabo Frio isn’t Brazil’s party capital, the town has great options for dining, bar-hopping, and live music. The Boulevard by the Itajuru Canal and the charming historic center come to life at sunset, with terraces ideal for spending a few — or several — hours at the Boulevard Pub, Anexo Job’s, and the Queens Lounge Bar. Rua Porto Alegre, a street with no-frills bars, tasty crepes, and local musicians, is a more recent addition to the scene. Here, the nightlife goes on until about 3:00 AM. If clubbing until sunrise is more your style, clubs like Privilège in Búzios, described as Brazil’s Ibiza, are located 30 minutes away.

Part of what makes Cabo Frio so appealing is its proximity to diverse places and activities in the Lakes Region. While life in Cabo Frio is relaxing, it’s even slower in Arraial do Cabo, located a 15-minute drive away. When it’s time to leave the “Caribbean of Brazil” behind, Cabo Frio International Airport has direct connections to other destinations in Brazil such as Petrópolis, Rio de Janeiro, São Paulo, and Belo Horizonte. 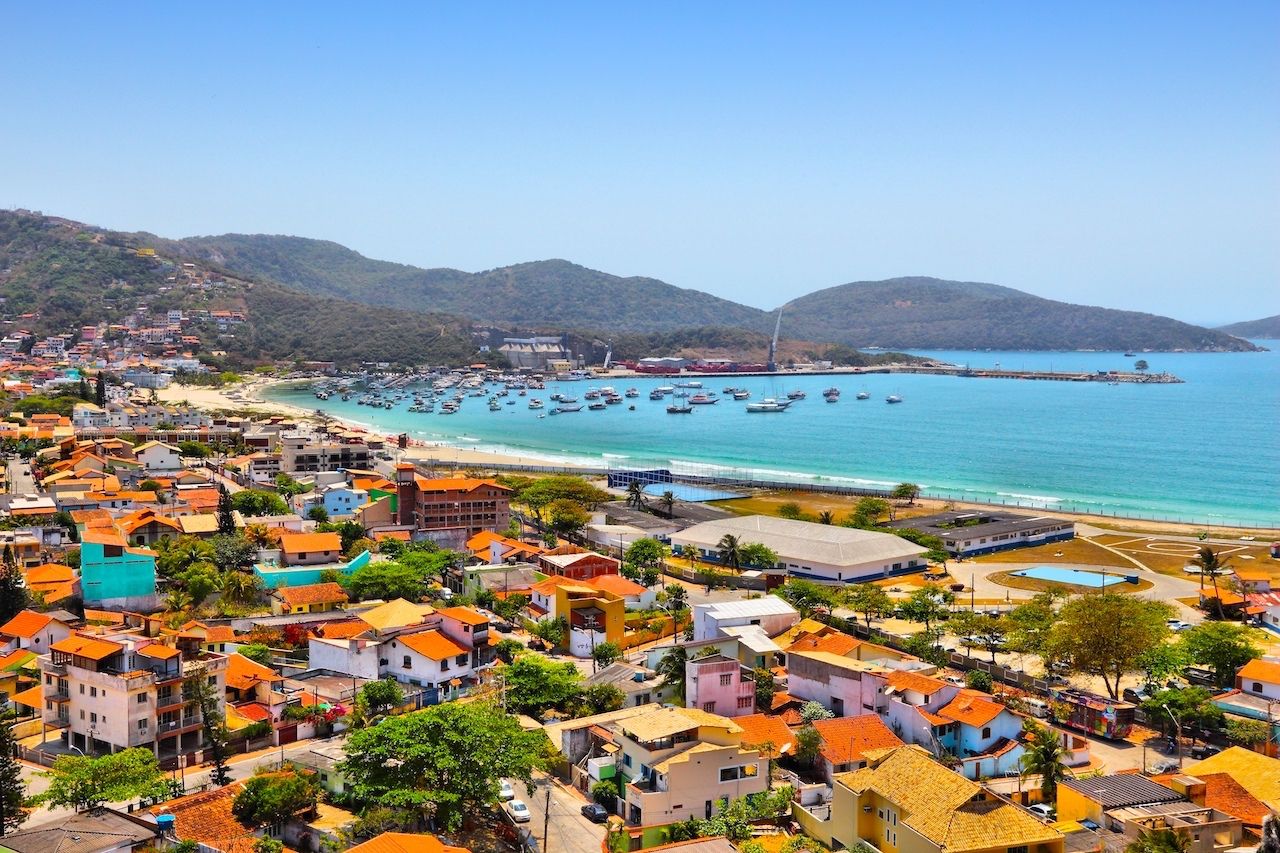 Tourism has increased in Cabo Frio over the past 10 years, resulting in accommodation options of all kinds. A studio along Praia do Forte or a small hotel in the historic center such as the Pousada Enseada da Vila ($53 per night) are good alternatives if you like to be close to the action. If you prefer more privacy, there are beach cabanas where you’ll be surrounded by nothing but nature.

Apart from the commercial options, several locals rent out apartments and houses for the season both in the city and by the beaches. Check Airbnb or run a quick search on Google Maps for current listings. No matter which option you choose, accommodations in Cabo Frio are more affordable in comparison with the more touristy towns nearby.