Right out of the gate, I’ll disabuse you of a fantasy: there are no secret, “locals-only” beaches in Italy. All those amazing photos of perfectly deserted Italian beaches, with soft sands, often dramatic backdrops, and waters so clear they have to be seen to be believed? Those places really do exist – but the photographers certainly used some strategic cropping to capture those lone influencers on enchantingly empty beaches. That’s especially true in July and August, when seemingly all of Italy and the rest of Europe heads to il mare – the sea.

But that doesn’t mean you shouldn’t go to the beaches in Italy – just that you should know what to expect. No beach is a secret, but some are harder to get to than others, which means they’re more likely frequented by in-the-know locals rather than out-of-town visitors.

Some are tucked away in national parks or nature reserves, which means no one around to sell you an aperol spritz in a to-go cup – you decide if that’s a selling point or not. Some of the best beaches in Italy can only be reached by boat, by hot and sometimes precarious hikes, or by taking the car a little farther down the road than most everyone else.

The list below includes some of the best beaches in Italy where you’ll find Italians on holiday, where you can get that “I can’t believe the water really is this clear” wow factor and maybe — maybe — encounter slightly smaller crowds.

Note that the beaches below offer spiaggia libera areas, or free sand beaches (where there’s no fee to access the beach) as opposed to just stabilimenti — paid beach establishments with rows and rows of lounge chairs and umbrellas.

Cala Liberotto (Nuoro, Sardinia): For a local beach with plenty of “free sand” 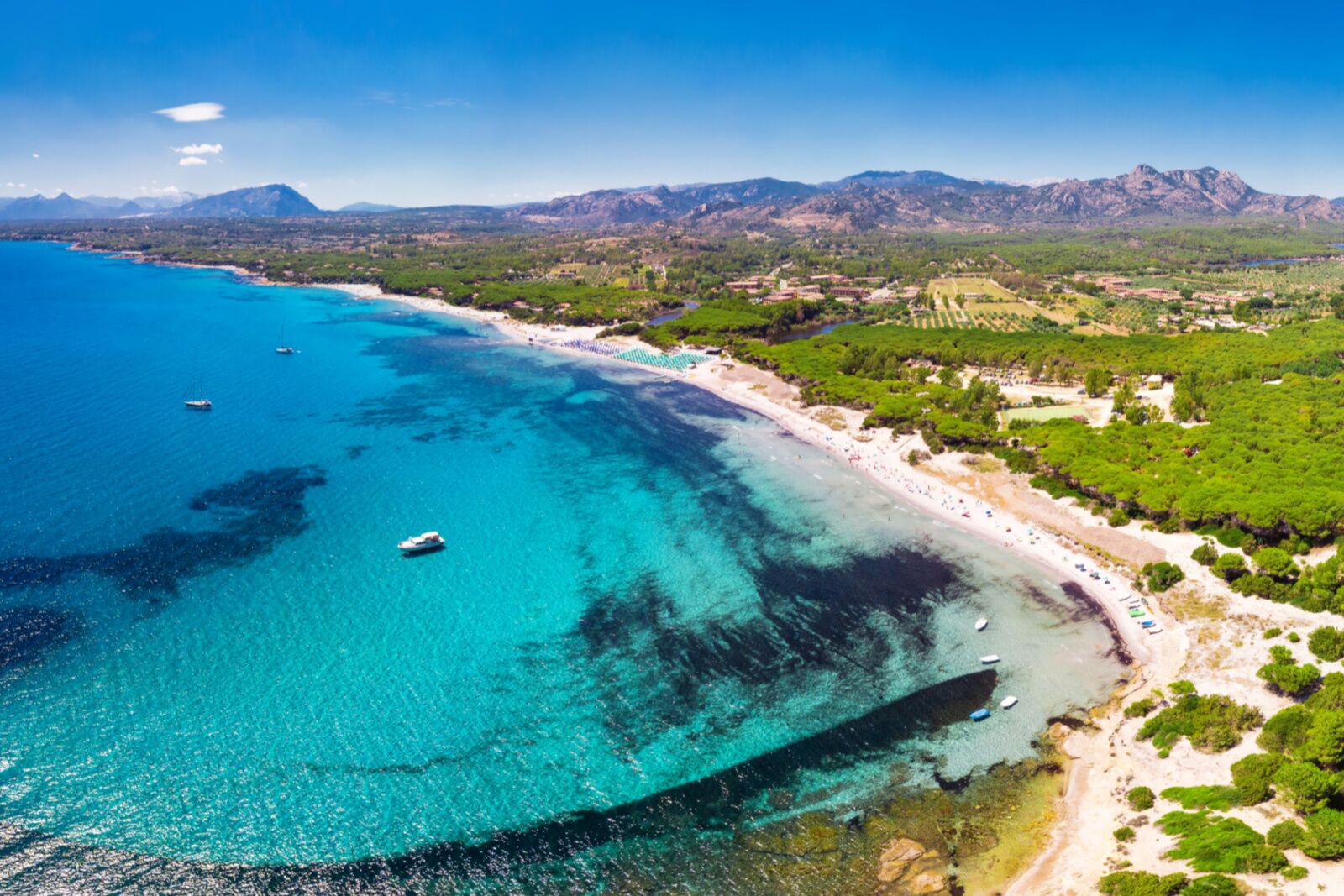 It’s easy to devote pages and pages of writing just to the best beaches of Sardinia. Italy’s second-largest island is straight-up fabulous, especially when you’re swimming in its astoundingly bright blue water.

Among the incredible choices on the Gulf of Orosei coastline on the island’s eastern side, Cala Liberotto offers some of the wild appeal of harder-to-reach beaches to its south (like Cala Mariolu or Cala Goloritzé), areas of softish sand, rock formations that offer interesting snorkeling, and the appeal of nearby parking, snack bars, and restaurants. There are also large areas of public, unpaid access on this beach, so there’s plenty of room to spread out. 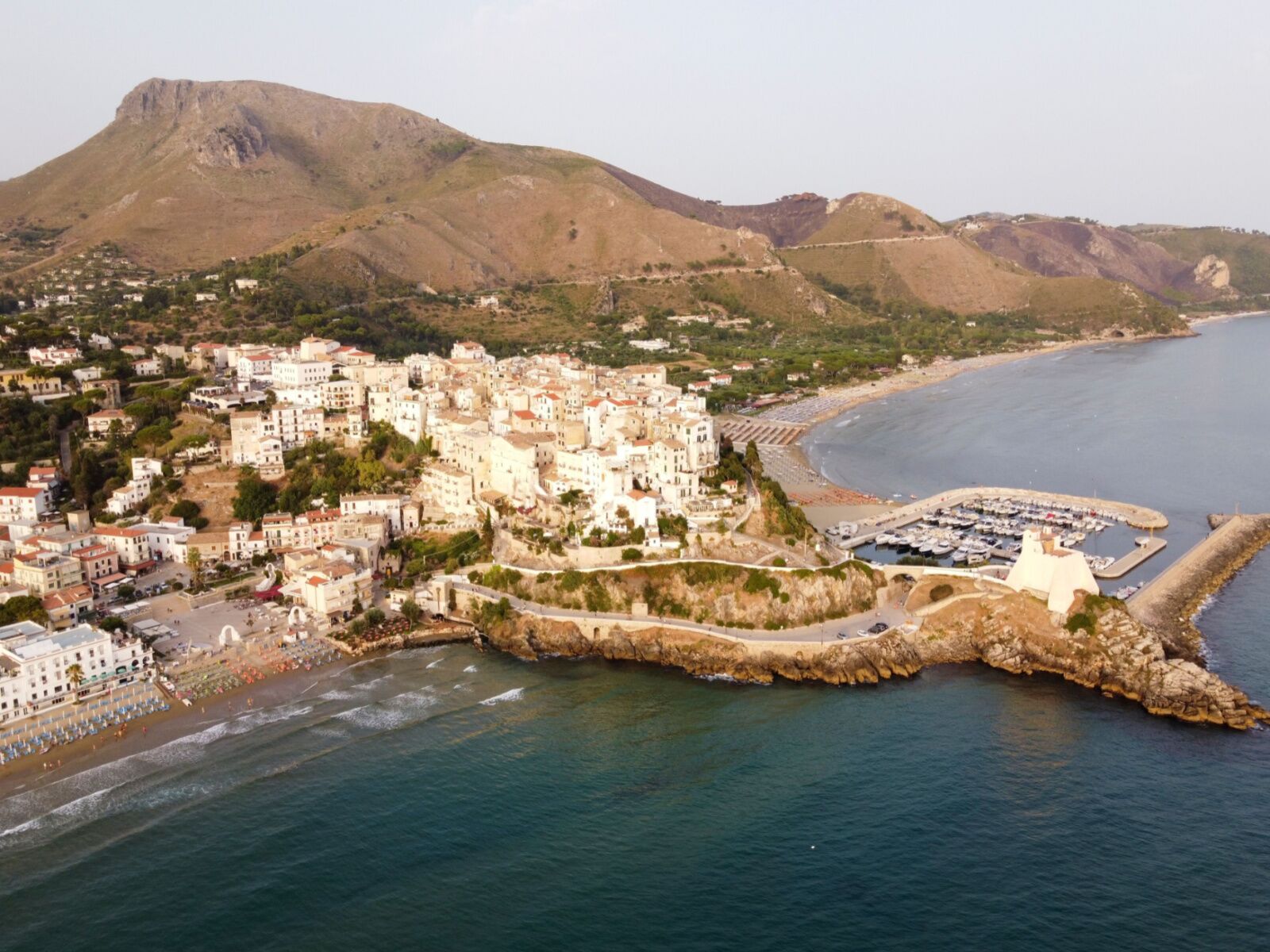 For the widest and best stretch of white-sand beach and calm, clear water for swimming and paddling still sort of close to Rome, get thee to Sperlonga. The old town itself is a delight — a whitewashed village set over the sea that may have you thinking you’ve stumbled onto a Greek island.

The area has several free beaches. Grotta di Tiberio is near the seaside ruins of a villa built by Roman Emperor Tiberius (this is Italy, after all). Otherwise, since the 3.5-mile-long beach is lined with stabilimenti, it’s easy to just pick a beach club and enjoy your place in the sun for the day.

From Rome, you can reach Sperlonga by car, or take a direct train to Fondi Sperlonga station and a bus or cab from there.

Spiaggia di Sant’Andrea (Livorno): For a tiny slice of perfection on Elba 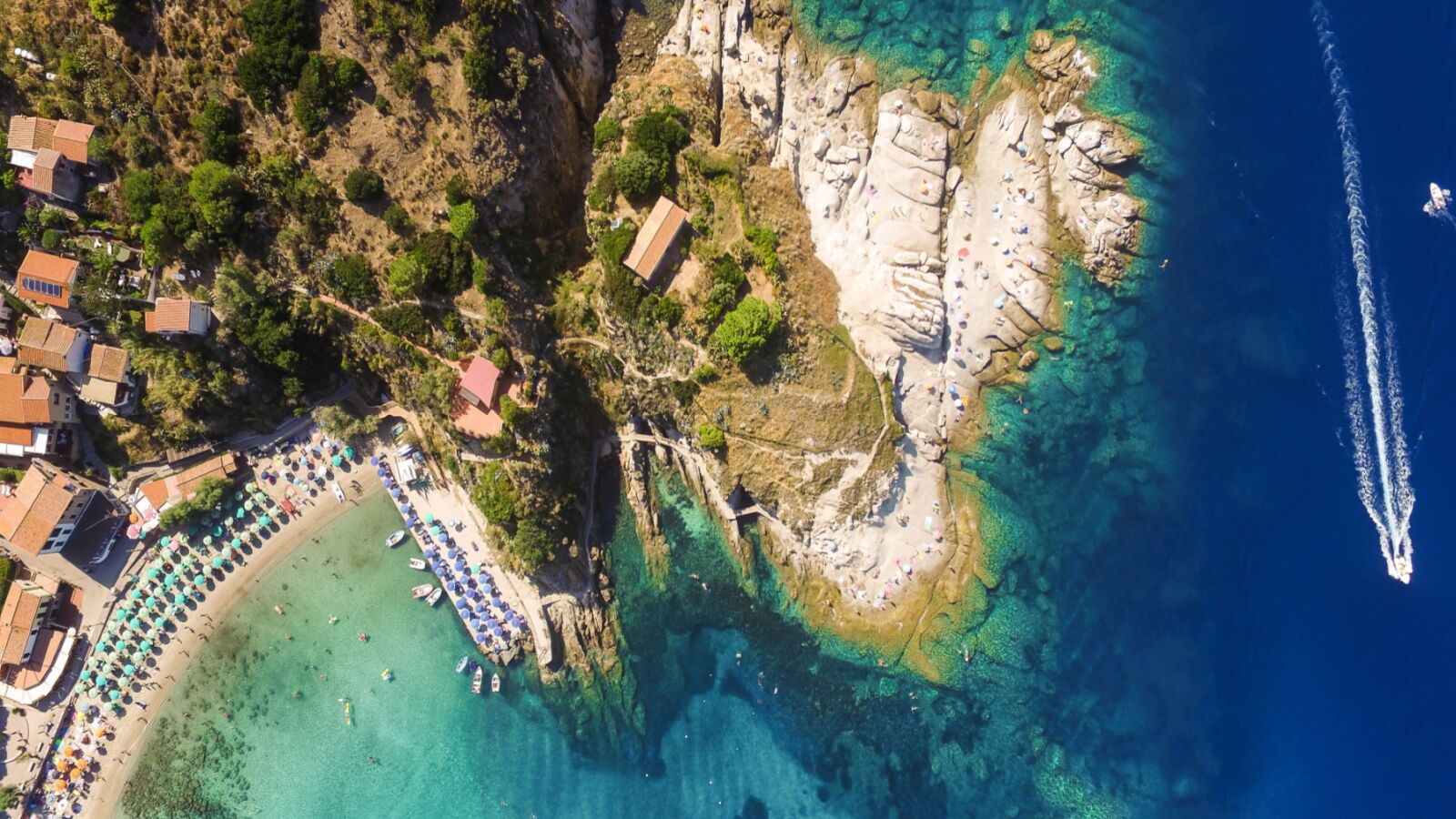 Isola d’Elba, the largest island of the glorious Tuscan Archipelago, has at least 80 named beaches. Everyone who knows the island has their favorite, and so does this writer — pint-sized Sant’Andrea beach in the hard-to-reach village of the same name.

Wedge into the small section of free beach near the tide pools and plan to spend the day in and on the water as the snorkeling and padding here is abundant and top-notch. We walked a coastal path a short distance to Cotoncello Beach, swam in a sea cave, then snorkeled back to Sant’Andrea. It’s worth spending the night in Sant’Andrea village just for this petite beach experience. I recommend Boutique Hotel Ilio, as do a lot of past guests. 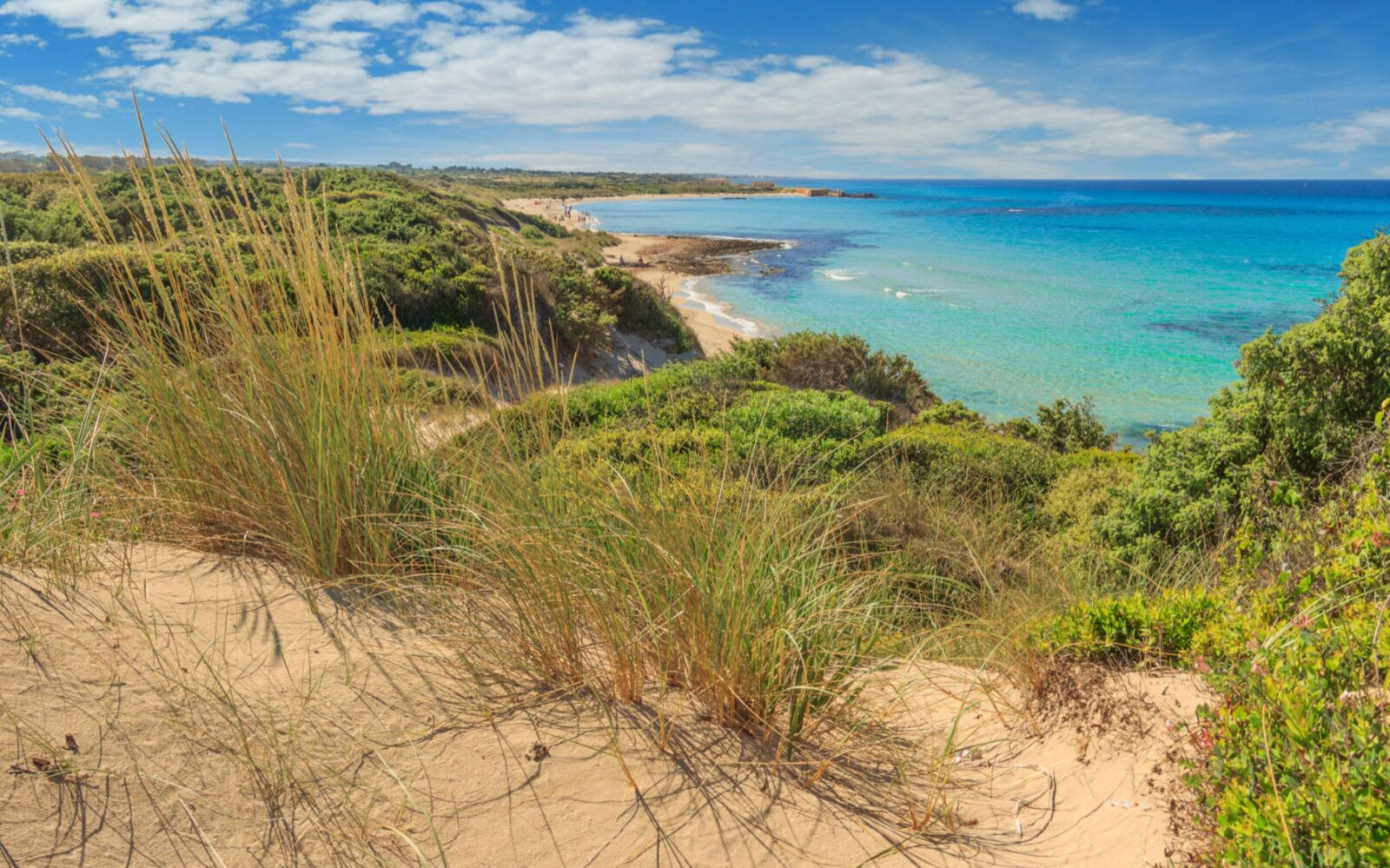 It’s been a while since anyone could legitimately refer to Puglia as “undiscovered Italy.” It’s on the tourist map, as are its most picturesque — and as a result, most photographed — beaches.

But it takes a little more effort to get to the wild beaches of the Torre Guaceto Nature Reserve. For starters, you need a car (or an Italian friend with a car), and you need to pack in and out everything you’ll need for a day at the beach (Leave No Trace, after all). It’s a long walk from the few parking areas down to the beaches, but the longer you walk, the more blissful the isolation you’ll find along this five-kilometer stretch of sand. The water is shallow, and snorkeling around rock formations is a must-do whether you’re seven or 70.

From Brindisi, it’s about 20 minutes north by car to the park boundaries.

Baia degli Infreschi (Salerno): For a trek to a pristine paradise 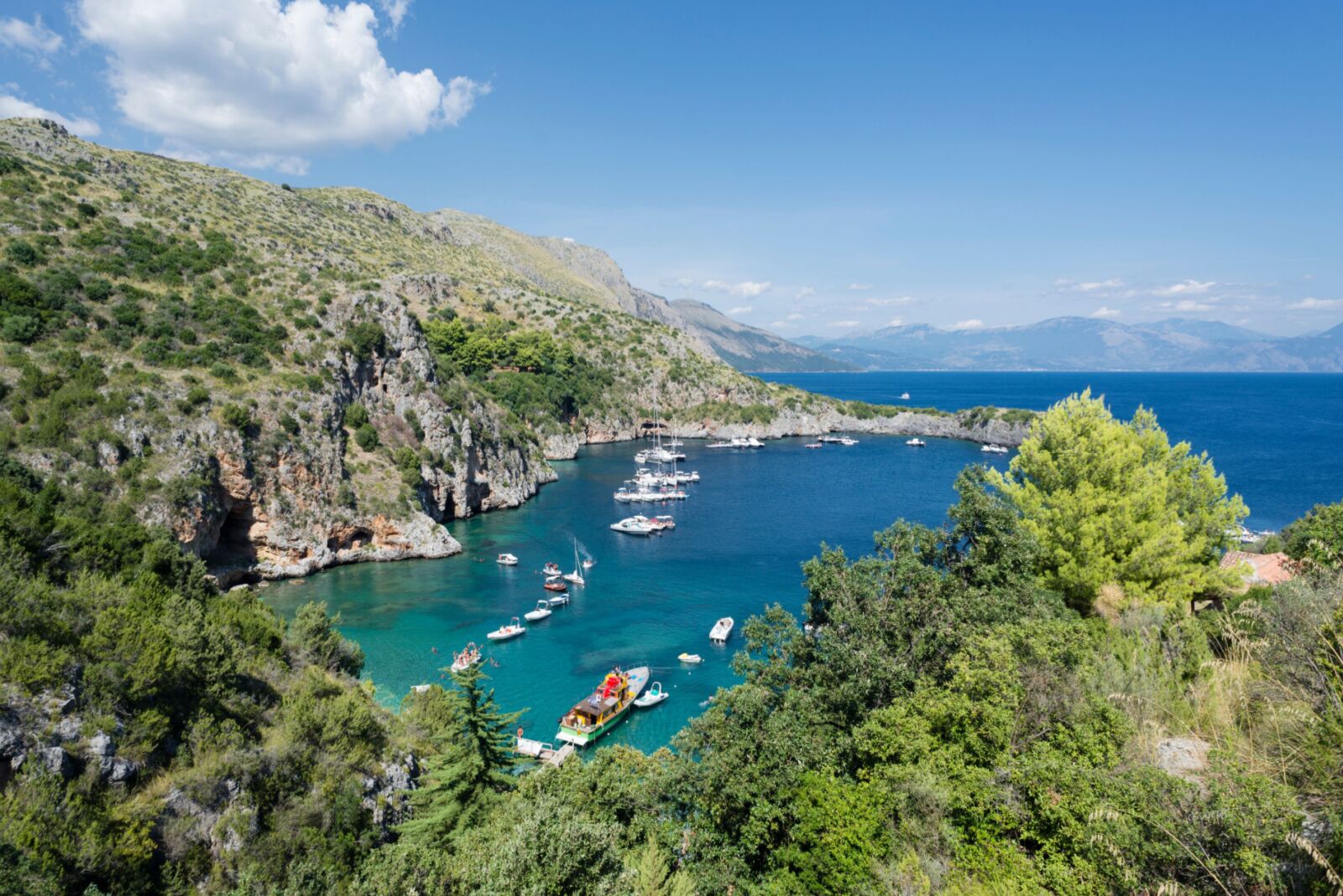 One of the best beach areas in Italy is also the wildest: the undeveloped stretches of the Cilento, part of a combined UNESCO World Heritage Site in the southernmost end of the Campania region. Head here, and you’ll see the coast much as it must have appeared to the Greeks, Etruscans, and Romans who once plied the waters.

The dramatic, rocky coastline is cut here and there with small bays and coves, most of which are only reachable by a rugged hike (bring your hiking sandals) or, easier, by boat. Tops among these is Baia degli Infreschi, named for the freshwater springs that bubble up underwater.

Stake out a small piece of sandy beach, snorkel, explore swimmable sea caves of dizzying turquoise blue — and make friends with an Italian with a boat. Marina di Camerota is the closest town. 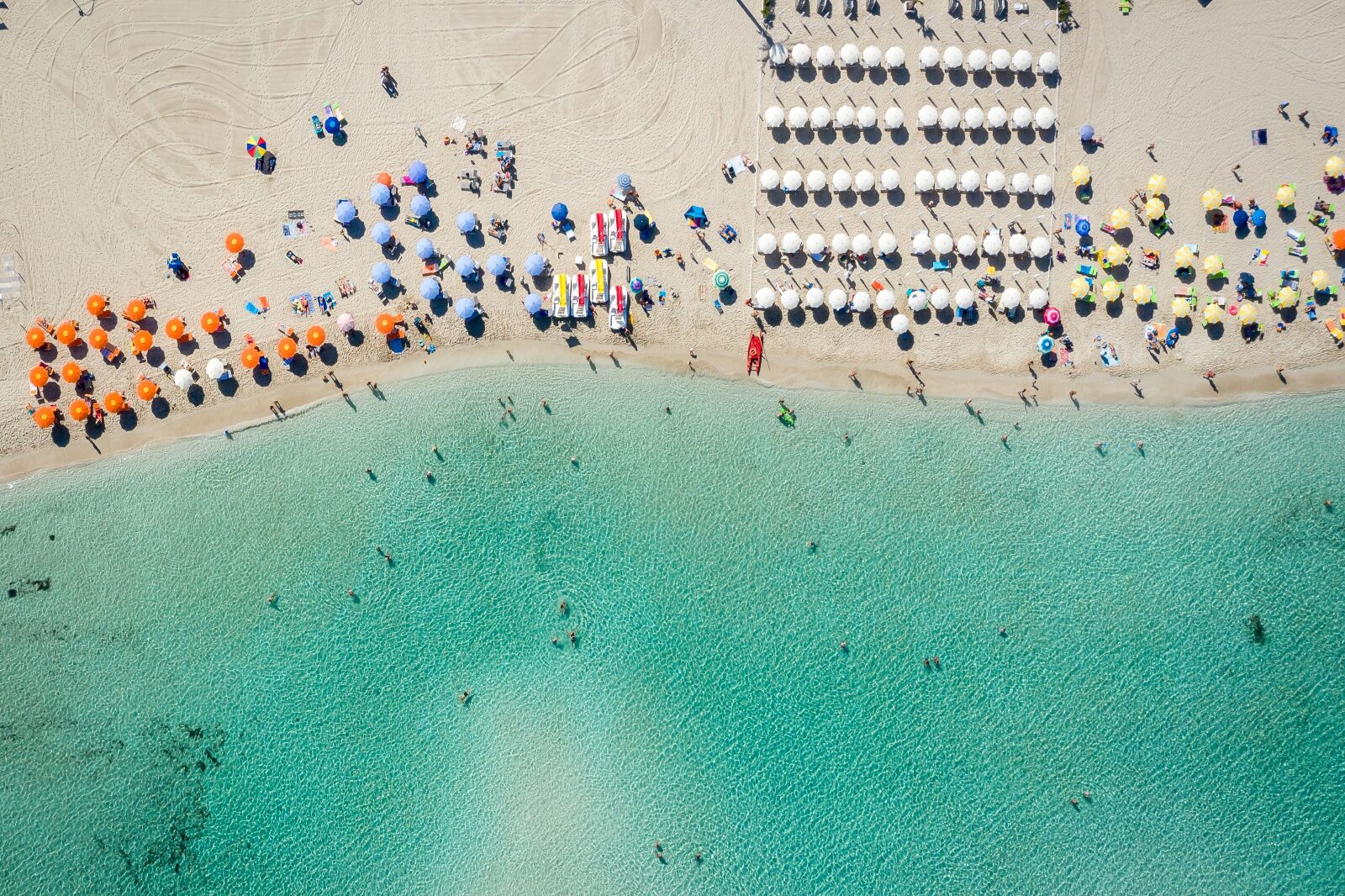 I recommend Trapani’s San Vito lo Capo beach not because it’s lesser known or less visited, but because it is everything about going to the beach in Italy — surging summer crowds; neat grids of tightly placed sun parasols (there are free beach areas dotted between the paid umbrellas); roving vendors selling toys, jewelry, and whatnot; and rows of beach bars serving up granita, spritzes, beer, seafood, and street food.

It could be any beach in Italy, but it’s not: it’s a Sicily beach. And that means brilliant blue water (protected in a shallow bay in this particular spot), soft sand, stunning scenery (that’s Mount Monaco looming in the background), some of the best food in all of Italy, and the inimitable cross-cultural soulfulness that pulls so many travelers, Italians and foreign alike, to Sicily. It’s the epitome of the Italian beach experience, whether you’re Italian or not.

CyclingThe 7 Best Italy Wine Tours for Cycling Your Way Through Vineyards
Tagged
Beaches and Islands Outdoor Sardinia, Italy Sicily, Italy
What did you think of this story?
Meh
Good
Awesome