Traditional Chinese art tends to be associated with watercolor mountainscapes or inky calligraphy, but with a 3,000-year-old history, China has a huge array of artistic traditions. While the earliest of Chinese arts included painting, calligraphy, and bronze work, subsequent centuries would see the development of ornate jade sculptures and glazed pottery and ceramics. Beijing, being the home of the emperor, attracted the finest artisans from across the country to pamper the imperial family. The palatial arts grew to include intricate silk embroidery, inlaid filigree, ivory carving, and carved lacquer.

While the imperial court relished in the most opulent of furnishings, everyday Beijingers developed their own iconic folk arts, such as paper cutting, figurines made out of a flour-based clay, or “inside painting” — tiny paintings on the inside of snuff boxes. Whether you’re moved by the elegant minimalism of calligraphy or awed by the painstaking details of cloisonné, these are the best places in Beijing to marvel at traditional Chinese art. 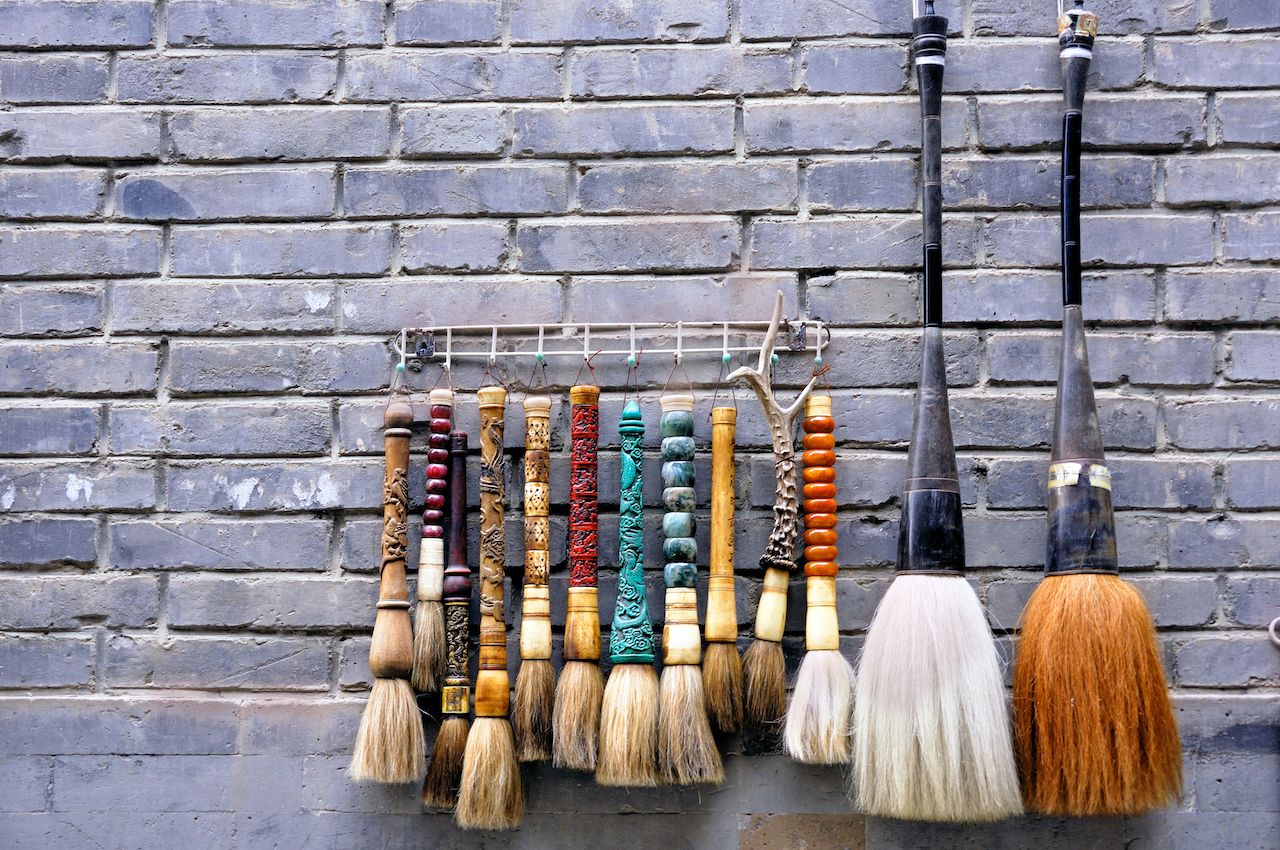 Liulichang was once the site for a venerable glaze kiln that made tiles for palaces and temples during the Yuan and Ming dynasties. For a while afterward, the area was a well-known spot to buy antiques and curios, but recently, the 2,600-foot-long stretch is an emporium for traditional art galleries and supplies. An estimated 200 galleries and stores, with giant sheep hair paint brushes dangling outside their windows, can be found on this creative street.

As an art supply locality, you can also find intricately carved inkstands (used for mixing paints) and jade stamps that serve as artist signatures. If you’re looking to take something home with you, stores will custom engrave a jade stamp, or you can pick out a decorated snuff bottle with your zodiac animal. Liulichang is also a great place to see art in action — artisans are often working on painted fans and snuff boxes on the premises. 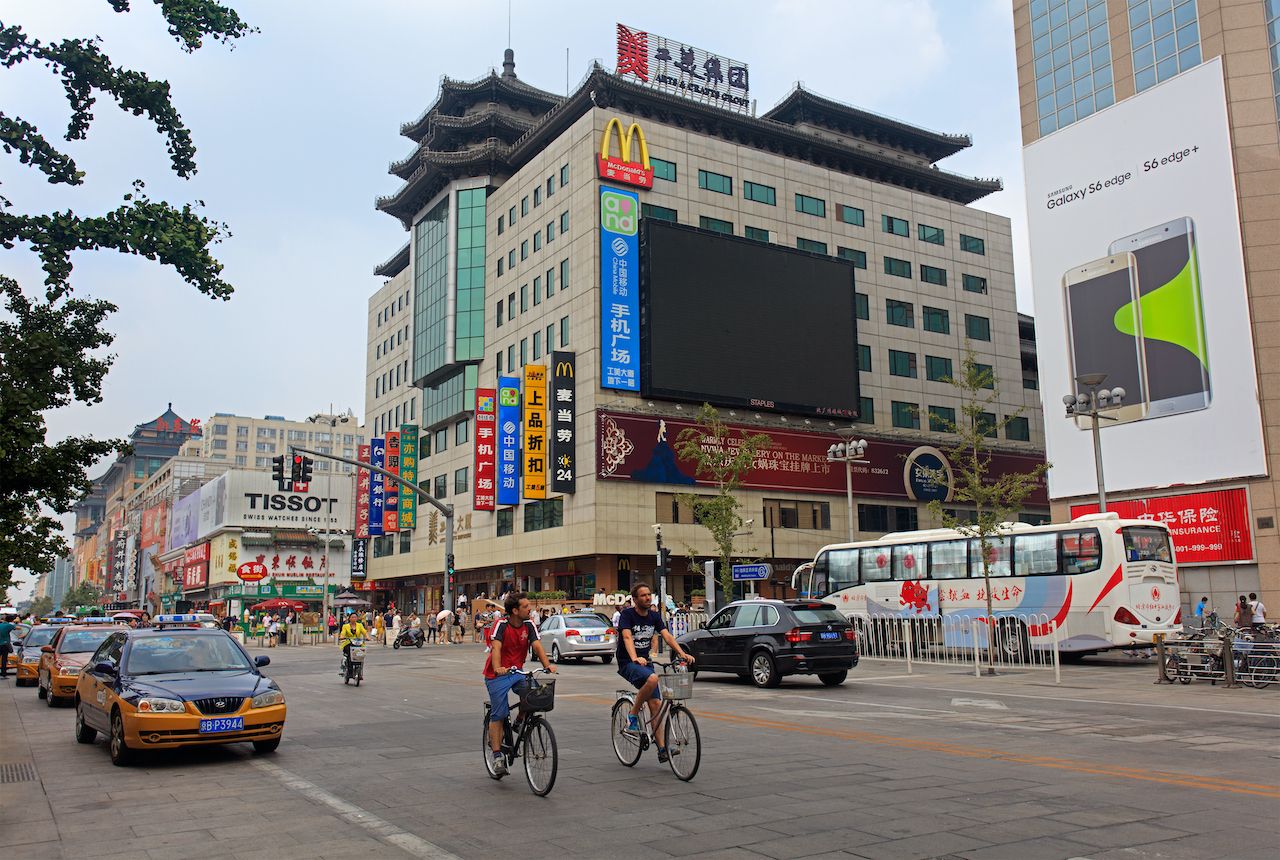 On Wangfujing, Beijing’s main commercial street, you’ll find an entire mall dedicated to the fine arts. The mall was founded in 1954 by the Chinese government and as such was given the status of “recognized cultural heritage” store. Many of the grandmasters of the fine arts sell their work here, there are cloisonné vases the size of a human, elaborate hand-embroidered illustrations, and delicate inlaid filigree touched off with precious gemstones.

The bottom floor sells gold jewelry, as well as Beijing Olympic mementos, while the traditional arts are on the second, third, and fourth floors. The top floors sell silk textiles. Since the Wangfujing Art Emporium promises quality at a prime location, expect some inflated prices. 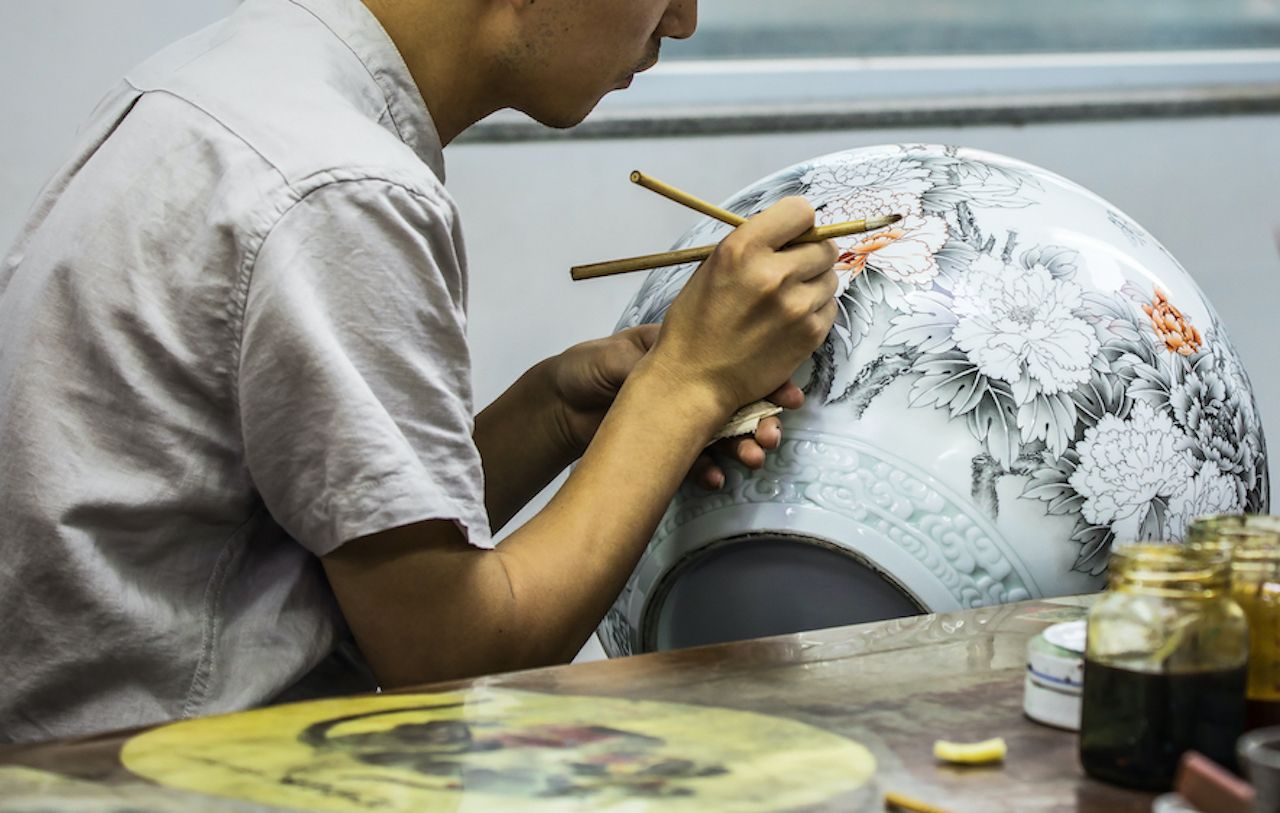 Literally translated as “hundred crafts house,” this space was opened by the Chinese government in an effort to preserve China’s rich artistic heritage in a modernized capitalist economy. Baigongfang is probably the best place to see masters at work as many of the 30 or so storefronts also serve as workshops. Ateliers specialize in traditional arts and crafts such as intricate paper cuttings, clay dioramas, inside painting, engraved lacquer, wood and ivory carvings, and cloisonné to name a few. The building also hosts demonstrations and workshops on the third floor, and the fourth floor has a large exhibition on silk. Visitors can see live demonstrations of the production process and purchase garments to take home. 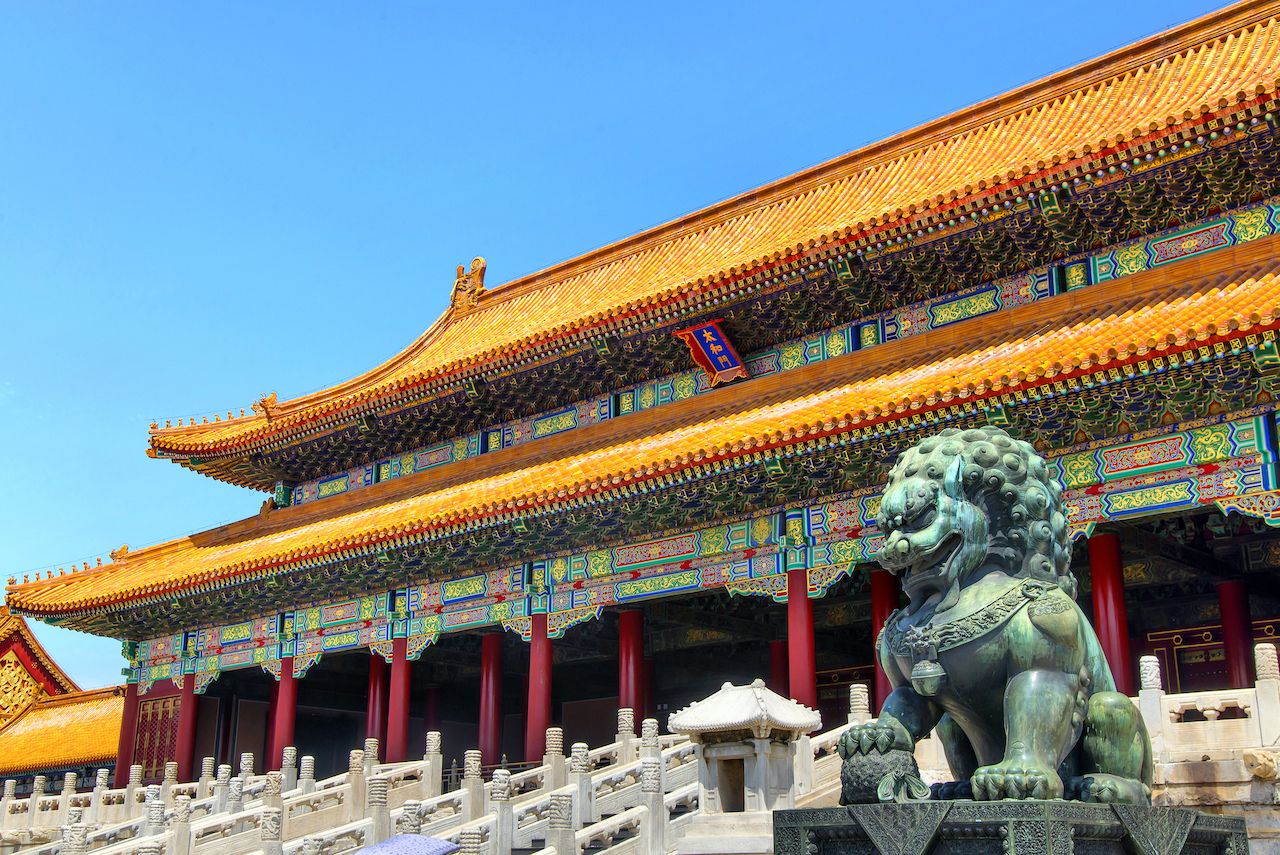 The Forbidden City, also known as the Palace Museum, is a massive building complex that housed the imperial family during the Ming and Qing Dynasties. Along with its stately red and gold architecture, the Forbidden City has a whopping collection of a million historical relics. Aspects of this colossal collection are housed in frequently changing exhibitions, but the permanent Treasure Gallery is the most worthwhile stop. The exhibition has the finest of antique ornaments that would have adorned the royal family’s homes, such as gold enamelware inlaid with precious gems, opulent pieces of cloisonné, gargantuan jade sculptures, and jewelry worn by empresses. 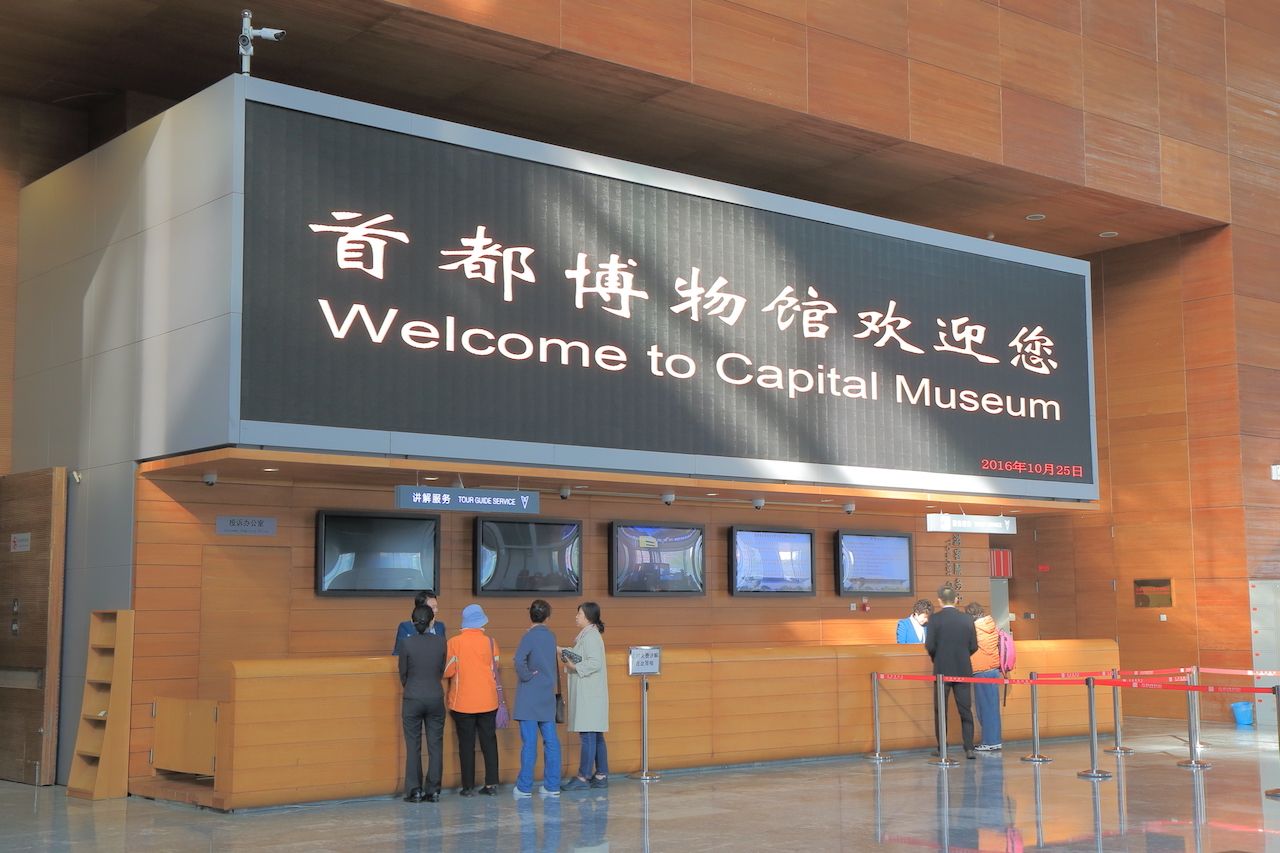 The Beijing Capital Museum is the place to go to be acquainted with Beijing’s history, culture, and folk life. The Bronze Exhibition Hall houses a large collection of jade, bronze, calligraphy, and paintings on each floor, and the main exhibition hall is home to porcelain items and other relics. On the top floor, visitors can step into traditional Beijing’s folk life and see many crafts, such as Peking opera ornaments, dioramas made out of flour clay, lanterns, or paper crafts. The museum is free to visit and is not very frequented, so you’ll have plenty of space to explore and enjoy. 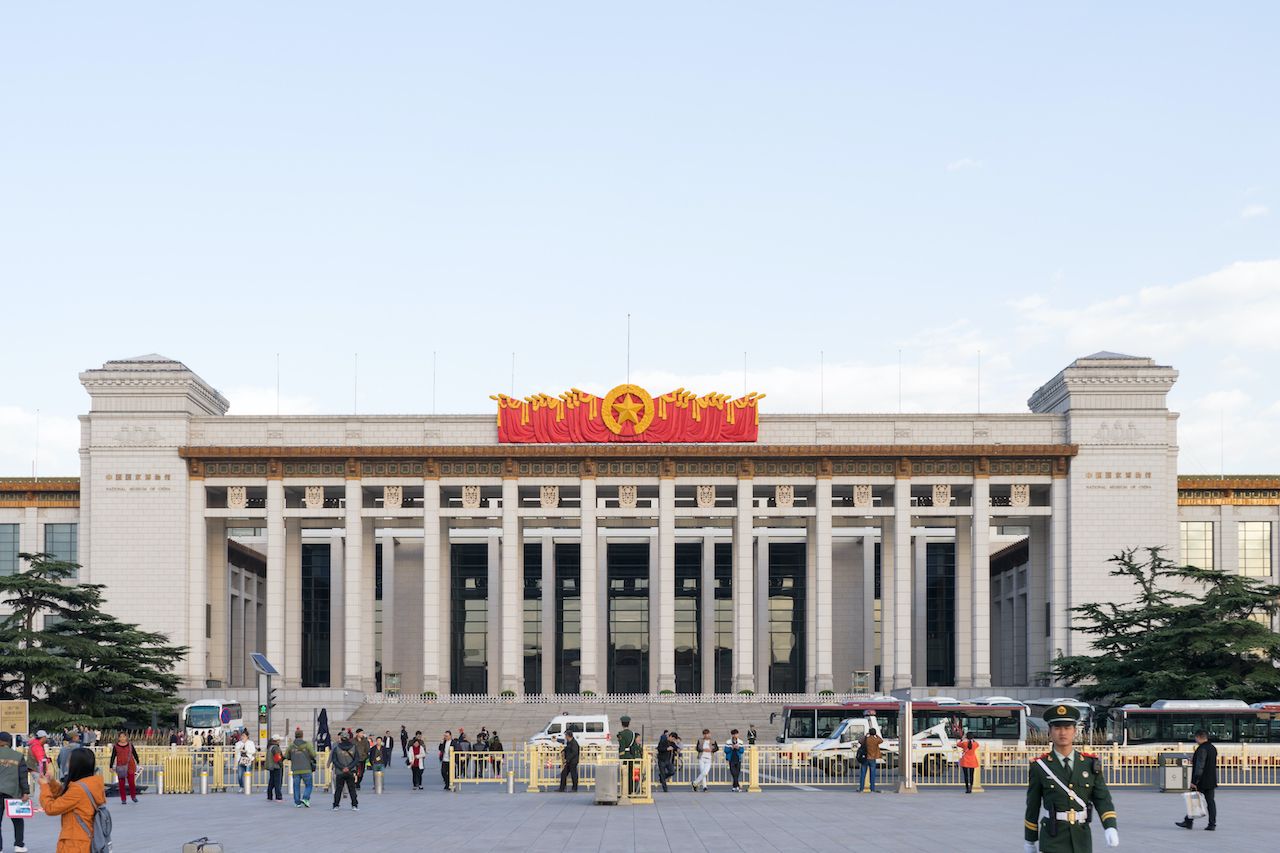 Adjacent to Tiananmen Square, the National Museum of China is a 16-acre behemoth housing ancient artifacts from across the country. Like the Palace Museum, the national museum has a collection of over one million items and claims to be the second most-visited museum in the world after the Louvre.

Sculptures in the main hall have a stoic, nationalistic feel while upstairs exhibition rooms have a variety of temporary exhibits ranging from ancient stone carvings to contemporary art. Probably the most noteworthy of the permanent exhibitions is the Ancient China collection that displays thousand-year-old bronze cauldrons, ancient money, and ancient jade sculptures. Visitors can also see the evolution of ceramics beginning around 2,000 years ago, as well as exhibitions showcasing ancient pottery and Buddhist artwork. 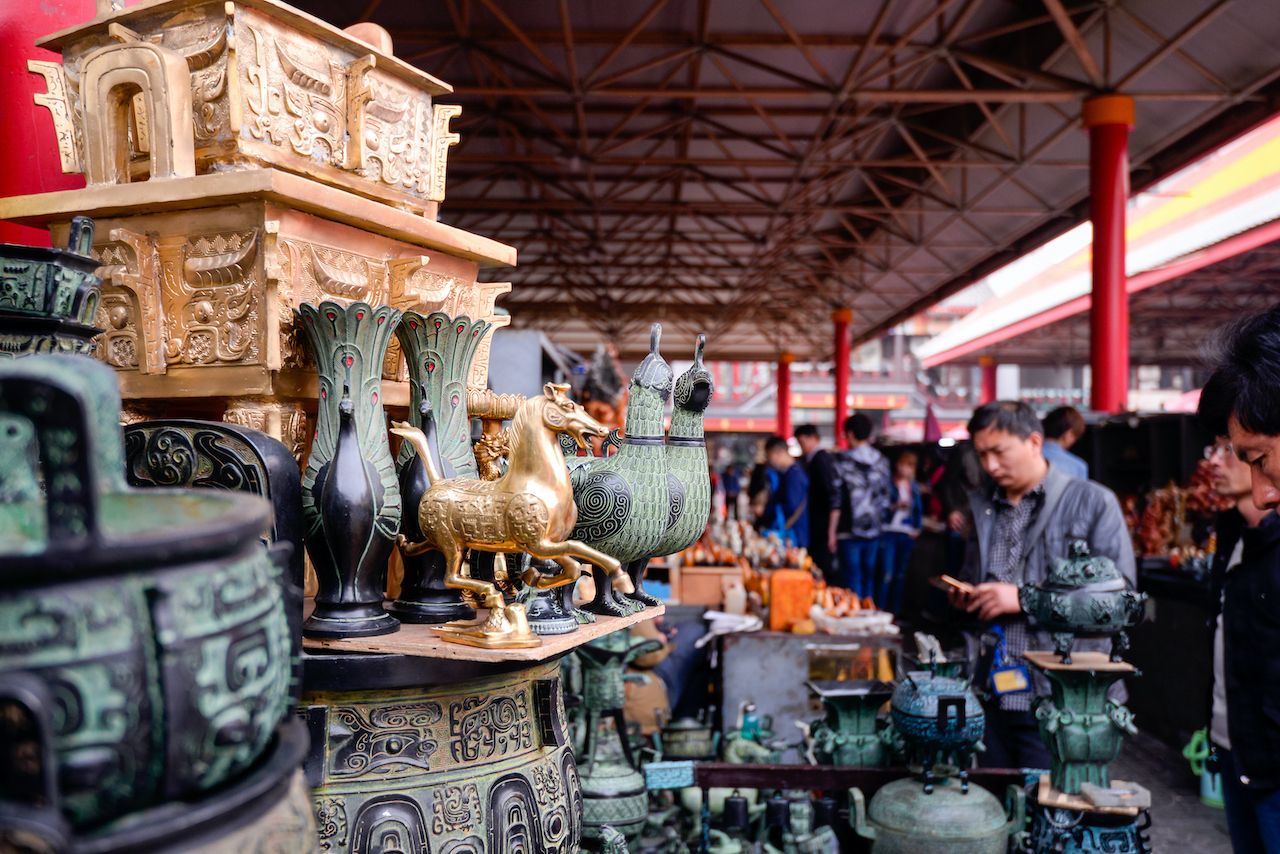 Panjiayuan Antique Market has stall after stall of what sellers claim to be authentic antique ceramics, cloisonné, jewelry, and curios. If you’re not looking specifically for antiques, the market also has vintage books and posters, wooden furniture, jewelry, precious stones, ethnic clothing, paintings, and large stone carvings in case you needed to decorate your own palace. More formal stores around the market will sell pricier, better-quality items, while anything goes at the stalls — if you know how to barter you can buy souvenirs at a cheap price. The market is open every day, but go on a weekend to catch more vendors. 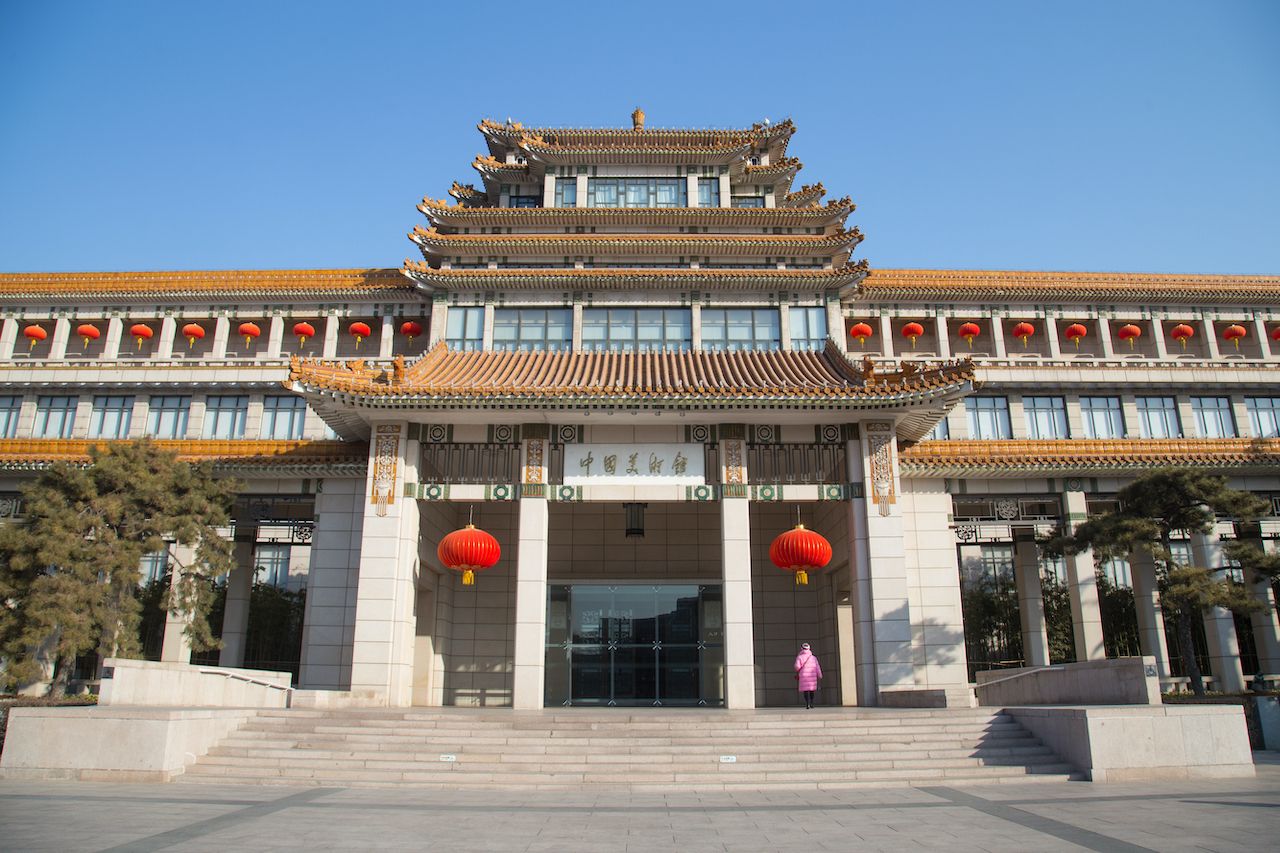 The National Art Museum of China, or NAMOC, has a huge collection of Chinese arts, from ancient to contemporary, imperial to folk. With six floors and 21 exhibition halls, it’s a great introduction to all aspects of Chinese life, from learning about the communist revolution through oil painting to celebrating folk life via whimsical paper cut-outs. Notable permanent exhibitions showcase traditional Chinese paintings, oil paintings, sculpture, prints, pottery, and puppetry. NAMOC also hosts many changing exhibitions. 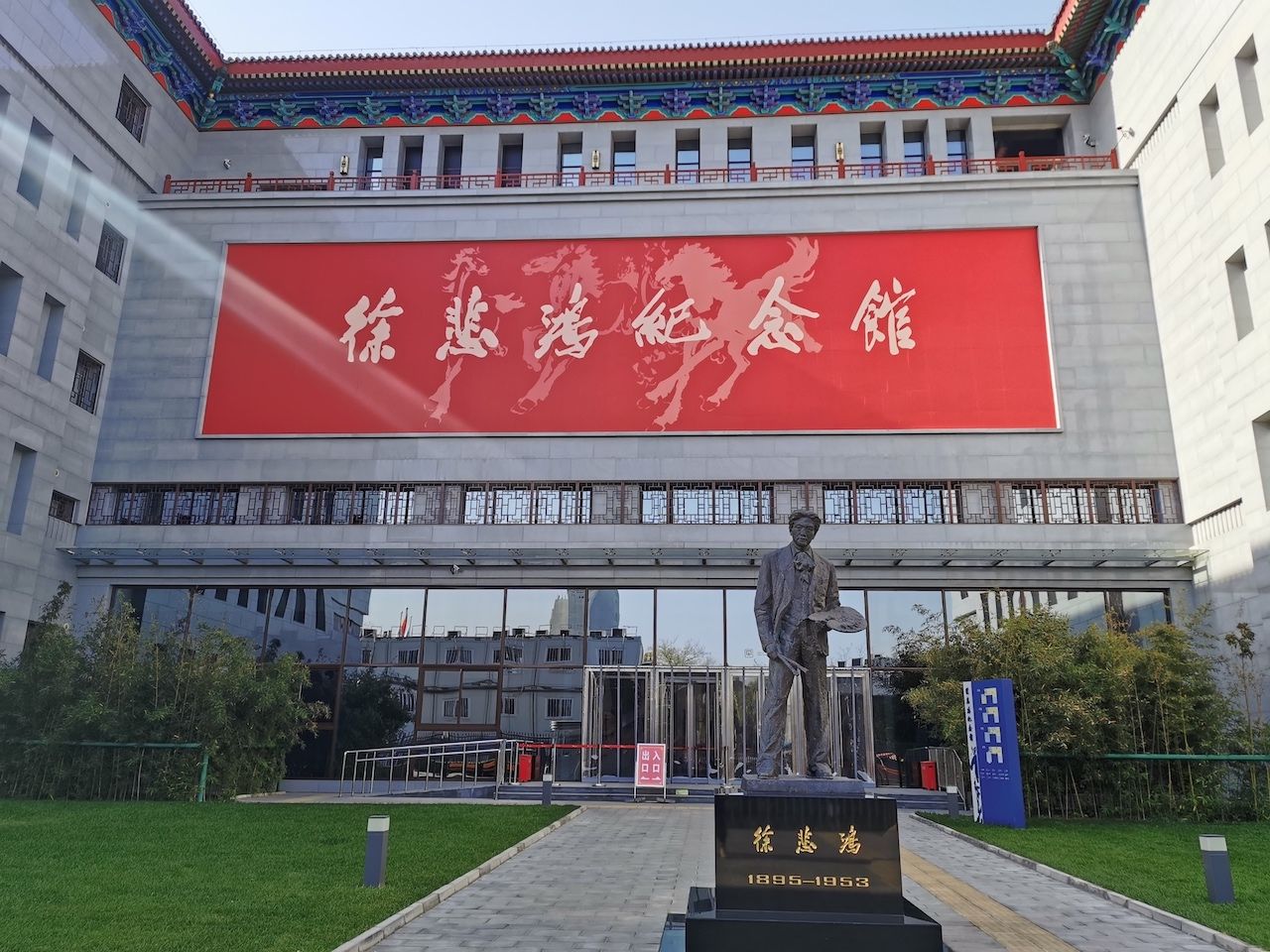 When in China, look out for murals of black watercolor stallions adorning the sides of buildings and popular squares. These murals are a nod to Xu BeiHong, probably the most revered painter in Chinese history.

The artist is best known for combining traditional techniques with Western composition to create paintings symbolic of a modernized China. Xu BeiHong was a huge proponent of art education and was the first president of the Central Academy of Fine Arts. Having studied oil painting in France for over a decade, he demonstrates a complete mastery of his craft as he can fluently move between different styles.

Following his death in 1953, Xu BeiHong’s family donated a large collection of his work to the Xubeihong Memorial Hall. Upper floors exhibit his better-known works of traditional Chinese paintings while the lower flows showcase the depth of his talent with oil paintings, portraits, sketches, and nationalistic works.

MuseumsThe Ultimate Guide To Spending One Day in Beijing’s Forbidden City
Tagged
Art + Architecture Insider Guides
What did you think of this story?
Meh
Good
Awesome