Walking north across infamous Tiananmen Square under the constant watch of security cameras, you’ll soon find yourself staring right into the eyes of Mao Zedong. The framed picture of the leader of the Communist revolution hangs high on Tiananmen Tower, through which you’ll access the Meridian Gate leading to the Forbidden City, welcoming tens of thousands of daily visitors who want to get a glimpse of China’s long-gone imperial past.

Within its six centuries of history, Beijing’s Forbidden City has turned from being the residence of Ming and Qing emperors to being one of the most visited open-air museums in the world. One of China’s top attractions together with the Great Wall, the Forbidden City is a complex consisting of 980 buildings that were once inaccessible to commoners.

Known today as the Palace Museum, the impressive size of this red and yellow fortress is intimidating. This condensed guide is meant to help you make the most out of your day in the Forbidden City, giving you ideas on how to plan your visit and navigate this huge palace complex.

What is the Forbidden City? 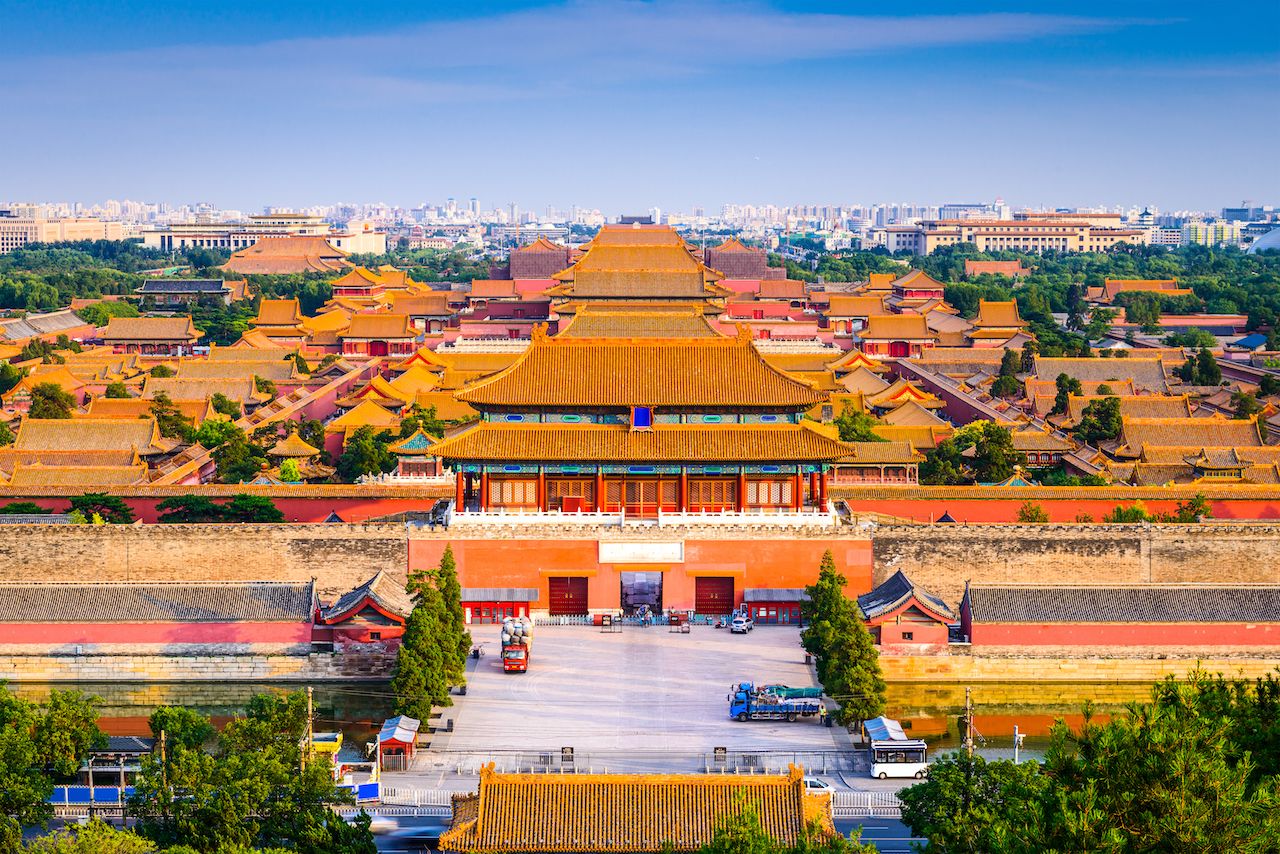 Located in the very center of the Chinese capital city, Beijing’s Forbidden City is a treasured remnant of China’s imperial past. Today, the fortified citadel that for centuries housed the emperors, their families, and their servants has become a UNESCO-protected historical site known as the Palace Museum.

With nearly 15 million visitors every year, the complex is far from “forbidden” these days. Its name, however, reminds us of an era during which a ticket was not enough for entering the 26-foot thick walls of the fortress. During the Ming and Qing dynasties, only the relatives of the emperor and government officials were allowed in, while commoners would be punished with death for trespassing.

Completed in 1420 under the orders of the Ming dynasty’s Yongle emperor, the Forbidden City has been the center of Chinese political power for almost 500 consecutive years. Millions of workers were employed in the construction of the palaces under the supervision of architect Kuai Xiang, although most of the architectural elements visible today have been damaged and restored over time.

The Forbidden City hosted 24 different emperors until 1911, when Puyi, the last emperor, was ordained to abdicate by the revolutionary forces. Luckily for us, the opposers of imperial power that governed China in the following decades recognized the cultural importance of this architectural wonder, preserving it for the world to see and appreciate. It was declared a key historical relic by the Chinese government in 1961 and a World Heritage site by UNESCO in 1987.

The best time to visit the Forbidden City

Beijing’s Forbidden City sees millions of tourists coming from all over China and abroad every year. Avoiding crowds is no easy task, but because the complex covers 178 acres of ground, you will definitely be able to find a quiet spot.

The high season is from the beginning of April to the end of September. For the best weather, plan your visit between March and June or between September and October. The middle of summer can be very hot, white you are likely to find fog during cold winter days.

Avoid the days around Chinese holidays such as the Spring Festival, also known as Chinese New Year (date varies from mid-January to early February), National Day (October 1), and the Mid-Autumn Festival (date varies from mid-September to early October) at all costs. During these festivities, the amount of visitors increases dramatically and navigating through massive crowds can be a gong show.

How to get to the Forbidden City, price, and hours of operation 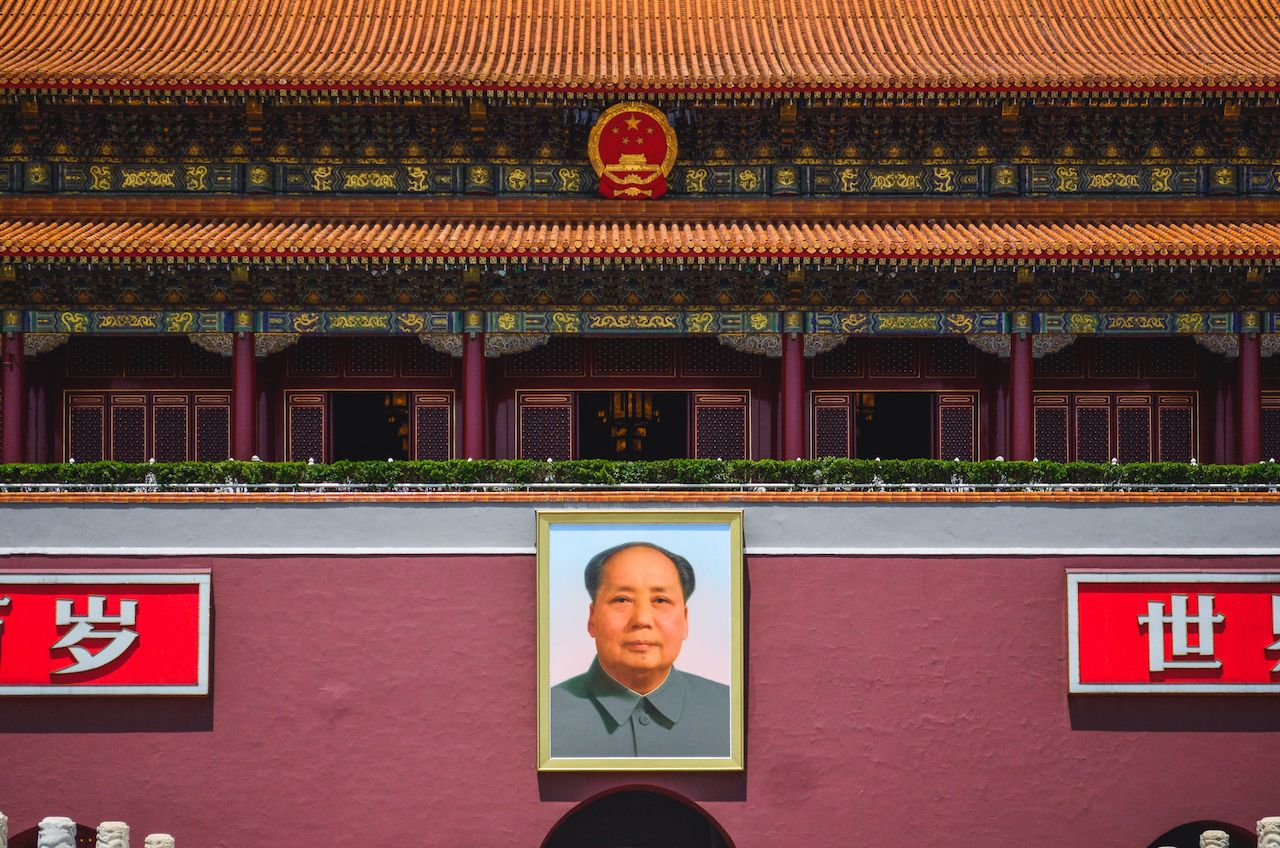 The Forbidden City is impossible to miss. It is located right in the heart of Beijing, at the northern edge of Tiananmen Square. Tiananmen Square East is the closest subway station, steps away from the entrance. If you can’t spot Mao’s face from a distance, you will find English language signs guiding you as soon as you emerge from the station.

When visiting the Palace Museum, make sure you bring your passport along. You will have to show it both at the security checks when you enter Tiananmen Square and when purchasing your entrance ticket. The cost of visiting differs depending on when you go. In the high season (April 1 to October 1) tickets cost 60 Chinese yuan (about 8.50 USD), while in the low season the price goes down to 40 yuan (5.70 USD).

Since 2015, the Chinese government has set the limit of daily visitors to 80,000. If you can, buy tickets in advance through the official website, however, patience is key unless you can read Chinese. Keep in mind that booths at the Meridian Gate only sell same-day tickets.

Children enter for free and visitors over 60 receive a 50 percent discount. Audio guides are available for an additional 40 yuan (5.70 USD) and there are luggage storage facilities. The Forbidden City opens at 8:30 AM and closes at 5:00 PM in the high season and 4:30 PM in the low season. It is closed on Mondays.

How to organize your visit 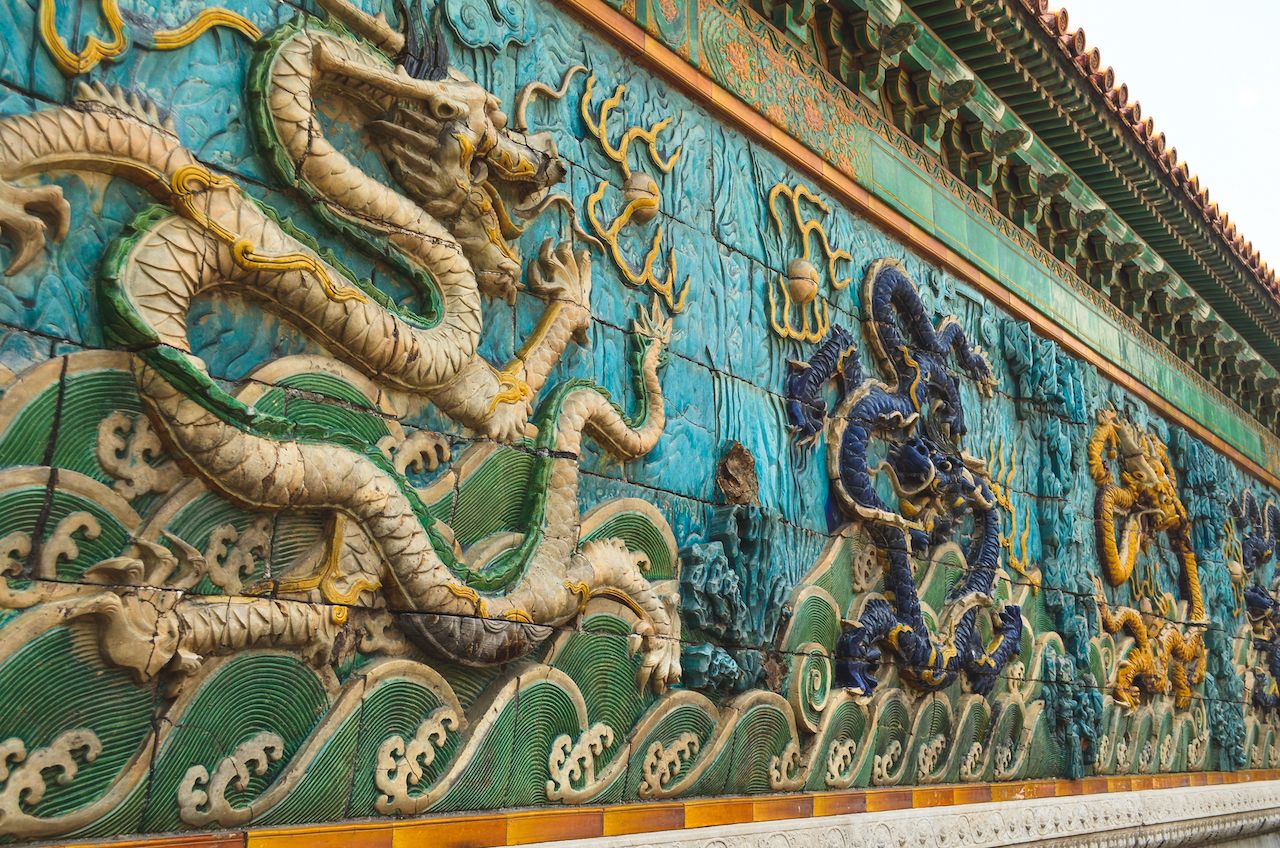 Hidden behind the thick saffron-colored walls that form the fortress stand 980 buildings that contain nearly 9,000 rooms. While most of the interior spaces are not accessible to the general public, such numbers give you an idea of the sheer size of the Palace Museum. One can easily spend a full day exploring this ancient citadel, but if that seems too much, allow yourself a bare minimum of four hours to visit.

Once you cross the main gate you can roam freely through the courtyards, however, you’ll notice immediately that the vast majority of visitors tend to follow a similar path along the central alley. The main artery of the Forbidden City travels south to north from the ticketing booths at the Meridian Gate (Wumen) toward the Gate of Divine Prowess (Shenwumen). While crowds are hard to avoid, if you don’t enjoy being part of a massive stream of people, you can choose to deviate toward either side.

The city is split between two main parts. There is the wide outer court, also known as the southern section, where official ceremonies, weddings, and military parades used to be conducted, and an inner court, or northern section, that forms the residential area where the emperors and their wives used to live. The classic route for visitors covers these two sections and can be done in about three hours. 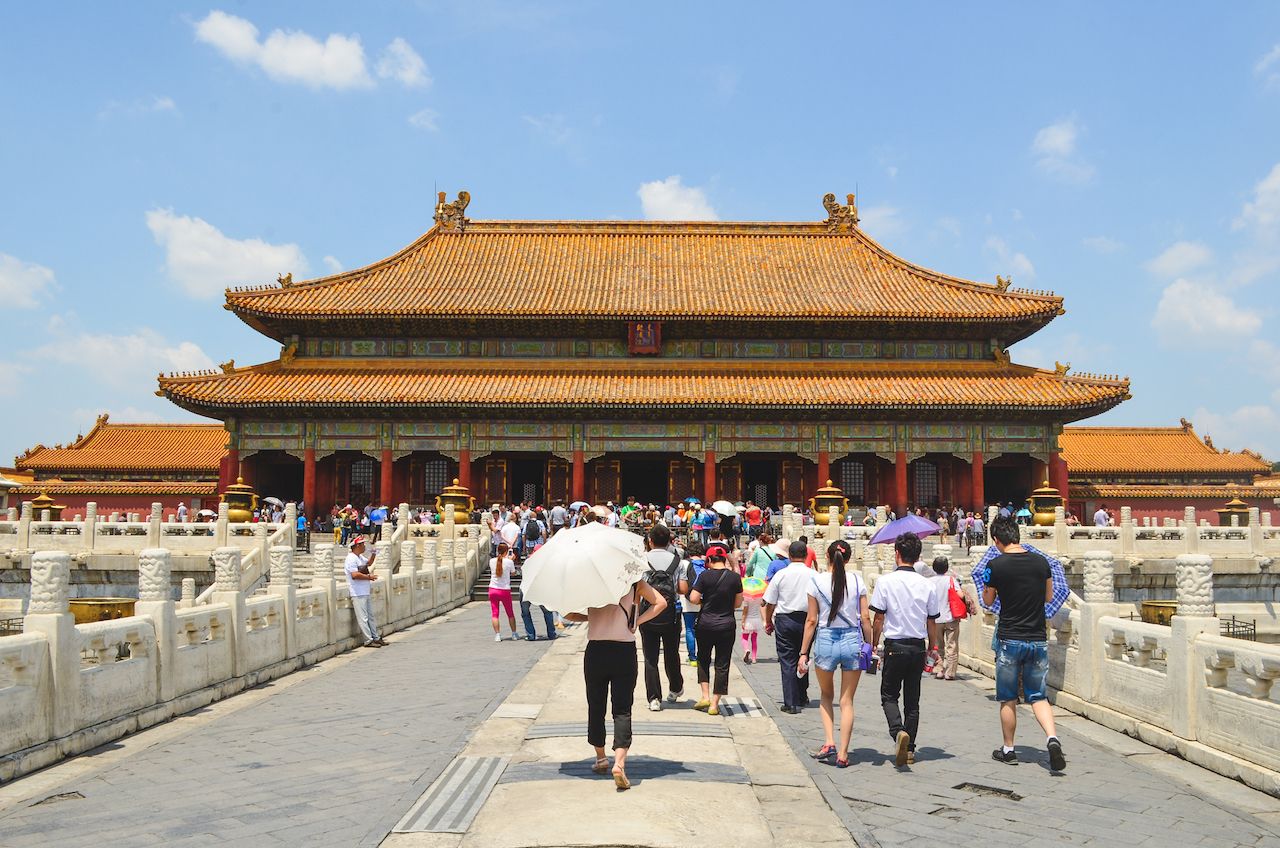 When entering from the Meridian Gate, you’ll find yourself in front of the Golden Water River. By crossing it on one of the five available bridges, you’ll reach the Gate of Supreme Harmony, where three palaces adorned with white-marble terraces and tiled roofs will appear in all of their majesty. The Hall of Supreme Harmony is the most impressive of the three outer court structures because of its dimensions and intricate woodwork. The Hall of Central Harmony and the Hall of Preserving Harmony are smaller, but nevertheless awe-inspiring. 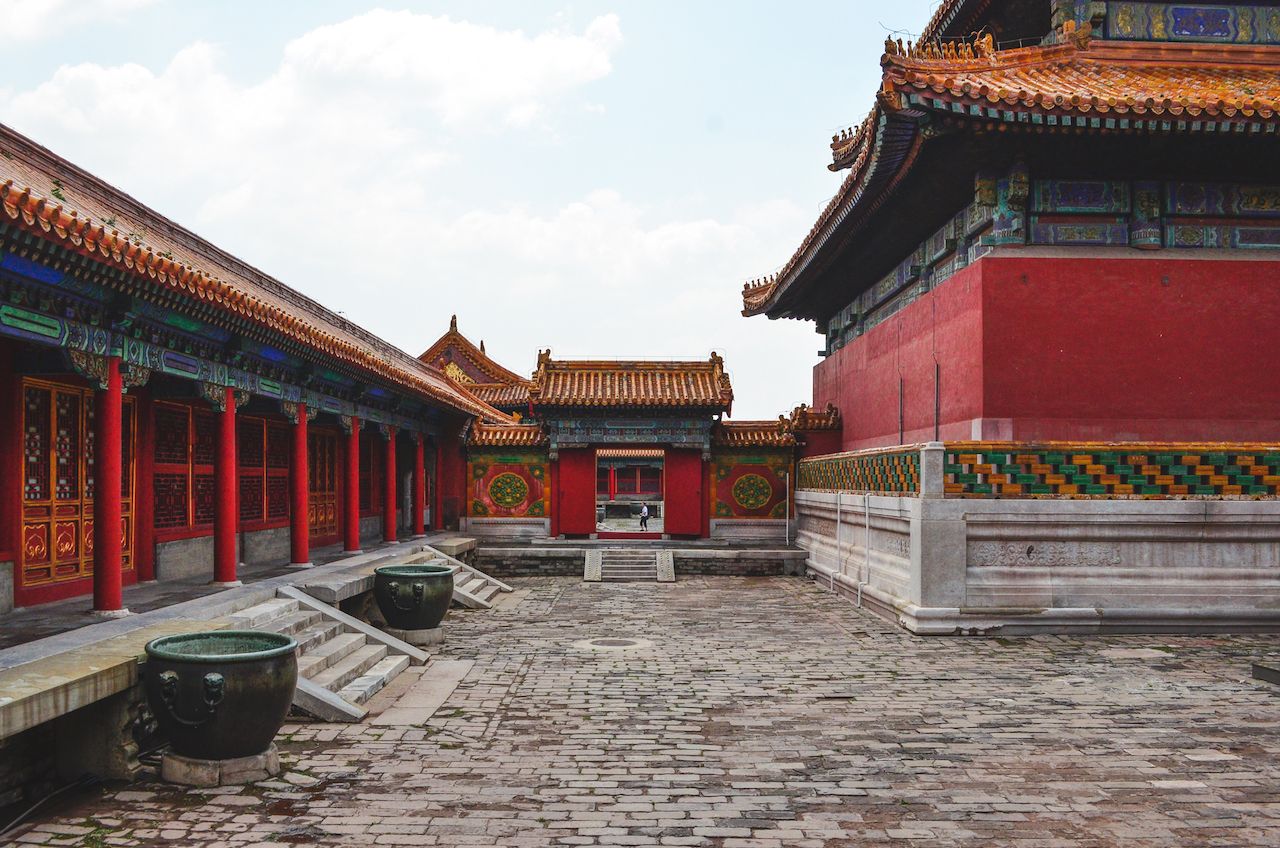 Once you enter the inner court through the Gate of Heavenly Purity, you’ll discover the Palace of Heavenly Purity, the Palace of Earthly Tranquility, and the Hall of Celestial and Terrestrial Union. These three structures have changed their function over the course of the centuries. The emperors of the Qing dynasty would use the Palace of Heavenly Purity as an audience hall, while during the Ming era it became the emperor’s official residence. Similarly, the Palace of Earthly Tranquility switched from being the residence of the empress to a space dedicated to spiritual practice. The Hall of Celestial and Terrestrial Union used to host the celebrations for the empress’ birthday. Among the most intriguing attractions of this last building is the wooden chime clock made in 1798, which has been continuously running for over two centuries.

Whatever you do, don’t skip the Treasure Gallery, a museum inside the Forbidden City. Located near the Palace of Tranquil Longevity, this gallery hosts a large collection of everyday objects used by the imperial families of the Qing dynasty. From clothes to jewels to daily utensils, the Treasure Gallery provides insight into what life used to be like in the Forbidden City.

The eastern and western wings 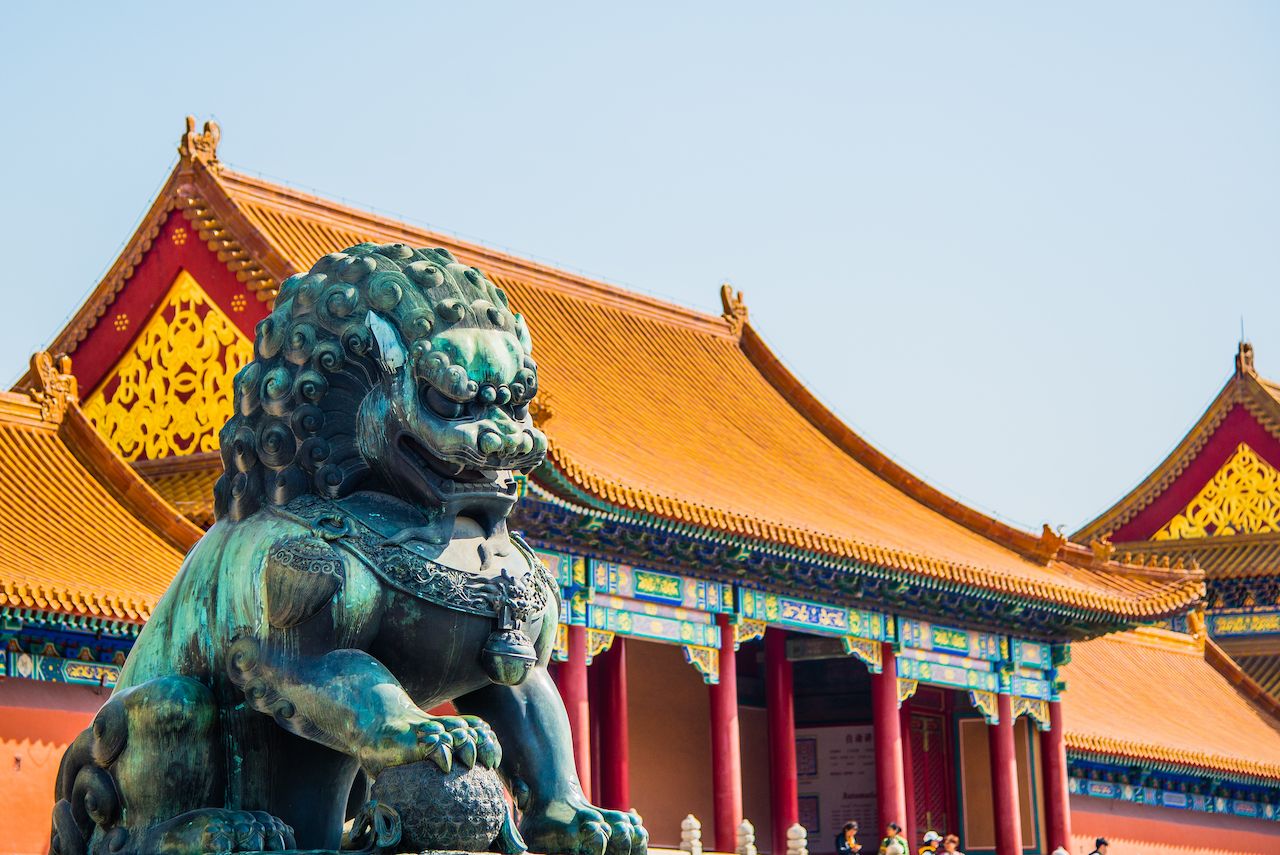 Mirroring the eastern wing is the western section of the Forbidden City with its own six palaces. Here you will find another residential complex meant to house the emperor’s wives and concubines, and just steps away is the Hall of Mental Cultivation built by Emperor Jiajing in the 16th century. Originally constructed as a space for the emperor to rest, the Hall of Mental Cultivation became a full-time residency of the rulers in the 18th century. Here you’ll be able to view what is considered the emperor’s “office” — a room with a throne placed behind a desk.

If you have more time 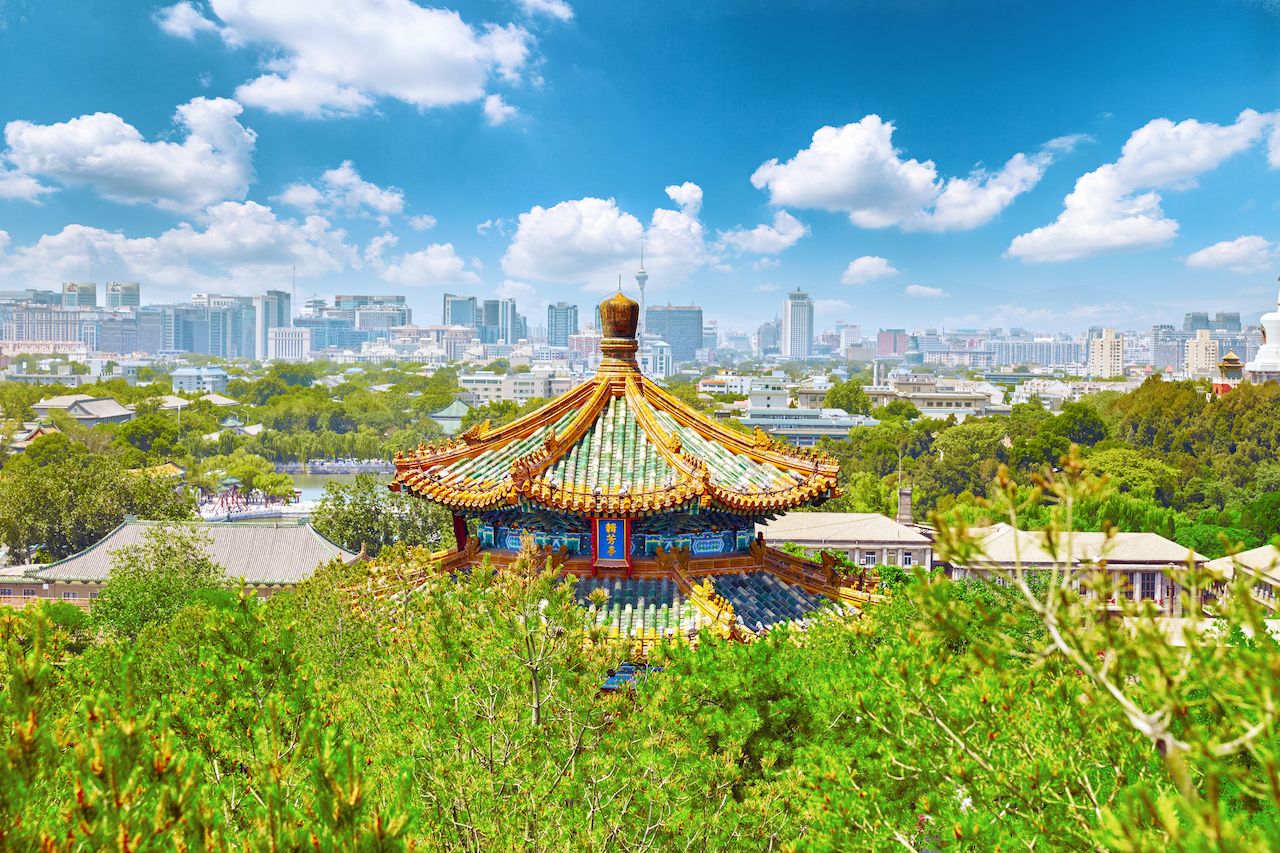 If you have time at your disposal, check out Jingshan Park for incredible views over the Forbidden City. This patch of green is located on the artificial Jingshan Hill behind the palatial complex, opposite the northern gate where you exit the walls.

During the Ming and Qing dynasties, this 57-acre area used to be an imperial garden filled with fruit trees and pavilions. Jingshan Park was opened to the public in 1928, and was renovated with paved walking paths two decades later.

On top of offering stunning views of the city, the park is an ideal opportunity for a break from Beijing’s traffic.

During the high season the park closes at 9:00 PM. An entrance fee of 2 yuan (0.30 USD) is collected at any of the four entrances.

Archaeology10 Things You Need To Know Before Visiting the Great Wall of China
Tagged
Culture Museums Trip Planning Beijing, China
What did you think of this story?
Meh
Good
Awesome

May 13, 2022 Christine Pundavela
✖
travelstoke
Download the mobile app
stoked by