There’s a common line of thinking that you shouldn’t eat American food or go to American-themed restaurants abroad. Well, people who follow that clearly don’t know what it’s like to go two weeks without classic diner fare, specialty hot dogs, the very specific styles of barbecue in the United States, or American pie.

Admittedly, American-themed restaurants can be hit or miss. Some are gimmicky, with photos of ex-presidents lining the walls and American flag toothpicks in every sandwich. Others go for a more retro Americana theme, to make you feel like you’ve stepped onto the set of Happy Days. Yet there are some American restaurants around the world that nail it and can rival what you’d find stateside.

Whether you’re there for the kitschy decor or a meal that reminds you of your local diner, these are some of the best places to get a taste of home while abroad. 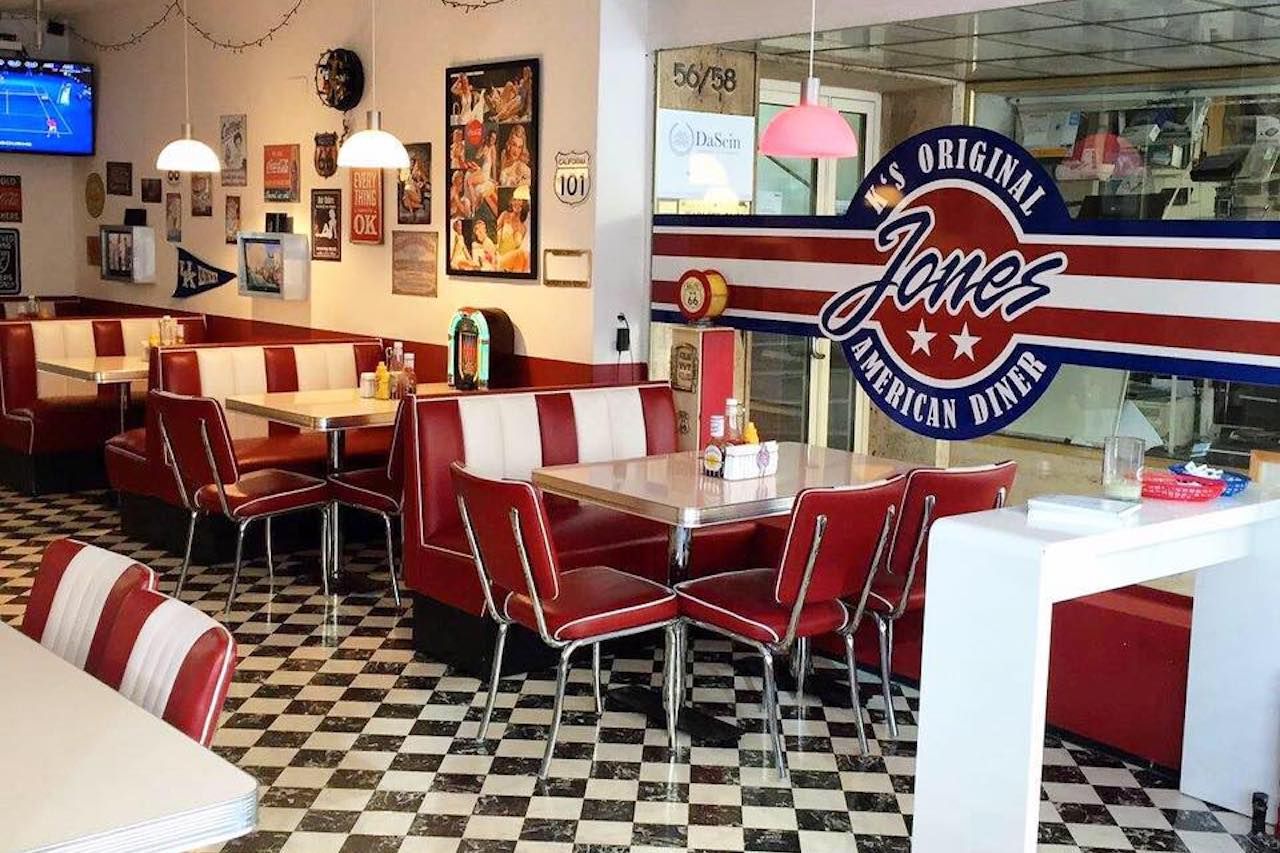 I had been in Munich for five days. My meals were pretty much a revolving door of bratwurst, knödel, schnitzel, Spätzle, and chanterelle mushrooms, and as much as I enjoyed the heavy German fare, I needed a change. That’s when I saw the glowing sign of Jones – K’s Original American Diner around the corner from my hotel, and stumbled in like a parched wanderer in the desert. The diner’s 50s theme didn’t feel gimmicky, but instead true to how retro diners in the US actually look. There was an old jukebox, Rt. 66 paraphernalia on the walls, photos of pinup girls, and those red and white booths. Perhaps most importantly, the menu was extensive and had all the classics, including mozzarella sticks, philly cheesesteak, and apple pie. I went back two nights in a row, and I’m not ashamed to admit it. 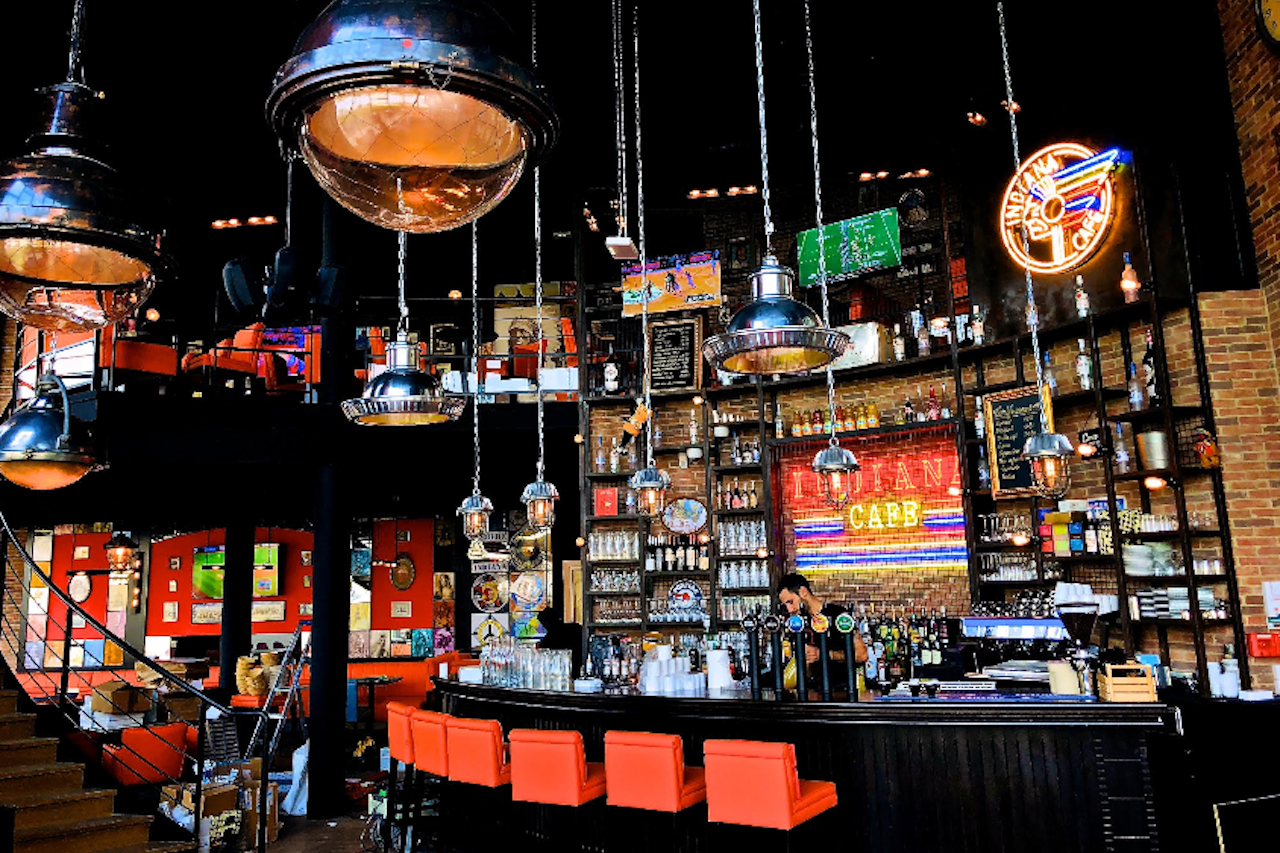 By some accounts, fewer than 50 percent of Americans can name all 50 states. So it’d be unreasonable to expect a Parisian to do so, let alone get the style of food from each state correct. Geographic confusion is really the only explanation for this Indiana-themed Paris establishment that serves primarily Tex-Mex food. As you’re probably aware, Indiana is not known for its Tex-Mex. Indiana Cafe, however, is. The restaurant specializes in fajitas, tacos, burritos, and nachos, Despite the head-scratching menu, the restaurant’s aesthetic, particularly the red-bricked bar, is undeniably American, and you wouldn’t regret coming here for a reminder of home.

The Yellow Rose of Texas in Iquitos, Peru 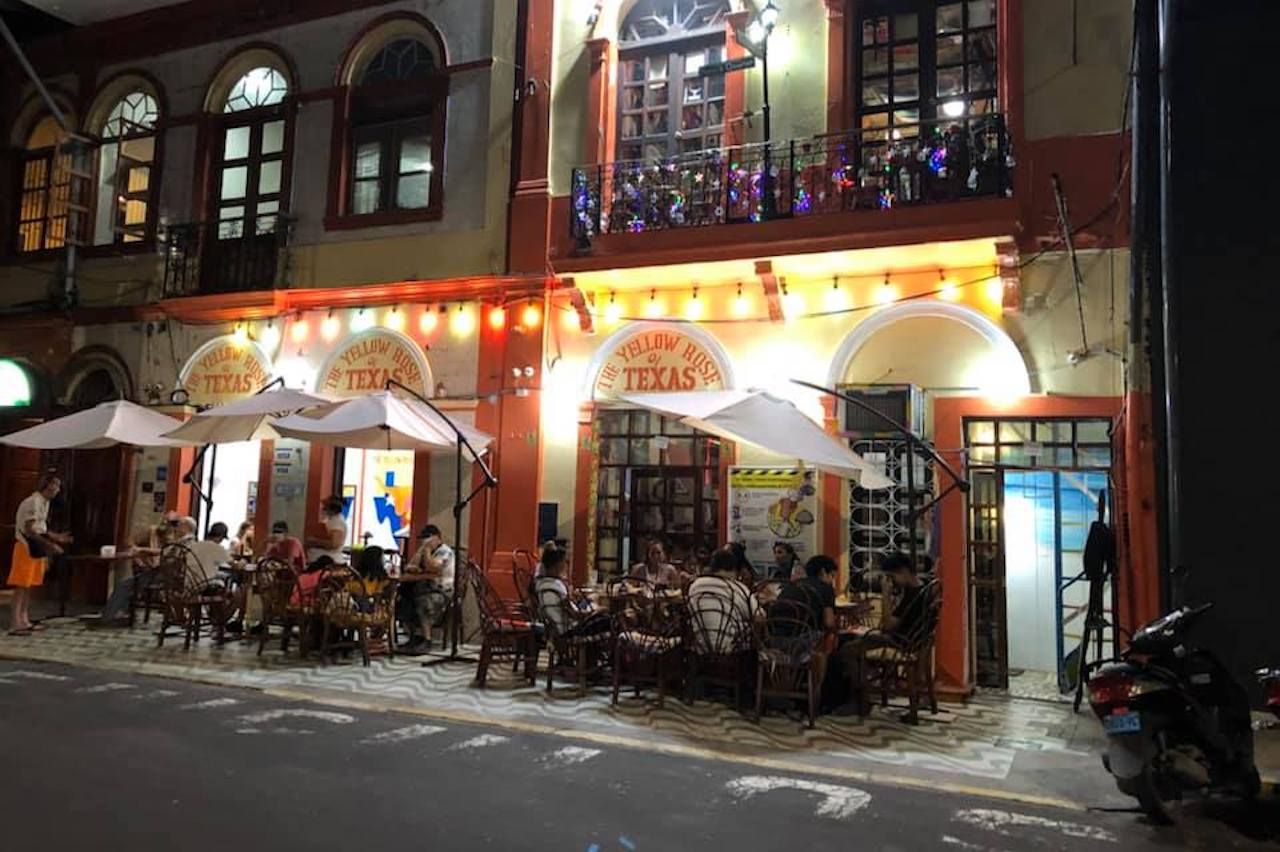 There seems to be a common Texas theme when it comes to American restaurants abroad. The Yellow Rose of Texas in Iquitos, Peru, leans into all things Lone Star State with its Texas-themed restaurant. Here, you’ll find walls covered in posters and jerseys of Texas sports teams, hostesses wearing University of Texas attire, and a “hall with jungle museum.” And no Texas-themed establishment would be complete without a sports bar with a pool table and TVs for watching football (the American version, of course). 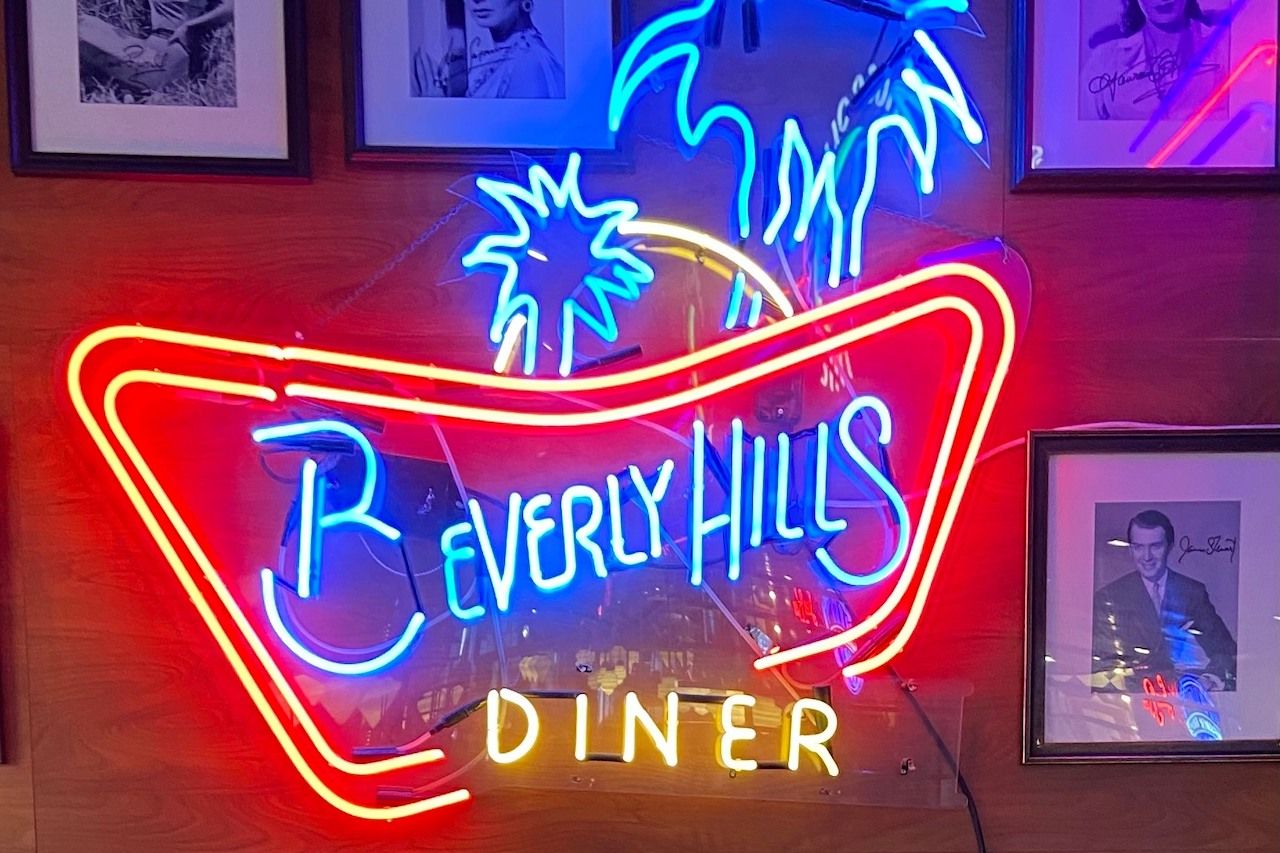 They might not admit it in public, but it appears even Russians enjoy a taste of the good ol’ US of A every now and then. Decorated like a 1950s American diner, the Beverly Hills Diner is an Instagrammer paradise that’s decked out in colorful memorabilia commemorating old-school Hollywood. There’s also a jukebox, and statues of Elvis and Betty Boop join a scaled-down version of Statue of Liberty. The waitstaff even sings and dances as if they’re the cast of Pulp Fiction

. The menu includes omelets, waffles, milkshakes, cheesecake, and — lest you forget you’re in russia — chicken borscht.

The Big Kahuna in Athens 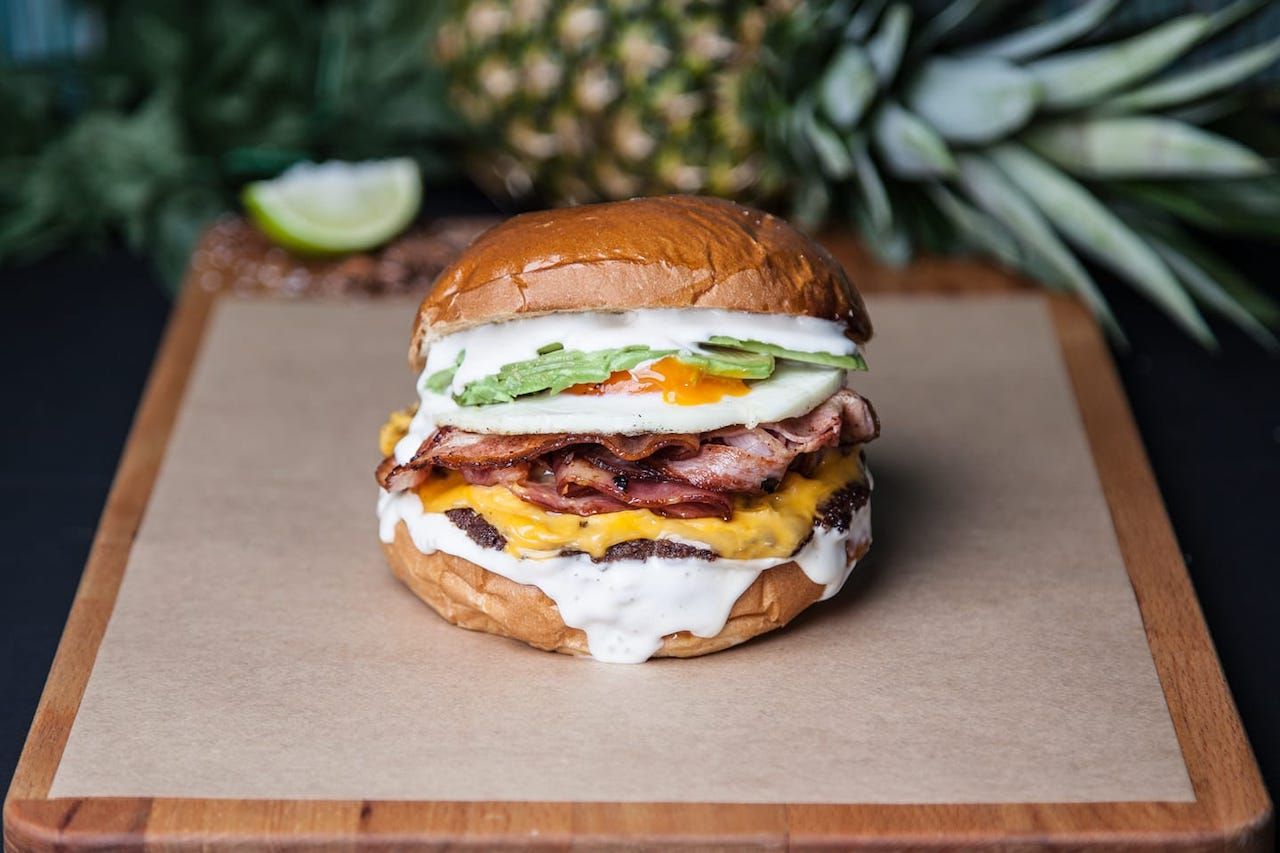 A Hawaiian cafe might seem out of place in Greece, but why shouldn’t a nation with more than 2,000 islands pay homage to a fellow chain of islands? The Big Kahuna is a surfer-themed restaurant that offers traditional American-style burgers, along with a variety of other international options, like duck tacos. The restaurant describes its cuisine as “unorthodox yet revolutionary,” with influences from Hawaii, the Caribbean, Latin America, and Asia. When you stop in for a bite, you’ll feel briefly transported to Oahu thanks to the thatched-roof bar, string lights, and island decor.

Food + Drink19 of Our Favorite Comfort Foods From Around the World
Tagged
Expat Life Restaurants + Bars Peru Athens, Greece Munich, Germany Paris, France
What did you think of this story?
Meh
Good
Awesome