Coral reefs are playgrounds for scuba divers, but like any city park with dilapidated swings and rusty slides, they’re susceptible to wear and tear from those who come to enjoy them. Add in environmental pressures like coral bleaching, rising ocean temperatures, and acute weather, and it’s clear to see why the world’s reefs are at high risk of irreparable damage.

Artificial reefs are one solution to degrading ecosystems that have become both increasingly common and controversial over the past few decades. The idea is simple: Sinking man-made structures such as ships gives small sea creatures like barnacles something to attach to, thereby drawing larger marine life and, ultimately, establishing new habitats.

According to the US Department of the Interior’s website, “Artificial reefs provide shelter, food, and other necessary elements for biodiversity and a productive ocean. This in turn creates a rich diversity of marine life, attracting divers and anglers.” As dive sites, these artificial reefs have the potential to divert tourist attention away from struggling natural reefs.

The practice is still under some scrutiny, however. Critics of man-made reefs cite the issues of pollution, durability, and the fact that shuffling around underwater traffic rather than curbing it remains problematic for wildlife, whether species have made their homes by atolls or wrecks. While the jury is still deliberating on the long-term effectiveness of artificial reefs, destinations ranging from Mexico to Thailand have embraced them, seeing promising growth in their marine populations and creating new underwater attractions for divers.

These are seven of the coolest diving experiences you can have in artificial reefs.

1. Tour an underwater military museum in the Gulf of Aqaba. 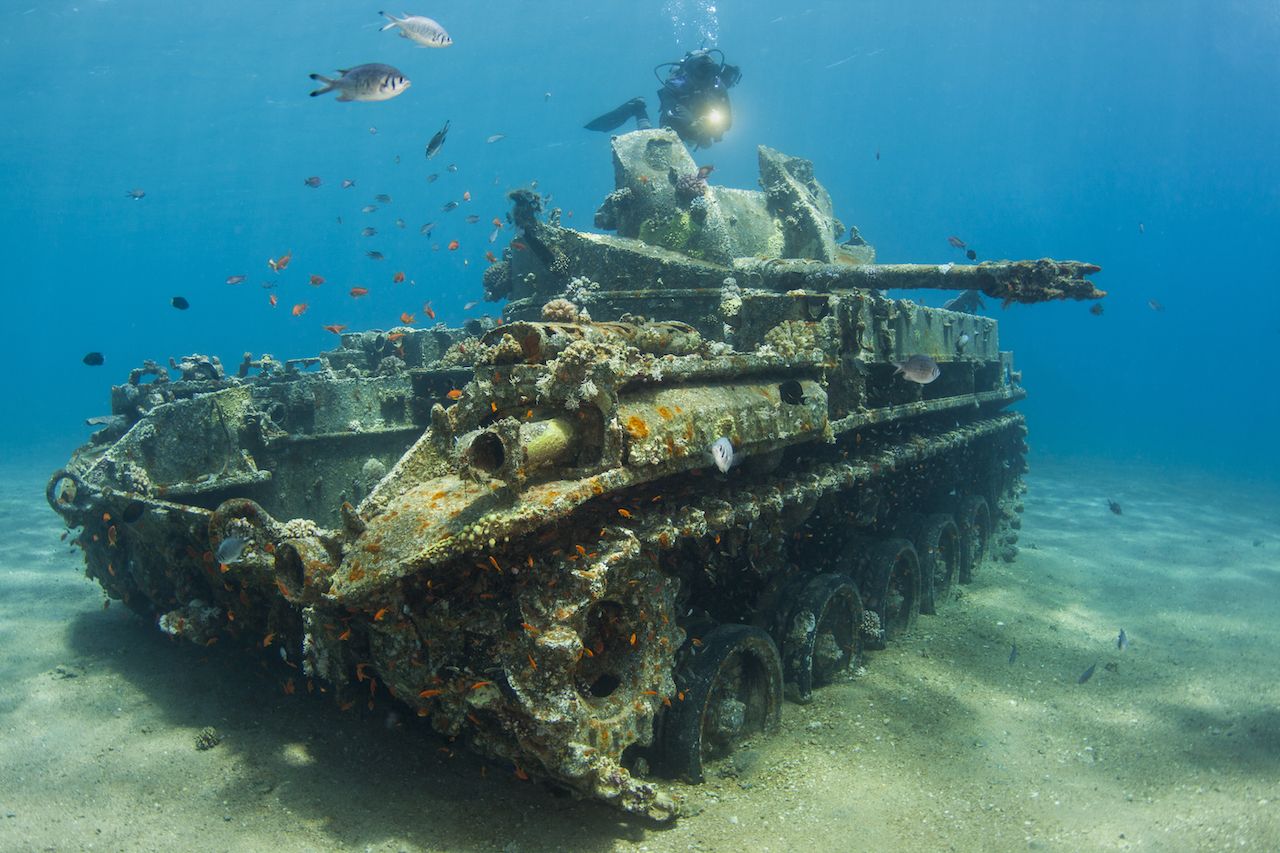 Earlier this year, Jordan sank 19 military vehicles in the Red Sea off the coast of Aqaba, the nation’s lone port city. The retired conveyances range from troop carriers to tanks, even a helicopter, which have been arranged in a tactical formation between 65 and 95 feet down. Part artificial reef, part underwater museum, the display is intended to both promote tourism and benefit marine life.

According to the Aqaba Special Economic Zone Authority, which previously worked with the United Nations Development Programme to relocate threatened coral reefs, all vehicles were stripped of potentially damaging materials before being sunk. If everything goes to plan, the site will redirect divers away from threatened Red Sea reefs, and the museum will add even more vehicles once they become available. 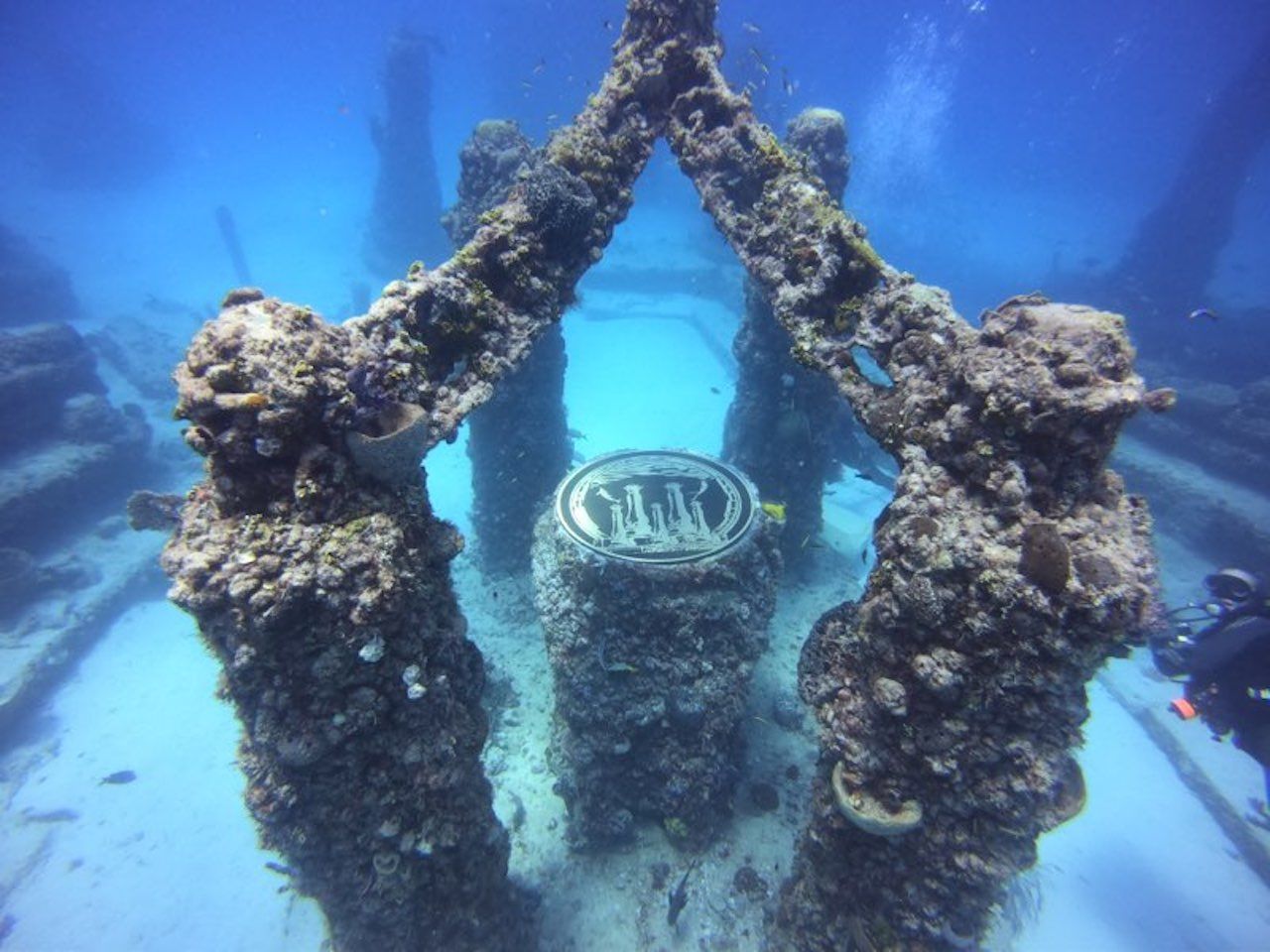 A few miles east of Miami’s Key Biscayne sits an artificial reef that bills itself as the largest man-made reef ever created. Though it eventually plans to cover more than 16 acres, the site currently has two main draws. The first is an interpretation of the Lost City of Atlantis located 40 feet deep, a comfortable depth for even novice divers. Also a member of the Green Burial Council, the Neptune Memorial Reef is a memorial site where friends and family can lay their loved ones to rest, having their cremated remains built right into the sunken city.

Studies have shown that marine life is taking to the artificial reef swimmingly, pun intended, which abides by strict environmental regulations imposed by the EPA, DERM, NOAA, Florida Fish and Wildlife, and Army Corps of Engineers. The reef is free for all divers.

3. Glide through a sculpture garden off Mexico’s Caribbean Coast. 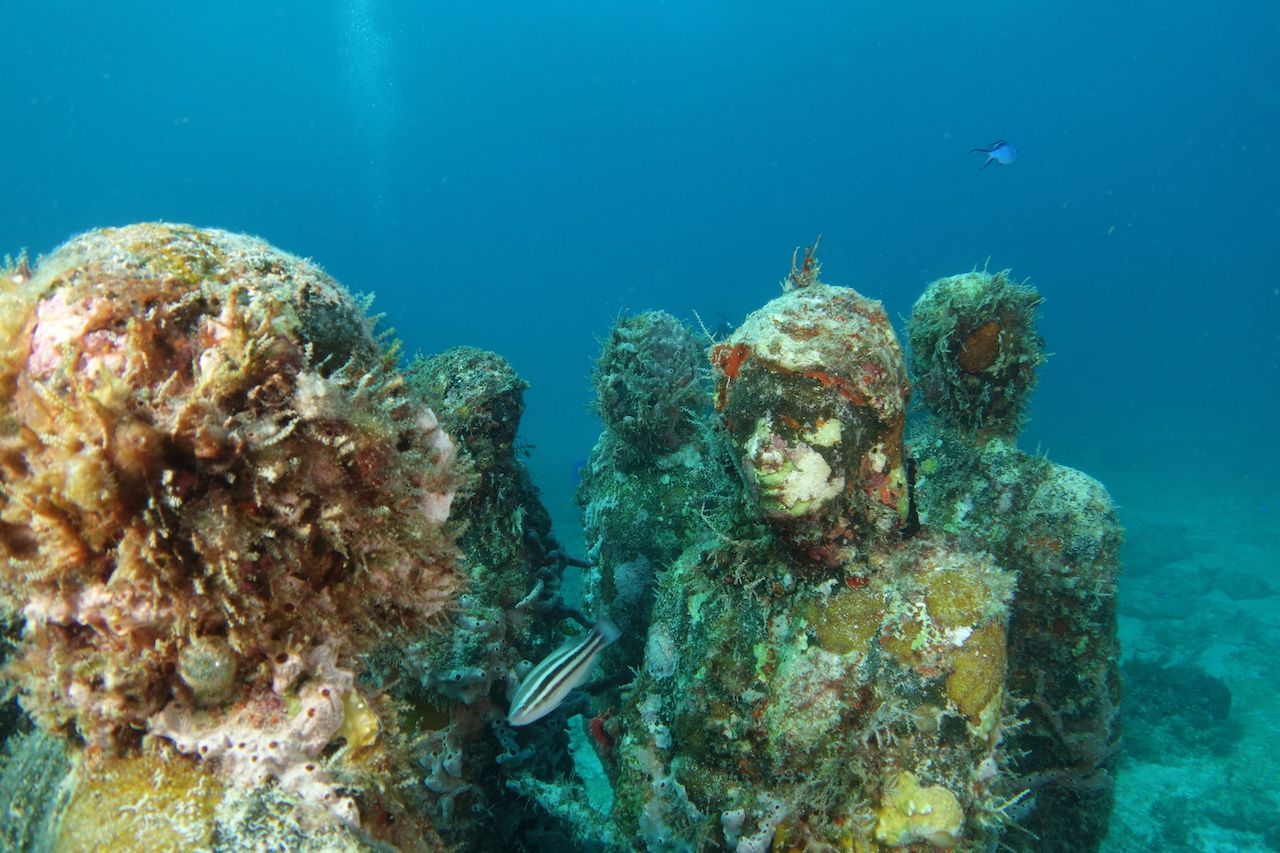 Like many, Mexico’s reefs are suffering from overtourism. In an effort to alleviate them, British artist and former scuba instructor Jason de Caires Taylor created an underwater installation in the National Marine Park spanning Cancún, Isla Mujeres, and Punta Nizuc. The site showcases hundreds of underwater statues, mostly of human bodies arranged in various positions and incorporating various props. The sculptures were made using extra durable cement with a neutral PH to not disturb sea life, and damaged coral was replanted on the sculptures, making them even more eco-friendly and eye-catching. 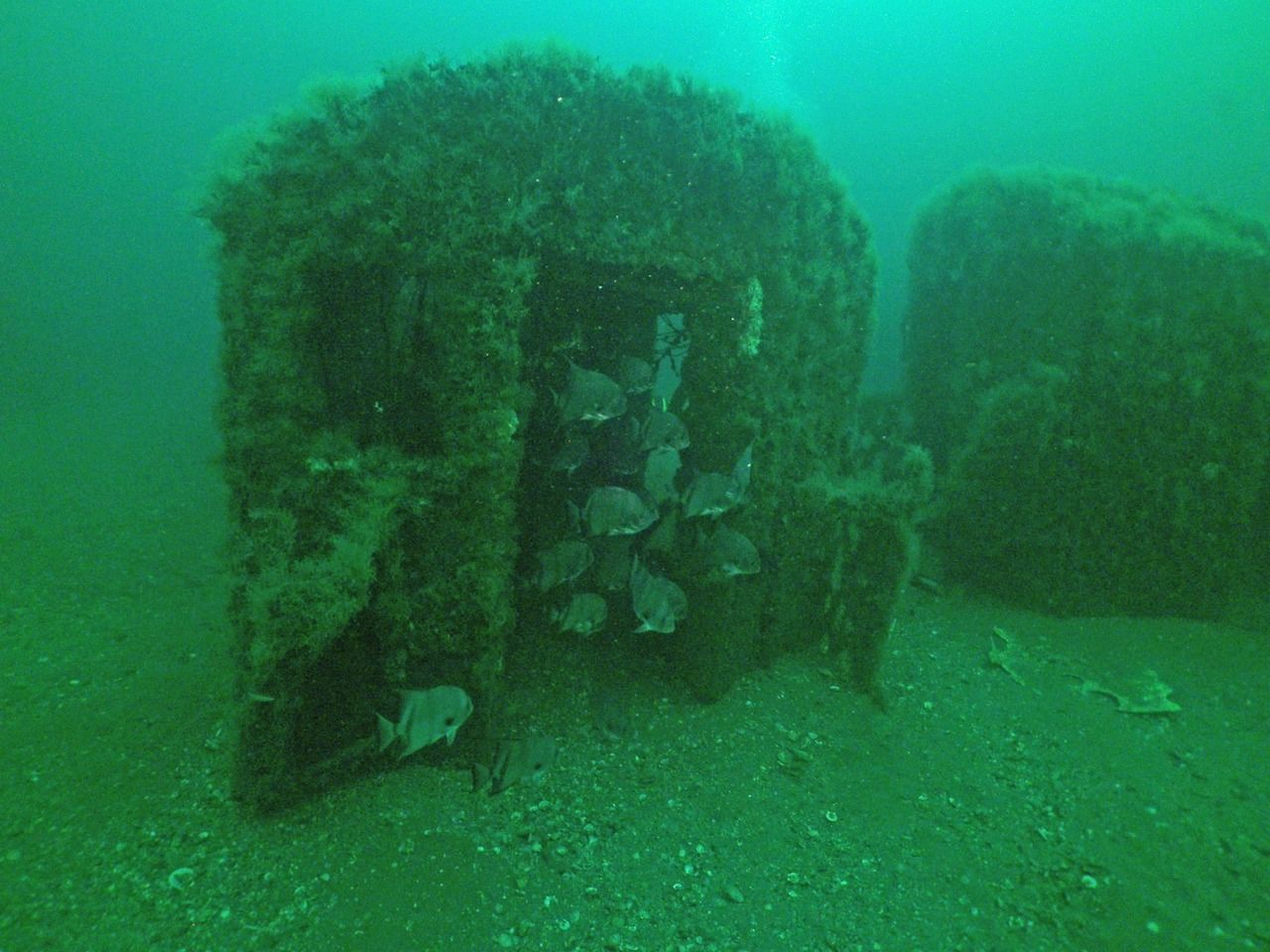 Poll commuters at rush hour, and most will say that the NYC subway is a necessary evil, a boon that’s appreciated but not exactly enjoyed. Sneak a peek at subway cars submerged 80 feet underwater, however, and you’ll be blown away by the MTA’s transit system. Prepare for chilly waters and make your first stop Redbird Reef off Slaughter Beach in Delaware to see more than 700 retired Redbird cars teeming with species like black sea bass and flounder. Also included in the reef are numerous tanks, barges, and tires.

In total, over 2,000 decommissioned Redbirds and Brightliners have been sunk in the Atlantic off the coasts of New Jersey, South Carolina, Virginia, Maryland, and Georgia. Though the cars are stripped and cleaned before being dumped, the project was met with raised eyebrows in the early stages from environmental groups claiming the decontamination process left something to be desired. Nonetheless, the impact on marine life ranging from fish and lobsters to corals and sponges has been demonstrable, making the reefs popular not only with sea creatures but also divers and anglers. Non-divers can also appreciate the sunken subway cars thanks to a photo series by Stephen Mallon that chronicles their submersions over three years.

5. Support the Rigs to Reef program in the Gulf of Mexico. 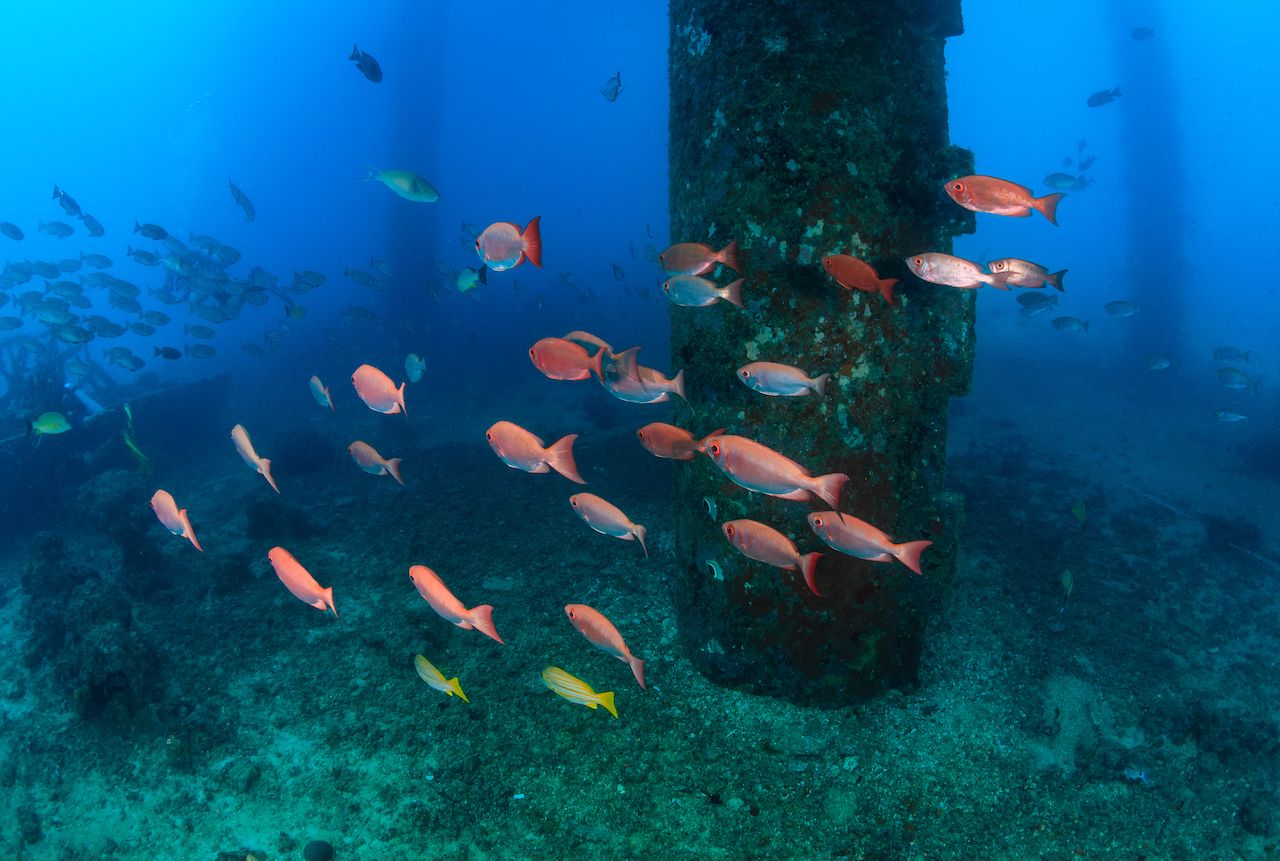 Offshore drilling is a blight on the environment, but removing oil rigs can be even more damaging to underwater ecosystems than simply decommissioning them. Transforming these rigs into artificial reefs by removing their tops and letting their bodies be, however, has proven beneficial to marine life. The metal structures make surprisingly good homes for corals, fish species, and other sea creatures, a fact the Rigs to Reef program has been capitalizing on for decades.

More than 532 divable platforms have been created off the Gulf Coast of the United States ever since the National Artificial Reef Plan was passed in 1985. Alabama, Texas, Louisiana, Florida, and Mississippi all participate in the program in accordance with strict, state-specific reef laws, though California has converted several of its own rigs into artificial reefs. Similar projects have also been successful in Malaysia, Brunei, and elsewhere.

6. Head to Thailand to dive among reef cubes. 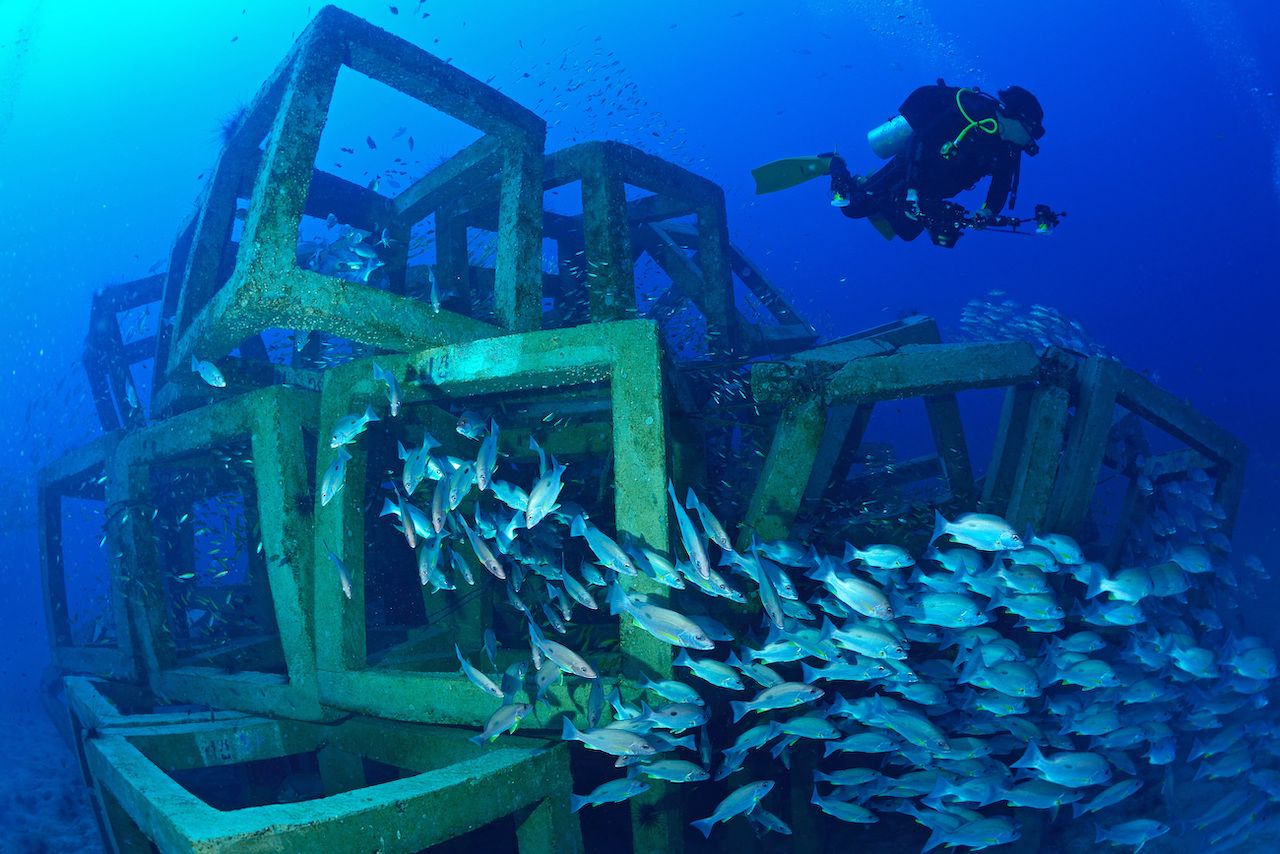 With its warm waters, sharks and rays, and countless scuba schools, Koh Tao has earned its reputation as one of Thailand’s leading dive islands. Since 2015, there’s been yet another reason to visit: the Koh Tao reef cubes. Hundreds of concrete cubes have been scattered around the island by the New Heaven Reef Conservation Project, following an initiative started by the Department of Marine and Coastal Resources. Despite being hollow frames, each weighs upward of a ton, and they’ve been arranged in a geometric pattern to create an underwater display that doubles as modern art. Reef cubes have also been sunk off the coast of Phuket.

7. Swim by a Boeing 747 at Bahrain’s massive underwater theme park. 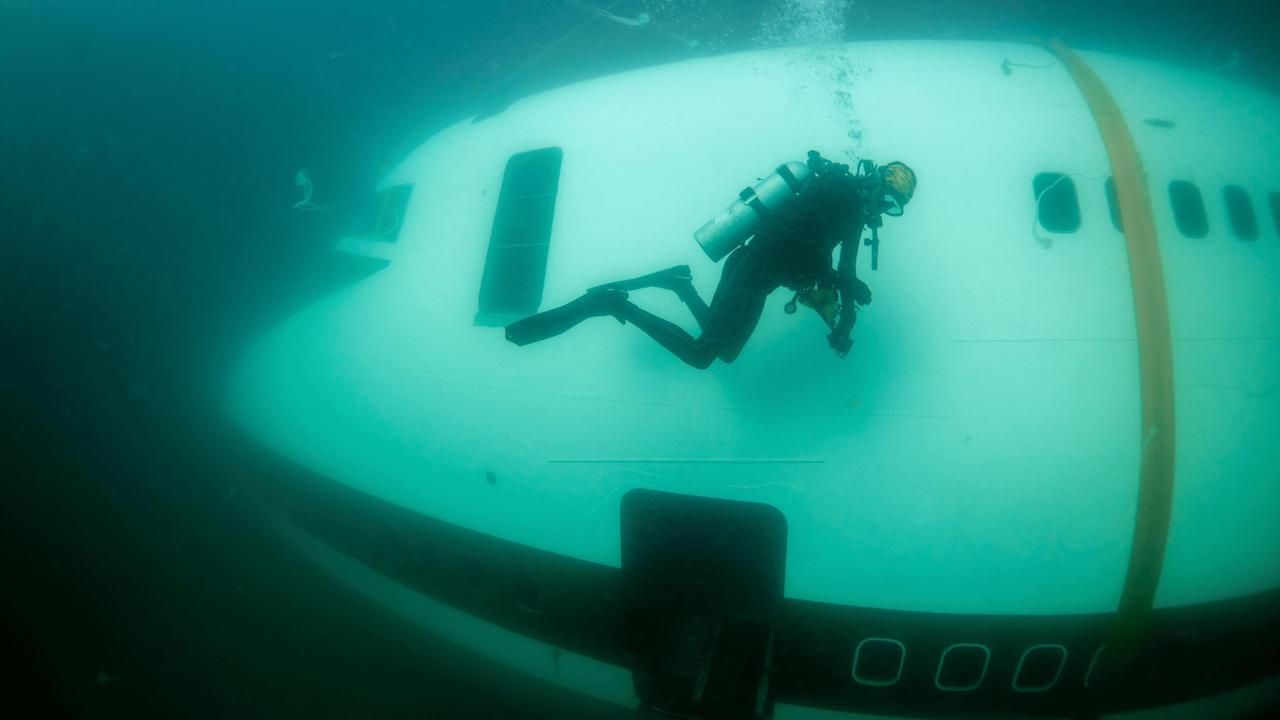 Air travel can be draining, but boarding a 747 that’s submerged 80 feet under the sea is anything but a drag. Thanks to Dive Bahrain, which the island nation claims will be the largest underwater theme park in the world at over a million square feet, you’ll be able to do just that. Though the park is slated to open later this summer, the 200-plus-foot Boeing aircraft has already been sunk, nose up so it’s accessible to divers of all experience levels.

According to Dive Bahrain, the 747 was stripped of all wires, hydraulics, plastic and rubber parts, and other hazardous materials, as well as being washed with ocean-safe detergents to ensure it was fit to be sunk without harming sea life. Alongside the submerged plane, the massive marine park will also feature artificial coral reefs, eco-friendly sculptures, and a replica pearl merchant’s house, a fitting addition as Bahrain’s economy was largely built on pearl diving. Not only will this bring Six Flags levels of fun to the ocean floor, but the marine park also hopes that the project will help researchers learn more about the local ecology.

DivingScuba Diving in Baja California Is One of Mexico’s Best-Kept Secrets
Tagged
Diving Trip Planning
What did you think of this story?
Meh
Good
Awesome