Uruguay beguiles with iconic gauchos, South American cowboys, herding cattle on its grassy plains. It inspires with its progressive social policies, having beat out Canada as the first country to legalize recreational weed. But more than anything, Uruguay beckons with its miles of sand. From empty beaches framed by pine forests to sandy stretches filled with beautiful people and thumping music, Uruguay has a beach for every type of traveler. And summer in Uruguay is happening right now, so get yourself to this tiny, charismatic country and start beach-hopping.

Uruguay by the seasons 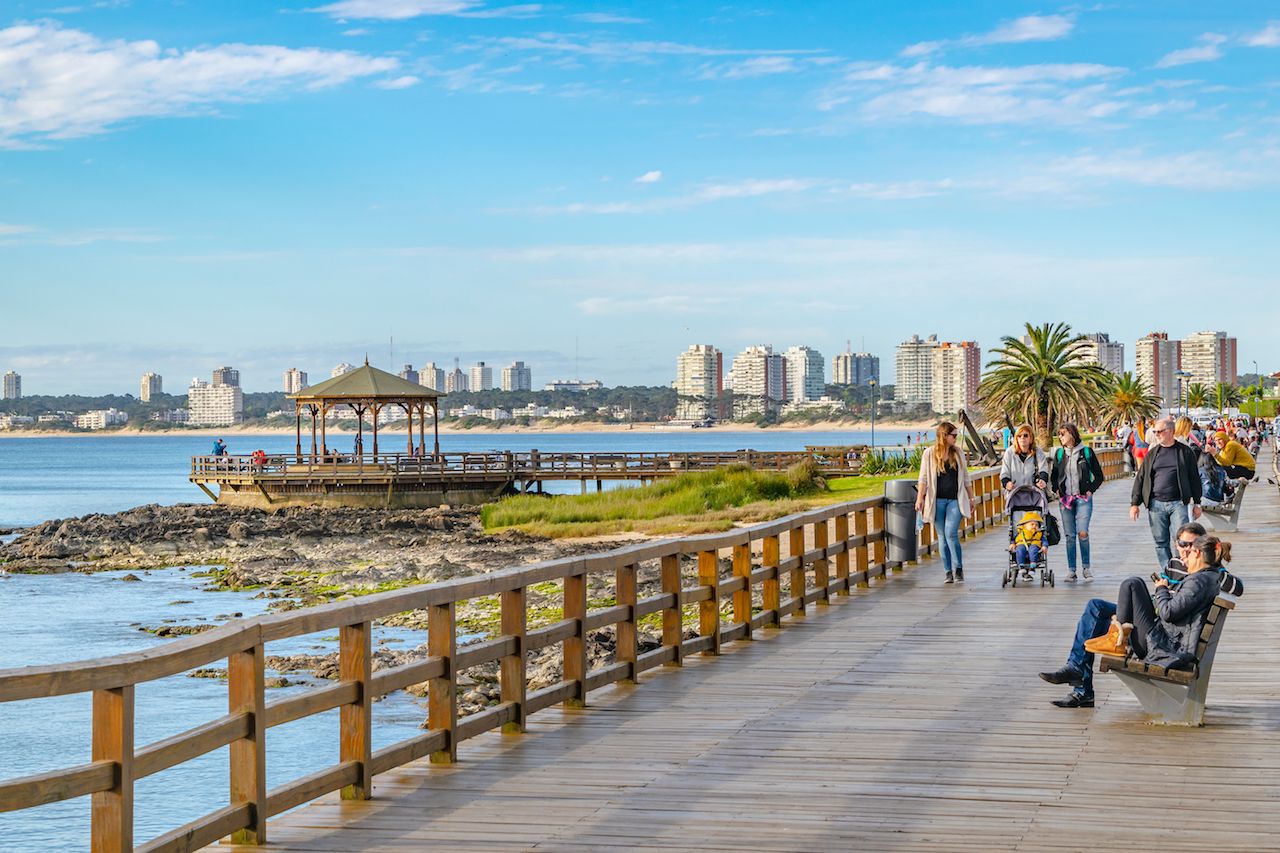 Uruguay is pretty far south, with average lows of 45-50 degrees Fahrenheit from May to September. It’s a damp, deep cold, and Uruguayans cope with winter by ducking into cafes and bookstores or sharing a hot gourd of mate tea with friends. On clear days, though, a brisk walk along the wide beachside promenades of Uruguay’s capital city, Montevideo, is a soothing reminder of warm days ahead.

In the spring months of October and November, Uruguay is transformed. Locals shed their layers and head for the shore, gathering at waterside restaurants and bars in their capital city, Montevideo. They hang out in parks at weekend markets or gather with their extended families for parilladas, barbecues of every type of meat imaginable, eating outside while uncorking bottles of local Tannat wines or Argentine Malbecs.

Not until the first of December does the Uruguayan beach scene take off. Come that date, high temperatures reach 80 degrees Fahrenheit, and the resort towns of Punta del Este and José Ignacio explode with energy, filling up with Uruguayans and Argentines who arrive for summer vacation. The summer spirit lasts through early March. So if you want a party, come now. Come later, in Uruguay’s early spring, and you’ll have the same warmth and sunshine but fewer crowds and better accommodation bargains.

The beaches of Montevideo 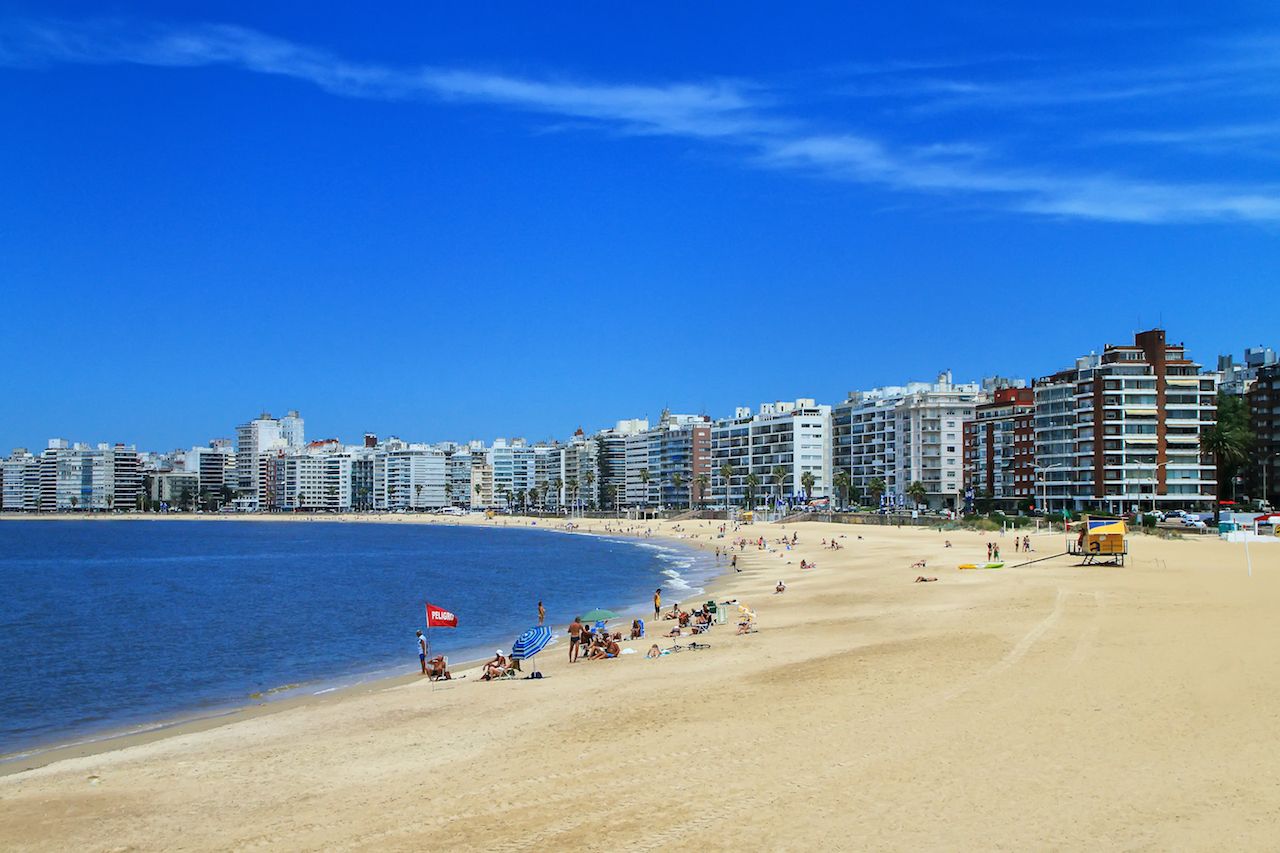 Montevideo, the capital city of this tiny country of 3.5 million, is located at the mouth of the Rio de la Plata where this wide river separating it from Argentina meets the Atlantic ocean. With their mix of river and sea, the waters of Montevideo’s beaches are reddish and opaque but still draw bathers in the height of summer. Playa de los Pocitos, which shares its name with the adjacent neighborhood, is a broad beach lined with a red and white boardwalk and the cityscape behind. If your stay is limited to Montevideo, a walk along this photogenic city beach is a must.

East of Pocitos are Playa Malvín and Playa Honda. Even this short distance away from the river mouth makes the water a little clearer and bluer, although an unmistakable red-brown river tint remains. Swells hit Playa Honda more directly, bringing occasional waves and the local surfers who ride them. After that, the wealthy suburb of Carrasco fronts miles of shoreline that’s very popular on sunny days. 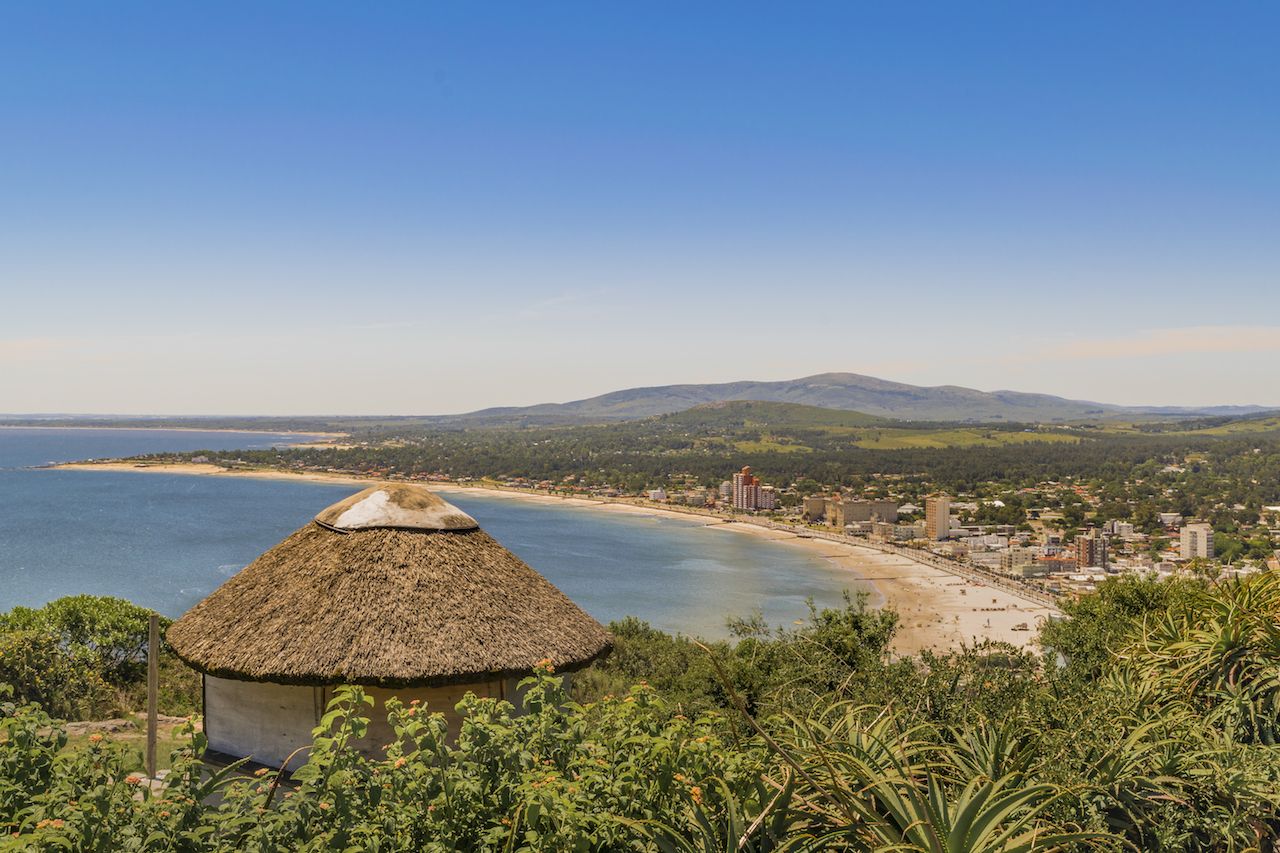 As you head further east from Montevideo — and eventually north, following the coastline towards Brazil — the beaches get progressively more beautiful. The next big beach town is Punta del Este, but more on that below. Before you arrive in Punta del Este, you’ll pass the beaches of Altántida and Piriápolis, popular with local families who want to escape the city for a summer outing.

Piriapolis has a laid-back vibe, and the views from the hill overlooking the ocean are worth a photo or two. The town was once popular with wealthy Argentines, and the stately Hotel Argentino is a reminder of those heady days. It still has its grand casino, but these days the clientele is more Uruguayan. The Argentines, meanwhile, have decamped to Punta del Este and José Ignacio, where prices for everything from lodging to food are higher. 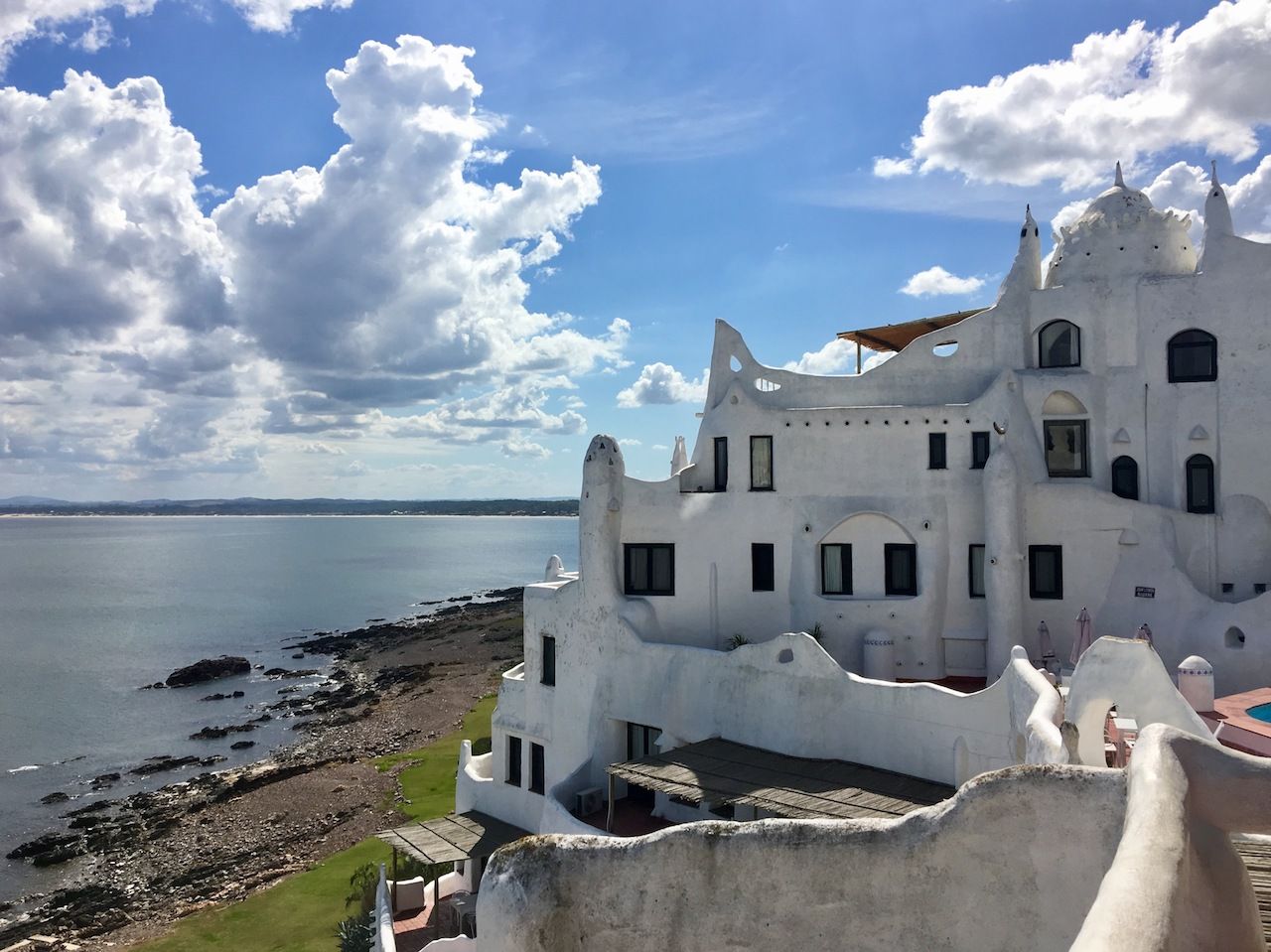 The bustling city of Punta del Este is where Argentines who can afford it spend their summer vacations, preferring its warm waters and laid-back vibe to their own country’s beaches. Punta may be full of Miami Beach-style high-rises, but it’s surrounded by forests and offers up plenty of pristine beaches close by.

Before you arrive at the town of Punta itself, you’ll find one such beach, Solana de Mar. You can spot Solana del Mar by the hill, Punta Ballena, that overlooks it. Atop the hill is a large white house called Casa Pueblo, a sprawling version of a Greek island abode. It was once the residence of Carlos Páez Vilaró, one of Uruguay’s most famous artists, who would greet visitors to his home-cum-museum on a hill. On a visit some years ago, he recognized my Uruguayan mother from her art school days, so I found him especially charming. As to Solana del Mar beach, it’s a perfect place to take in the sunset. It’s so long, wide, and flat that it’s ideal for long walks or, so I’ve been told, a polo match. 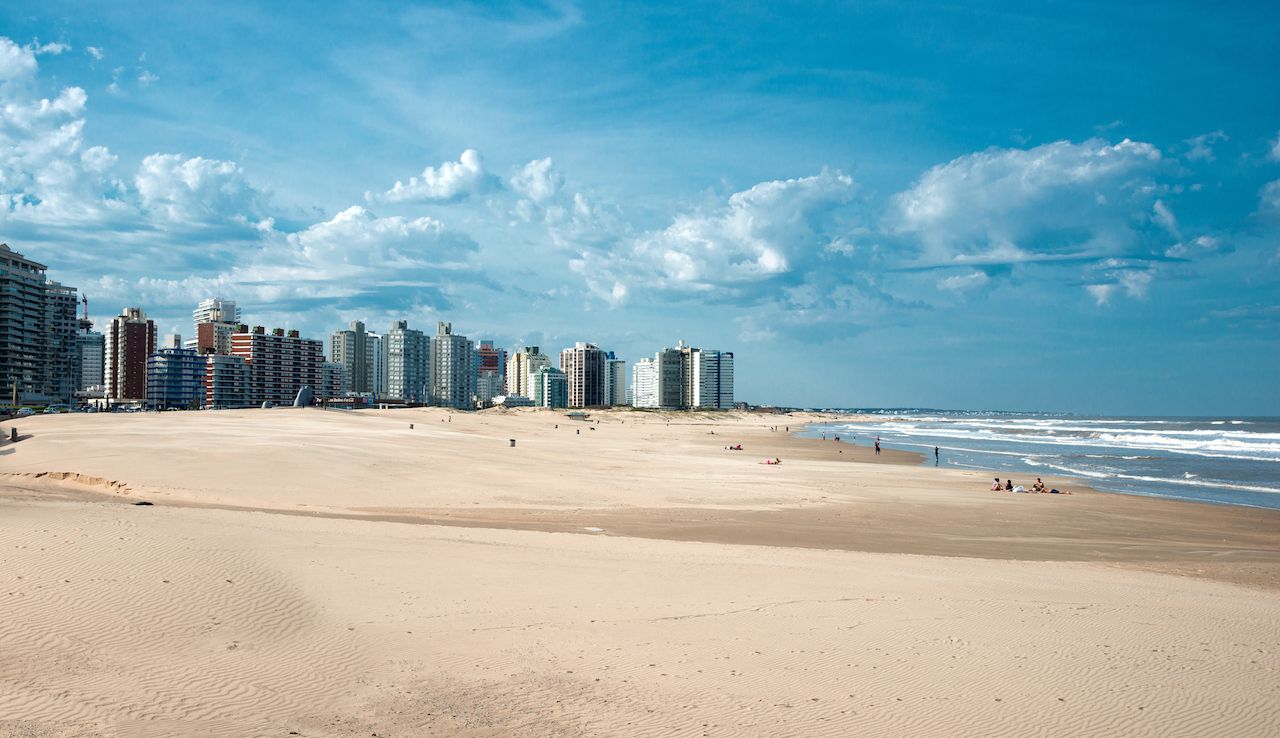 Punta del Este, which means Point of the East, is so-named because it’s a peninsula due east of Montevideo. The peninsula juts south into the Atlantic, creating two kinds of beach condition. On the westerly side of the peninsula, the beach is protected from cold Antarctic currents and is hence called Playa Mansa, or Tame Beach. The water is warm and waveless, making it perfect for families with kids — although you should watch out for the occasional stinging jellyfish.

Although the beach gets jammed in summer, most beachgoers don’t head out until after lunch and maybe even a siesta, meaning the crowds don’t really pick up until 3:00 PM. On the eastern side of the Punta peninsula is Playa Brava, or Wild Beach. The water is colder here but better for surfing and boogie boarding. Playa Brava is also windier, but you won’t find any jellies here — just a lot of Argentines.

Due east is a tiny beach called Playa Los Cangrejos, which you’ll find behind the Le Club hotel. You’ve left Punta’s high-rises and found your own private escape just a few minutes away; just beware the rocks on either side of this beach cove. Beyond Los Cangrejos are the Montoya and Bikini beaches. While you may have escaped the big buildings here, on hot afternoons the sand is packed with cool, young Uruguayans and Argentines playing paddle, flirting, drinking, and listing to very loud music.
· 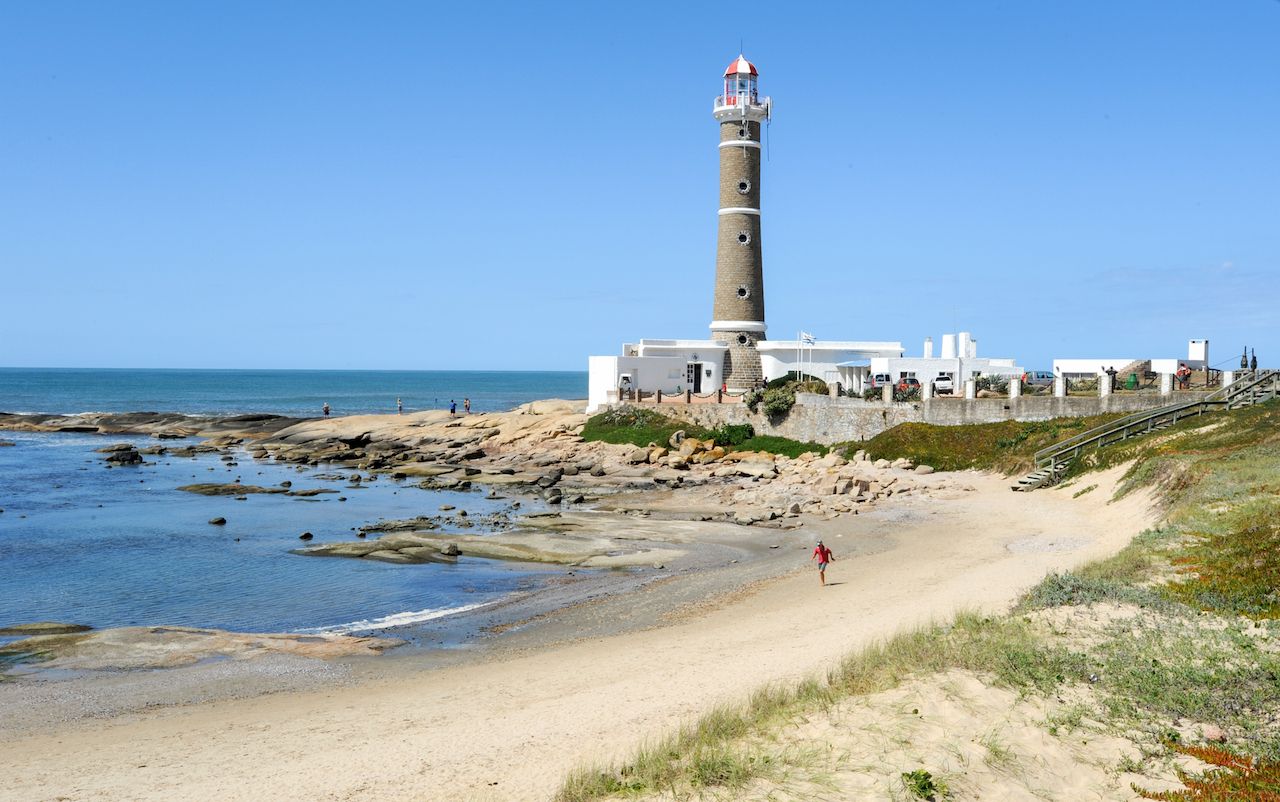 This small, hip, town started drawing celebrities from North America well over a decade ago. While you could shell out hundreds a night to stay at its poshest ocean-view inns, you can also find hostels and lodges for much less just a few roads in from the shore.

Confusingly, José Ignacio also lies on a point, albeit a smaller one than Punta del Este, and hence has beaches with the same “tame” and “wild” names. José Ignacio’s Playa Mansa, unlike Punta’s Playa Mansa, lives up to its name. Its waters are not quite as warm as Punta’s, but they are pretty mild and certainly wave-free. More importantly, behind this sandy cove lie grass-covered dunes and, behind them, acres of forest — not the apartments of Punta. It’s the perfect place to spend the afternoon, staying even for a lovely summer sunset.

As you’d expect, Playa Brava is windier, and the waves are stronger. It’s a good place to watch the surfers or just beautiful people in general. Before hitting the beach, stop for lunch at Parador La Huella, a celebrated restaurant that’s racked up awards. If you can’t get a table there, you’ll have lots of restaurants on the José Ignacio peninsula. Make sure to get a seat at the upstairs rooftop areas. After lunch, stop at El Faro, the lighthouse at the end of the point, for photos. 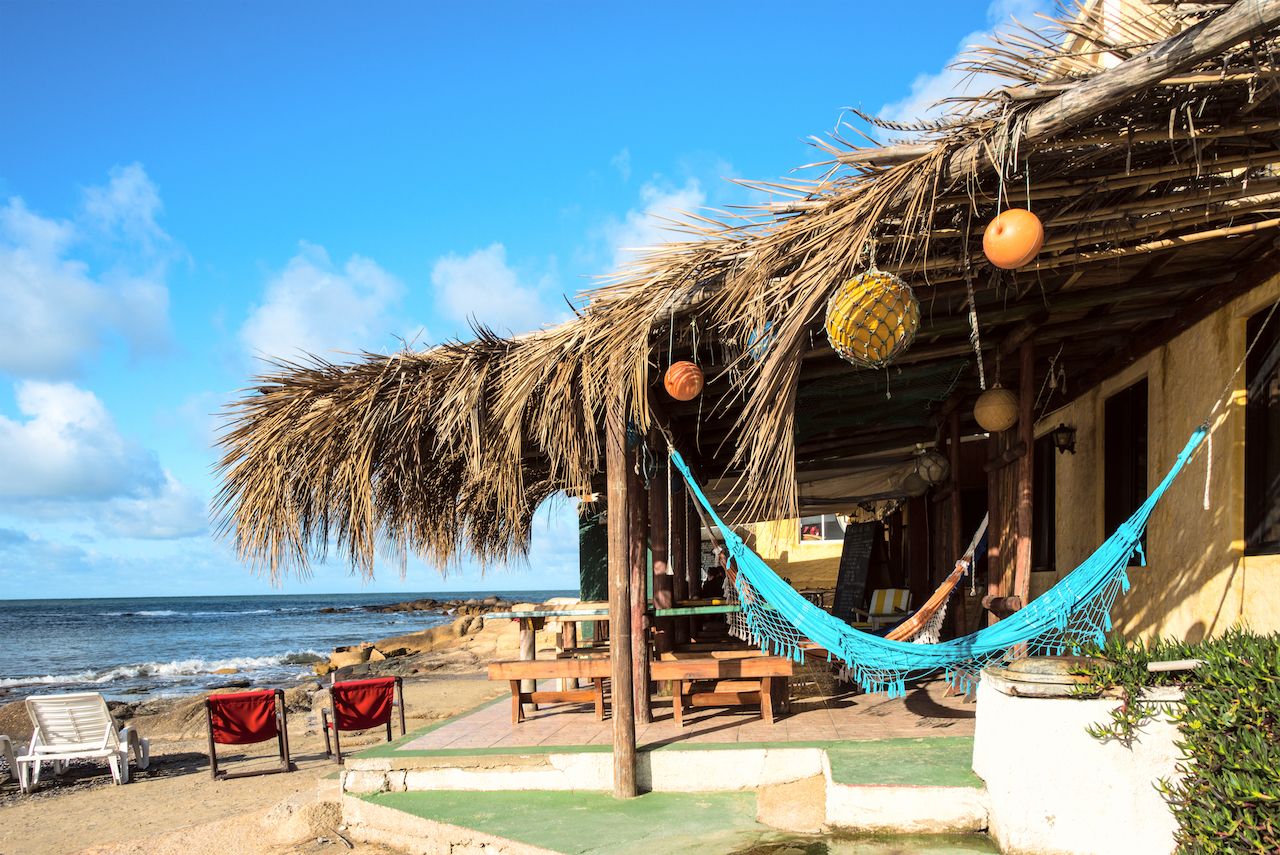 Beyond José Ignacio is Uruguay’s Rocha Department, home to the country’s loveliest and least-developed beaches. The first of them is La Pedrera, a resort area started by folks who’d tired of the bustle and crowds of Punta. Its wide sweeping beaches — lined by dunes, grasses, and occasional beach houses — are Playa del Desplayado, Playa Punta Rubia, and Playa Santa Isabel.

Further on is Cabo Polonio, a protected area of sand dunes and sea lions. You can either hike into the shore or buy tickets for a truck ride over the dunes. Despite the lack of electricity or running water, hippies — whom the government is trying to evict — have settled in the area over the years. Cabo Polonio’s sweeping dunes are worth a visit. 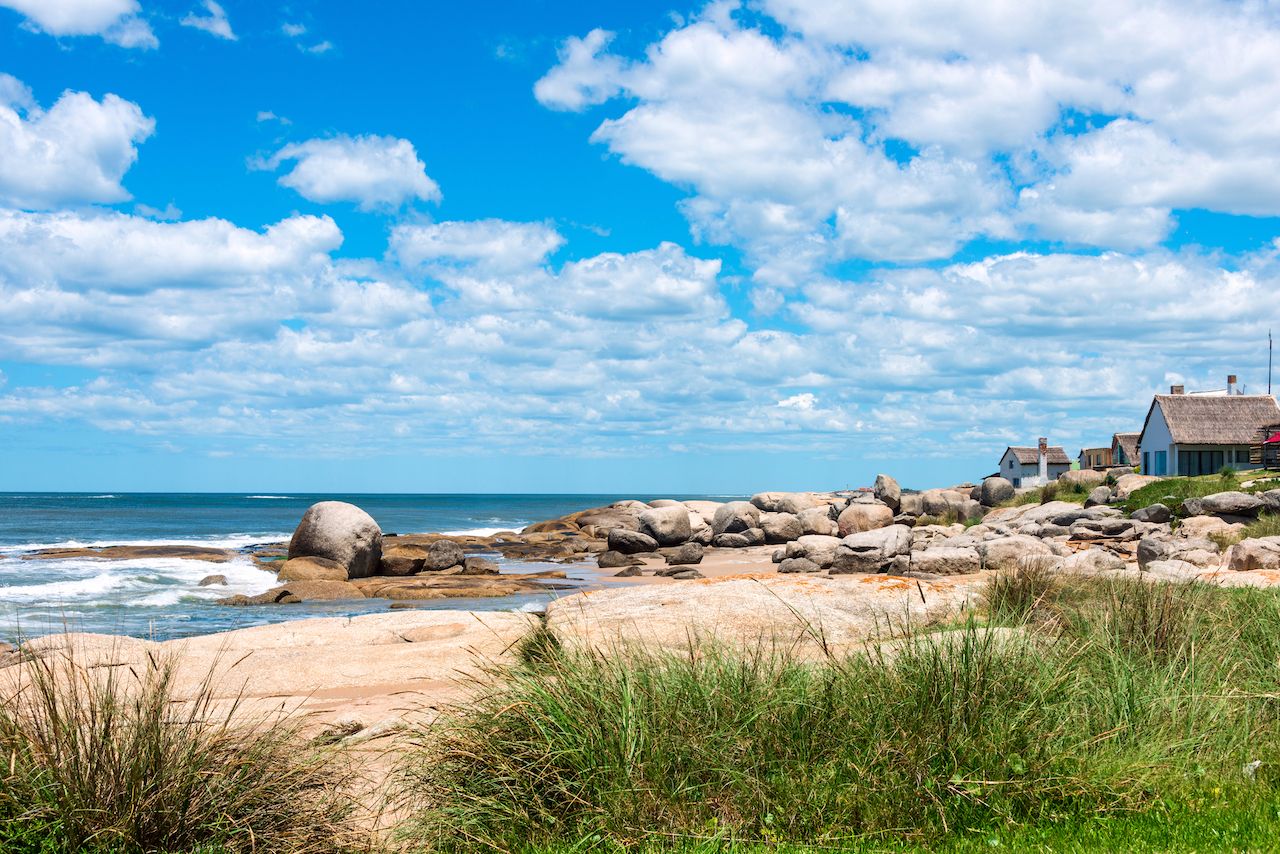 North of Cabo Polonio is Barra de Valizas, a long beach of fine sand but slightly rougher seas. There’s not much development in this area, but the beaches still fill up in the afternoon. The next major area is Punta del Diablo, or Devil’s Point. Not too long ago, Diablo was a low-key fishing village.

Drive past Playa del Rivero to Playa Grande, located in the Santa Teresa National Park. As its name, “Big Beach,” suggests, it’s a vast stretch of endless sand. With all that sand, groves of pine and eucalyptus behind you, and the blue Atlantic — and maybe a few surfers — in front of you, it doesn’t get much better than this.

SurfingWhy Peru Is the Most Underrated Surfing Destination
Tagged
Beaches and Islands Insider Guides Uruguay
What did you think of this story?
Meh
Good
Awesome