When it comes to architecture and design, fancy hotels, record-breaking pools, and intriguing-looking libraries hog the spotlight while the one thing we all need to use daily, the toilet, is consistently overlooked. Indeed, public toilets aren’t exactly known for being architectural wonders. But public toilets don’t have to be grubby, cold, concrete squares that give you the heebbie-jeebies. There are architects, artists, and designers out there who have succeeded in marrying aesthetics with functionality in public toilets. Their bathrooms are inventive, appealing, environment friendly, versatile and welcoming to their users. Here is a look at nine places around the world where you’ll find the most beautiful public toilets. 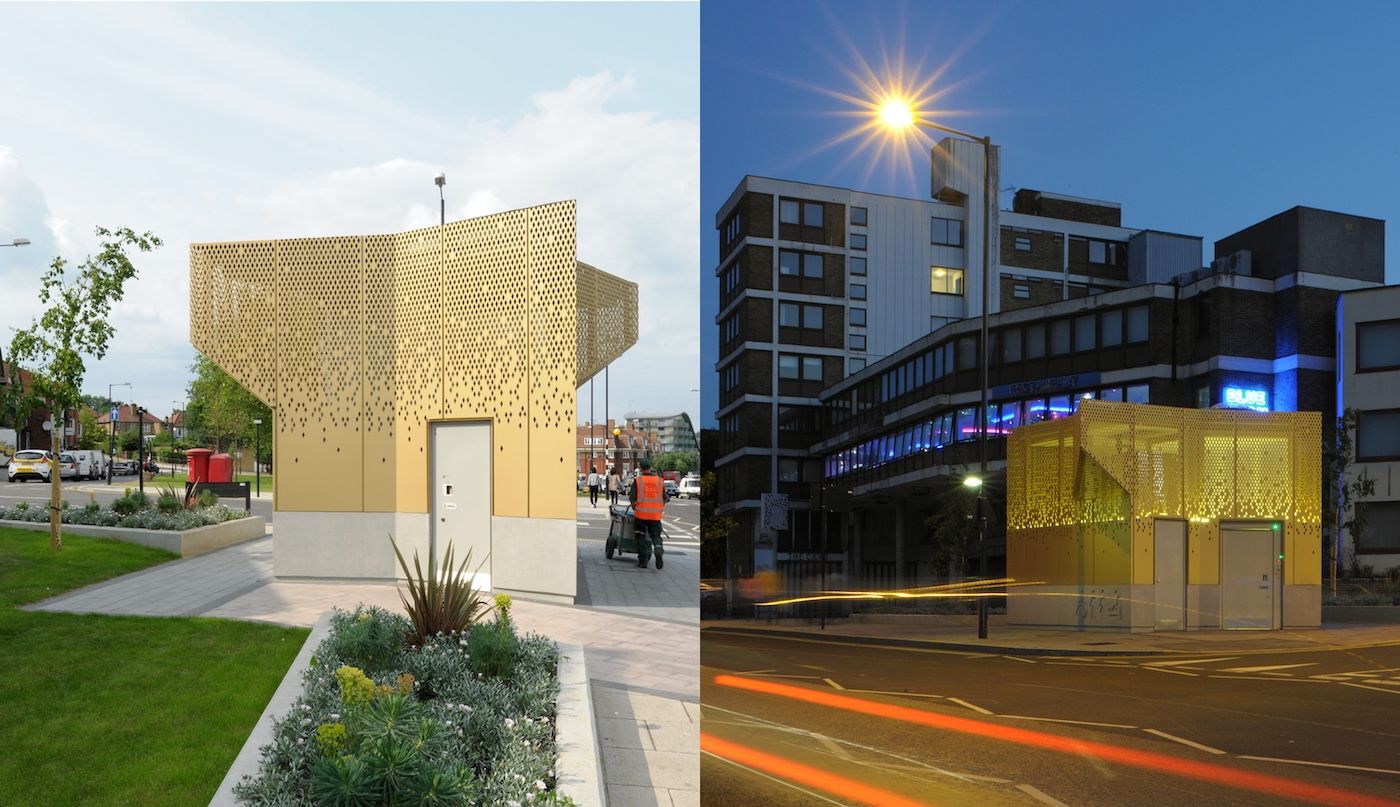 Located near the Wembley Stadium in Greater London, the Golden Public Toilet was designed in 2013 by the Gort Scott architecture and urban design practice. The uniquely geometric building sits within a landscaped pedestrian area at a busy street corner. Inside there are four urinals, an accessible WC, and a concealed tank behind the mirror to collect rainwater for flushing the toilets.

The structure has a roof height of 16 feet with a concrete base. The exterior wall is made with golden aluminum sheeting with diamond pattern perforations in the top half that provide light and ventilation but ensures complete privacy. In the evening, the brightly lit interiors create a surprisingly glamorous effect guaranteeing it to be found easily by the passers-by who need to it.

There are many contenders for well-planned public toilets in the United States. The rainwater flush lavatories at the Urban Ecology Center in Milwaukee, WI, are constructed entirely from recycled materials; the Public Glass Bathrooms in Sulphur Springs, Texas have one-way mirrors for walls; and the restrooms of Greeley Square Park and Bryant Park in New York City have luxe touches and are sparkly clean in spite of the many people who visit them every day. But the following are two public toilets that can certainly be considered as the best due to their unique design elements. 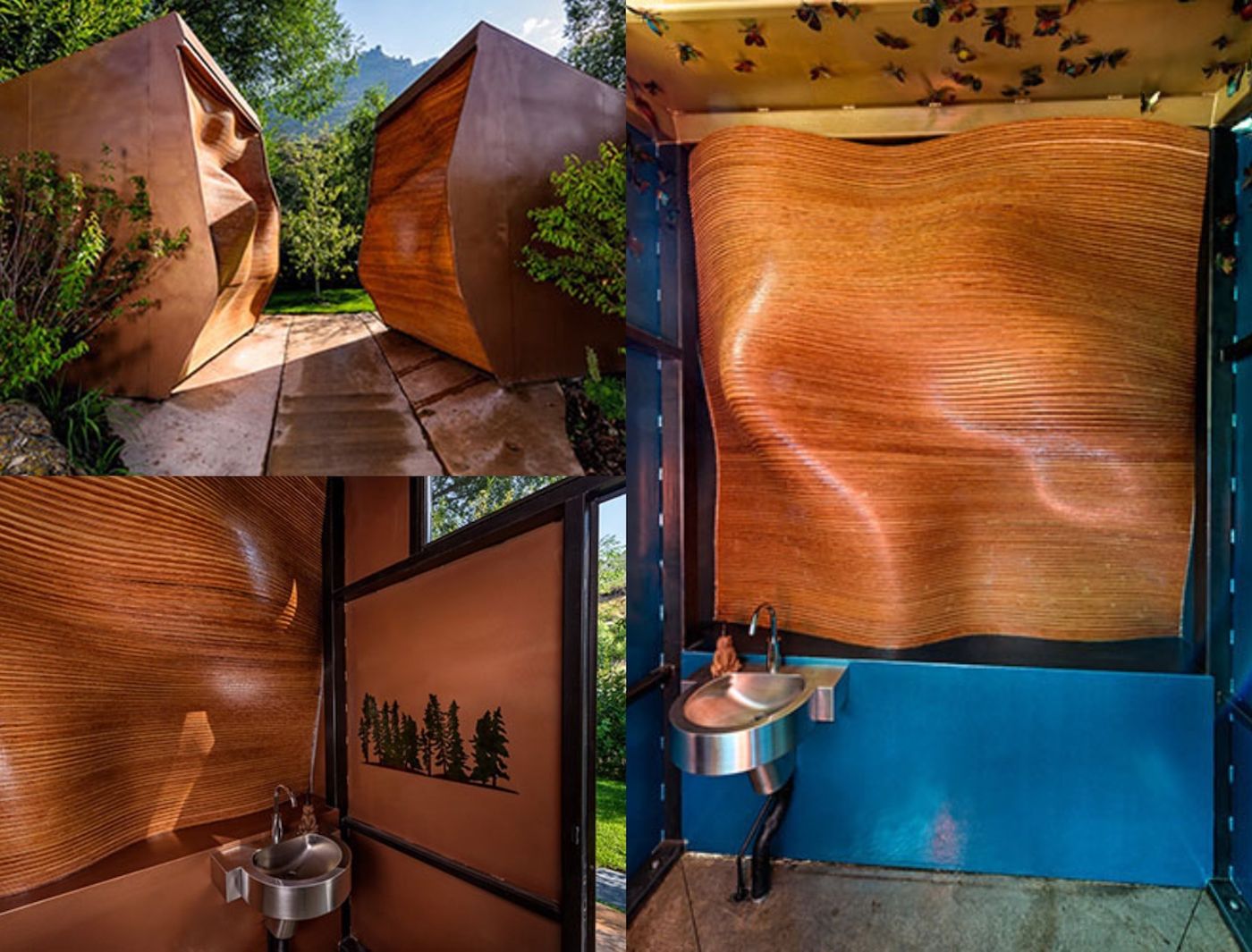 The Minturn Mining Toilet in the small town of Minturn, Colorado, is a stunning combination of art and architecture in the beautiful natural surroundings of Eagle Town Park. Built in 2015, the restrooms’ design reflects the mining history of Minturn. The fabricated shape of the men’s and women’s toilets mimics an adit (the entrance to an underground mine) in the Rocky Mountains. Made out of 320 wooden pieces and fabricated using 3D printing technology, the toilets with their copper colored walls, are a great example of functional art. In 2015, the Minturn Mining Toilet won America’s Best Restroom Award. 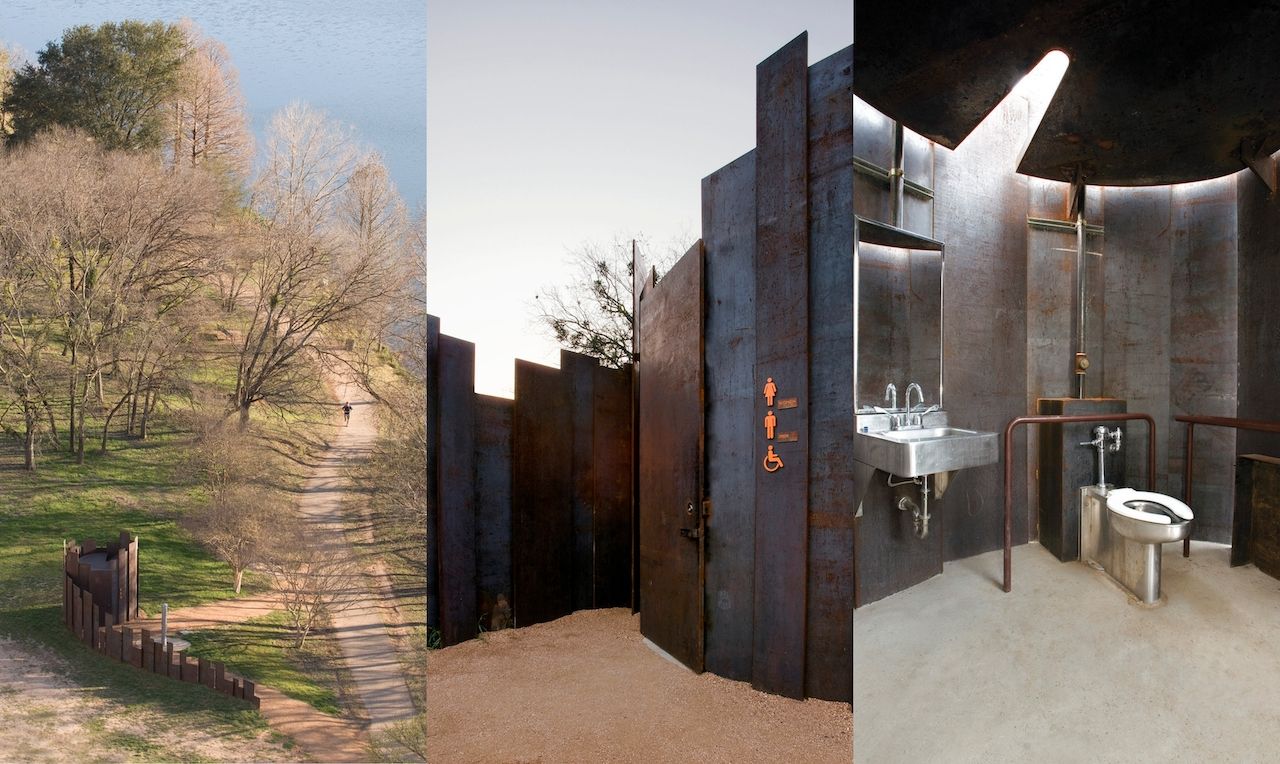 The Lady Bird Lake Trail Restroom in Austin, Texas was the first public toilet to be established in 30 years at the Lady Bird Lake Hike and Bike Trail, that meanders along the Colorado River. Designed by Miro Rivera Architects in 2007, the public toilets are an impressive blend of sculpture and function. The exterior walls of 49 different height panels are made of weathered corten steel that has a natural patina. The panels are embedded in the ground following the natural curve of the trail and ends in a spiral shape that encloses a unisex, accessible toilet. 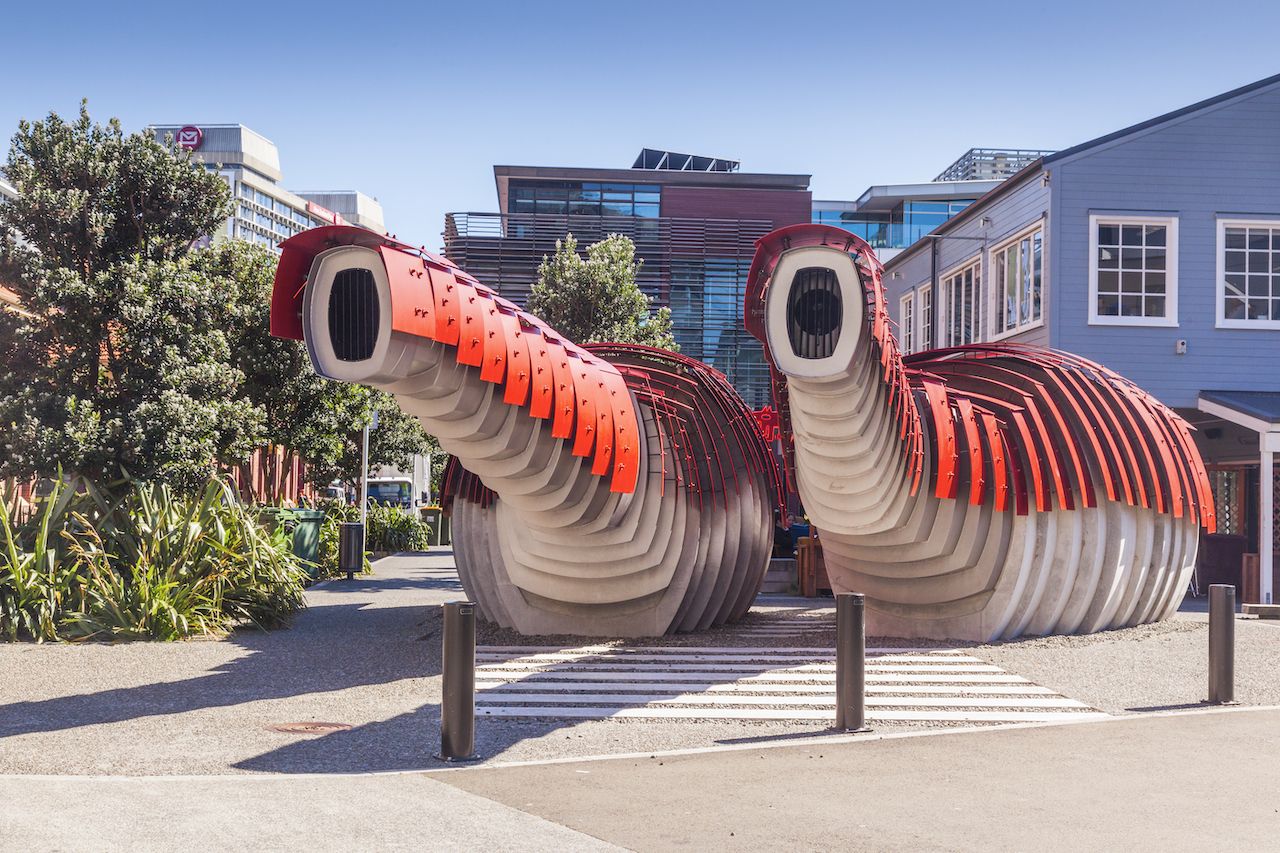 The public toilets located on Queens Wharf in the Kumutoto precinct of Wellington, NZ, are certainly eye-catching. Designed by Studio Pacific Architecture in 2011, the toilets have a unique, sculptural look that’s straight out of SpongeBob SquarePants, hence its nickname: “lobster loos”.

Red-colored steel shells are fitted over the series of concentric concrete rings that form the two separate toilets, each ending in a cantilevered tail with a louvered window that provides ventilation. Each structure has a genderless accessible toilet needed for the pedestrians strolling along the waterfront area.

The many public toilets located along the Norwegian Scenic Routes are all masterpieces of design. 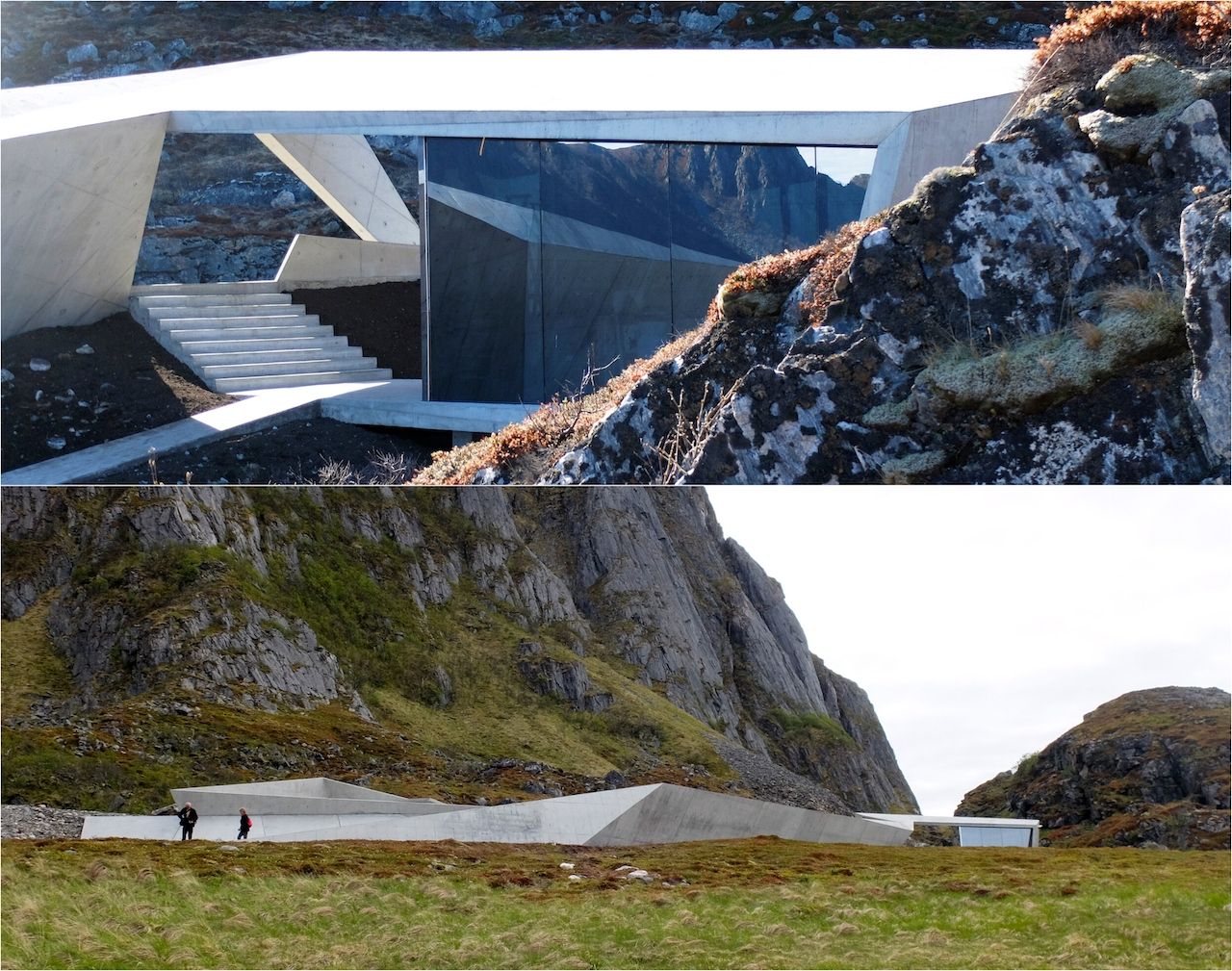 Along the Scenic Route of Andøya in Northern Norway is the Bukkekjerka Rest Stop, designed by Morfeus Arkitekter in 2018. The design reflects the dramatic landscape by way of the forms and materials used and together they meld with the rugged terrain. Folded concrete slabs make up the restroom building which has one-way mirrors for users to enjoy the surrounding landscape. The building is part of a larger creation which includes a bench, paths, a footbridge and parking and service amenities. 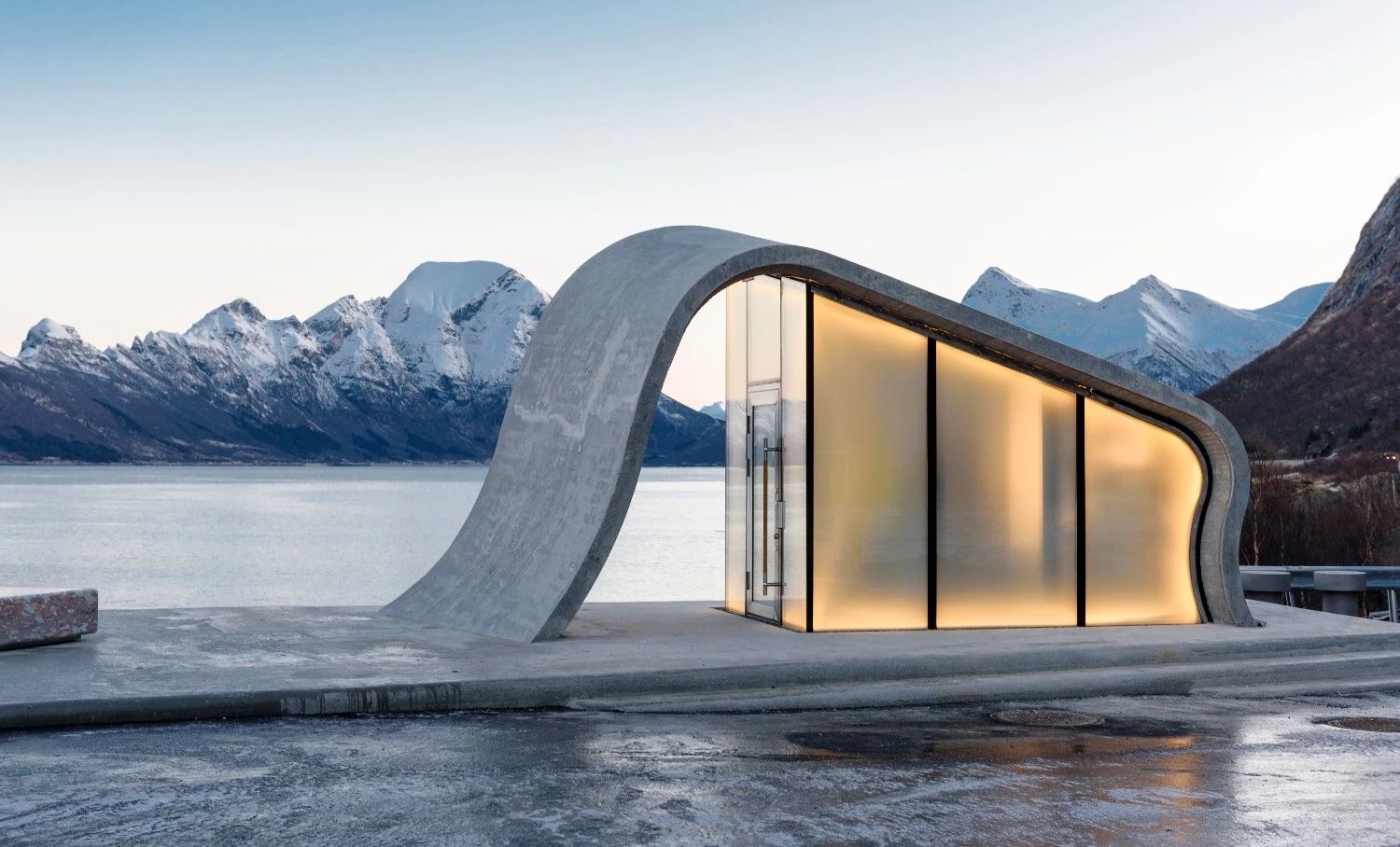 The Uredd Rest Area at Ureddplassen along the National Scenic Route Helgelandskysten was designed by HZA in 2018. The rest area is known for its magnificent views of islands, fjords, and northern lights and the wave-shaped toilet building was part of a redesign project for the site of a WWII memorial monument. 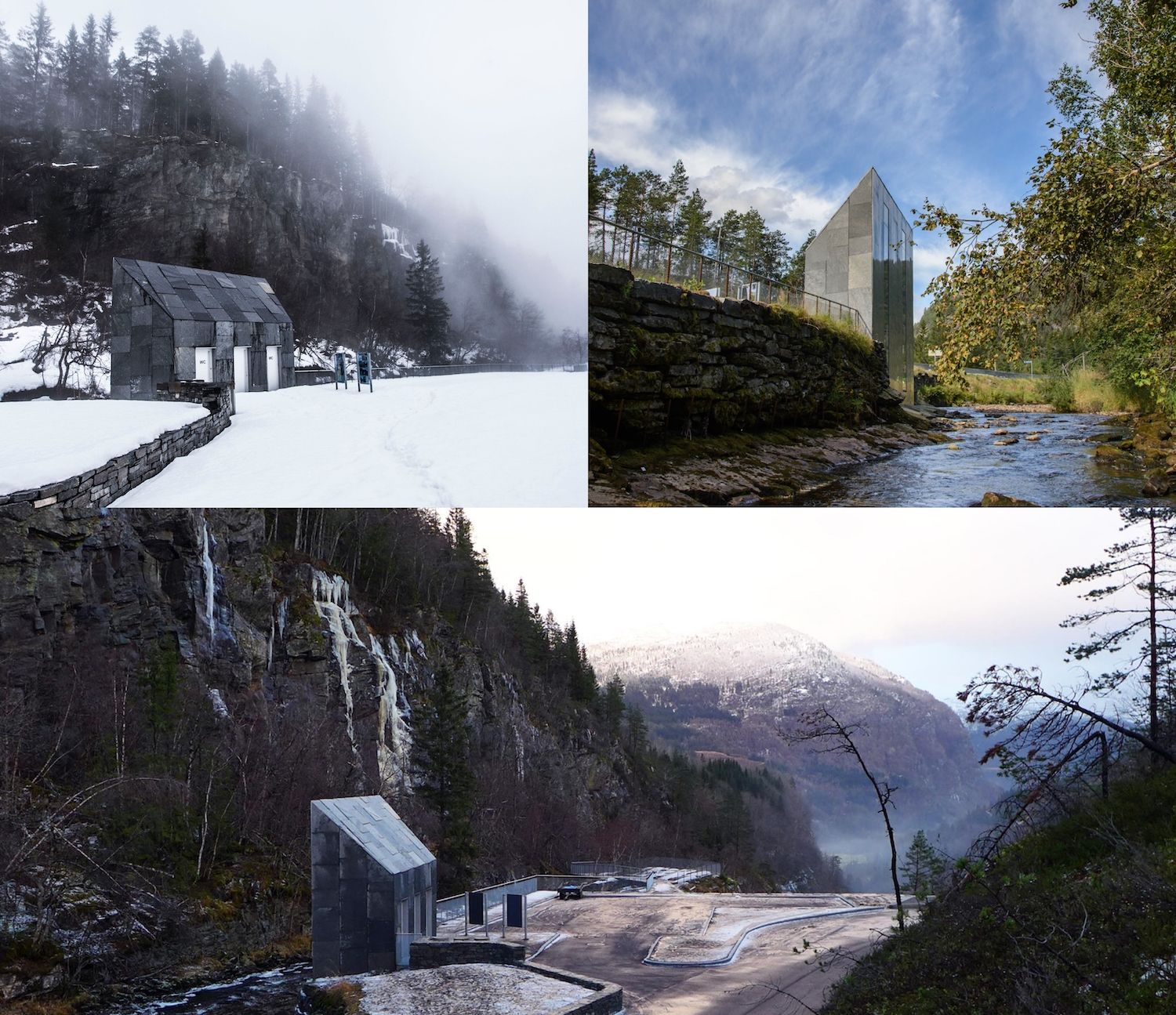 At Skjervsfossen waterfall, is a public toilet designed in 2016 by Fortunen. The stone-clad building rises up, mimicking the steep mountain that faces it. Users can take in the windows through the windows and the glass panels embedded in the concrete floor. 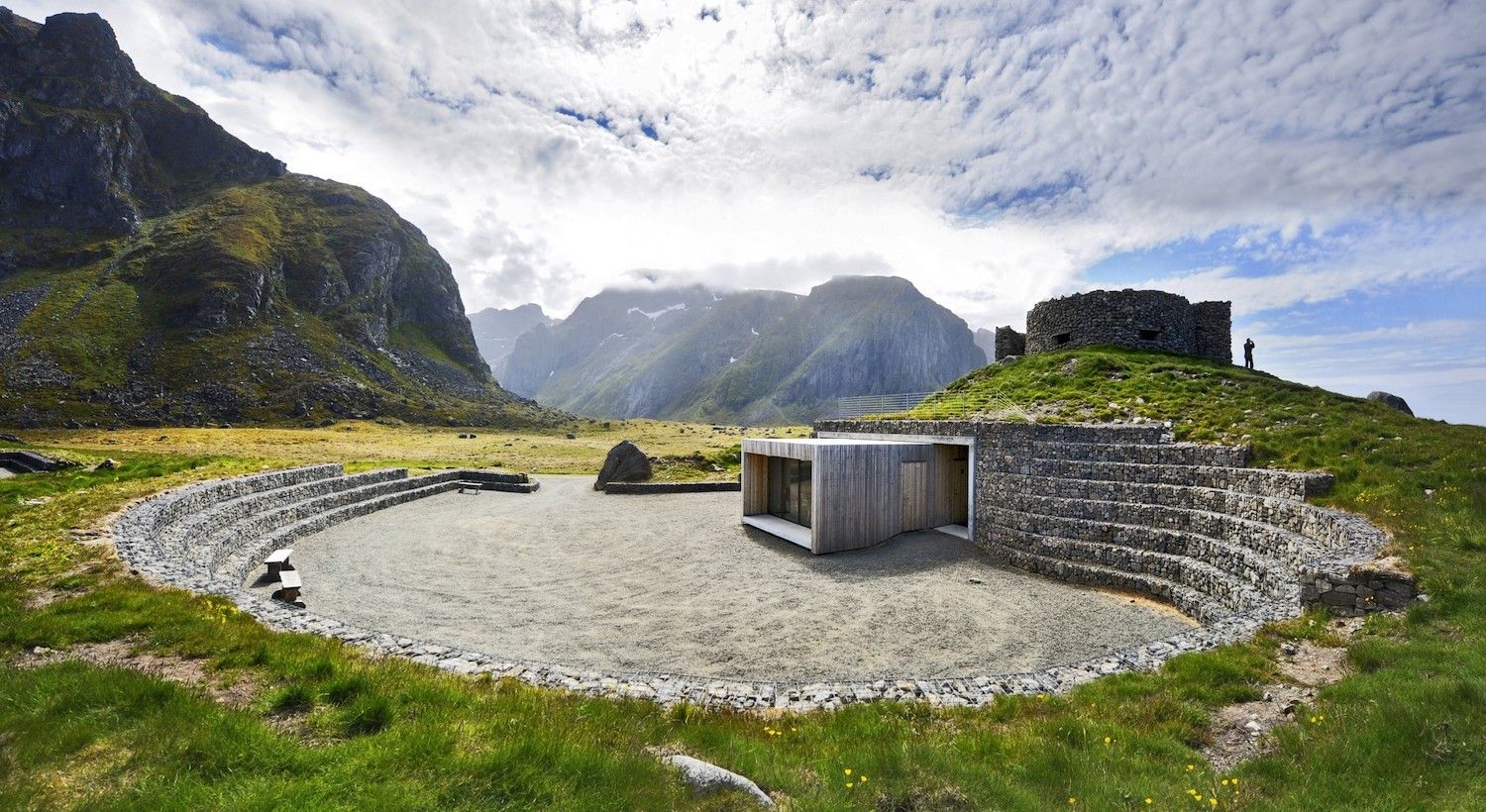 The public toilets along the Lofoten Scenic Route are equally spectacular. At the Eggum panoramic site is a public toilet complex designed by Snøhetta in 2007. The box-like projection is part of an amphitheater, all built with local stone and driftwood.

Japanese toilets are technological wonders to be experienced. No wonder then that Japan has the world’s largest toilet manufacturer in Toto Ltd. But along with the most modern toilets it’s not unusual to find old style squatting toilets in Japan, mostly in public parks and old buildings, resulting in people shunning those facilities. 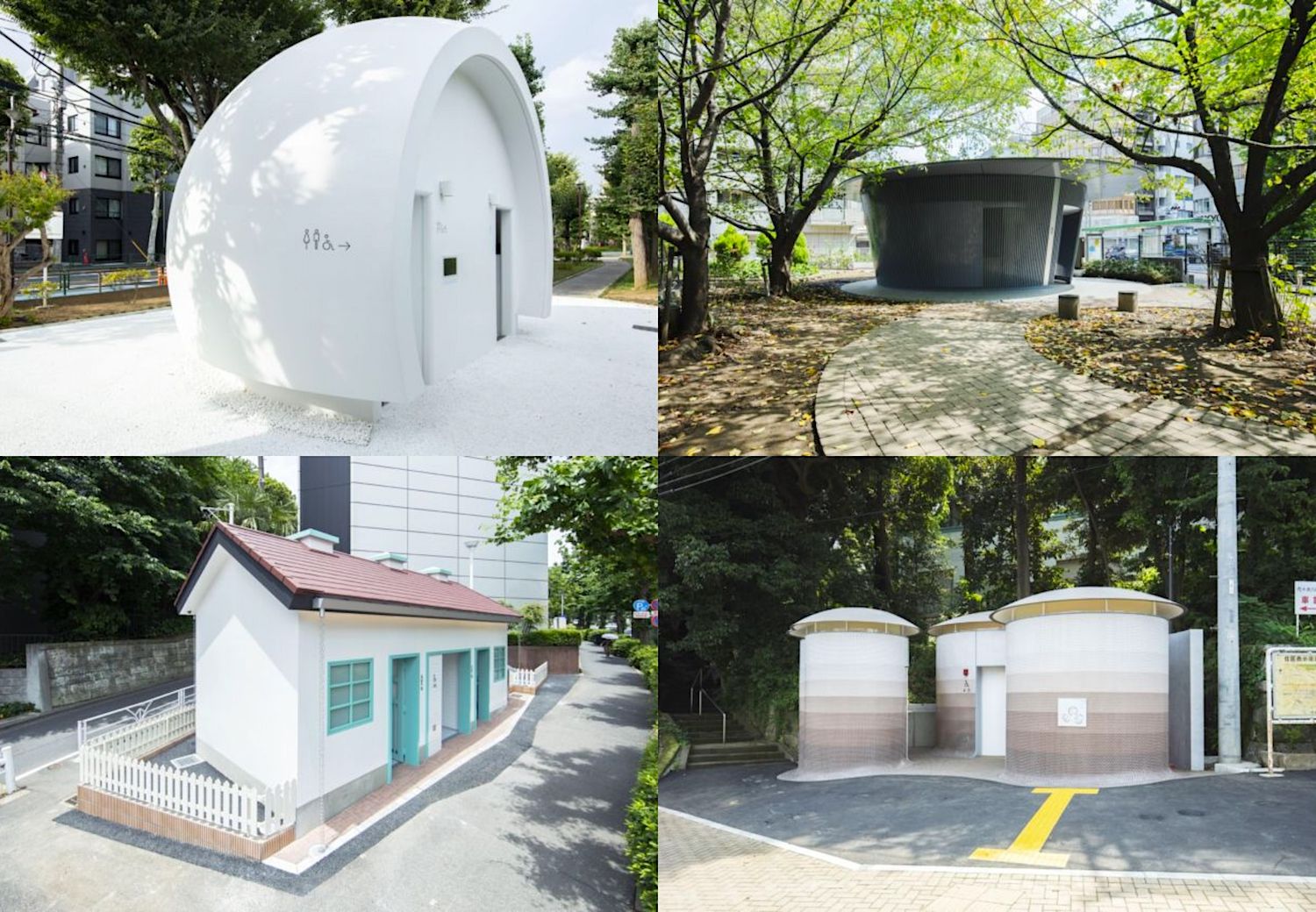 The Tokyo Toilet Project was an initiative by The Nippon Foundation to create and improve upon 17 public restroom facilities in the Shibuya district of Tokyo. Sixteen architects and designers, including Pritzker Prize winners, have developed toilets that have become must-visit locations. A house-shaped toilet; a toilet inspired by early Japanese architecture; a cedar-clad facility; a red triangular block based on the Japanese craft of Origata; a facility with frosted glass that shines at night; and the latest to open, a hemispherical, voice-activated toilet — they each has an individual style. 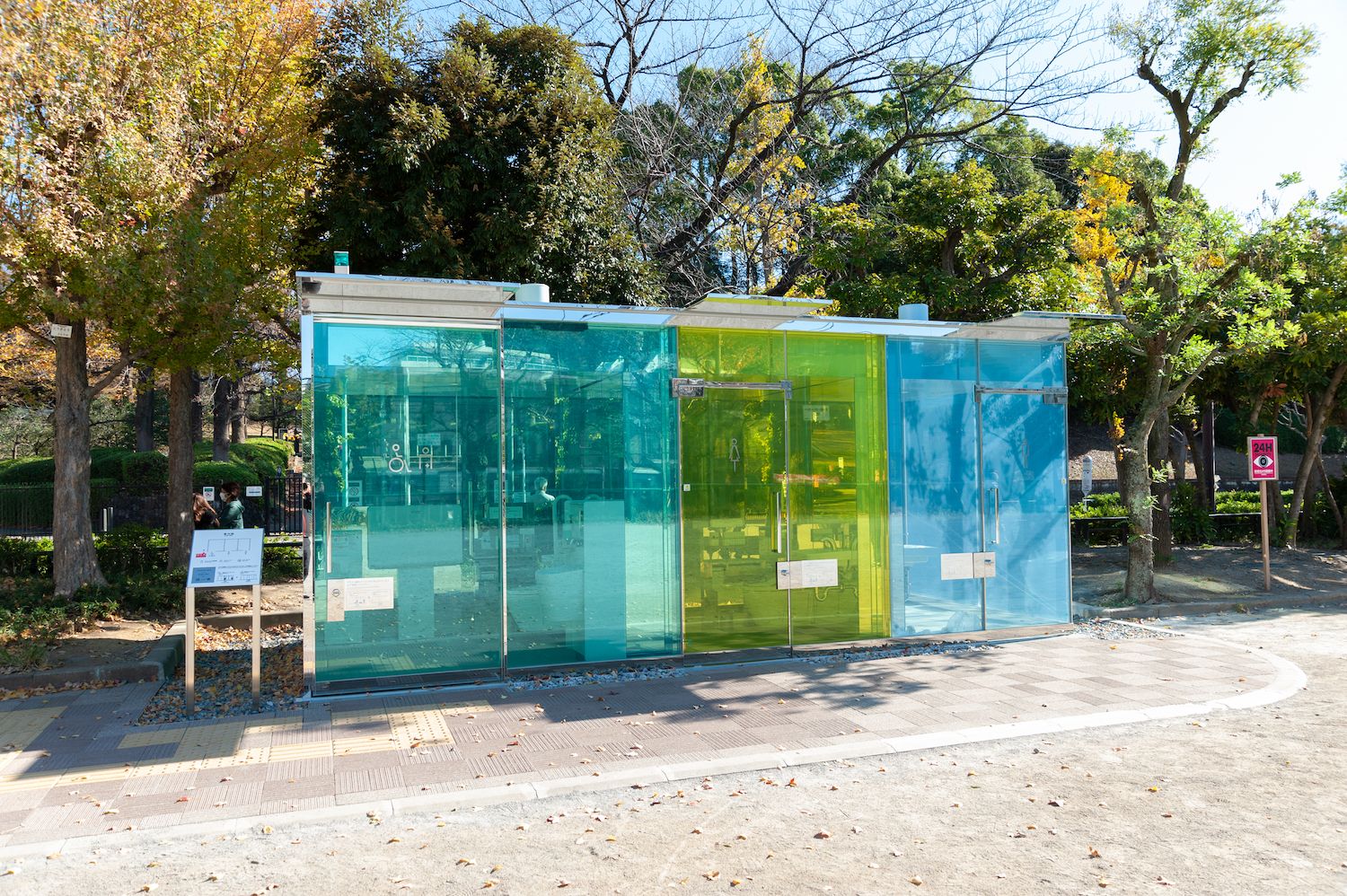 The three Pritzker winners’ contributions are in keeping with their fame. Tadao Ando’s design is a minimalist, elegant circular structure. Fumihiko Maki’s design of four pavilions connected by a single, thin, curved roof is known as the “Squid Toilet”, placed as it is in the “Octopus Park”. But the toilet design that has gone viral is done by Shigeru Ban whose transparent glass wall public toilets are simply extraordinary. When vacant, the toilet’s walls are clear. Once locked the glass frosts over, turning opaque and bathing the park in colorful light. 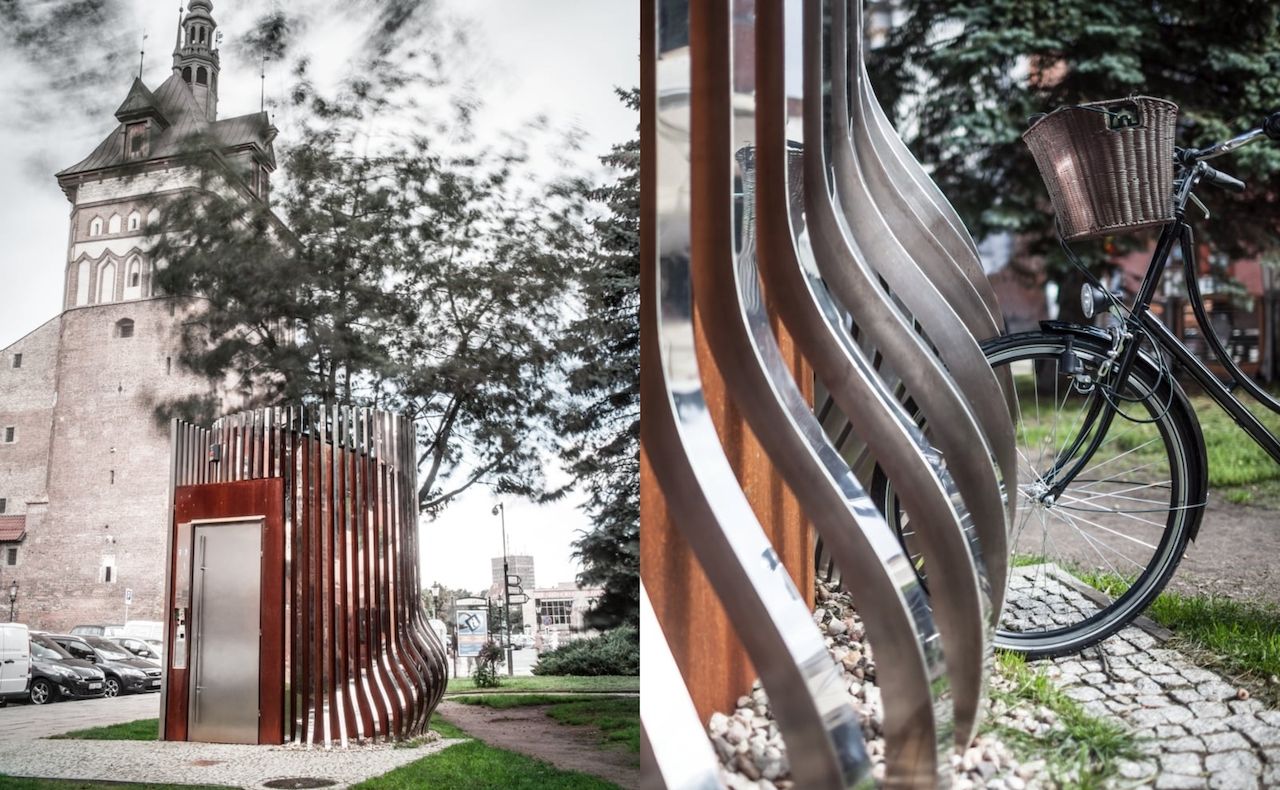 The city of Gdańsk commissioned the Schleifer & Milczanowski Architekci team to design public toilets in preparation for Gdańsk hosting the EURO 2012. They created the first public toilet within the historic center of the city balancing the modern infrastructure with the architectural heritage of the place.

The accessible toilet is enclosed within a prefabricated cylindrical form that bulges out at the bottom imitating a raindrop. The exterior is fitted with vertical, striated steel ribs that also function as a bike rack. They have a rusted patina and extend upwards to resemble tenement rooftops. The roof is transparent, negating the need for artificial lights. 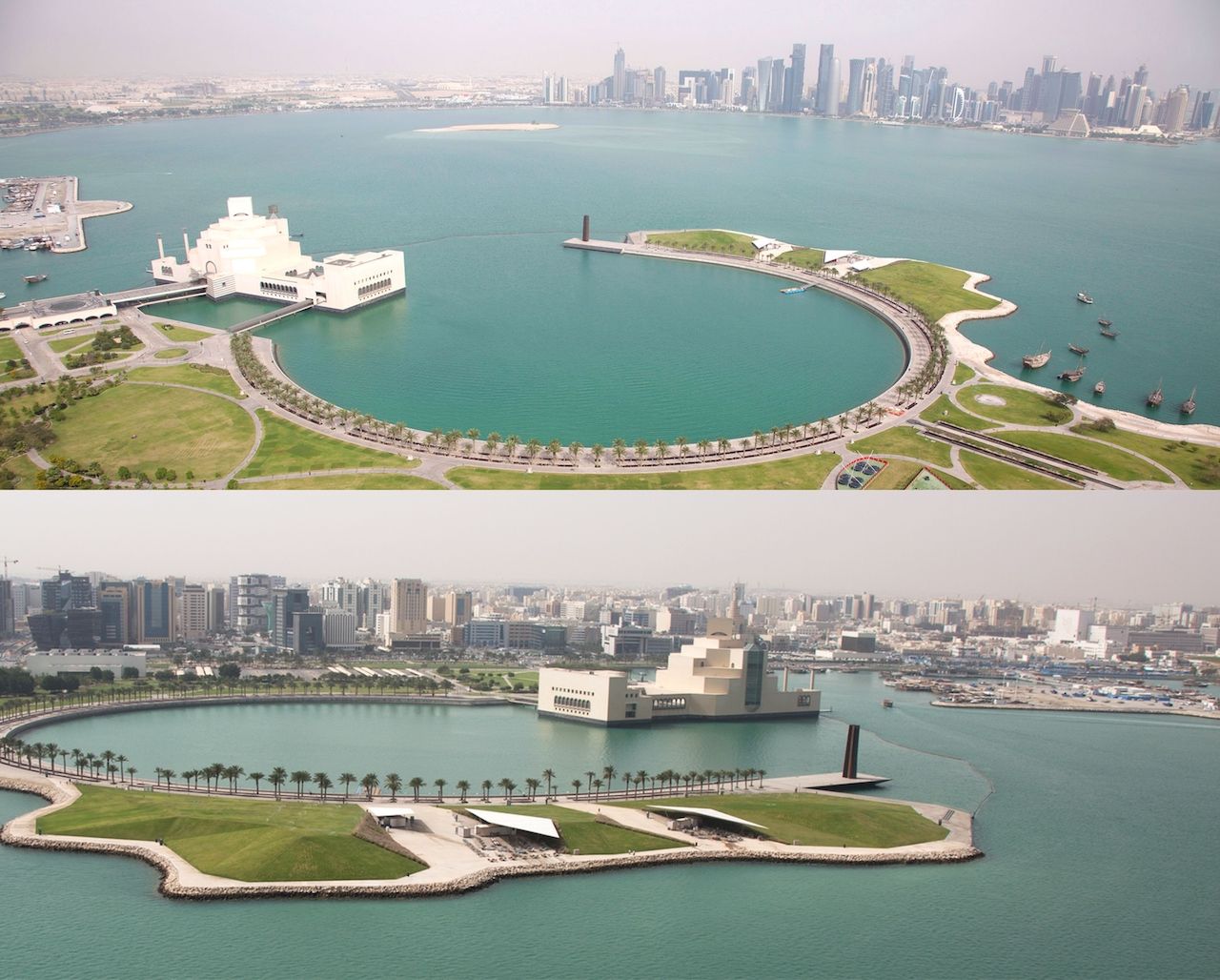 The Museum of Islamic Art Park is a 70-acre park adjoining the Museum of Islamic Art in Doha, Qatar. The museum is a masterpiece by the legendary I. M. Pei, architect of the Louvre pyramid. The MIA Park, a public space designed on an artificial extension on the Doha waterfront, was completed in 2012 and has kiosks serving as a cafe, a restaurant, and public restrooms.

The kiosks including the public toilets are placed under a series of triangular tensile structures that complement the flow of the surrounding hillocks. The exteriors of the restroom kiosks are decorated with flower motifs. 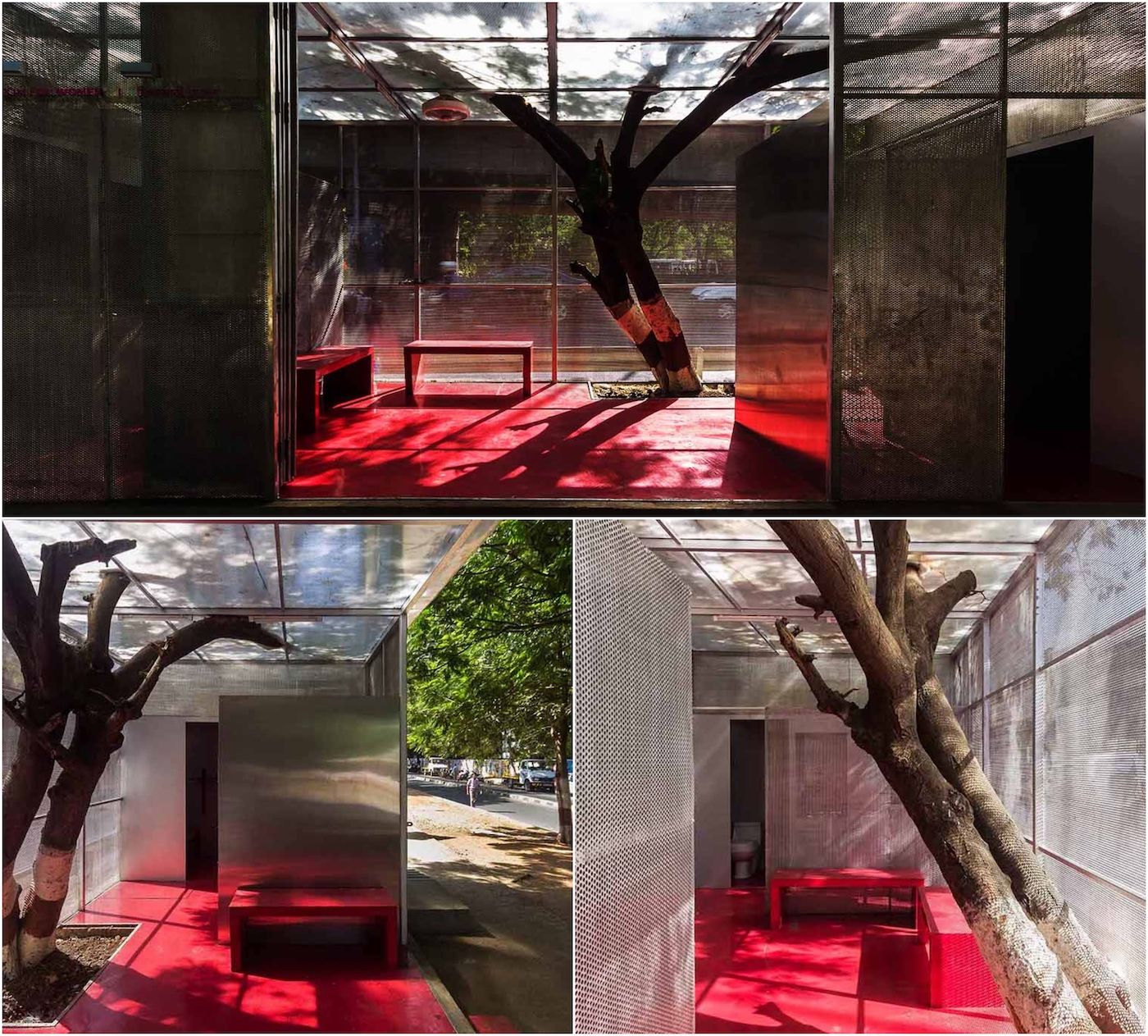 The Light Box Restroom is a concept from RC Architects, the studio of Rohan Chavan whose unique approach towards public sanitation has brought forth modern designs rooted in tradition.

The first of a series of public toilets built in several cities, The Light Box, created in 2016 is placed on the side of a busy highway in the Mumbai metropolitan area. Created exclusively for women, the restrooms function as a safe haven and a socializing area. The toilet block with its hot pink flooring is built around an existing tree that provides shade and aids in filtering the natural light. The complex of three toilets and a nursing room has a central garden used as a resting spot and provides gallery space for art.