Even if you don’t buy into the whole Lent business of depriving yourself of delicious foods and festivities for 40 days before Easter, you can still take part in the grand celebration that comes before it: Carnival. Most Christian cultures around the world have made the final celebration before the fast their own, and some are particularly worth seeking out for their sheer scale, exuberance, and originality. If you’re looking to tap into the spirit of a nation, want to celebrate before you stop eating chocolate for a month and a half, or simply let your hair down with thousands of local and international revelers, then these are the festivals you can still plan for this year. 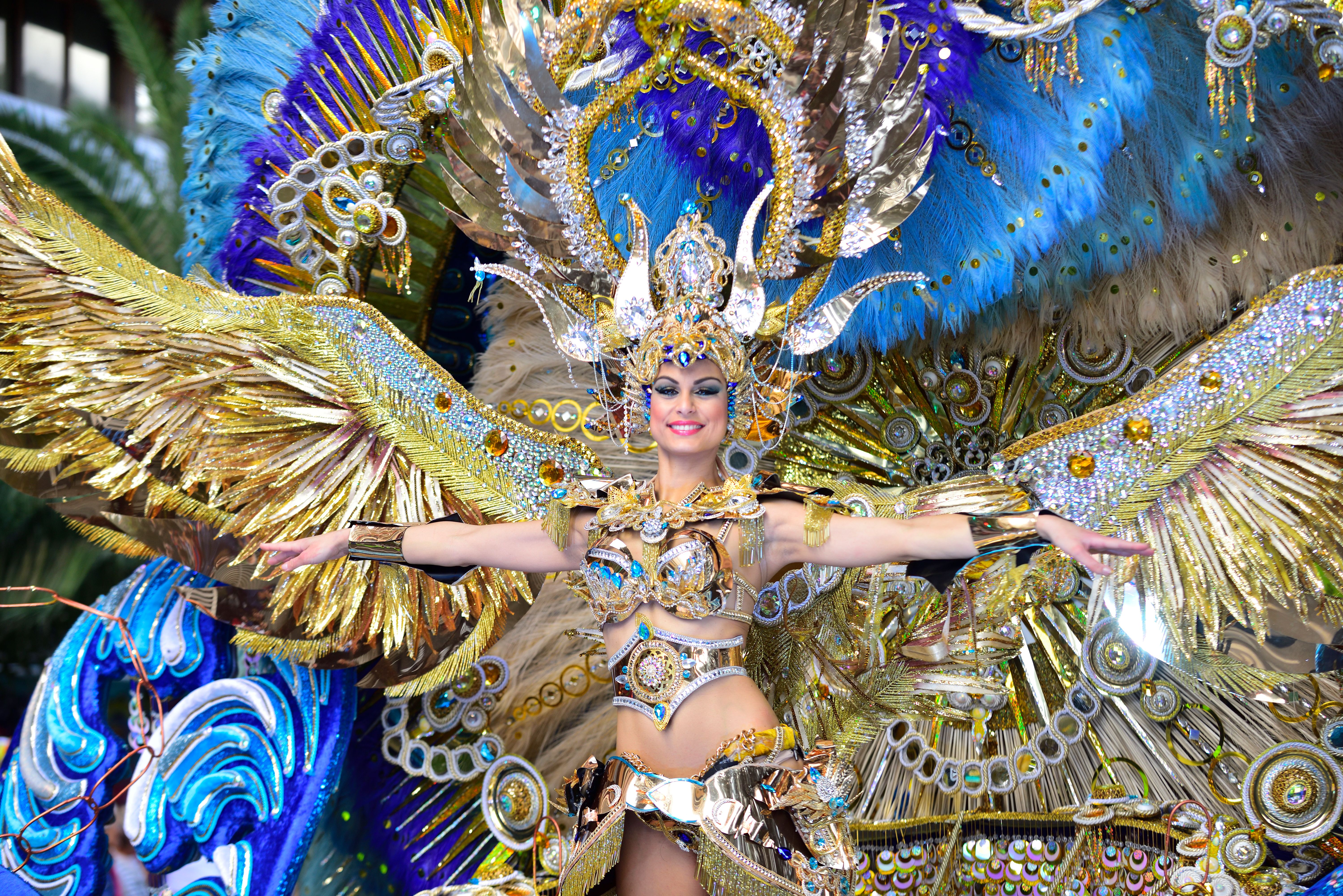 When a Carnival proudly proclaims that everything is allowed and your only obligation is to have fun, you know you’re in for a good time. That’s the tagline adopted by the Tenerife Carnival that takes place from February 27 to March 10 this year in the Canary Islands. This year’s theme is “The Flirty ‘50s,” so you can expect to see fun costumes inspired by the era left and right. Though Carnival will officially kick off on the 19th with the naming of the Carnival Queen, the festivities were set in motion on January 24 with a gala featuring the 36 aspiring queens. Even if you miss the crowning, the following weeks are full of dance and music performances, children’s events, car shows, and other festivities.

On February 26, celebrants can participate in the “Burial of the Sardine,” a Spanish tradition that consists of people dressed as mourners parading a mock sardine through the streets and burying it, symbolically erasing all the excesses of the Carnival season. And on March 1, the whole thing ends with a bang at the Grand Carnival Party 2020. The Tenerife Carnival has the reputation to be the most Brazilian of all Spanish carnivals, so it’s pretty clear that attendees should brace for some serious partying. For the schedule of all the events, check out the program online. 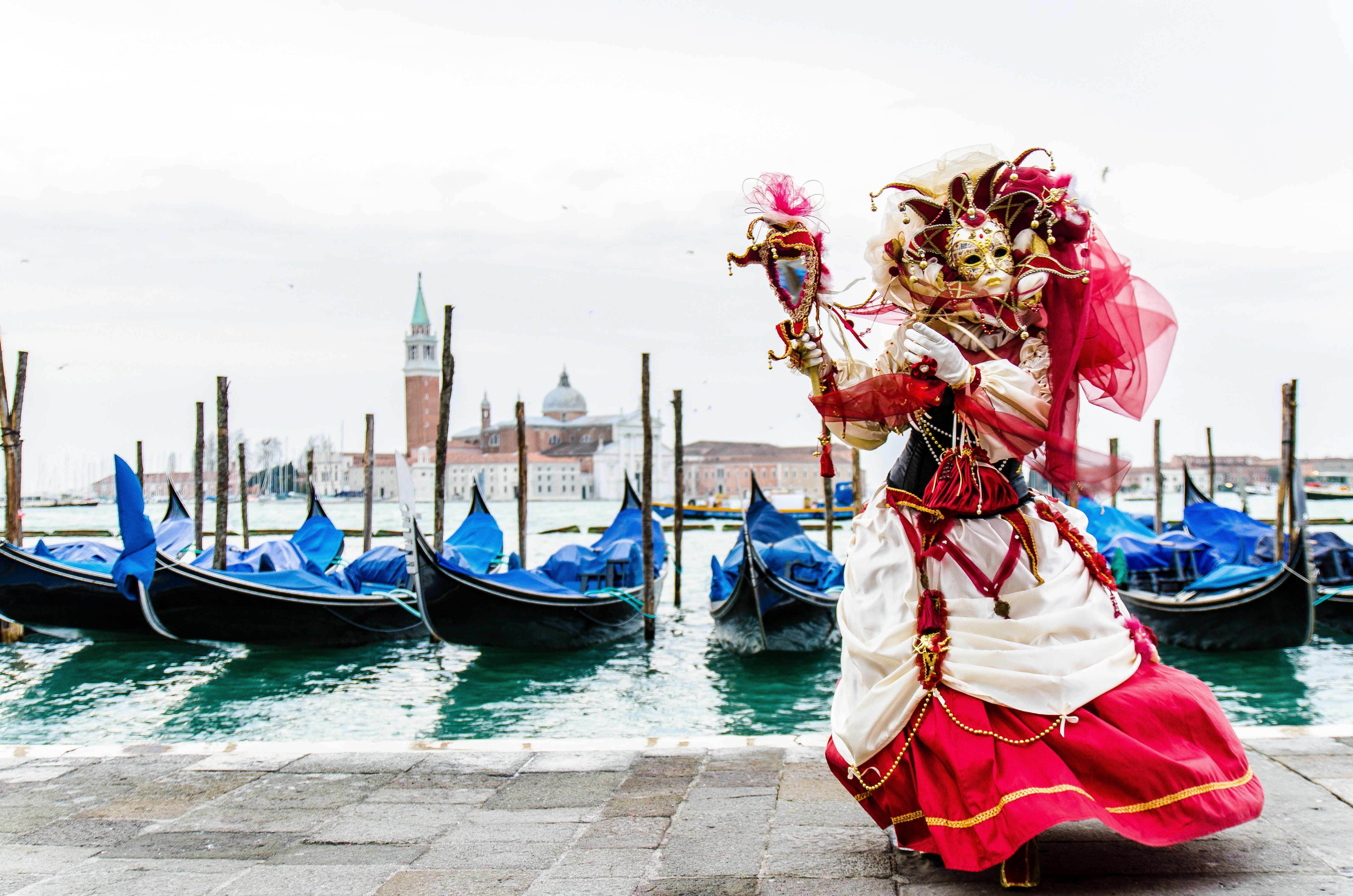 Most tourists know Venice as a labyrinth, canalized city to visit for living history, romantic gondola rides, and architecture. But for the thousands who make it to the annual Venice Carnival, it takes on a whole new appearance. That’s because the festival, which dates back to the 1100s and sports a long list of notorious attendees, including Casanova, is renowned for the wearing of intricate masks. The festival takes place in the days leading up to Fat Tuesday, and you can expect elaborate costumes and plenty of late-night parties spurred on by the excitement of anonymity that only a mask can offer. This year, the Venice Carnival takes place February 8-25, and you can view the full schedule online. 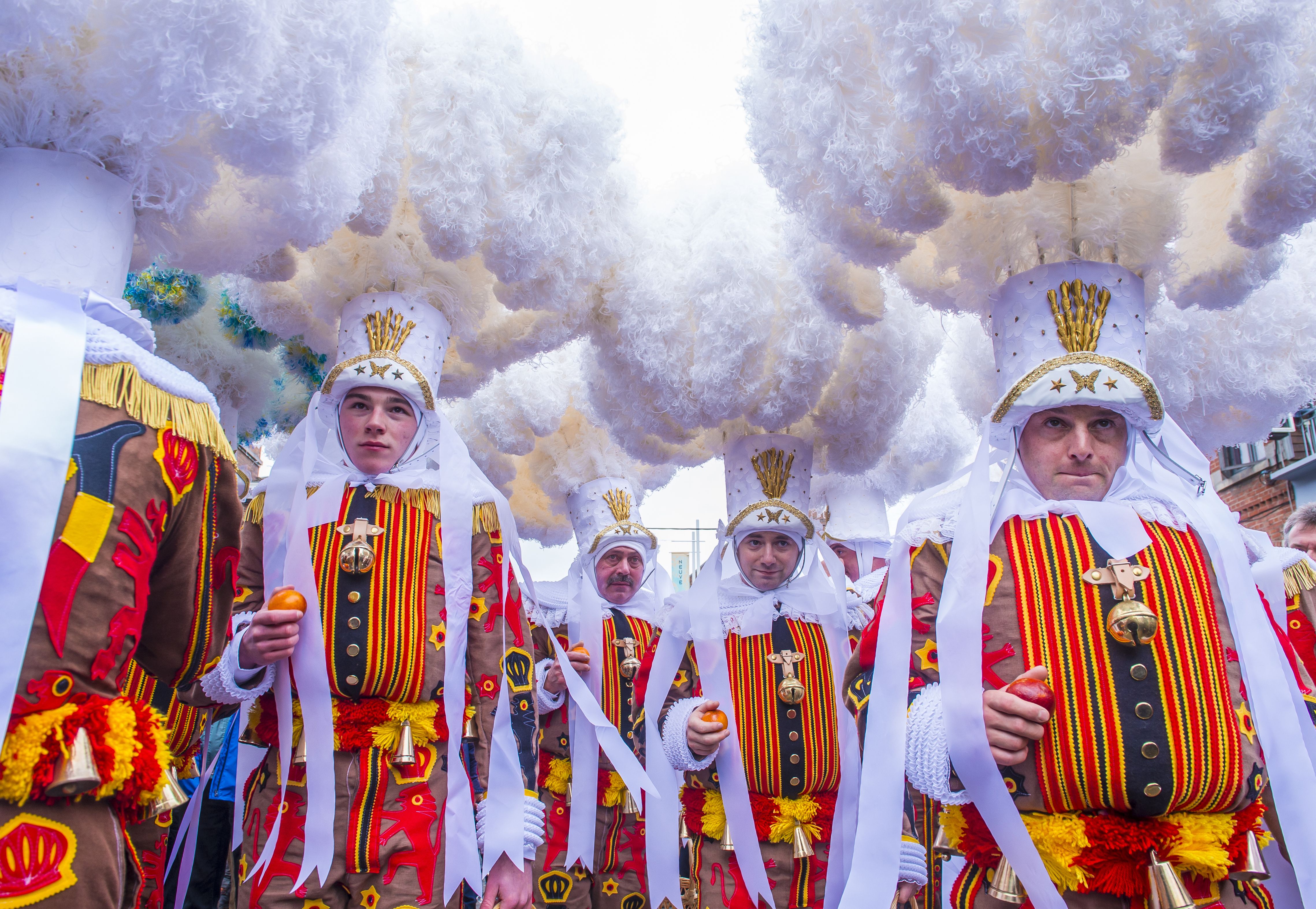 The Carnival of Binche is a popular event that takes place each year in the small Belgian town of Binche. For nearly eight weeks, the city’s residents ready themselves with several quirky traditions, including small parades with live music and performances. But between Shrove Sunday (February 23) and Fat Tuesday (February 25) the city transforms, as beautifully costumed and masked paraders take over the streets to the sound of drums and violas. Fat Tuesday (also called Shrove Tuesday), the third and final day of the festivities, is always the most important. It’s on this day that characters known as “Gilles” don wax masks, put on bright costumes with bells and clogs, wield sticks to ward off evil, and congregate and dance on the Grand Place with other participants under fireworks. The festival dates far back into Belgian history with remarkably little changes over the years, which has earned it a UNESCO declaration as a “Masterpiece of the Oral and Intangible Heritage of Humanity.” The full schedule is available online.

Mardi Gras in New Orleans, Louisiana is one of the most famous carnivals out there — people travel from around the world to experience the floats, late-night parties, and famous beads that cover the whole city and its people. Although Mardis Gras has its roots in Europe, the annual festivities that take place in New Orleans are truly unique.

According to the 2020 schedule, the Mardi Gras Carnival officially started on January 4 with the Fools of Misrule parade, which saw costumed celebrants march through Covington in the greater metropolitan area to live tunes played by an accompanying brass band. The season of parades, marching bands, and street parties come to a climax on Fat Tuesday (February 25), and the party ends when the clock strikes midnight with the mayor and police riding on horseback through the French Quarter. And yes, you can drink in the streets. 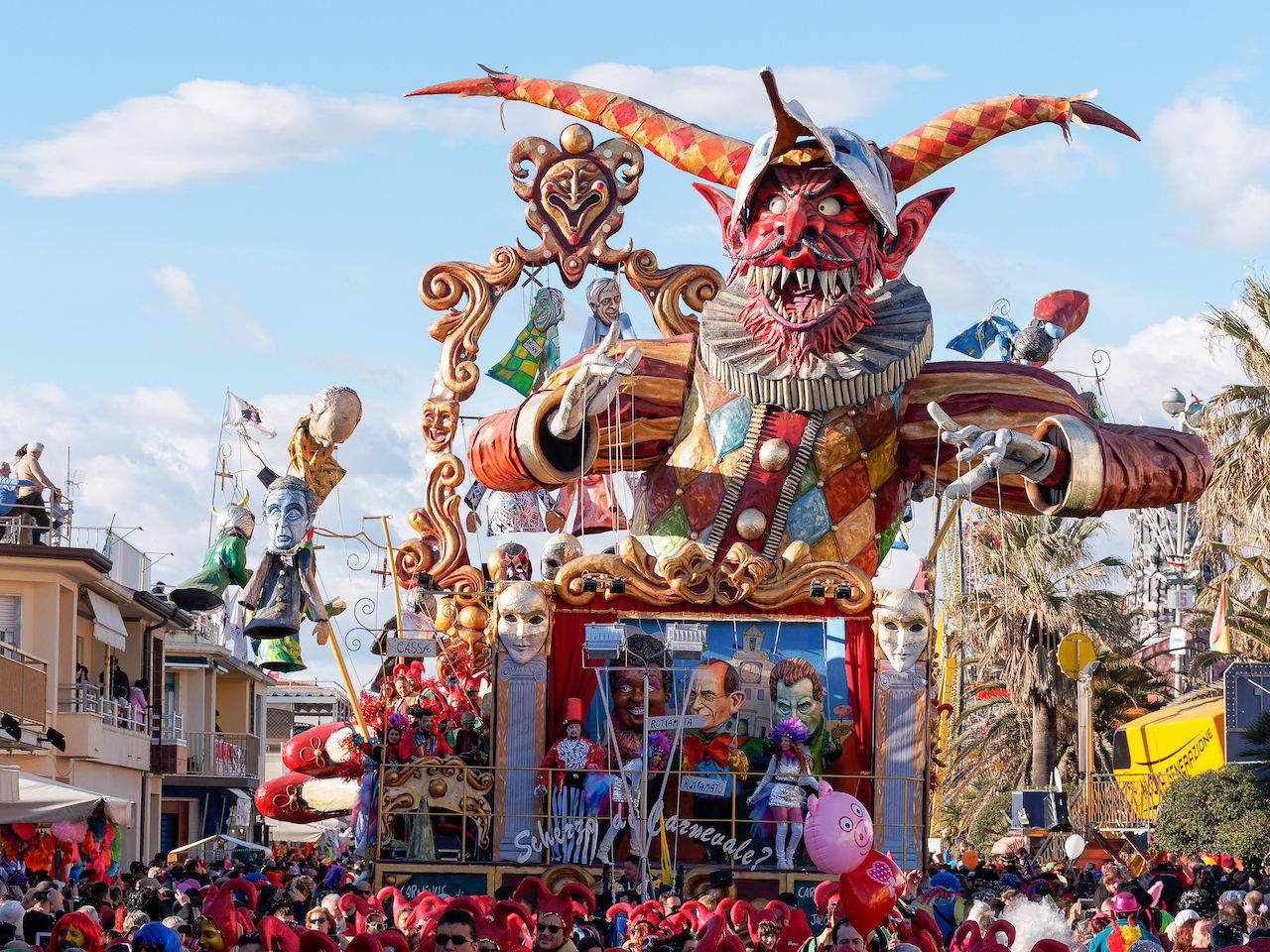 The annual Viareggio Carnival in the Tuscan city of Viareggio is a huge deal in Italy. Not only is there a complex of 16 hangars, dubbed “La Cittadella,” dedicated to the event and the construction of the huge and famous papier-mâché floats, but the Viareggio Carnival is broadcast live on TV throughout Italy every Fat Tuesday. Each year, the event attracts 600,000 spectators to the celebrations that take place until Fat Tuesday in the city’s various districts. Most restaurants, bars, and clubs get in on the action by throwing their own masked Carnival parties. The highlight of the Viareggio Carnival are the parades of massive papier-maché floats that travel on a circular, one-mile route through the city. This year, the parades are scheduled for February 15, 20, 23, and 25. A full list of events is available online. 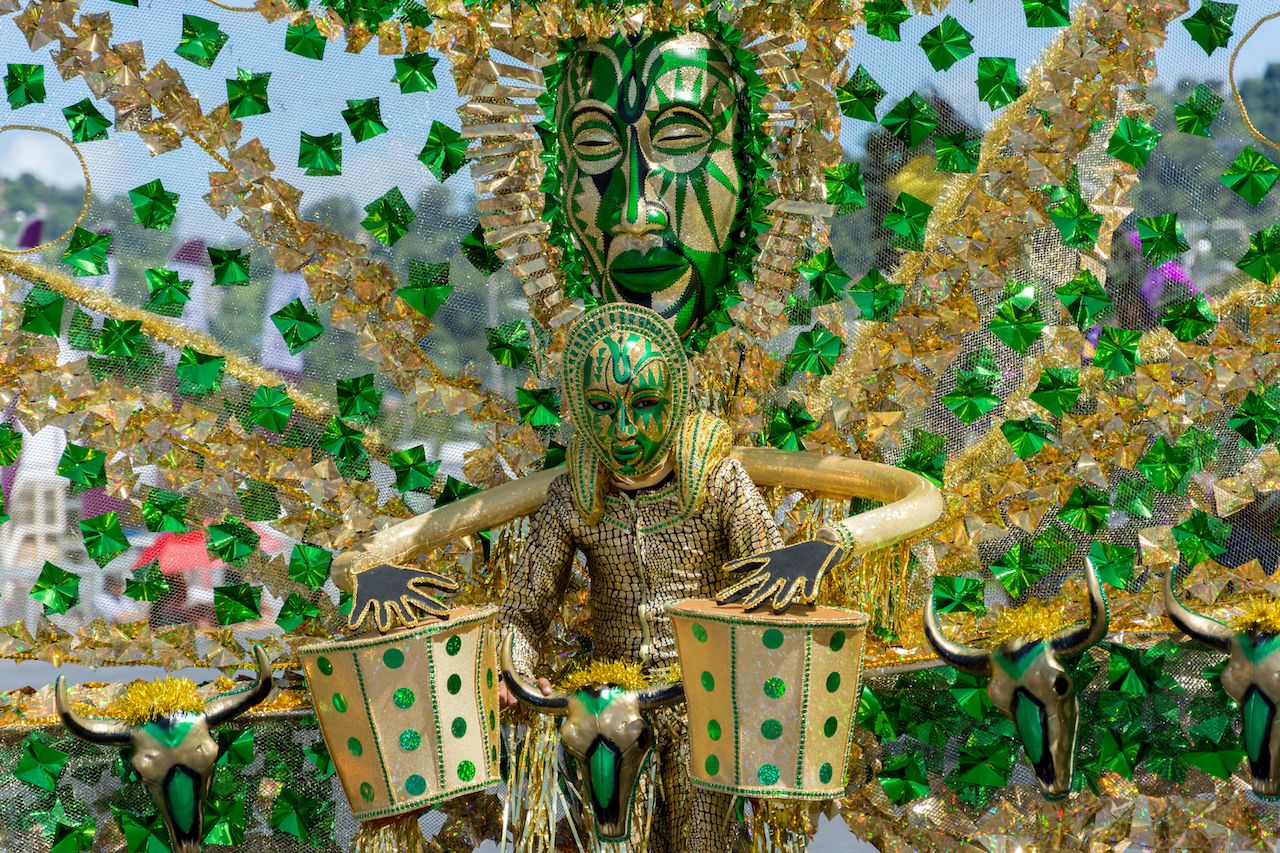 The Trinidad and Tobago Carnival starts just after Christmas and continues until Ash Wednesday, but it is officially celebrated on the Monday and Tuesday before (February 24 and 25 in 2020). This Carnival, known as the biggest street party on earth, attracts hordes of people on the Port of Spain to celebrate every year. Carnival Monday opens with a 4:00 AM parade of revelers covered in mud, paint, and grease. This early morning spectacle lasts until sunrise, at which point most people retreat for a few hours of rest. On Monday afternoon, and all day on Tuesday, thousands of masqueraders dress up in bright costumes and head out into the streets. Participants typically dance along the parade routes to the sound of soca, steelpan, and calypso music. One unique aspect of the Trinidad and Tobago Carnival is that anyone can get involved in the parade by purchasing a costume from one of the Carnival bands. Check out the full schedule of events. 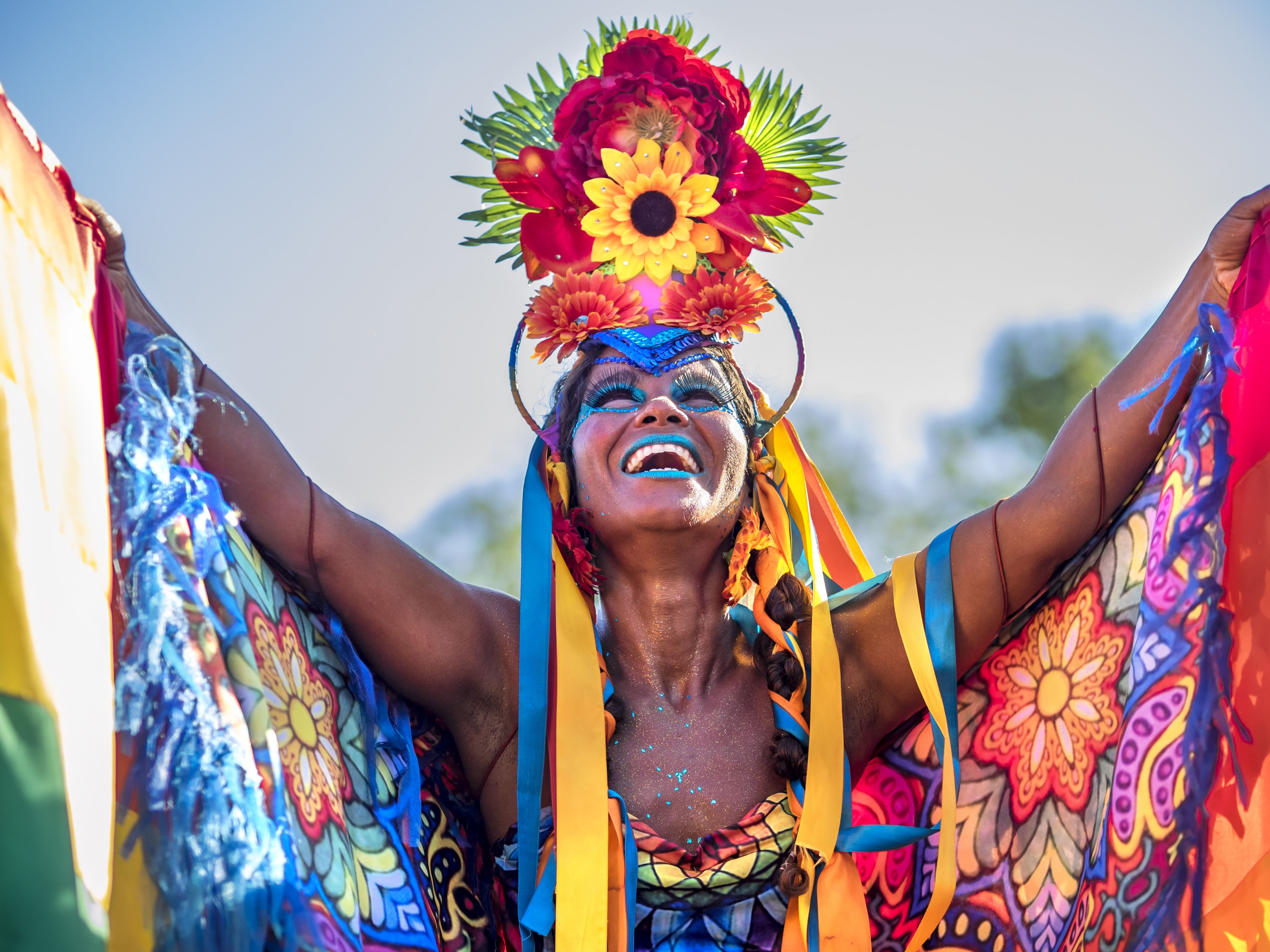 Outside of Rio, the most famous Carnival in Brazil is the Carnaval Salvador, in the northeastern state of Bahia. Like in Rio, the event comes complete with samba groups, grandstands, and plenty of festive costumes. But since Salvador is a small city, the entire place becomes one big party — the event attracts more than one million tourists. In Salvador, anyone can dance in the streets. You can go as a pipoca and dance in the crowds for free, or you can buy a T-shirt and join in a bloco to be more formally attached to a particular dance group. (Just carry zero valuables with you and go with a friend for safety.) The final, and more expensive option, is to buy seats in a camarote. Brazilians will tell you nothing beats the Carnival energy in its northeastern states, and the one in Salvador is a week-long party that lasts all day and all night. This year, the Salvador Carnaval officially starts on February 20, but a few events begin even earlier on the 15th and 16th. Then festivities end on February 26, Ash Wednesday. The full schedule of events is available online.

A version of this article was previously published on February 6, 2019, by Andrew Thompson, and was updated on February 13, 2020, by Alex Bresler.

FestivalsThe 6 Must-See Carnival Festivals in Italy
Tagged
Festivals Holidays
What did you think of this story?
Meh
Good
Awesome