Many of us rang in 2020 weeks ago, already made and broke our resolutions for the year, but according to the lunisolar calendar, it’s still 4717, or 2019 in Gregorian terms.

Chinese New Year, aka Lunar New Year or Spring Festival, traditionally entails a 15-day celebration starting with the new moon in late January or February and ending with the following full moon. It’s all about spending time with loved ones over auspicious meals, spring cleaning and decorating, holiday shopping, and little red envelopes filled with “lucky money.” Plus lots and lots of firecrackers on Chinese New Year’s Eve — and maybe even some pyrotechnics.

These traditions have made their way around the globe, meaning exciting festivities throughout the month of February from the west coast of Canada to Southeast Asia. Wherever you are on January 25 to welcome the Year of the Rat, put on something red for luck and party like it’s 4718. 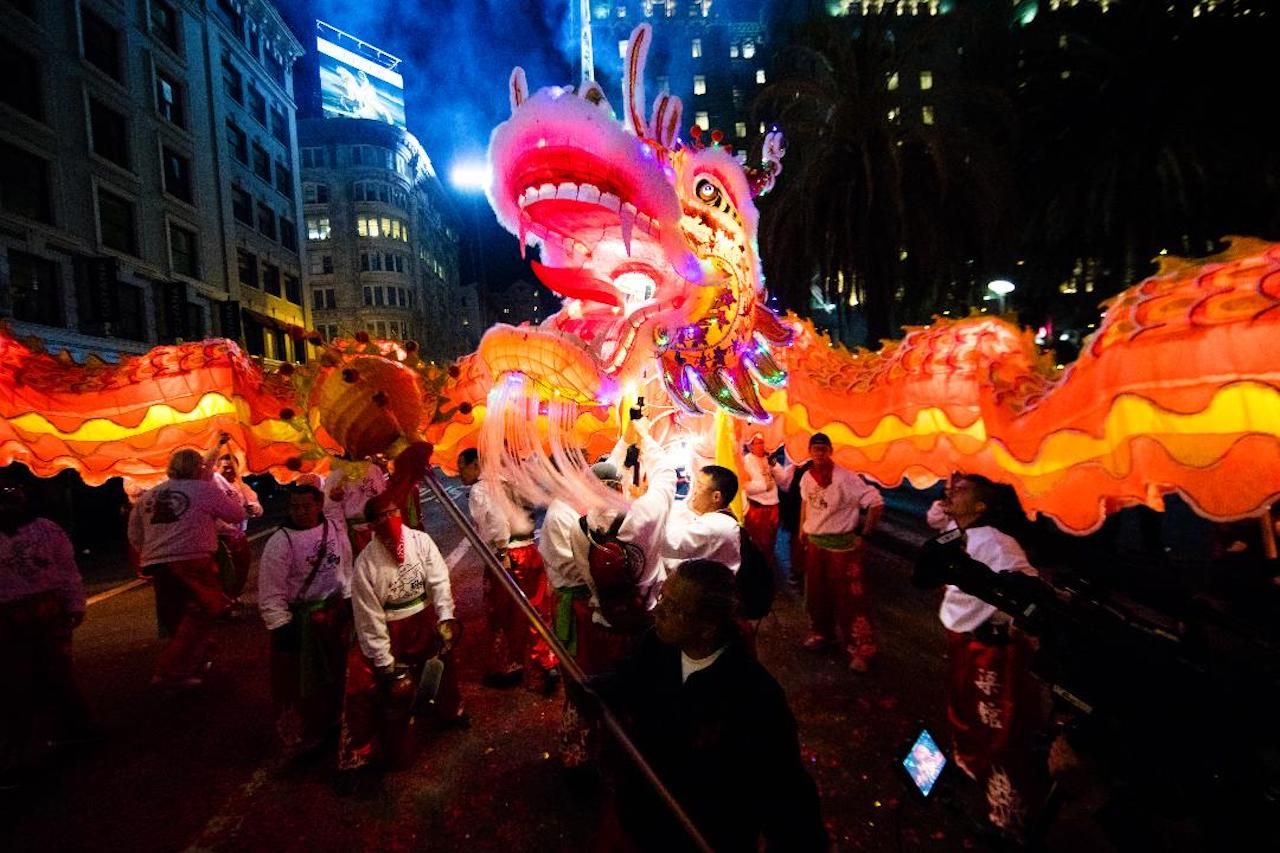 Chinese New Year celebrations in San Francisco began not long after the California Gold Rush frenzy, which attracted its fair share of Chinese immigrants, fizzled out. More than 150 years later, the festivities are a highlight of the city’s social calendar. The biggest annual event is the Southwest Airlines Chinese New Year Parade, scheduled for February 8 this year. It’s a riot of bright costumes and showy floats, dragons, drummers, stilt walkers, martial artists, and spellbound spectators that kicks off at Second and Market, wraps around Union Square, and ends in Chinatown. Keep an eye out for Gum Lung, a 288-foot-long dragon that requires a hefty crew to snake it through the streets of SF while firecrackers explode all around.

The parade’s not all the city does to celebrate, though. There’s also a Miss Chinatown USA pageant followed by a coronation ball on February 7. Things don’t officially wrap up until February 9 with the Chinese New Year Community Street Fair. For a complete list of the events on offer, check out the calendar on the website. But however you celebrate, don’t leave the city before getting dim sum. 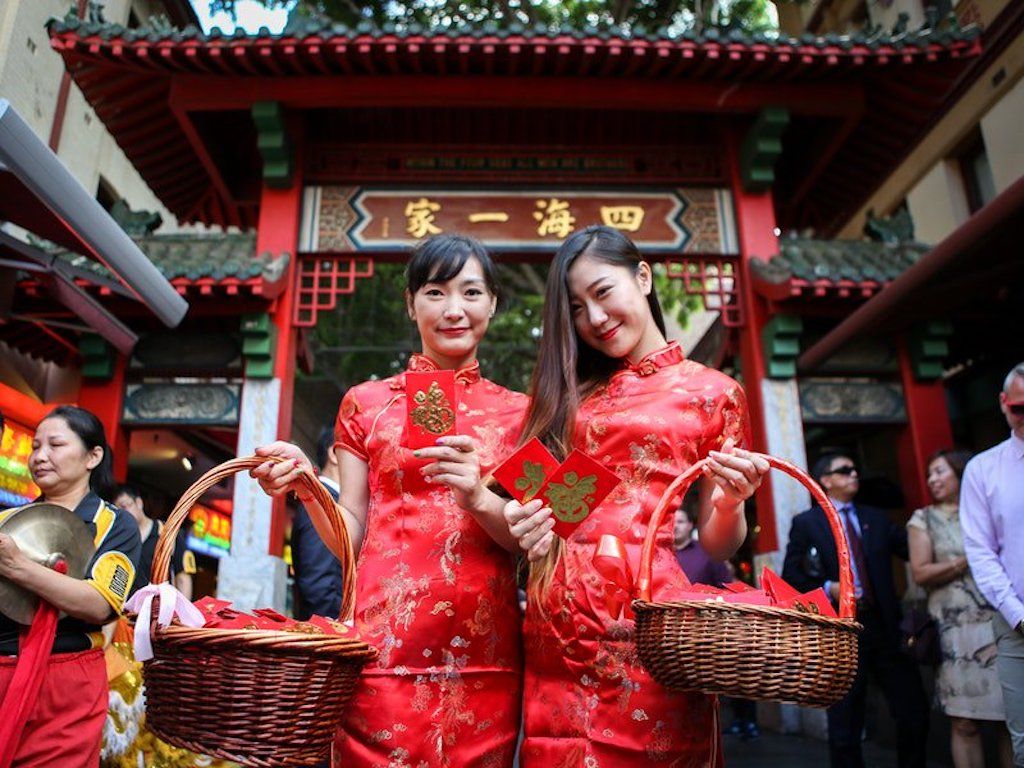 Add the Sydney Harbour to any celebration, and it instantly improves. The city makes good use of its standout water feature during the annual Lunar New Year Festival, which, this year, will be held from January 25 to February 9. One of the most exciting events is the dragon boat regatta, attended by thousands of racers and as many spectators. Come out to Cockle Bay Wharf the first weekend in February to watch boats ornamented with dragon heads and colorful scales tear through the water, powered by as many as 20 paddlers, while beating drums sound from land.

Elsewhere, tour the Lunar Lanterns display — a series of massive, modern lanterns depicting the 12 animals of the zodiac lining Circular Quay — from the pig lantern at the Sydney Opera House over to The Rocks. The epic festival also has pop-up food and drink events in Chinatown, night markets, LED lion dances, orchestra performances, and calligraphy workshops. To see all the events on offer, check out the website. 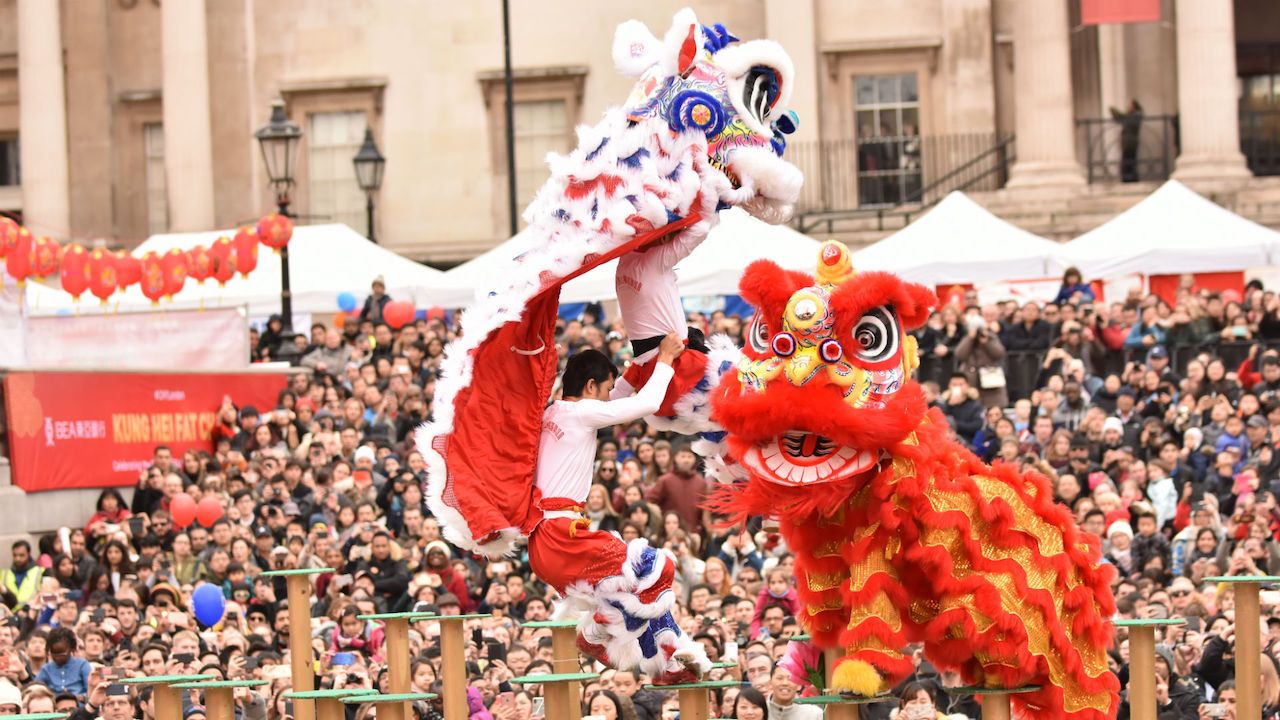 London’s Chinatown is walking distance from attractions like Big Ben, Westminster Abbey, and Hyde Park. By the time January 25 rolls around, however, you’ll want to stick around Chinatown for the Chinese New Year party. Buckle up for lion dances, acrobatics, interactive stage shows, firecrackers, and parade-trailing through Chinatown and the West End. The West End also happens to be the best place for families and anyone who wants to see martial arts demonstrations. For more stage shows and general fun, try Trafalgar Square, but head back to Chinatown when you get hungry. Check out the website for a complete list of this year’s events. 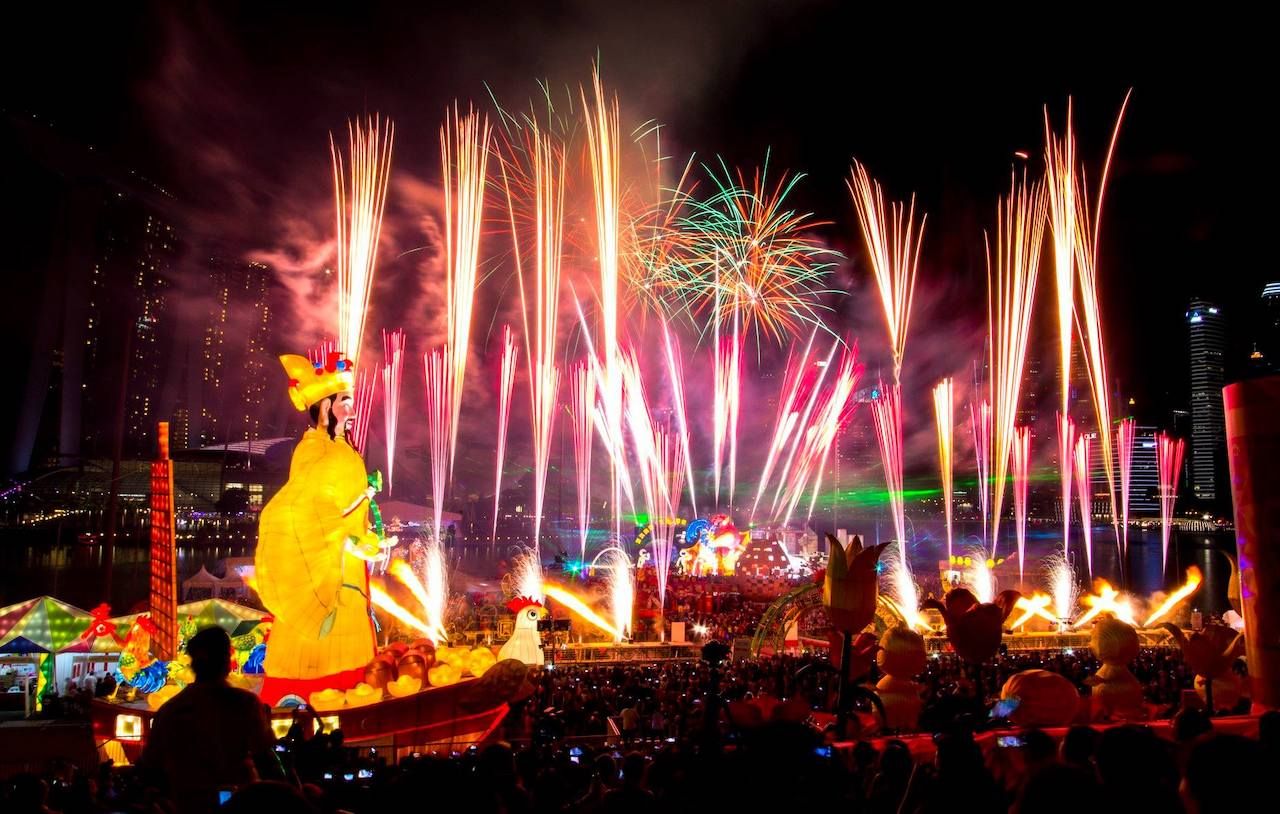 Singapore milks Spring Festival for as many days of holiday cheer as it can. Lanterns can go up weeks in advance in anticipation of Chinese New Year — get a good look from New Bridge Road, Garden Bridge, or Eu Tong Sen Street. But like any NYE reveler will attest, celebrating the new year is more about the night before than the morning after, and Singapore puts on a killer Chinese New Year’s Eve. Those lucky enough to participate can follow confetti-filled processions through Chinatown, gaze at festive market stalls, and catch song and dance shows at Kreta Ayer Square. Elsewhere, the River Hongbao festival promises constant entertainment of its own, be it opera performances, fireworks over the marina, carnival games, or good food. To close out the festivities, the complementary Chingay Parade, one of the largest celebrations in Singapore, will pass through town on January 31-February 1. This year’s theme is “Colours in Harmony.” Take a closer look at the events schedule here. 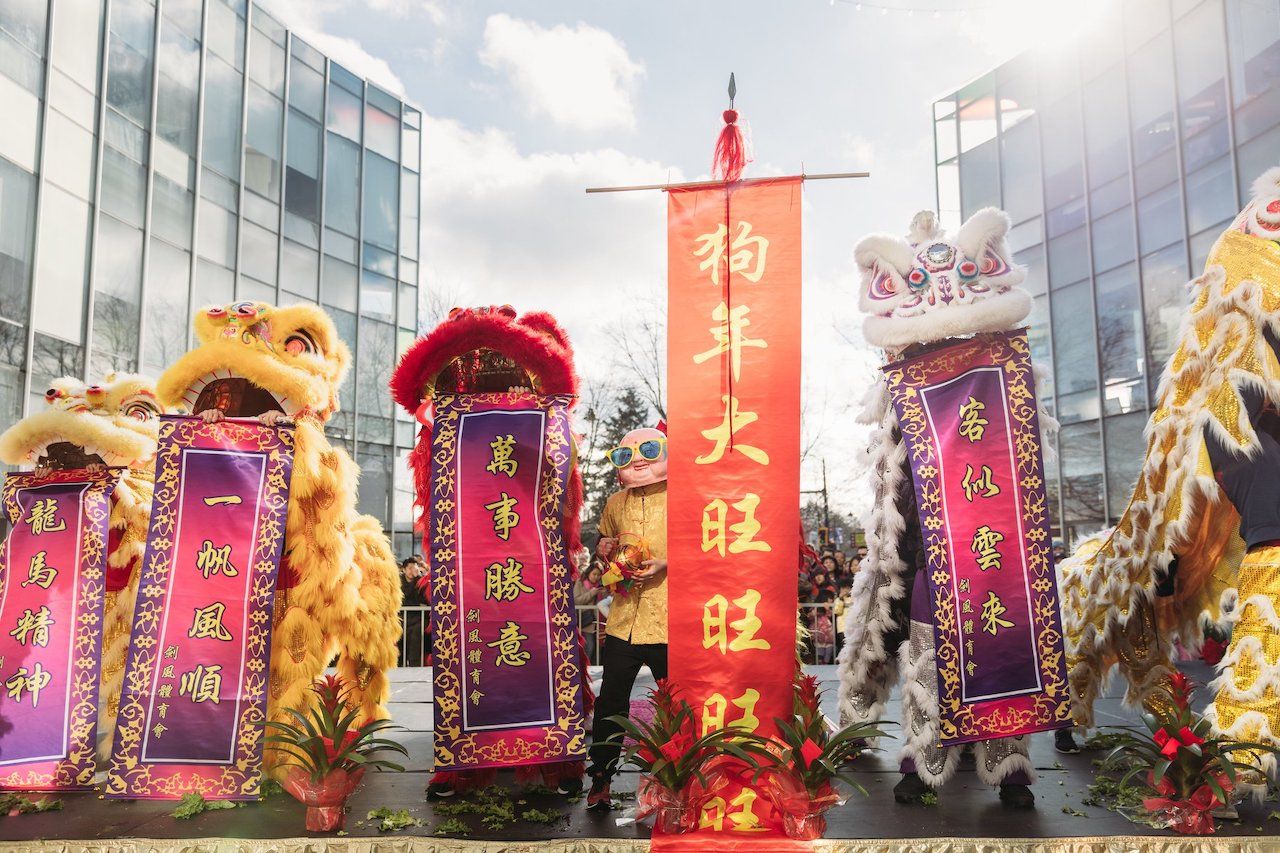 For nearly 50 years, Vancouver has hosted the Chinatown Spring Festival Parade to welcome the new year with gusto. This year, the parade starts at Millennium Gate around 11:00 AM on January 26 and lasts roughly two and a half hours, traversing almost a mile start to finish. Marching bands set the tempo while costumed dancers and martial artists entertain the crowds. Other ways to celebrate this month include visiting the Chinese New Year Flower and Gift Fair at the Aberdeen Centre, on until the 26th, or checking out the lantern display at Jack Poole Plaza up until February 9. For a complete list of events, see the Lunar New Year Festival website. 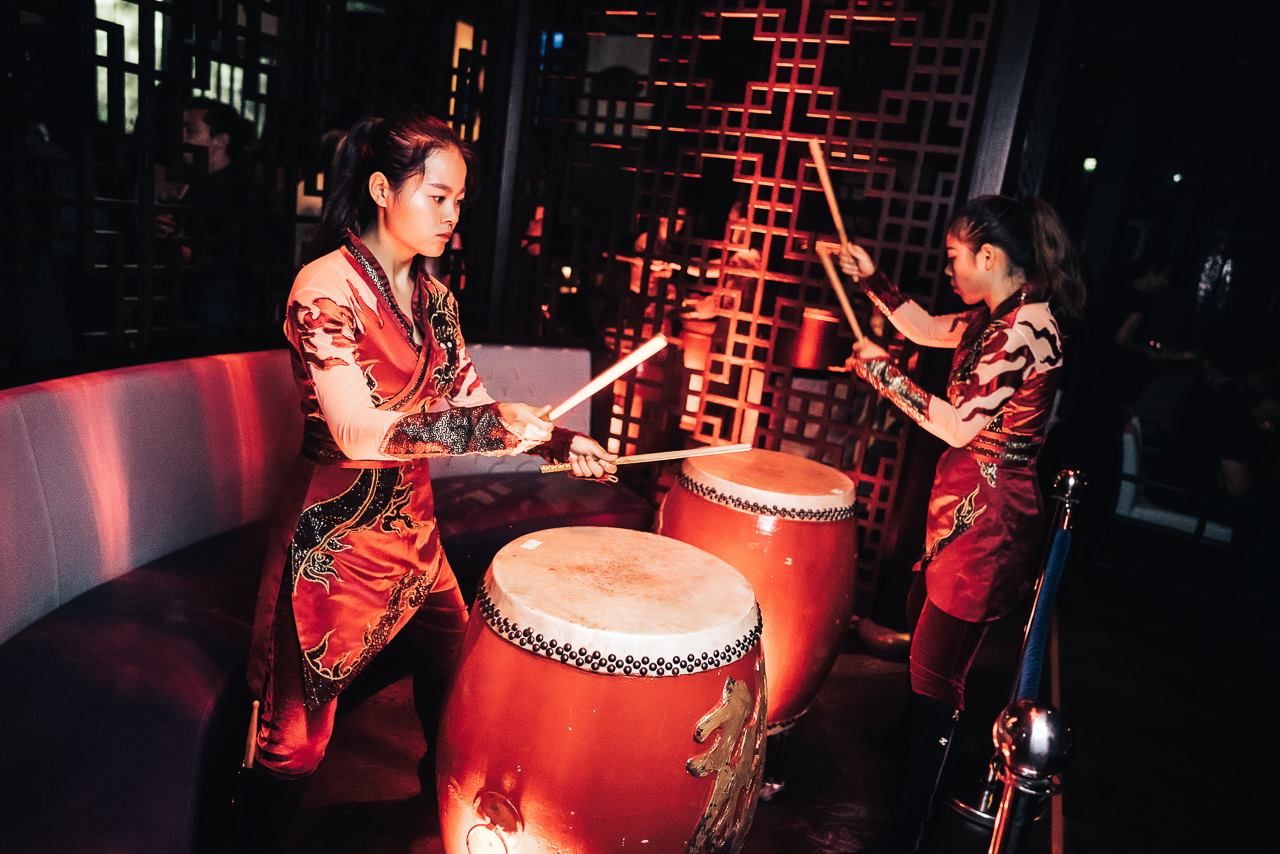 The highlight of Chinese New Year in Dubai is the fireworks extravaganza on Chinese New Year’s Eve, a spectacle of red and gold fireworks raining down over Dubai Creek. Boardwalk is the best place to take in the show, one of several free ways to enjoy the holiday. There are also puppet shows, parades, mahjong games, workshops, and more at Dubai Festival City until February 1, and a lantern festival will be held on the 8th. Or maybe seeing the Burj Khalifa dressed up in lights is enough to blow you away. If you’re in the mood to splurge, rack up a celebratory bill at the Chinese New Year-themed dinner event at Hakkasan, a splashy restaurant in Atlantis, The Palm specializing in Cantonese cuisine.

A version of this article was previously published on February 4, 2019, and was updated on January 24, 2020 with more information.

Food + Drink6 Regional Chinese Dishes That Show Off the Country’s Culinary Diversity
Tagged
Festivals Holidays
What did you think of this story?
Meh
Good
Awesome