Escargots, snails cooked in garlic butter, are one of the most sought after culinary delights in France, famous for their distinctive earthy flavor and silky texture. The best escargot is not just a dish but an experience, which requires a distinctive fork and a platter designed specifically to hold the cooked snails. This is a dish deeply entwined with France’s gastronomic history, but the French were not the first people to cook and eat snails.

The first recorded snail recipes come from the Ancient Greeks, who would remove the operculum, or cover, which normally allows the snail to retreat into its shell and seal the entry. After this, the snails would be placed in a mixture of water and flour and then left to grow. Once they could no longer fit in their shells, the snails would be extracted, then roasted in olive oil and a salty, fermented fish paste. From Greece, the art of snail gastronomy moved to Ancient Rome and the recipes changed. Instead of a salty snack, snails were eaten as sweet treats. Romans started extracting the snails from their shells at the start of their preparation, leaving them in salted milk in a container called a choclearia. Once fattened, the snails were then cooked in a starchy, sweet wine sauce.

A chef named Marie-Antoine Carême is credited with popularizing escargot in France. Stories say that in 1814, Napoleon Bonaparte’s foreign affairs minister Talleyrand was honored with a visit from Russian Tsar Alexander I for dinner. Attempting to impress the Tsar, they went to a famous local restaurant. The chef, upon realizing he didn’t have enough food left, went to the garden and found some snails. He cooked them in garlic, parsley, and butter. Tsar Alexander I greatly enjoyed the meal, and the dish quickly became fashionable across Europe. The dish was originally named Escargots à la Bourgogne, after the Burgundy region of France where chef Carême had his restaurant.

Escargots made from French snails are referred to as Burgundy snails. However, a slow reproductive cycle and over-consumption have limited the farming of this species in France. Instead, a lot of restaurants have to import their escargots from countries with a more suitable climate or settle for the Gros-Gris (Large Grey) snail. The Gros-Gris reaches maturity in as little as four months, which is far more manageable than the four years it takes the Burgundy snail to mature. The species isn’t very important though, as the preparation of the escargots is what defines the dish.

Whether you’re a snail connoisseur or are just now building up the courage to empty your first shell, here are the most interesting restaurants around France where you’ll find the best escargots in the country.

The Benoit bistro has been a staple of traditional French gastronomy since it was established in in 1912. It is situated perfectly, in the heart of central Paris, near the grand Hôtel de Ville (Town Hall) and the historic Saint Jacques tower which allows tourists to gaze at the dazzling city. Once you’ve taken in the sights, feast your eyes on the exquisite décor of Benoit. The tiled floors, wood-panel walls, and painted ceiling echo a century of Parisian history. While seated on a red leather bench, sliced baguette in a basket on the crisp, white tablecloth, you start to get a feeling for the spirit of French gastronomy.

The escargots at Benoit epitomize the trusted and traditional method of refining the flavor of the dish in rich Bourgogne butter. This bistro offers six, nine, or twelve escargots, each option presented on an indented serving platter. Don’t worry about spilling the tasty garlic butter out of the huge shells, a warm slice of baguette at the end always helps to soak up the remaining sauce. Finish off your meal with a round of Benoit’s famous chocolate-covered profiteroles for an extra treat. 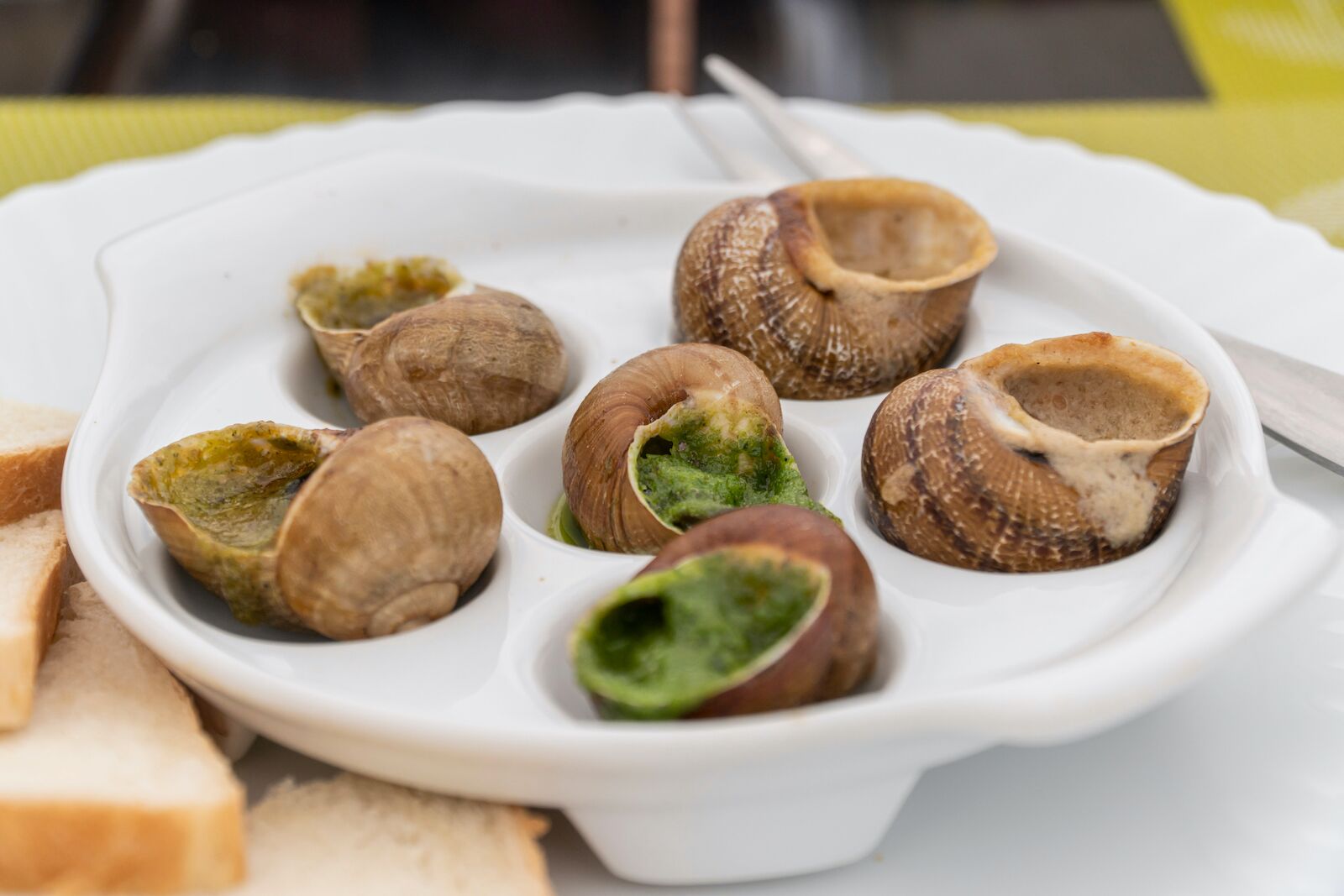 Further North in Paris, along the Grand Boulevard, you might see a queue of people waiting by some red velvet rope to be taken into a mysterious courtyard. Unlike the grander, more ornate, historic restaurants you will have seen around the city, Restaurant Bouillon Chartier prides itself on its simplicity. Established in 1896, the Bouillon, or ‘Broth Kitchen’, started as a place where Parisians could come to have an affordable meal at the end of a long day at work.

The restaurant consists mainly of one large room, covered with large wood-panel mirrors, completely filled with traditional French brasserie tables. As you enter, look to the right, and you can see the old, thin drawers in which regular customers once stored their personal cutlery decades ago. Don’t be surprised if you’re being seated as a pair and end up joining a table with another couple. It is a usual occurrence there and often conversations get lost in the sound of a hundred diners enjoying their meals.

Bouillon Chartier offers classic French dishes from as little as €1 for a vegetable soup. The escargots there are also very reasonable at only €14.80 for a dozen. Arriving in a special indented serving dish with an escargot fork, the large shells are overflowing with mouth-watering garlic and herb butter. Remember not to be upset when you find you have an inattentive waiter. Chartier has captured the hearts of Parisians and tourists alike as a restaurant where you can find an inexpensive French meal.

Lyon, a stunning city in the middle of France, is known as much for its food as it is for its incredible historic landmarks. The Old Lyon district itself is a UNESCO World Heritage site and sees a rise in tourists each December, not just for the old world charm of Lyon’s Christmas Markets, but for the extraordinary visual displays during the city’s famous Festival of Lights.

Near the Rhône river, overlooked by the imposing Notre-Dame de Fourvière Basilica, lies the Bouchon Des Cordeliers. A simple restaurant, with dark, wooden chairs and red-and-white checked napkins lying atop white tablecloths, the dining room is painted entirely in red. But one does not go to the Bouchon for the scenery, instead, the restaurant is full of both locals and tourists in search of a good Lyonnaise meal.

Unlike the other restaurants on this list, the Bouchon does not serve escargots in their shells. The dish they offer is indeed a traditional Lyonnaise delicacy: escargots and pied de cochon. This restaurant strips the meat and marrow from a pig’s foot, cooks it with the de-shelled escargots, and serves it in a tidy parcel wrapped with large strips of bacon. This method allows the rich, salty flavor of the pig’s foot to blend with the firm texture of the escargots. The meat is accompanied with grain mustard and a small salad. If you’re still hungry after, try an entrée of slow-cooked beef cheek or one of Lyon’s famous quennelles, a fishy mousse-like dumpling served with rice. 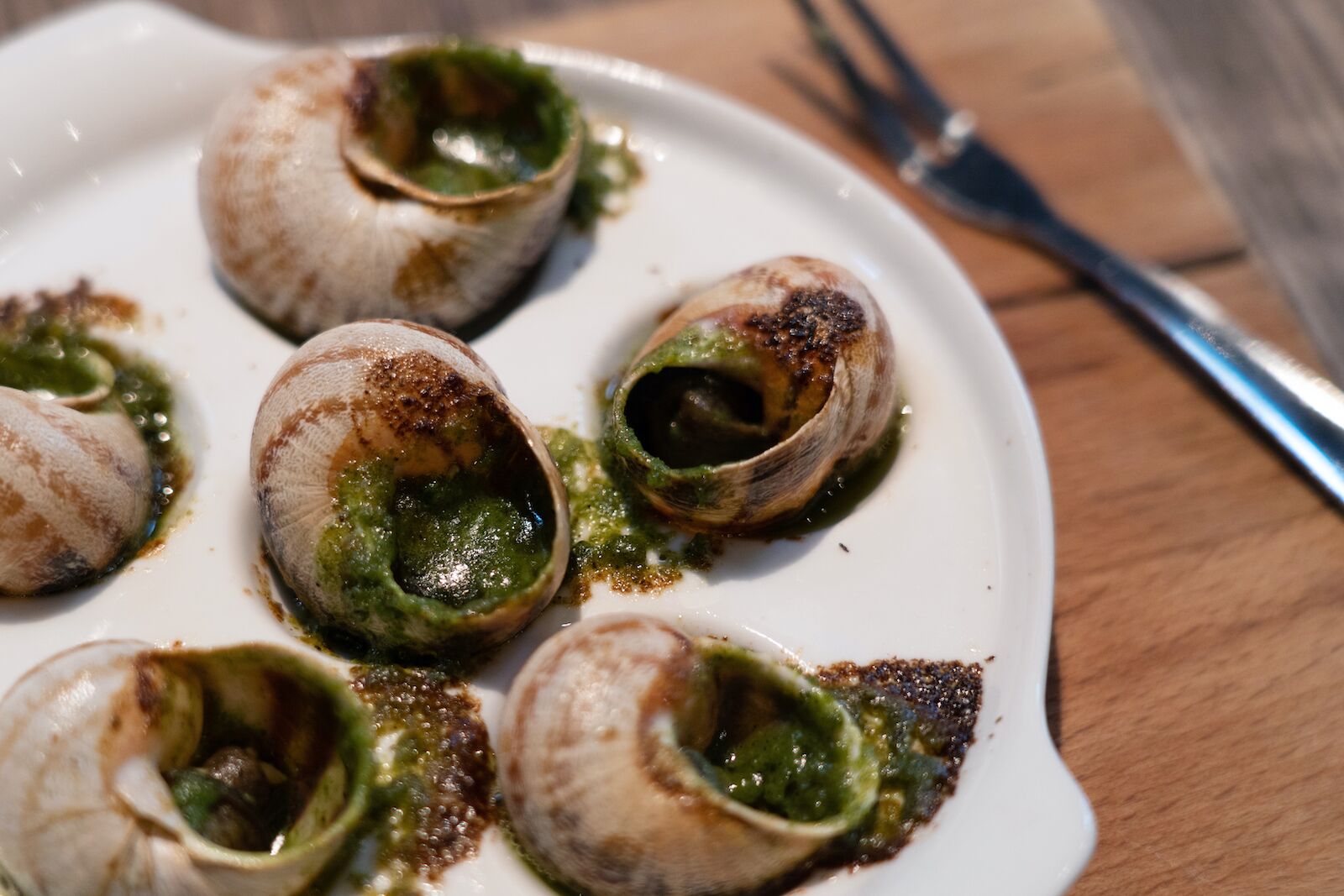 Positioned in the west of France between the rolling waves of the Atlantic Ocean and award-winning vineyards stretching out as far as the eye can see, Bordeaux has a quaint rustic feel, even as a thriving gastronomic capital, with weathered yellow buildings along cobblestone roads and riverside walkways. Running through the center lies Rue Saint-Catherine, Europe’s longest pedestrian shopping street.

Found right in the heart of the old town, in the sunny Parliament Square, Édouard is a recent addition to the many sublime restaurants of Bordeaux. Opening its doors for the first time in 2017, Édouard has garnered fame for its extensive wine collection. On clear days, meals are held on the sun-soaked terrace, with neat tables lined up on the warm stone floor. Colder days will find diners filling the stylish, modern rooms, each one accessed through Bordeaux Limestone archways and lined with exquisite wine vintages.

The escargots at the Édouard are served in a shallow brass dish with an accompanying escargot fork. Forsaking the traditional Bourgogne butter, these escargots are brimming with a beurre maître d’hôtel. Named after the waiters who used to produce it at eager diners’ tables, this sauce is made from softened butter mixed with finely cut parsley and freshly squeezed lemon juice, seasoned with salt and pepper. While dining at Édouard, take advantage of the bounties of Bordeaux and pair your escargot with a local bottle of Sauvignon Blanc. 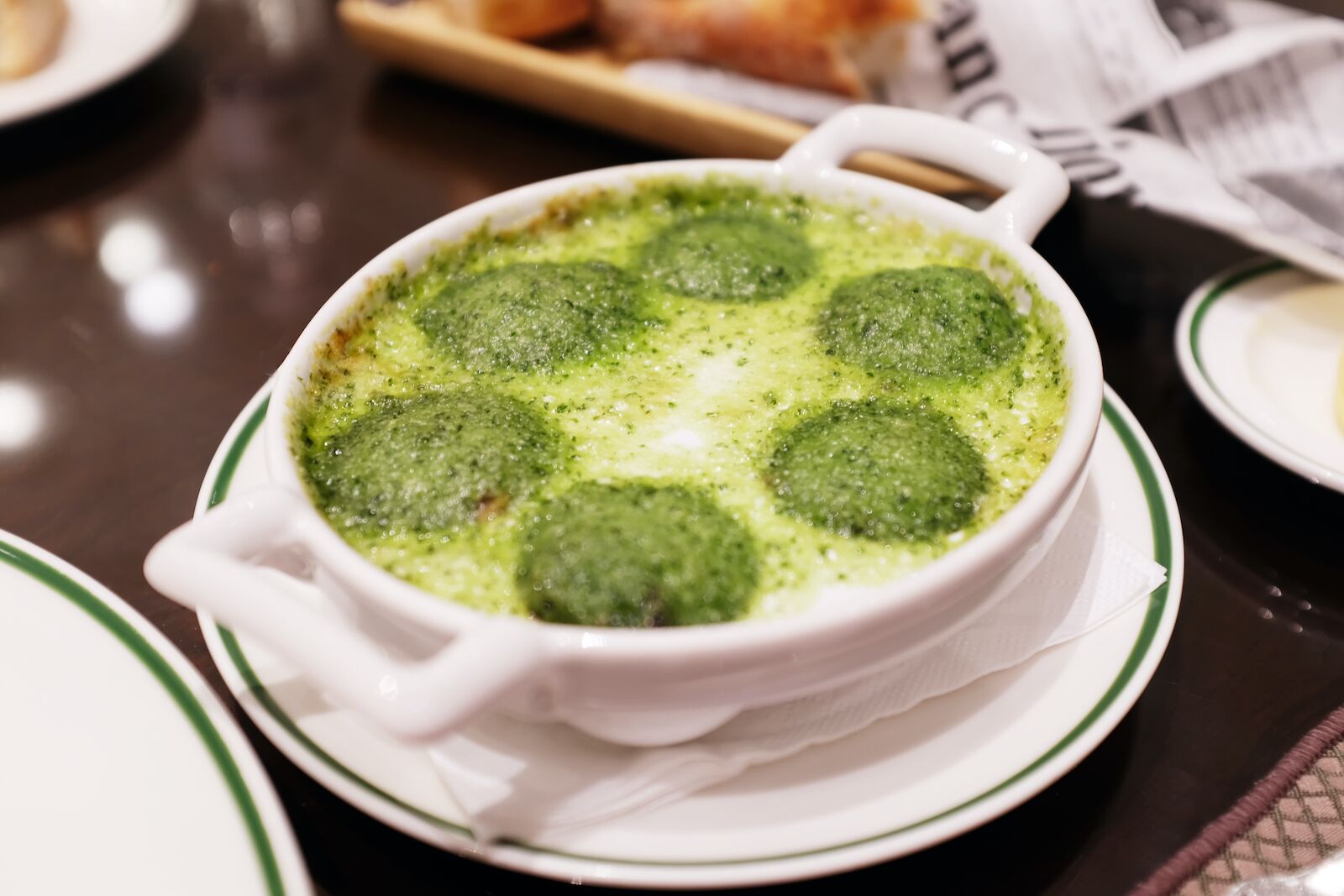 Set back a few streets from the seafront, but still well within the old town, lies this culinary treasure. With only a few outdoor tables on the thin Cannes pavements, Bistro Les Canailles welcomes most guests into its charming interior restaurant. Modern furniture set against wood and light, textured stone walls gives Les Canailles a rustic, beachside feeling.

The escargots at Les Canailles are served in a different manner than most other French restaurants. Here, the snails are removed from their original shells and placed in a crunchy edible shell. Molded into the shape of the true escargot shell, the croustillants d’escargots revel in the familiar flavor of Bourgogne butter-soaked meat covered with a satisfying crispy envelope. While you’re in the South, finish off your meal with the region’s famous Île Flottante, a delicate whisked-egg dessert floating in a bowl of caramel and custard.

BooksExperience the Romance of Paris Through These Five Iconic Dishes
Tagged
Food + Drink Restaurants + Bars
What did you think of this story?
Meh
Good
Awesome