There’s a common perception that a city’s historic center is the most authentic and aesthetically pleasing neighborhood, and therefore the best place for taking in a new culture. You’re not wrong. Old Towns are a history buff’s dream and an Instagram model’s paradise. Problem is, this illusion can be fleeting. Old Towns often fall victim to a commercialization that is far from quaint — kitschy souvenir stores line the sidewalks, hollering hat salesmen wait around every corner, competing chocolate stores hawk their “authentic” sweets, and crowds dilute the beauty of the historic aesthetic.

Staying in a city’s New Town can actually be a more relaxing, rewarding experience. Though often overlooked, New Towns can be just as pretty and culturally significant, and speak more accurately to the city’s contemporary character. The desirability of Old Towns means food and lodging are typically astronomical in price — New Towns are more affordable, with a greater diversity of food options and nightlife. Whether it’s the colorful faux baroque architecture of Kiev’s Vozdvyzhenka neighborhood or the trendy cocktail bars of Edinburgh’s famous New Town, these European neighborhoods might not be living museums, but they’re certainly worth a visit. 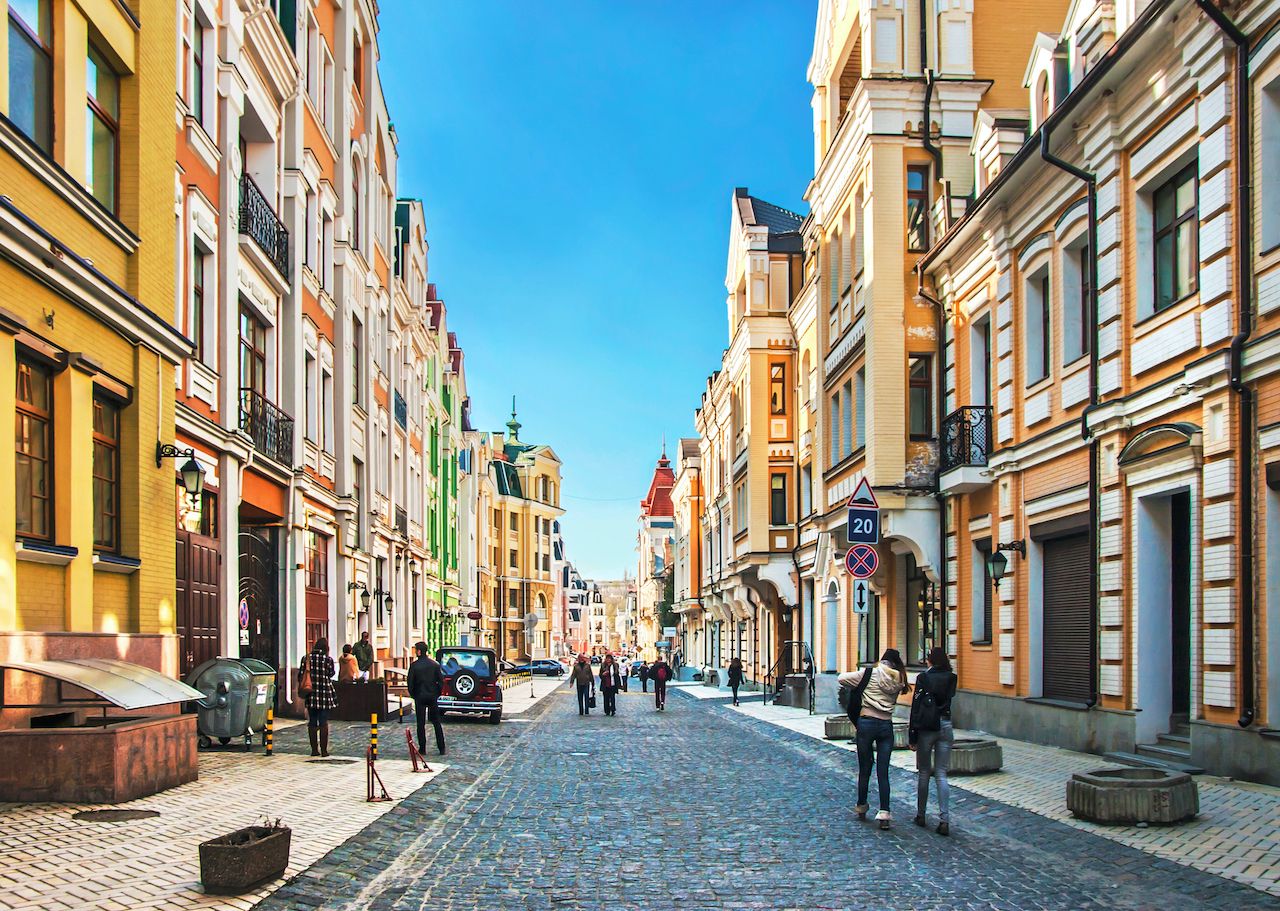 Kiev’s Vozdvyzhenka neighborhood wasn’t always a place worth visiting. Once an old craftsmen’s neighborhood, the area was rebuilt in 2000 with colorful faux-baroque townhouses. Many remained unsold and vacant for over a decade, but now Ukrranians are slowly giving new life to the area. Houses in Vozdvyzhenka are true works of art, designed quite deliberately and with great detail to fit the aesthetic of 19th-century architecture. The rows of houses are meant to resemble a bright rainbow, and while this effect is certainly accomplished, many do still remain abandoned due to their high prices.

While actually living there is an expensive proposition, the neighborhood has become popular among visitors. Its rainbow houses probably offer the best Instagram backdrop in Kiev, and its galleries and museums will give you a deeper-than-visual appreciation for the area’s culture and history.

There’s no doubt that the character of Vozdvyzhenka is more bizarre than most European neighborhoods, but its eccentric and colorful restoration make it all the more intriguing for travelers. 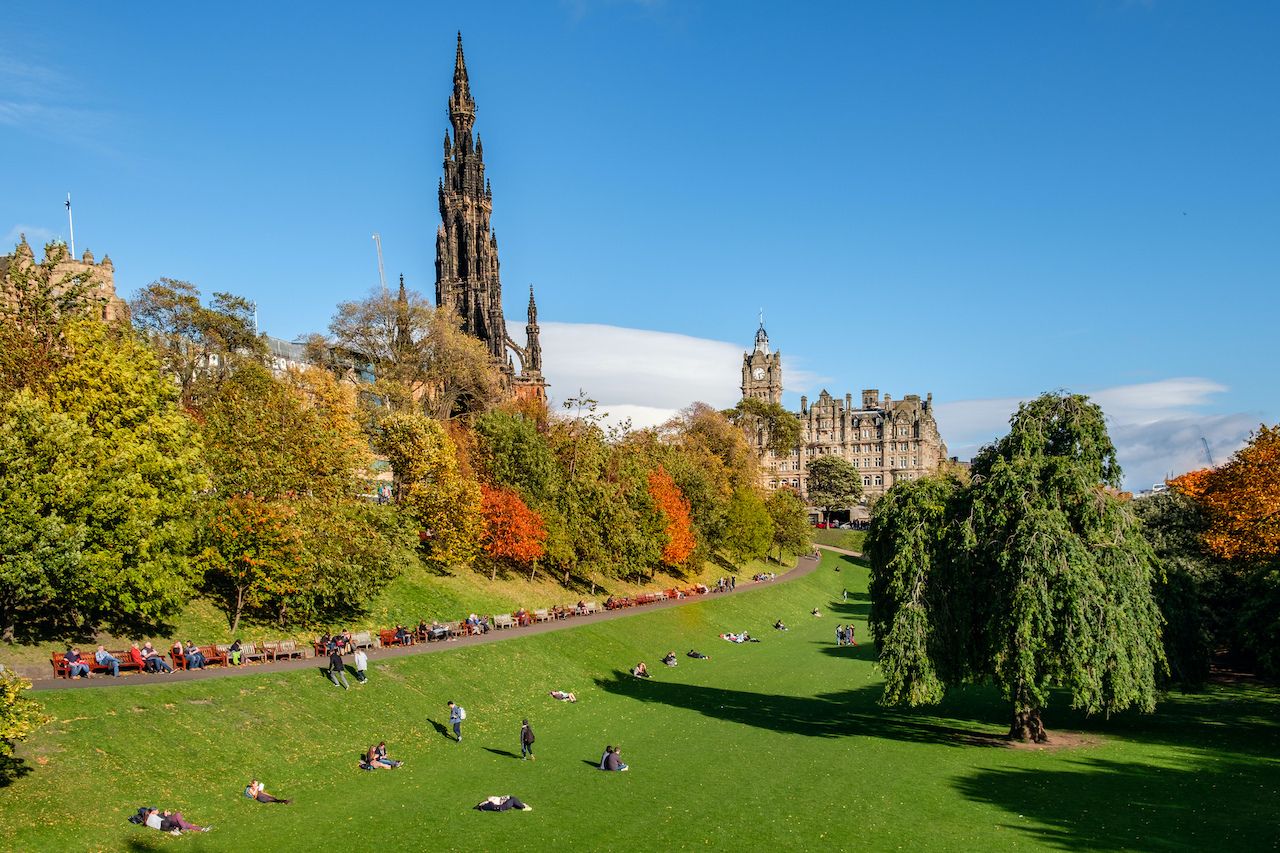 Edinburgh’s New Town might not look particularly new, but next to the city’s Old Town, it’s downright futuristic. Just a five minute walk from Old Town across Waverley Bridge, Edinburgh’s New Town was built between the 1760s and 1830s and is considered a masterpiece of British city planning. While the Old Town might be home to Edinburgh Castle, the cobbled Grassmarket, and picturesque alleyways, its New Town is a center of commerce, nightlife, and history. With an abundance of neoclassical and Georgian architecture, it doesn’t even sacrifice its historic aesthetic.

Old Town is certainly a vital part of any Edinburgh trip, but you could spend your entire Edinburgh visit in New Town and feel like you got a well-rounded experience. Get your dose of history by visiting the Sir Walter Scott Monument in Princes Street Gardens — a towering cathedral-like monolith dedicated to the city’s most famous author. Just down the road you’ll find Calton Hill, a UNESCO World Heritage Site that once served as the location for a prehistoric hillfort. From here, you have the best view in Edinburgh over Old Town, Edinburgh Castle, and Arthur’s Seat plateau in the distance. A short walk from here will bring you to the Royal Botanic Garden, which will make you feel like you just left the city and wandered into a flowering countryside estate.

New Town also has the best shopping, bars, and nightclubs in the city. Old Town certainly has no shortage of historic pubs, so if you want to spend a quiet night sipping whiskey and listening to Scottish music in a dim cellar-like bar, this area of the city has you covered. But if you’re looking for upscale restaurants, trendy cocktail bars, and a thriving nightlife scene, New Town is the place to be. 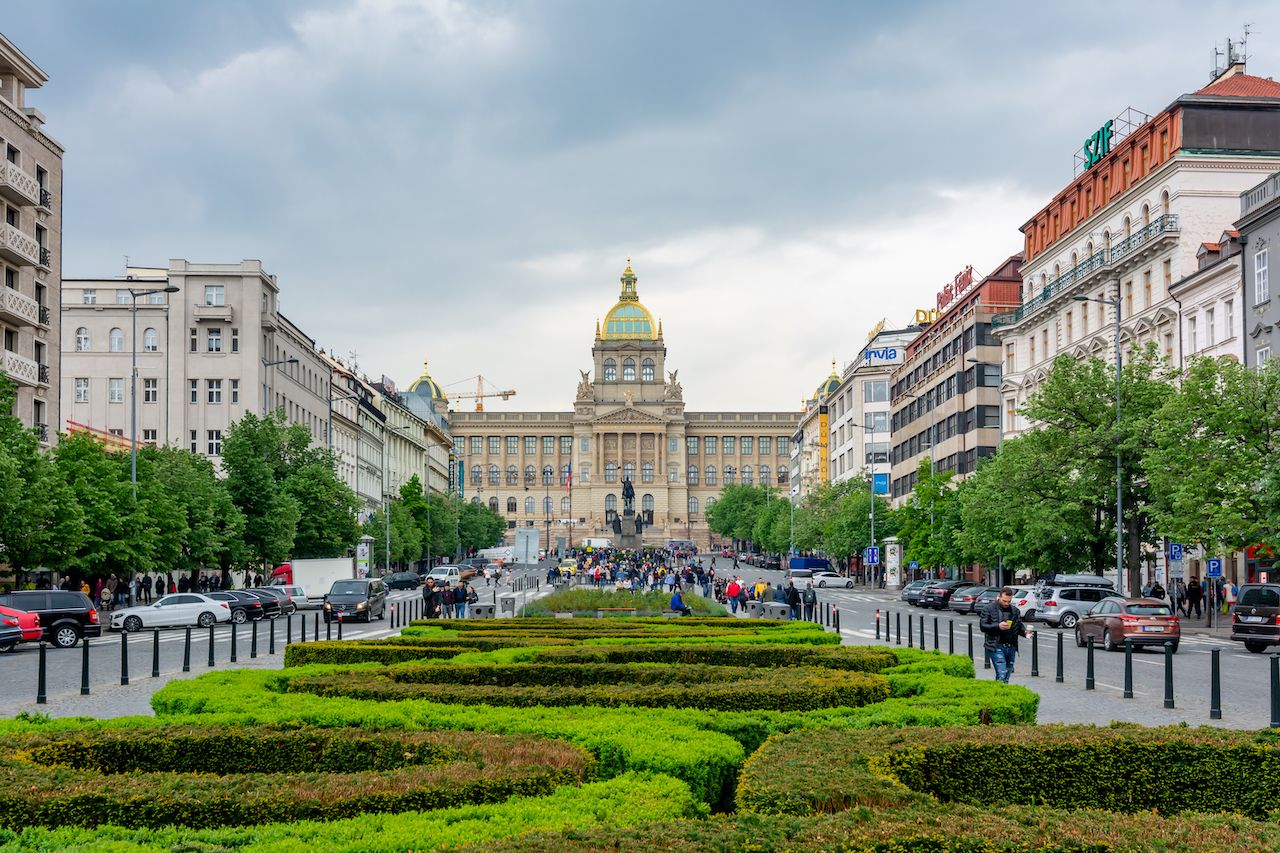 Much like Edinburgh, Prague’s New Town isn’t as new as you might think. The Nové Město neighborhood was designed in 1348 by Charles IV to surround the medieval Staré Město neighborhood. In contrast to Staré Město, which is known for its Old Town Square, famous Astronomical Clock, and large crowds of tourists, Nové Město is more commercial in character. It does, however, have a unique architectural style, with a blend of Art Nouveau and contemporary buildings. Wenceslas Square, its most prominent plaza, was also the site of one of Czech Republic’s most historic events, the peaceful 1989 Velvet Revolution which ended Communist rule.

You might be a few blocks away from Prague’s medieval center, but there are still several historic and cultural sites located in Nové Město. Take note of the Mucha Museum, Museum of Communism, and National Museum, while those who like theater should set aside time to visit the State Opera and National Theatre.

For a bit of peace and quiet, there’s also Slovansky Island right on the Vltava river. The island is home to the neo Renaissance-style Zofin Palace, a large gazebo, and a park area for relaxation. There’s also the tranquil Franciscan Garden located in a courtyard between Jungmannovo and Wenceslas Square, a perfect escape from the city dating back to the 14th century. 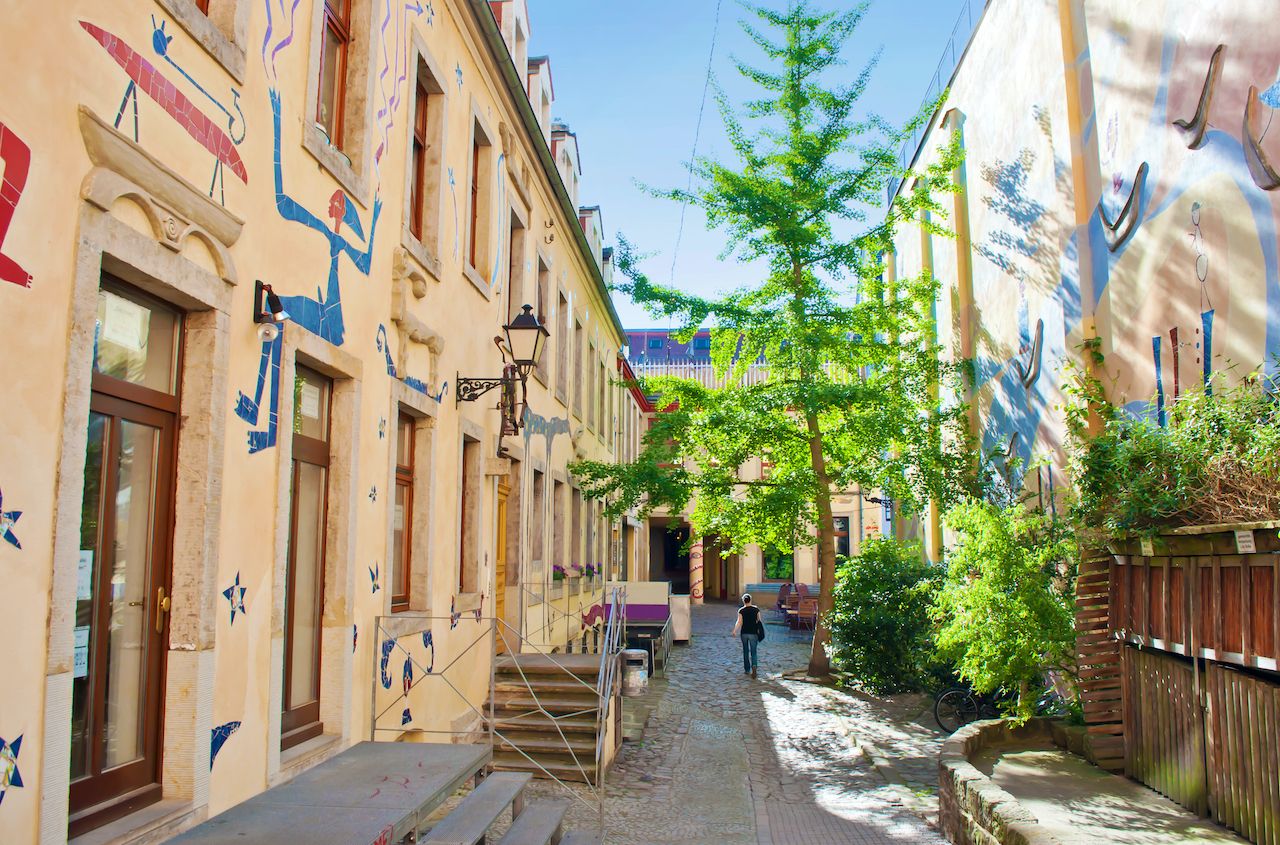 Dresden’s Neustadt stands in sharp contrast to the adjacent Old Town. A home to students and artists, the Neustadt represents the real heart of the city, while its residents often refer to Old Town as “Disneyland”.

Neustadt is composed of the Inner and Outer areas. The Inner town is known for its historic Palais Square, with its natural history museum and museum dedicated to Turkish artworks, and its relaxing promenade along the river. The area’s pedestrian avenues are full of one-of-a-kind boutiques and bordered by picturesque meadows. The Inner New Town is also home to some of Dresden’s best restaurants and breweries, like the decadent Palais Bistro and the Watzke microbrewery.

The Outer New Town juxtaposes Communist-era architecture with a vibrant nightlife scene. If you’re looking to party in Dresden, go to the Outer Neustadt, where you’ll find no shortage of bars, clubs, late-night eateries, and crowds trying to have a good time. And of course, there’s always The Colorful Republic of Dresden — the annual three-day cultural festival held in New Town to celebrate the attempt to establish a utopian society in the early 1990s. The social experiment itself failed, but each June the party rages on. 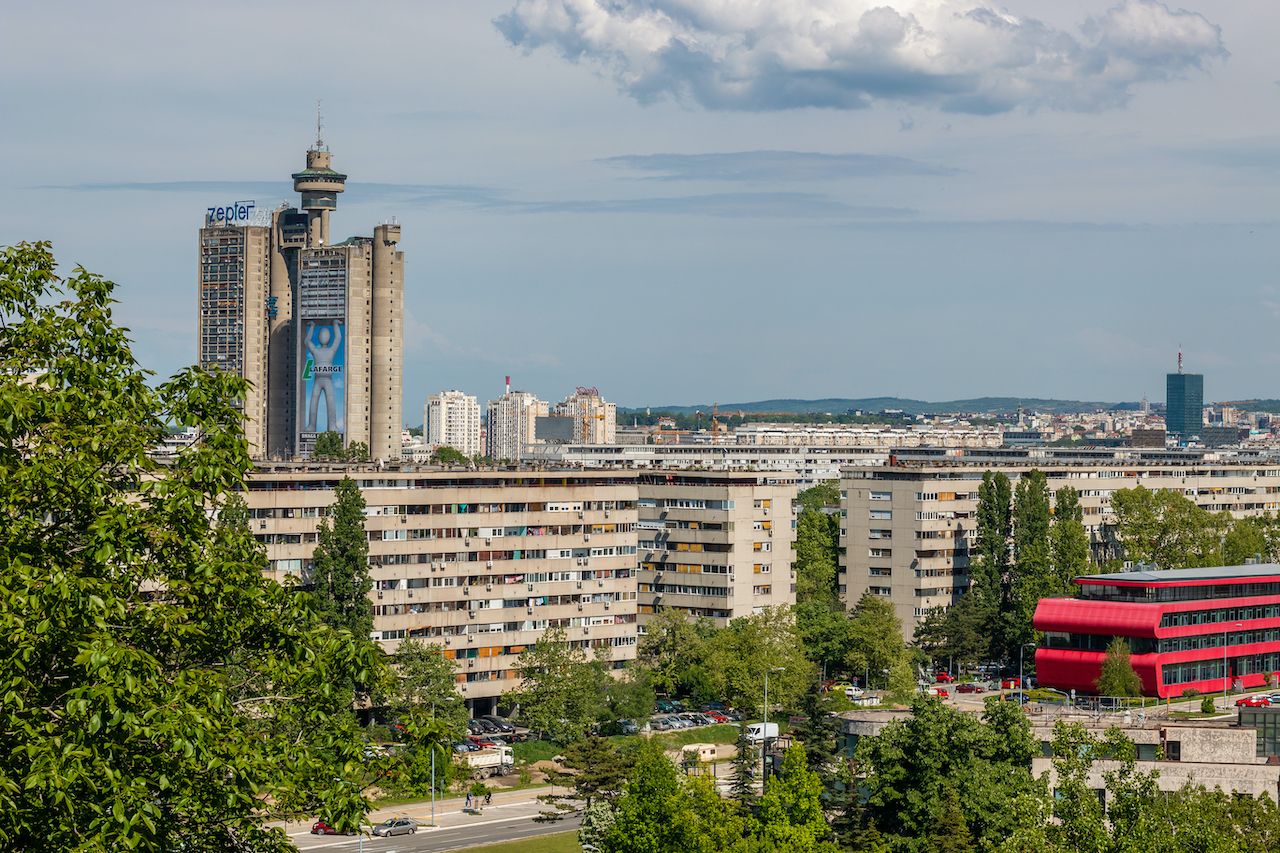 Just because walking through New Belgrade feels like walking through a dystopia doesn’t mean you should skip it. Underneath the gray asphalt and Soviet-era architecture are some truly unique sights that set this post-World War II neighborhood apart from many others in Europe.

The Western City Gate is located in New Belgrade and is perhaps one of the city’s most recognizable monuments. A mix of futurism and brutalism, the tower was designed to welcome visitors to Belgrade who arrived from the West. The gate looks more like a piece of alien architecture than anything else, but it’s certainly one of the most surreal monuments in Europe. New Belgrade is also home to the Museum of Contemporary Art if the City Gate inspired you to delve further into the Serbian art scene.

Although Belgrade doesn’t suffer from overtourism like other major European cities, commercialization in the Old Town (Stari Grad) has deprived the area — particularly its restaurant scene — of some of its local character. New Belgrade might not be as aesthetically pleasing as Stari Grad, but it should be the first stop on your quest for Serbian cuisine. Cosi is known for its sandwiches and flatbreads, and Durmitor has earned a local reputation for having the best veal and lamb in the city.

Beaches and IslandsThe Most Underrated Coastal Towns in Europe To Go To Before They Become Touristy
Tagged
Art + Architecture Trip Planning
What did you think of this story?
Meh
Good
Awesome