Often said to be the birthplace of democracy, Athens has earned a reputation as a must-see destination for the globally minded. Justifiably so, as visitors have the opportunity to both bathe in the crystal-clear waters of the Mediterranean Sea and catch a glimpse of the Parthenon perched upon the Acropolis. However, this vibrant city has another side that remains undiscovered by many visitors: It’s one hell of a party town.

Nightlife makes up a sizable chunk of Greek culture, and as nights out are popular among locals of all ages, they make for a unique experience for foreigners if navigated with some expertise. This is a city where you never know where the night might take you, whether you’ll end up in the central neighborhood of Gazi or on the Athens Riviera, or at what time you’ll retire to bed. Regardless, local nightlife culture has a lot to offer each visitor, so before heading out, make sure you’ve prepared yourself for a night you won’t forget.

Set a base for the booze by indulging in local cuisine. 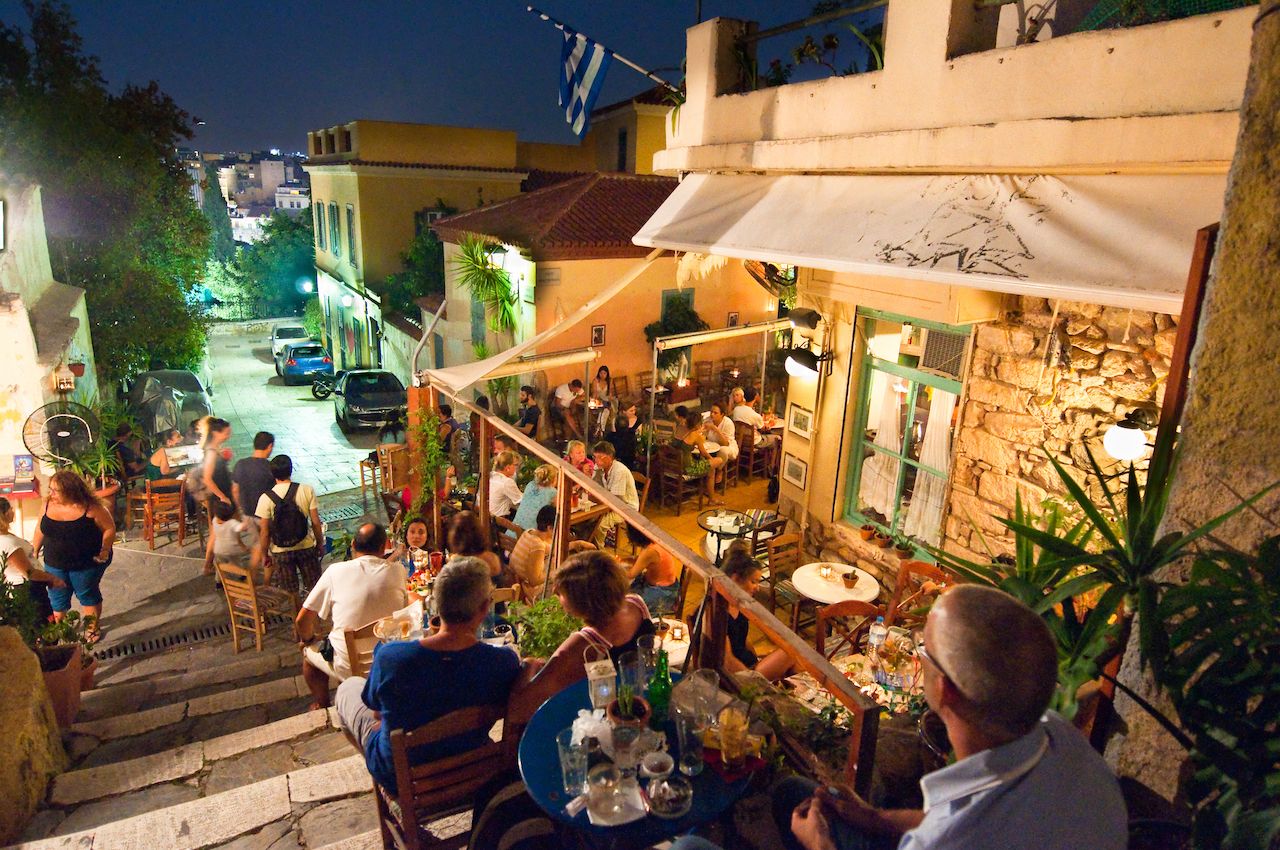 Food is an absolute essential to start out any night. Souvlaki and gyros, the street foods considered the Greek equivalent of American burgers, are always the way to go if you’re looking to grab a bite. In the pedestrian streets of Monastiraki, it’s easy to say that coming across a souvlatzidiko (souvlaki shop) is as effortless as finding a souvenir shop, with many notable eateries such as Efcharis open until midnight. Wraps are available to-go, so you can devour your meal as you head to your next destination by foot through the heart of the historic district, known as Plaka.

Alternatively, there are local-centric shops in the suburbs that bustle with people until the middle of the night, where competition is fierce to win over a customer base that is already well-acquainted with Greek cuisine. When it comes to dining in the true Greek manner, staying outside of the city center offers the advantage of joints catering to Athenians rather than the tourist set. The town of Holargos, a mere 15 minutes away on the metro, is packed with high-quality restaurants that locals swear by, such as Melitini and Cook&Grill, which sell both street food and traditional home-style meals.

Visit an outdoor cinema for a true Athenian experience. 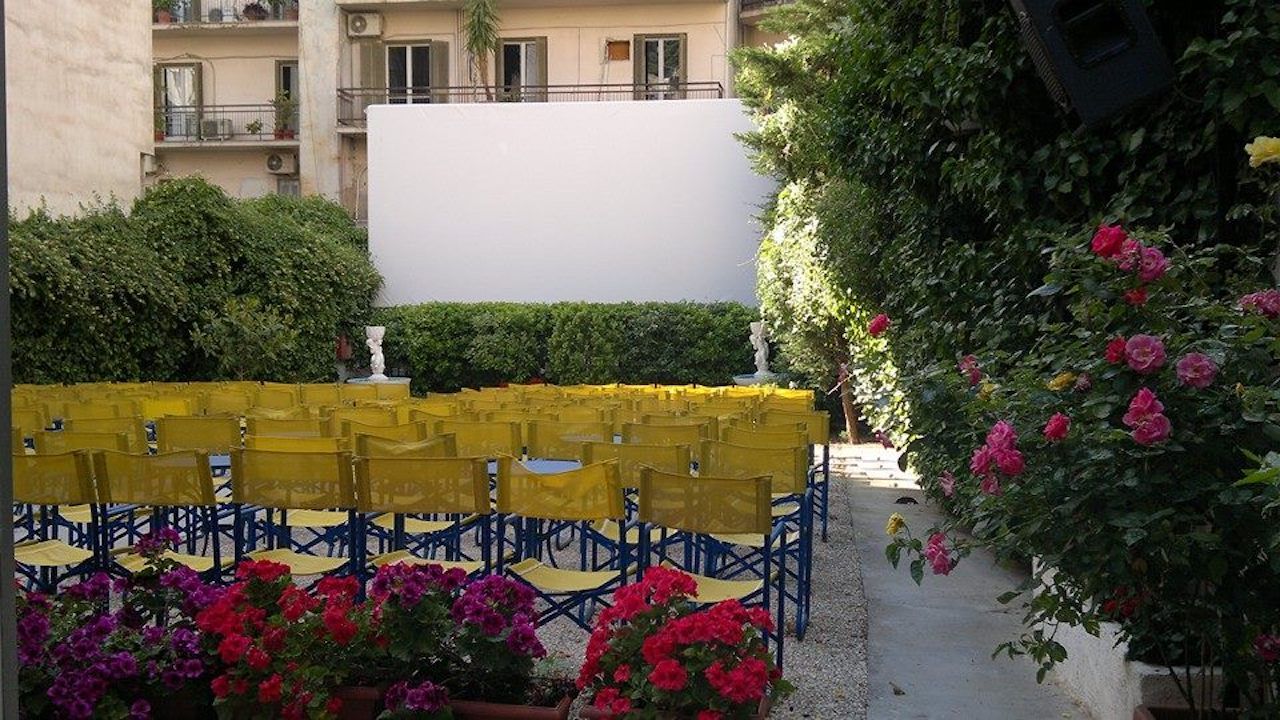 Another Greek tradition, from May until September or October, is the open-air cinema, which are so popular in Athens that nearly every neighborhood has its own. Make a quick flick the second stop of your night out. Thision, Cine Paris, and Cine Panathinaia are great for catching the latest Hollywood movies, or even popular oldies, while having a snack. These well-established movie theaters attract locals and foreigners alike in the early hours of the night.

Level up your pregame action at a cocktail bar. 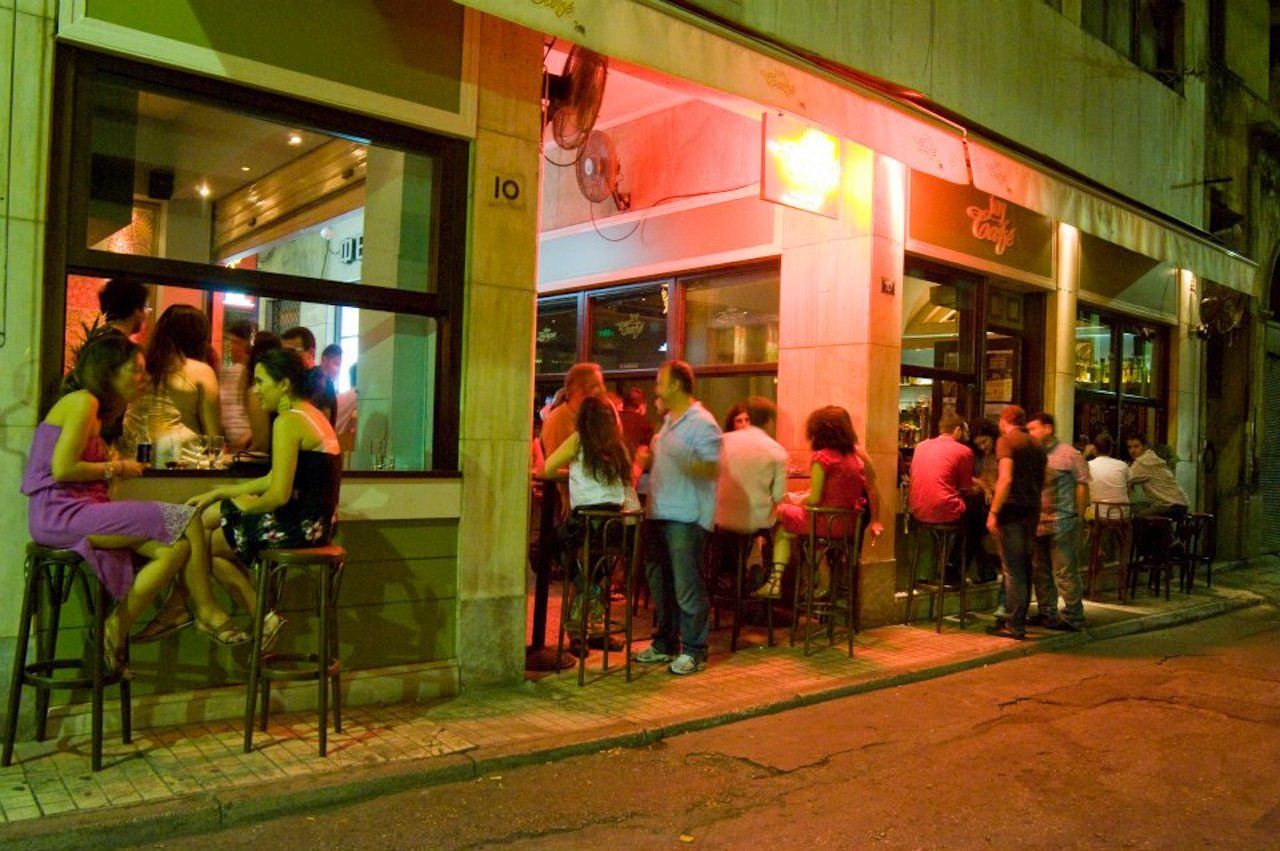 Drinking culture in Greece is prominent and follows the conventions of Mediterranean drinking culture. As a result, there are many local specialties that people love to enjoy in social settings. Liquors like tsipouro, tsikoudia, ouzo, and raki are often served as shots but are also used to make cocktails, while Mythos, Alfa, and Fix are the mainstream local beers you can try out. Non-alcoholic mastiha (mastic) water is a refreshing alternative that can be found easily and is best enjoyed with a dessert.

In addition, since Greeks treasure their juices and coffee, feel free to ask for a byssinada (sour cherry juice that can also be carbonated) or an iced frappé instead if you have a coffee addiction to fuel. Most importantly, though, don’t forget to join in on a toast, or even initiate a spontaneous one by raising your glass in the air and calling out στην υγειά μας! (pronounced “stin eeyamas,” which can be translated as “to our health!”).

There are numerous cocktail bars throughout the city that are worthy of being your stop for tipsy-turving fun as the night matures. Many are found in charming gardens with bright fuchsia vukamvilies (Bougainvillea vines) climbing up the walls, on the rooftops of graffitied apartment buildings, or even in formerly abandoned courtyards. Near the Acropolis, Dionysos Zonar’s is an ultra-modern restaurant bar with a spectacular view of the Parthenon and the Odeon of Herodes Atticus. The spot serves one-of-a-kind cocktails, or you can opt for a glass of Greek wine.

On the other side of the Acropolis is Monastiraki Square, where you’ll find a rooftop bar called 360 with — as the name suggests — full-circled views of the downtown area, and A For Athens Cocktail Bar, which offers more of the same. Also worth checking out is TAF / The Art Foundation, an old-fashioned outdoor bar (covered in the winter, though) hosting DJs with a love of jazz. The venue also hosts a gallery, shop, and rooms that can be rented by artists looking for a space to explore their creativity.

Further from the Acropolis, Hoxton is a cozy bar located in the lively downtown neighborhood of Gazi. It attracts mainly locals, as foreigners don’t know about the area as much as they know about other districts, such as Monastiraki. Ciel, adjacent to the Metropolitan Cathedral, offers amazing views of the historic district. Located away from the noise of downtown Athens in the Alsos Papagou park, Piu Verde is a short walk away from the Ethniki Amyna metro station, which is a mere 10-minute ride from Syntagma.

Hit a bouzoukia club to see how Athens parties unlike anywhere in Europe. 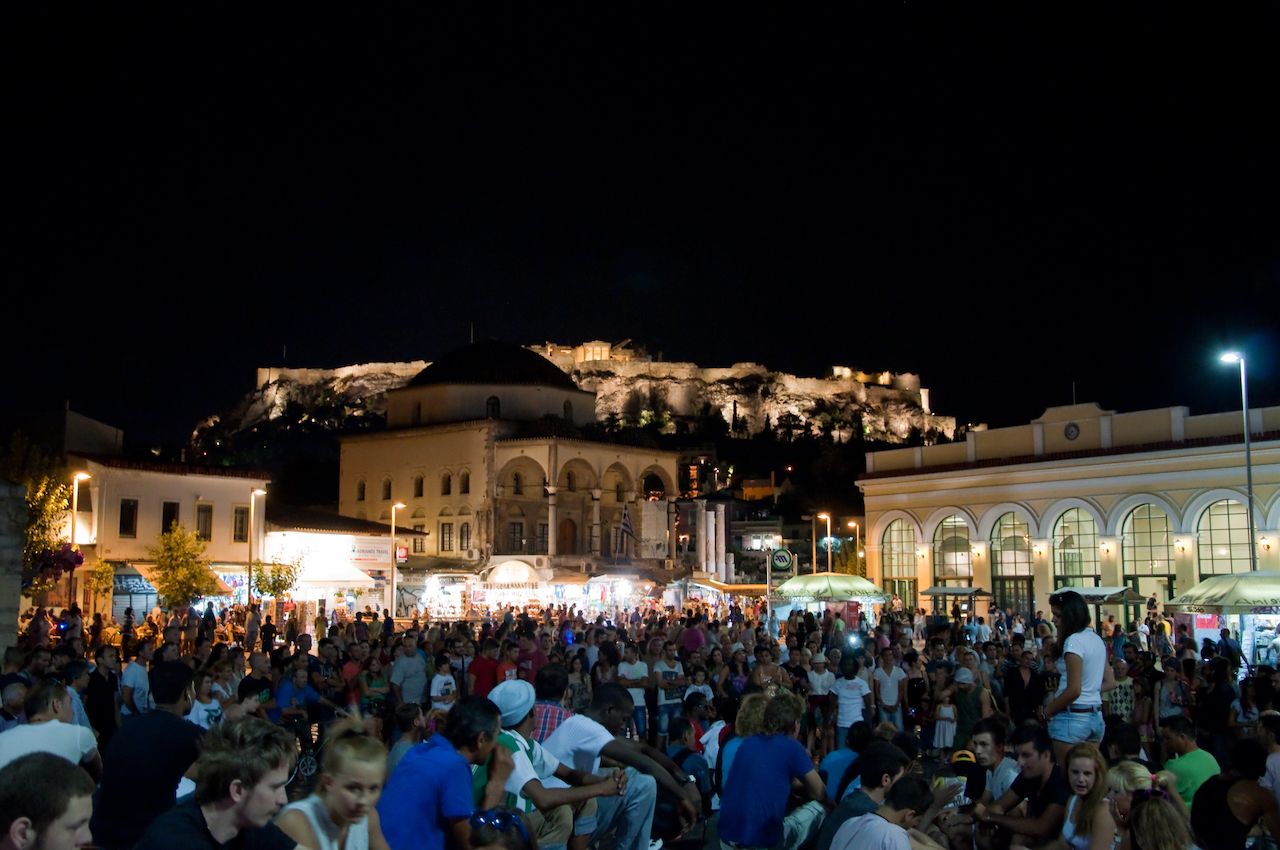 If you love to dance or stand on tables — maybe even both at the same time — the bouzoukia are where you belong. A type of nightclub, bouzouki (a musical instrument used to play Greek music) clubs are home to Greek folk and dance music with live performances all weekend, as well as on certain weekdays. A popular tradition at the bouzoukia is throwing flowers onto the stage where the singer is performing — as opposed to the tradition of breaking plates, a practice that’s becoming increasingly obsolete.

Some renowned clubs worth a visit are:

As a forewarning, if something exciting is going on, and also if something surprising and unexpected happens, you’re likely to hear the people around you shout opa! Feel free to join in on customs like these and immerse yourself in the local culture throughout the night — Greeks love it when visitors try to follow customs and traditions, so be assured that even if you’re slightly off-key or behind the mark, you’ll only receive advice and words of encouragement.

Watch the sunrise along the Athens Riviera. 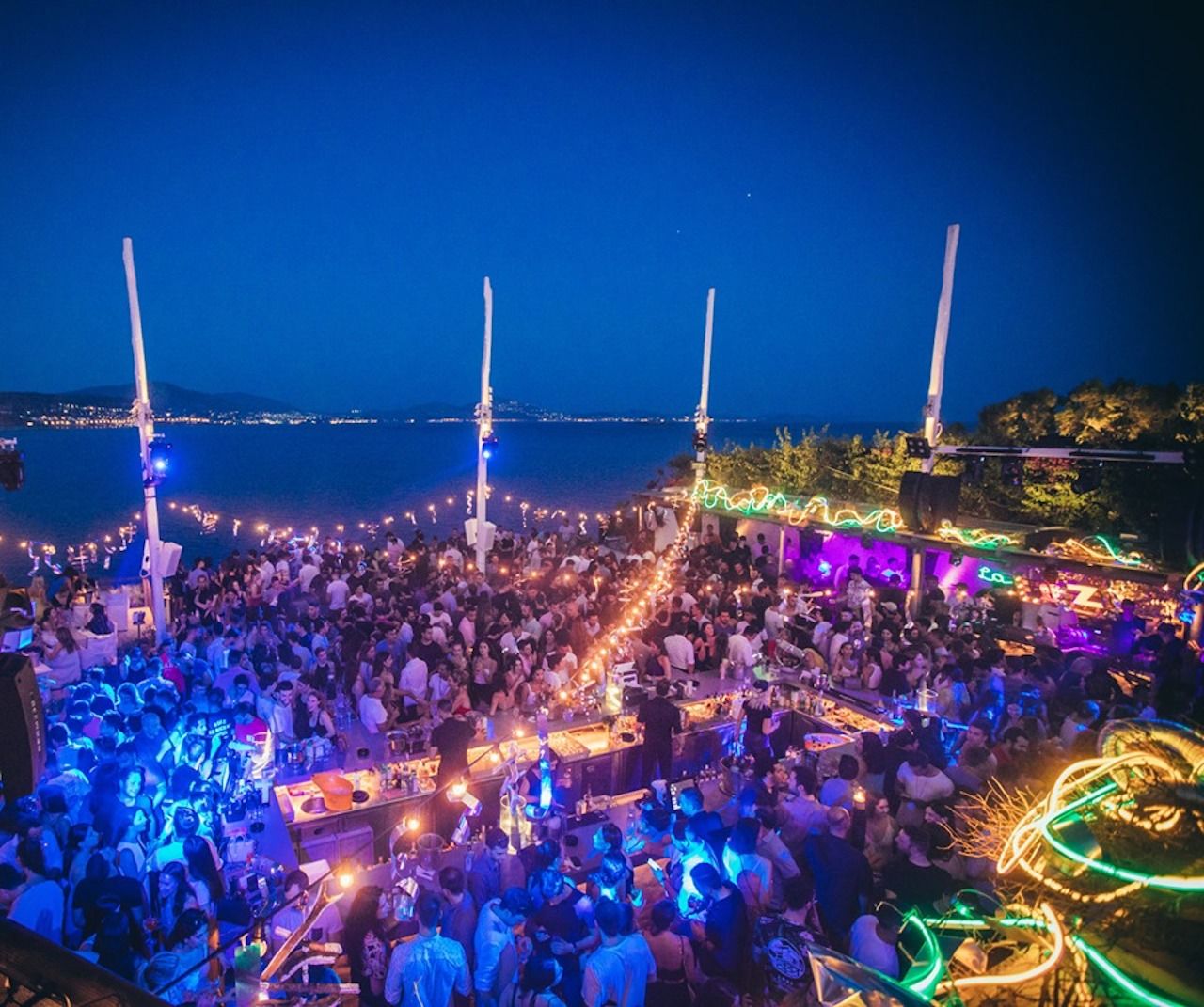 The last destination that should definitely be on your list is coastal Athens, otherwise known as the Athens Riviera. While some bouzouki clubs are on the Riviera, the best way to enjoy your time there is by making a beeline to the local beach bars or clubs. That way you can watch the waves come in as the sun comes up and dip your toes into the cool sand and fully relish in the relaxed ambience of this beachside paradise. A combination of sand and pebbles covers the beach, while seats in different shapes are dotted around it, providing the perfect escape to catch a breath away from the crowd on the dancefloor. And what better way to end your night than to watch the sunrise over the seemingly infinite sea with some background music drifting down from the DJ booth?

One of the most iconic spots in the area is Island, a restaurant and club situated on a rock where you’re so close to the water you can actually hear the lapping of the waves. The Peñarrubia Lounge is a busy lounge bar offering a bit of a different experience, as it’s located right in front of the beach with a roomy garden and hammocks scattered across the grass. The 2019 opening of Lohan Seaside has added quite a few events to the itineraries of Athenians from all over the city as well, with its huge parties and the picturesque scenery surrounding it.

The 11 Sexiest Live Shows Las Vegas Has To Offer
Every Roller Coaster at Cedar Point, Ranked
You Can Now Take European Walking Tours at the Scenes of Your Favorite Netflix Shows
5 Must-Visit Music Venues Off Nashville’s Main Drag
The 8 Best Movies and Shows To Watch Before Going To Paris