We’re finally through the long slog of winter, and Chicagoans are looking for any excuse at all to be outside enjoying the weather. One of the best reasons to go out is to have a picnic, and the city is full of great locations for it. From tranquil parks that make you feel like you’re in the countryside to the nicest spots beneath the skyscrapers, here are Chicago’s 10 best spots for a picnic. 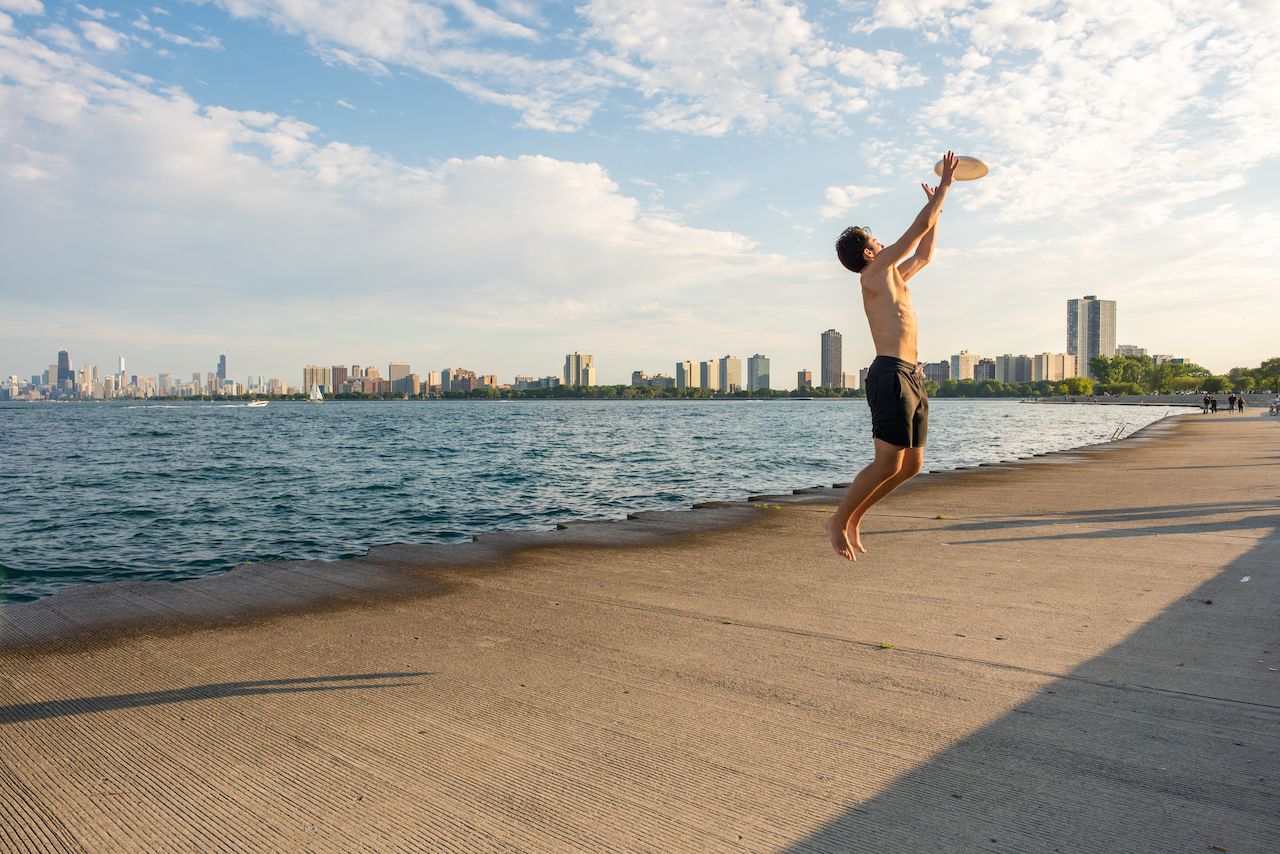 Montrose Beach and the park space around it has it all when it comes to picnics. There’s so much space that you can always find a spot even in the peak of summer. There are grills provided so you can barbeque, and it’s a short walk between the beach, Cricket Hill, the soccer fields and baseball diamonds, the lovely Montrose Point Bird Sanctuary, and the scenic harbor with great skyline views. This may just be the ultimate Chicago picnic spot.

If you’re looking for a great spot on the South Side, Promontory Point is a man-made peninsula that juts out into the lake from the Hyde Park neighborhood. The lush green grass or the seawall beside the lake both make great picnic spots. There are just enough trees so that it’s easy to find a great spot in the sun or shade, and the vantage point from out on the lake gives you great views looking north toward the skyline.

Where: 55th Street at the lake 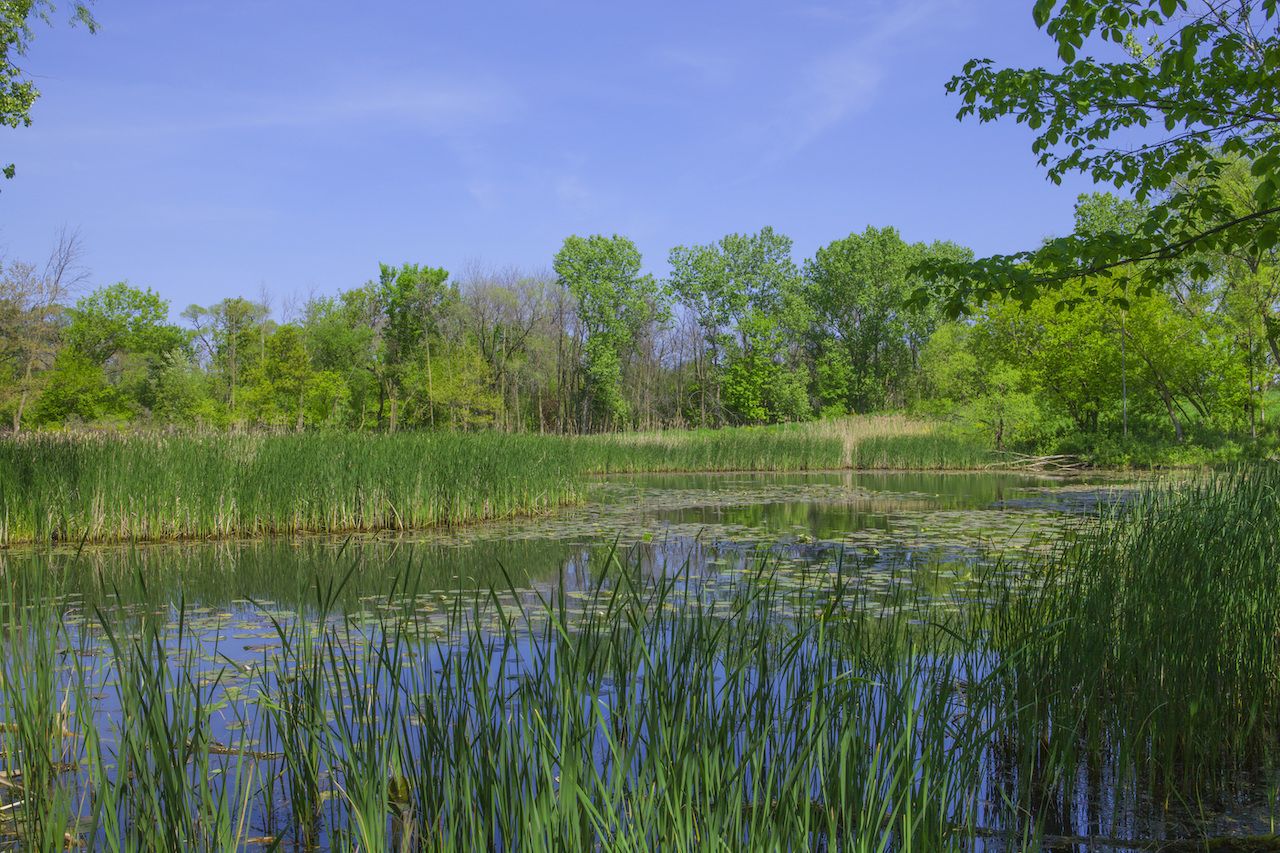 The lawns around North Pond not far from the Lakefront are among the city’s most scenic spots. If you look down you might feel like you’re 50 miles out of the city, but then look up and see the stunning skyline rising up over the treetops. It’s the ultimate contrast between city and nature, and it makes a great picnic spot. You can find a spot near the pond itself, or just sit on some grass in the huge open fields. While you’re there, the nearby Peggy Notebaert Nature Museum is a great but underappreciated place.

Where: Cannon Drive, between Fullerton and Diversey

Northerly Island is actually just a peninsula that juts out into the lake from the Museum Campus area. It is east of Soldier Field over the harbor, and south of the Adler Planetarium. The 120 acres here used to have a small airport but today hold a beautiful nature preserve. You can picnic at the small but nice 12th Street Beach, along the harbor wall or the seawall facing the lake, or in the restored native prairie where over 250 different bird species have been seen in recent years. While on your way, you’ll pass the city’s best skyline views near the planetarium so you might want to just set up your picnic there, but it’s worth going just a bit further for this lovely urban prairie on the lake.

Where: Past the Museum Campus, at Roosevelt and the lake 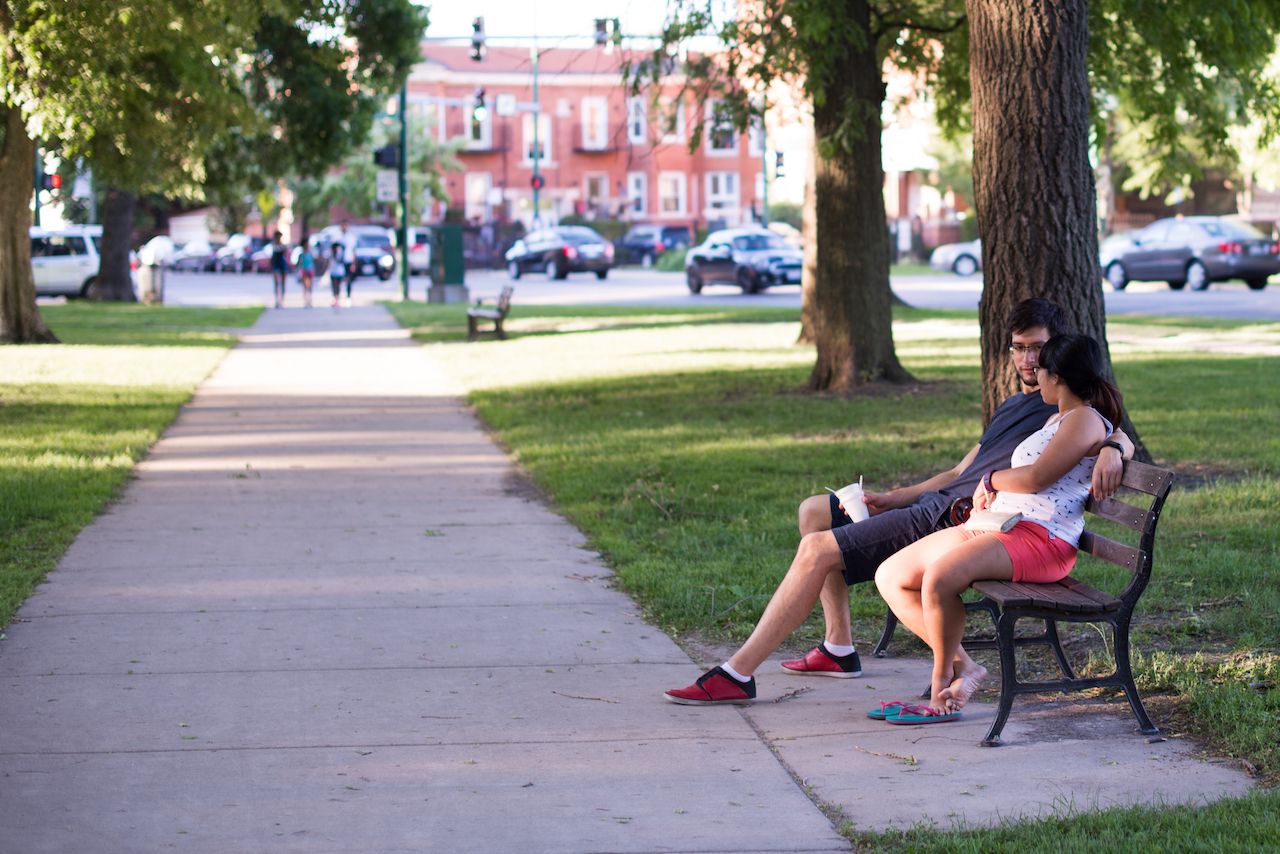 The Boulevard System runs over 26 miles of connected streets in the city, each with wide green spaces along the roadsides. There’s no better place in the city to enjoy these green spaces and the beautiful historic homes along them than in Logan Square. There’s plenty of grass along the one mile of Logan Boulevard and the half mile of Kedzie Boulevard, but if you want to dine a bit further back from the road, head to the extra wide Palmer Square, or the Logan Monument with its iconic statue of an eagle atop a tall stone pillar.

Rogers Park is often overlooked by those who don’t live there, but it’s one of the city’s coolest and most diverse neighborhoods. Prinz Beach Park is Rogers Park’s best spot for a picnic. The setting along the lake is perfect with plenty of grass, lots of beach, sunshine, shade, murals, and jungle gyms and swings. The long pier that sticks out into the lake here is an especially nice spot on hot summer days since there’s almost always a breeze, and it can be fun watching the serious fishermen working to bring home dinner.

Where: Pratt Avenue and the lake 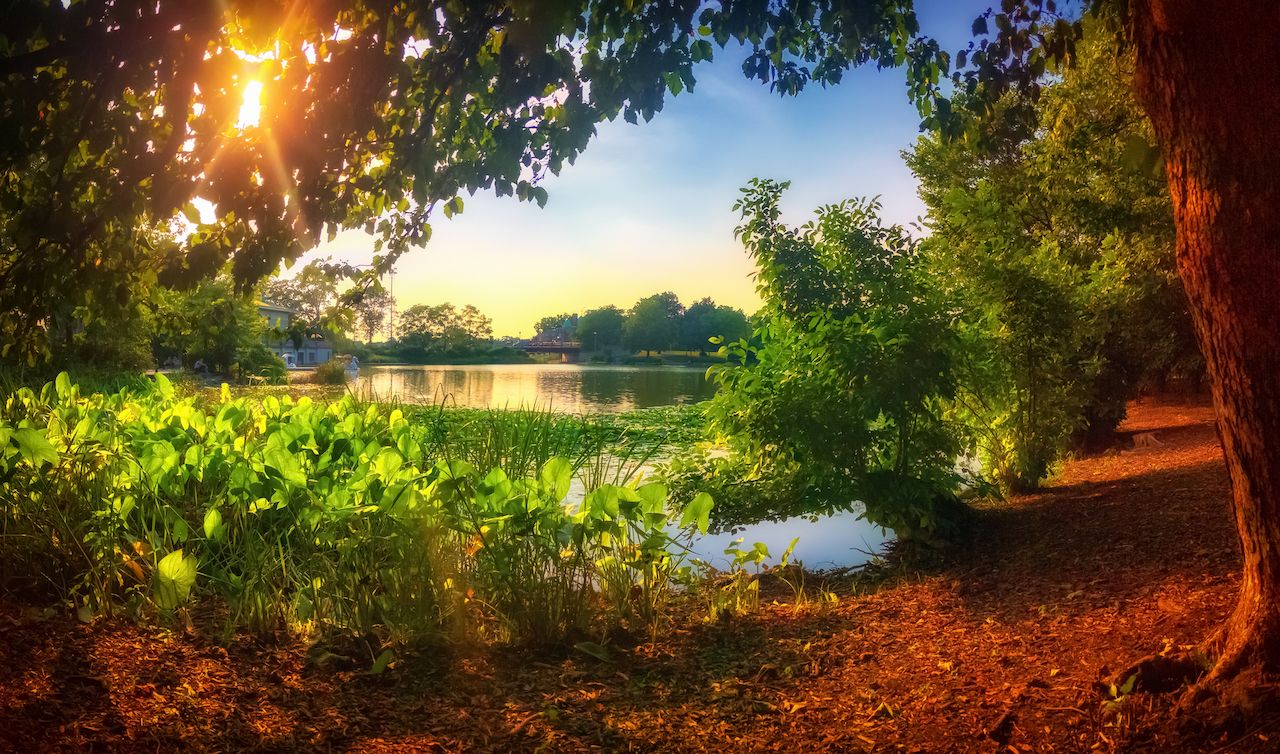 Humboldt Park is one of the city’s nicest and has so many great spots for a picnic. A few of the best are the sledding hill, anywhere around the lagoon, near the wetlands, and in the formal gardens. If you love sports, there are also some very competitive baseball and softball games out there on summer weekends. While that action isn’t at the professional level of a Cubs or Sox game, you can’t argue with free.

While technically within the city limits, LaBagh Woods feels worlds away. The surrounding neighborhood of Sauganash already seems more like the suburbs than the city, and LaBagh Woods feels like Wisconsin. There are great hiking and biking trails that lead through wetlands and forests, and the scenic North Branch of the Chicago River runs through all of it. Along Foster Avenue is a large grassy area that’s great for a picnic. For larger groups and to use the picnic shelters, you need to make a reservation with the Forest Preserves of Cook County.

Where: Along Foster, east of Cicero 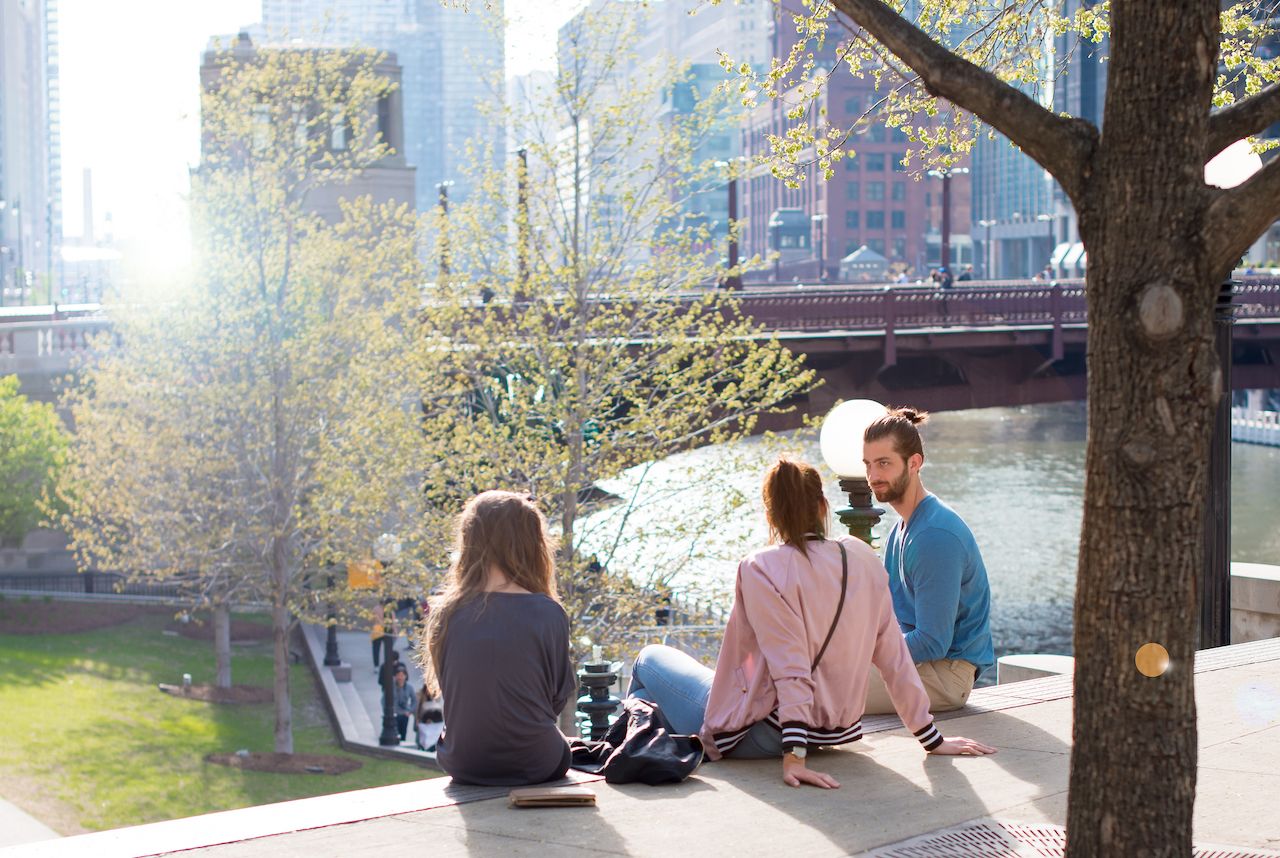 The Chicago Riverwalk has only been open a few years and it’s already become a favorite picnic spot for tourists, office workers, and everyone in between. The lunch break crowd usually goes for the concrete terraced levels leading down from street level to the river, but you can step your game up and find a spot of grass to sprawl out on. The best is at the west end just before the Lake Street Bridge, overlooking the Wolf Point fork in the river.

Where: The north bank of the main branch of the river

10. Literally any grassy spot you can find

Chicago’s city motto is Urbs in Horto which means “city in a garden.” This isn’t just an empty slogan either; the city is full of parks, some hundreds of acres and others not much bigger than a typical house lot. Winter is long, picnic season is fleeting, so the important thing isn’t so much where you go, but that you go. Open Google Maps, zoom into your area, and you’ll find blocks of green. These can be urban gardens, parks, forest preserves, bike trails, or boulevards. Get some good friends, good food, and find a spot in the grass for a picnic.