No trip to Philadelphia is complete without a visit to Reading Terminal Market. The food and goods market is one of the oldest and largest in the country, and it has been continuously operating since 1893. It is no wonder that it is a well-known Philly must-stop destination. Locals and tourists alike love it.

When visiting Philly and Reading Terminal, your first instinct might be to grab a cheesesteak. However, upon entering Reading Terminal Market, you’ll be taken aback by how lines wrap around the corner for many of the businesses. Also, you may be hit with the aroma of hot nuts or chocolate —depending on which entrance you use. That’s because the city boasts a diverse food scene, which is reflected in the more than booths packing into the market. Offerings range from Asian to Amish to an old fashioned meat counter. 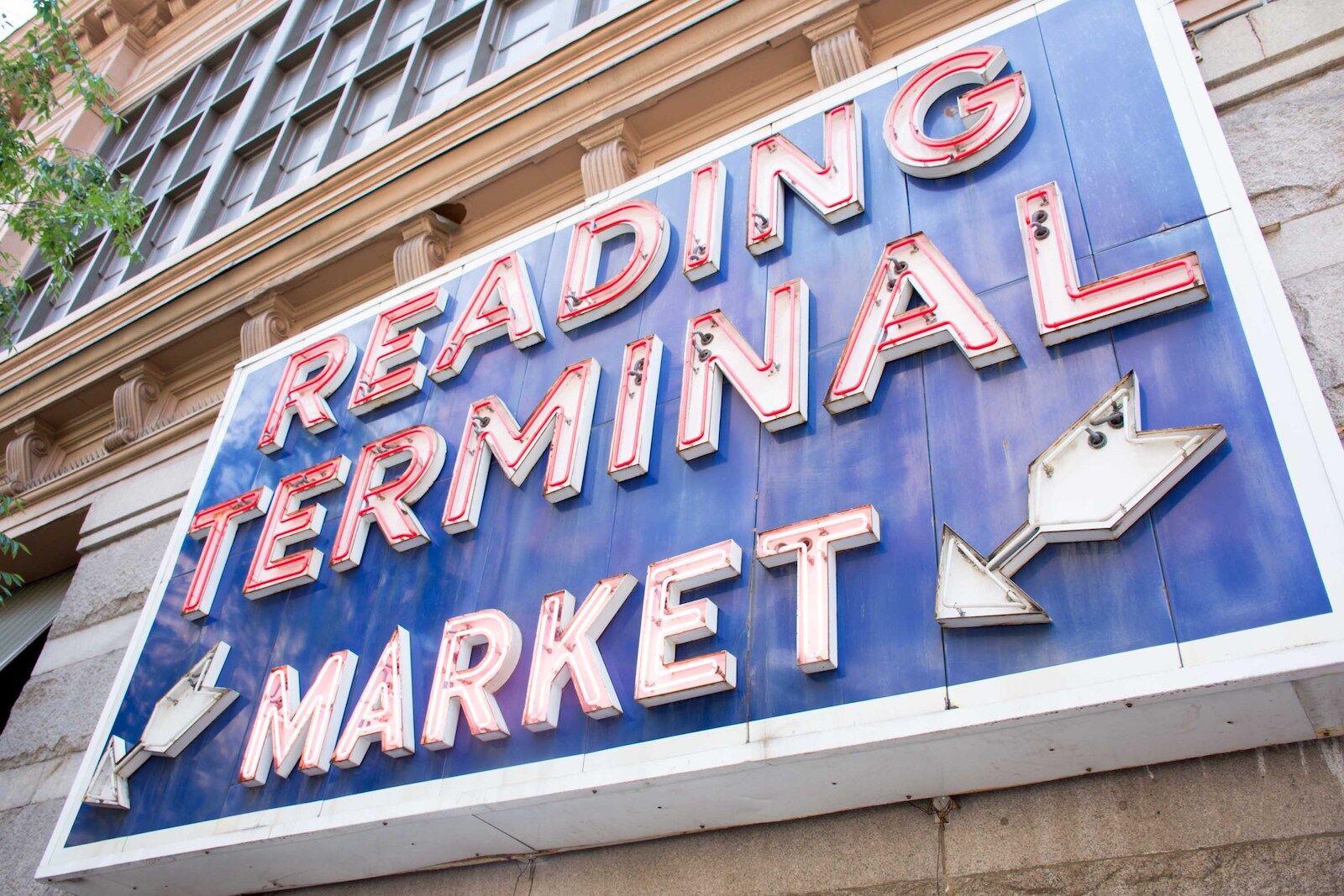 The name alone should set off a spark of rengoition and lead you to this famous deli counter, which is considered the best Jewish deli outside of New York. Herschel himself was a chef for 40 years at Katz’s Deli, and he knows his way around a pastrami. Herschel’s has been making food good enough to share with your own family since 2000.

What to order: Try various Jewish deli classics, including a reuben (turkey or pastrami), matzo ball soup, or a knish dog. 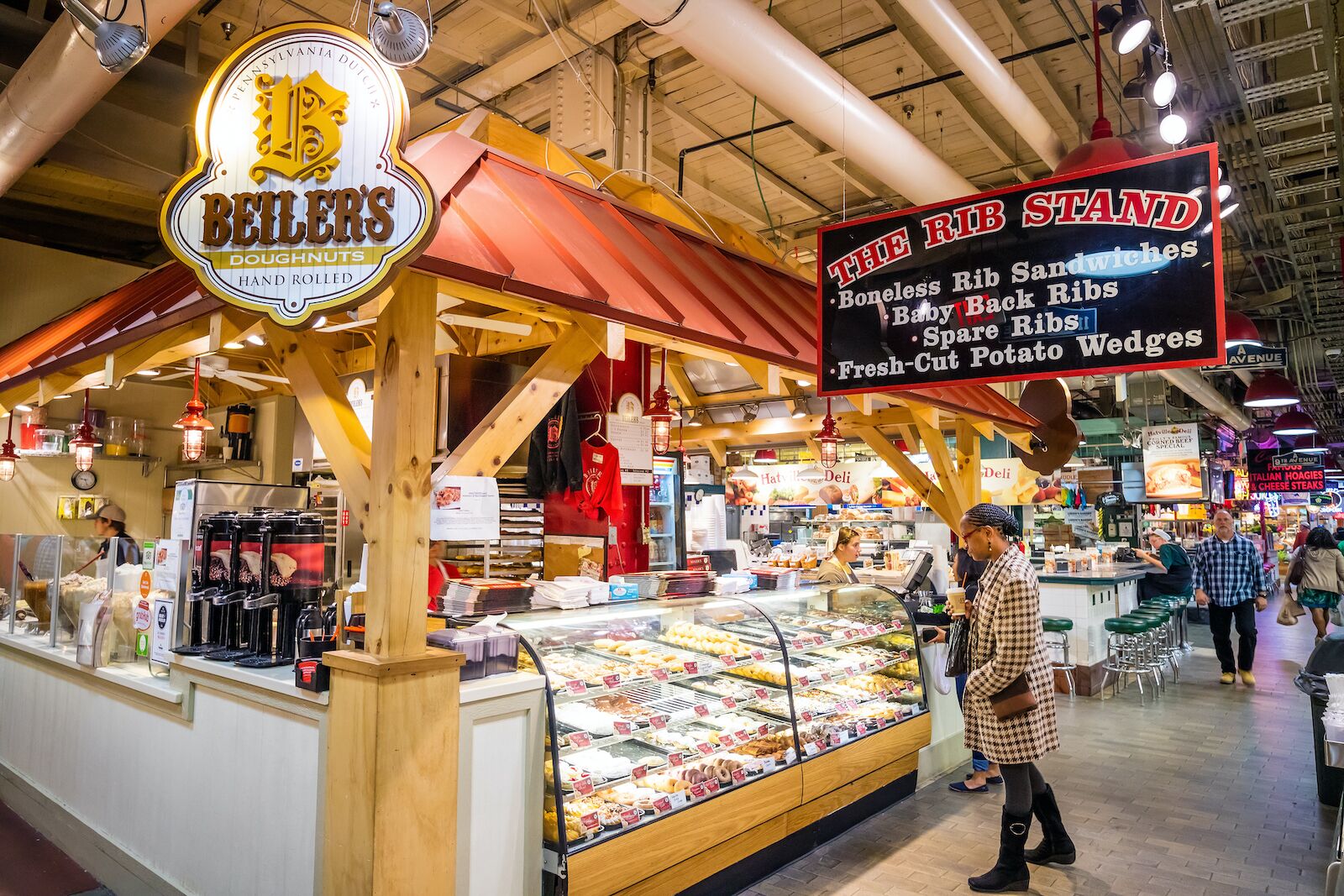 Pennsylvania Dutch culture is deeply embedded in Philadelphia’s food scene, and most people, no matter their background, have indulged in this community’s legendary baked goods. This bakery joined Reading Terminal over 30 years ago as one of its first Amish businesses, and has since branched out to other locations in the city.

What to order: It would be remiss to skip a Beiler’s donut. All of the flavors are memorable, but caramel apple and peanut butter cream are so delicious you might find yourself returning to Philadelphia just to get your hands on another one. Also, make sure that you load up on the pumpkin flavored cookies with cream cheese icing and the apple or blueberry fritters.

Keep your eye out for the multi-colored neon sign, then brace yourself to wait in line. Make sure you grab cash first, though, and enough in case you decide you come back for more. Little Thai Market is a booth that tourists may walk by without a second glance, but the place is mobbed by locals – so you know it must be good.

What to order: Without a doubt, the salmon curry. This is the most popular dish, and it consists of grilled fish, a fragrant curry broth, broccoli and rice. The stall is also known for its coconut soups and shrimp pad thai. The wins don’t stop there, since the booth has an adjoining marketplace where you can pick up supplies like Thai basil and galangal to take home. 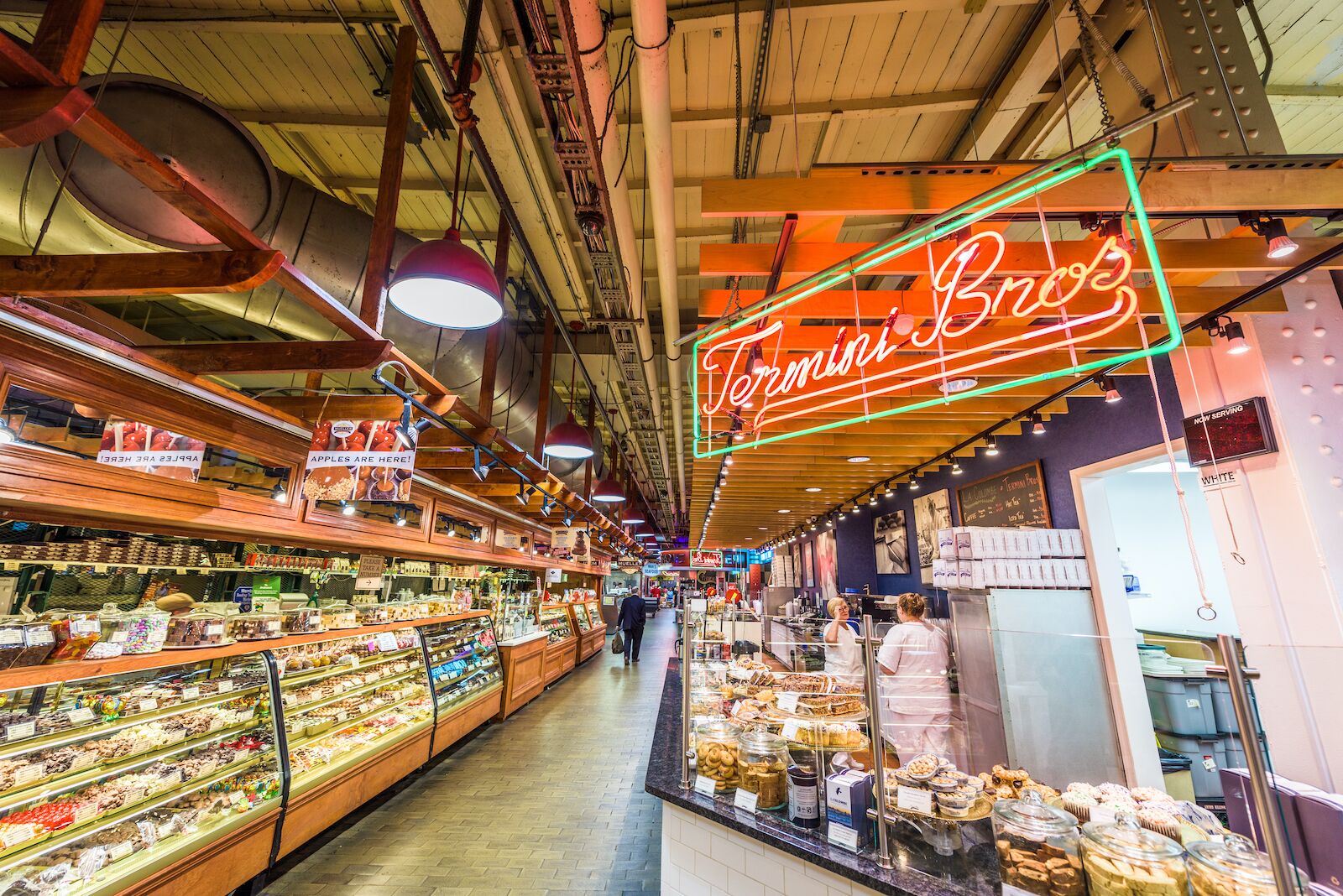 After 94 years, Termini is still a South Philly favorite, and it is considered among the best Italian bakeries in the city (and some would argue the best). The bakery’s specialities are their Sicilian desserts, in particular, the cannoli.

What to order: First things first, decide on your cannoli filling, because there’s no way you’re leaving that counter without one. Consider the ricotta cream with the chocolate chips. While you’re at it, grab a pound of the butter cookies and maybe a sfogliatelle – leaf-like layers of thin pastry filled with cream.

If you close your eyes and bite into a po’ boy from Beck’s, Reading Terminal will suddenly feel like Bourbon Street. The stall brings a taste of New Orleans to Philly with spice and style.

What to order: The jambalaya topped with etouffee or gumbo, or even by itself is always a good choice. Their shrimp and vegetarian po’ boys might also have you skipping back for a to-go order.

Vegan food never tasted better, and even folks who love a good capicola will venture over to Luhv’s to try their meat-free version. The passion project of the Argentine Lucci family was born out of wife Sylvia’s health scare at 49. Since husband Daniel was a chef, they decided to transition to a plant-based lifestyle.

What to order: Daniel’s background paid off, because the owners have really captured the flavor profiles that we love from a good meat-filled sandwich. With that being said, you can’t go wrong with anything here. The deli offers more than just meat-free cold cuts, but the biggest hits are its reuben, the bagel and lox, and the Italian hoagie. 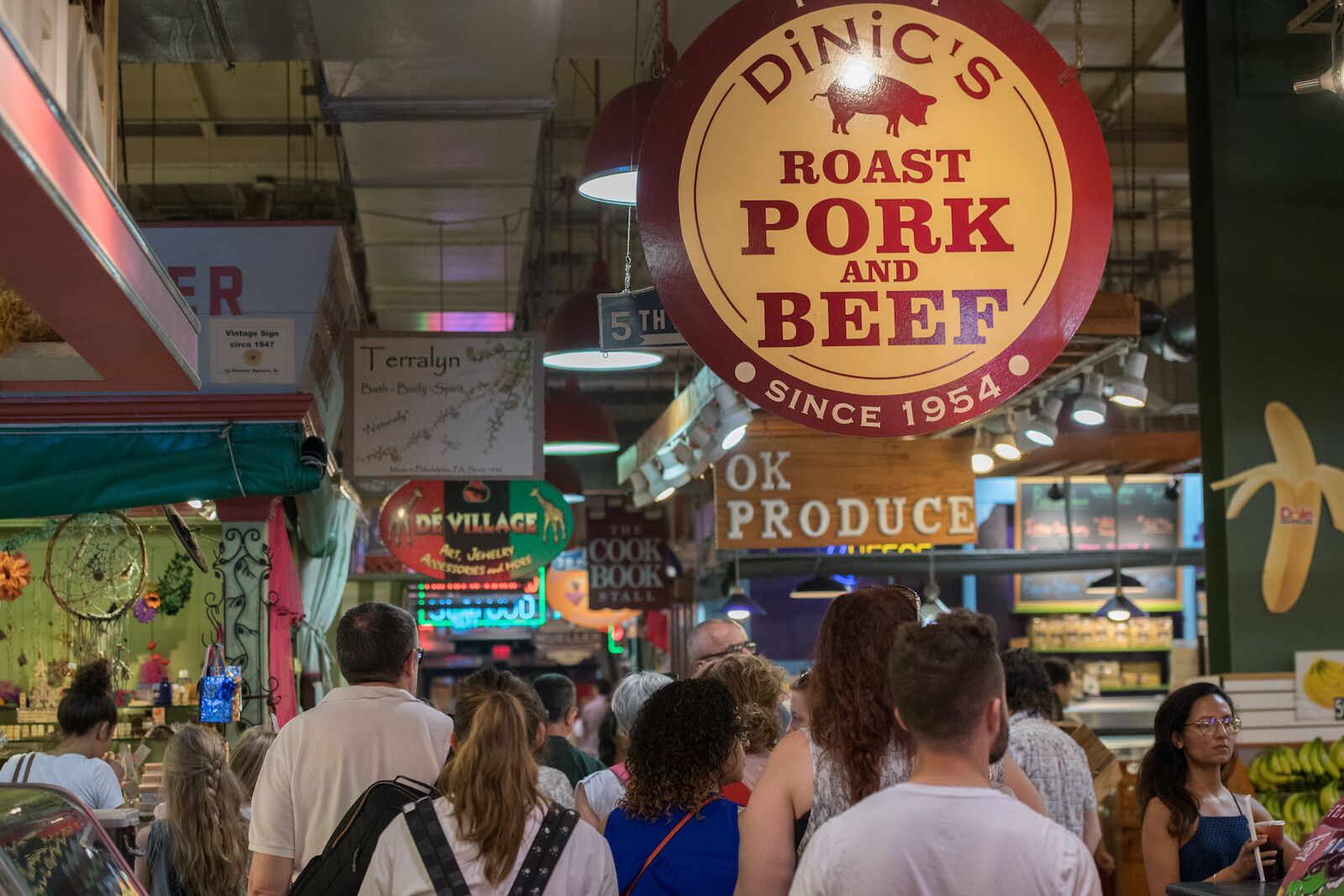 Philly natives know that the cheesesteak isn’t the only must-try sandwich in the city, and some may argue that it is actually the inferior sandwich. DiNic’s has a very small, straightforward menu, but the stall is best known for the roast pork and roast beef sandwiches.

What to order: The roast pork Italiano topped with broccoli rabe and sharp provolone. Don’t forget to ask for a side of horseradish. Also, the roast beef can be ordered the same way, with a long hot (a type of mild, sweet pepper) on top. Their meatball sandwich with provolone is also delicious.

Flying Monkey opened in 2010, and has since earned a reputation as one of the most creative bakeries in the city. Owner Elizabeth Halen has been making both traditional and decadent treats as well as those with modern, nuanced flavors before it became hip to think about dessert that way.

Visitors with dietary restrictions have plenty of options at the market, too. Fox and Sons offers 100% gluten-free (and occasionally vegan) country fair-style foods. This booth is a godsend for someone who’s missing the fried comfort foods they might have given up in the name of health. However, everyone in line isn’t avoiding gluten––the offerings are tasty enough for anyone who craves carnival foods.

What to order: Fried cookies and cream is similar to a fried Oreo, and the classic corn dog can be made vegan if you desire. The vegan banana funnel cake is the perfect chaser to the cheeseburger fries.

This award-winning cookie booth has been serving goodness for over 40 years. The company has grown quite a bit, and it now operates in four locations, including at the Jersey Shore.

What to order: You can’t go wrong no matter what you order here, but the most memorable flavors are the cranberry macadamia oatmeal cookie, chocolate chip cookie, white chocolate macadamia, and the peanut butter cookie.