For tourists, Ireland conjures images of picturesque countryside, dark beer, and mystical towns and villages. However, for surfers, Ireland hosts waves every bit as consistent as the pints of Guinness served in a real Irish pub. With many hundreds of miles of Atlantic-facing coast, Ireland gets surf all year round. Whether you are looking for gentle beach breaks or board-breaking slabs, somewhere in Ireland will have the kind of waves you are looking for. Here is what you need to know about surfing in Ireland and some great spots to check out around the Irish coast.

Surfing on the Emerald Isle 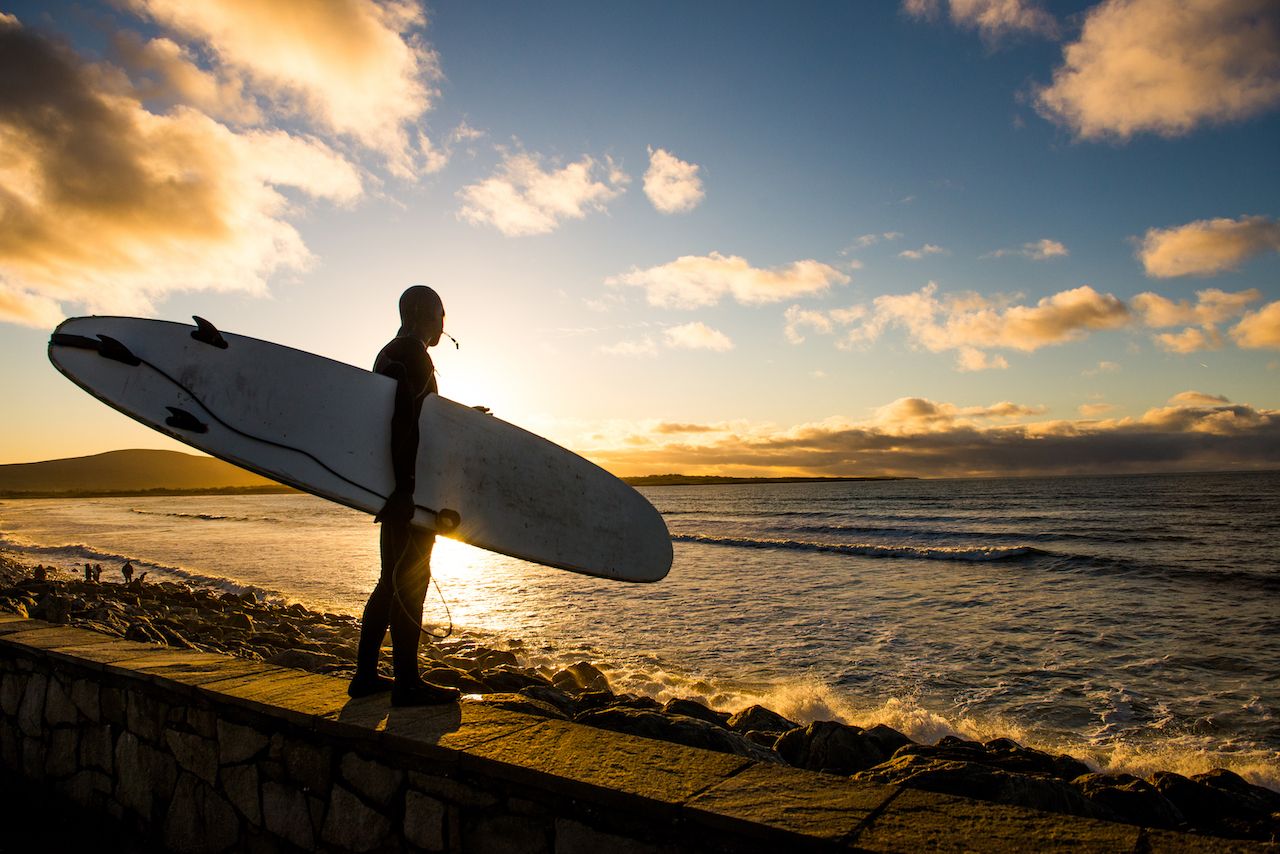 While Ireland enjoys surfable waves all year, spring and fall bring the best of Irish surf, with lighter winds and warmer temperatures than you might find in winter and fewer crowds and bigger swells than in summer. Also, Ireland is also not quite as cold as you think. A 5/3 wetsuit will do for most of the year; during summer, a 3/2 wetsuit should be fine for shorter surf sessions.

While Irish lineups are no longer as empty as they once were, you can still find epic uncrowded surf on Ireland’s shores. A look at a map of Ireland’s Atlantic-facing coastline reveals hundreds of potential setups just waiting for the right combination of swell, wind, and tide. Even if you don’t find any secret spots, Ireland can still be a great place to go on a surf trip. To make the most of any Irish surf trip, fly into Dublin or Shannon, rent a car and go exploring. 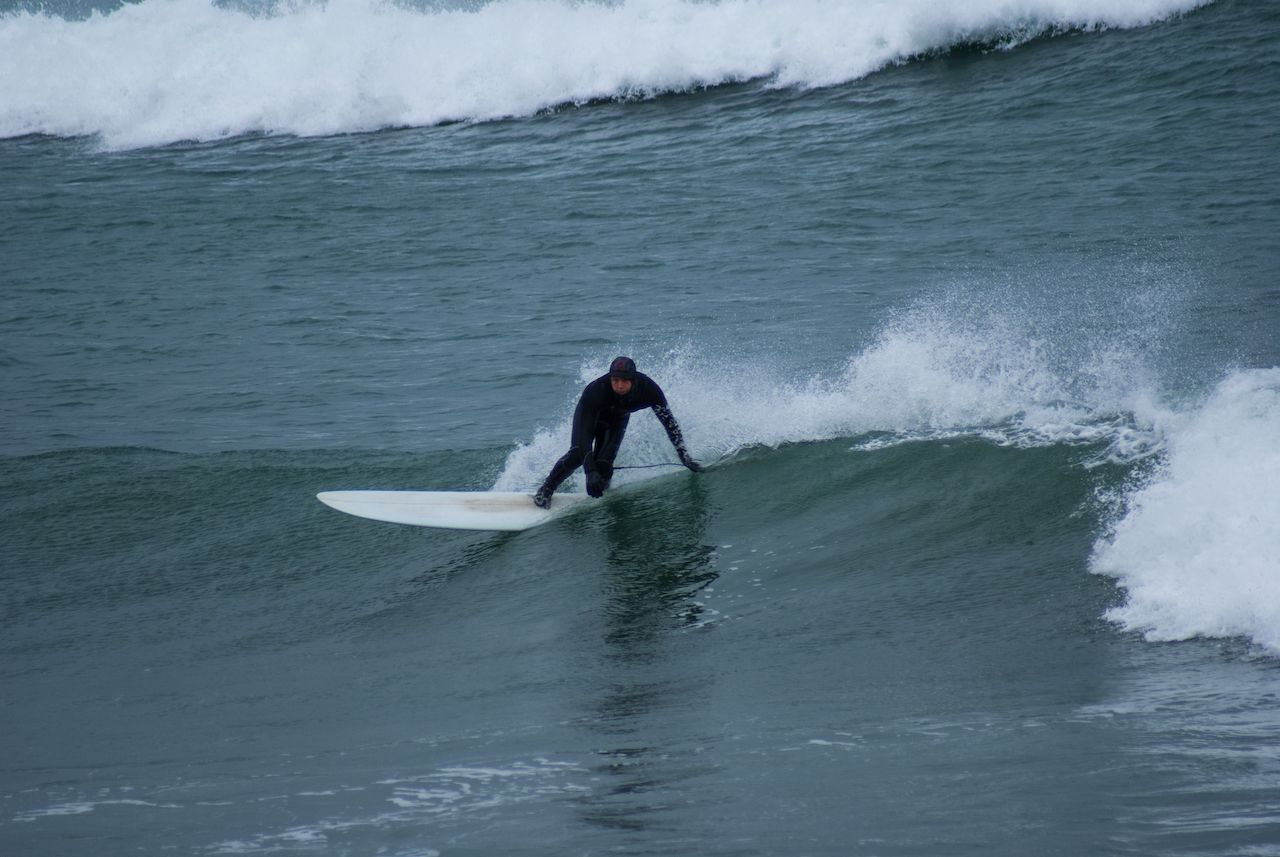 Strandhill is a small surf town on Ireland’s west coast around 2.5 hours from Dublin in County Sligo. The town leads onto a long sandy beach. Strandhill beach itself is a great surf spot in its own right at high tide. Home to several surf schools, Strandhill is also an excellent place to learn to surf when the tide is out. Strandhill town has an excellent selection of places to eat and stay and makes a great base for exploring Ireland’s northwest coast.

While Strandhill beach is not a bad surf spot, it’s the reefs nearby that make it worth sticking around here. The village of Easkey, around 20 minutes’ drive east, is home to a pair of right- and left-hand reef breaks that are some of the most consistently good surf spots in Ireland. Easkey Right and Easkey Left break at all tides and pick up lots of swell. The predominant southwesterly winds are also offshore here, which are the best kind for surfing. The coastline nearby holds a whole range of other spots that can be easily discovered by driving around the coast when the surf is up. Check out the town of Enniscrone on a big north swell, and you might find a legendary right-hander. 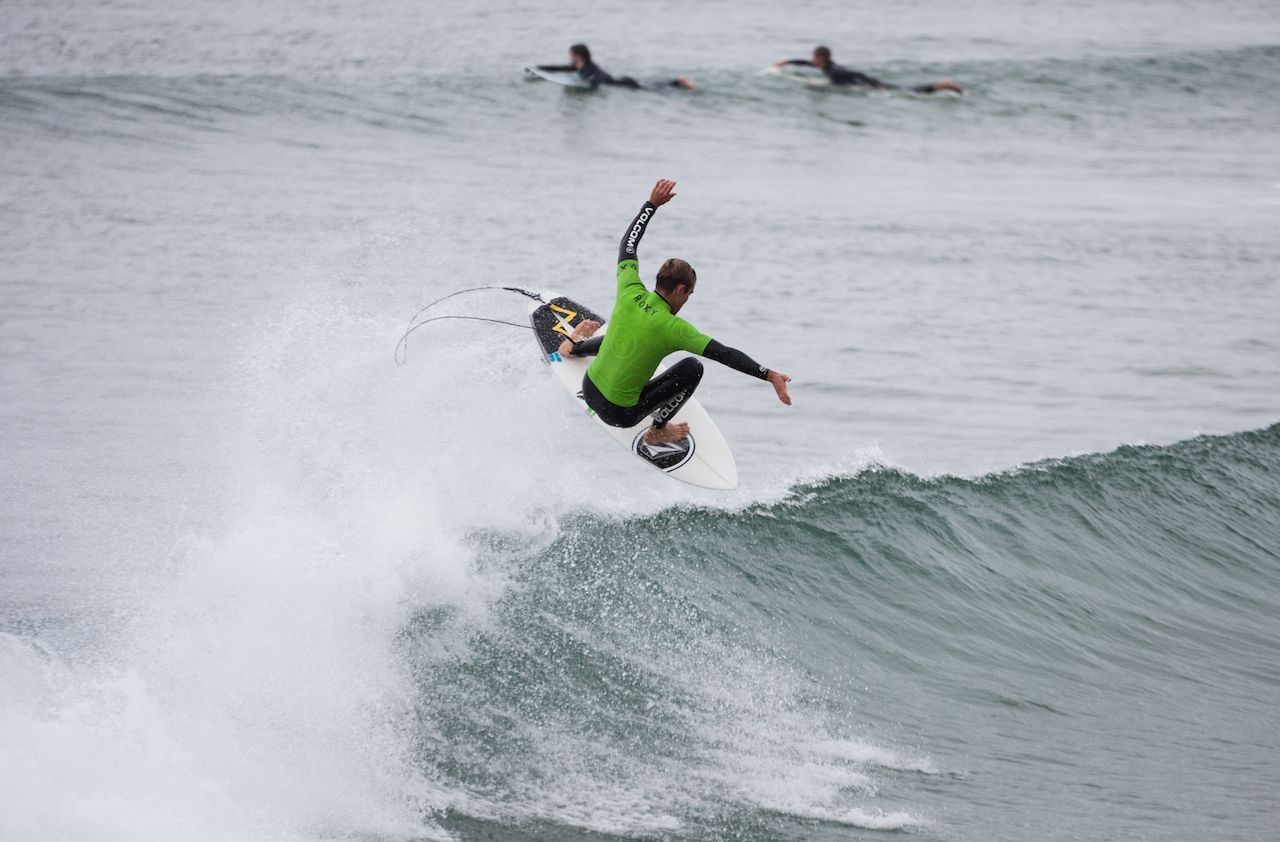 North of Strandhill, Bundoran lies within Ireland’s northernmost county, Donegal. Bundoran town looks straight out onto one of Ireland’s best waves: The Peak. This reef break, a short and hollow right with a longer left, is consistent and breaks from two to 10 feet high. The village also has a host of other spots within a short distance, including Tullan Strand, a beach break that is great to learn on and can have fun waves when everywhere else is flat.

Bundoran traditionally had a reputation in Ireland as a rough and ready beachside holiday location, but surf tourism boom is changing that. The town is now home to a whole range of surf schools, as well as some great new cafes and shops. You can now sip single-origin coffee while looking over one of Ireland’s best surf spots.

Beyond Bundoran itself lies even more excellent surf. A short drive in either direction from town will bring you to some of Ireland’s heaviest surf spots, including the famous big wave spot near Mullaghmore Head to the southwest. An infamously heavy left-hand reef called Pampa (named after an insurance company, for a good reason) is also near Bundoran. Pop into one of the local surf schools to ask for advice on where to go, and be sure to ask a local before paddling out at any new spots here. 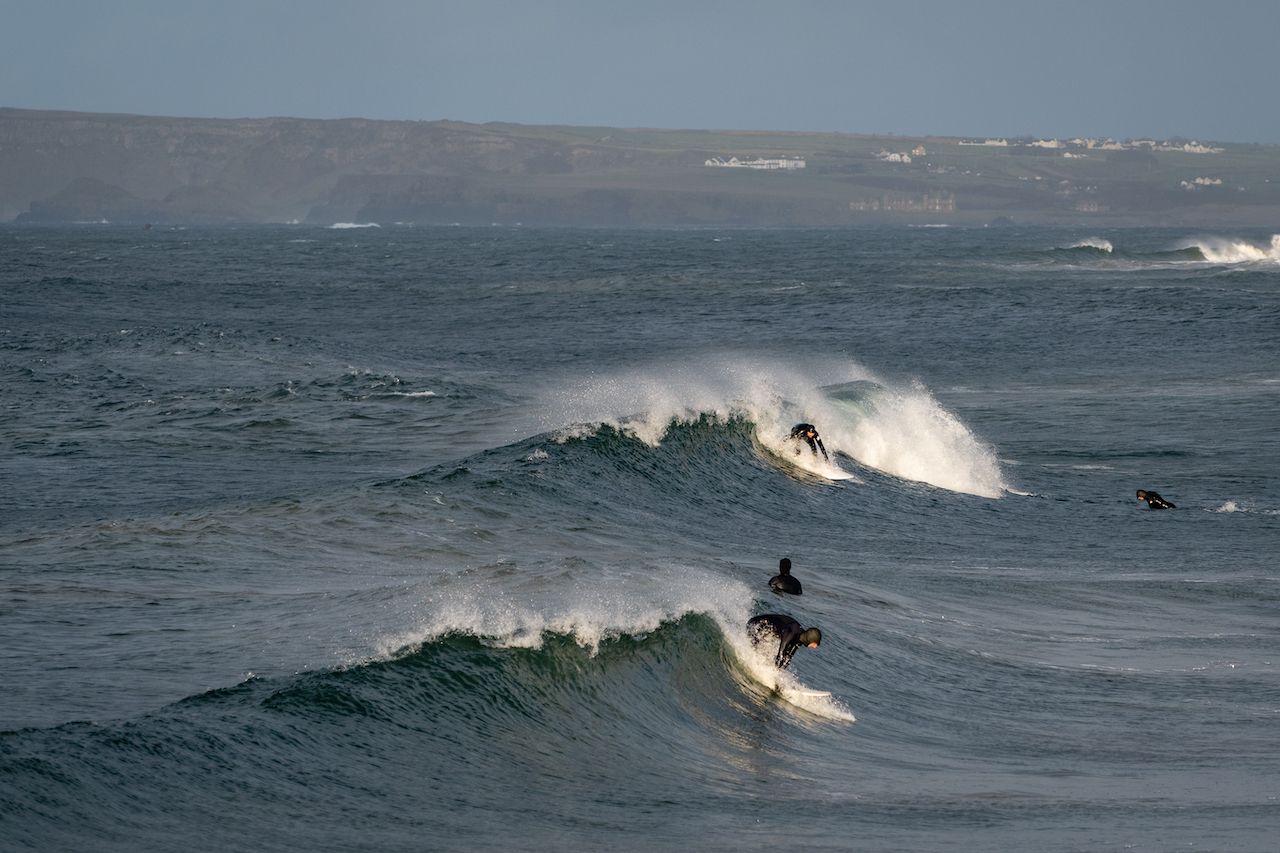 At the top of the island, Ireland’s northernmost coast is often underrated as a surfing destination. Technically situated in a separate country, Northern Ireland, the north coast of County Antrim is a worthwhile surf zone in its own right. This area is famous for its Causeway Coast (home to the eponymous Giant’s Causeway) and picks up north swells year-round. The north coast also gets frequent offshore winds during winter storms and is home to some of the best beach breaks in Ireland.

The pleasant Victorian seaside town of Portrush is a natural place to base yourself for some northern Irish surfing. Portrush’s two beaches, East and West Strand, can produce some of the heaviest beach break surf this side of Hossegor, France. When decent-sized north swell coincides with easterly or southerly winds, sandy tubes rifle across East Strand.

Near Portrush, many other beaches can produce excellent surf on the right day too. Ten minutes’ drive east, Whiterocks beach is spectacular to look at but can also create some fun right-hand barrels when the conditions are right. For those in the know, the coastline here hides a few secret reef breaks that are best found by asking a friendly local surfer. 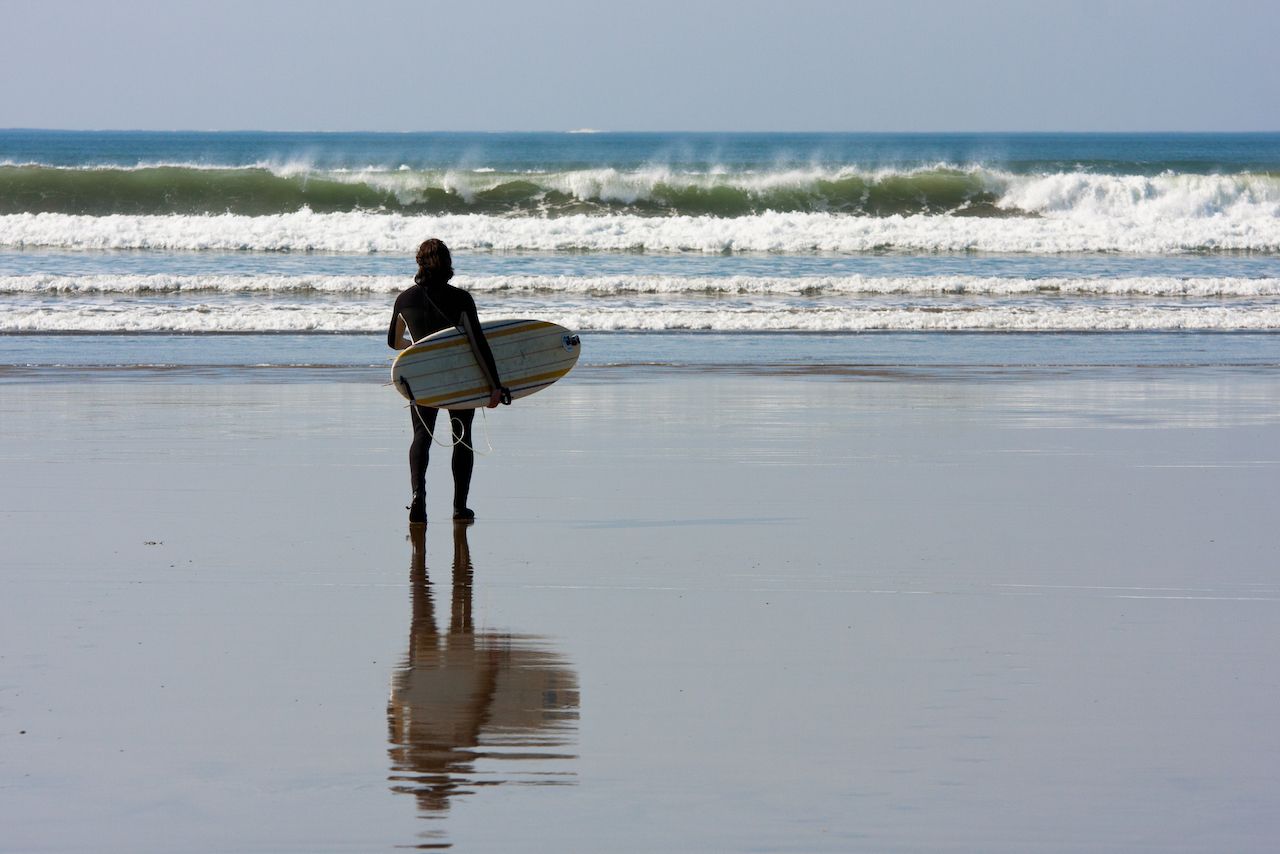 Located farther south on Ireland’s west coast, around three hours from Ireland’s capital, Dublin, the village of Lahinch used to be most famous for its golf. These days, Lahinch is as likely to be associated with tubes as tee-offs, and the County Clare village is fast becoming Ireland’s surf capital.

This new identity is due to both Lahinch’s location and natural setting. An hours’ drive north from Limerick city, Lahinch sits within Liscannor Bay in County Clare and has not only a long beach that is ideal for learning but also a suite of consistent left- and right-hand reef breaks that light up whenever a west swell meets southerly or easterly winds.

Lahinch village has some wonderful cafes and restaurants and is undergoing a food scene revival. Artisanal sourdough bread can be purchased 500 yard from some high quality reef breaks.

Only a few miles from the Cliffs of Moher, this part of County Clare enjoys a flat topography that has created a natural wonderland of waves. In and around Lahinch, you can find everything from peeling intermediate friendly reef breaks to big wave spots like the break at Aileens, which crashes underneath the Cliffs of Moher. If it’s flat in Lahinch, the beach break at Doughmore, around 30 minutes south, will have a wave. 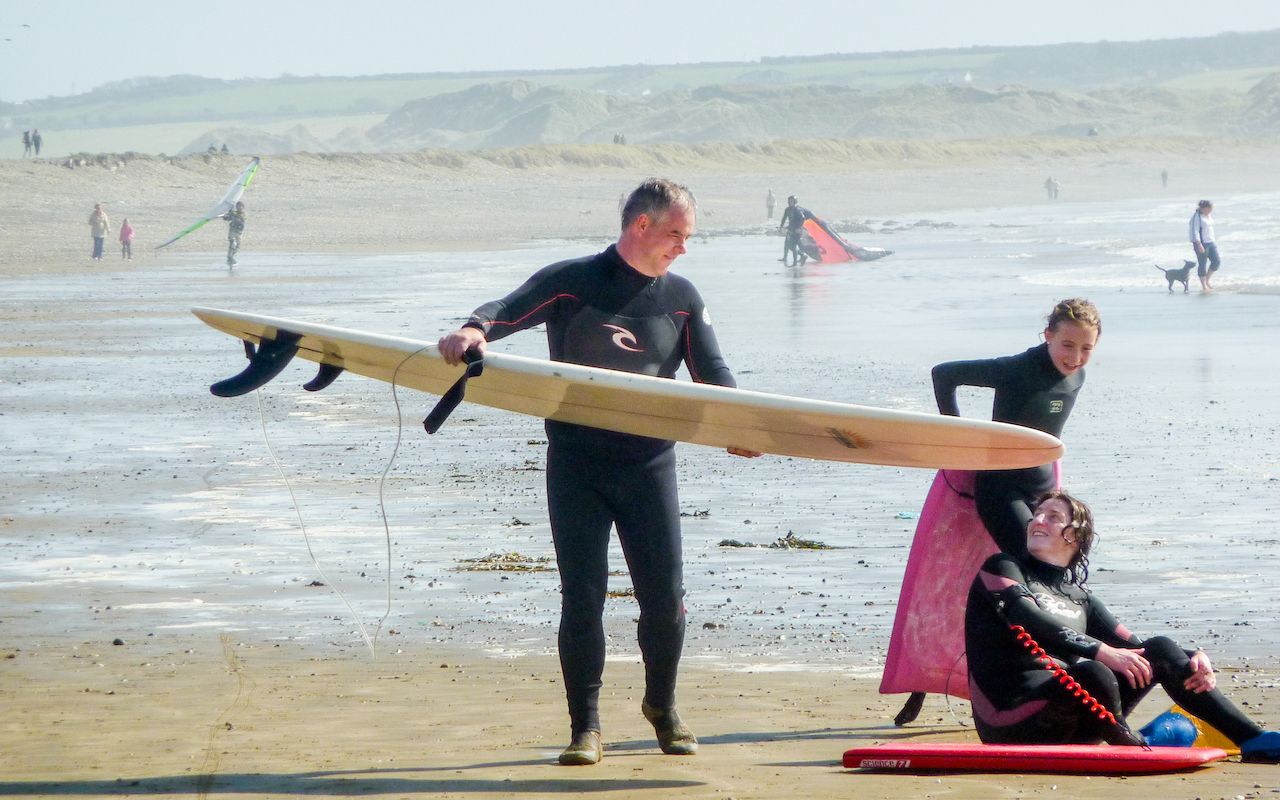 Visiting surfers often forget that Ireland’s southeast coast gets surf too. In fact, Tramore, a small town 15 minutes’ drive from the city of Waterford, is home to Ireland’s oldest surf club — established in 1969. Tramore’s location just 1.5 hours down the motorway from Dublin; a plethora of surf schools; and safe, easygoing surf all add up to make the beach in Tramore an ideal spot for learners.

Ireland’s southeast coast picks up swells from predominant southwest wind that is often onshore, the kind of wind that creates messy conditions. However, when the wind drops, or turns offshore, a range of surf spots along this coastline starts working and can rival any other spots in Ireland on their best day. Ask locals about the “incredible wave” and “the reef,” and they might tell you where to look. Otherwise, the beach in Bunmahon, 12 miles west beyond Tramore, is a brilliant surf spot when the wind goes west. Bunmahon is home to hollow beach break peaks and is within a stunning UNESCO designated area.

Like many other surfy places in Ireland, Tramore is benefiting from the boom in surf tourism. These days, a vast range of accommodation and other activities can be found around the town.

The 20 Happiest Countries in the World, 2022
This Guide To Irish Slang and Insults Will Have You Downing Guinness With the Locals in a Flash
Can You Guess What These Hilarious Irish Slang Phrases Mean?