The Cliffs of Moher is Ireland’s top tourist attraction, drawing nearly 1.5 million tourists in 2017. But while the majority of visitors take in these stunning bluffs overlooking the wild waters of the North Atlantic in one of two common ways, there is a third, less traveled route you can take. This hike is the highlight of the Wild Atlantic Way and among the most stunningly beautiful natural excursions in all of Europe.

The vast majority of visitors arrive by car at the visitor’s center. Most park there, explore the coast and take pictures, maybe wandering up the trail for a quarter mile or so in either direction, before hopping in the car and moving on. Of those who do opt to hike the Cliffs of Moher trail, most of them park at Doolin and hike south, reaching the visitor’s center and hopping the bus back to Doolin. Your hack to avoid sharing the trail with them, and spend as little time as possible with the tour bus crowd, is to start from Liscannor and hike north. Whether you opt to turn back at the visitor’s center or proceed all the way to Doolin, you’ll be rewarded with stunning views and fewer people. Here are the details. 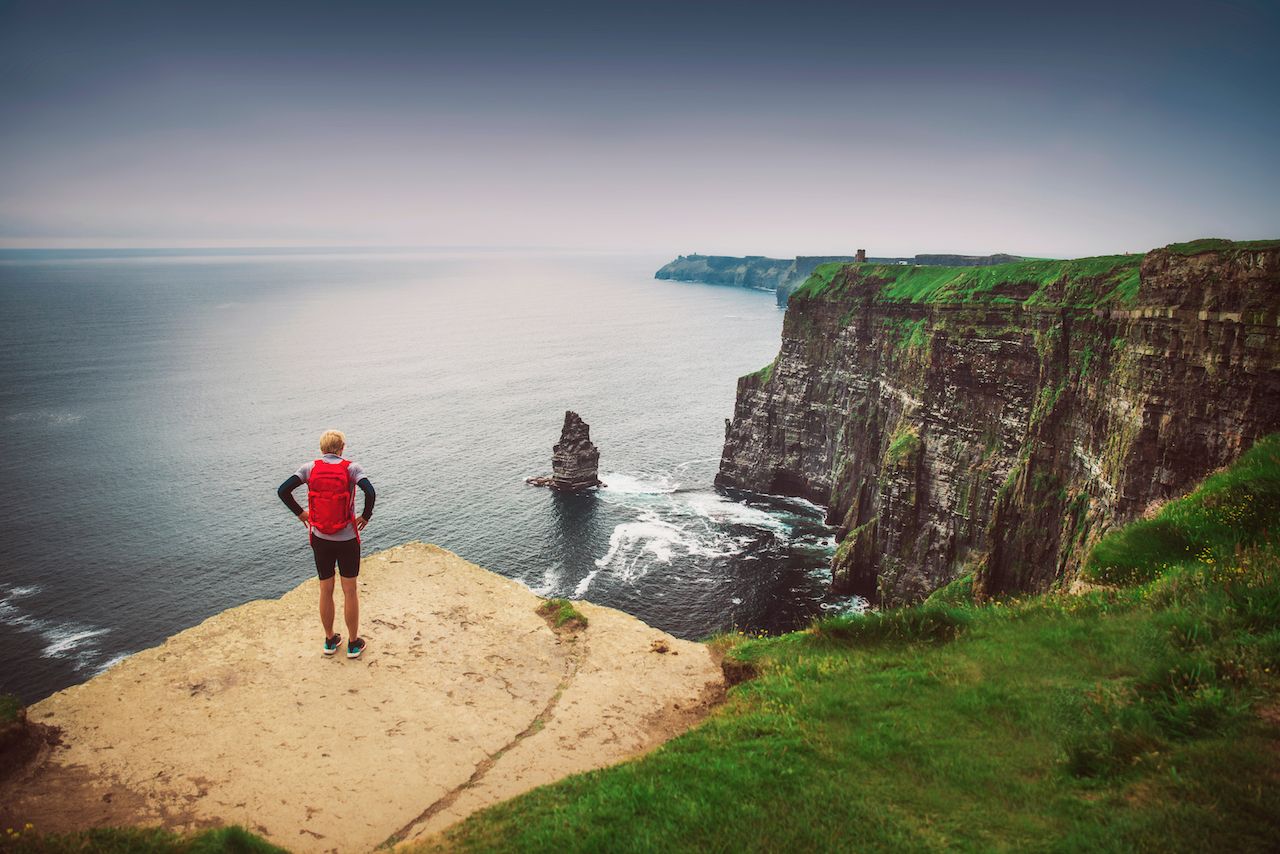 The Cliffs of Moher are a section of the Irish coastline that, at their highest point near the visitor’s center, rise 700 feet above the Atlantic Ocean. The cliffs themselves run for about nine miles, though the full hike from one side to the other runs just over 11 miles from Doolin to Liscannor.

Ireland is famously green, and the emerald hue stretches right up to the cliff line, where it gives way to dark rock formations that drop down to the sea. You can hear the waves down below, but don’t be fooled. You are very high up, and falling is not an option. The trail is well-maintained and clear, and you can make it from one end to the other in about five hours if in decent physical condition.

Pack a lunch, bring plenty of water, and wear hiking boots or, at the very least, closed-toed athletic shoes with good grip. The soft, often damp trail is largely flat but does require stepping over some rocks and the occasional slight incline or descent.

The hardest part about the hike is staying focused on where you’re going. Staring at the winding cliff band is an enticing distraction. Add in the occasional cow or horse approaching a fence along the trailside, the humid air and scent of open green fields, not to mention the subtle crashing of waves into the cliffs — and the entirety of your senses is caught up in an exciting but almost overwhelming feeling of acute awareness. You are literally living on the edge.

Part of this is driven by the fact that the Irish don’t tend to follow the US approach to cautious boundary keeping, even when bordered by deadly cliffs. The trail at multiple points runs within a few feet of the edge, and there is no boundary of any kind. Keep a hold of yourself, or you might go tumbling over the side. 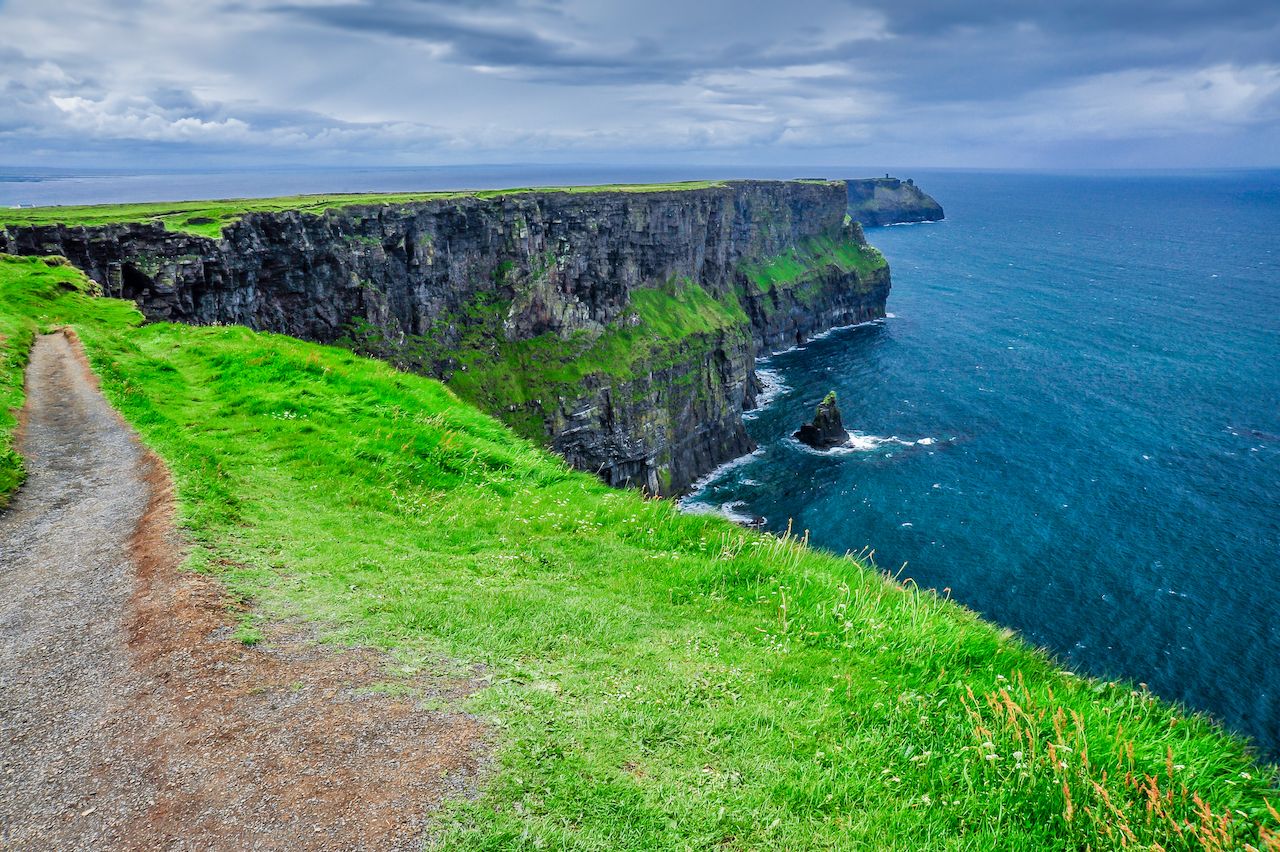 Arrive at the Hags Head trailhead early, preferably before 9:00 AM to give yourself enough time to complete the hike, have a picnic on the rocks, and get back to your car before the sun goes down or your clothes are entirely soaked through with mist — as tends to happen over the course of an active Irish afternoon. Hags Head itself is a beautiful rock formation protruding from the isle into the Atlantic. The best approach is to park at the Kilconnel Car Park, just south of Hags Head. You can also park at the Community Sports Field in Liscannor, but it takes longer to get to the trailhead.

The parking lot here is privately operated and not really advertised. Since most people park at the visitor’s center, it can be easier to find a spot here, but the lot can be tough to find. Follow signs to Hags Head from the town of Liscannor. Before passing the site, look for signs to Car Park. On Google Maps, there is a site for the park called Cliffs of Moher Liscannor Walk, which will lead you to a point just southeast of the Moher Fort Site Telegraph Station. It’s located up a dirt road less than a mile south of the trailhead, adjacent to a private home — presumably the owners of the lot. They ask for a fee of €2 (about $2.25), payable by depositing cash into a receptacle in the parking lot. Once you’ve paid, follow the path up the hill and through a gate to the Cliffs of Moher trailhead. You’ll pass O’Brien’s Tower, an old lookout tower built in the 1830s that looks straight out of a Monty Python film.

In summer, you’re likely to encounter a handful of other hikers on the trail between Hags Head and the visitor’s center, about six miles away. Outside of summer, you’ll pass a few people but will largely be hiking in solitude. Allow two hours to reach the visitor’s center, where you can tour the exhibit and walk down to the coast for a quick lunch.

The Cliffs of Moher Visitor Centre has a quick exhibit to walk through, though it tends to be crowded and is closed on public holidays. There’s also a cafe to grab a bite to eat. You can walk a quick trail down to the shore to look up at the cliffs, an excellent way to provide some contrast in your photos. 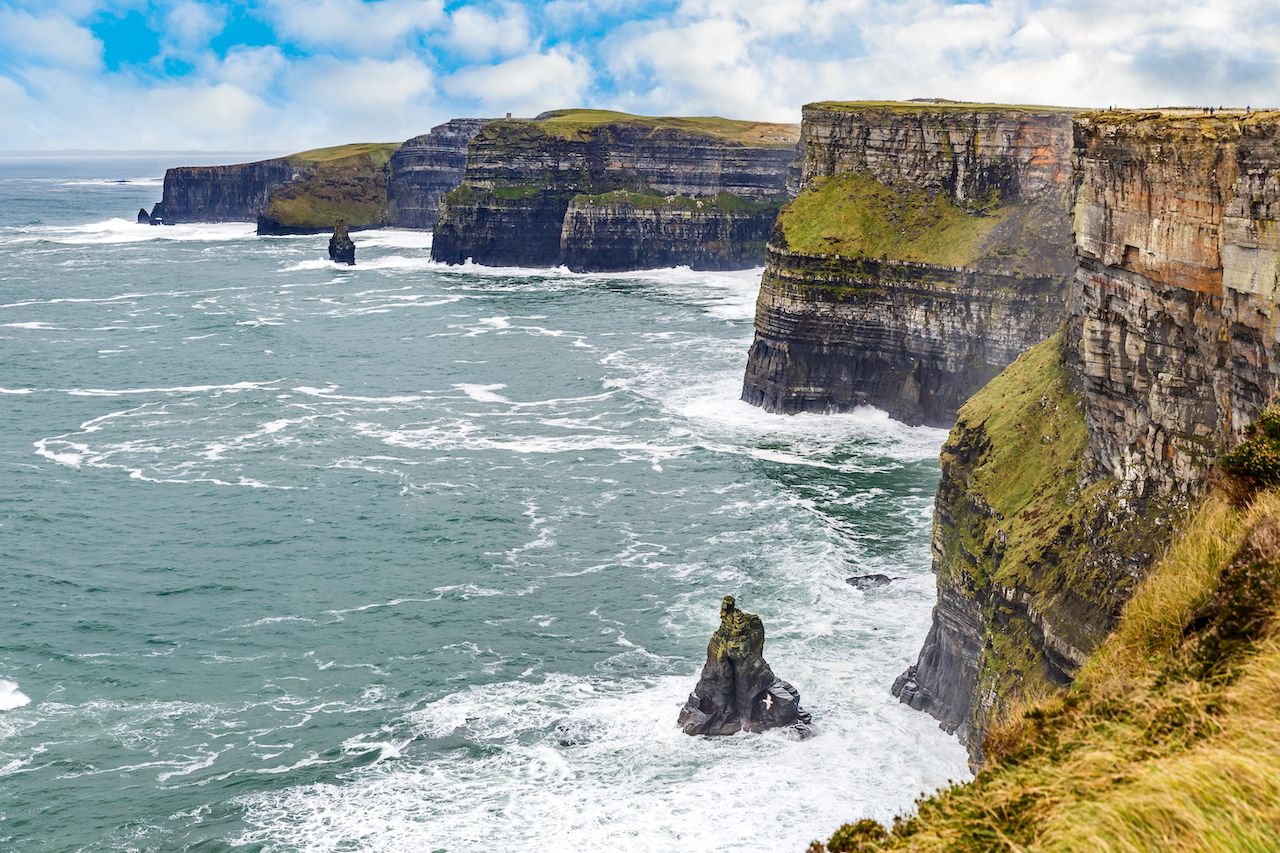 You can call it good at the visitor’s center and hop the bus down back to Hag’s Head. Or, head another two-and-a-half hours north to Doolin, using the visitor’s center as the almost-halfway point. You have about seven miles to go across similar terrain. The main difference in this leg of the trek is that the trail curves around several small, peninsula-like protrusions along the coast, providing open views back towards the visitor’s center and even further down the coast. You’ll pass by farmland and are likely to see cows and horses.

This leg of the hike takes about three hours. At points, the trail is grass-covered but still easy enough to follow as you’re just walking along or right near the cliff line the entire time. The best way to get back to your starting point is to ride the shuttle bus, which circles between Doolin, the visitor’s center, and Hags Head. It operates a car park in Doolin, but you can join the bus from Doolin and take it south to Hags Head. Both Liscannor and Doolin have hotels and pubs if you opt to stay the night. Driving back to Dublin takes about three hours; Limerick is an hour.

Road TripsThe 12 Best Things To Do on Road Trip Around Ireland’s Wild Atlantic Way
Tagged
Hiking Insider Guides Ireland
What did you think of this story?
Meh
Good
Awesome