Standing at the summit of Mount Taljanka in Kosovo, your thighs will burn and the wind may feel strong enough to knock you off your feet. You’ll look out on the valley below to see no roads or towns, only a green pasture encircled by layers of mountains reaching back to the horizon. It will feel as though you’ve stumbled on some secret land, hidden in Europe’s southeast corner. But there’s a moment like that every day on the Peaks of the Balkans trail.

Peaks of the Balkans makes a 119-mile loop intersecting the borders of Albania, Montenegro, and Kosovo. The path snakes through the Dinaric Alps, or “Accursed Mountains,” and crosses some of the most pristine wilderness left in Europe. Throughout the journey, trekkers stay at family run guesthouses, making the trail as much a cultural experience as an outdoor adventure. This combination, and a re-discovery of the Balkans among travelers, is likely to soon make the Peaks of the Balkans, or POB, a fixture of European hiking trails. Here are five reasons why you should hike Peaks of the Balkans now. 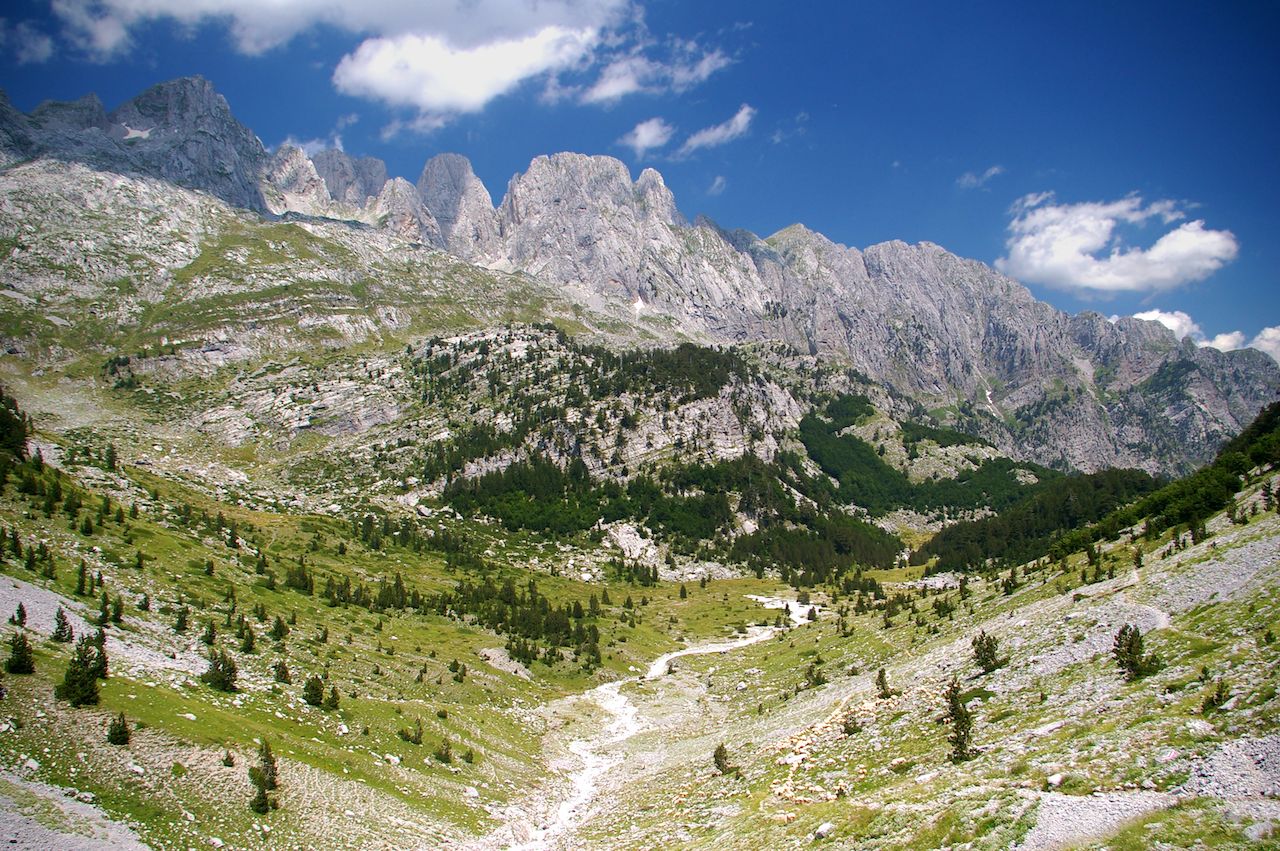 Only a generation after the political instability of the 1990s and early 2000s, the Balkan peninsula is experiencing a travel boom. Kosovo, Montenegro, and Albania are all seeing an uptick in tourism, and for good reason. The region is a backpacker’s paradise; it hosts castles, museums, beaches, mountains, nightlife, and cafe culture for half the price of Western Europe. Indeed, the region’s capital cities are some of the very cheapest on the continent.

But the Peaks of the Balkans trail remains relatively unknown…for now. One reason the trail isn’t on many travel radars is its inaccessibility. Unlike the backpacker hotspots, transportation in more remote sections of the Balkans continues to prove challenging. Day hikers around Theth, Albania, might occasionally cross paths with POB trekkers, but even this “touristy” stop on the trail is a jarring three-hour 4×4 ride over rocky mountain passes from Shkodra and up to four hours from Tirana, Albania’s capital.

On my 13-day trip, my hiking group only ran into about a dozen other tourists. These rare encounters usually occurred in a field of wild blueberry or strawberry bushes as we all paused to forage. It was a much quieter experience than in the popular mountains in northern Montenegro. But it’s only a matter of time before development reaches the isolated area and the trail’s main starting points become easier to access.

You can experience Europe’s true wilderness. 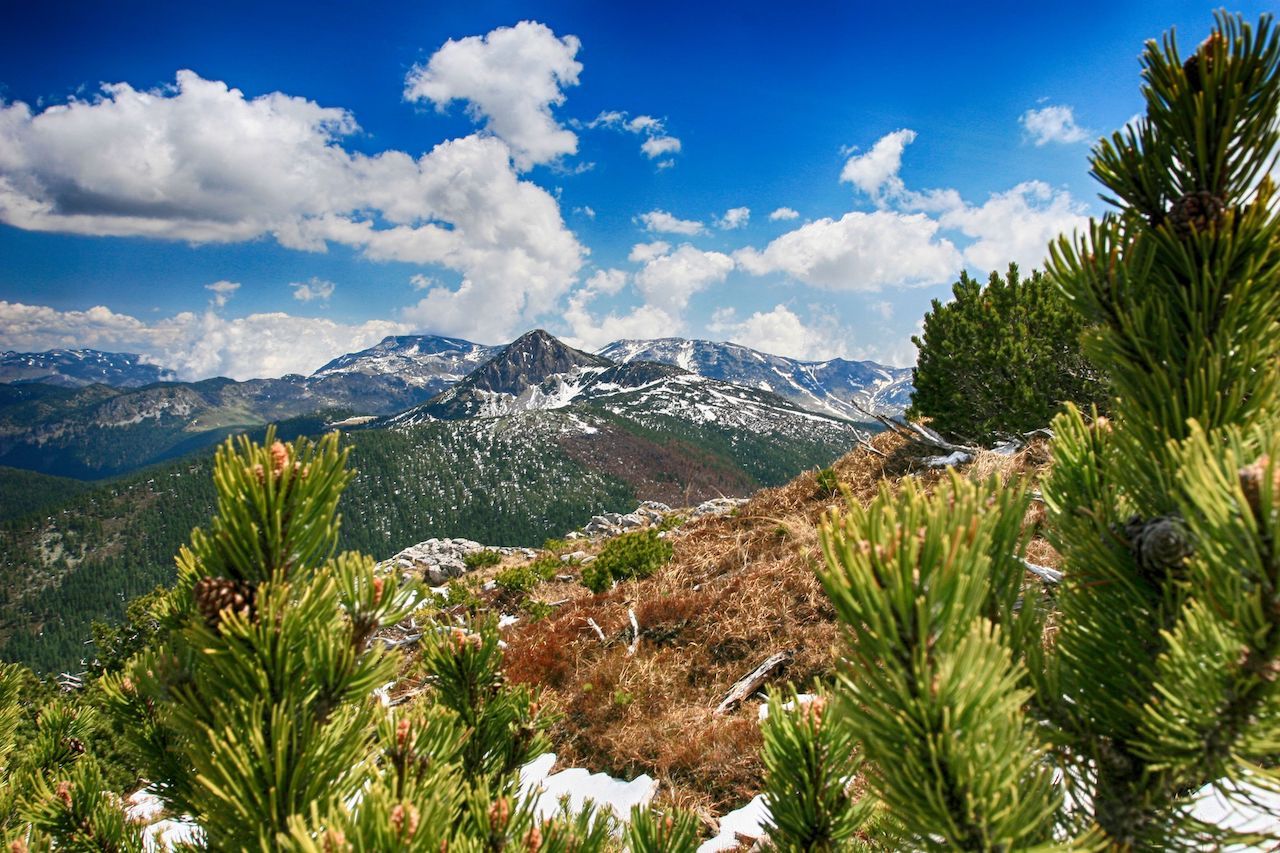 Most legs of the Peaks of the Balkans stretch from one small, seasonal village to another. Between those start and end points, trekkers will find few man-made interruptions to the scenery. When my group wandered on a family’s summer homestead in Kosovo’s Rugova Valley, it was an occasion for celebration. The grandmother invited us to drink “mountain tea” under a tarp layered with drying herbs. The younger generation, teenagers dressed in brand-name clothing, invited us to join in on their daily volleyball game — after the dogs brought the sheep home, of course. But with the exception of families living off the land, the rugged Accursed Mountains remain wild.

Montenegro and Kosovo have both set aside significant portions of their land as national parks and Albania works to protect its golden eagles. In Montenegro’s Prokletije National Park, you’ll find some of the largest Eurasian brown bear populations on the continent. The trail also covers regions with the highest concentration of rare plants, like the alpine edelweiss. A Swiss member of my hiking group spotted his national flower near the summit of Mount Hajla. It was the first time he’d ever seen edelweiss in person. Moving through the heart of the mountains with no development in sight, it’s hard to believe you’re still in Europe.

Guesthouses make it a richer experience. 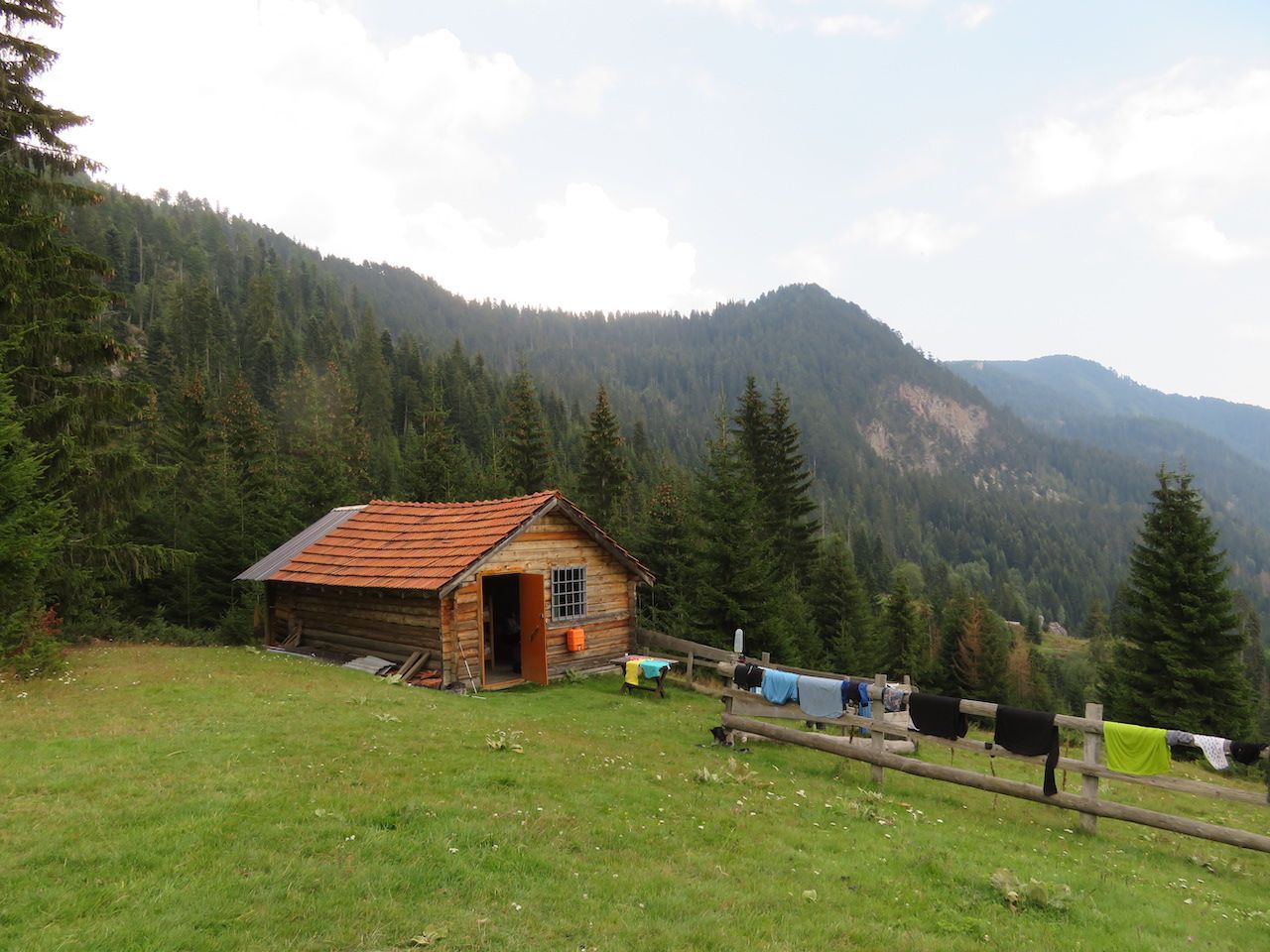 If you want to haul in your supplies and camp along the trail, there are plenty of beautiful valleys to pitch a tent in. But you’d be missing one of the best parts of the trail: meeting families living in the mountains. Usually run by one extended family, the guesthouses offer hikers an opportunity to witness life in the rural Balkans, even if there is a range in comfort levels. I tossed and turned trying to stay warm in a stone shepherd’s hut in Doberdol, Albania, but my lasting memory of the village will be watching the young men build a new stone home using only basic tools and the weight of stones they pulled from the river.

In Kosovo, I slept in a 100-year-old family home built by hand and played tag with the host’s children. Most evenings I feasted at family tables on creamy stuffed peppers, homemade börek (a savory pastry), freshly plucked grapes, and day-old sheep’s cheese. These intimate settings often led toasts of strong raki liquor and local stories of blood feuds, legends, and struggles for independence.

Staying at guesthouses is not just a highlight of the POB. It also provides support to the local economy. “Many local people who had previously left their land due to unemployment and lack of economic possibilities, have recently returned and invested their time and energies on Peaks of the Balkans tourism,” said Mend Zavalani, a veteran POB guide. The trail, he said, “has brought a big positive impact in the region.” 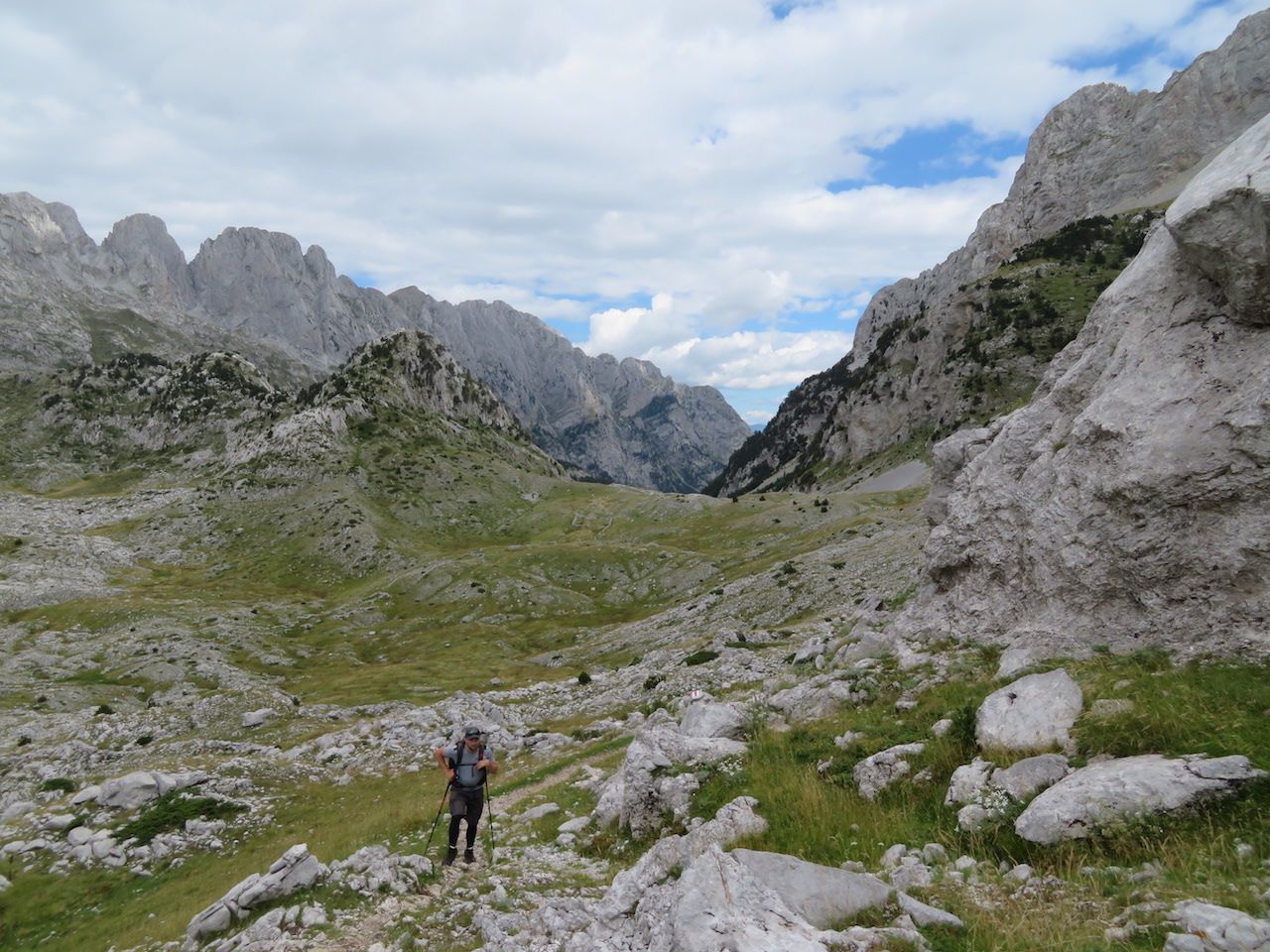 Peaks of the Balkans is not a cake walk. Most people complete the full circuit through all three countries in 10 to 13 days, but each leg includes a significant ascent and descent. The peaks of Trekufiri, Hajla, Taljanka all measure more than 6,500 feet high. My guides also included an optional climb to Mount Arapi, which features a long, steep scrambling section.

For me, Arapi was a challenge. The last push to the top tested my fear of heights — and of falling into a crevasse. Near the summit, a fog rolled in while I struggled to stay upright and I heard my guide mutter, “Oh shit.” This vote of confidence turned me off Arapi. About five yards from the tippy top, I found a flat surface just large enough for one person to stand on and stopped. The rest of my group went on, took their summit photos, and I rejoined them on the way down. Now, I can boast that I almost fell off a mountain and died in Albania.

If you’re looking for a relaxed walking holiday, the Peak of the Balkans probably isn’t your trail, but if you want to test yourself and try something more challenging, the Accursed Mountains are the place to go.

It’s a trek through a complex history. 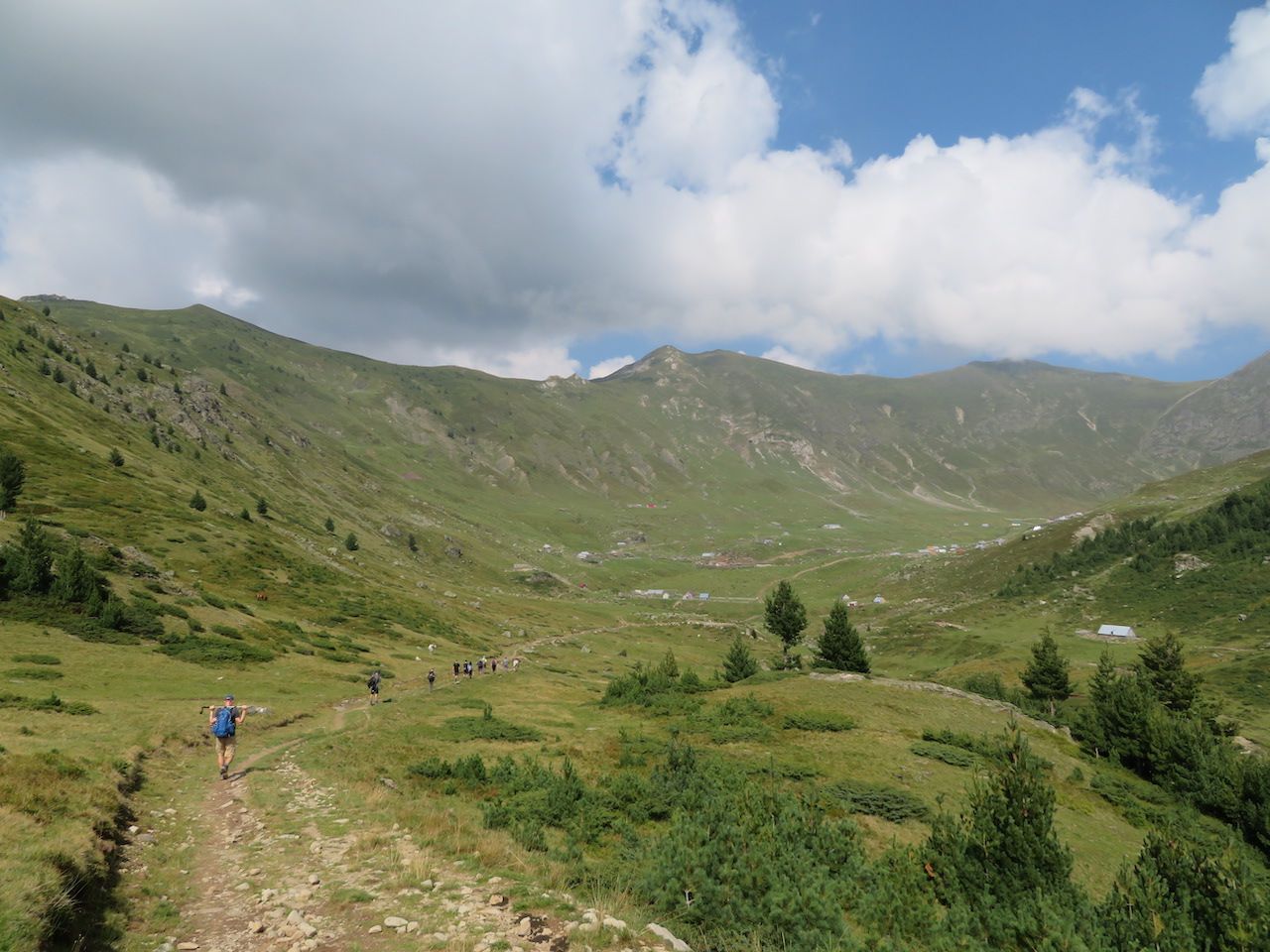 For most hikers, Mend Zavalani noted, “Realizing that the idyllic landscape was a battlefield just two decades ago” is difficult. But 20 years ago, hiking around the disputed borders of Kosovo, Albania, and Montenegro would have been life-threatening. Political instability triggered by the collapse of Yugoslavia in 1992 eventually led to the Kosovo War of 1998. Outbreaks of ethnic violence continued to occur into the early 2000s as Montenegro and Kosovo declared their independence from Serbia in 2006 and 2008.

Today, the former adversaries maintain a hard-earned peace. “Life,” said Zavalani, “has found its equilibrium,” but you’ll encounter remnants of the recent conflicts on the trail like monuments to fallen soldiers and deserted bunkers. Any adult you meet will have their own personal story to share. Traveling slowly through the complex region gives you time to take in the history.

How to plan before you go

The path is well marked in most sections, but hiring a guide gives you an interpreter who can help arrange guesthouses and also supports the local economy. When I first started researching the hike, I wanted to go it alone. It only took me a single day with my guides to realize that would have made everything much more difficult. If you have a GPS and truly want to attempt the trail alone, be prepared to carry your supplies — as there are few shops along the main trail. There is also very little cell phone service to call for help in case of an emergency. A solo POB hike should only be attempted by experienced hikers with backcountry knowledge.

I used the Zbulo guiding service and booked my trip online a couple of months in advance. The guides at Zbulo helped mark the original trail and were early supporters of the project, but there are other options available online.

National ParksWhy the Alps You Need To Visit Are Actually in Eastern Europe
Tagged
Backpacking Hiking Europe
What did you think of this story?
Meh
Good
Awesome