Illegal liquor is a lot like a good hole in the wall restaurant. No matter where you’re at, you can find it if you know the right people to ask.

Moonshine, as it’s known in the US, has a storied history as the liquid that changed the hills of Appalachia, built fortunes for Prohibition-era mobsters like Al Capone, and made a star out of Popcorn Sutton. It’s far from a stateside phenomenon, though. The tradition of fermenting and distilling whatever grain, sugar, or fruit is cheaply available has been happening around the world for basically as long as people have had the know how to do so.

The appeal for moonshine makers and drinkers is primarily price. Since it’s untaxed, it can be just a fraction of the cost of a bottle of alcohol purchased at a liquor store. However, also since it’s untaxed, it’s unregulated and can be improperly made or even laced with poisons. Still, it’s easy enough to find on your travels depending on where you go.

Unregulated liquor is about as much bound by borders as it is bound by the law. Which is to say, not at all. Many countries in the Balkans use some form of the word raki to describe their moonshine while a number of countries in Southeast Asia use the word arrack. Regardless of name, each region has its own slight variation on moonshining. From Ireland to Haiti and everywhere in between, these are the most famous moonshines made around the world you need to try — if you think you’re up for the challenge.

Like Italian grappa, raki is made with the solid fermenting skins, seeds, and stems of grapes after they’re pressed to make wine. Often it’s made with other fruits available in the area, like plums, pears, apples, and peaches. Sometimes it’s a mix of all of the above, but you’ll rarely know unless you ask. The taste varies by who makes it, but it loses the vast majority of the taste of the fruit its made from in the distillation process. The one rakia taste you’ll always pick up is a strong alcohol burn although spices or honey is sometimes used to cover that up. It’s served in small shot glasses and consumed in one go, often with food and always with other people.

Some of the places you can find raki are Albania, Bosnia and Herzegovina, Croatia, and Bulgaria. Sellers peddle their spirits on the street, encouraging the homemade status of their bottles of (mostly) clear liquor. It’s also found on store shelves with handwritten labels, but locals stick to the stuff they make at home or get from their neighbor. 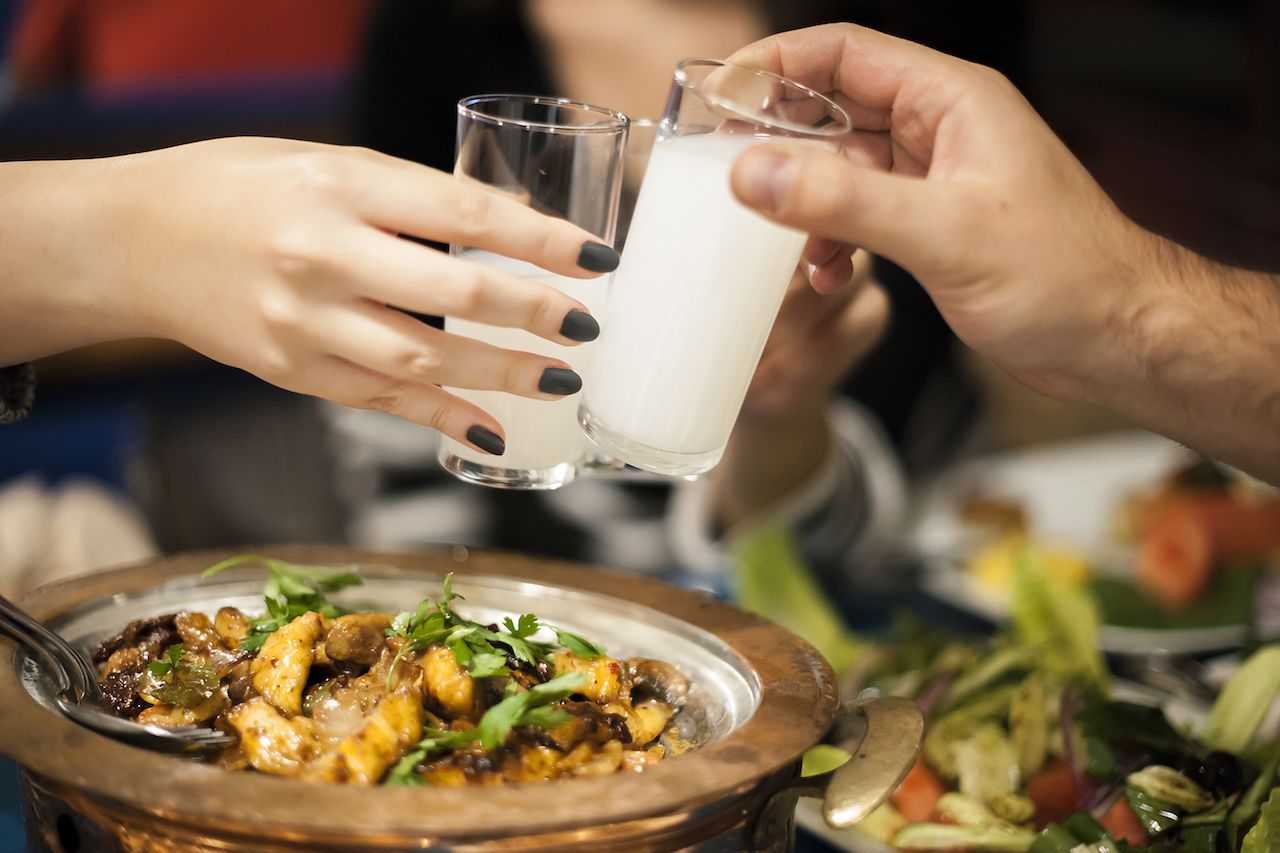 Yes, it has the same name as the raki above, but Turkish raki deserves a special mention. It’s more consistent than in the Balkans in that it’s always flavored with anise, giving it a similar taste to ouzo from Greece or pastis and absinthe from France. It’s earned a reputation as Turkey’s national drink and also goes by the name Lion’s Milk thanks to the opaque white color the spirit turns when a bit of water is added.

In Mexico, there’s a saying that goes por todo mal, mezcal, y por todo bien, tambien, which loosely translates to “for everything bad, there’s mezcal, and for everything good, there’s also mezcal.” The same goes for raki in Turkey. It opens up conversations when someone is feeling down and leads to dancing on tables during celebrations.

Raki is most often drunk in a chilled glass and is diluted with cold water. It has a strong anise flavor, and it’s always enjoyed with company during drinking sessions that can go all night. Letting all those drinks get to you is frowned upon, though, despite its strength. Thankfully, you’ll always find small plates of food on the table alongside the alcohol. Be sure to clink the bottom of your glass when you cheers — clinking the top means you think you’re better than the other person.

Clairin is the traditional name for Haiti’s local rum-like spirit. It’s made from fresh sugar cane juice, unlike rum, which is most often made from molasses. The exact process and types of stills used vary from community to community, but it’s funkier than rum and has a sweet vegetal note to it. Each distiller uses whatever variety of sugar cane is nearby, and wild yeast ferments the pressed juice.

According to a company called Clairin that recently started exporting the drink to the US, there are more than 500 community-run stills in Haiti making local versions of clairin (exact numbers are hard to come by since it’s not government regulated). No single distiller makes enough to have any sort of dominance in the local clairin market, but it’s easy enough to find the hyperlocal spirit in clear plastic bottles. Thanks to the community-maker aspect, clairin has a real sense of place connected to the part of the island it’s made in.

Pronounced puh-cheen, this Irish moonshine is the country’s true regional spirit. It’s made from whatever is available, which, depending on the area, can mean potatoes, barley, or sugar beets. The taste is influenced by whatever it’s made from but is often a touch sweet. The name comes from the traditional word for “small pot” in reference to the home-sized stills that true poitin is made in. Home distillation was pushed underground when it was outlawed by King Charles II in 1661 to keep distillers from tax evasion, and the all-out ban on the spirit category wasn’t corrected until 1997.

Irish whiskey stole the spotlight for much of the country’s long and illustrious distilling history, but clear, unaged poitin is starting to make a comeback thanks to a few moonshine-gone-legit companies selling bottles in the states, like Mad March Hare, Straw Boys Poitin, and Glendalough. 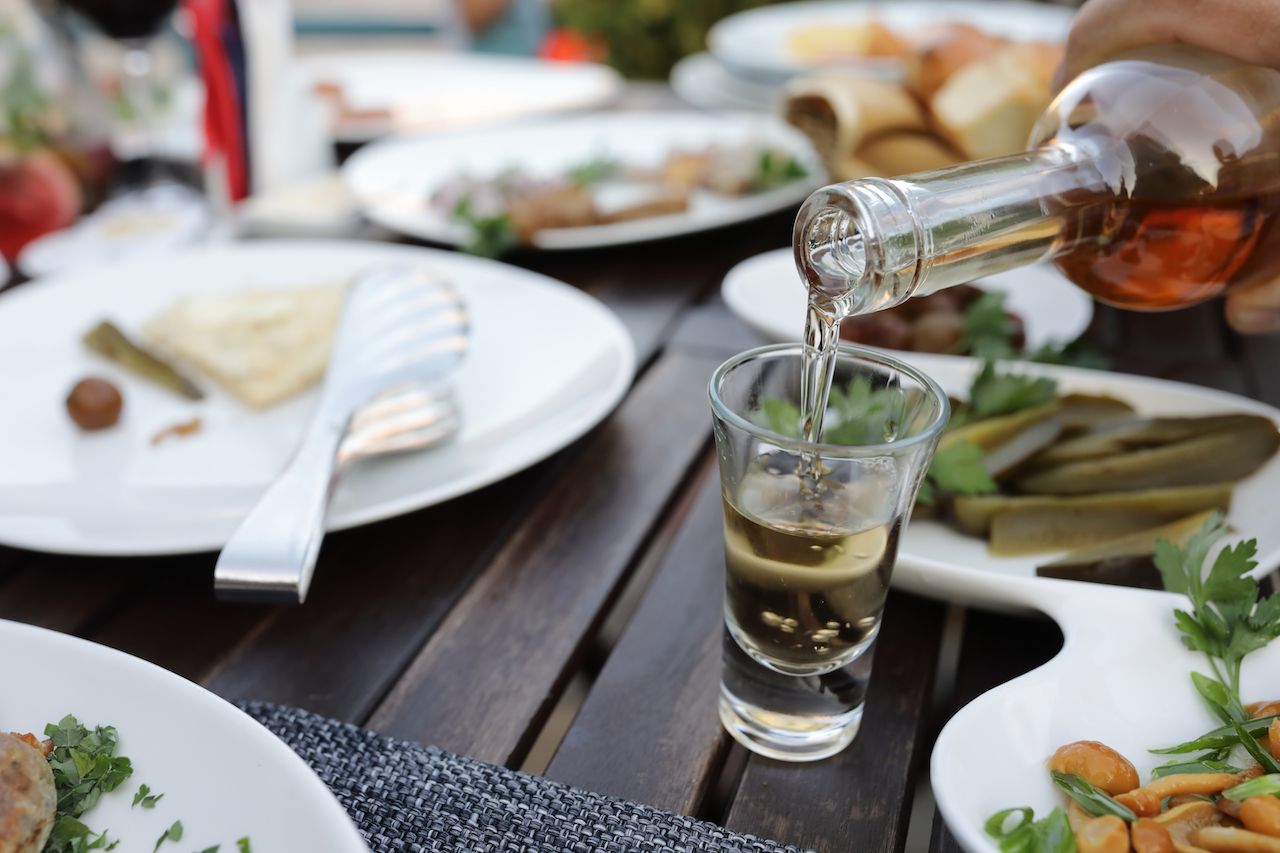 The country of Georgia may be known for being one of the oldest wine regions in the world, but the drink of the people is chacha. The fiery spirit is similar to raki and Italian grappa in that it’s made with the grape pomace leftover from winemaking, and it’s often high in alcohol and unrefined.

You don’t need to visit any type of speakeasy to get a taste of chacha; all you need to do is step into the country. It’s given to visitors by locals eager to share their traditions and culture, and it’s served at pretty much every bar and restaurant, where small shots poured from unmarked bottles are passed around. More often than not these bottles come from a local distiller rather than any government-regulated industry. A toastmaster leads the drinking during meals, and it’s considered rude to not partake — regardless of how many toasts the leader wants to make.

Arrack was once a catch-all term for spirits from Southeast Asia, but the word has been refined down to referring primarily to a distilled beverage made from coconut palm sap or sugar. By some accounts, it’s the oldest spirit in the world, and it was the base spirit for punches and cocktails when sailors passed through modern-day India, Sri Lanka, and Indonesia (where it’s often spelled arak) during the Age of Exploration. Colonization and subsequent taxation pushed arrack to the fringes of the black market, and it further solidified its position as a homemade spirit after World War II.

It’s impossible to ignore how big of an impact arrack had on the way people drink liquor today. It was more than likely the ingredient used in the first punches and cocktails before it was replaced by the more readily available rum. Unregulated arrack is cheap and easy to find, but it’s often cut with poisons, and it’s a gamble if you don’t know your source.