With 4,500 miles of Pacific coastline, Mexico is packed with excellent surf spots — with every type of wave and very different vibes at each surf location. You can camp on the beach in Cabo or glam it up at a waterfront villa in Punta Mita. You can be far from the nearest anything in Saladita or strolling through a boho chic village in Sayulita. Anywhere you go, a mix of surf breaks means both beginners and experts will find a wave suited to their skill level. Here are the top surf locales south of the border. 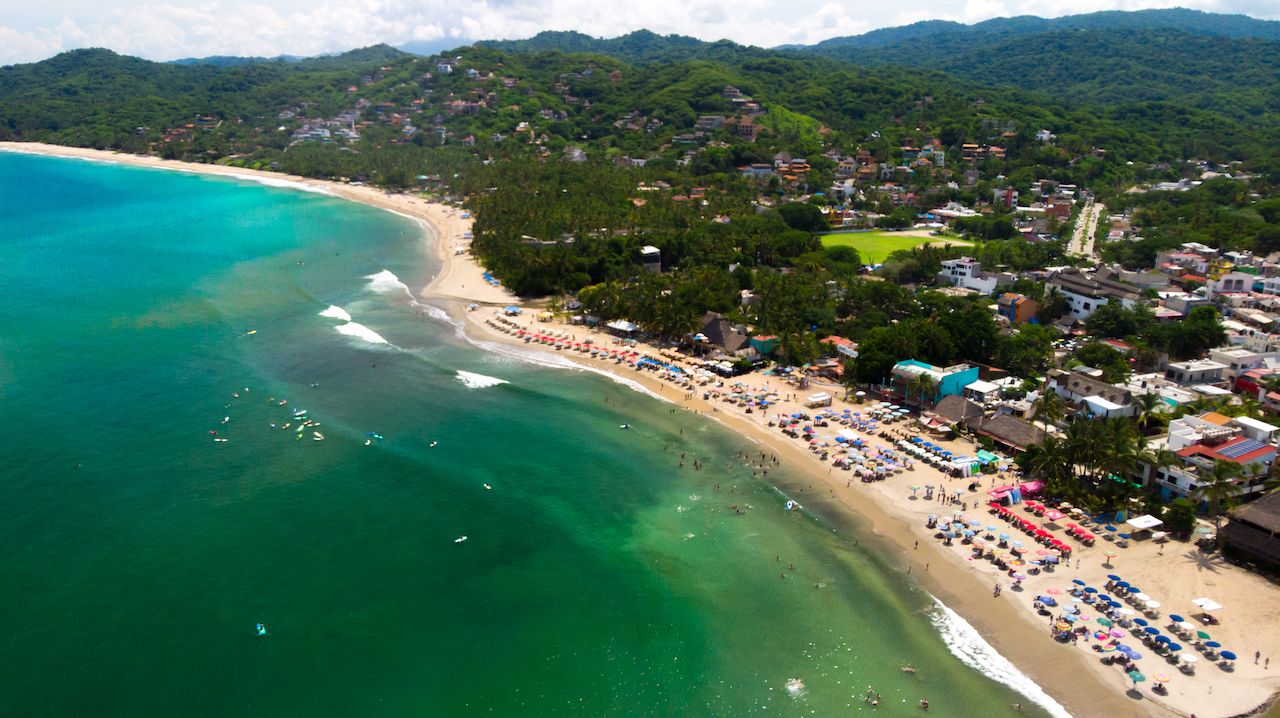 Sayulita — located in Nayarit, about an hour’s drive from Puerto Vallarta — has been a surfer mecca for several years. It combines excellent surf conditions with probably the most charming town of the bunch. The wave directly in front of the town is a slow-forming, gentle roller that’s perfect for beginners and longboarders. North of town by San Pancho, you’ll find a fast wave carved up by more experienced surfers.

On land, Sayulita offers multiples lodging options, from the Villa Amor hotel, with its thatched roof cabanas built into the hillside, and low-key beachfront houses for rent. There are also the Aurinko Bungalows owned by a Finnish transplant, who also owns the Sininen surf shop. Then there’s the impossibly hip Pachamama boutique owned by a French family, whose members also include several competitive surfers. 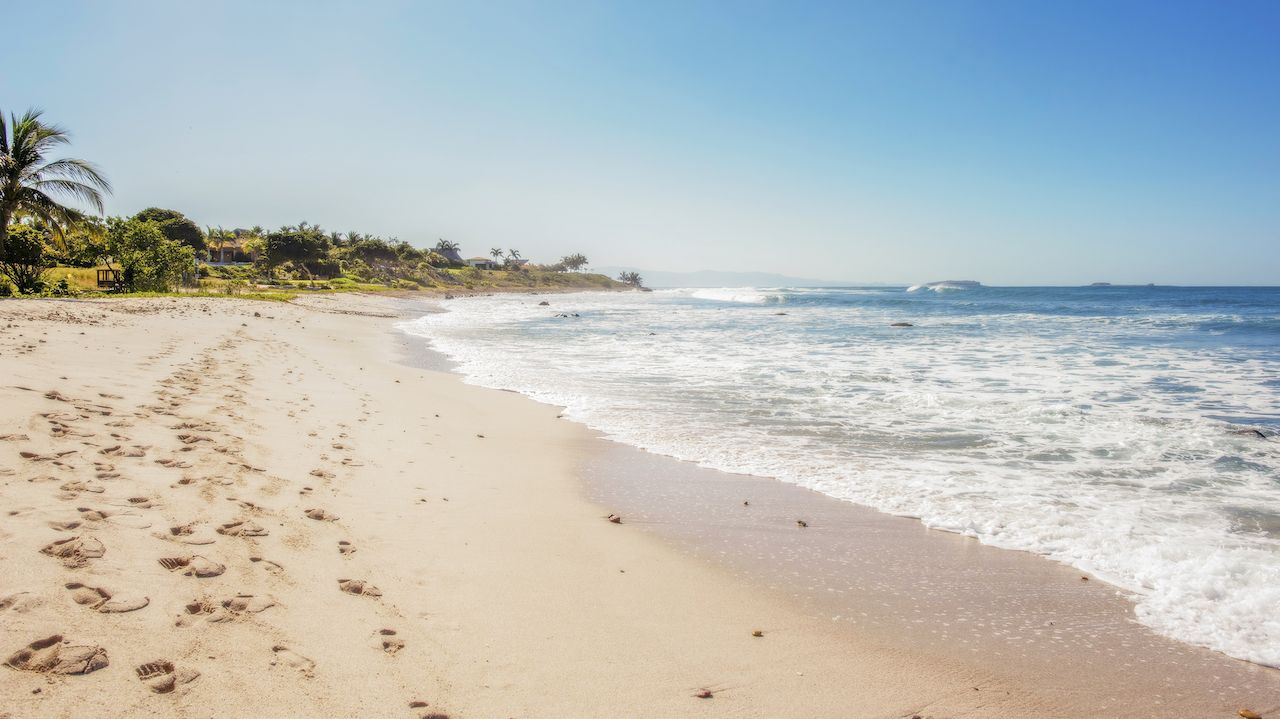 If you want more luxury than you’ll find in Sayulita, then Punta Mita, a one-hour drive south, may be the place for you. You don’t have to go all out and stay at the Four Seasons in Punta Mita. You could also rent a waterfront villa looking out over the pearly clean sand and surf out at La Lancha, a reef break with a wave that goes on forever and is favored by longboarders. Alternatively, you’ll find a more peaky, faster waves at The Cove. You could paddle out to these breaks, or hire a panga — a small boat — to take you out to where the waves are breaking. 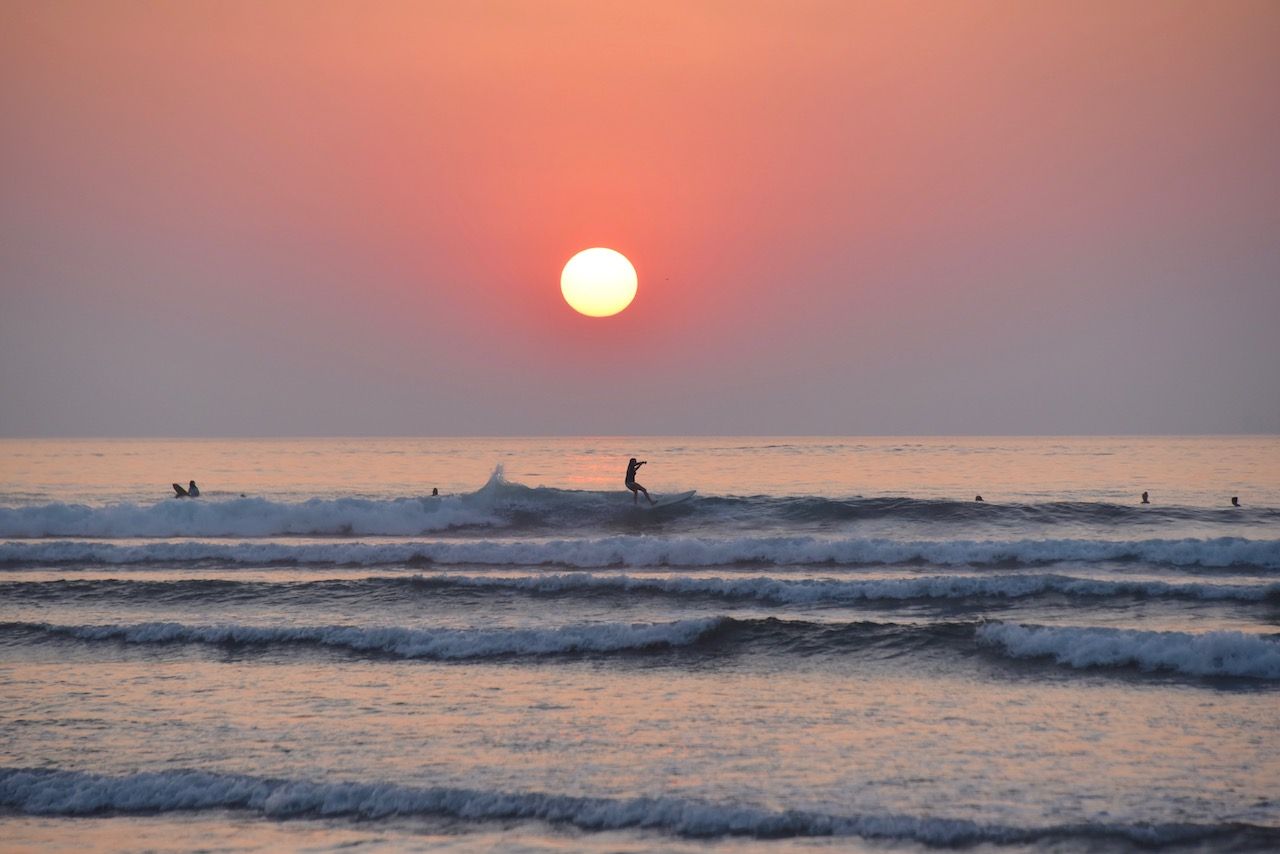 Saladita is often confused with Sayulita, as it’s flown below the radar for many years — but that’s rapidly changing. Located north of Zihuatanejo in the southern state of Guerrero, Saladita is hard to find on a map. The nearest town is Troncones; but you can find Punta Saladita if you type in Lourdes Bar & Grill into Google Maps.

There’s little development here, save a few of the houses that foreigners (mostly Americans) started building here about twenty years ago. Before that the only surfers were locals who would come up from “Zihua” and access the beach with machetes. Lourdes was the first place to rent out rooms. It also serves passable food and cold beer, the real draw being the dive bar’s incredible location right in front of the wave known as Ubilam. That’s Malibu spelled backward, as it’s a long, luscious break that you can ride for over a minute — but this one is a left-hander.

The wave is a longboarder’s dream, and the secret has gotten out. This year saw the third annual Mexi Log Fest, a very festive longboard competition, and Lourdes is now a much hipper looking bar with new owners. If you like a wave with a bit more oomph, but you still want to explore this still low-key and incredibly affordable part of Mexico, head due north to El Rancho, an amazing left-hander that gets a lot more size than the wave right in at Punta Saladita; or hire a boat to take you to Palo Alto, where you’ll find some zippy lefts. 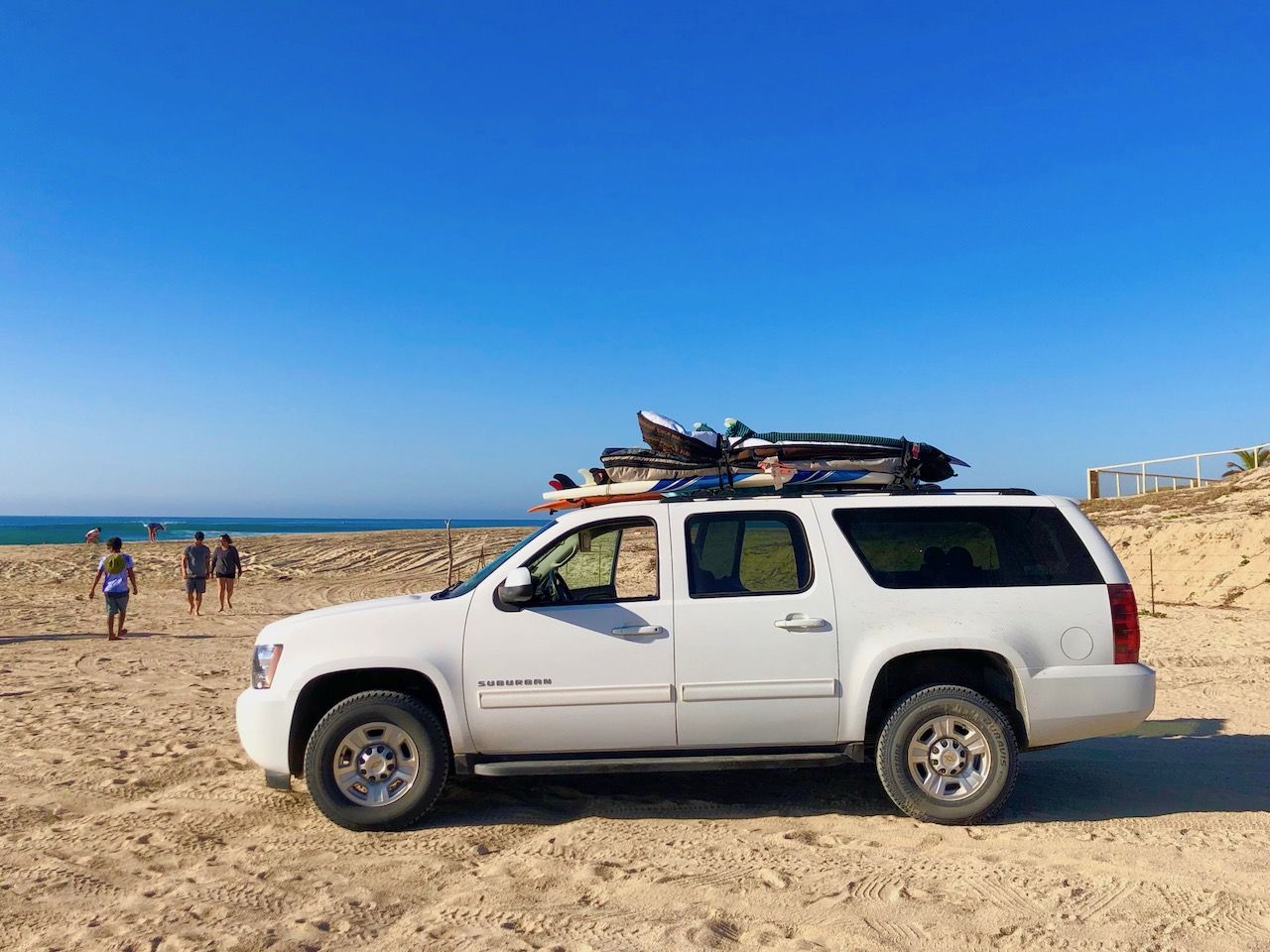 From either Cabo San Lucas or San Jose del Cabo — or directly from the airport servicing both cities, which lie at the bottom of the Baja California peninsula — you can drive toward the western or eastern side of said peninsula. The eastern side only works on a south swell, from May through August. During those months, though, the mostly right-handers at spots like Shipwreck and Nine Palms are glorious — so much so that hardcore surfer families will pilgrimage south of the border in RVs and camper vans and park themselves on the beach here for weeks at a time.

You could also bring your camping gear by plane and rent a car upon arrival. Set up a tent and a campfire on the beach. Keep it simple and have quesadillas for dinner, washed down with some cold beer. The advantage of a lousy night’s sleep in the tent is that you can be in the water by 6:00 AM and get in a glorious hour before most other surfers, and two hours before any wind picks up. If you’re feeling extra adventurous, the surf breaks continue on up the coast to spots like El Rincón and Punta Arenas. 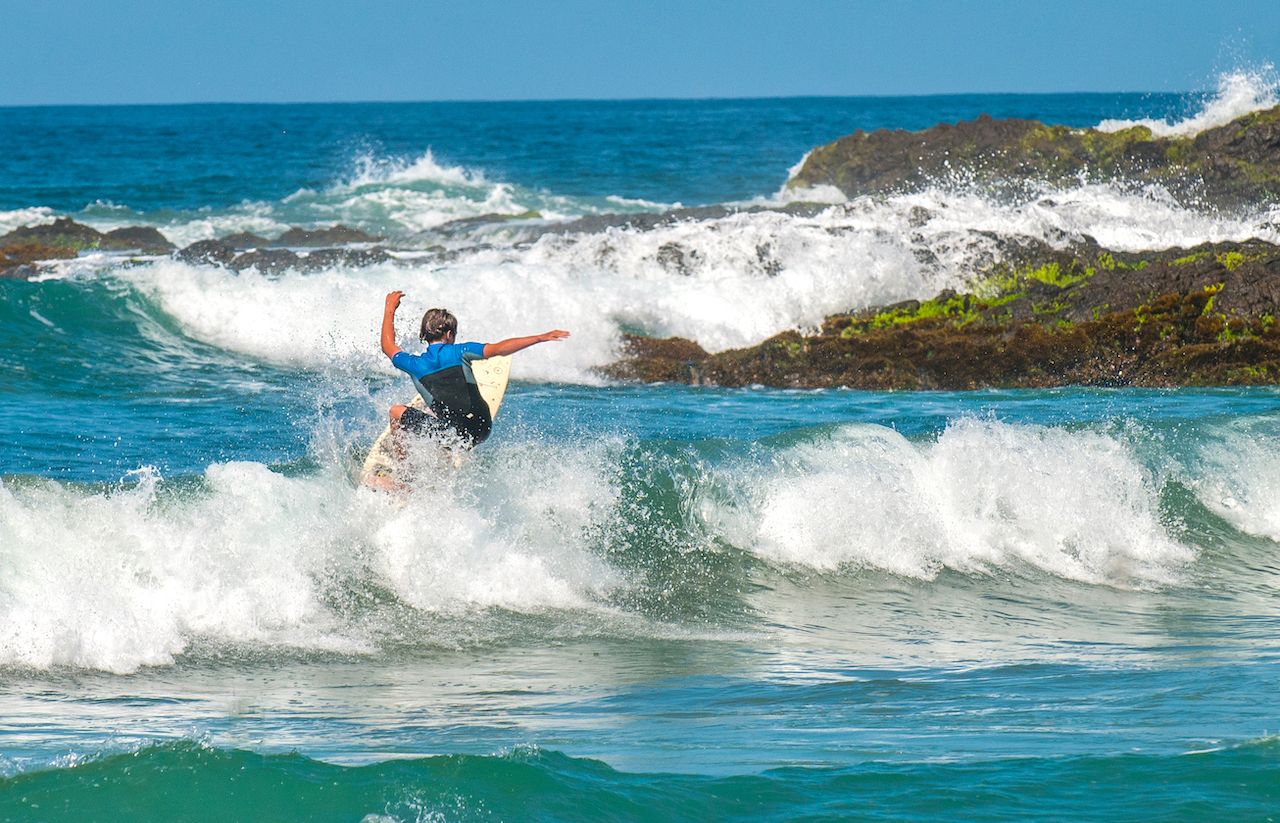 On the Pacific coast, the waves break all year, as they can get all the swells that come their way. Wind can be the tricky factor here. About 45 minutes from the city you’ll hit Cerritos, where the swells come up against and large knoll in the sea and make a consistent right that’s always working — but that can be too much for novice surfers. Accommodations in Cerritos include Cerritos Beach Club and the swankier Hacienda Cerritos.

Just up the coast from Cerritos you’ll find San Pedrito, an often better break at a river mouth. Further north still is Todos Santos. Despite being home to a wave called Killers, which is a legitimately terrifying big wave, Todos Santos offers plenty of surf spots perfect for beginners. Baja Surf Yoga even hosts a women’s surf and yoga retreat at Todos Santos, many of whose participants are novice surfers. 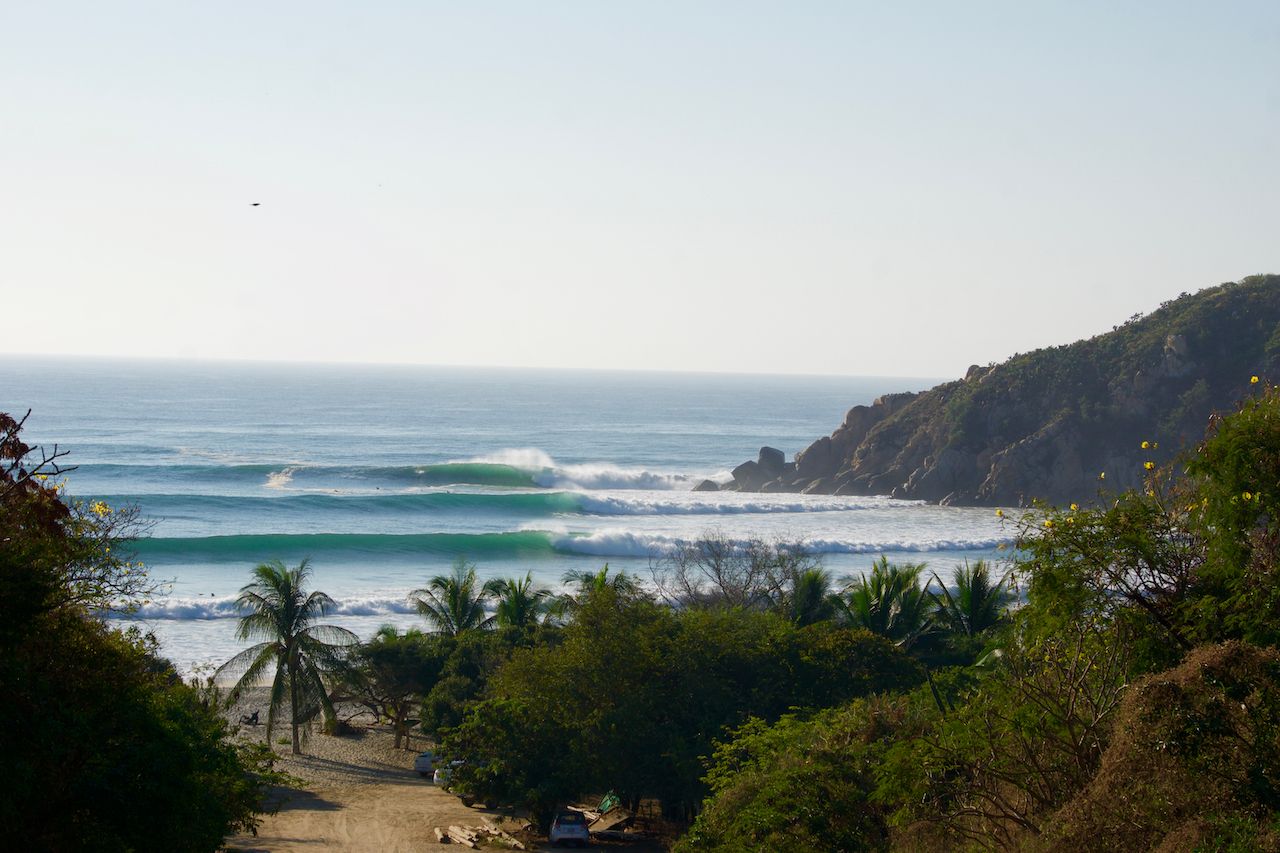 In the state of Oaxaca, the south-facing surf spot of Barra de la Cruz and Salina Cruz are some of the best surfing in the entire country — offering up hollow right-handers coveted by the continent’s best surfers. Due east of La Barra is Salina Cruz, where Punta Conejo offers another consistent right-hander. The town itself is fairly industrial, but you’re not far from tropical beaches, and the buzz around Punta Conejo has been seen a proliferation of new surf schools in the area.

The real danger now is that the governor of Oaxaca has signed onto a deal to expand the region’s port area and connect Mexico’s Pacific and Caribbean coasts here, the narrowest isthmus in Mexico. According to a report by Surfline, the project will destroy the wave at Punta Conejo and many other surfable breaks in the Salina Cruz area. The environmental impact may be devastating as well. If you’re a surfer who cares about the environment and doesn’t want to see a truly epic wave be lost to poorly thought out industrial plans, go to Salina Cruz, surf this incredible wave, and make your voice heard.

SurfingRaglan, New Zealand, Is the Coolest Surf Town You’ve Never Heard Of
Tagged
Beaches and Islands Surfing Insider Guides
What did you think of this story?
Meh
Good
Awesome