“What if the freedom riders had just decided to boycott Alabama instead?” Wade Preston wonders aloud from Prevail Union, his coffee shop on Dexter Avenue in Montgomery, Alabama. “What if they just ran the other way instead of straight into the hurricane? They saw a moral wrong and instead of canceling the state of Alabama, they ran to the state to be a part of changing it.”

Not to compare today’s leisure travelers to the group that rode integrated buses into the deeply segregated South in the summer of 1961. But when Alabama passed its controversial abortion ban in May, The New Yorker satirically quipped the Senate had voted to “virtually eliminate tourism to Alabama,” and it seemed blue state America was primed to stage an all-out boycott on visiting the Heart of Dixie.

That “vote with your travel dollars” mindset might make sense as a knee-jerk reaction. But delving a little deeper into what Alabama is, and the movements that grew from this sometimes-troubled state, can do a lot more for one’s cause than staying away.

Because if there’s one place to learn how true change is harder than social media posts, it’s where Martin Luther King, Jr. and Rosa Parks did their finest work. As repulsive as Alabama’s politics are to some, its history of activism is equally as admirable. And boycotting the state does nothing to help the Alabamians trying to continue that legacy.

“We’re not Disneyland…we’re here to make you think.” 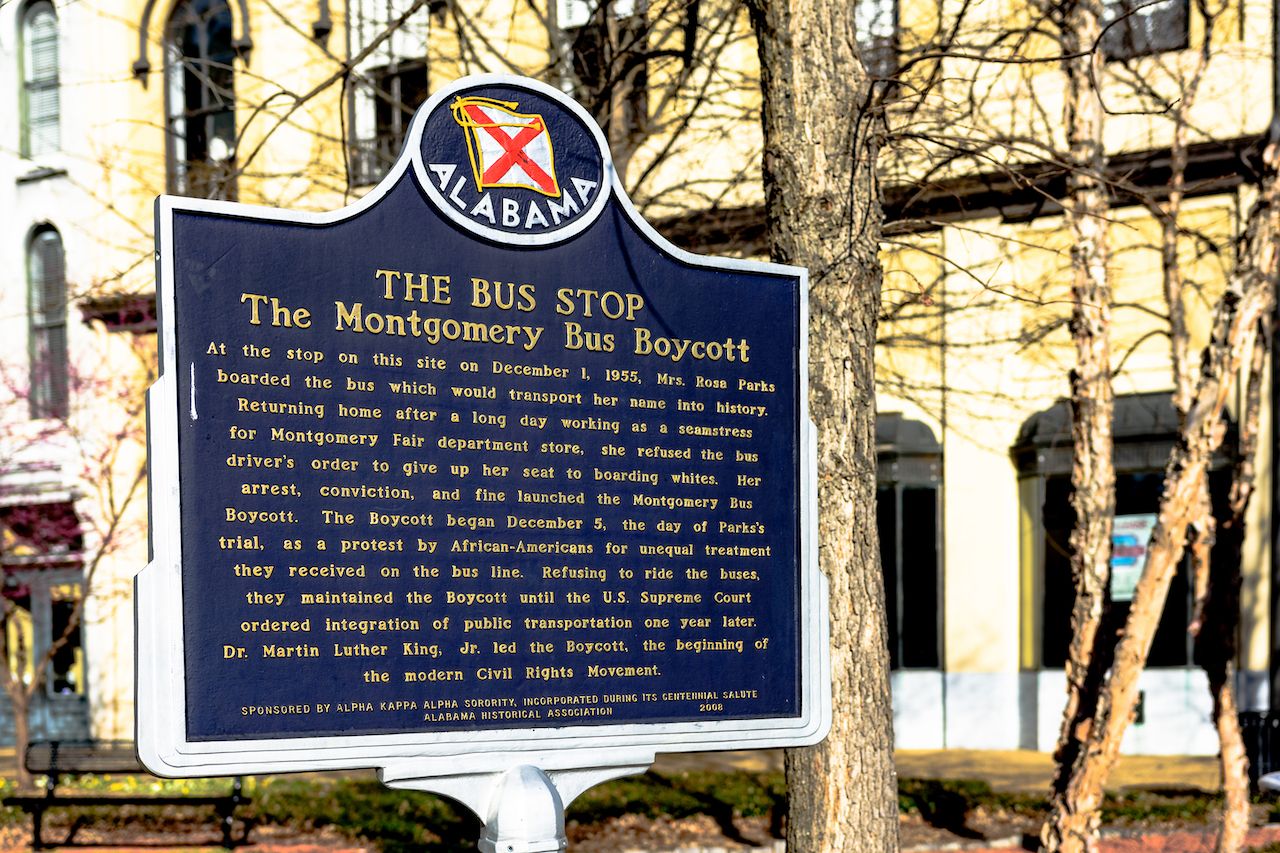 “Alabama was, in a sense, ground zero for a lot of the change that was neccesary, to come about [in the 1960s],” says Randall Marshall, executive director of the American Civil Liberties Union in Alabama and the man behind the lawsuit against Alabama’s abortion ban. “There’s so much to learn about human rights and the struggle in Alabama.”

That struggle, and the lessons we can learn from it, are on grand display in the state’s capital city of Montgomery. There, you’ll find the bus stop where Rosa Parks boarded her famous bus in 1955. Across the street from the stop sits the building where the Confederacy sent the telegram to attack Fort Sumter, starting the Civil War. That building looks out on Courthouse Square, which was a slave market in the 1800s.

On the opposite end of Dexter Avenue, you’ll find the Alabama State Capitol building, where both George Wallace and Dr. Martin Luther King, Jr. made famous speeches. King’s Dexter Avenue Baptist Church is about 200 feet from the Capitol’s steps. Those steps are also where Jefferson Davis was inaugurated as the first and only president of the Confederacy.

“When you can actually see the pulpit where Dr. King preached, when you can actually stand on the spot where Mrs. Parks was arrested for keeping her seat on a bus, it gives you a more profound understanding of the circumstances.” says Dr. Felicia Bell, director of Montgomery’s Rosa Parks Museum.

“We’re not Disneyland,” she continues. “We’re not here to make everybody smile and have a great time. We’re here to make you think a little bit. You might be uncomfortable and that’s okay. You should be, because we still have work to do.”

Learning tolerance in the most unlikely of places

The amount of work left to do became especially apparent during my second day in Montgomery, when Governor Kay Ivey signed the state’s controversial abortion ban into law. The steps of the Capitol were quiet; people didn’t seem to talk about it much. Most of the fervor came from my friends on the coasts who thought I was witnessing some kind of history. But the thing about Montgomery is, for the most part, people here have learned to get along.

“There does exist a place in America that is the cradle of the Confederacy and the birthplace of the civil rights movement,” Preston says. “There’s a place where those things coexist historically, and we’re not here throwing rocks at each other. We find ways to get along. Yeah, there’s tension, but there is civility and there is Southern hospitality and there is kindness, and there is common ground.”

Not that a place famous for race riots, police brutality, and steadfast segregationism should necessarily be held up as a model for buy-the-world-a-Coke harmony. But in an era where we increasingly choose to exist in social media echo chambers, traveling to a place like Alabama is the best thing you can do to try and bridge that divide.

“This is where Dr. King began,” Preston says. “And when you start to get a taste of that story, and the power that’s there, the cancel culture of boycotting things begins to melt away, and the focus becomes how can I be a part of that change, rather than insulating myself from things I don’t agree with.”

Though civil rights and reproductive rights are decidedly different struggles, they have both been championed by people in Alabama’s political minority. And those are the people who need support from the outside.

“If people are outraged — and they should be — they should come to Alabama and spend money on things that will help the good people doing good things,” says Marshall. “The Legacy Museum, the lynching memorial, visting sites in Birmingham and Selma. Those are all places your money is well spent, and helps low-income people to keep the economy robust.”

“From Enslavement to Mass Incarceration” 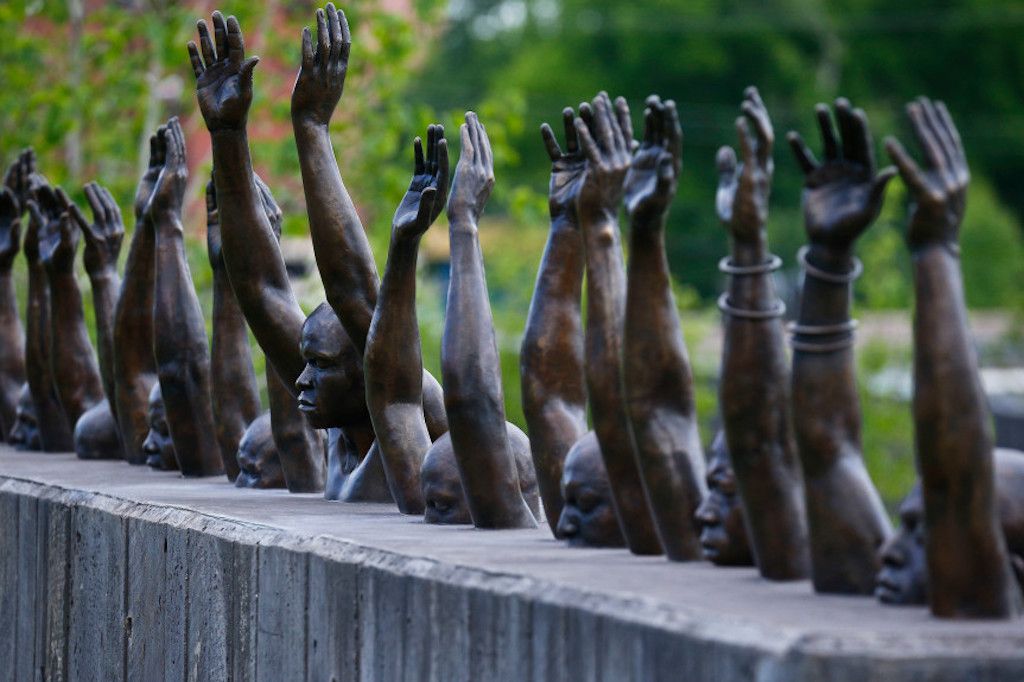 The museum and memorial Marshall is referring to is the provocative Equal Justice Initiative’s Legacy Museum and Peace and Justice Memorial, a space that hits so hard you’ll be hard-pressed to even talk about it for a couple of hours.

Its subtitle is “From Enslavement to Mass Incarceration.” It’s not subtle. Nor is it meant to be.

The museum, set in an old slave warehouse on Commerce Street, gives terrifying reality to the confines of the domestic slave trade, then moves on to graphic depictions of racial terrorism and lynchings, on to first-hand stories of inhumane conditions in American prisons.

On a green hillside not far away, the EJI’s National Memorial to Peace and Justice stands overlooking the city. It’s comprised of hundreds of hanging steel memorials, each bearing the name of an American county and all of the people reported lynched there. The numbers are staggering, and by some reports they’re not even half the victims of racial terrorism.

As Bell said, it’s not Disneyland.

The Equal Justice Initiative is trying to draw attention to exactly the kinds of issues those who are calling for Alabama boycotts want addressed. Avoiding the state does nothing to help the cause.

“I try and remind people that spirit of resistance was born here,” says Jonathan Kubakundimana, program manager at EJI. “That’s something that should bring everybody to Alabama, to bring people to that history.”

Boycotting just adds to the misery.

Warriors for social change may relish going on social media and telling everyone to stay away from the big red South. But often times people who call for such boycotts forget who those boycotts truly harm.

“The majority of women seeking abortions are low income, and disproportionally people of color,” says Marshall. “And they’re people who have jobs that are often times dependent upon the economy of the state. The more effective a boycott is, the more adversely affected are the people who are already disadvantaged. [Boycotting] doesn’t really help the people who are unduly burdened by the law, it just adds misery to the economy in Alabama.”

Staying away from parts of the country you don’t agree with is a soft fix. What’s hard is going and seeing how brutally difficult true change is, and exiting your comfortable bubble to affect it.

“A lot of people who come to visit Montgomery, while diversity might be a big value of theirs, they’ve never really been in a place that has the type of polarizing, dualistic diversity Montgomery has,” Preston concludes. “I’ll go to cities like Seattle, branded as diverse and inclusive places, and when I’m there, I don’t see a whole lot of cultural diversity. African-Americans and whites living in close proximity — that happens in the South all over the place. And we have tension, sure. But it’s easier to live in homogeny and contrive diversity, than it is to live in diversity and create community.”

Alabama isn’t a “racist shithole,” as one person commented when I posted pictures from Montgomery. It may not run as progressive as some would like, but it’s also not living in 1865. There are good people here doing good work and trying to change the world in the face of all of the stuff that causes calls for boycotts. Visiting Alabama can teach you something about how Americans in the past faced their greatest challenges, and inspire you to create similar change, ultimately making this country a better place.

A Closer Look at Marriage Equality in Alabama, Without the Conservative Sunglasses