Gathering around a fire is one of the most cherished camping rituals. But before anyone can pull out the marshmallows, someone has to build the fire — and it feels like just about everyone has their own way of getting a fire started.

Some methods are quick and painless, others fruitless and frustrating. The best are tailored to your situation. Regardless of the method, though, the first consideration should be safety, because there are times when you should forego the fire entirely.

“Make sure you are allowed to have a fire in the area you are camping in,” says Adam Edwards, an outdoorsman who writes about camping for Melanin Base Camp. “Sometimes conditions are such that land managers say no fires in hopes of preventing human started wildfires.”

Scott Elliott, the deputy chief of law enforcement and emergency services for California State Parks, says he only makes fires in established fire rings to keep the risk low — even in places that allow campfires. Just as important is to make sure you properly put the fire out.

With all safety measures considered, there are a few things to avoid no matter the starter style you choose. Damp wood, or freshly cut green wood, is harder to burn and creates a lot of smoke. Fire needs oxygen as well as fuel, so don’t suffocate your fire by adding logs that are too big too fast and blocking airflow.

Finally, there’s the method itself. We spoke to experts who have tried and tested the various ways to start a fire to find the best style for each situation.

Essentials: Paper or other tinder, lighter, and sticks
Where it’s best: Campgrounds, beaches 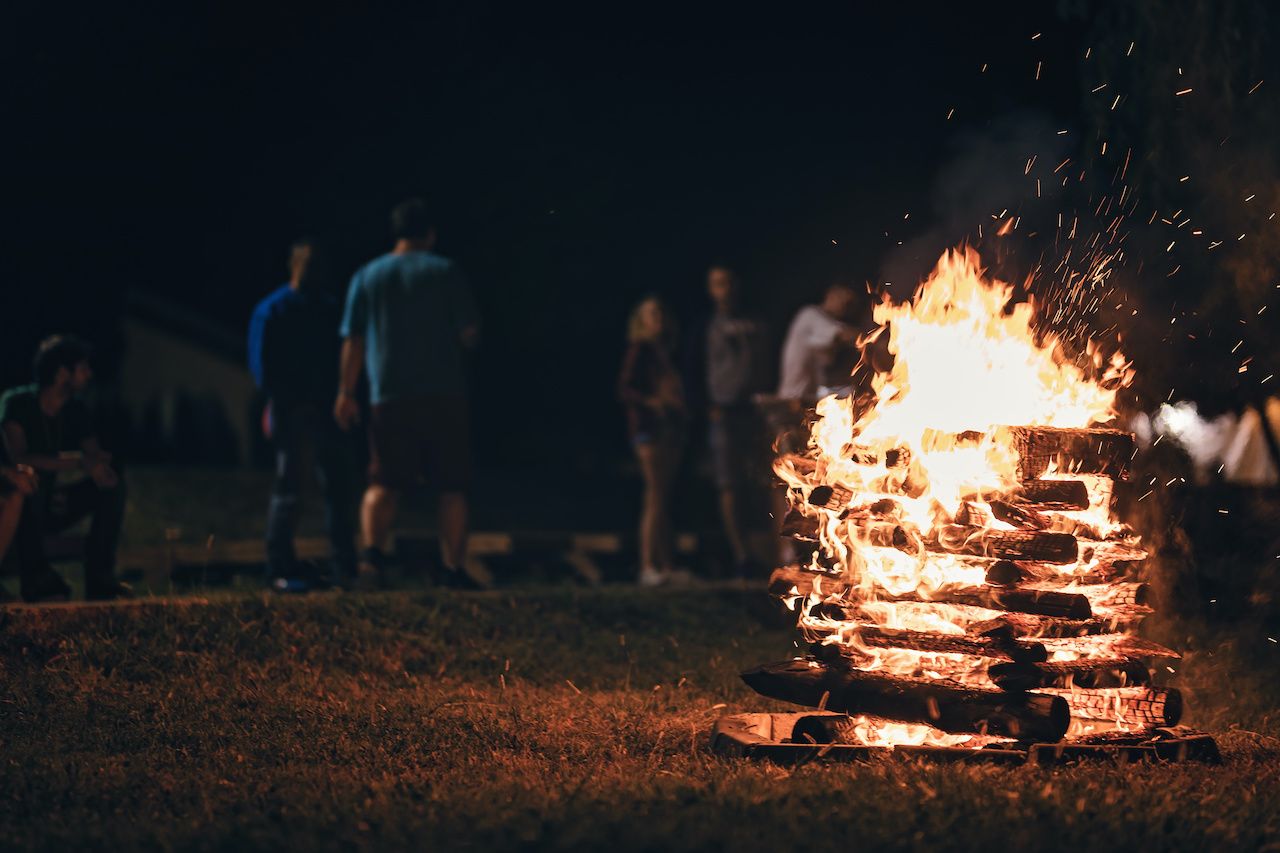 One fire design for the architecturally minded is to build a little cabin. The proper way to do this is to dig a shallow trough in your fire pit that aligns with the direction of the wind. Then, put sticks over it to make a grate to hold your tinder. The next step is to go full Lincoln logs and stack the cabin a few layers higher with kindling and small-to-medium size sticks. Put a little tinder inside, add a few more stories to the cabin, and there you have it.

The shallow hole under the tinder keeps the oxygen flowing, while the sticks quickly heat up from the tinder.

“Air circulation is critical, but also a balancing act,” Elliott says. “If it’s too windy the fire may have trouble starting. But, importantly, if it’s so windy that it’s hard to get your fire started in the campfire ring, that’s a good indication that it might not be the safest time to be having a campfire, depending on humidity and other weather factors.”

Essentials: Paper or other tinder, lighter, and sticks
Where it’s best: Campgrounds, beaches 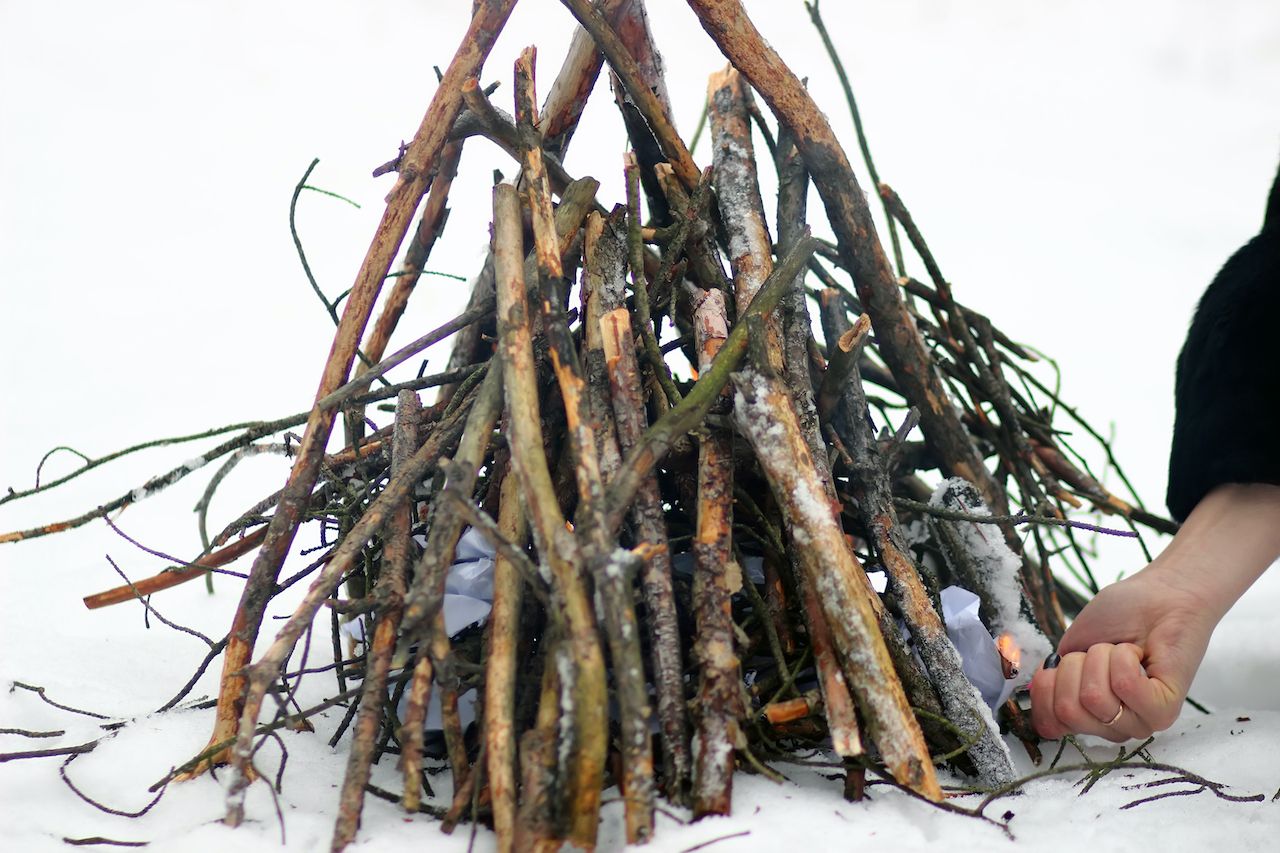 The stereotypical campfire has the wood shaped like a pitched tent. That is the teepee, which is similar to the cabin but is slightly less sturdy in the wind. It’s made by propping kindling around your tinder in a cone shape, and then propping up larger sticks around that kindling. Leave a small hole to light the tinder and let a little air in.

“The biggest mistake is that people use wood that’s too large for fuel,” Wilcox says. “You don’t want pieces that are larger than an adult forearm. If you are camping at a campground that provides firewood, they often provide large logs. If this is the case, bring some artificial wood-like Duraflame.”

While it’s quick and easy to make, the teepee will collapse on itself as it burns down, so make sure you only use this method when you have complete log roll control.

Essentials: Kindling, sticks, and either a propane blow torch or fire starters
Where it’s best: Wet and rainy areas, mountains

Edwards prefers to mix the benefits of both of the above in a teepee-cabin combo. He puts the kindling at the base and builds a teepee around it. Then, he makes a cabin around the teepee, which protects the fire against the elements more than one or the other alone.

A propane blow torch is the easiest way to get things started, but it’s not always an option. Edwards suggests keeping a lighter or matches on hand as well as a stash of a homemade firestarter made out of an egg carton filled with dryer lint and coated in wax.

Mixing both methods together means Edwards can adjust when he needs to. Whatever you do, be adaptable.

“I actually find I always modify my method based on the environment I am trying to light the fire in,” Edwards says. “Don’t limit yourself to one style, work with the tools nature provides you.”

Light, efficient fire starters can be a time saver and a space saver, and they’re ideal for when every added pound in your pack counts. Alison Watta, editor and founder of the site Exploration Solo, suggests compressed balls of wood sold at stores like REI.

“They weigh almost nothing and will burn long enough to allow your tinder to catch fire,” Watta says. “For added insurance, you can rub a bit of vaseline on them. I do this before heading out and place the vaseline coated ball in a ziploc bag.”

As soon as the starter gets going, add tinder on top and then kindling followed by logs. 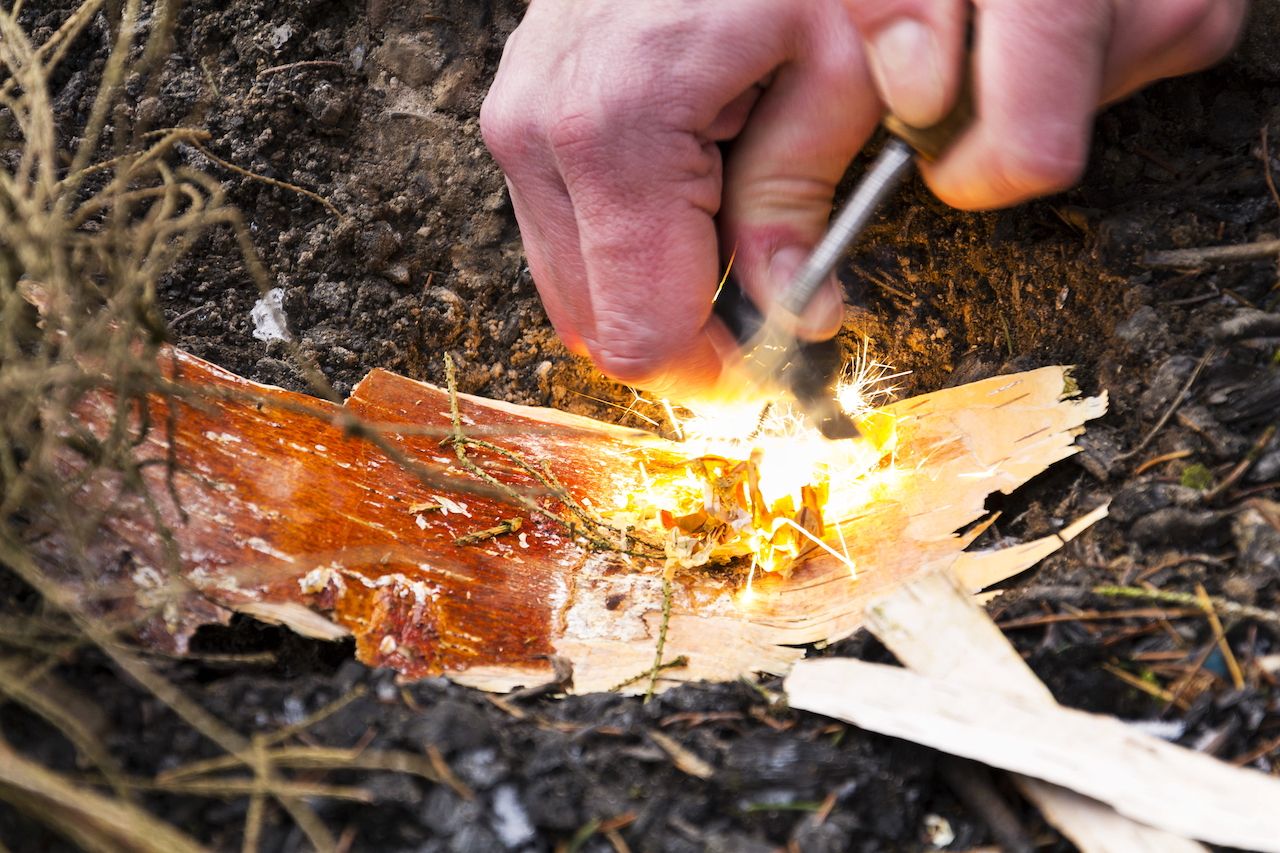 First, scrape magnesium shavings onto the dry tinder. Then all there is to do is strike the flint for some sparks. The magnesium will burn on contact and quickly light the tinder and the subsequently added kindling and logs — just be sure to take your time so as not to smother the small fire.

“It’s straightforward, easy to use, and works in damp conditions, which is fantastic whether I’m back home in Florida or up here in rainy British Columbia,” Bégin says. “Just make sure you’ve got some small pieces of dry tinder before the magnesium is going because it burns fast!”

Magnesium shavings are so helpful to keep on hand in damp situations because they can burn at more than 5,600 degrees Fahrenheit. That’s more than three times hotter than matches.

“This is an ideal method if it’s wet, windy, or your kindling just won’t catch because magnesium is highly flammable,” says Julien Heron, co-founder of the blog Outdoors Generations. “It’s also a good option if you’re in the mountains or at the beach because magnesium can help get your fire up to a high temperature without burning through excessive amounts of small twigs and sticks.”

If you don’t have the flint but do have a lighter, magnesium shavings can still be useful to get the fire started.

CampingHow To Go Camping Without Fire During Wildfire Season
Tagged
Camping
What did you think of this story?
Meh
Good
Awesome