You’ll see them on doors, houses, and even temples throughout the kingdom — extravagant artworks depicting the human penis in all its masculine glory. Some are so crudely drawn they’d be mistaken for vandalism in a less enlightened place. Others are rendered in exquisite detail, complete with hair (yes, hair), eyes (yes, eyes) and spurting white stuff (yes, that too). 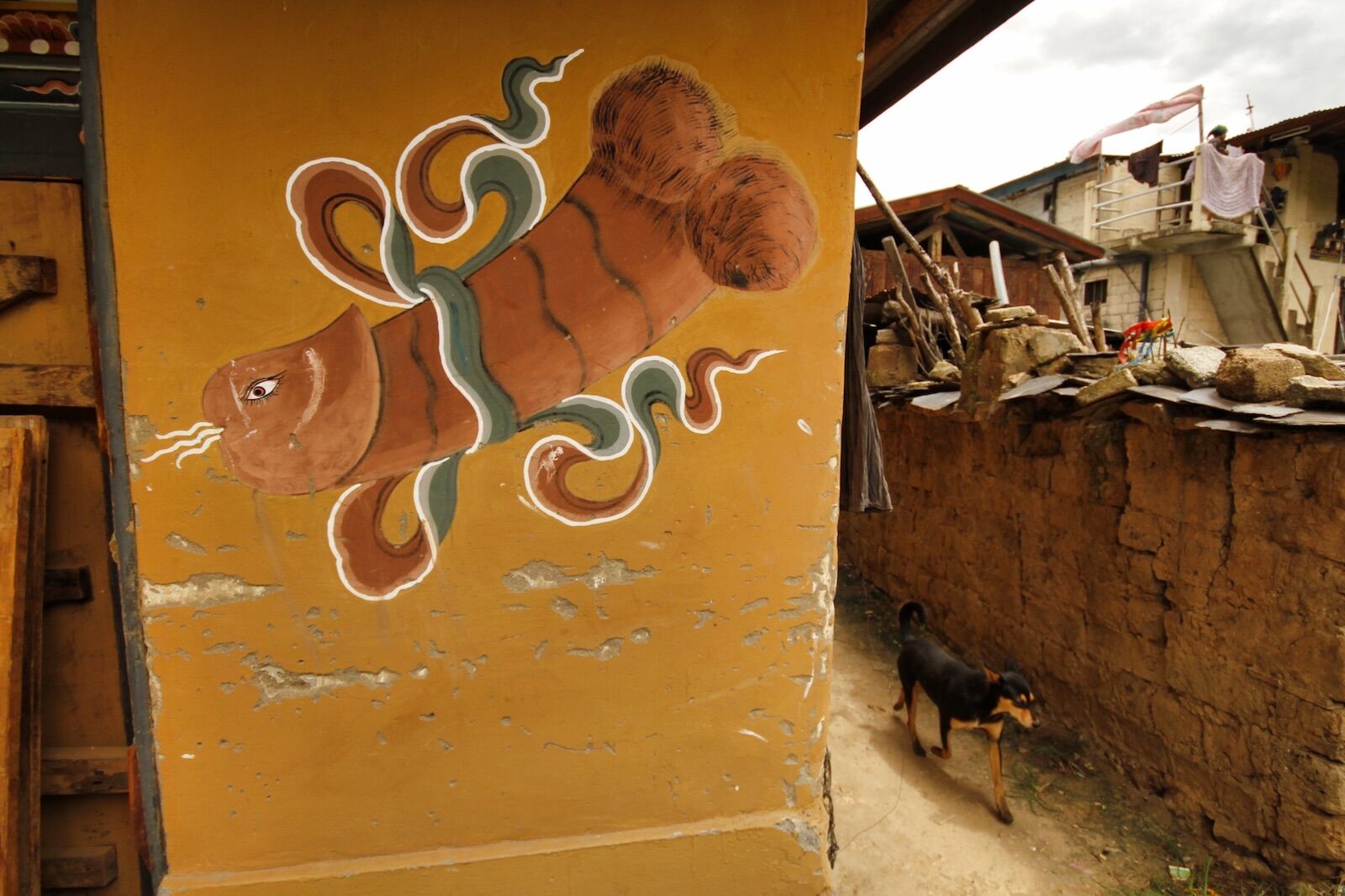 These are everyday symbols in Bhutan, a bastion of the Vajrayana branch of tantric Buddhism. Tucked amidst the jagged mountains of the Himalayas, this kingdom has for centuries lived in isolation from the rest of the world. So secluded is the nation that the Bhutanese didn’t have roads until the 1960s, and no internet connection until 1999.

Daily life in Bhutan still resembles that of centuries past, with ancient traditions and beliefs maintained to this day. Here, a monk known as the Divine Madman bestows blessings by having sex with his devotees, and phallic symbols are merely another way of expressing faith. 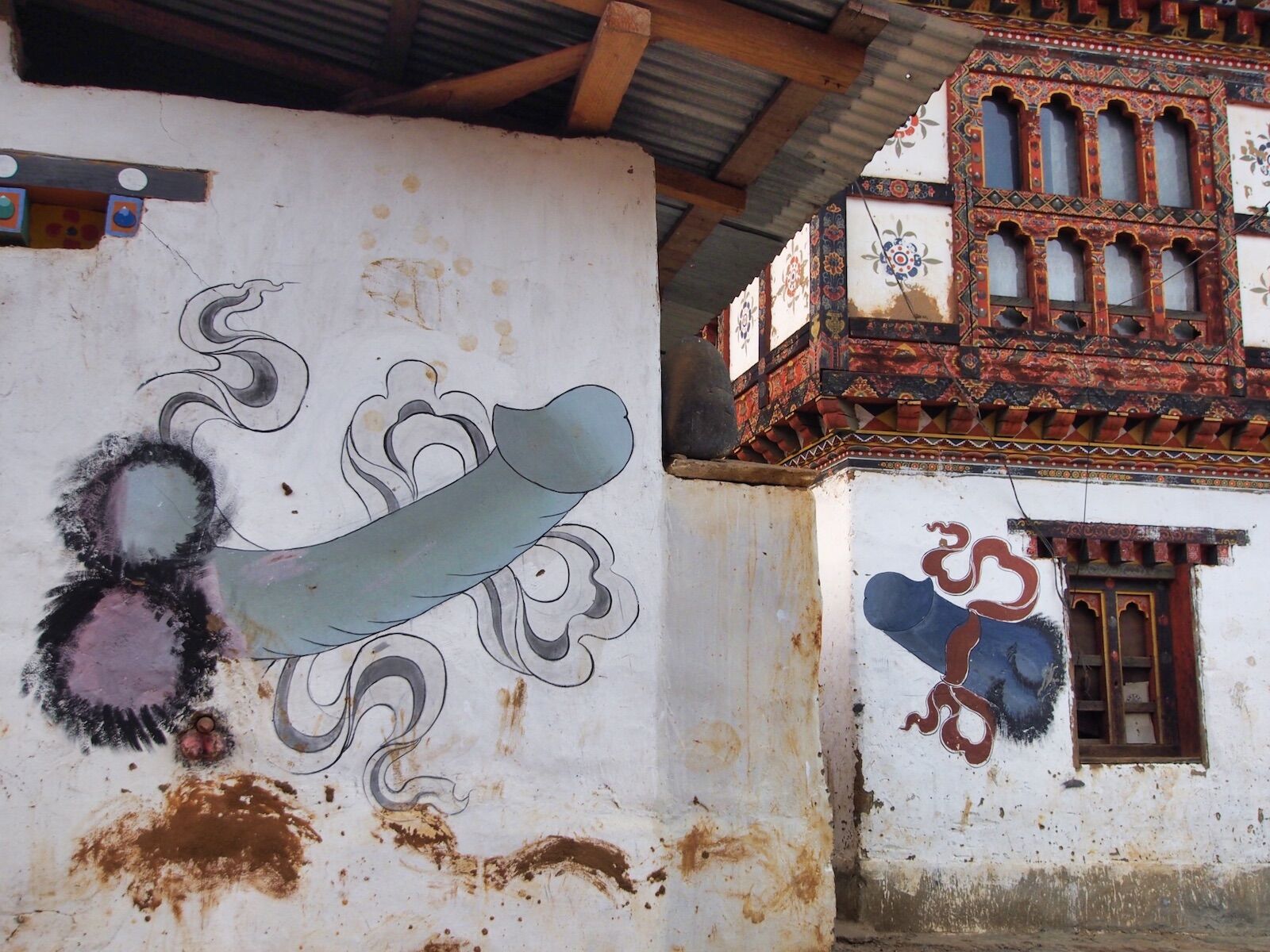 Bhutanese culture often features individuals who espouse Vajrayana teachings in ways that people from other cultures might regard as unconventional. Of these, popular characters include the atsaras – masked comedians who represent enlightened masters. With a large, handcrafted penis as a teaching tool, the atsaras entertain crowds during festivals while offering bits of Buddhist wisdom alongside their punchlines. In the same vein is another revered figure: the Divine Madman, AKA Drukpa Kuenley, a philosopher who opened minds with his provocative actions. Using his “flaming thunderbolt of wisdom” (his penis) Kuenley traversed Bhutan in the 15th century, slaying demons with it, and demonstrating to over 5,000 women that celibacy was not required in order to reach nirvana.

“I think of him as a rock star-philosopher”, says Ugyen Choden, who, like most Bhutanese, is a devout Buddhist. “Drukpa Kuenley loved wine, women, and song, and he did not reject these during his life. For us lay people it is a gift to know one can become enlightened without foregoing earthly pleasures.“ 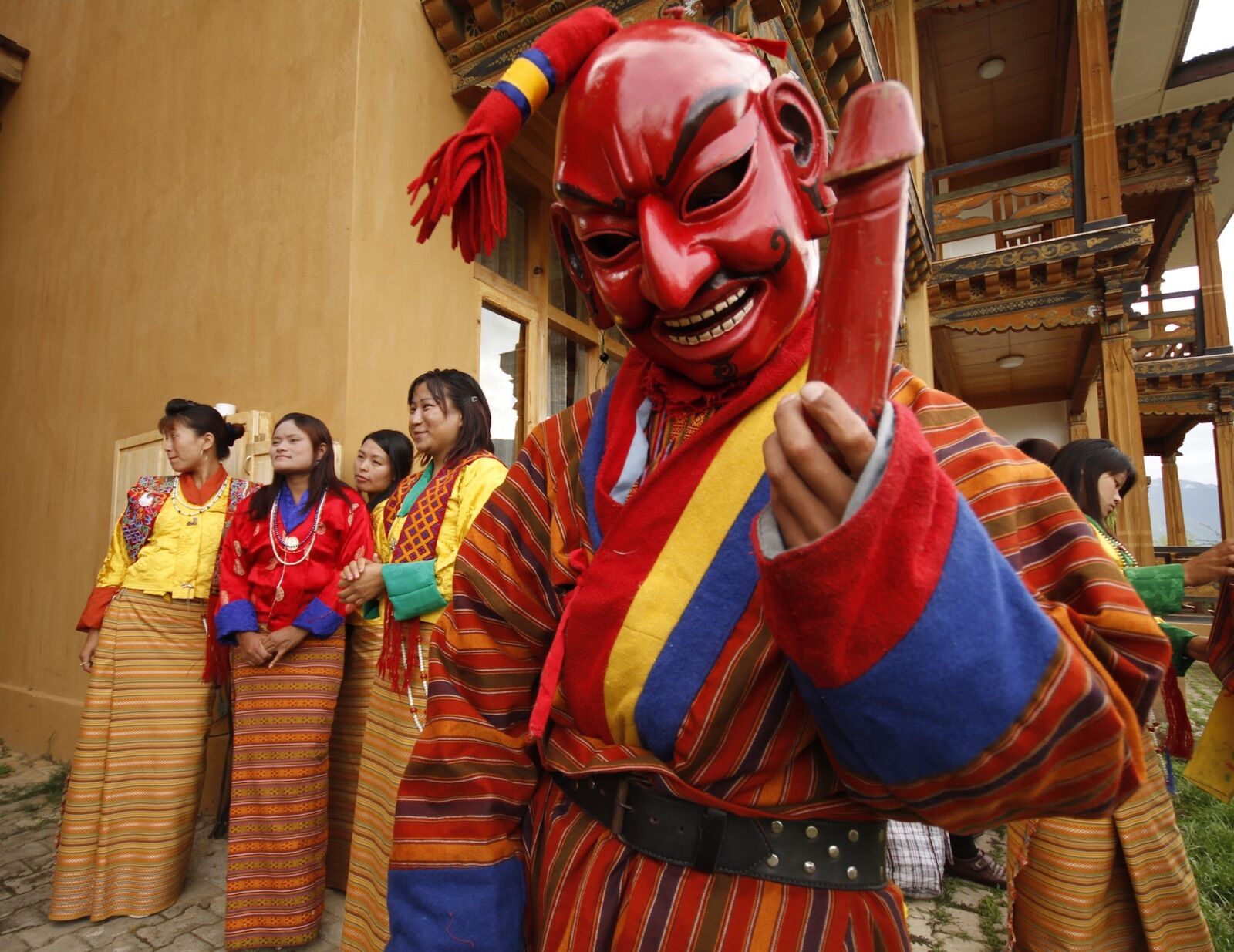 Today the Divine Madman’s legacy can be seen in the phallus imagery on display throughout the kingdom. Carved on house beams or painted on walls, these erect penises with their flaring eyes and fearsome ejaculations offer protection from evil spirits. But the phalluses are also symbols of fertility. In the town of Punakha lies the Chhimi Lhakhang, a monastery founded by Kuenley himself, which is constantly visited by Buddhists wishing to conceive. Paintings of the Divine Madman’s exploits adorn the walls of the temple’s inner sanctum. Here, devotees are blessed with a tap on the head from a huge wooden penis. 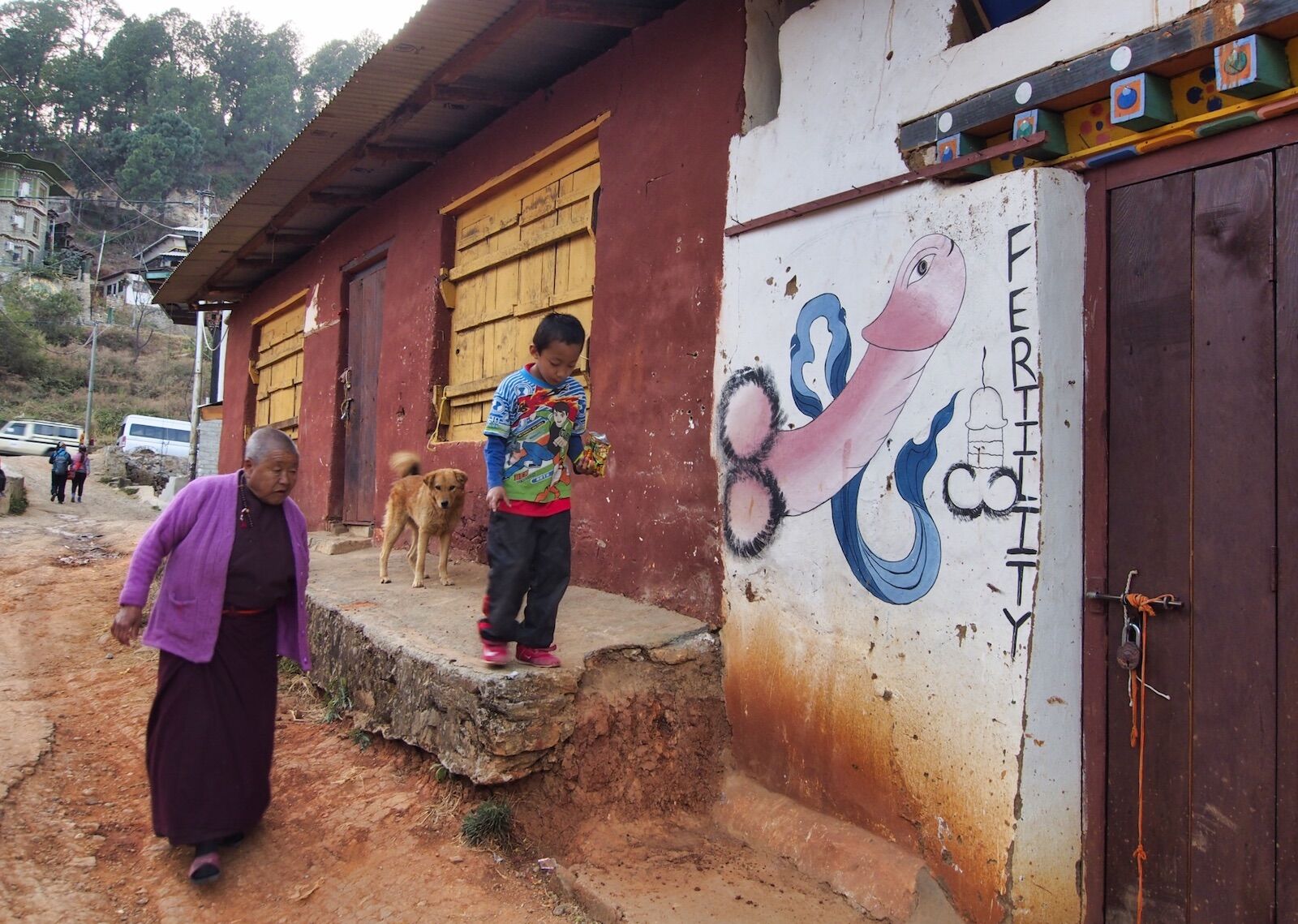 The town of Punakha, a two-hour drive from the capital Thimphu, is known for the many phallic symbols on its walls. Photo: Lester Ledesma.

Contrary to traditional Western sensibilities that often regard the phallus as an object to be repressed, the Bhutanese take is both practical and refreshingly honest. And its significance goes far beyond what any non-Bhutanese can comprehend. Perhaps the simplest explanation for the Bhutanese boner can be found in the words of my friend Tshering, a Buddhist scholar from the capital Thimphu. 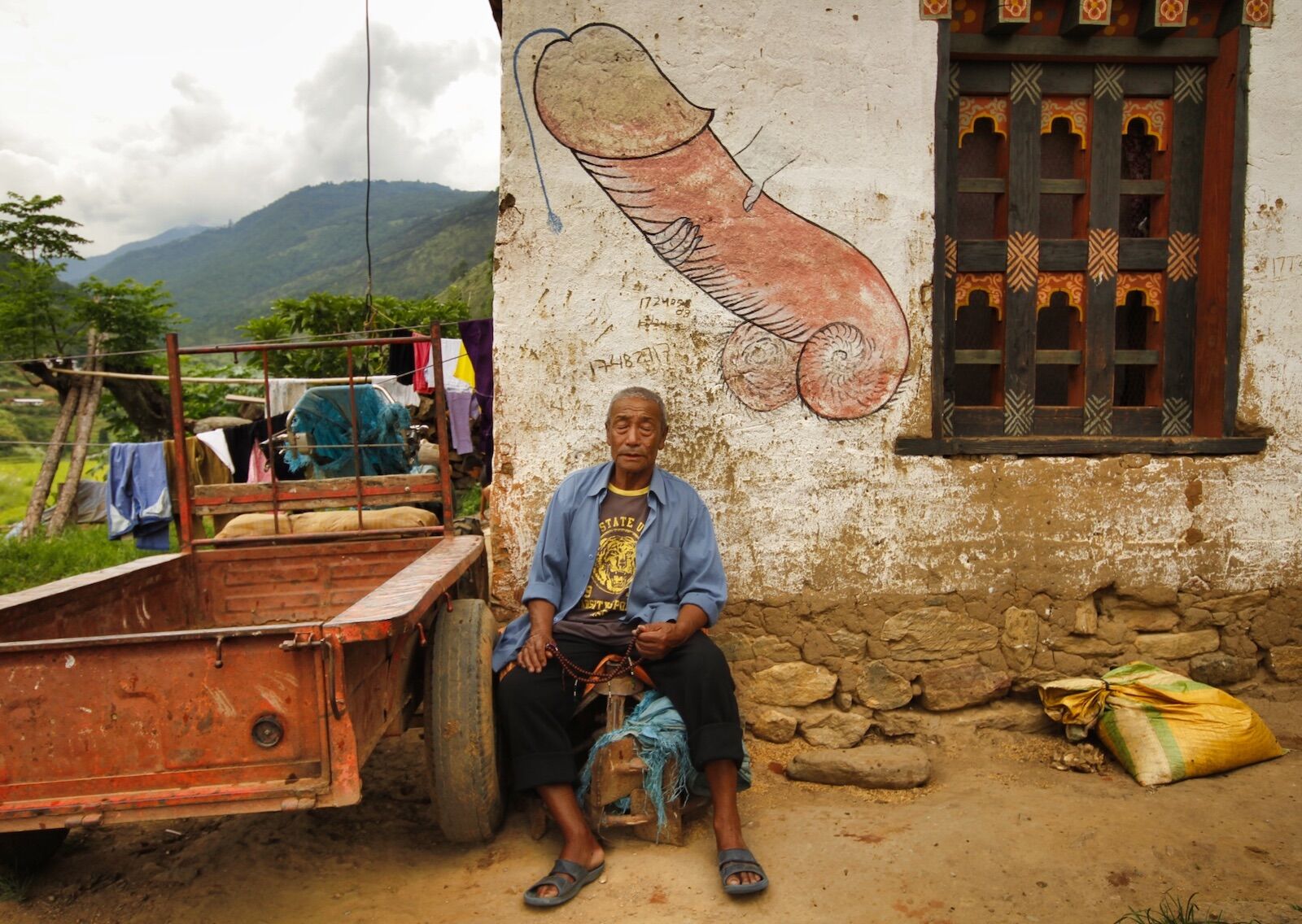 The image of the phallus is a reminder for men to control their urges and use them in a positive way. Photo: Lester Ledesma.

“The phallus is a force that can be used for both good and evil. When harnessed wisely it becomes a creative energy, a positive force”, he explains. “But when left uncontrolled it turns men into wild, lustful creatures. The image of the phallus is a reminder for men to control the force and use it in a positive way.”

CultureWhy You Should Visit Bhutan To Experience Its People — Not Just Its Mountains
Tagged
Art + Architecture Culture Religion Bhutan
What did you think of this story?
Meh
Good
Awesome

Trekking the Sacred Mountains of Bhutan

End of the Road: The Changing Lives of Bhutan's Yak Herders

I Can Feel Bhutan Calling Me Back

Meet the Only Country in the World That's Carbon Negative

The Rucksack Wanderer's Guide To Bhutan

Balloons of Bhutan: A Happiness Project