Editor’s note: These images originally appeared on bioGraphic, an online magazine about science and sustainability and the official media sponsor for the California Academy of Sciences’ BigPicture: Natural World Photography Competition.

The BigPicture Natural World Competition has just revealed its 2020 winners, and they include some of the most stunning photographs you’ll ever see.

The event is run by the California Academy of Sciences, and each year it encourages photographers from around the globe to submit pictures that celebrate Earth’s biodiversity and inspire viewers to protect it.

A contest showcasing the best photographs of the natural world is bound to cover a wide range of environments, subjects, and themes, and this competition certainly doesn’t disappoint.

The photos are divided into several categories, including Aquatic Life; Terrestrial Wildlife; Winged Life, Landscapes, Waterscapes, and Flora; Art of Nature; Human/Nature; and Coexistence, with a winner chosen for each. The grand prize was won by British photographer Andy Parkinson for his photo of a mountain hare in the midst of a snowstorm in Scotland.

All categories offer windows into rich environments from around the world, giving us a glimpse into the rich diversity of life on Planet Earth. From Kenya to Spain and even the waters of the Antarctic Ocean, these are the photographs that took the top spots in their respective categories. 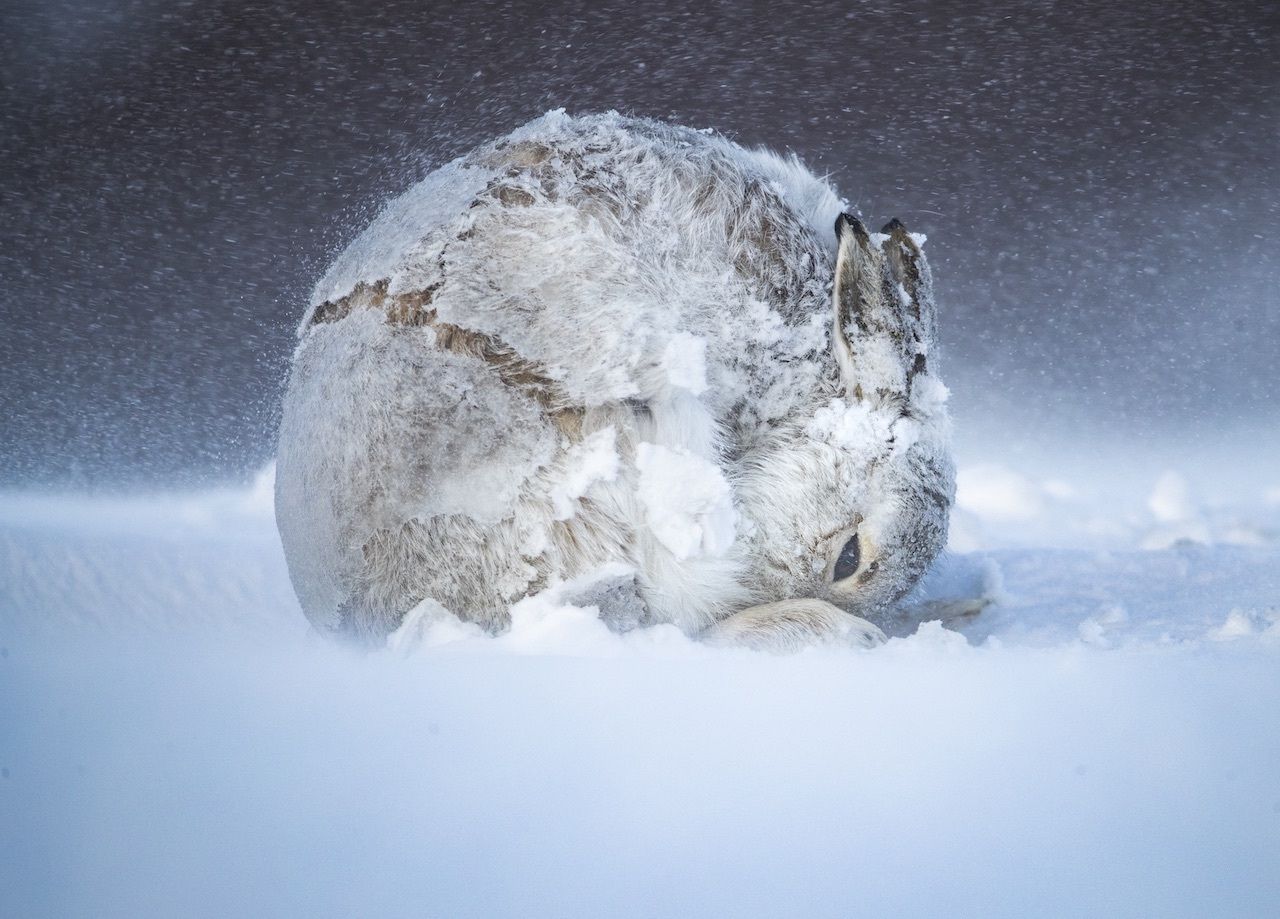 Andy Parkinson took this photo of a mountain hare, Britain’s only native rabbit species and its fastest-declining mammal, amid a snowstorm in Tomatin, Scotland. Although some hares ride out storms in burrows or depressions, this particular female created her own shelter, tenaciously tucking herself into a ball to stay warm. 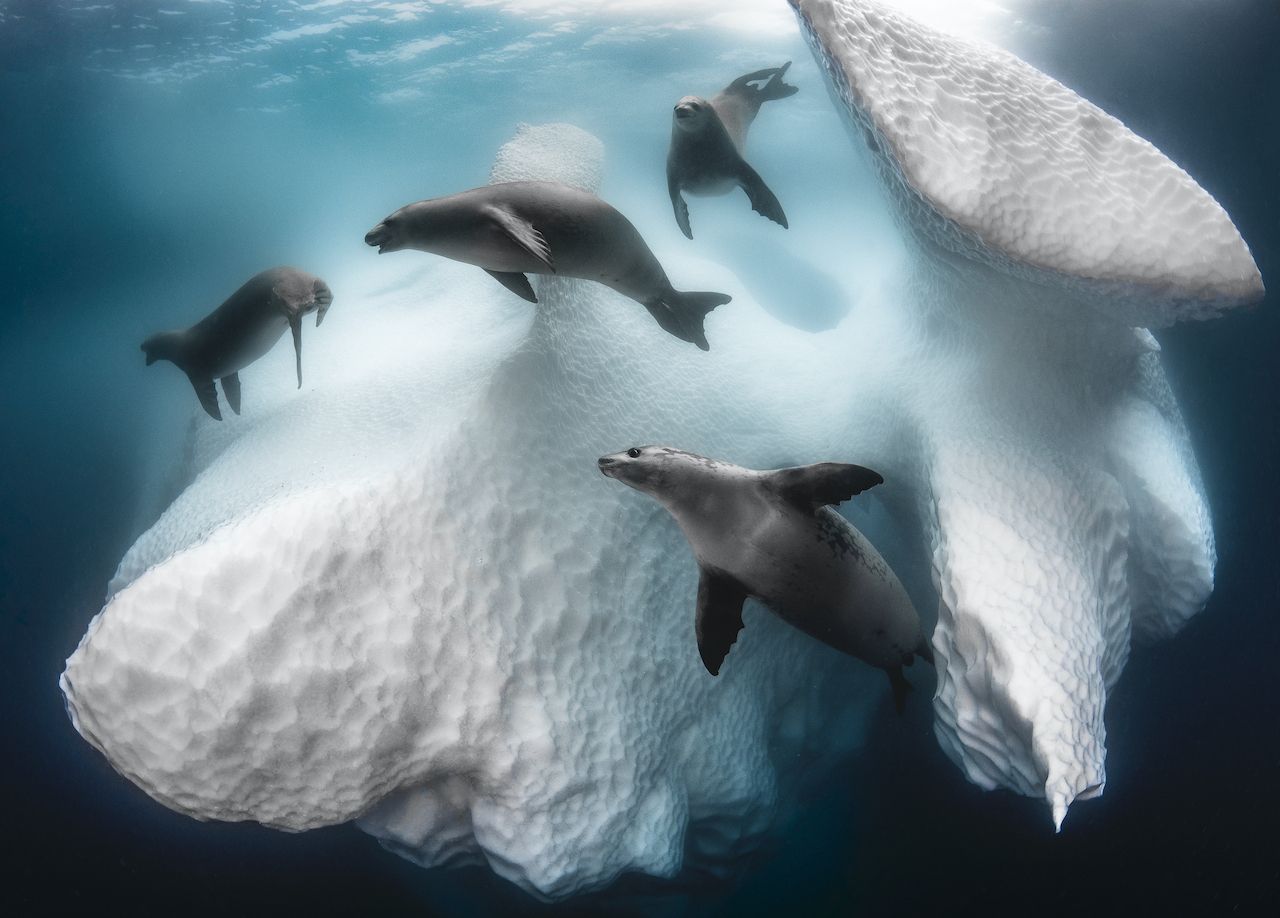 Capturing this scene of life below the Antarctic ice required photographer Greg Lecoeur to endure some very cold waters. The photo features crabeater seals swimming gracefully around the pack ice zone surrounding Antarctica, where the animals spend their entire lives. 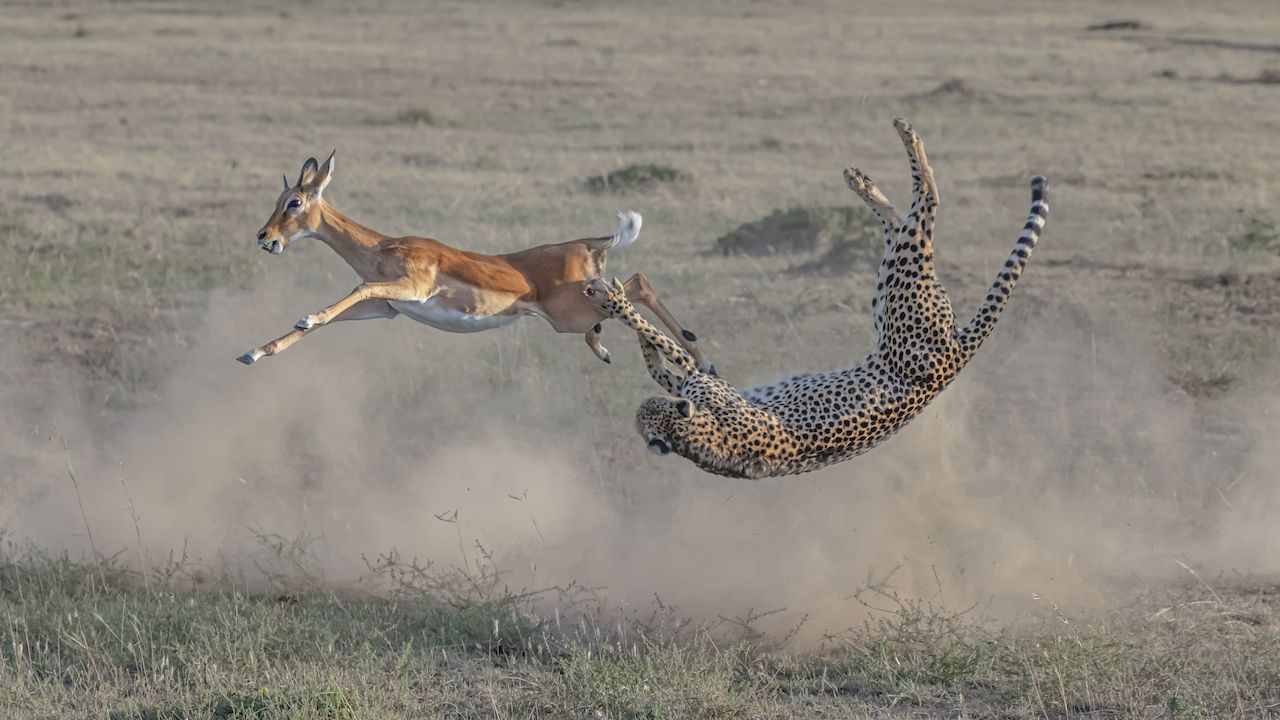 This action shot captures the pivotal moment when a cheetah lunges at its prey in Kenya’s Maasai Mara National Reserve. Cheetahs begin the hunt stealthily, blending into the environment thanks to their spotted coat, before accelerating at great speed (up to 60 miles per hour) and attempting to take down their prey. This particular cheetah tripped an impala, also a very quick animal, to prevent it from escaping — an example of agility and strategy used by the species to hunt. 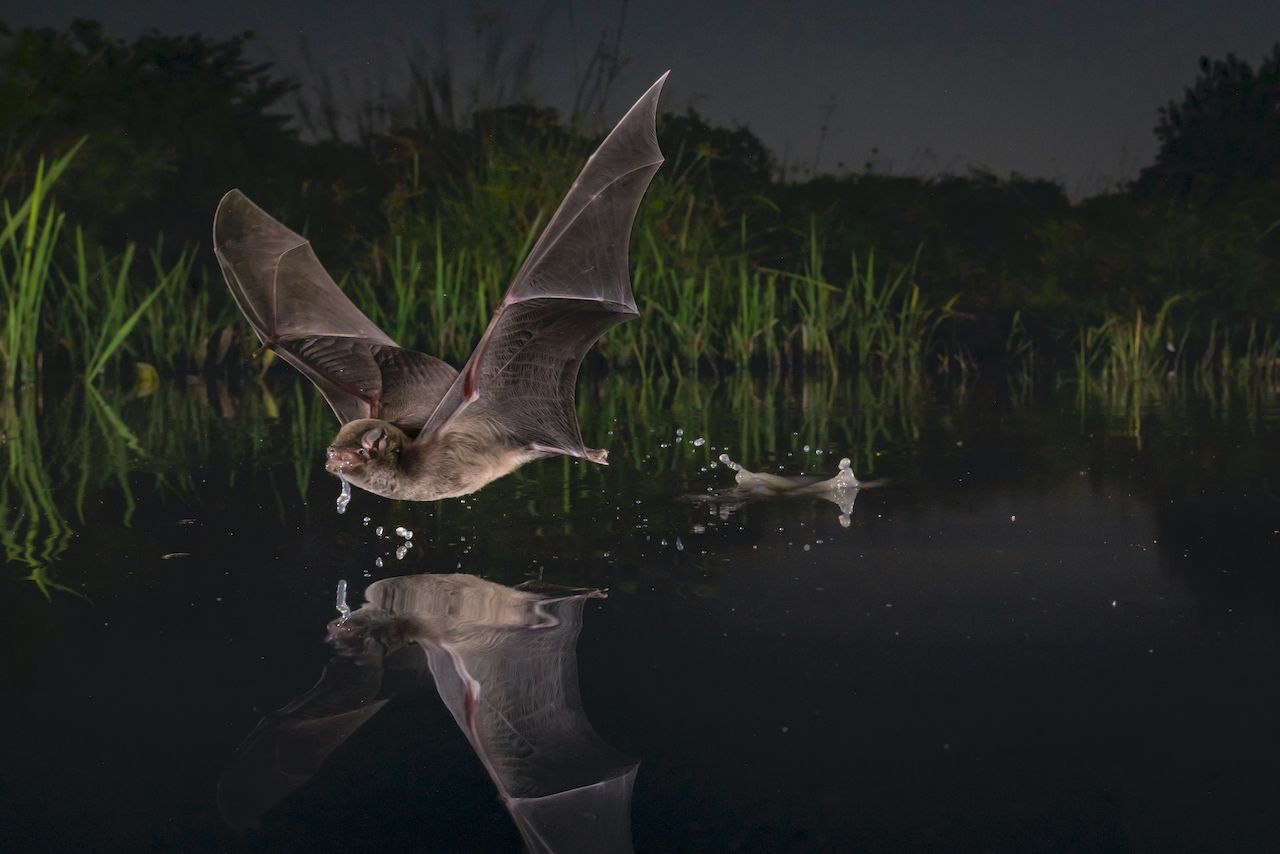 For the Mozambique long-fingered bat, summer means longer journeys to find water, and without adequate water, bats can become weak and susceptible to disease. This bat, in Gorongosa National Park at the southern tip of Africa’s Great Rift Valley, was photographed skimming over the water for a much-needed sip. 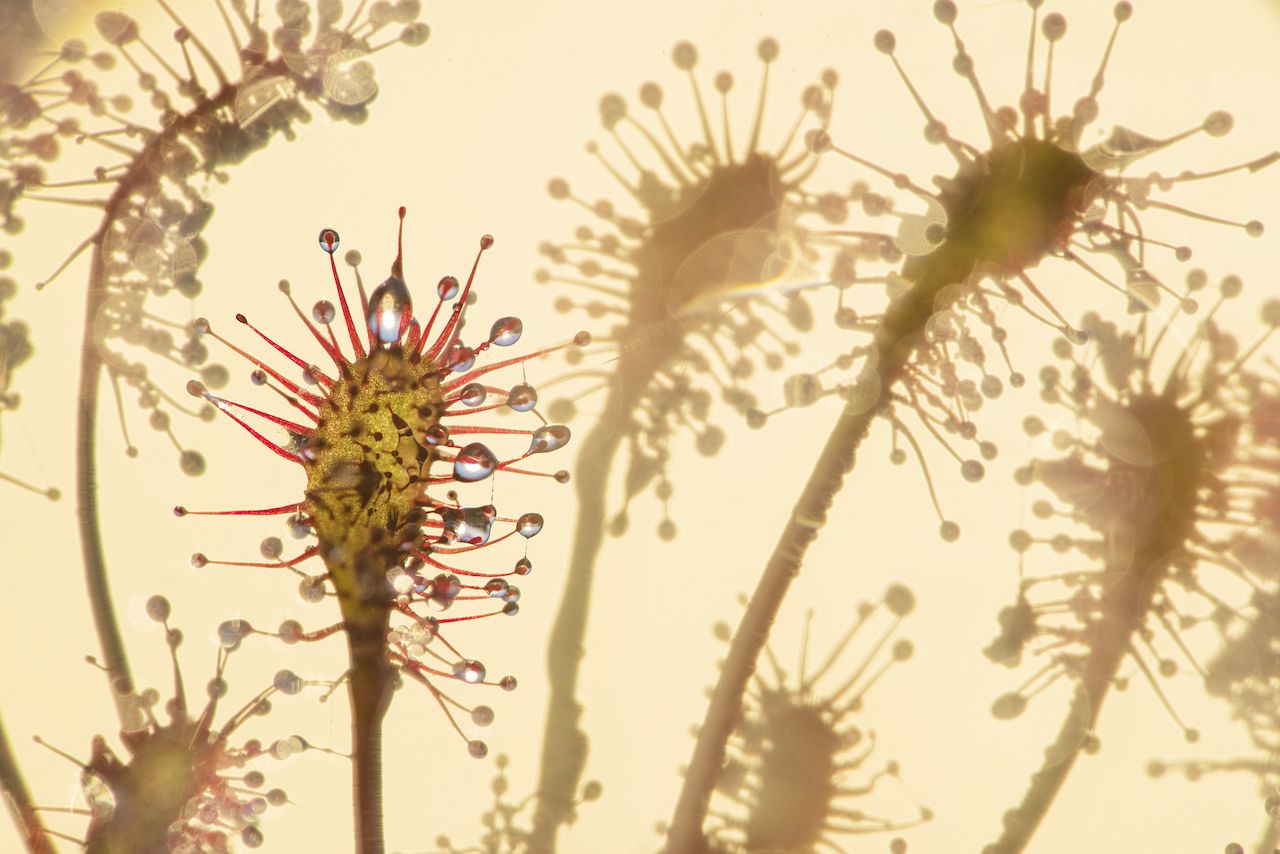 When insects land on the oblong-leaved sundew to sip the nectar, they remain stuck until the carnivorous plant slowly curls its leaves around it and liquefies the prey with digestive enzymes to feed on it. If it accidentally ensnares something inedible, it immediately releases it from its grasp. This particular plant was photographed in Hatertse Vennen Nature Reserve in The Netherlands. 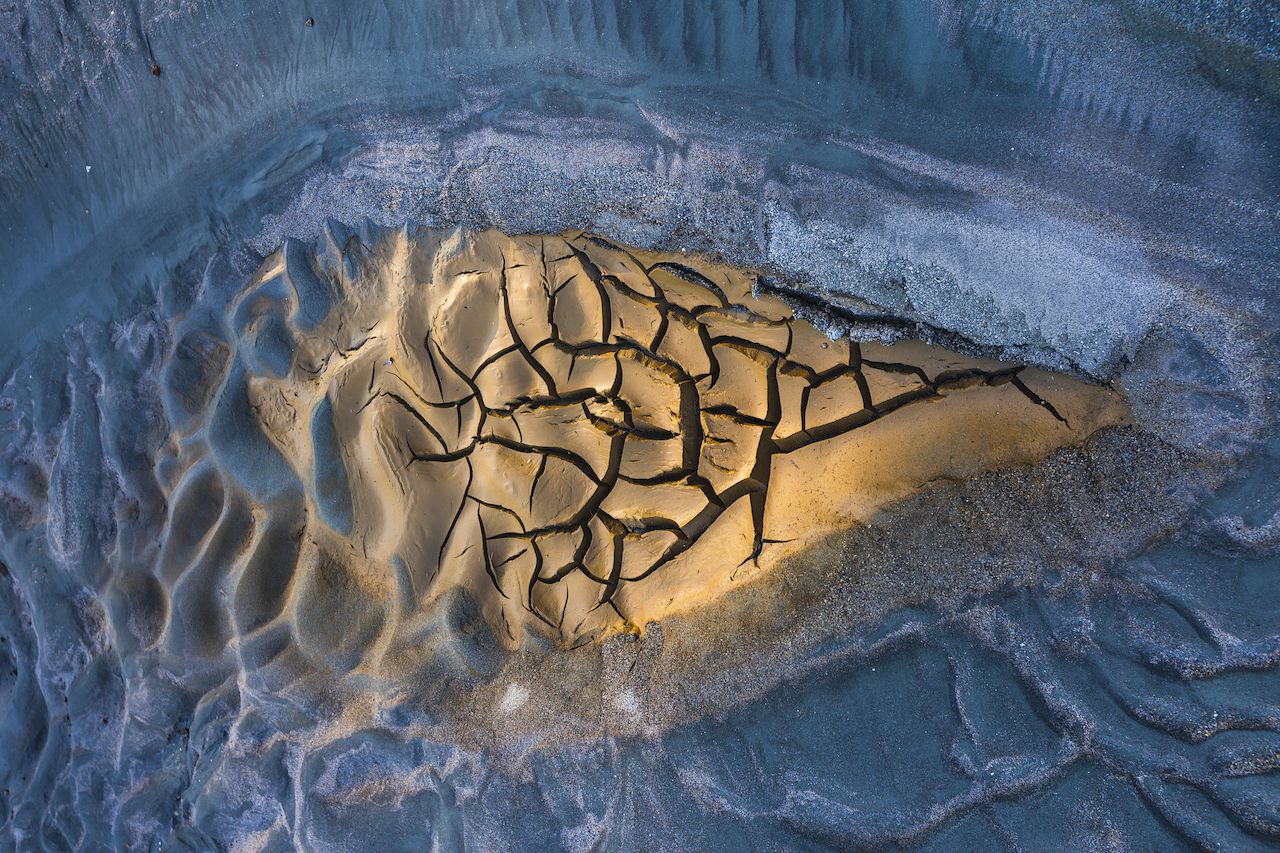 Along Spain’s Río Tinto river, layers of multicolored sediment mix with blood-red water to produce an otherworldly effect. This photo shows cracked mud at the river’s edge, whose coloration is caused by runoff from millennia of mining in the surrounding Sierra Morena. The pollution is so bad that the water is currently unusable by the surrounding communities, and NASA has even used the river to simulate the conditions of life on Mars.

Human/Nature: “The Cost of Cats” 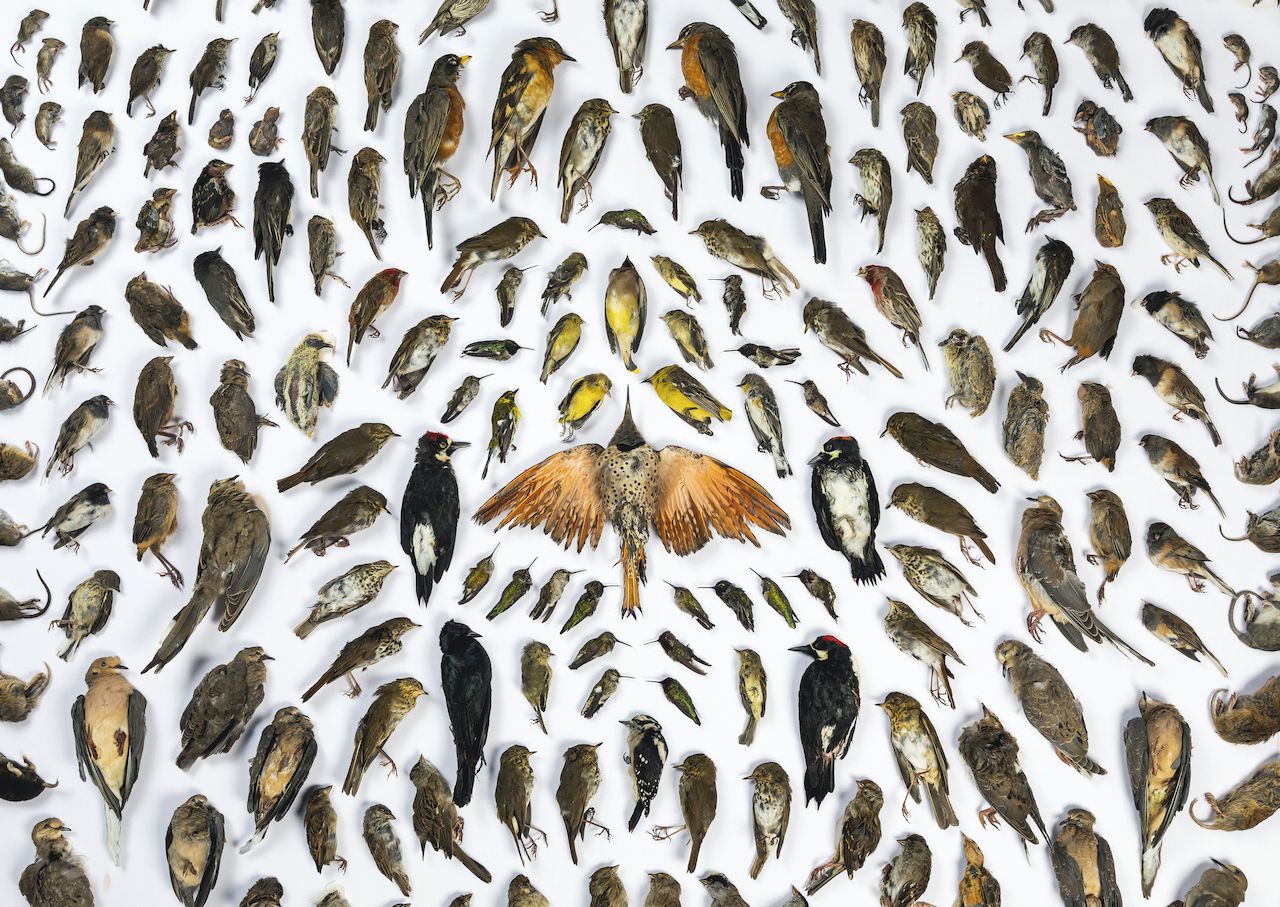 Each year the staff at WildCare, a California rescue organization, attempts to rehabilitate hundreds of birds and other wild animals mauled by cats. The 200 birds shown in this picture did not survive. The photographer, Jak Wonderly, said, “I wanted to create an image to show some of the impacts our pets have on the wildlife around our homes.” This photo was taken in San Rafael, California.

Coexistence: “Guardian of the Giraffes” 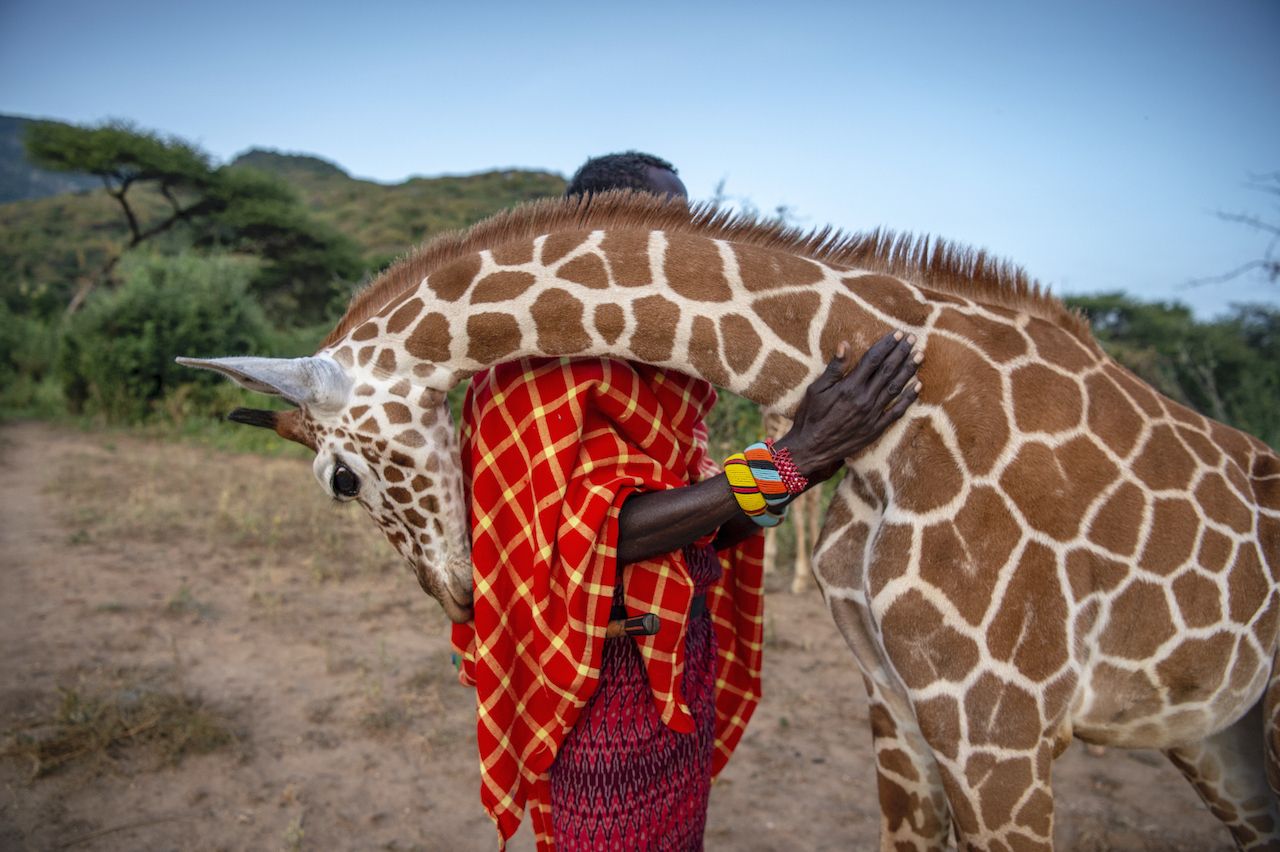 This heartwarming photo illustrates the bond between humans and animals whose lives are intertwined. Photographer Ami Vitale has been engaged in a decades-long project documenting the bonds between the Samburu people and wildlife in northern Kenya and aims to capture the story of how the Samburu became advocates for those wild animals and their habitat. This photo was taken in Reteti Elephant Sanctuary, Kenya.

WildlifePhotographer Captures Extraordinary Shots of a Cross Fox in Canada
Tagged
News Wildlife
What did you think of this story?
Meh
Good
Awesome