Sicily is Italy’s biggest island and offers much to explore amongst its almost 10,000 square miles. While food is generally top of mind for visitors, Sicily is home to ancient structures stretching back thousands of years, stunning natural reserves, and rugged coastline. The best way to take it all in is on a bicycle. Given the undulating terrain, a decent fitness level is advised, but routes cater to experienced and beginner cyclists alike. These biking routes will let you explore the region’s impressive scenery, food, and history — and are the ultimate way to experience the island.

Preparing for a bike trip across Sicily 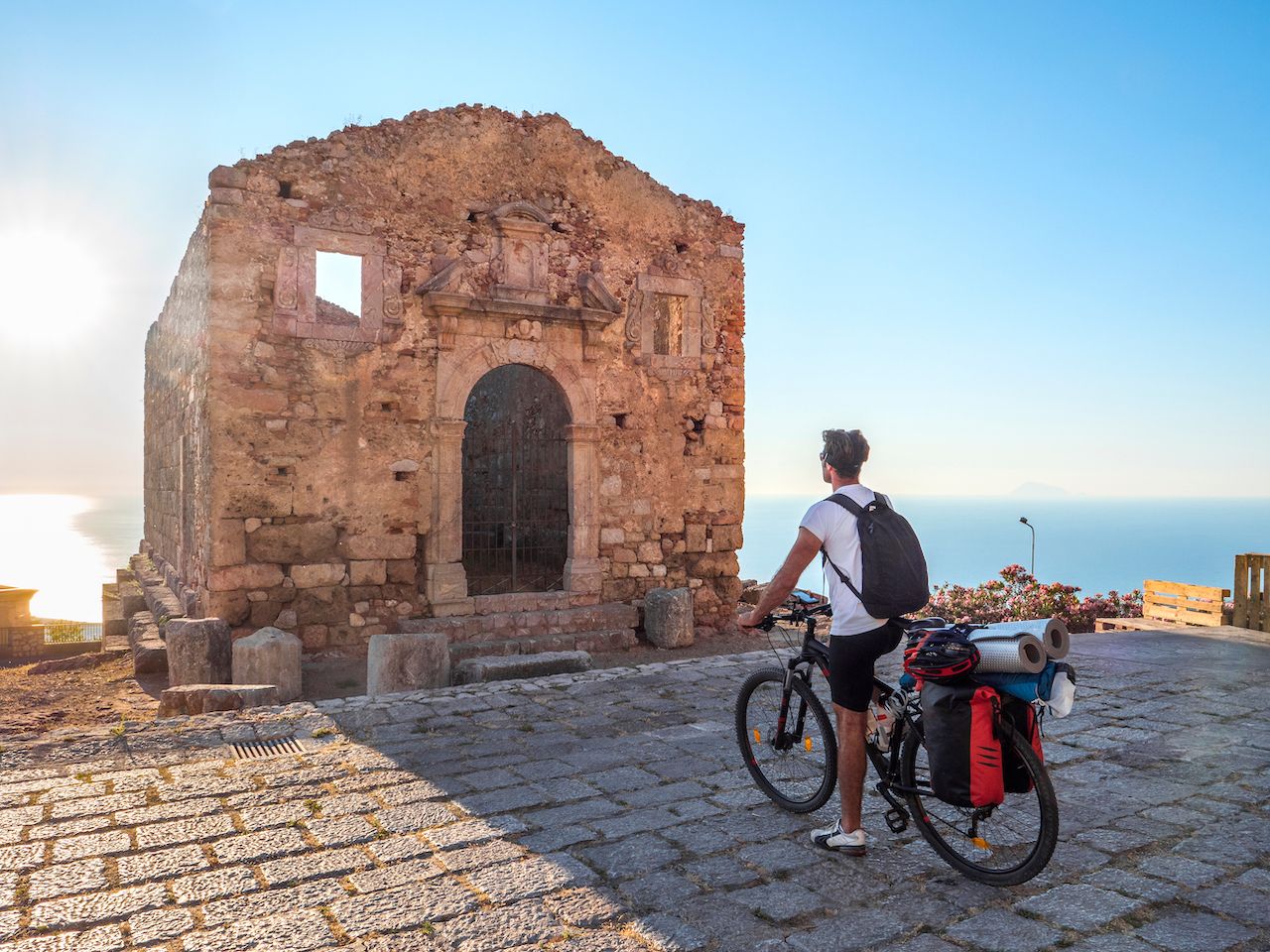 Some basic bicycle knowledge will help your journey. Knowing how to change a flat tire is a must — also, always have spare tubes with you. You should also know how to clean the sprocket, that spiky wheel pulling the chain. Other essentials include knowledge of road rules, a lot of water, a map, and the right equipment, including a good helmet.

Food-wise, pack calories but plan to eat meals in the towns you visit. Sicilian cuisine is very healthy and rich in flavor. It’s also more affordable than some other regional Italian cuisines, another factor that makes a bike trip here an ideal vacation. Rent a bike in Catania from one of the many shops available, including Zeronove and Catania en Bici. Expect to pay between $20 and $50 per day, depending on bike style and brand. Companies like Cycling Sicily offer guided tours that can include lodging and airport transfers, as well as bike rental if necessary.

Nature reserves and sweeping views in the northwest 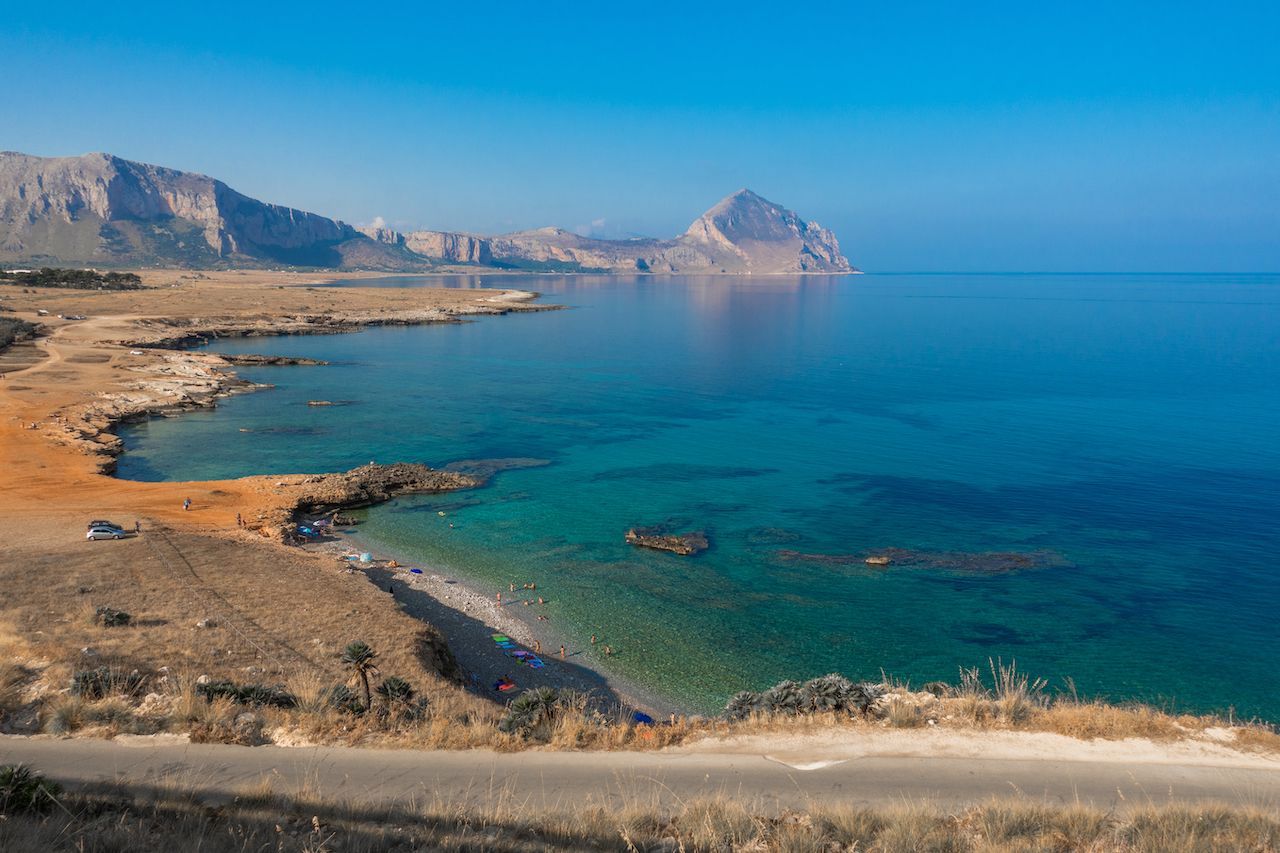 This ride in the northwest corner of the island is doable in a day or less. Start from the northern entrance of the dello Zingaro Nature Reserve, founded in 1981 as Sicily’s first such designated area. The views on the ride look east to the opposite side of the Castellammare Gulf, and to your right, the sloping hillsides head straight down into the sea.

Inside the reserve, you’ll likely encounter at least one of the 39 species of birds, mostly of prey, that call the park home, including the peregrine falcon. Hop on the bike and head north. The route gently rises one-third of the way. The coastline is typical Sicilian, with the landscape rolling straight to the sea, though you won’t see sand. It’s very green until the hottest periods of summer but nearly devoid of trees, lined instead with thick bushes and shrubs with grass and flowers carpeting the ground — another characteristic of the Sicilian landscape. The narrow road has little traffic, with the breeze over your ears standing as the only sound beyond the waves on the rocks when you are closer to the water.

From the first nature reserve, take the Strada Provinciale 63 (or SP 63) north. It’ll end in San Vito lo Capo. From San Vito take the SP 16 south. The easy, downhill arrival in San Vito lo Capo — midway on a short stretch of coast facing north — is quite anonymous, but the spot is worth a pull-off. The white sand and crystal-clear water provide great views for snorkelers.

From there, head south counterclockwise to the Monte Cofano Nature Reserve. The right turn to reach Monte Cofano Nature Reserve is actually unnamed; it’s basically the right turn as soon as the main road starts diverging form the coastline before arriving at the village named Castelluzzo. The road is virtually flat, with small villages and crops to the side, and you can hop into the water nearly anywhere for a quiet dip. The road stops inside the Mount Cofano Oriented Natural Reserve, which is right by the 16th-century Torre del Cofano. Mount Cofano is in the middle of the reserve, with limestone rock offering a unique change in the coastal scenery.

September is an ideal time to do this ride as the annual Cous Cous Fest, an international festival full of shows and music, takes place in the beginning of the month, and the International Kite Festival happens towards the end. Temperatures are cooler, and much of the summer tourist crowd has gone back to school. Don’t leave before trying some Marsala, the fortified wine produced not far south in the homonymous D.O.C. area.

Sicilian Baroque architecture in the southeast 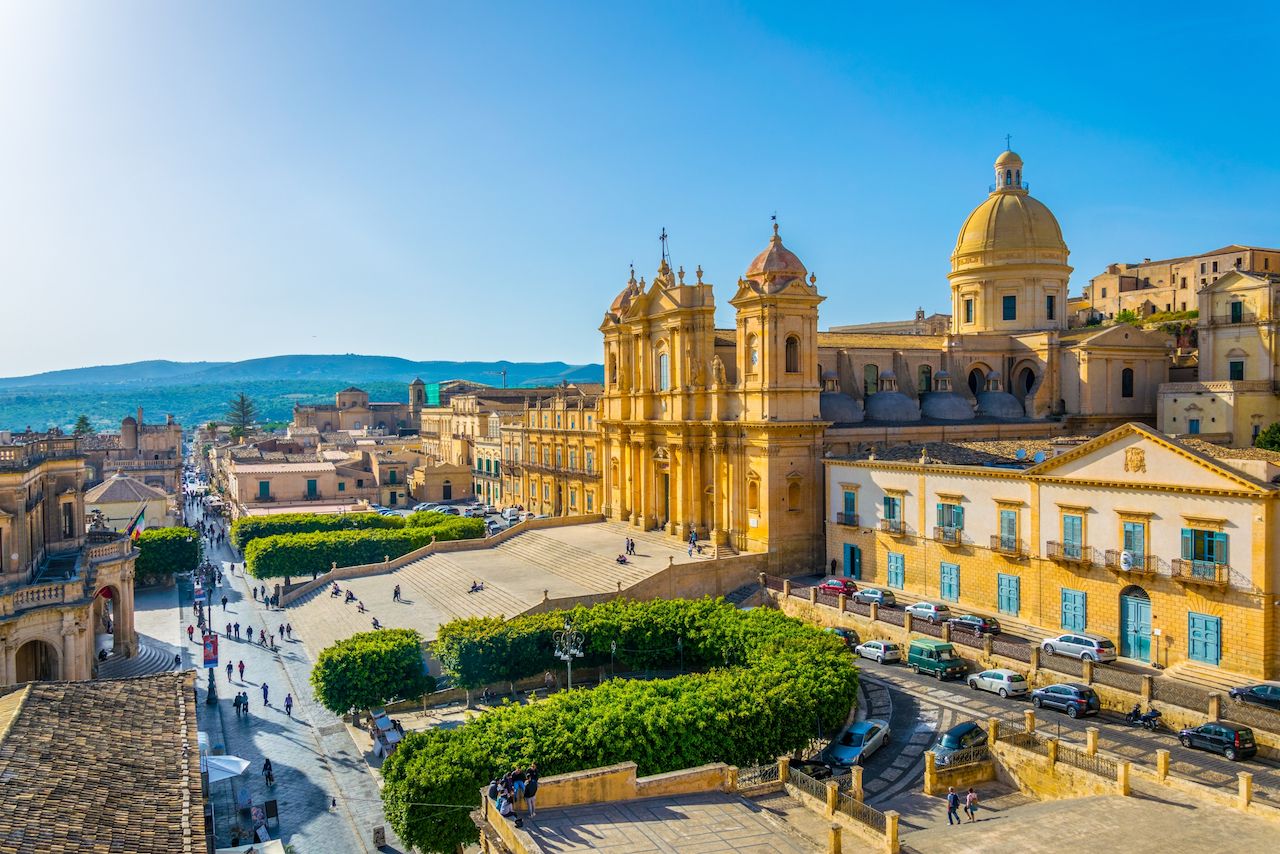 The Sicilian Baroque is recognizable because the architects and artists who designed the region’s development, many trained in Rome, accentuated the decorative and often dramatic characteristic of the Baroque style. The aesthetic is so valued here that after a devastating earthquake hit in 1693, artists and artisans were called in for reconstruction.

Your job is to bike through this aesthetic, starting in Ragusa, a small hilltop city in the southeast of the island. Called La Città dei Ponti (The City of Bridges) for its three historic and scenic bridges, it has been a UNESCO World Heritage site since 2002. Approach the city’s 18th-century Duomo di San Giorgio from the east. The Cattedrale di San Giovanni Battista influenced the post-earthquake urban planning of the western part of the city where it’s located. The Cathedral, built in 1777, sits on a really wide platform to make for the sloping ground. The arches at its bottom, with small cafés and storefronts, create a vibrant foreground base to the setback façade, also wide and asymmetrical.

From Ragusa, cycle east to Noto and towards the coast along SP 23. This part of the ride is mostly downhill following an initial hike up. Stout, dark-green olive trees dot the landscape along with short drywalls forming the geometrical shapes of plots and properties. The color palette of the countryside is limited — white, green, and light brown — but colors are saturated in stark contrast to the narrow road. It’s safe, but pay attention as bicycles are not a common sight. You’ll turn onto SP 28, SS 17, and lastly Highway 115 for the final push.

Noto, also listed as UNESCO World Heritage site, is a big town on a flat landscape, characterized by narrow roads and two-story buildings and quite a few small piazzette (small town squares) that seem to pop out of nowhere. Unique, baroque-style palaces and churches around Noto include the 1727 San Domenico Church, with its striking pink, convex façade combining curves, columns, and openings, as well as the 1776 Cattedrale di San Nicolò. Noto has been called the “perfect baroque city” by some historians. Beyond the architecture, you can savor local focaccia with various fillings at one of the many trattorie on the east side of town. Wash them down with Nero d’Avola wine, made around the corner in Avola.

Riviera of the Cyclops in the east 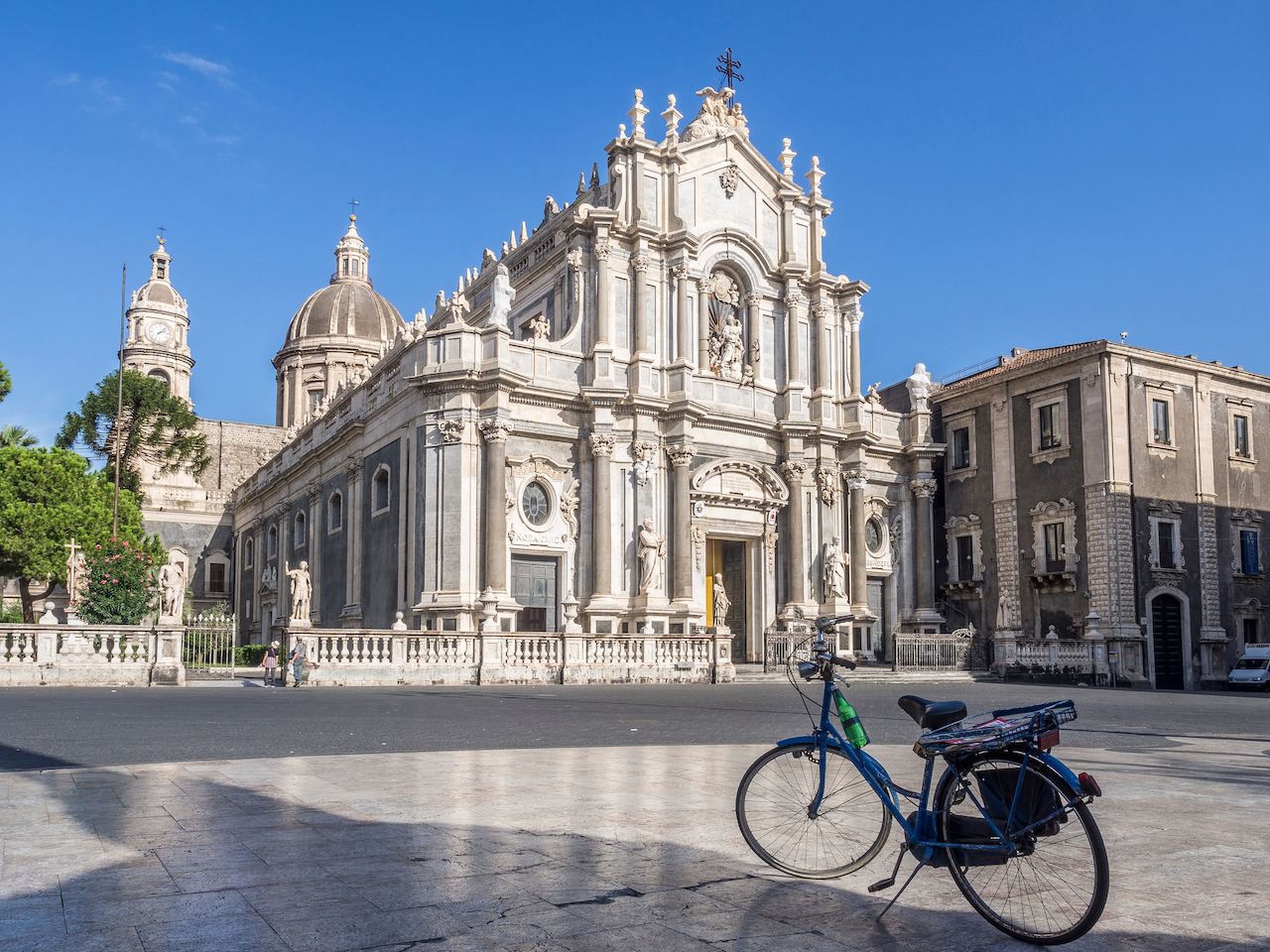 This easy ride on Sicily’s eastern coast avoids major roads while keeping the sun out of your eyes as you pedal through the city of Catania, as well as the residential waterfront areas north of the city center. Begin on the SS114 in Catania and veer onto Via Acicastello just north of the city. This road will merge with Via Angelo Musco and eventually Via Antonello da Messina and Via G Pezzana. All are essentially the same road as they pass through different beach towns. The route ends at the small fishing village Aci Trezza — though you could take it further to Capo Mulini if you’d like more of a push.

In Aci Trezza, have lunch at one of the restaurants along the seaside, enjoying the view dominated by the Cyclopean Isles. This is the location where Homer places Odysseus’s misfortune with one of the Cyclops, Polyphemus. The sea stacks of the small archipelago were formed by thousands of natural stone pilasters made by cooling lava. The biggest of them is the islet where supposedly Odysseus spent some time, and it is specifically mentioned by other historic authors such as Pliny and Virgil.

Parts of Catania itself aren’t very bike-friendly, but the city is rich in culture and history. The San Gaetano alle Grotte church and its tunnels, constructed in the seventh century, are an expansion of a church from 260 AD. The Achilliane Thermae Roman baths from the third century lay under the Duomo and are preserved, untouched. The Roman Amphitheater, half unearthed, is also worth stopping at before heading north on the bike route. 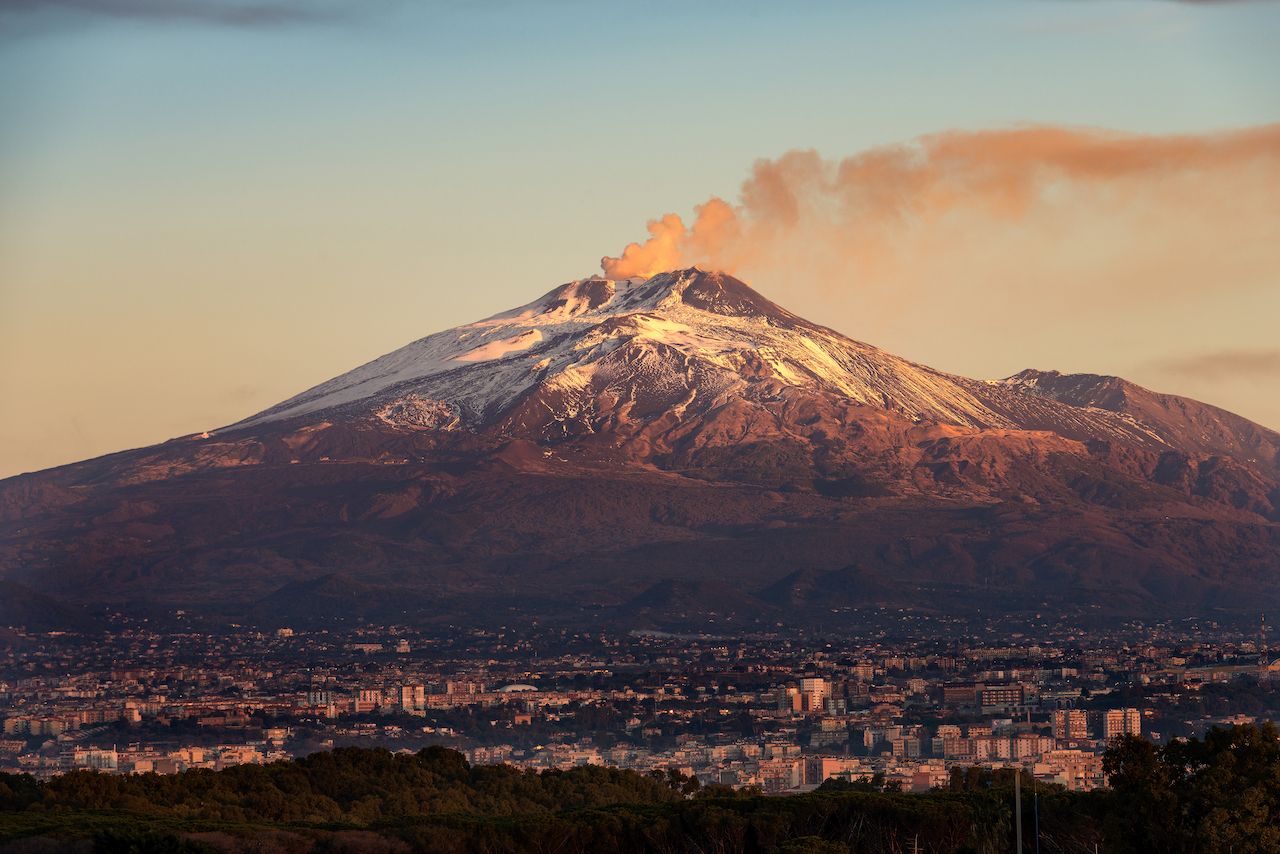 Mountain bikers should visit Mount Etna, Europe’s tallest active volcano at 10,912 feet. Located just north of Catania, the trails here are among the island’s most accessible off-road trails, though unless a bus takes you up to the top, be ready for a steep uphill to start the ride. Whether you pedal up or only down, the ride is challenging and quite a workout, but it’s worth it to ride dirt trails through the moon-like mountainous landscape.

A ride here can vary from a quick day trip to a multi-day excursion, and it can be guided. Guided tours will leave from designated areas in the city. If you head out on your own, you’ll need to drive to Parco Dell’Etna and park near one of the trailheads, which are visibly marked.

Etna dominates the skyline of the entire region, and on a clear day, you’ll have views for miles, including towards the sea looking east. The smell of sulphur may dominate the air, but the scent dissipates as you make your way down the hill. As you pass the Giovanni Sapienza Refuge, on the southern slope, you’ll be among a cluster of craters in the hillside creating a giant “Y,” most of which you can bike to. Further down you’ll find vineyards and orchards. The terrain is rugged, steep, gritty, and changes color from rust to black. Also, the weather changes quite suddenly, and fog isn’t uncommon even in the warmer season. Lastly, remember that Etna is an active volcano. Make sure there are no safety warnings in place before you ride.

CultureCatania in Sicily Is a Blend of Three Distinct Cultures, and It’s Beautiful
Tagged
Cycling Insider Guides Sicily, Italy
What did you think of this story?
Meh
Good
Awesome

What It Looks Like To Sail Italy's Aeolian Islands