While hundreds of women gathered to march on Washington, DC, in 2017, shortly after the presidential inauguration, Bloodroot, a vegan and vegetarian restaurant and bookstore in Connecticut, also had an important moment that year. It marked its fourth decade operating as a welcoming space for feminist writers, speakers, and thinkers.

Bloodroot — its walls packed with antique photographs in its dining room and bookshelves stacked with women-published works — is much more than a shrine to political movements of the past. Since opening in Bridgeport in 1977, this women-run establishment, co-owned by Selma Miriam and Noel Furie, has remained a place to not only enjoy a vegetarian meal but also to encourage open dialogue about politics, feminism, social justice, and human rights.

“We started right in the middle of second-wave feminism,” said Miriam while slicing up red peppers for a crepe filling. “And a number of women across the country were wanting to start women’s centers. Mostly they were bookstores; some of them were clothing exchanges.” 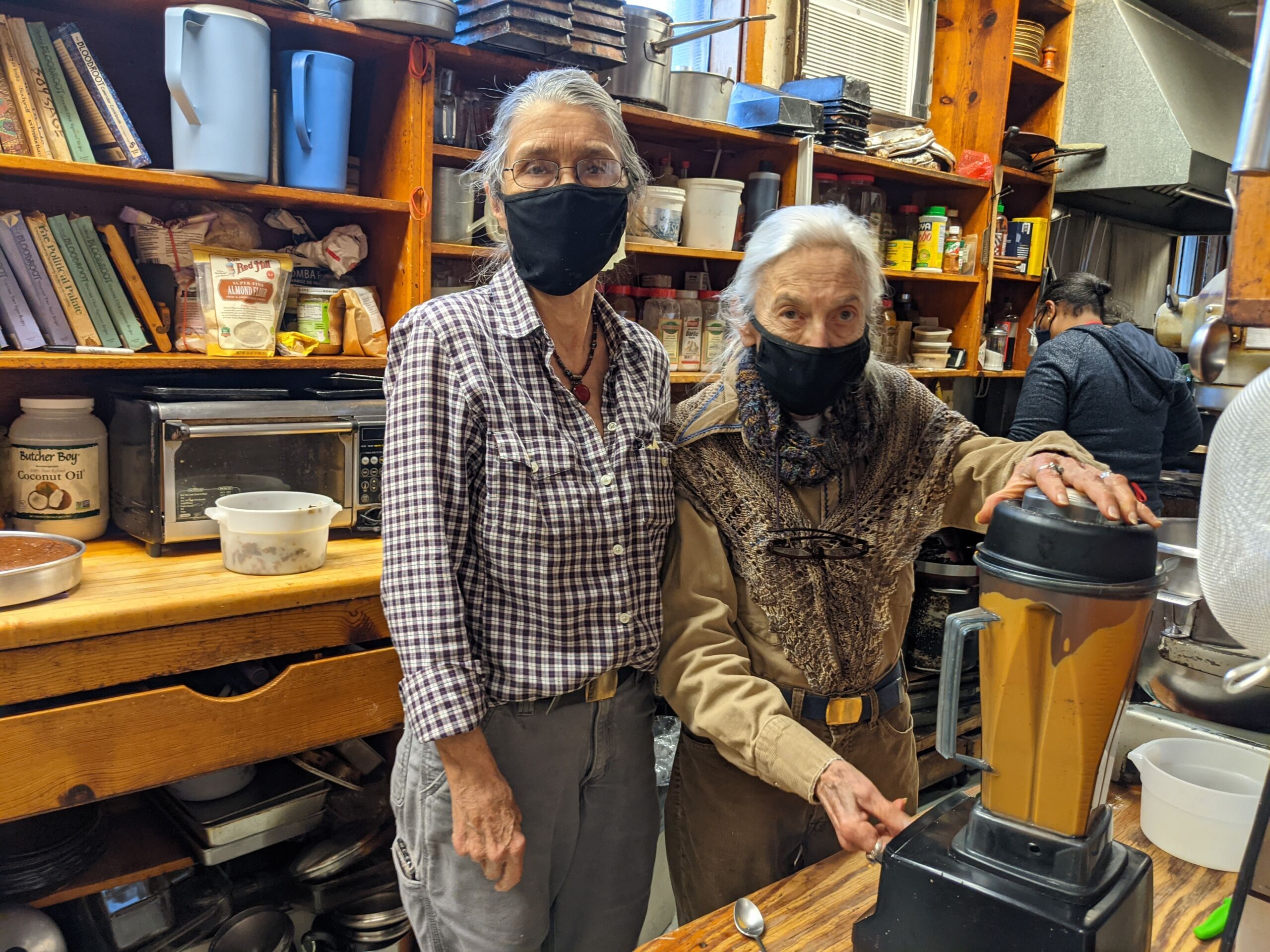 Around that time, Miriam and Furie met through the National Organization for Women and became friends. They watched as other women banned together to create their own feminist restaurants, including Mother Courage in NYC’s West Village, providing a space where women could dine without being accompanied by a male chaperone.

“We were housewives, both of us; we had children,” remembered Furie, “And that’s what you were supposed to do in those times.”

Yet the times were changing and perceived notions about a woman’s place in society began shifting. Two of their friends, both of whom supported animal rights, encouraged the pair not only to open a restaurant but to serve an entirely vegetarian menu. With help from Miriam’s parents, the two women were able to get a mortgage to purchase a former machine shop on the bank of Burr Creek in Bridgeport’s Black Rock neighborhood. 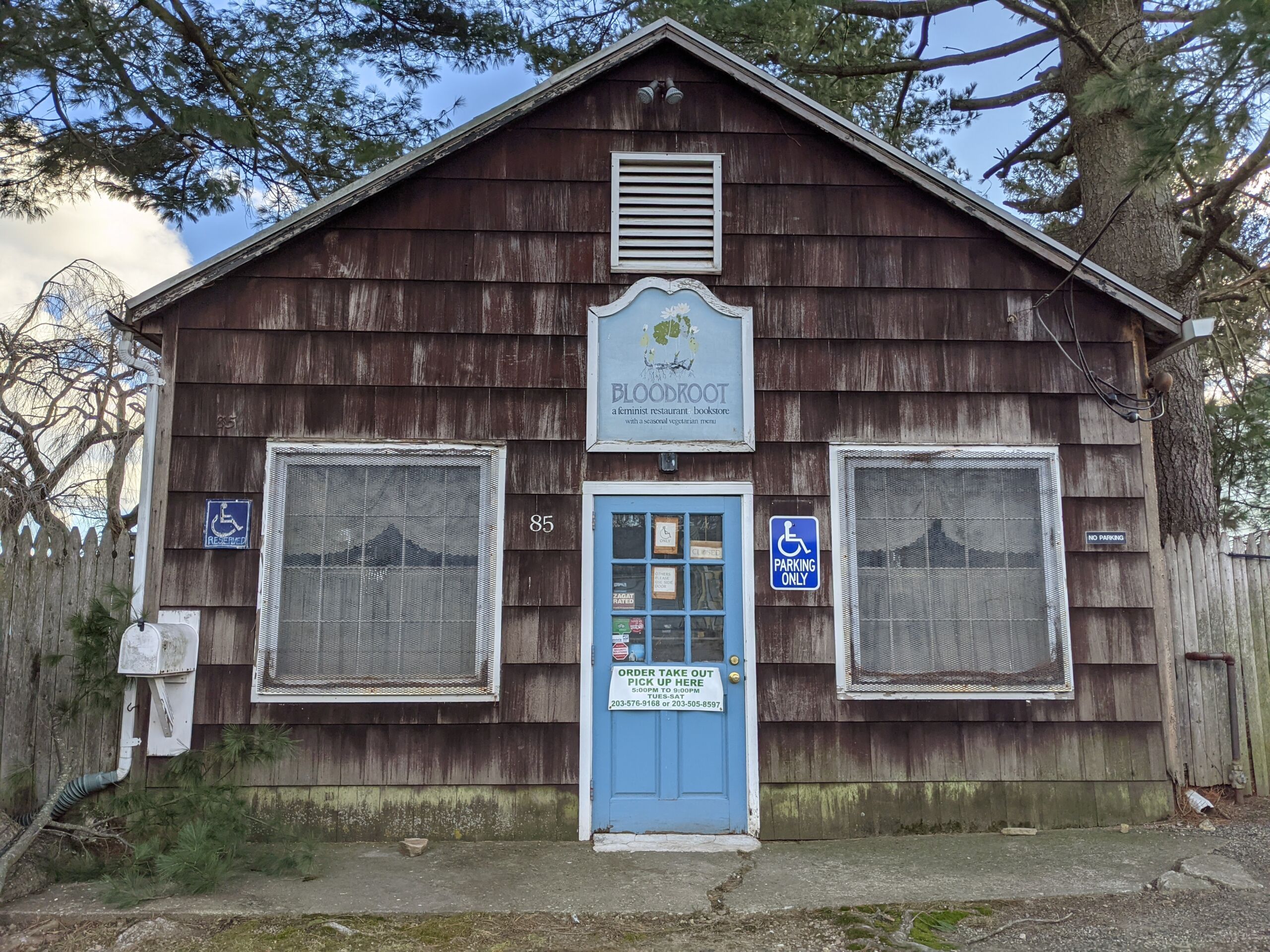 Named after a flower, Bloodroot still operates as a feminist collective. There are no professional, classically trained, award-winning chefs preparing the food. Instead, the women-only kitchen staff, including Furie and Miriam, refer to themselves simply as cooks. There are no waitresses either. Diners pick up their tray orders at a counter and also then dispose of their dirty dishes in designated bins. 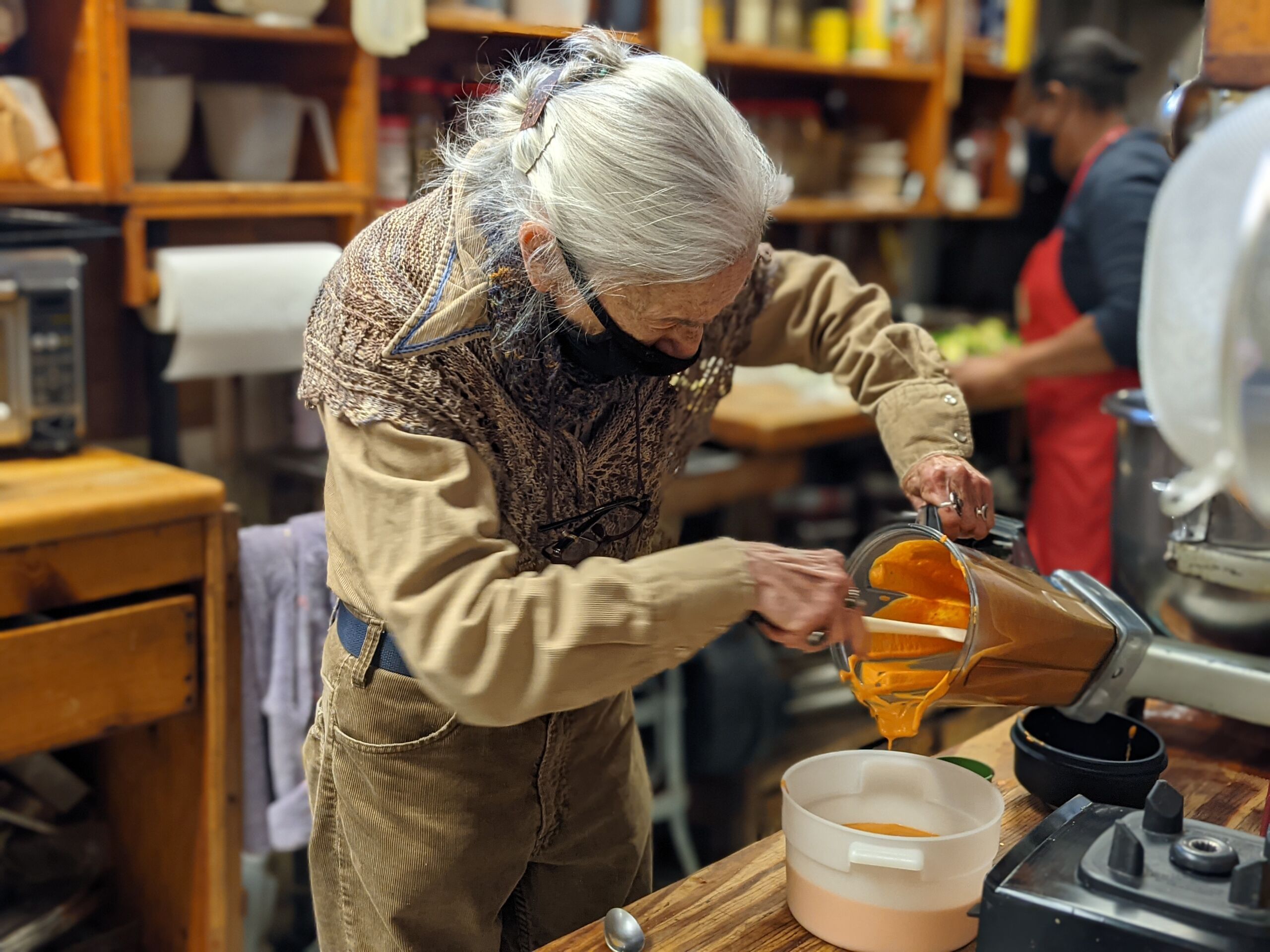 Since its early years, Bloodroot’s seasonal, ever-changing menu has focused on comfort foods from many cultures and countries. For example, the kitchen has served an array of soups from Puerto Rican sancocho to matzo ball (served around Passover) and Greek avgolemono. In recent years, Bloodroot transitioned to a vegan menu; Miriam loves to experiment with recipes like cashew-based cheeses.

Cultural representation is also reflected in Bloodroot’s employees, along with the diversity found in Bridgeport itself. Some of their workers have been referred to Bloodroot from the Mercy Learning Center, a Bridgeport nonprofit providing literacy and life skill training skills to their students.

The staff at Bloodroot has included immigrants from Jamaica, Ethiopia, Honduras, and Haiti, and their kitchen experiences and personal ties to cooking have been folded into the restaurant’s menu. Their employee Carol’s Jamaican jerk dish is a very popular item. 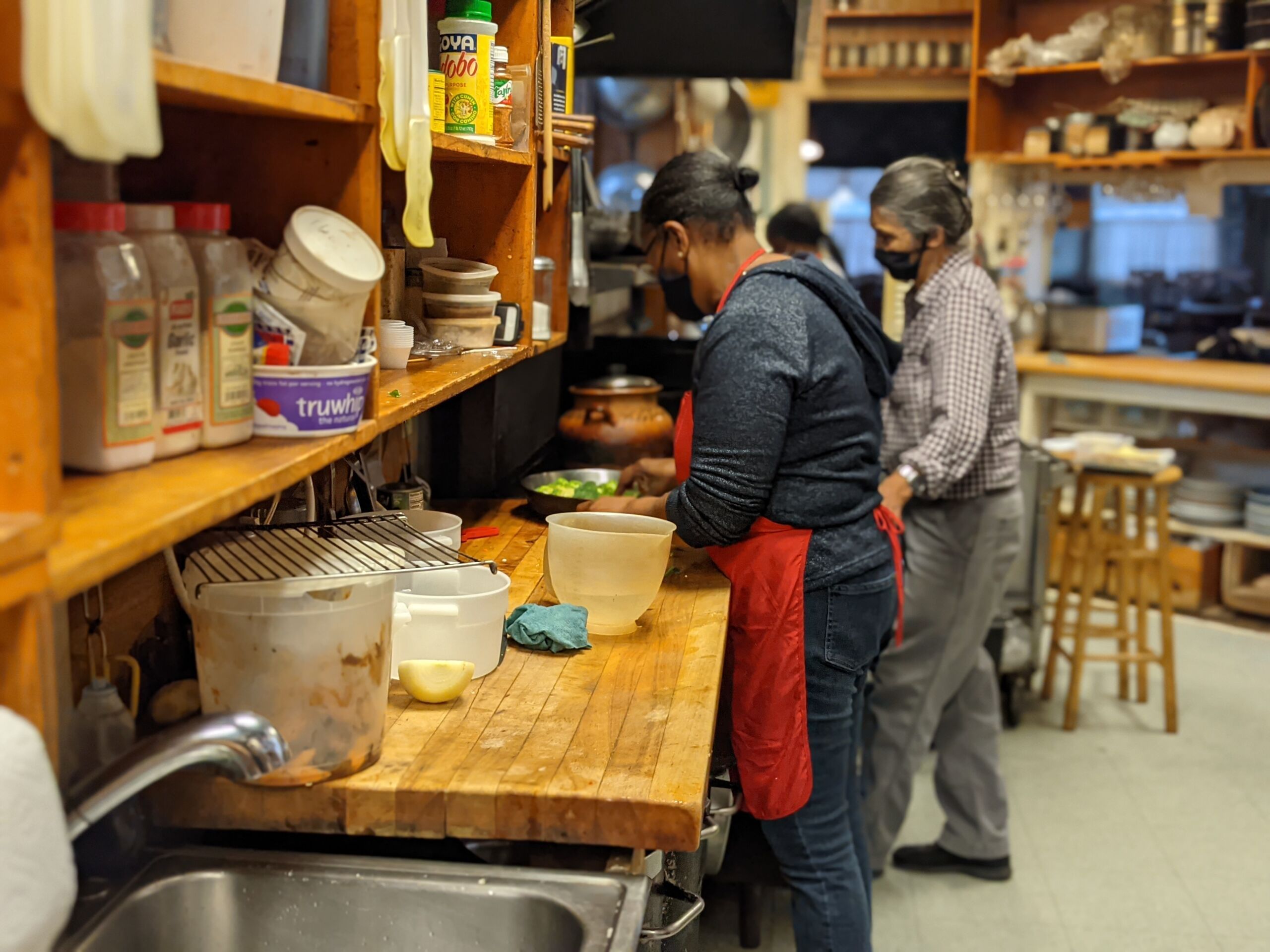 Over four decades, Bloodroot has continued to be a gathering place where women’s nights on Wednesdays were once held to encourage women including lesbians to dine comfortably and independently. While in the past Miriam and Furie have encountered male-related assumptions about their restaurant, such as their ownership, they continue to receive business and support from male customers. “And we’ve always had men who have come in, and they’ve been really very good friends to us,” said Miriam.

Bloodroot also functions as a bookstore. Located to the far left of the kitchen and dining room, this literary space is stacked with novels by female authors — among them Aimee Molley’s The Perfect Mother and Madeline Miller’s Circe — along with books focused on feminist politics and a section for books by and for women of color. A short flight of stairs leads to an elevated platform where most of the books are packed onto bookshelves; just below the staircase, plush wingback chairs await any guests who want to sit comfortably while they flip through a book or two. 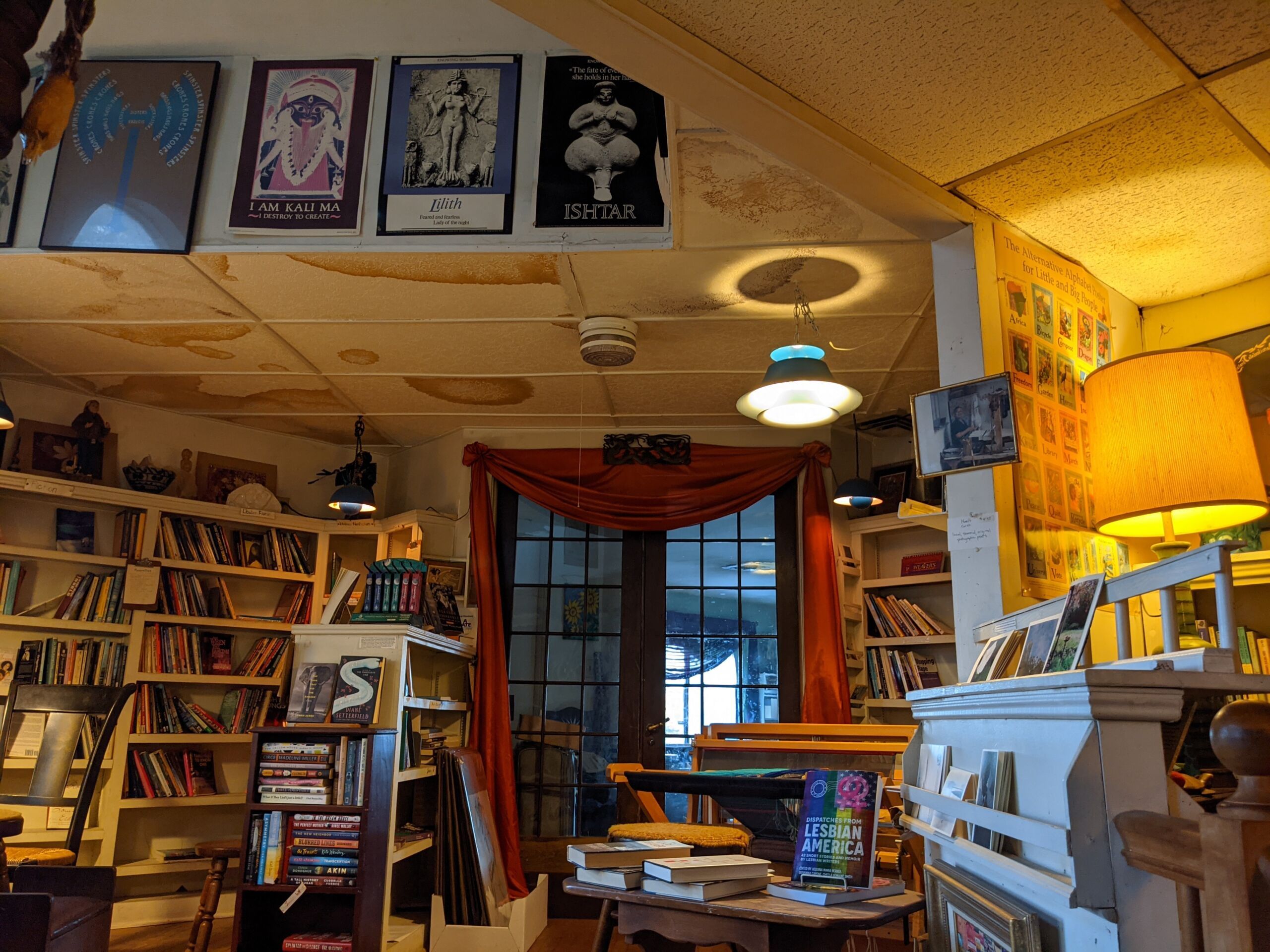 The bookstore’s best-sellers are Bloodroot’s cookbooks, including 2018’s The Bloodroot Calendar Cookbook and The Best of Bloodroot. A personal letter from one of the restaurant’s fans — feminist writer and poet Adrienne Rich — is also displayed in the bookstore.

COVID-19 has changed some of Bloodroot’s operations: The restaurant offers takeout and limited seating on an outdoor patio dining area. The restaurant has a long history of holding events that center feminist politics, which have also been put on hold due to the pandemic. In the past, Bloodroot has hosted guest speakers such as radical feminist philosopher Mary Daly, and cooking classes and art exhibits organized in timing with their 40th anniversary in 2017.

Despite the fact that the pandemic has slowed some of Bloodroot’s more radical and political work, its legacy and activism is well recorded: In 2010, Selma and Furie donated their records — including old letters, business documents, and event flyers — to Yale University Library in New Haven, and in 2019, Miriam, Furie, and Bloodroot were the subjects of a Douglas Tirola documentary screened at the SFFILM Festival.

Feminism has come a long way since Miriam and Furie opened Bloodroot, but they also acknowledge that there’s still more work to be done. Furie notes that the issues of racism, white supremacy, and social justice are still rampant in society today. She added that although she and Miriam support causes such as Black Lives Matter, they “are not in a place anymore” where they can go out to a march (Furie is now in her 70s; Miriam is in her 80s). These days, their involvement in activism mainly manifests through their connections and conversations with customers at the restaurant. Miriam, in particular, will spend time discussing politics with folks who come in to eat the restaurant.

“We’re very clear about where we are and who we are. And we’ve got our opinions. But we make sure that [with] everyone who walks in the door, I say welcome, and I mean it,” said Miriam.

How To Partake in the Jaw-Dropping Outdoor Experiences Around New Haven, Connecticut