If you’re looking for the ideal destination to watch the March Madness college basketball tournament, look no further than these sports bars in the beating heart of Bloomington – otherwise known as “B-Town” to locals. March Madness will kick off soon this Sunday, March 13th. The First Four games will take place in Dayton, Ohio at the UD Arena starting on March 15th. 68 teams are set to face off in 14 tournament venues located in cities such as Portland, San Antonio, and even Indianapolis in the Hoosier state. After fighting their way to the end, the national champion will be crowned at the Caesars Superdome in New Orleans, Louisiana on Monday, April 4th;  Gonzaga, Kansas, Arizona, and Baylor have a decent chance to take home the sought-after title of the 2022 NCAA Division Ⅰ Men’s Basketball Tournament Champions. Bloomington, Indiana sports bars are sure to show every single game.

Indiana is known for being the basketball-loving epicenter of America. James Naismith invented the sport of basketball in Springfield, Massachusetts in 1891, however he made it a point to say that basketball really had its origin in Indiana, which continues to have an affinity for the sport. Last year, Indiana’s historic basketball venues hosted the entirety of the NCAA Tournament, as the cities of Bloomington, West Lafayette, and Indianapolis hosted rounds of the tournament. After hosting these massive NCAA tournament matchups, it’s no surprise that Bloomington, which is home to the Indiana University Hoosiers, is still riding a March Madness high. And one thing is for sure: the Hoosiers love nothing more than their game days.

Indiana University fans regularly gather at these Bloomington, Indiana sports bars to watch the state’s famed college basketball teams play, and during March Madness the energy that fills these bars is unmatched. Most of these bars are family friendly too, so you can watch the games with kids in tow. Bloomington, Indiana sports bars offer some of the best selection of game day foods like wings, burgers, fries, and even some Midwestern favorites like cheese curds. There’s also craft beer from national, regional, and local breweries on tap. Come on down to B-Town and grab a seat at these storied sports bars. You’ll leave invigorated by Bloomington’s basketball spirit, full from all of the delicious food, and feeling welcomed by all of the friendly faces. But no promises that your March Madness bracket will still be intact when you head out. Here are seven Bloomington, Indiana sports bars to check out. 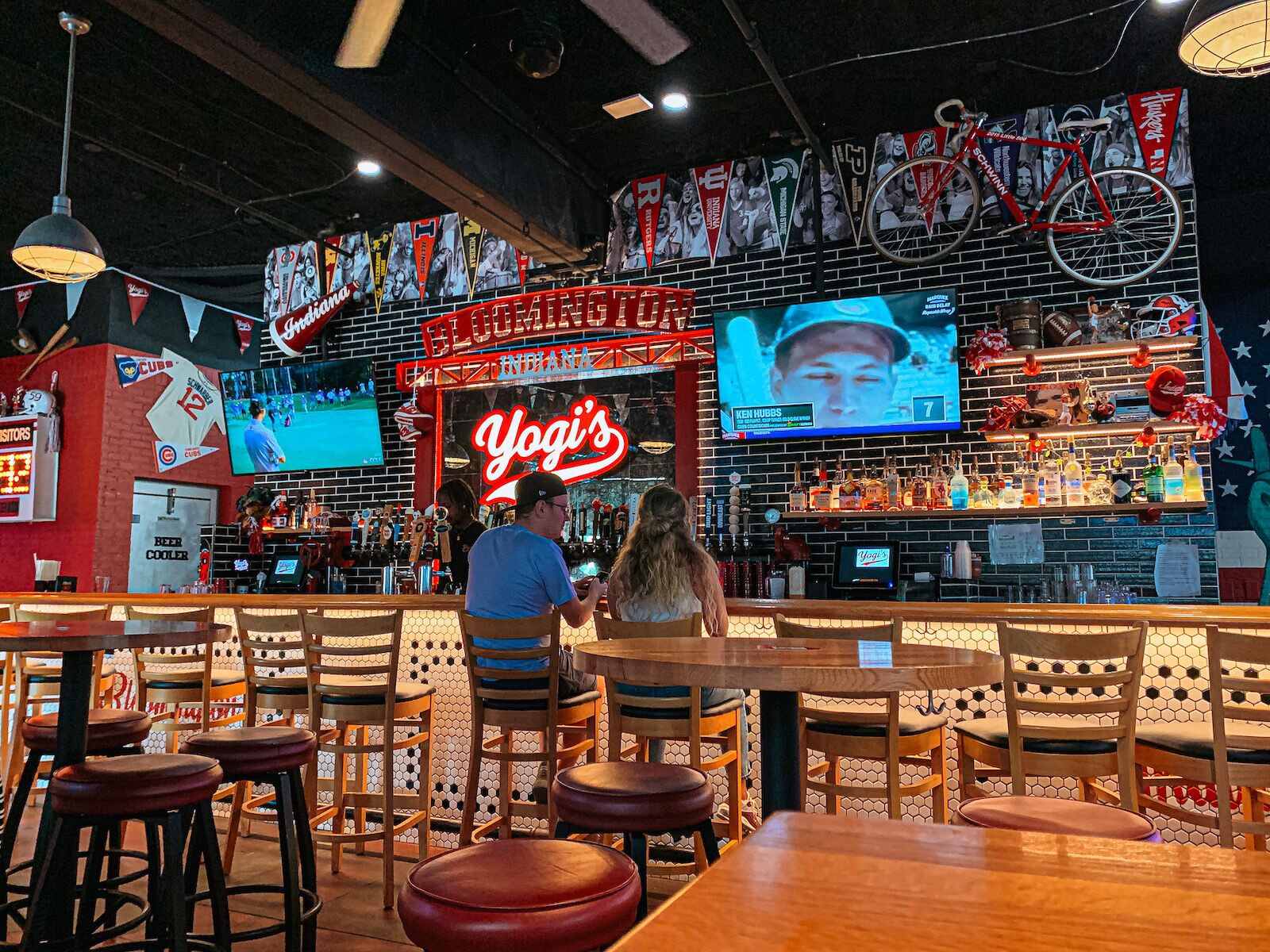 Yogi’s is a modern, hip hangout for all sports fanatics. In Yogi’s there’s no shortage of screens where you and your friends can watch March Madness games, as there’s a TV playing a different game every square inch. Yogi’s not only caters to the college student fanbase — on game days they have both 21+ seating and room for some family fun. Make sure to check out the wall signed by IU players and coaches and order some fried food favorites like the mini corn dogs, the Fry Flight that comes with four signature sauces, and the fried cookie dough. The IU sports memorabilia that hangs on Yogi’s walls offers an eye-catching sports history lesson. Look out for the red-and-white NCAA championship banners, Yogi’s scoreboard, and the classic Indiana logo in big, bright lights.

At Crazy Horse, IU alumni pull up a seat at the expansive wooden bar. Open to all ages before 9pm (and 21+ after that) Crazy Horse is a dive bar that is steeped in Hoosier tradition. The bar showcases plaques of the names of people who have taken part in the “Around the World in 80 Beers” tradition, where patrons have to down 80 of Crazy Horse’s beers from their entire beer selection within 6 months. Try their B-Town wings and pick from a variety of house-made sauces. 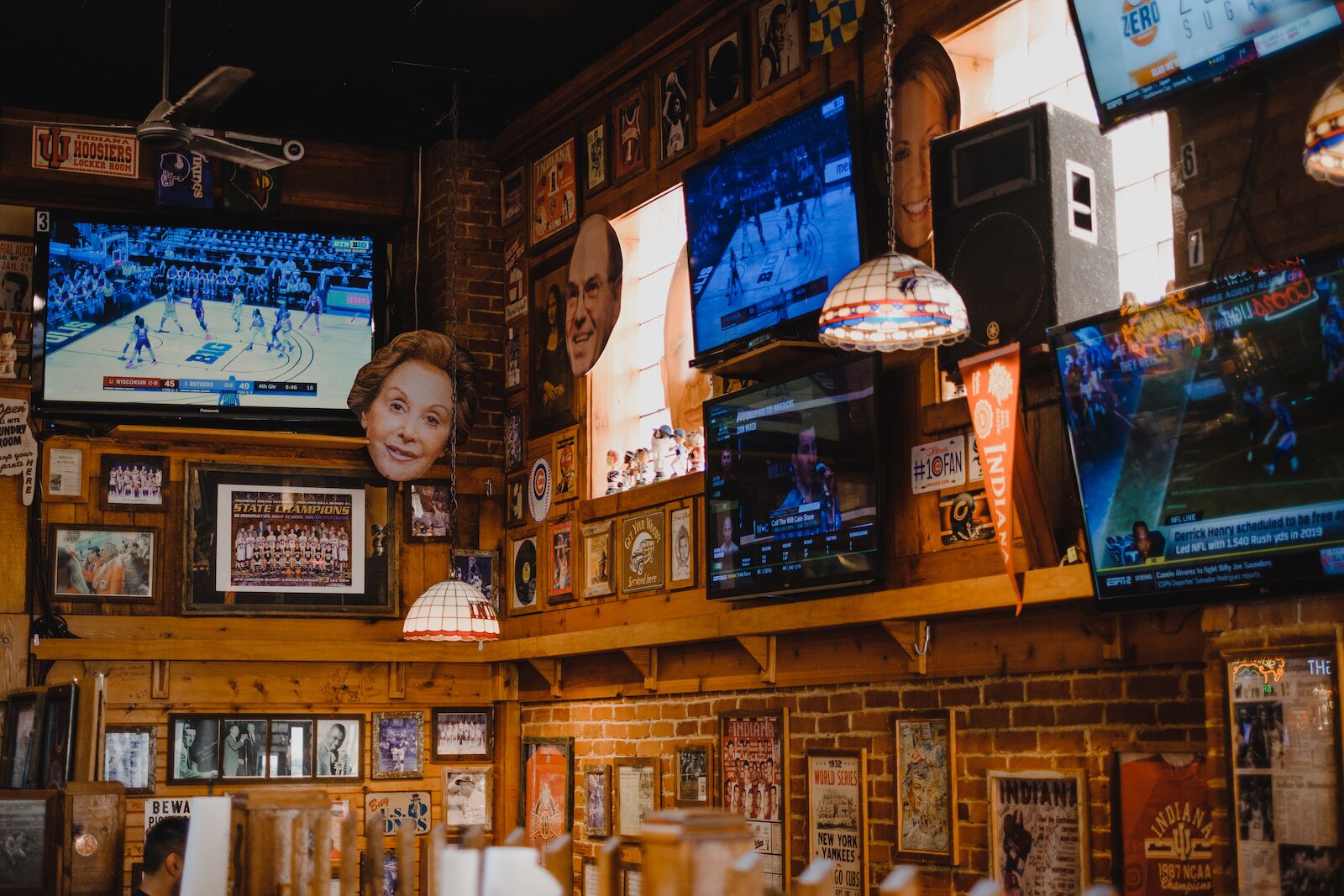 March Madness fans would be remiss not to check out one of the most iconic restaurants in Bloomington: BuffaLouie’s. Housed in the historic Gables Building, BuffaLouie’s is filled to the brim with IU basketball memorabilia. From signed Hoosier gear to team photos to murals with sports figures, there’s no shortage of basketball-related decor on the walls. BuffaLouie’s has long wooden benches that seat families on game day while munching on the bars legendary wings. 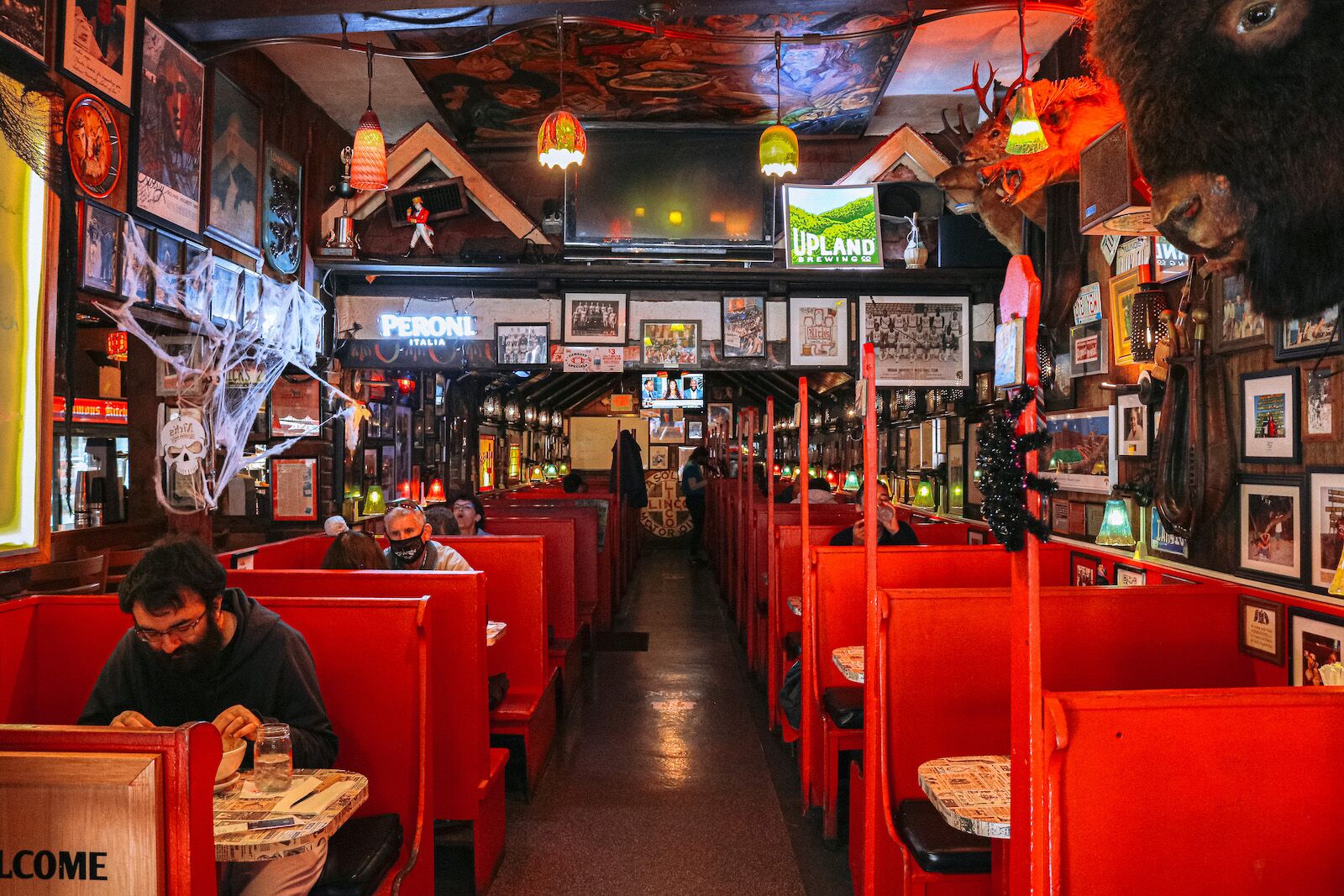 The holy grail of Bloomington sports bars, Nick’s English Hut has been an Indiana University tradition since 1927 where students, alumni, fans, prospective college students, and just about everyone else flock to on game days and take in the lively atmosphere. Consider this bi-level sports bar your one-stop shop—dine at the bottom and party up top. The bar on the upper level is 21+ and the restaurant on the lower level is family-friendly. Before grabbing a drink and watching the basketball games upstairs, order one of Nick’s signature strombolis and pair it with their Biz Fries (bonus points if you Sink the Biz).

Kilroy’s on Kirkwood (aka KOK or Kilroy’s) is the go-to party spot on game days. The bar’s outdoor patio offers an ample amount of space to celebrate. Kilroy’s caters to a younger college crowd, but if you’re looking to be transported back to your college glory days, look no further than this bar. Order Kilroy’s famous stuffed breadsticks that are filled with gooey Mozzarella cheese and pepperoni and served with a side of marinara and cheese sauce. 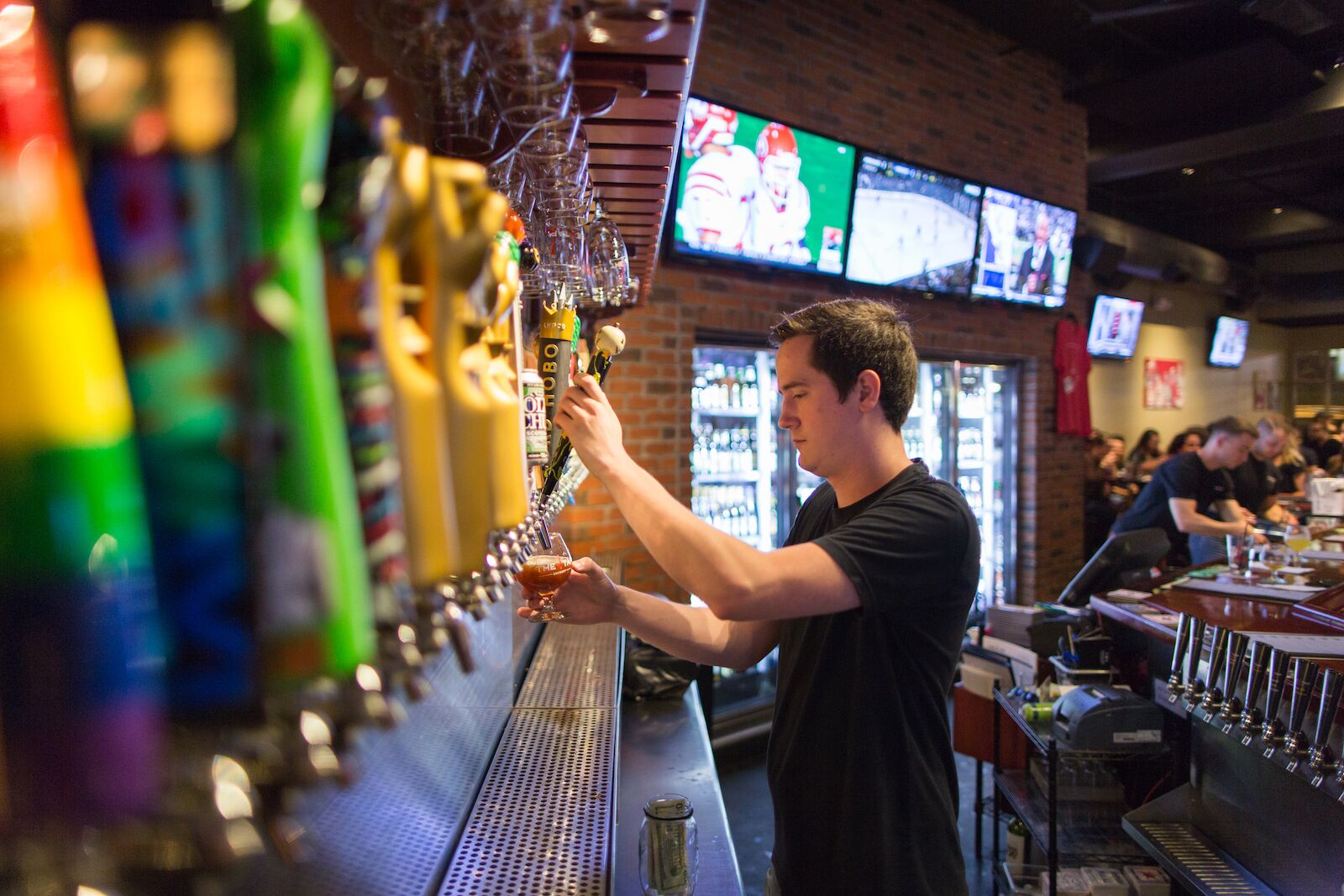 This brewery & craft beer bar on Bloomington’s downtown square has a more laid-back atmosphere than some of the bars on Kirkwood, but don’t underestimate its ability to draw in a rowdy sports crowd. The Tap’s flat screens in their upstairs brew pub are almost always tuned to the sports channels. Chow down on their selection of pub grub, such as burgers like the Beer Cheese burger with house-made beer cheese that’s served with Tap fries and their parmesan garlic aioli dipping sauce. Wash it all down with some of the bar’s 450 beers, more than 15 of which are brewed in their brewery just downstairs.

Located above a Jimmy John’s, The Upstairs Pub is the bar that gets the award for the best bird’s-eye view of game day. The Upstairs Pub is Kilroy’s next-door neighbor and it has one of the best balconies in Bloomington, perfect for relaxing and sipping your beer while you take in the sight of other sports fans flocking down Kirkwood and a prime view of Sample Gates. Play some games while watching March Madness match ups, including darts, pool, and you can even try your shot at a basketball-themed arcade game.

Airports + FlyingThese Airport Bars Will Almost Make You Want To Miss Your Flight
Tagged
Food + Drink Restaurants + Bars
What did you think of this story?
Meh
Good
Awesome

A Weekend in Bloomington, Indiana