Grabbing a stool at an airport bar generally means selecting an overpriced, watered-down cocktail or a short pour of wine from a sticky laminated menu. That might not sound appealing but anyone who has ever taken a flight knows sometimes it’s necessary; after rushing through security and lugging your bags to the right gate and terminal, there’s nothing you need more than to sit down with a beer or a glass of wine before your flight departs. Thankfully, bars around the US are upping their game, crafting enticing cocktail and wine menus, offering local beers on tap, and serving tasty bites to go along with upscale beverage options. If you’ve ever celebrated arriving at the airport on time with a flute of champagne or said ‘cheers’ with your friends with a shot before settling in for a long flight, these sophisticated bars will be an oasis in the midst of the usual hustle and bustle of the airport. Here are some of the best airport bars in the US that will make a long layover or pre-boarding jitters a more pleasant experience. 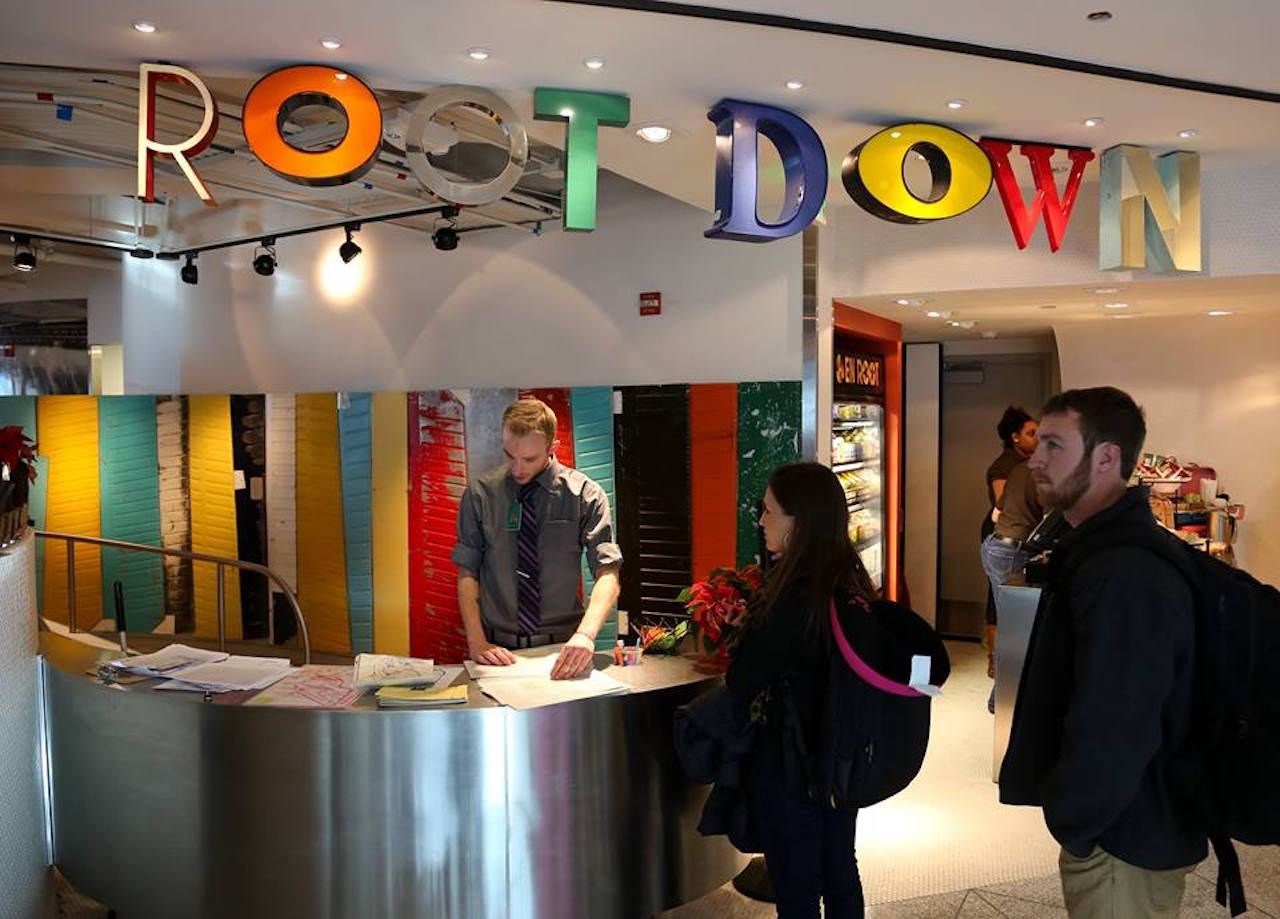 The first thing you’ll notice at Root Down is the custom glass-topped bar top jetting out from the wall. Look through the glass and you’ll see individual compartments fitted with open suitcases adorned with clothing, jewelry, accessories and other curios from different eras. The vignettes are designed to be a snapshot in time to communicate the imaginary story of a traveler who used that luggage.

“It completely elevates the bar experience… communicates in a deeper level and somehow elicits an emotional response to go deeper into the human experience all the while being sociable,” says Justin Cucci, the owner of Edible Beats, the hospitality group that runs Root Down.

Inspired by Japanese Zen Buddhism, you’ll find sushi on the menu at One Flew South, a high end restaurant and bar. The sushi bar is constructed from pink marble and the floors from heart pine, both native to Georgia. The cocktail menu has an interesting too: It’s theme is “Salute to the Aeromarine,” a reference to Aeromarine Airways, which “carried wealthy passengers from Miami to Nassau and Havana aboard flying boats (‘Floatplanes’) so that the guests could drink legally during the Prohibition era,” according to the restaurant’s website. You’ll find an eclectic mix of drinks here, using ingredients like pineapple rum, chili liqueur, and cinnamon-turmeric syrup.

Offering charcuterie boards and flights of local wines, Uncork’d is a modern wine and beer bar that offers travelers a classy experience amongst the chaos of the airport. There are California craft beers on tap as well, alongside bigger bites like sliders, pizzas, and sandwiches. 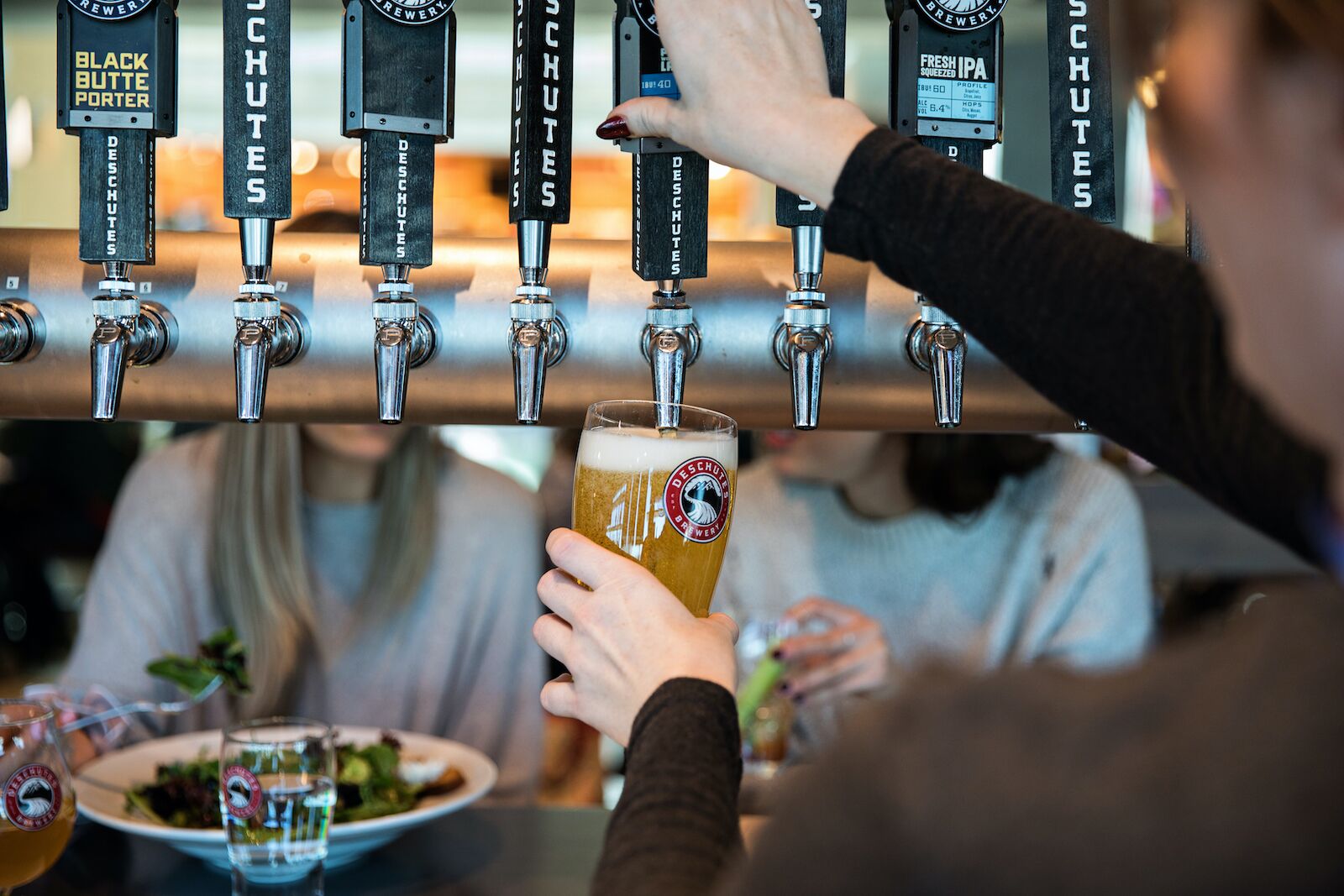 Bring a beer home for a friend from this Portland-based brewery, which has an outpost in the Portland International Airport. The cozy atmosphere features a digital fireplace and around 15 beers on tap – plus it’s cheaper than most airport restaurants and bars: 20 ounce beers cost around $6. There’s also a full cocktail menu on offer, which includes four variations on the classic Moscow mule, made with ingredients like giant syrup and jalapenos. 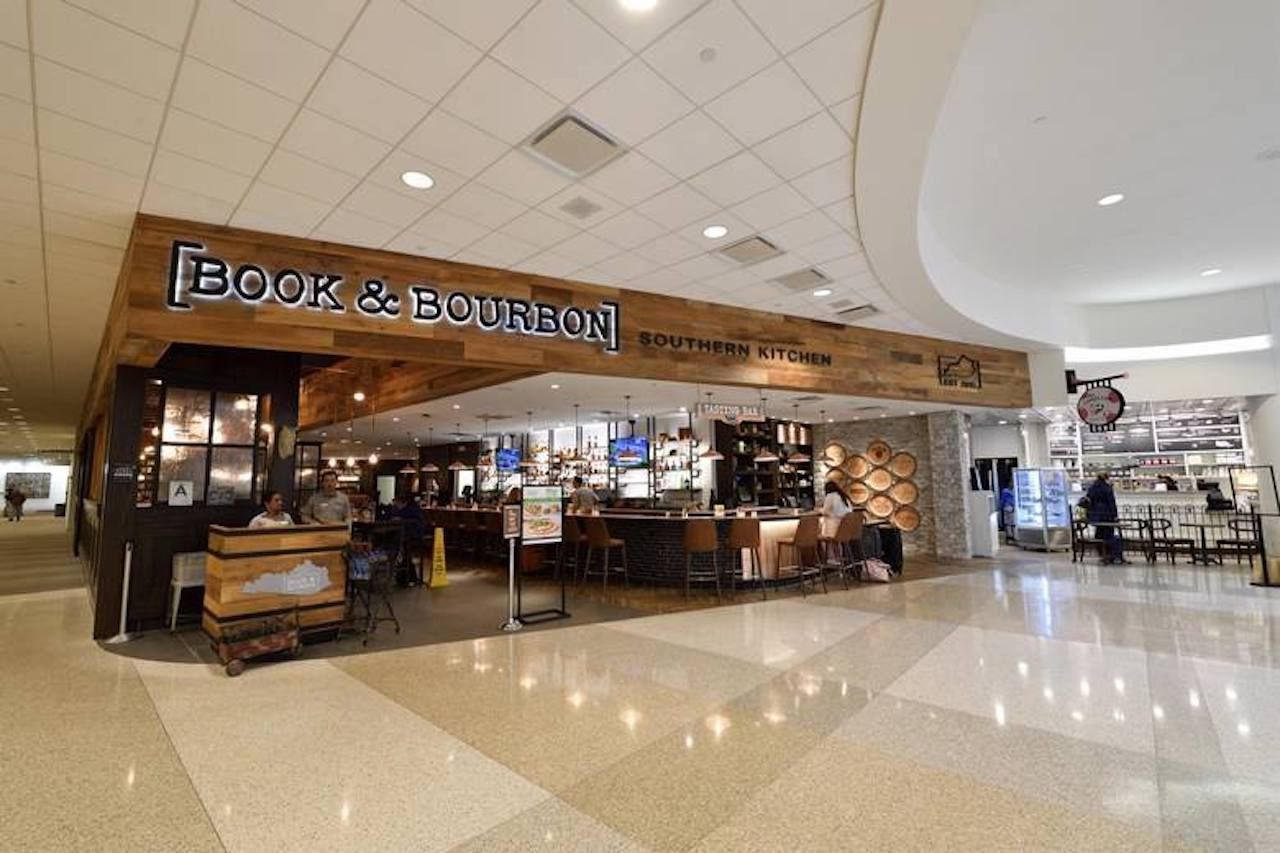 If you flew into Louisville, chances are you came to sample the bourbon. Whether you need a little something to quench your thirst right when you touch down or you already miss the native corn-based whiskey before you even leave, you’ll love perusing the list of more than 85 bourbons. The list at Book and Bourbon Southern Kitchen includes rare labels like Pappy van Winkle and Jefferson’s Presidential Select. Sit on a stool next to walls adorned with barrel heads from iconic brands and sip one while enjoying a buttermilk chicken sandwich. As for the “book” part of the moniker? The bar’s menu touts tasting notes, a primer on distillation and aging, while library cards let imbibers brush up on whiskey cocktails at home. 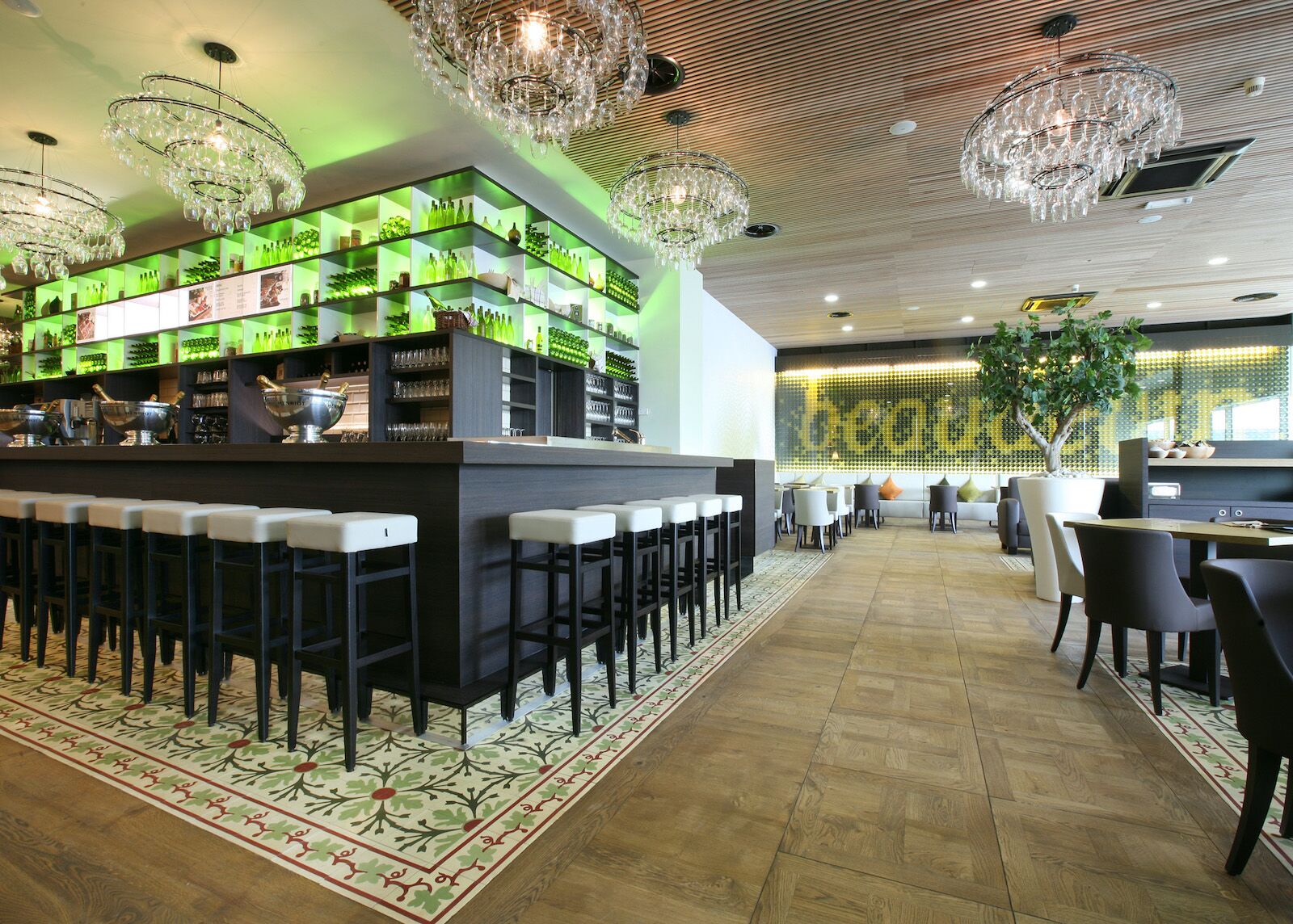 This sophisticated wine bar counteracts the busy airport atmosphere. Offering a list of around 30 different wines, an elegant selection of small plates that include dishes like smoked salmon and melon and prosciutto, Beaudevin hopes it evokes a “chateau cellar.” It was also Entrepreneur Magazine’s 2013 Business Travel Awards winner for Best New Airport Bar.

Vino Volo wine bar offers domestic wine selections from California, Oregon, as well as international wines from France, Italy and Australia. Wine flights are on the menu, and travelers can purchase a bottle to take on board. 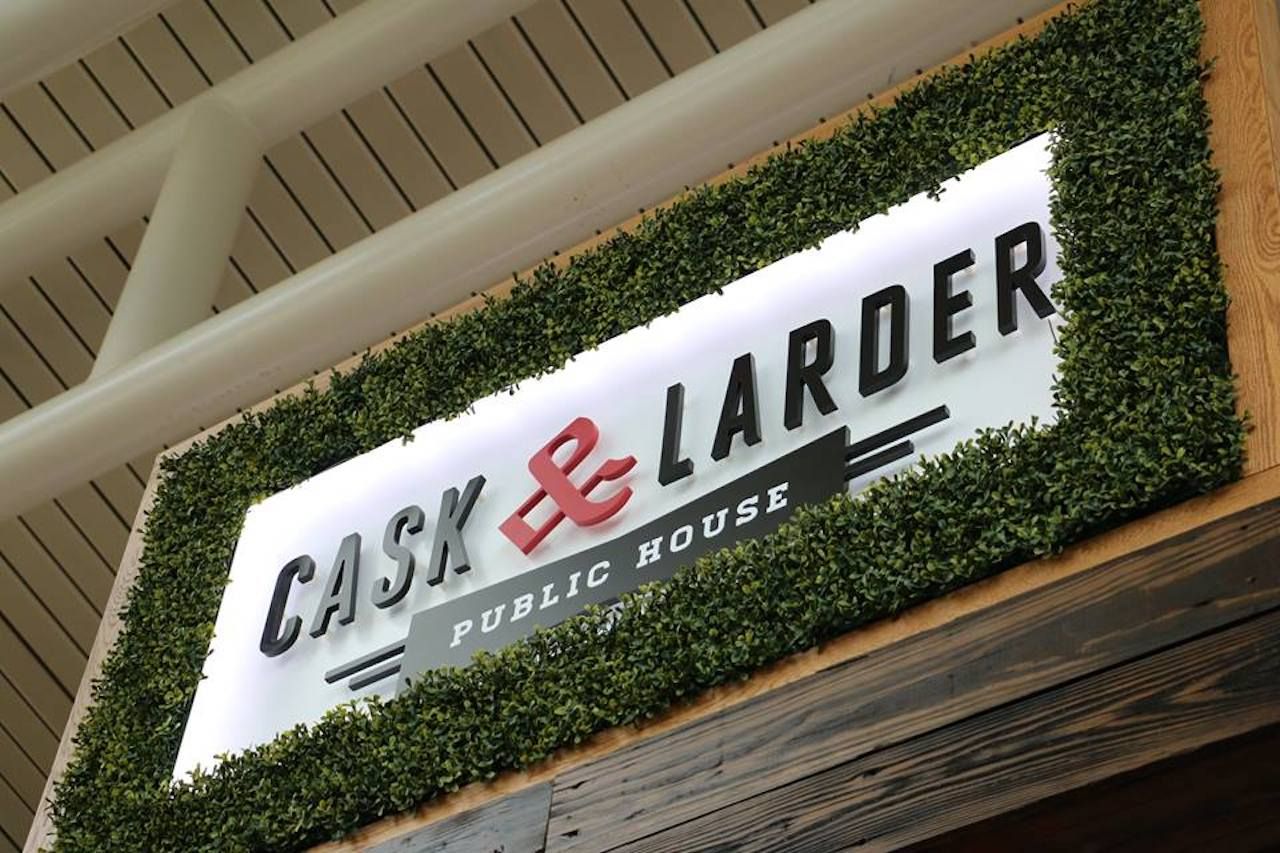 A 6,000-square-foot space on Airside 2 with a 220-seat dining room, grab-and-go market, and two bar areas gives travelers lots of room to spread out. Though the name Cask & Larder may make you think it skews heavy on whiskey, the menu really has something for everyone. There are Gotham Project wines on tap, proprietary drafts, and fresh cocktails like the Gin & Jam and a Moscow mule riff made with lemonade. A Shot and a Wash section of the menu serves up an ounce of a spirit with a half pint of beer while Stubborn sodas are cane-sugar-based zero proof options. Use any or all of the above to wash down a Southern-inspired menu of conch hush puppies, shrimp and grits, and pimento cheese.

This is not the place to go for a cheap drink at JFK airport, but you will find solid opportunities for people watching at Le Grand Comptoir, alongside an extensive wine list. Pair your glass of wine with a simple snack like a bowl of olives or a cheese plate, and relax before the flight attendant calls your boarding group.

Going on a long-awaited vacation with your spouse or partner? Flying economy but want to feel like first class? Then Petrossian Caviar & Champagne Bar is the spot for you. Sip on bubbles like the refined frequent flier that you are, while enjoying a decadent bite of charcuterie, or smoked salmon. There are also around 20 varieties of vodka on the menu to pair with the caviar. The “caviar in the air” picnic pack includes caviar, blinis, and crème fraiche so you keep the sophisticated party going on the plane. 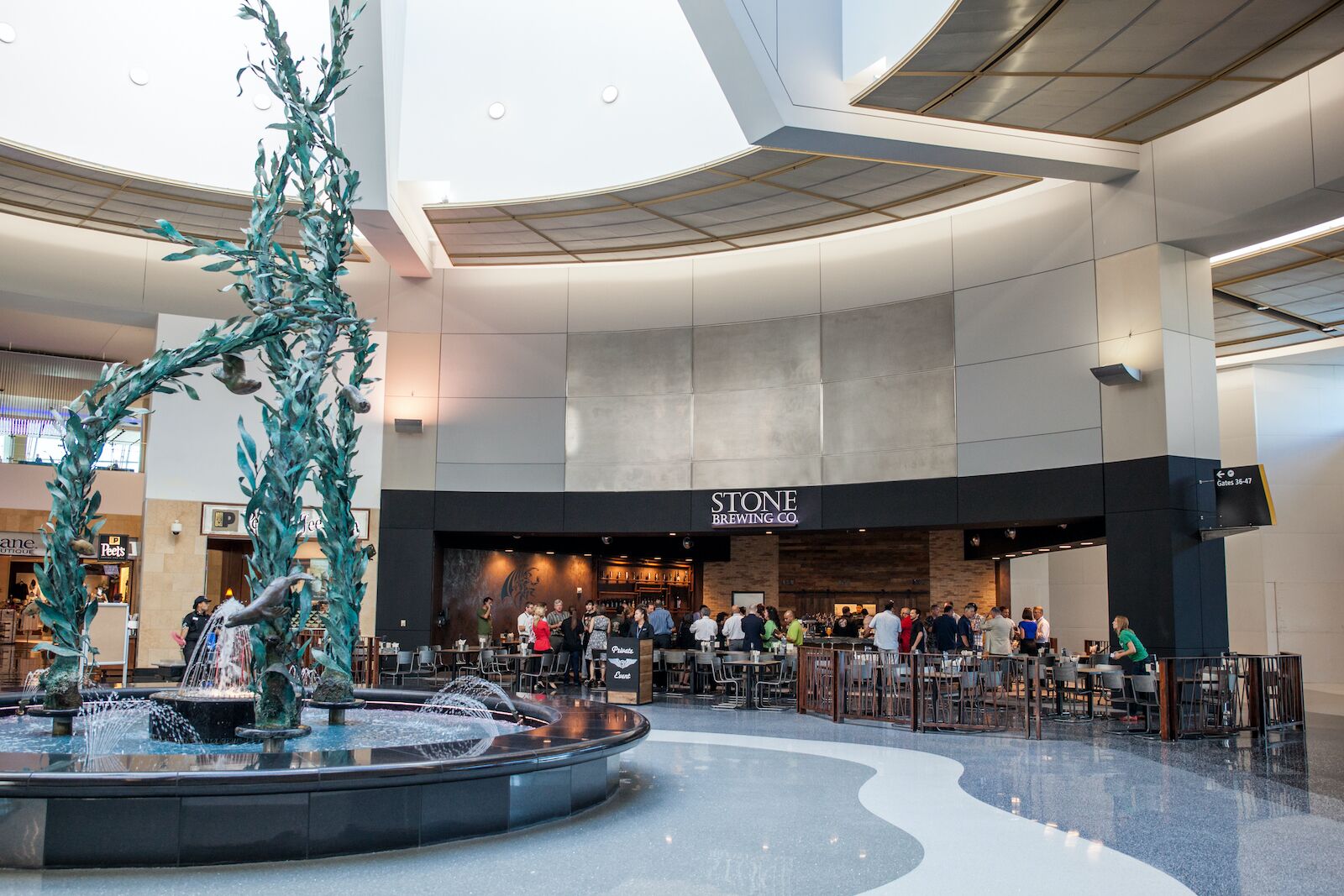 A “scaled down” version of the Stone Brewing Co. World Bistro & Gardens in Escondido County, Stone Brewing Co. is an elegantly appointed alternative to the many other casual bar options in most airports. There are twelve beers on tap, cocktails, and an array of snacks to tide you while you wait for your flight to board.

Airports + FlyingPhoenix Has the Best Airport Food in the US, and It’s Not Even Close
Tagged
Airports + Flying Food + Drink Restaurants + Bars Trip Planning
What did you think of this story?
Meh
Good
Awesome