Peanuts of all kinds were a constant presence when chef and Food Network Star contestant Martie Duncan was growing up in Alabama. This was in large part thanks to her mother, who was raised in Troy, Alabama, which sits along the co-called Alabama peanut belt.

During the state’s long, hot summers, one way to prepare freshly picked peanuts stands out: boiling them. Duncan still has her mother’s pot for boiled peanuts and recalls vacations where boiled peanuts were the star of the journey.

“I do remember driving to Panama City Beach, Florida, for vacation,” Duncan says. “We would start to look for the best boiled peanut stands once we passed Montgomery and couldn’t wait to get a bag of our own and an ice-cold Coca-Cola for the trip.”

She’s far from alone in the experience. Though boiled peanuts remain a relatively obscure food outside of the South, there’s no denying that they’re the perfect road trip snack.

Boiled peanuts are green or raw peanuts that are cooked in salted water for hours on end. For the unfamiliar, the texture can be surprising: squishy and loaded with whatever flavors were added to the pot. At Alabama Peanut Co. in Birmingham, owner Jaime Thursby describes them to people new to the style as Southern edamame — “when you say it’s a wet peanut that you boil forever, that doesn’t always translate,” he says.

That people in other parts of the US are more familiar with a crop from East Asia than a Southern staple that’s been around for hundreds of years may seem strange, but it works. I’m from California and went to school at Auburn University in Alabama. Auburn is not only where I tried boiled peanuts for the first time, but it’s also the first place I even heard this snack mentioned. It didn’t take long for me to become a fan.

Friends from Alabama, Georgia, and northern Florida introduced me to boiled peanuts on long weekend road trips. We’d pull over at a stand on the side of the road, or choose gas stations where we could pick up a large styrofoam cup of the goobers. The roadside association is a familiar one for people in the South.

“Like so many Alabamians, my memories of boiled peanuts are from taking road trips down to the panhandle as a kid and later Spring Break trips with college friends,” Thursby says. “We would always stop at that stand or old country store on the side of the road as we entered the Wiregrass region of the state. We would typically get just traditional salted but gosh were those things so good. Sometimes they were hot and sometimes cold, we didn’t care.” 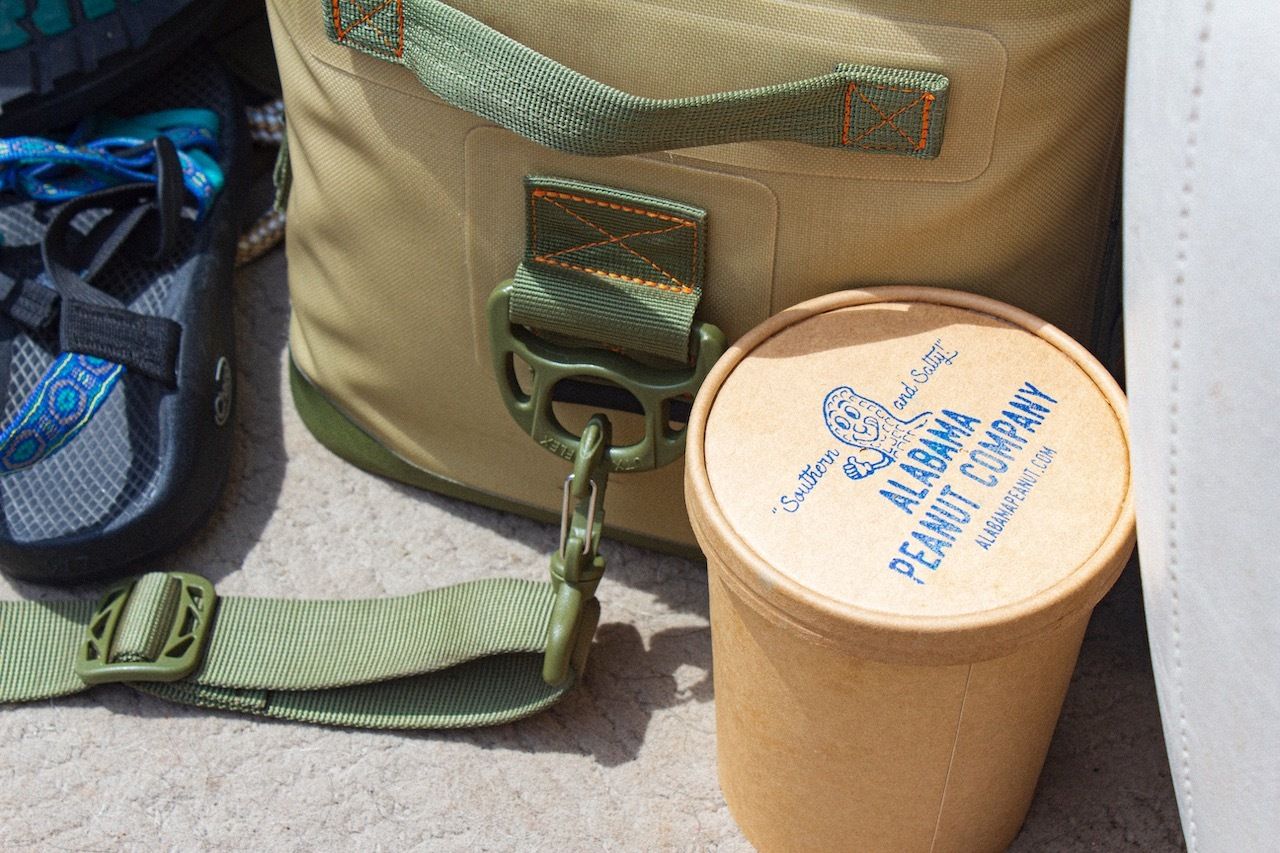 Peanuts have a long history in the South. It was once thought that peanuts came from Africa and were brought by enslaved people. It’s now known that though they were indeed brought to the US through the slave trade, the crop originally comes from South America.

Peanut plants need subtropical climate and chalky soils. Alabama has both, especially in the bottom half of the state. Alabama is also where the US fully recognized the potential of all that peanuts can do. George Washington Carver popularized more than 300 ways that peanuts can be used while at Tuskegee Institute (now Tuskegee University) about 40 miles east of Montgomery. In large part thanks to Carver, roasted peanuts became a favorite at baseball games, peanut butter became a classic for sandwiches, and peanut oil filled fryers not just in the South but across the country.

Today, more than 150,000 acres are dedicated to peanuts in southern Alabama. Dothan calls itself the “Peanut Capital of the World” because nearly half of the peanuts grown in the US come from a 100-mile radius of the town. It’s also the home of the National Peanut Festival — a 10-day event that takes place every year since 1938 except for 1945, 1946, and 2020.

There’s not a clear historical record of when boiling in salt became a standard preparation. Some sources claim it started with Confederate soldiers, though that ignores a long history (and previous mentions in newspapers) of boiled peanuts prepared by enslaved people on plantations. Thursby has done research trying to nail down the exact origin, yet it doesn’t appear to have been recorded. Still, there’s enough evidence to suggest Confederates were far from the first.

“African-Americans are the ones who pioneered boiled peanuts,” Thursby says.

There’s plenty of research to back up this assertion: Southern food writer Robert Moss tracked down a number of documents that hint that people ate boiled peanuts in the South before the Confederacy for Serious Eats. Moss found writings from 1754 and 1769 that note how enslaved people had plots of land dedicated to peanuts, and a physician wrote in 1849 that peanuts were widely used as plantation food in South Carolina.

One of the first published recipes for boiled peanuts was in the 1899 book Guide For Nut Cookery; Together With A Brief History Of Nuts And Their Food Values by Almeda Lambert. The early written records of boiled peanuts as a popular snack food across the South that Moss found, however, were in papers in south Georgia in 1911, Florida in 1917, and Alabama in the early 1920s.

Popularity waxed and waned over the decades, as food trends tend to do. There’s no denying the food’s continued place in Alabama cuisine though.

Today, boiled peanuts come in a range of styles and preparations. There’s the original salt, of course, and Cajun seasoning is another classic. Duncan sometimes opts for a squeeze of lime or the juice from Alabama pickle maker Wickles Pickles on top of straight salted peanuts alongside an ice-cold beer or tequila.

At Alabama Peanut Co., Thursby makes a range of rotating flavors with in-house seasonings, including options like Alabama Cajun, Tiki Teriyaki, Wickles Pickles, and Pineapple Lava made with a spicy pineapple juice.

“Peanuts saved farmers in Alabama,” Duncan says. “For that reason, if for no other, we should strive to keep peanuts in general and boiled peanuts specifically as an important part of our culinary legacy.”

Where to buy Alabama boiled peanuts 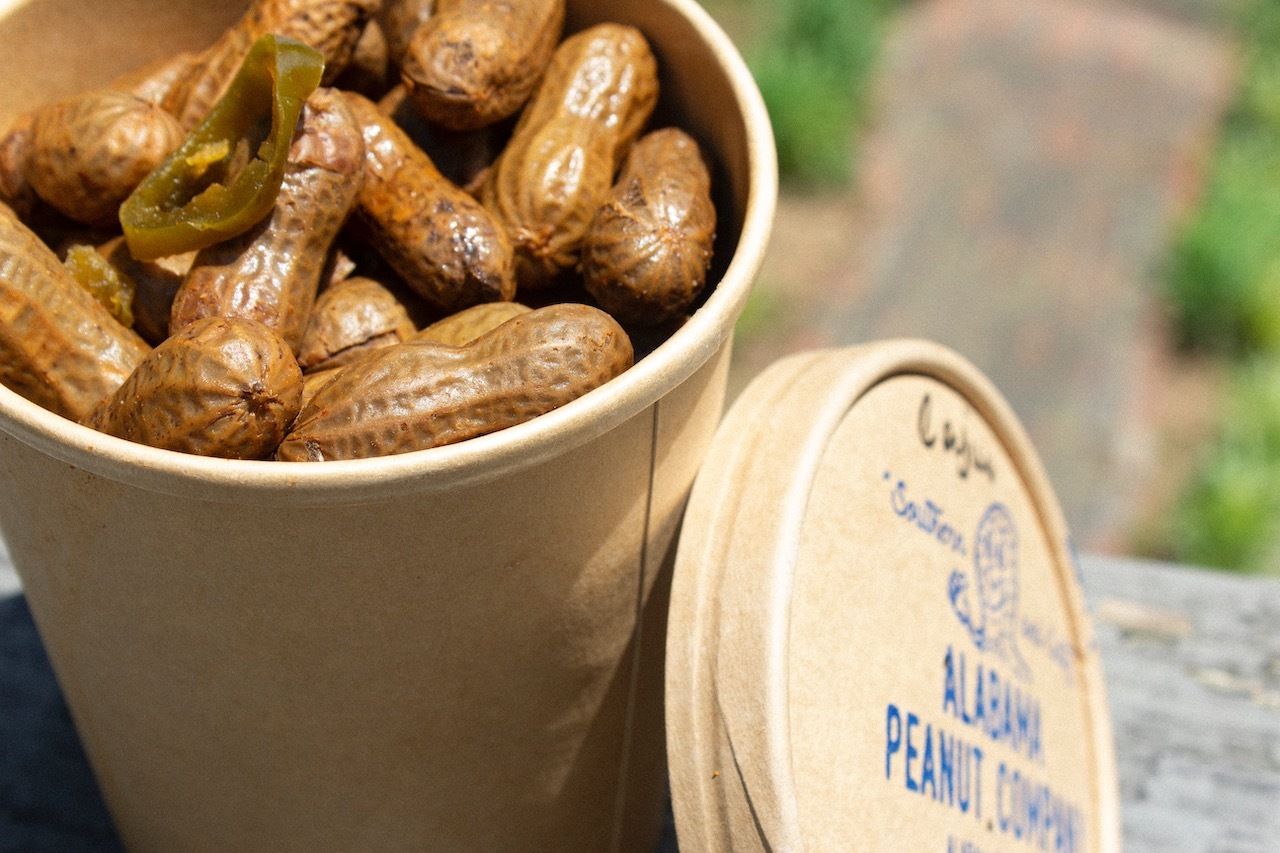 Boiled peanuts are like many of the best snack foods in that the best place to buy them is where you can find them. There are some places with an elevated style, however, as well as some tips on where not to purchase them unless you’re in a pinch and have a craving.

“You want someone who makes them fresh daily,” as opposed to in a mass-market peanut kettle, Duncan says. “And you don’t want them to be too soggy. Some of these places cook them until they are mush. You do want some texture to the peanut — that perfect blend of soft but not soggy, briny but not salty. I think the run-down shacks or little roadside produce stands have the best boiled peanuts. I am looking for someone cooking them in a big cast iron pot where they scoop them into a brown paper bag for you when you order them.”

Outside of the farm stands around Troy, Dothan, Enterprise, and Luverne, here’s where to pick up some of the South’s best road trip food.

Alabama Peanut Co. in Birmingham: Thursby opened up for business in a building from 1907 that used to be a peanut roastery. The shop has more than 130 different flavors that are rotated daily. It’s hard to beat stopping by the shop for a fresh batch, and Alabama Peanut Co. also has delivery trucks and boil-your-own kits for people outside of the South. In June 2021, the business will start to ship nationally.

Harold’s Cajun near Bay Minette: Find this little veteran-run boiled peanut trailer around Gulf Shores Parkway. “You will see his hand-lettered signs that read Hot Boiled Peanuts in big red letters,” Duncan says. “Turn around if you pass it. I normally go for traditional boiled peanuts, but I do like the subtle Cajun seasoning Harold uses.”

FestivalsAmerica’s First Mardi Gras Was Actually in Mobile, Alabama — and the Party Is Just as Epic
Tagged
Restaurants + Bars Road Trips Alabama, United States
What did you think of this story?
Meh
Good
Awesome

6 Places on the Alabama Gulf Coast You've Never Heard of (but Should Be on Your List!)

9 Ways To Totally Humiliate Yourself in Alabama

9 Things People From Alabama Can Be Proud Of

10 Phrases Guaranteed To Insult an Alabamian

6 Things the World Needs To Thank Alabama For

6 Things Alabamians Won't Tell You About Their State

America's First Mardi Gras Was Actually in Mobile, Alabama — and the Party Is Just as Epic