In the windswept mountains of the Scottish Highlands a keen eye might spot, in the vast treeless expanses, a tiny outcropping that is too angular to simply be a large rock. It’s actually the roof of a bothy. These backcountry lairs are favorite destinations, or stopping points along a longer trek, for lovers of wild nature and lonely places — as they can be quite secluded and accessed through a hard hiking trail. To travel to a bothy is to journey into some of the most remote spots of the Scottish Highlands. Here is what you need to know about bothies, and some of our favorites to visit.

What is a bothy? 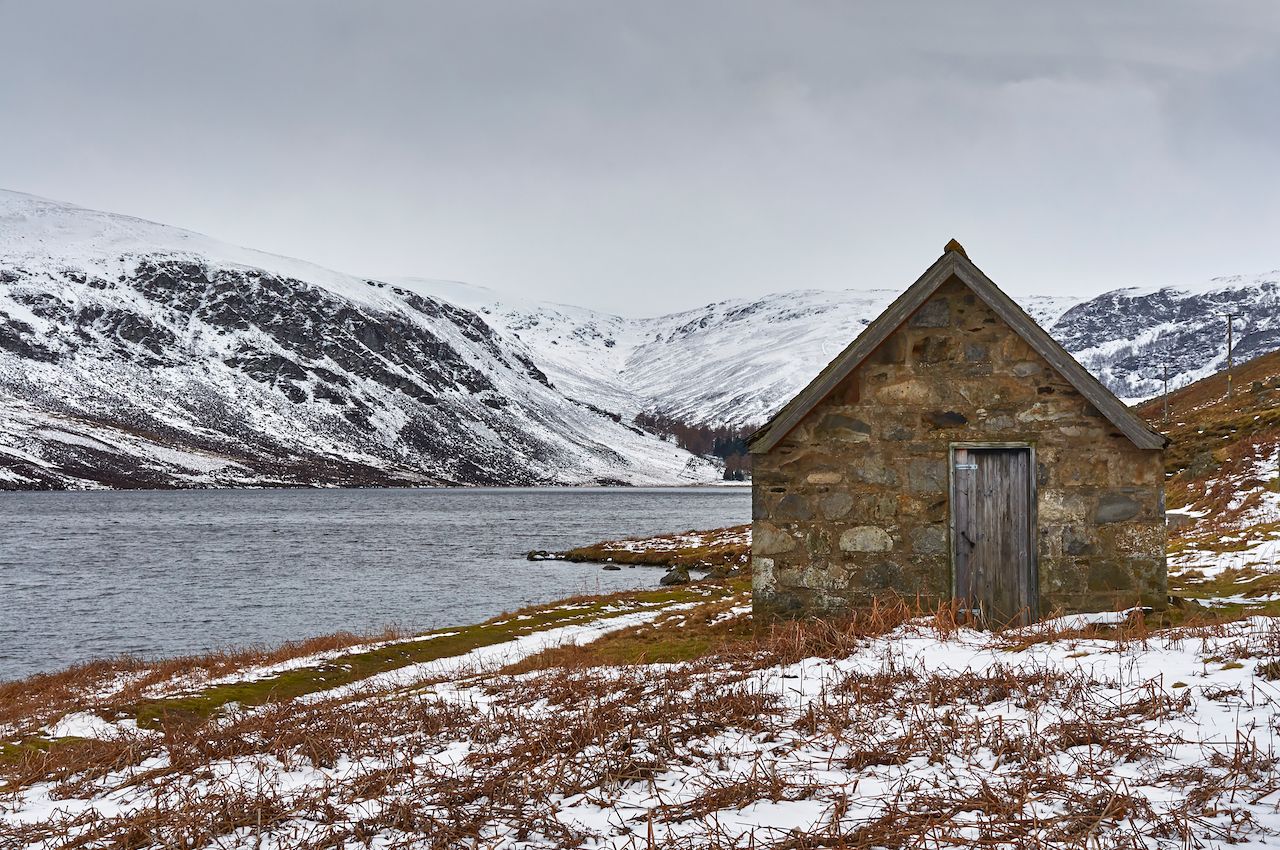 A bothy is a simple shelter found in remote areas of Scotland. Most are historic buildings restored to basic windproof and watertight standards, made available for the public. They are free to use although accessibility restrictions might apply depending mostly on the land usage, such as shepherding or deer stalking. Also, there is a code that’s expected to be respected, which amounts to just being clean and considerate. They vary in size, from small single-rooms to two-story cabins. They usually have the same common features: a designated sleeping area, either an upstairs space or a raised platform to minimize sleeping in cold spots; no available bedding, beds, or mattresses; a fireplace; and a spade for burying human waste, as few have toilets. By definition, bothies are reachable only by foot, cycle, or boat, and they’re typically located near running water.

As romantic as it sounds, though, most people don’t accidentally come across a bothy — that would be too much of a needle-in-a-haystack situation. In the past locals, primarily farmers or loggers, knew their locations, and in the present, hikers specifically aim for them by following maps. In fact, since its founding in 1965, the charity Mountain Bothy Association (MBA) oversees 100 bothies and their maintenance, offering detailed information such as locations and conditions.

While you can find some bothies in Scotland and Northern England, and even a few in Wales, Northern Ireland, and the Isle of Man. Predominantly, though, they’re found in the Scottish Highlands and are thus part of the local identity and the flair of the region.

How to prepare for hiking to the bothies 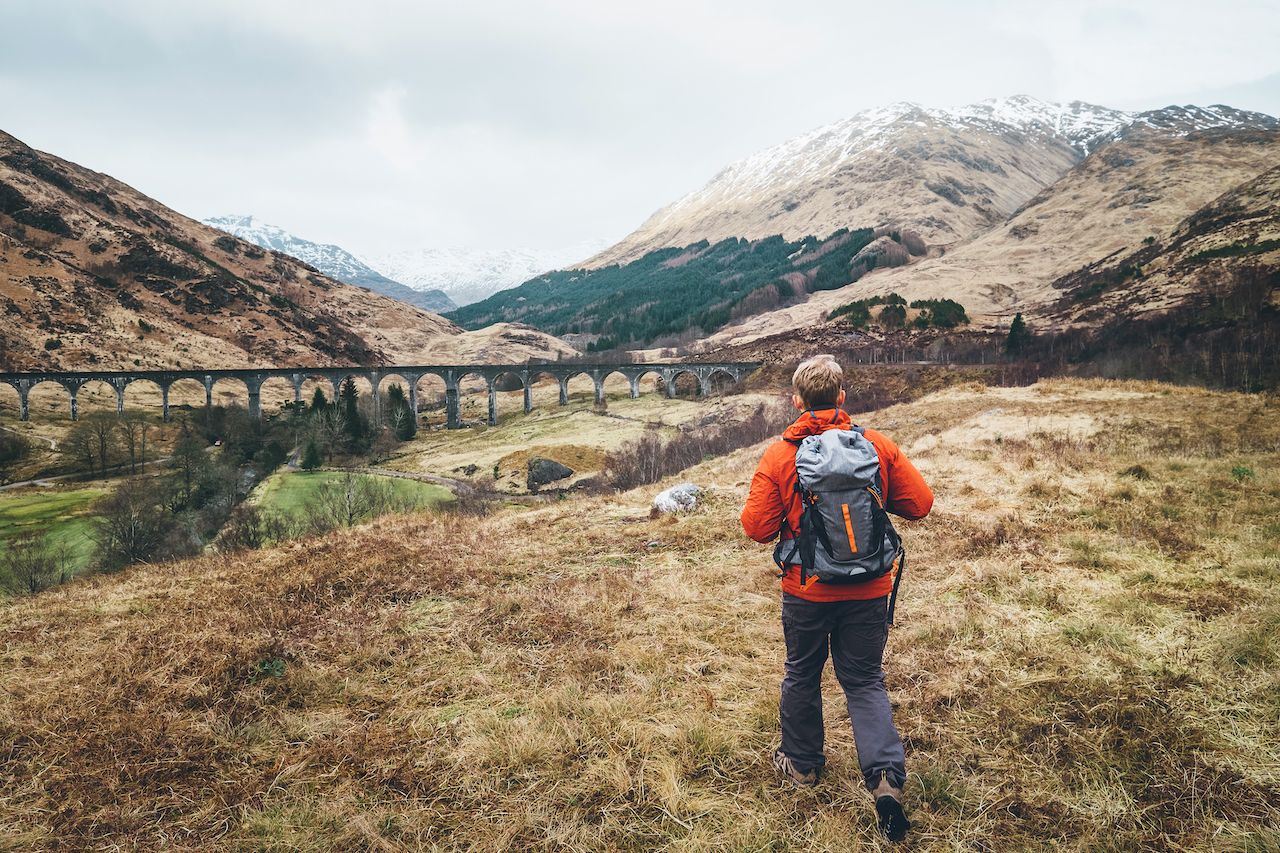 Bothies can be in remote areas far from people, services… and help. That’s the point. Therefore, no matter how long the trip is to reach and stop at a bothy in the Scottish Highlands, you need to be self-sufficient and ready to handle adverse and unpredictable weather.

Research the route you’ll hike to know the types of terrain and the conditions of the paths, as well as elevation gain. Keep an eye on the weather forecast, although this is a general indication as the weather might change unexpectedly. The best option is to layer with waterproof and insulating clothes. Layers can be peeled off as needed although it’s never really warmer than 70°F (21°C). Good hiking boots are a must, as you might encounter quite different terrain, from grassland to rocks to peat bogs and anything in between. Check Matador’s backpacking gear guide for a full list of what to bring.

Unknown to many is how common ticks and midges can be. Midge bites are itchy and usually painful. Ticks might carry Lyme Disease. Carry repellants, a head net, and tweezers. Tuck your pants in your socks. Check for the insects’ presence on or around you before picking a resting stop. Extra rations of water and food are always a good idea. Many hikers like walking sticks, but this is a personal choice depending on habit, fitness level, and route type.

As a reminder, once at a bothy, follow the Bothies Code.

Bothies to visit in spring and summer 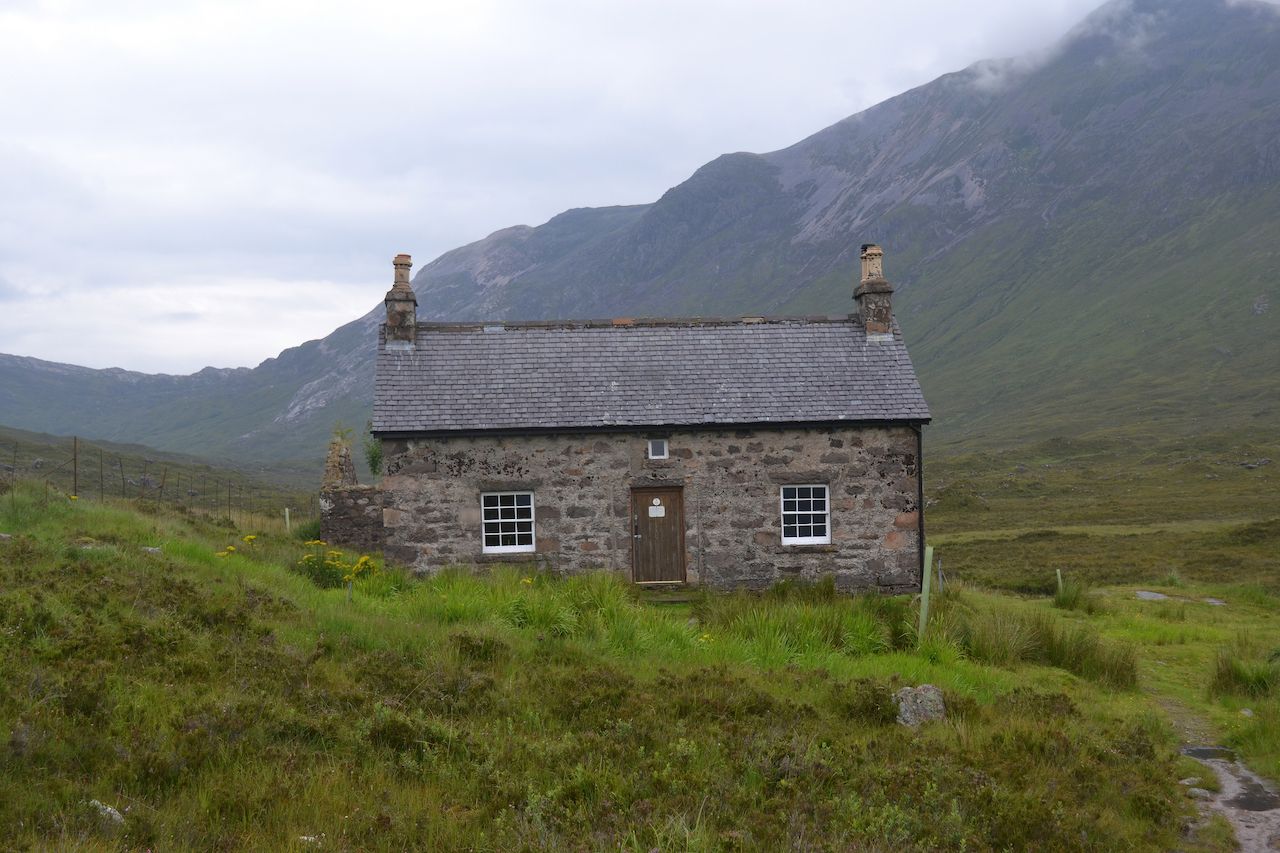 Here are some suggestions for journeys with varying difficulty, terrains, length, and bothies.

Ben Alder Cottage is not just a bothy in the middle of the moors on the shore of a loch. It’s also said to be haunted. To find out if that’s true, start from Rannoch Station along the West Highland Line railroad. A minibus takes you east along the narrow road (B846) to the trailhead at Bridge of Gaur, right by the eastern tip of Loch Rannoch. Head north. For the first half of the hike, the landscape is a mixture of views and elements as the undulating terrain has many thick spruce woods and granite-capped hills. You arrive at the southern tip of Loch Ericht where you can fish trout if you have time. Continue along the shore.

The view sweeps the length of the quiet Loch, its 14.5 miles (23.3 km) straight as a pin. Both shores rise gently, and the woods give way to sparse clusters of trees, the spruce’s pointy tops distinguishable now. More bare rocks are seen here among the fields, the grass dark brown or dark green depending on the season. The track ends but there is a clear trail to continue ahead, until you turn inland at a rocky knoll, or a small hill standing amidst flatter surroundings, called An Grianan. Shortly after, you’ll cross a little bridge over Alder Burn Creek, and you’ll have the bothy in sight, overlooking a small semi-circular bay. It’s a long, narrow, one-story building in two parts. The older, gray stone structure dating to 1871 is always open to the public while the dark timber addition is reserved. Access is never restricted. If you have caught any trouts, cook them over the campfire.

Start from Lochinver, a small village on the coast, and follow the narrow road straight east. It’s unlikely you’ll see any traffic. For most of its length it’s flanked with thick vegetation in trees and underbrush, and the area is quite lush. Once you’ve passed Loch Druim on your right, the path is well marked and continues east and slightly south. The gently undulating terrain here is of open moors swept by the Highlands’ ubiquitous breeze.

A sign marks the turn for the bothy. A single-story stone construction, it comfortably fits six people. The hike was simple but the reward is the south view towards Suilven, a contrast of dark shadows and bright grassy fields, as it’s always against the sun. Beyond the bothy, the terrain becomes more undulating and barren, rising up to the sandstone mountain towering over the area. The hike there is only 2.2 miles (3.5 km) but along a steeper trail and among bogs. Although not dangerous, this bothy usually attracts more experienced hikers and mountaineers — as the real goal for many, once at the foot of Suilven, is to actually climb Suilven.

The parking is at the western edge of Loch Arkaig, surrounded by brownish and green fields devoid of trees and no rocky sides. It looks all bumpy because of the tussocks, clumps of thicker and taller grasses that cover everything in sight. You’ll follow the River Pean valley on the north side but from the forestry access track higher up. There isn’t much color variety, but fortunately a big stretch of woods starts after a few minutes, and you’ll walk immersed in trees for most of the time, a rare occasion in the Highlands.

The route is easy until about 500 yards in when the track stops and you need to figure a way through roots, puddles, and tussocks. Always open, the 1870 bothy is small but well kept, with two rooms downstairs and some additional sleeping space in the attic. It’s not insulated, so it’s never warm inside but has plenty of firewood. The mountains rise steeply on both sides of the valley. Quite a few rivulets carve the green slopes on both sides. The south and west views are treeless but peaceful. It’s slightly less breezy here, or windier, depending on the season. With a little bit of mist the view gets eerie; even more if you’re lucky and see a deer drinking from the river below.

Take the 80-minute ferry ride from Mallaigh to Kinloch on the western coast of the Isle of Rùm, south of the Isle of Skye. The walk follows the only road on the isle, which eventually splits into north and south directions about halfway through the walk. Head north towards Kilmory. The isle’s name comes from the ubiquitous hue of dark red color given by the iron ore present in the rocks. The hue is pervasive also because the island has very little vegetation, just a layer of grass. The undulating landscape and little human presence make for an introspective hike. The perhaps monotonous island makes for even greater contrast upon reaching the small bothy as this place is a meeting point of completely different views and natural features. The bothy sits by a tiny crescent bay, the gentle slope ending by the pale gray pebble beach.

On both sides the terrain rises steeply, and the rugged coastline is marked by rough rocks covered in grass and moss. This makes for a constant roar — or “tumblin’ burn” as some call it — and in fact Guirdil’s name comes from the Norse Giùadal meaning “deep chasm.” On the horizon, the outline of the Isle of Canna stands high over the sea. The bothy is from 1848 and with the adjacent ruins was a crofting community. “Crofting” is a Scottish traditional social setup of small-scale food production particular to the Highlands, so integral to Scottish culture to have its own commission. The bothy is small but well kept, and a camping ground is available closer to the beach.