The siren song of the bottomless Mimosa is a strong one. Champagne! Until you can’t drink it anymore! It’s like you’re a Roman god minus the vengefulness. All you’re missing is a nymph feeding you grapes. And in some parts of Miami, you can actually do that too.

But much like $20 of free play at a casino or any trip you get from a timeshare, bottomless Mimosas aren’t done for your benefit. Like the Bernie Madoff of brunch, they bilk you out of your hard-earned dollars with the promise of infinite drunken riches and offer nothing in return but a head-pounding hangover.

The menu makes it look like a fantastic deal: You can order one Mimosa, and it’ll cost you $6. Or you can shell out somewhere between $10-$20, and you get them BOTTOMLESS! There is literally no bottom to your glass! The Mimosas never end!

Seems like a no-brainer, right? But let’s break it down for a second.

The bottles of Champagne used for your bottomless bubbly drinks might cost the restaurant $3 each, and it’s almost never actual Champagne. Instead, it’s a budget bubbly made in the US, or prosecco. (Upscale places, like your Zumas of the world, use expensive shit, but we’ll get to them in a minute.) Unless they’re leaving you the whole bottle to mix on your own, your Mimosa might get an ounce of this bubbly, of which there are 25 in a standard bottle of bubbly. That breaks down to 12 cents per Mimosa, plus the cost of orange juice.

You’d have to be an entire family of Andre the Giants with a taste for cheap André to even make a dent in that kind of profit margin.

To add insult to injury — or maybe just protect themselves from liability — some restaurants go so far as to limit how long you can sit there and enjoy your “unlimited” Mimosas. Which means it’s actually not unlimited but rather limited to how many you can down in 120 minutes.

That limit is further hampered by waiters who are about as eager to refill your Mimosas as they are to tell you which menu items have gluten. Not that you can blame the waiters. If you had to spend your Sunday dealing with drunk people who believe they’re entitled to as much bubbly as their livers allow, you’d wish unthinkable things on them too.

Like a New Year’s Eve open bar where they only staff two bartenders, the system is rigged.

Some restaurants offer bottomless Mimosas for free when you buy a brunch entrée. Which seems like a much better deal until you realize that brunch itself is a scam. 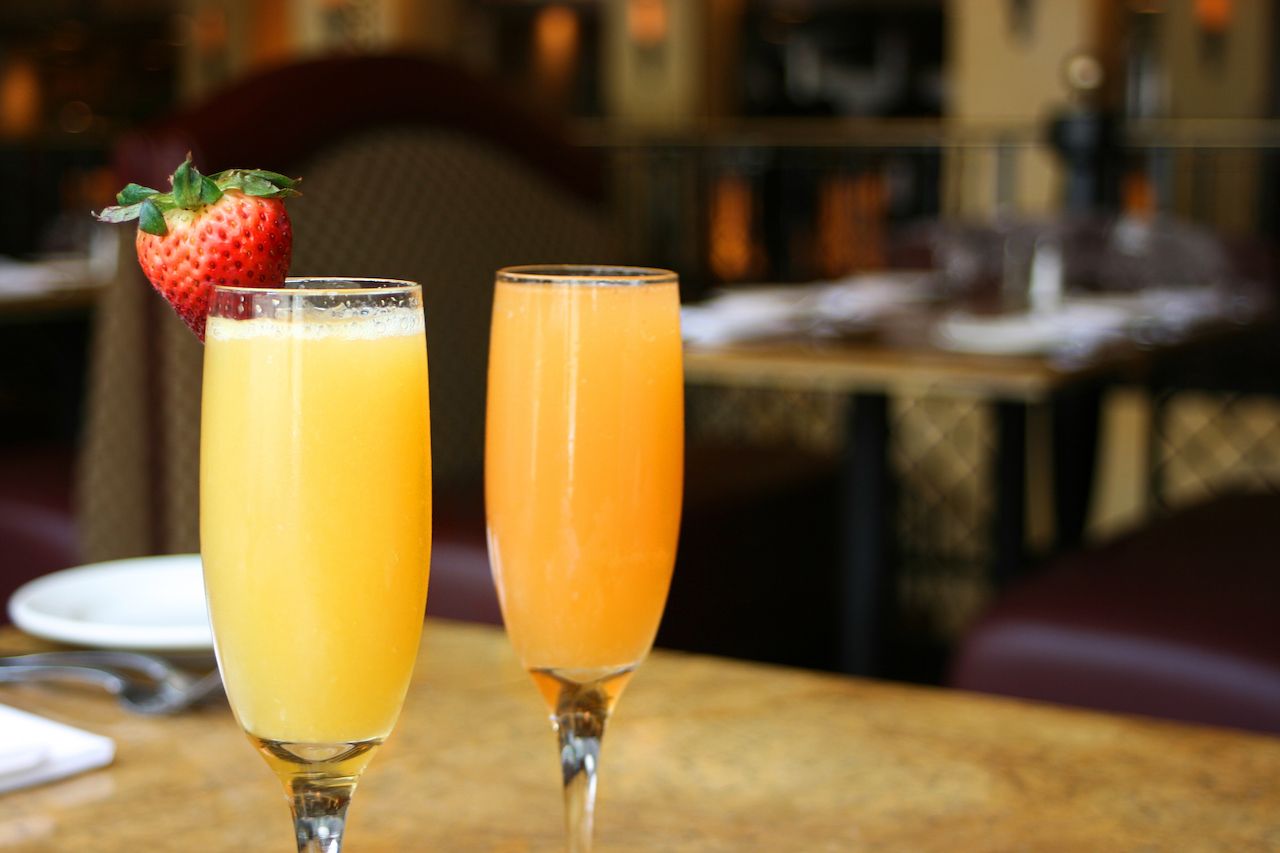 Brunch, for the unaware, is a massive cash cow for restaurants. The food is generally made with cheaper ingredients than dinners, and there’s a high margin on each dish. So even by giving away 12 cents worth of sparkling wine, they’re cashing in the gourmet garbage disposal that is a brunch menu. Even if someone does manage to consume enough Mimosas to make the bottomless price worth it, the Mimosas acted as a loss leader to get the person into the restaurant and purchase the higher margin food. Plus the unlimited Mimosas help you not realize the food you’re getting isn’t the restaurant’s best.

Fine-dining restaurants, like Zuma, offer Ruinart Champagne or, if you pay a little extra, Taittinger or something similar. This seems like a slightly better deal since you’re getting a sparkling wine that’s not available at CVS. But these brunches generally run about $100 if you upgrade the bubbly.

It’s not quite the scam that the cheap stuff is. But if you think you’re getting anywhere near a bargain by dropping the price of a round-trip on Spirit on a hybrid meal, you’re simply a sucker.

I understand small restaurants and mom-and-pops sometimes depend on brunch to break even in the brutal world of restaurants. And you can’t blame them for trying to make the most of booze-fueled logic. But like so many legal scams, it’s on us, the consumers, to figure it out and say no, thank you, I’ll just have a cocktail today (there are so many better aperitivi anyway that include actual liquor). Come Monday, you and your bank account will both realize it was the better decision.

Food + DrinkHow Early You Can Start Drinking at Brunch in Every State
Tagged
Restaurants + Bars Spirits + Cocktails
What did you think of this story?
Meh
Good
Awesome