The sunset-colored Aperol Spritz has become a symbol of summer, la dolce vita, and continental sophistication. The last decade has seen this aperitivo drink rocket in international popularity, thanks mainly to shrewd marketing campaigns by the Campari group that now produces Aperol. But while Aperol Spritz may seem to embody the very essence of Italian living, it is just one of a whole range of aperitivo drinks that were and still are popular across northern Italy. Aperol can now be found throughout Italy, but to try most of these other bittersweet drinks you need to visit the place of their invention.

It may come as a shock, but the original Spritz did not contain Aperol or any bitter at all. It was a blend of wine and a “spritz” of water. Many credit the origins of this to soldiers of the Austrian Empire in Austrian-occupied northern Italy in the 1800s, who added a spritzen of water to the highly alcoholic Veneto wines to make them more palatable. Of course, adding water to wine has been a custom since Roman times, but perhaps we can thank them for the name “spritz,” as the combination of water and wine has several different names throughout Italy. In northeast Italy, wine and water, or seltzer, without bitters is often still considered THE Spritz. Elderly people and traditionalists throughout the Veneto still opt for the Spritz Bianco rather than the younger Aperol Spritz. 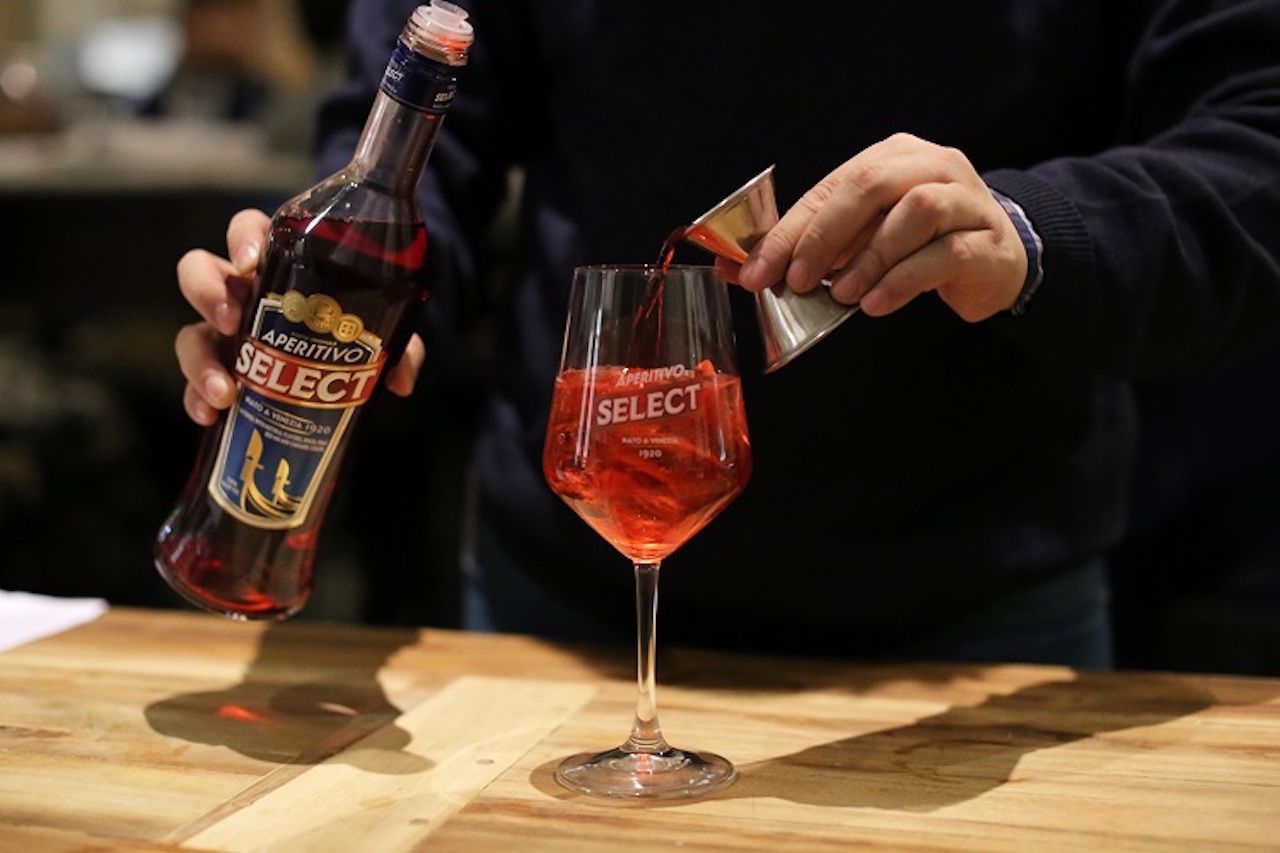 The Aperol Spritz is often thought to originate in Venice, but despite the drink being ubiquitous throughout bars in the city, Aperol was actually born in nearby Padova. Venice’s bitter of choice, instead, is called Select. It was created in Venice in the ‘20s by Fratello Pilla distilleries. It’s pinkish red and has a sharper, more medicinal taste than Aperol. But sometimes on a stifling summer day, you need something bitter to cut through the heat. One of the best streets for an aperitivo bar crawl is the Fondamenta dei Ormesini. If it’s sunny, sit on the steps of the canal outside the bars.

Lombardy, too, is an aperitivo-loving area, and its drink of choice is the Pirlo. At first glance, the Pirlo seems very similar to the Venetian Spritz but its key difference is the use of flat white wine rather than Prosecco. The wine is mixed with sparkling water for the fizz, and Campari (originally) or Aperol (a later fashion). It is drunk as the accompaniment to apericena, Lombardy’s version of aperitivo, which features a much more extensive buffet than that of aperitivo including hot meat dishes and pasta. With its substantial food options, the apericena has become a popular way to have a cheap dinner. In fact, due to the quantity of food, bars have also begun to offer a Pirlone, a big or double Pirlo so customers don’t have to come back for drink refills so often. 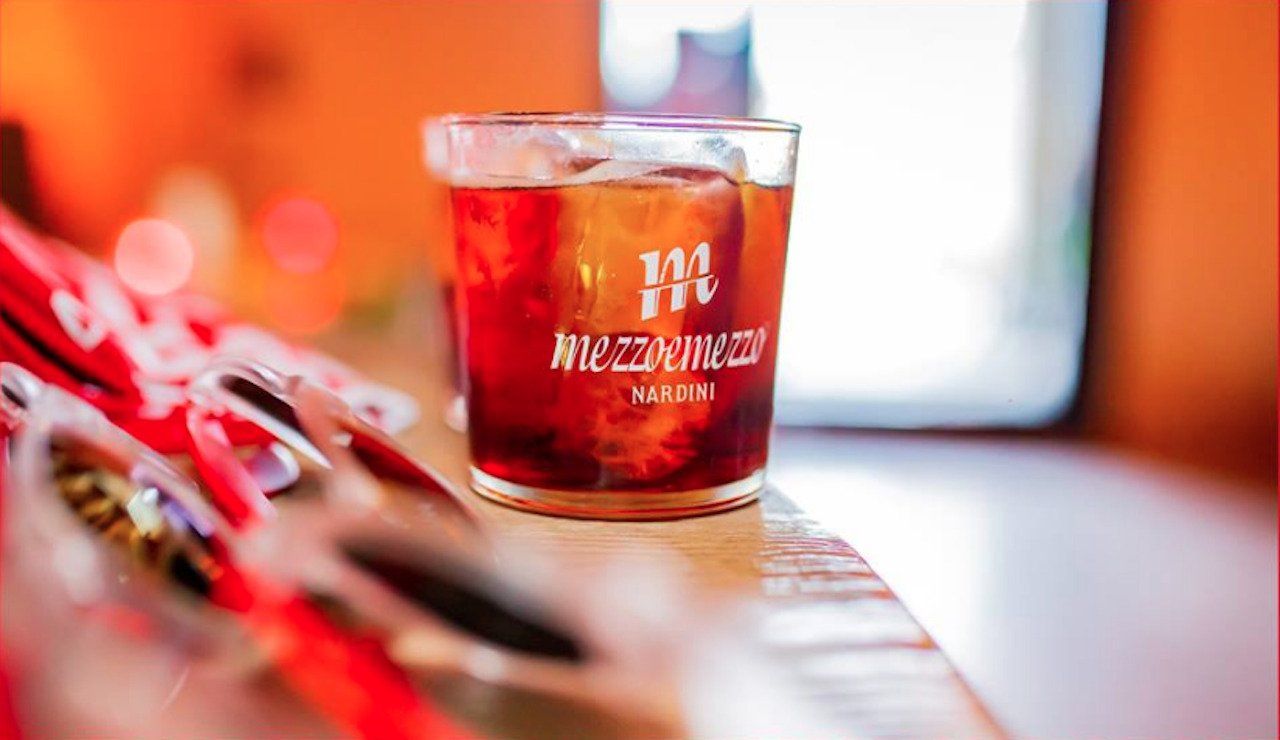 Aperitivo drinks are also a lot more diverse than just different versions of spritz. Bassano del Grappa, a town in the north of the Veneto region, is famous for its Palladio-designed wooden bridge spanning the Brenta River. But come evening, you’ll find the bridge packed with people who are not admiring the engineering, but are drinking Bassano del Grappa’s local aperitivo. The Mezzoemezzo was invented by Bar Nardini, an unassuming venue sitting at one end of the bridge. This “half and half” drink is made from one part Nardini’s Rosso (a bitter orange liqueur) one part Rabarbaro (an amaro made from rhubarb), two parts cold soda water, and a lemon twist.

At aperitivo hour, a typically chaotic crowd line up for their drinks inside and outside of Bar Nardini, and the bartenders work with mechanical efficiency as they place glass after glass of aperitivo on the wooden bar. Part of the experience is to elbow your way back outside to the wooden bridge and drink as you watch the sunset over the river.

Carlotto’s is another historic bar with its own unique aperitivo. The bar has no seating, just a long wooden counter topped with shelf after shelf of bottles of their products. The walls are decorated with faded striped wallpaper and vintage publicity posters from the ‘20s and ‘30s. Its classic drink is the Biancorosso, a herb-based bitter produced by Carlotto Liquori since the ‘20s. It is poured from a large bottle that sits on the counter and it is served in little tumblers. It also has a sweeter, summer option, the Biancorosa, which is stored in wooden casks. Despite being intended for hot summer days, it still has a powerful kick of alcohol. 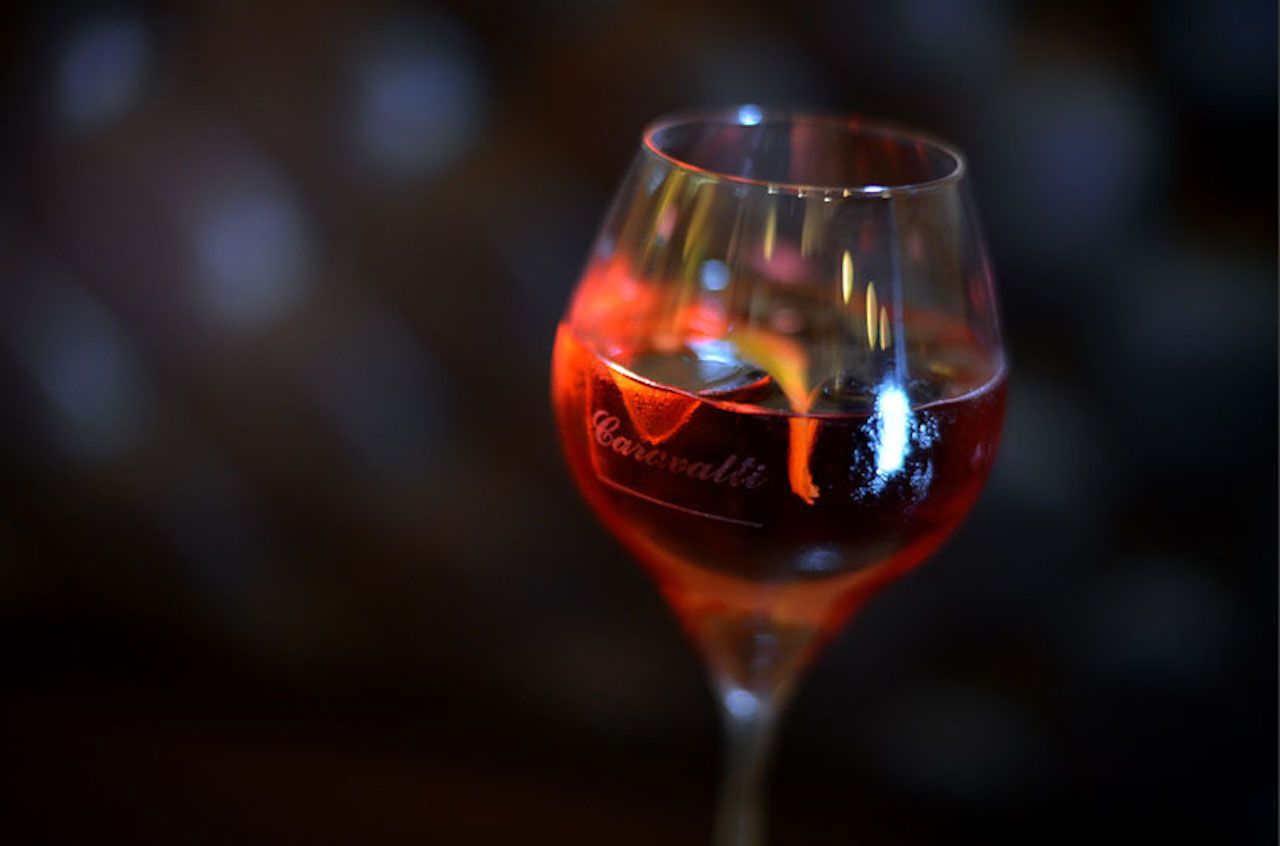 Mantova’s aperitivo, in contrast, is all about sophistication. Piazza Erbe is theatrical, a place to see people and be seen. Historic Bar Caravatti, located under the porticos of this square, performs the social ritual of aperitivo admirably. From the shaded chairs and tables, you can look out onto the sunlit square while you drink its signature Aperitivo Caravatti. It is made from infusing wine with various herbs and spices, including gentian and hibiscus. It is a rather exclusive aperitivo to be enjoyed in an exclusive location.

Produced by the Carpano company in Turin, the Punt e Mes is a dark brown vermouth made with a bitter called quina. The name translates as “a point and a half” and refers to the fact that the drink contains one point of sweetness and half a point of bitterness. It was supposedly created in 1870 in the Carpano wine shop in Turin, by a stockbroker who, thinking about the increase in share prices that day of one and a half points, asked for his usual Carpano vermouth with an added half a measure of the bitter quina. It immediately became popular as an aperitivo drink and was reportedly the favorite drink of Giovanni Agnelli, founder of FIAT. It is now sold in bottles and is usually drunk straight (and very cold) or on the rocks, as well as in cocktails such as a Punt e Mes Negroni or Americano.

Food + DrinkCicchetti Are Venice’s Answer To Tapas. Here’s Where To Try Them.
Tagged
Spirits + Cocktails Italy
What did you think of this story?
Meh
Good
Awesome