Nearly 10,000 feet above sea level, in a trailhead parking lot outside of Breckenridge, Colorado, a group of locals and tourists gathered on a recent Saturday morning — many donning work gloves and carrying large plastic bags. Those who weren’t visitors or among Breckenridge’s 5,000 residents hailed from the surrounding Summit County, one of the country’s most popular ski destinations. All were there for the same reason: To keep Breckenridge sustainable.

Specifically, the men and women from teen years to retirement age planned to clean up the B&B trailhead, a popular hiking and mountain biking trail in the area. The work day was one of many scheduled over the course of the summer, where locals and visitors can work together to maintain and develop local trail systems. The effort is part of a broader plan to encourage sustainable travel in Breckenridge.

Most travelers certainly don’t plan to wield a shovel or drive a trail dozer while on vacation. But for those who do want to give back, a local government-run group called Friends of Breckenridge Trails is offering a chance to learn what goes into keeping these trails, which draw hikers and mountain bikers from around the world, usable.

“The Friends of Breckenridge Trails program offers a variety of projects throughout the summer,” said Tony Overlook, the Breckenridge Open Space and Trails supervisor, to Matador via email. “Some of these projects are more family focused and friendly, such as planting tree seedlings or weed removal. New trail construction is the most strenuous activity, but we do try to find the right tasks according to the person’s ability and skill level.”

This program is only a part of the sustainability initiatives that the Town of Breckenridge has enacted to reduce its environmental impact and keep this place, which sees some three million annual visitors, in pristine shape for future generations. What’s most exciting is that visitors are encouraged to participate. 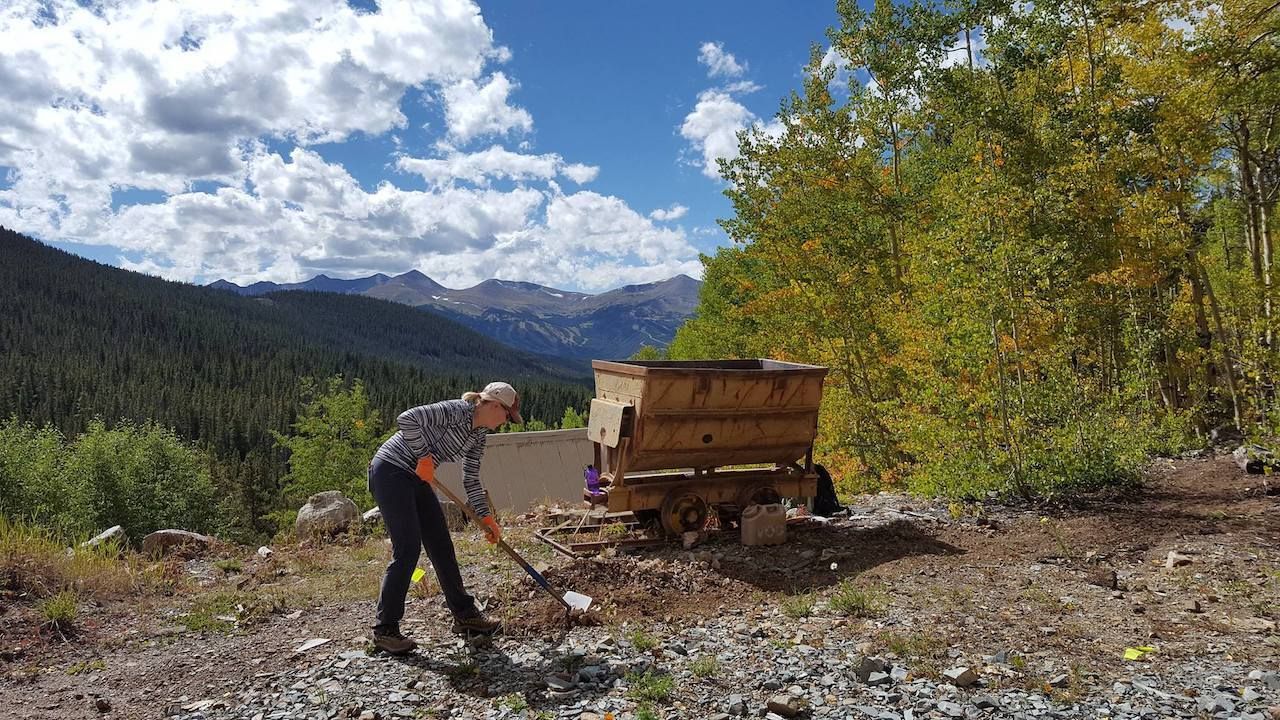 Sustainable travel in Breckenridge has been the town’s goal since 2011, when a series of studies and public input resulted in the Sustainable Breck plan. The plan developed by the Town of Breckenridge encompasses transportation, local businesses, and public spaces including trails and parks, with the goal of reducing both emissions and the impact on the environment. Visitors are among the most common users of Breckenridge trail systems, frequenting popular hiking trails like the Burro Trail and Sawmill Trail and the biking routes on the east end of town through Carter Park.

Friends of Breckenridge Trails was part of that effort, and each year it schedules a series of volunteer work days throughout the summer for families and recreators of all stripes to put a bit of sweat labor into local trail systems. Tasks include thinning forest overgrowth and general trail construction and maintenance. In 2021, these work days generally start at 9:00 AM and end by 2:00 PM.

Signing up to volunteer for a full day, or even just an hour or two, ensures a hands-on way to learn about outdoor recreation, meet other visitors and locals with similar hobbies, and give back to the community you visit. Upcoming work days include maintenance on the Barney Ford Trail and the season wrap-up on September 12 on the Little Corporal mountain bike trail, with other events scheduled in-between.

“We also understand that families are busy and may not be able to stay an entire work day,” Overlook said. “Even if a family can only build with us for a couple of hours, we consider it better than not participating at all.” Visit the Friends of Breckenridge Trails’ event page to learn more about how to help the group maintain area trails or to sign up for an upcoming working day. 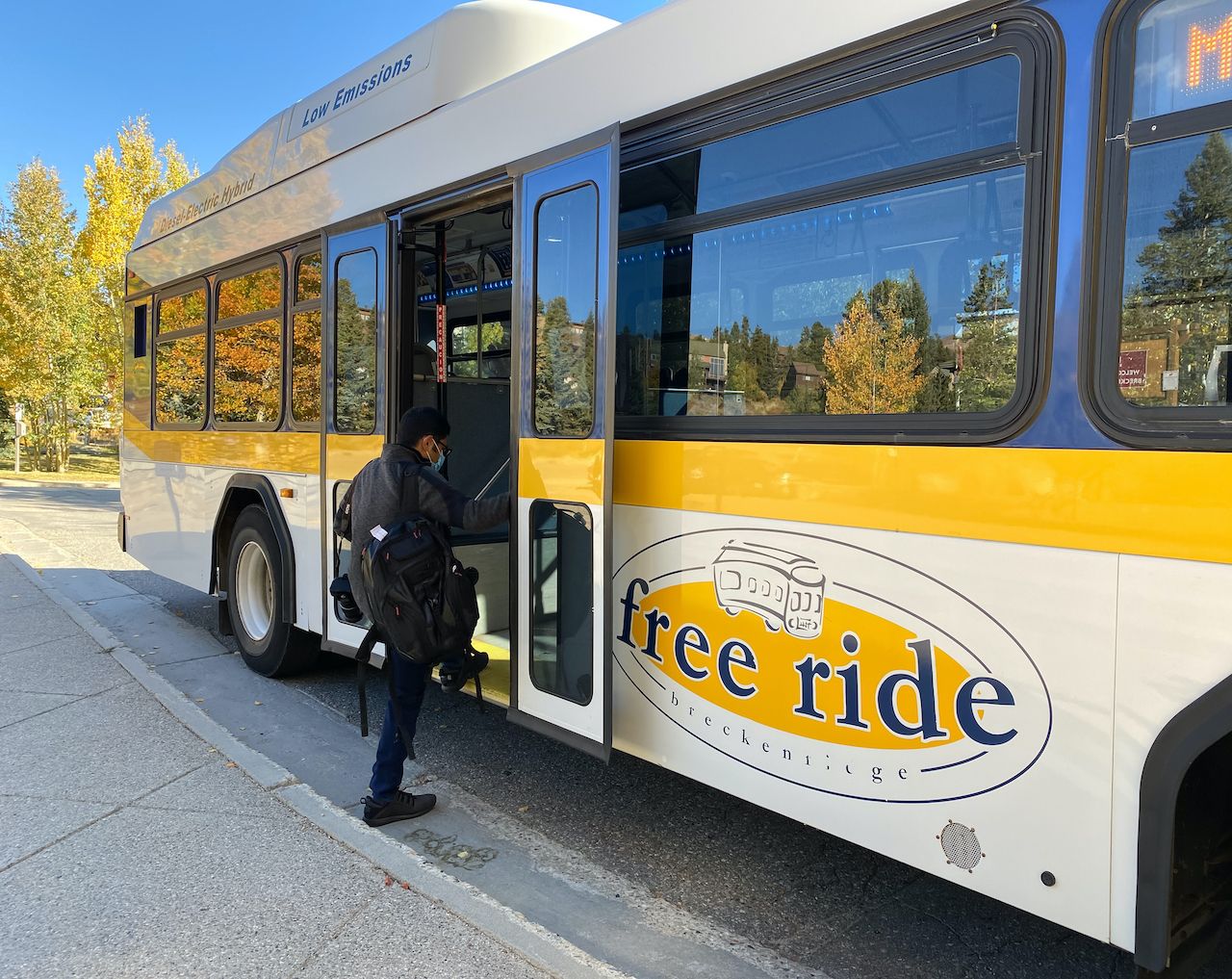 Beyond keeping its trails in good shape and protecting the land that surrounds them, Breckenridge is working to minimize its environmental impact in other ways. The launch of the Sustainable Breck program in 2011 made Breckenridge a pioneer in sustainable high-mountain tourism. Born out of a series of studies conducted by the town beginning in 2008, Sustainable Breck is a branch of the town government focused on addressing environmental issues including power, waste, and transportation, and developing annual action plans to minimize the impact of each. Vail Resorts, which operates Breckenridge ski resort, has committed to being 93 percent renewable-powered by 2023 and has already reached a 50 percent waste diversion goal.

In 2019, Breckenridge released an updated Destination Management Plan that included a Responsible Tourism Initiative called “B Like Breckenridge.” Calls to action include messages so common in outdoor-centric towns that they are nearly boilerplate, such as Leave No Trace and “stick to the trail” when recreating outdoors. But it also prompts locals and visitors to go deeper by leaving their car parked in favor of two free public transit lines traversing the town or even pedaling one’s way down Main Street (the town has plenty of bike parking). Businesses are prodded to follow water conservation and waste mitigation guidelines. Locals and tourists alike are tasked with treating each other, along with the common areas and public lands they share, with respect.

Indeed, minimizing environmental impact in a place where visitors generally outnumber residents is no easy task. But the group continues to make tangible strides. The town recently installed 22 electric vehicle charging stations in parking lots and at businesses and access points frequented by visitors. Plans for an additional 40 by the fall of 2021 are in the works. As noted above, two free bus lines serve most of central Breckenridge including lodging and dining areas at the base of the ski resort and downtown (check out schedules and plan your routes in advance). Buses in Breckenridge connect to the Summit Stage bus system, which offers free rides across Summit County including to Frisco, Dillon, Silverthorne, Keystone, and Copper Mountain.

The town is phasing out single-use plastic 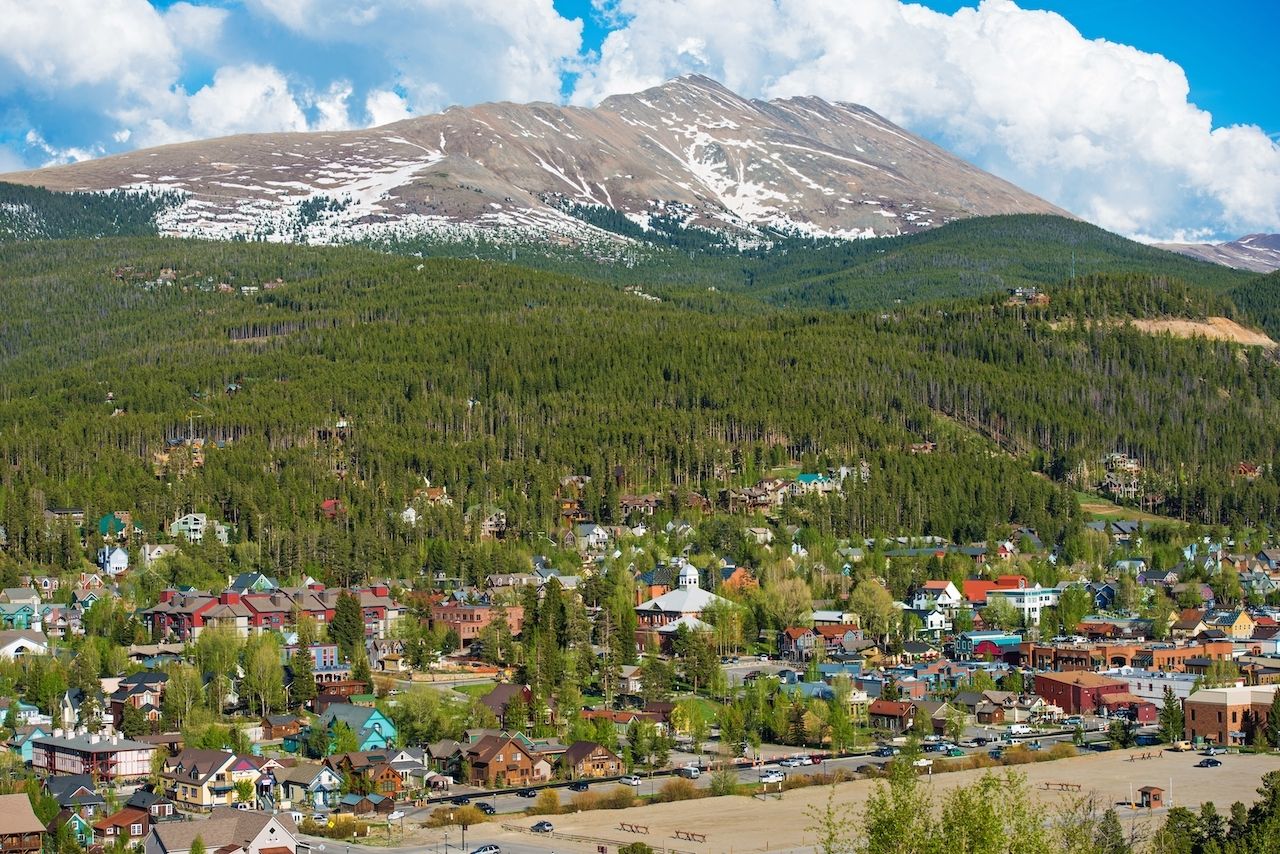 Eight US states have extensive plastic bag bans as of spring 2021. Colorado is not among them, a disappointing fact in a state known for its natural beauty and, increasingly, for progressive politics. The state appears nowhere close to implementing a ban, opting instead to pursue a ten-cent fee for plastic and paper bags beginning in 2023. This leaves jurisdictions within Colorado to go their own route to eliminate plastic waste. Breckenridge first put a disposable bag ordinance in place in 2013 that minimized use in some situations and put a fee on their use in others, and will implement a full ban on all single-use plastic bags beginning September 1, 2021. Also from that date, paper bags must contain at least 40 percent recycled material and will incur a 10-cent fee.

“Breckenridge guests can expect the phasing out of plastic to further the Town’s sustainability goals related to waste reduction,” Dineen said. “Breckenridge seeks to mitigate the negative impacts of single-use plastics on public welfare and the environment and to help drive recycling markets in recoverable materials.”

Some local businesses are ahead of the game, including the innovative lodging and outdoor recreation-based social club, Gravity Haus, which opened in late 2019 and has been plastic-free since its inception. Nonprofit group High Country Conservation Center is working with other lodging partners in the area to implement Earth-friendly cleaning products, energy-efficient lighting, and waste management plans, according to GoBreck.com, and leading an initiative to help local residents and businesses install rooftop solar panels. The town partnered with Pivot Energy in 2020 in an effort to run all municipal buildings on renewable energy by 2025. For the entire town, the long-term goal for residents, businesses, and sustainable travel in Breckenridge is to reduce emissions by 50 percent by 2030.

“Preserving the character of our town and the nature that surrounds us has always been at the heart of the Breckenridge community,” Dineen said. “To a large part, our collective desire to protect this special ecosystem is what draws people here in the first place — both to live, and to visit.”

How you can travel green in Breckenridge 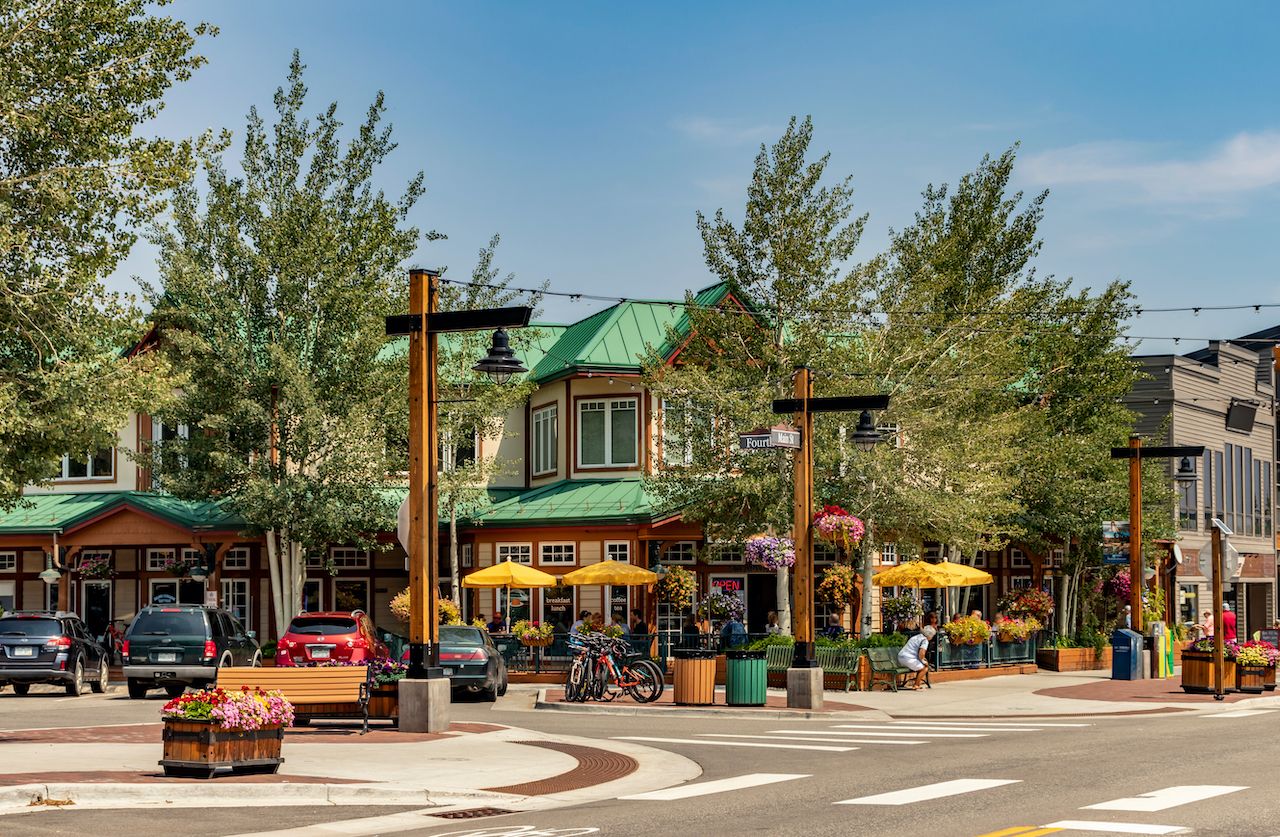 To keep your car, and its emissions, at bay, bring a bicycle and a good pair of hiking boots. You can also stop by Carver’s Ski and Bike for bike rentals, as well as tune-ups and gear. Another non-car option is to take the Summit Stage and the local bus. Consider taking the Bustang from Denver or western Colorado rather than driving to Summit County altogether.

Bring portable water, coffee, and food containers in order to avoid single-use items. And support lodging, dining, and other small businesses that emphasize sustainability efforts. That’s easy to do, since GoBreck.com maintains a current list of environmental practices in the area.

SustainabilityAspen Snowmass Raises the Bar on Ski Resort Sustainability. Who Will Follow?
Tagged
Sustainability Volunteer Colorado, United States
What did you think of this story?
Meh
Good
Awesome