Texas just likes to do things its own way. Dress shoes with a tuxedo? No sir, we prefer cowboy boots. Measuring distances in miles? When you have a state this big, distance is measured in hours. Coke or Pepsi? How ‘bout Dr. Pepper. But we’ll still call it a coke.

But perhaps nothing signifies the individuality of Texas better than the world of barbecue. In other parts of the country barbecue means pork and sauces, but in Texas it’s all about the beef. And they like it that way.

“We’re the beef state,” says Texas Monthly barbecue editor Daniel Vaughn. “A lot of other styles look down on Texas because we put beef in a smoker instead of pork, but the cut that’s come to define Texas barbecue is the brisket.”

He’s not lying: While the individual styles vary from region to region, brisket is the one constant. But how did it come to signify Texas barbecue? And how did some of the other Texas barbecue staples like Czech sausage and slices of white bread also become synonymous with the Lone Star State?

Brisket started as a money maker for meat markets 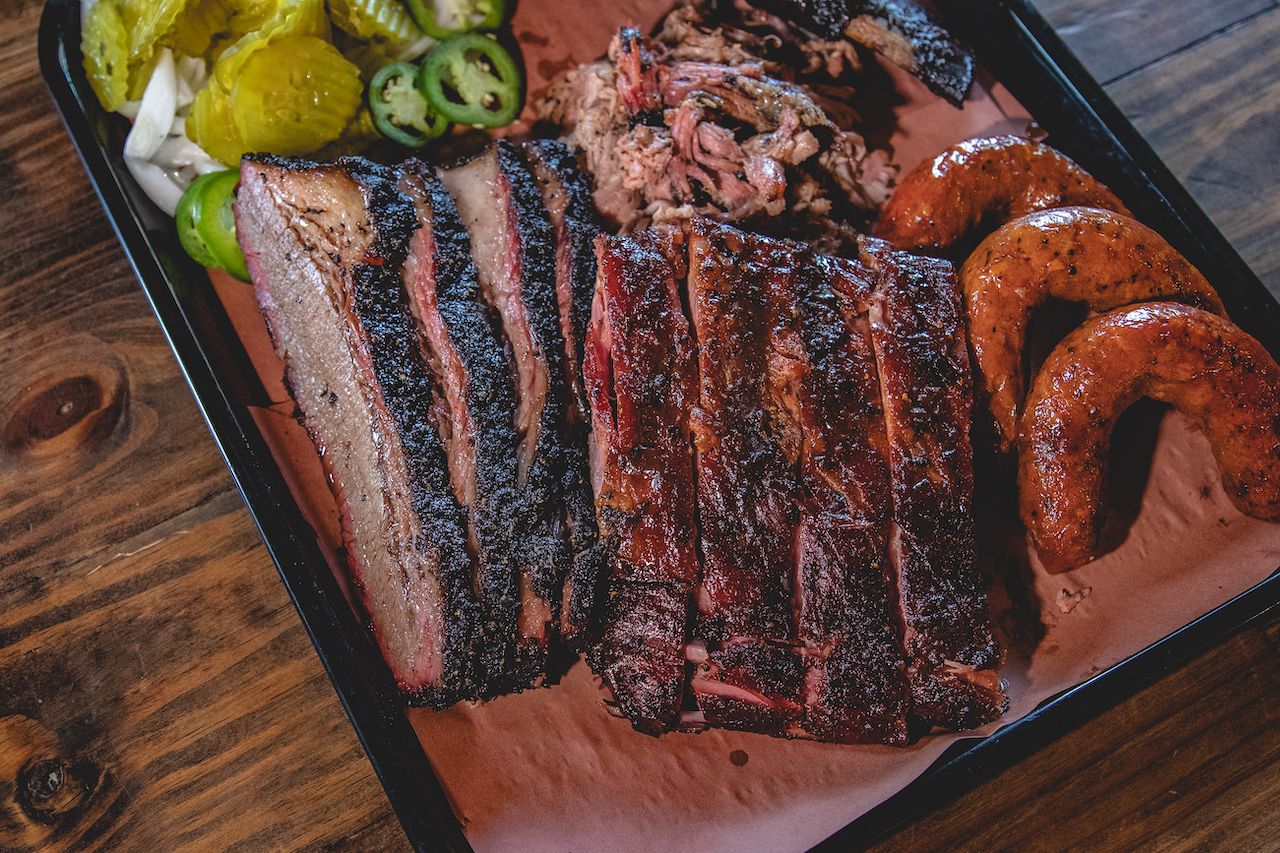 Because Texas is America’s leader in beef production, it only stands to reason that beef would be the centerpiece of its barbecue. Brisket in particular became popular not for its robust size or fatty juiciness, but rather out of commercial necessity.

Commercial barbecue in the US — the kind you go out and buy instead of cook in your backyard for friends — first started at small stands around the early 1900s in places like Kansas City, Georgia, and the Carolinas. Barbecue in Texas was mostly found in the state’s copious meat markets. And in the 1890s, before the availability of mass refrigeration, the butchers in those meat markets needed something to do when meats were no longer at their peak.

“Because of that culture, it was about what meats were left over in the case, beyond their prime,” Vaughn says. “Those were the ones that went into the smoker and became barbecue.”

Butchers wanted to use as much of the leftover meat as possible, so the most-commonly used cut of brisket became the packer cut, which has very little done to it other than removing the bones. The cut gave butchers the most meat to sell.

“It’s got a generous fat cap, so you really end up with two muscles, the flat and the pointe,” says Vaughn. “The lean end is the flat and the fattier end is the point. While a lot of different barbecues will have different ways of trimming that fat cap, briskets on smokers throughout Texas will look the same: It’s gonna be white on top instead of red, still completely covered in fat.”

Big beef lends itself to offset smoking, and no sauce 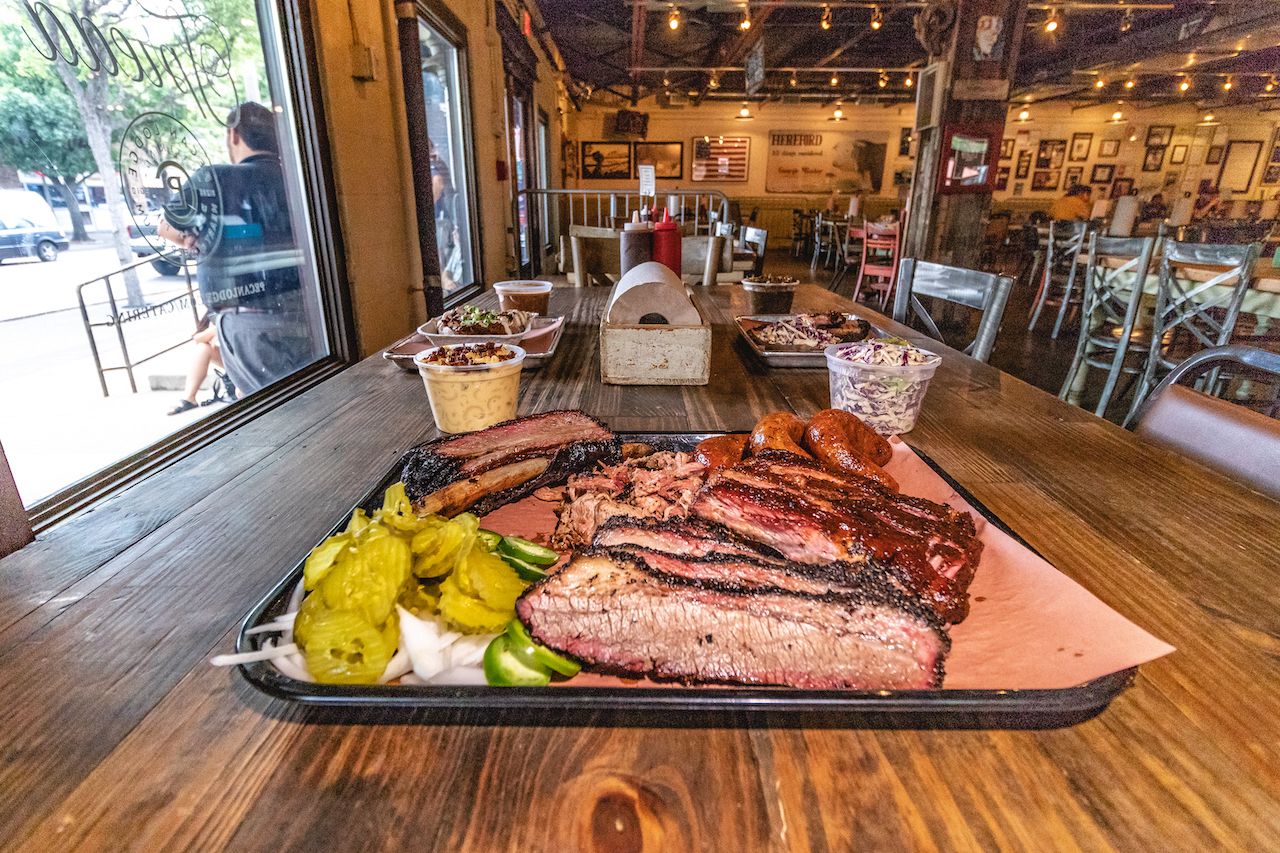 Cholesterol aside, that thick, slow-smoked brisket also lent itself to Texas’ signature style of smoking meats: the offset smoker. This is a smoker where the fire box sits off to the side of the smoker, with no actual flame under the meat. This allows the smoke to slowly envelop the meat, cooking for eight or more hours at temperatures of around 225 degrees and saturating the beef with the flavor of the wood.

“With a fire off to the side and exhaust on the opposite side, it’s bathing the meat in that smoky air,” Vaughn says. “That’s certainly going to be a better cooking method for brisket, that needs a long, slow cooking time in order to tenderize it.”

The type of wood smokers used varies by region, based mostly on the trees native to the area. Central Texas uses oak, San Antonio and all points south and west use mesquite, and pecan and hickory are most popular in north and northeast Texas. Although, interestingly, Dallas’ famous Pecan Lodge doesn’t actually use pecan.

Because the cooking process puts so much flavor into the meat, Texas has traditionally given a hard pass to rubs and sauces, preferring to let the brisket speak for itself.

“We’re really known for salt and pepper,” says Vaughn, which is kind of like a restaurant saying it’s known for its tap water. 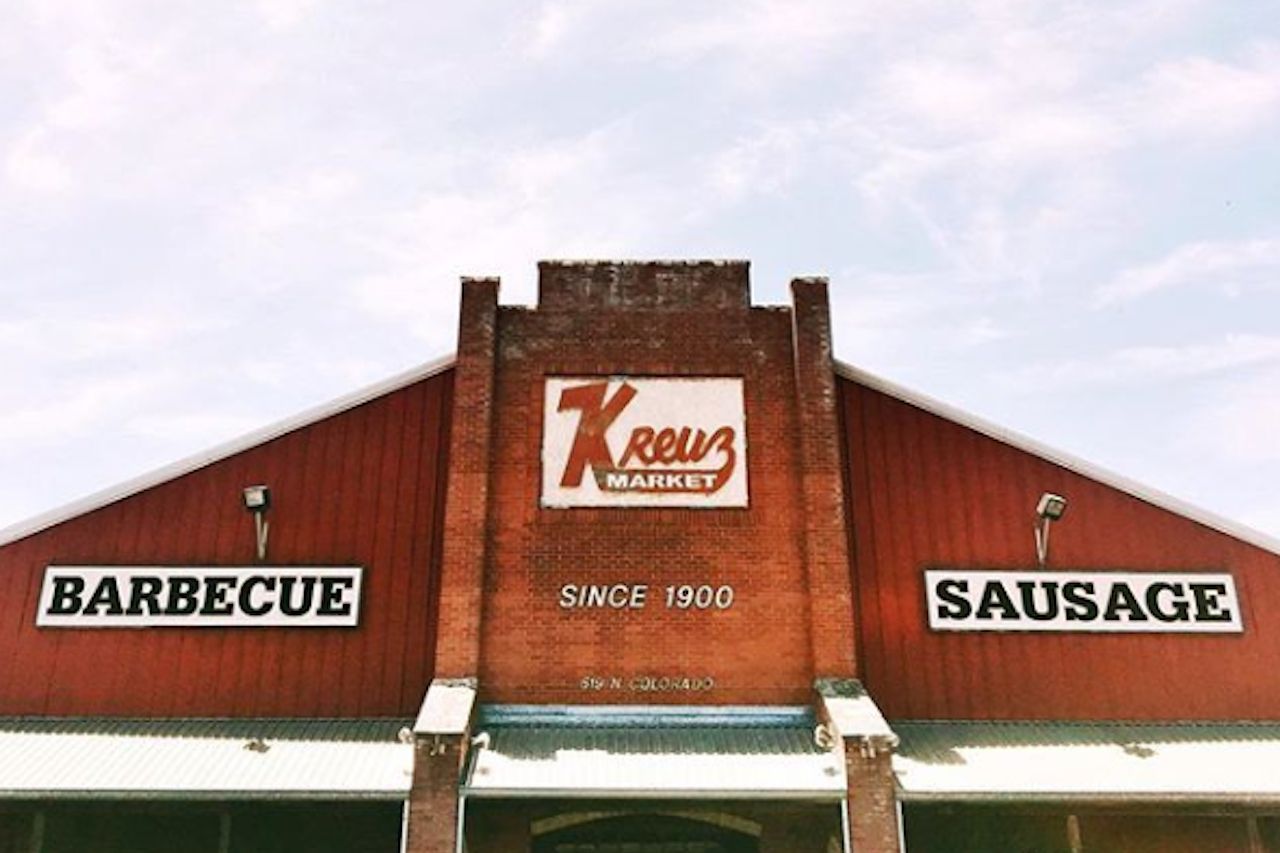 Sauces were never big in Texas, and urban legend says real Texas barbecue joints don’t offer it at all. That wasn’t the full truth, but there were plenty of no-sauce spots. The last holdout was Kreuz Market in Lockhart, which for years smoked under an iconic sign that read, “No sauce, no forks!” Kreuz, along with nearly every other barbecue joint in the state, now happily serves sauce. But in true Texas fashion it is always an individual choice.

“We like sauce just fine,” Vaughn says. “But we like it on the side. We like to control how much sauce we put on or none at all.”

Because nobody’s telling a Texan how much of anything they can or can’t have. Especially when it comes to barbecue.

Sausage and sides also stem from the meat markets 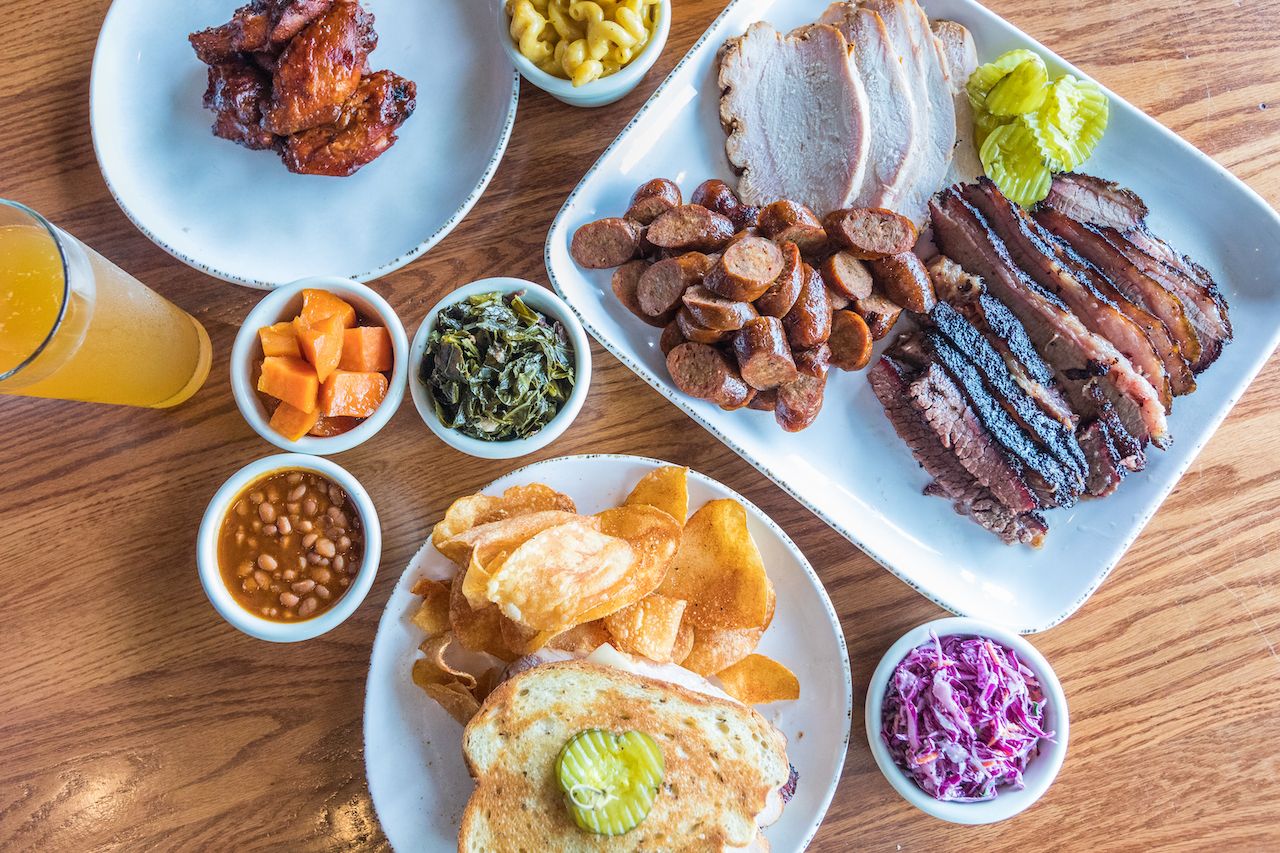 Though it stands a distant second to brisket on the list of iconic Texas barbecue dishes, sausage — especially beef sausage — is also a staple of the style. Like most sausage making, this stems mostly from butchers’ need to monetize scrap meat left over once larger cuts had been made.

“The German meat markets in Lockhart, those (sausages) were primarily beef, using trimmings off the brisket that are considerably bigger than trimmings off the pork rib,” Vaughn says. “So they end up being about 85 percent beef.”

Czech meat markets, however, would often fill sausages with more pork, sometimes up to 50 percent. Czech sausages also include garlic and herbs, though Vaughn says if you ask what defines a Czech sausage, the most common answer you’ll get is, “A Czech person made it.”

Recently, however, Texas barbecue restaurants have taken sausage and made it the signature, differentiating item on the menu. Where things like brisket and pork ribs can be fairly standard, sausages are where restaurants add their own ingredients to create stuff diners can’t find elsewhere.

“Sausage making in Texas is getting kinda ridiculous, in a good way,” Vaughn says. “A lot of barbecue joints here understand having a unique sausage on the menu is a good way to show off their personality, and set them apart from other barbecue joints.”

Sides in Texas are pretty simple: beans, salad, and slaw. But beans here are savory and meaty, again because Texans like everything with a little bit of beef in it, so you won’t find sweet beans like you might in Memphis or Kansas City.

The other side-dish stalwarts you’ll find statewide are dill pickle chips, raw onion, and white bread. It’s a seemingly random combination of things to throw on a barbecue plate, and while many just chalk it up to tradition this too stems from Texas barbecue’s roots in meat markets.

“These were things you could pick up on a store shelf at the butcher shop,” Vaughn explains. “It’s not that the butcher was gonna be back there slaving over a pot of beans, or slaw or salad. You were much more likely to pick up a raw onion, pickles, hot sauce, and a loaf of bread.”

Texans also expect all those sides for free, as they’ve been free for as long as anyone can remember. But though a la carte white bread has not yet caught on, Texas barbecue still evolves with the times. Vaughn tells of going to venerable Kreuz and seeing a daily special of pork belly burnt ends, which would have been as inconceivable there a century ago as forks. And you’ll find takes on it in restaurants nationwide, though nobody does it quite as well as Texas.

The distinct barbecue style is as much a part of the state as homecoming mums and Texas-shaped everything. And even if you’re not a die-hard beef lover, it’s something you must try when visiting. Texans pride themselves on doing everything just a little bit differently, and you won’t truly have experienced the place until you’ve sat down with a big, heaping plate of brisket.