There’s a lot to keep track of in the British royal family. Within the last few years, they’ve had their fair share of scandals and happy events; there have been several grand weddings, a few new family additions, and some record-breaking — Queen Elizabeth II became the longest reigning monarch in 2015. The royal family is a large one, and its members are all spread out over different royal residences within the UK — many of which can be seen in films and television, like Netflix’s The Crown.

Whether you are obsessed or indifferent about the House of Windsor’s tribulations, the residences are worthy sights in their own right. From the original main residence in London to an official one up in Scotland, here are some royal residences worth tacking onto your British itinerary. 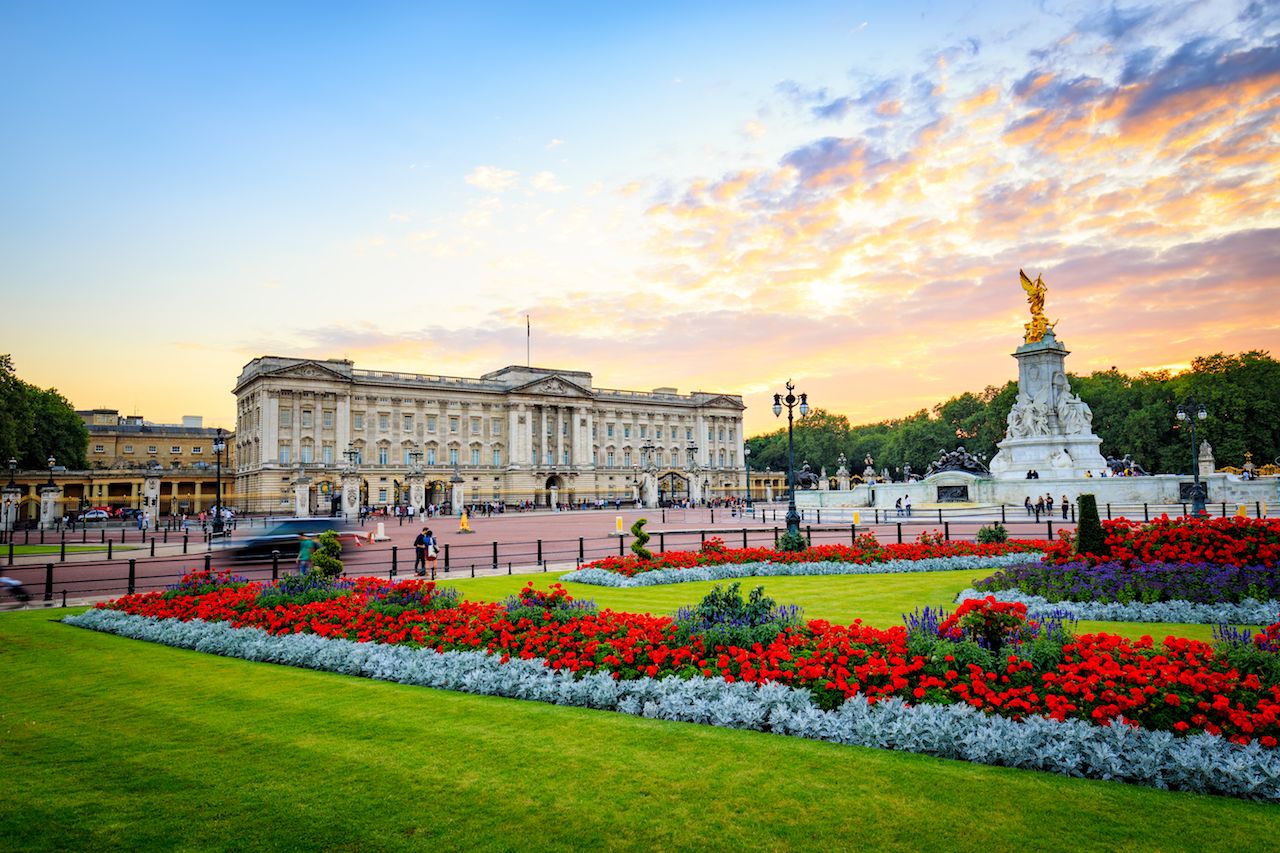 Built in the early 1700s, Buckingham Palace didn’t become the official residence of the British monarchy in London until 1837. While its primary function is as the main location for administrative duties, such as official events and meetings, it’s also where Queen Elizabeth II calls home and spends the majority of her time (when she’s in, the Royal Standard — not the Union Jack — flies above the palace). Of the 775 total rooms — which include 19 state rooms, 52 royal and guest bedrooms, 188 staff bedrooms, 92 offices, and 78 bathrooms — there are only three areas that visitors can access — and only during specific times. Inside the palace itself, visitors can only tour the state rooms during 10 weeks in the summer and a few selected dates in winter and spring.

On the grounds of the palace is the Royal Mews. When Buckingham Palace was made to be the main royal residence, all of the stables at the King’s Mews (present-day Trafalgar Square) were moved over to the Royal Mews’ current location, and the old space was demolished. In addition to actual horses, gorgeous carriages and coaches are on display — some of which, like the Gold State Coach, are still used to this day. It’s open from November to February each year.

The third location, also on the grounds, open to visitors is the Queen’s Gallery. A public art gallery opened in 1962, it displays different works from the Royal Collection on a rotating basis. The Queen’s gallery is open year-round. 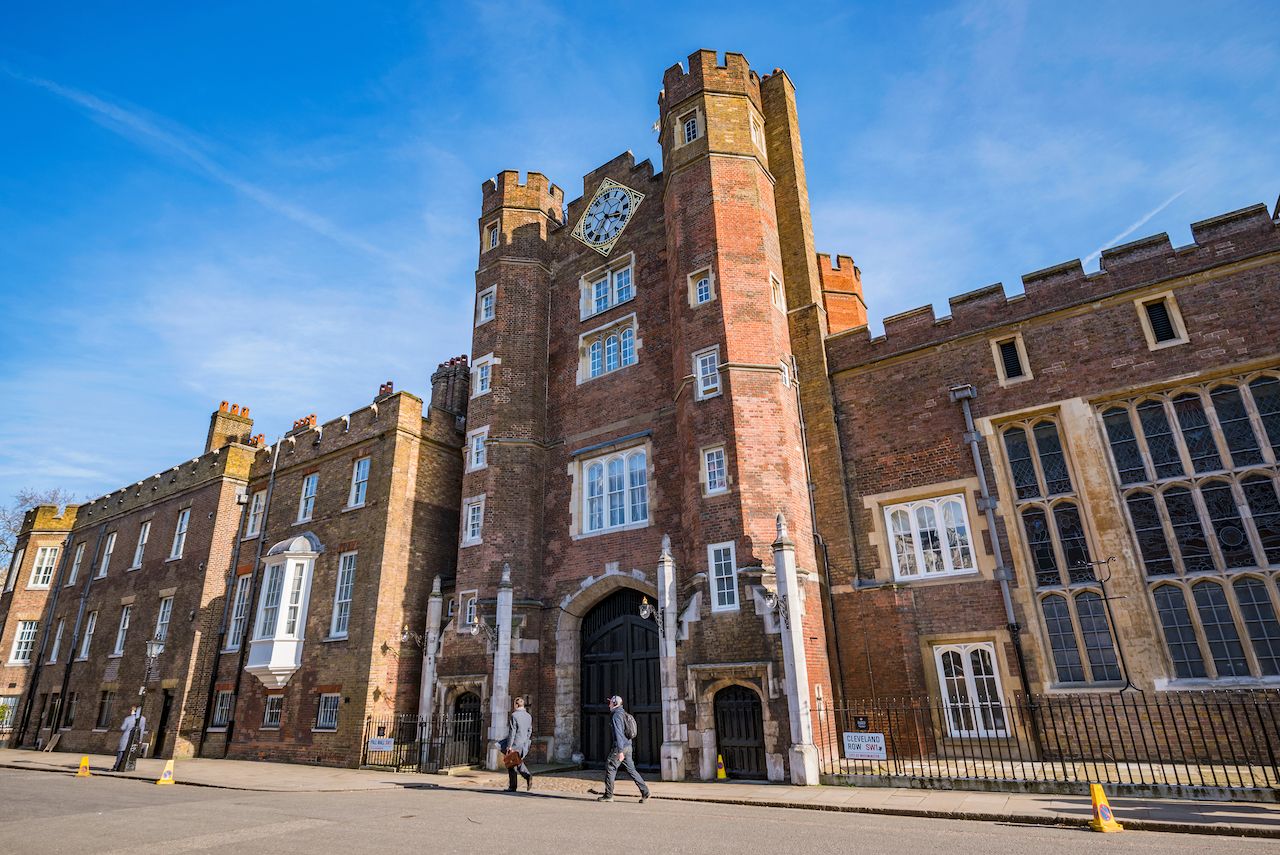 Before there was Buckingham Palace, there was St. James’s Palace. It’s the oldest royal residence in the entire United Kingdom, with most of its construction taking place in the 1530s under Henry VIII. When the Palace of Whitehall was destroyed in a fire, the royal family moved its main residence to St. James’s. When Buckingham Palace was built, the older palace began being used less and less, mostly for formal occasions. William IV, the king before Queen Victoria, was the last monarch to use St. James’s, and it was Victoria who made the move to Buckingham as the main residence official.

Today, St. James’s Palace is still in use as the London residence for some members of the royal family like Princesses Beatrice and Eugenie, as well as the meeting place for the Accession Council. Several offices, such as that of the Royal Collection Trust and officials within the royal household, are there as well. Unfortunately, it’s not open to the public — but because it’s in London, stopping by to take a quick look and photo of the front and surrounding area is easily done.

Right next to St. James’s Palace is Clarence House, built in the late 1820s. Its walls have seen several generations of the royal family take up residence there, including the Queen Mother Elizabeth, as well as Queen Elizabeth II and Prince Philip, and the interior design is frequently remodeled to the tastes of its current occupants of the time. Currently, it’s the official London residence of Prince Charles and Camilla. It’s only open during the month of August each year, and visitors can go on a guided tour of five rooms and adjoining spaces on the ground floor. 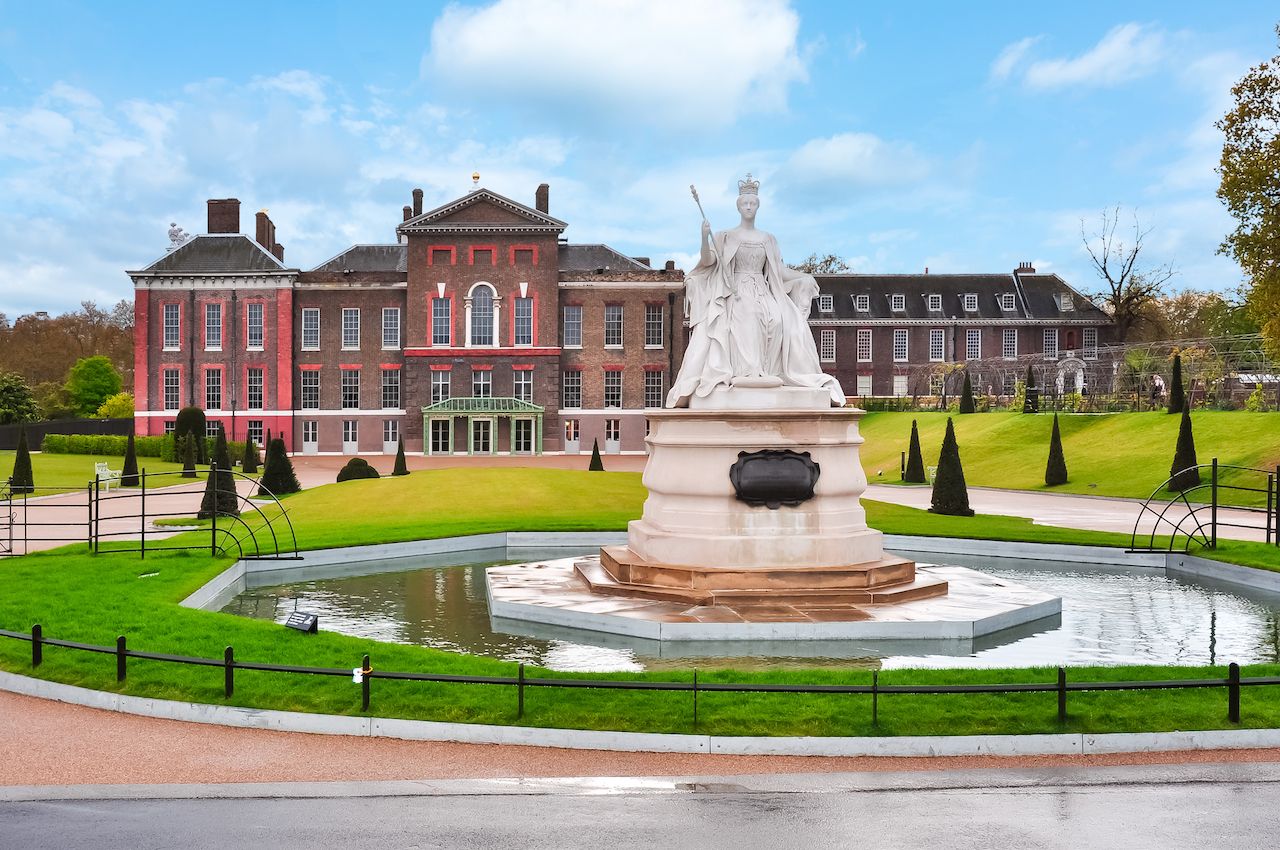 Though it was built in the early 15th century, Kensington Palace didn’t pass into the hands of the royal family until 1689. It was the birthplace and childhood home of Queen Victoria, though she never went back to Kensington after she ascended to the throne and moved the official royal residence to Buckingham Palace. Currently, it’s the London residence of Prince William, Kate, and their children.

Kensington Palace is one of the more accessible palaces, and visitors are allowed to see more there than any other London residence. Open to the public year-round, visitors can take their time walking through the opulent rooms of the king and queen’s state apartments, as well as the lush gardens out back. In addition to touring the palace’s rooms, there are also permanent and rotating exhibits that sometimes display surviving artifacts of past royals, such as the current one on Queen Victoria that examines how she balanced being queen with being a wife and mother, and the one taking a look into Princess Diana’s style. 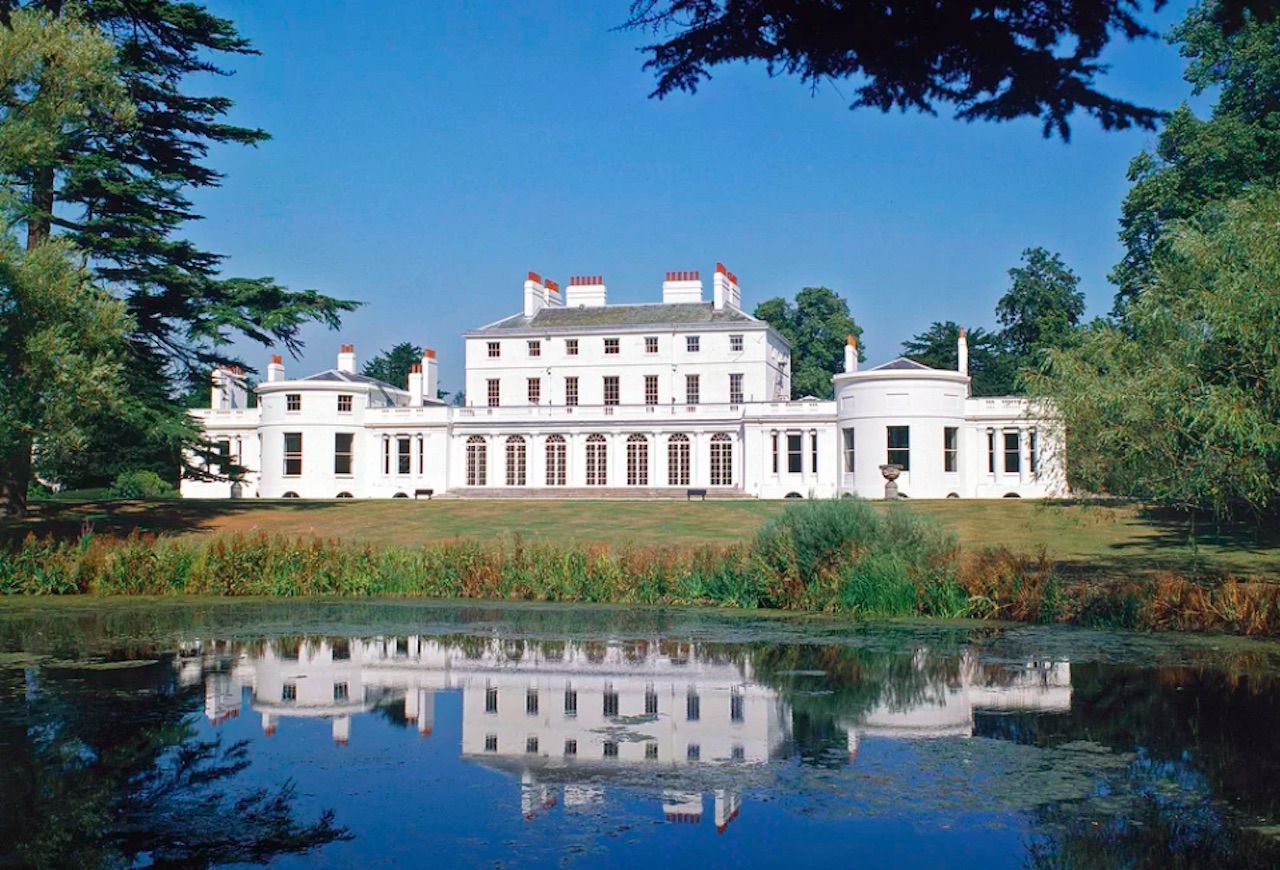 Part of the expansive Frogmore Estate, Frogmore House gets its name from the abundance of frogs living in the area. Construction of the house was completed in 1684 and the estate itself was purchased and leased out by Henry VIII. In 1792, Queen Charlotte, wife of George III, bought the lease because she wanted a country retreat for herself and her family. In 2018, Prince Harry and Meghan held their wedding reception at Frogmore House.

Frogmore House is only open on three days annually, so visiting this one will take some careful planning. The three days are designated as charity open days, when all proceeds are donated to specific charities. Tickets can be purchased on the charities’ websites. Dates are typically released in April, with the event taking place in either May or June. If you’ve got a group of 15 people or more, however, you’re able to pre-book a visit to Frogmore House for August.

Scoring a ticket means you’ll be able to tour the inside of the house, where you’ll see how Queen Charlotte incorporated her love of botany into its interior design, pass through important rooms, and take a look at original paintings her family created — one of the many interests they pursued as part of their refuge from court. Also included is a visit to the gardens, with lakes, bridges, and tons of greenery. 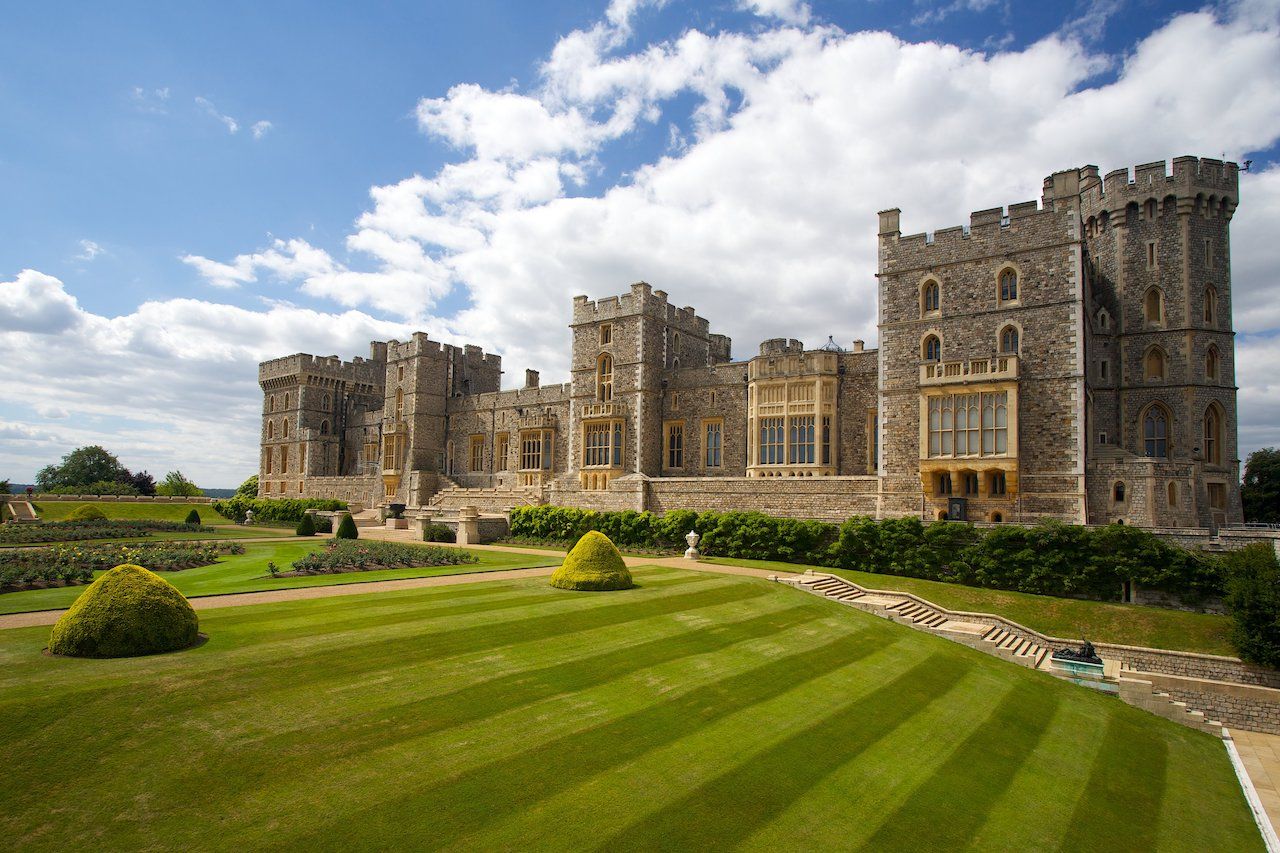 The largest occupied castle in the world, Windsor Castle is one of the more important royal residences in the UK. The original castle was built in the 11th century and founded by William the Conqueror as a way to solidify Norman power after their invasion. Several monarchs throughout the following years rebuilt, remodeled, and renovated the main palace and other buildings within the walls. Windsor Castle is still very much in use today, both by royals and the public. Queen Elizabeth herself uses the castle frequently, spending most of her private time on weekends there. Between March and April, the queen sets up official residence at Windsor, known as Easter Court, when she hosts events, holds meetings, and presides over ceremonies; during June, the Queen is there for a week to attend the Order of the Garter and Royal Ascot race meeting.

Visitors can easily spend a few hours wandering the entirety of Windsor Castle. Within the castle itself, they’ll be able to walk through the state apartments, semi-state rooms, and the moat room. While it’s currently closed for redevelopment (but will reopen in the future), there’s also a room that has Queen Mary’s dollhouse on display. At three feet tall, the intricately designed dollhouse will put all others to shame.

Also on its grounds is St. George’s Chapel, which has been used for several different services, ranging from weddings to funerals. In May 2018, Prince Harry and Meghan had their wedding there. The Gothic architecture and decor (think stained-glass windows) come together to form what’s one of the most beautiful chapels to date. Buried within the church are a number of well-known royals, such as Henry VIII and George VI.

Windsor Castle is one of the more popular places among tourists, so booking tickets online in advance is highly recommended. Its popularity coupled with the fact that it’s open all year means it’s going to be busy no matter what, though the official website recommends visiting midday as morning is the busiest time of day. 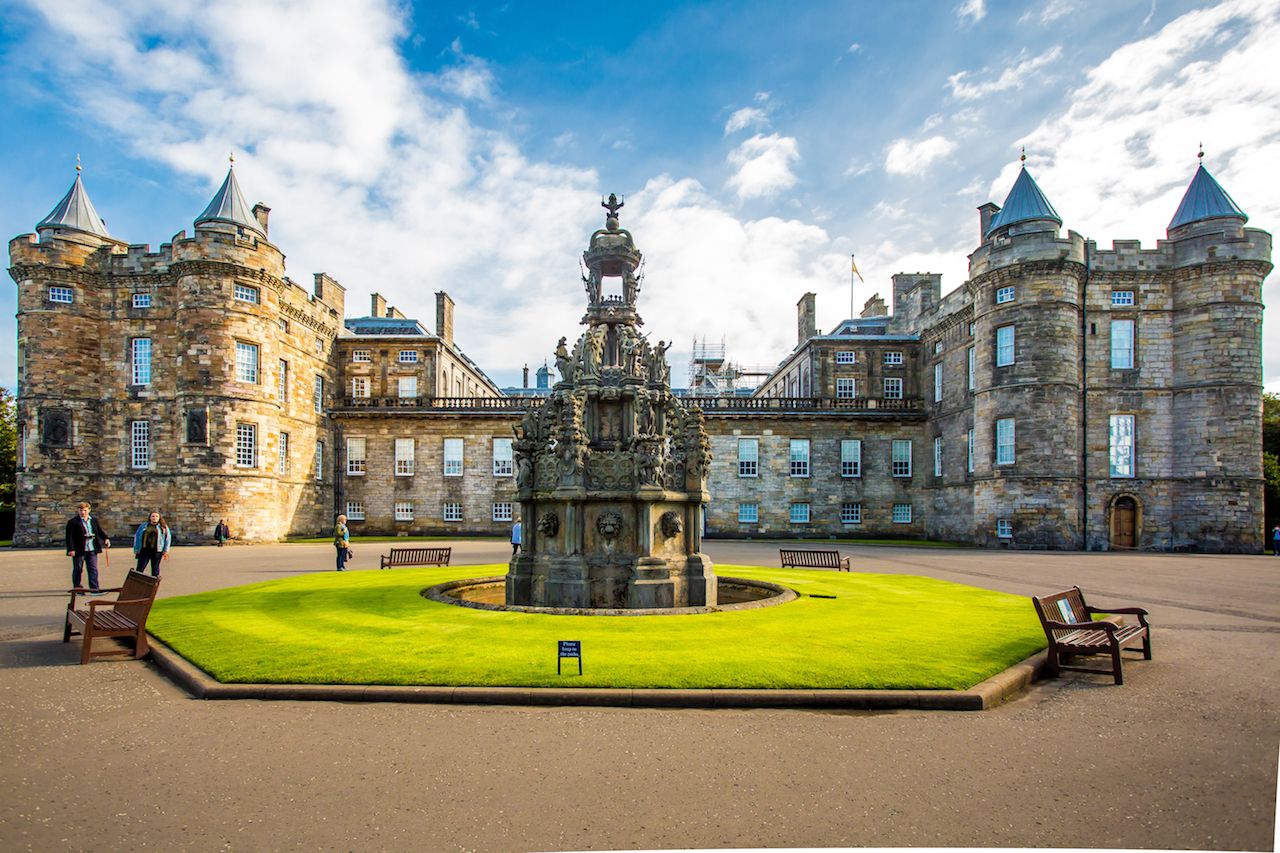 Whenever Queen Elizabeth II heads up north, she stays at her official residence in Edinburgh — she does visit the Scottish capital every year around the end of June to early July. Nicknamed Holyrood Palace, the palace was originally built to be a monastery in 1128. Instead of taking up residence at the solemn Edinburgh Castle, monarchs preferred Holyroodhouse for its green space. One of the more notable residents is Mary, Queen of Scots, and visitors will be able to walk through the rooms where she spent most of her life, as well as some of her personal effects.

A tour will provide a look at the state apartments, including the throne room and privy chamber where Queen Elizabeth II hosts meetings during Holyrood Week; Mary, Queen of Scots’ chambers, such as her bedchamber, outer chamber, and supper room, where she saw her private secretary murdered; the Great Gallery, used as an audience chamber and space for extravagant parties; the ruins of Holyrood Abbey; and the gardens.

In addition, there are also rotating exhibits that provide a look into history, both modern and otherwise.