Bukit Bintang means “Star Hill” in Malay. In Malaysia’s capital city, the term is synonymous with lively nightlife, blinding city lights, bustling crowds, and an excellent mix of street food and high-end dining, often right next to each other. The bright lights may be reminiscent of New York’s Times Square, but Bukit Bintang is more upscale and eclectic. Today, this is Kuala Lumpur’s most vibrant and happening neighborhood and an unmissable stop on any trip here. Here’s how to get the most out of Bukit Bintang.

First, understand a bit of the neighborhood’s history. 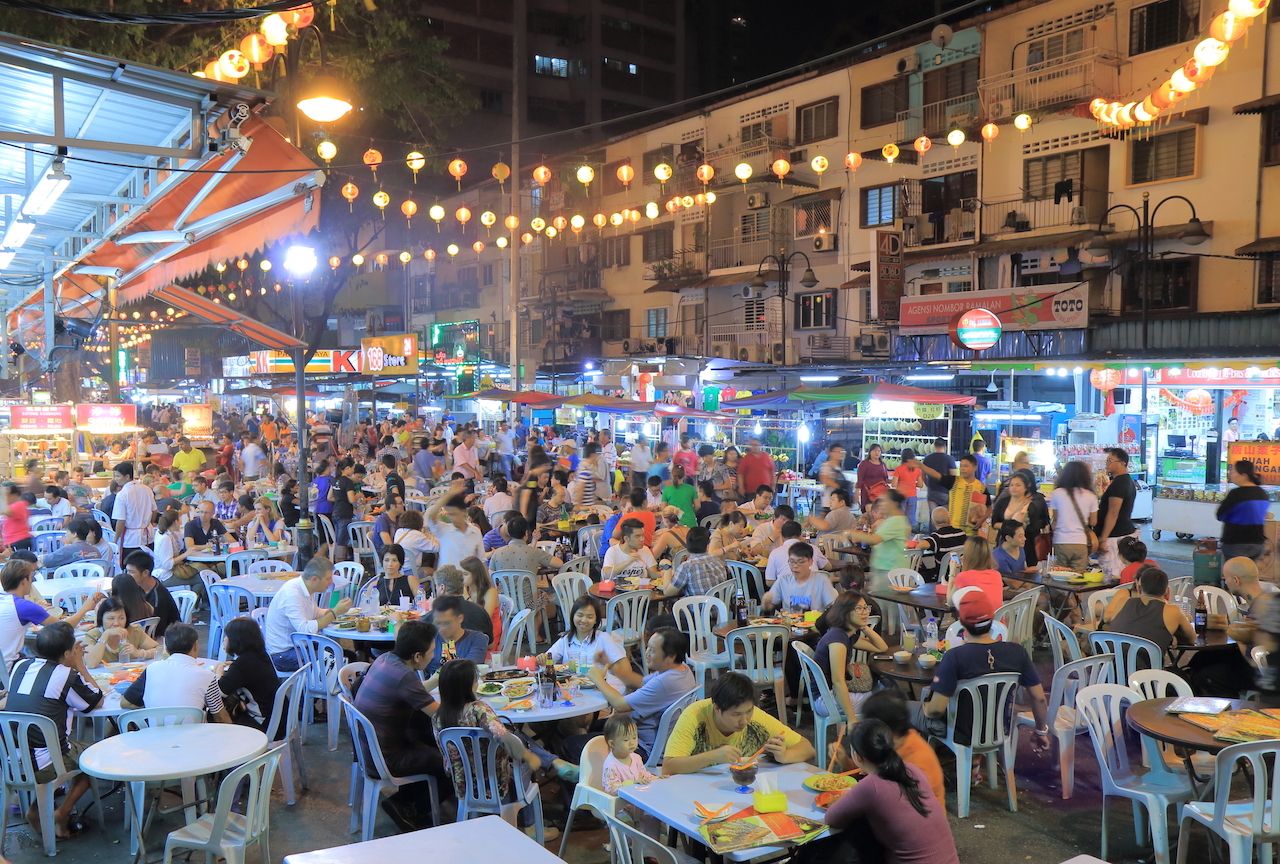 Bukit Bintang was a focal point in the deadly race riots that took place a half-century ago on May 13, 1969. Malaysians clashed heavily, and violently, with Chinese and Indian immigrants following an attempt by the Malay government to create a more diverse, multiracial society. This followed the country’s general election three days prior, in which opposition parties, which were heavily Chinese, performed strongly against the Malaysian incumbent party — leading to a resulting sense of empowerment and resentment by different ethnic groups. Nearly 600 people were killed, according to some estimates, and the country’s first Prime Minister, Tunku Abdul Rahman, was forced to step down.

In the 1980s, an attempt to rejuvenate the area lead to a flurry of retail developments, which have gradually transformed Bukit Bintang into a lively entertainment district and hip food hub. The last 10 years have seen a number of high-end malls and nightlife districts sprouting up, cementing its reputation as a base for the city’s increasing number of international tourists.

Come on an empty stomach. 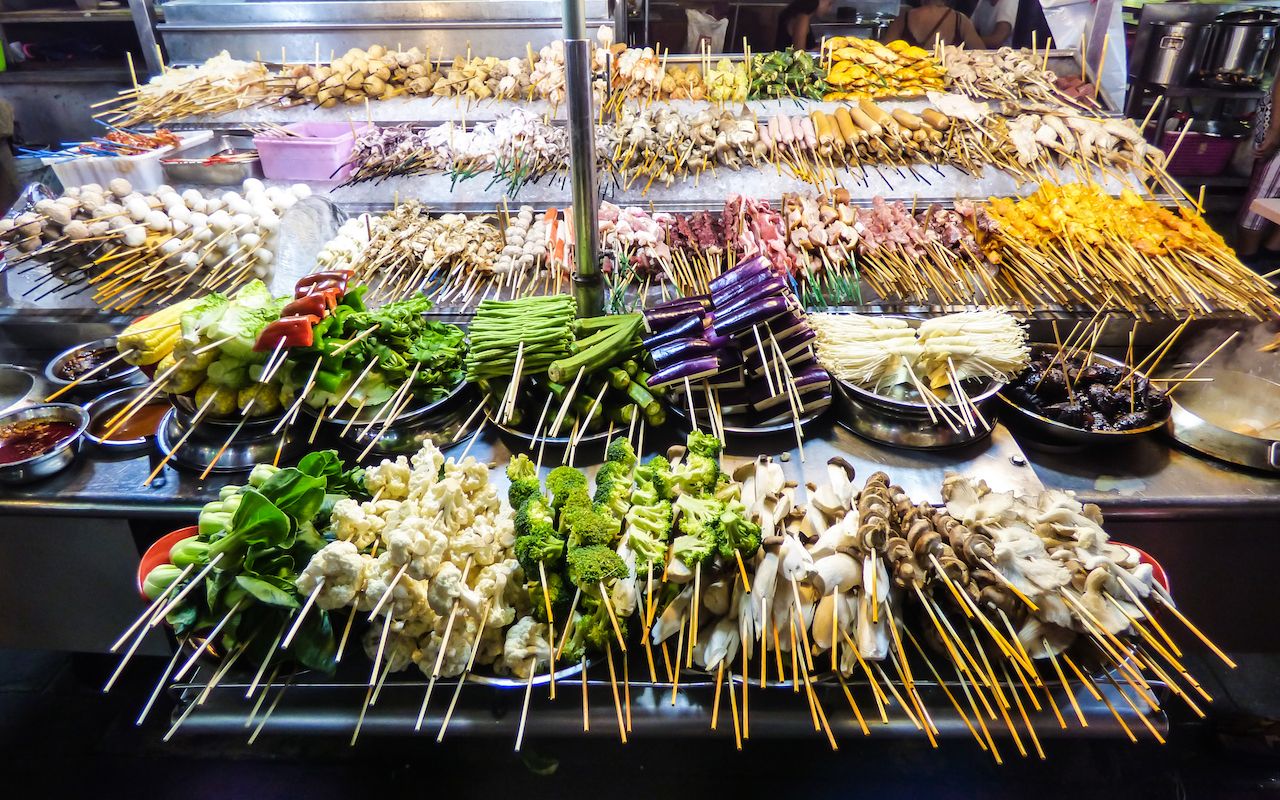 Underneath those bright city lights is enough food to keep even the most diehard foodie busy for months. You can explore Jalan Alor, a street lined with hawker stalls selling an array of local delicacies, until the early hours of the morning. Keep your eyes peeled for the Wong Ah Wah BBQ chicken wing stall. Its juicy chicken wings will leave a sweet-sour, slightly fragrant taste in your mouth. Alternatively, go underground at the LOT 10 Hutong Heritage Food Village, just off the train station and Jalan Sultan Ismail. The entrance is small and, like the space itself, unassuming, but after taking the escalator down, a full-on food court experience opens up. Try hokkien mee, friedkway tiao, wantan mee, soong kee beef noodles, or the aptly named roast duck. For something a bit more upmarket, try the restaurants in Starhill Gallery.

About a half-hour walk from the heart of Bukit Bintang is the Central Market, also known as Pasar Seni. Translating to “Art Market,” it offers an array of traditional handicrafts. If you walk upstairs, there is also a food court filled with delicious local food as well as a famous Peranakan-style restaurant that shouldn’t be missed. Finally, a 22-minute walk will take you to the Pudu Glutton Street night market. You can do exactly what the name says and be a true glutton for the night. Not many tourists know about this, but locals travel far and wide for the crispy fried chicken, delicate steamed pork buns, tender soy noodles, and local desserts at this locally renowned hawker stall alley.

Shop, but beware of counterfeits. 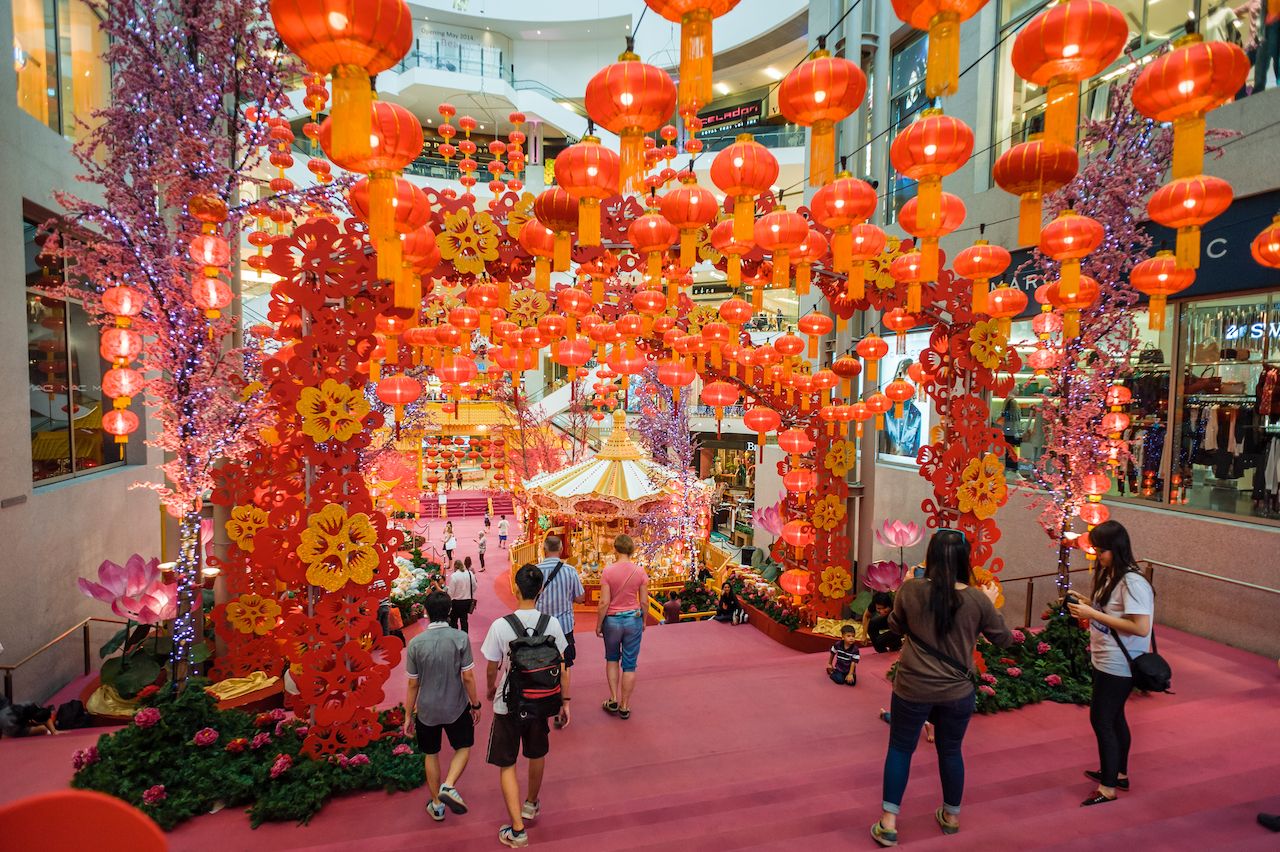 For high-end fashion, the Pavilion KL and Starhill Gallery both have Louis Vuitton, Hermes, and Gucci. Nevertheless, the 12-story Berjaya Times Square and Isetan have mid-range options to suit savvy shoppers. The former also has an indoor theme park with 14 different rides, including a roller coaster. If you are looking for something budget-friendly, opt for Sungei Wang and Lot 10, which has an array of equally fashionable local boutiques. If you want to purchase or fix any electrical devices, visit Low Yat Plaza. Be sure to haggle at all three retail outlets as the initial prices quoted will be marked up, and the vendors will expect you to bargain for a final price. Another thing to bear in mind is that there is a strong chance the electrical products offered will be counterfeit; as such, warranties may not be valid in your respective home countries.

Have a drink at Southeast Asia’s most unique bar. 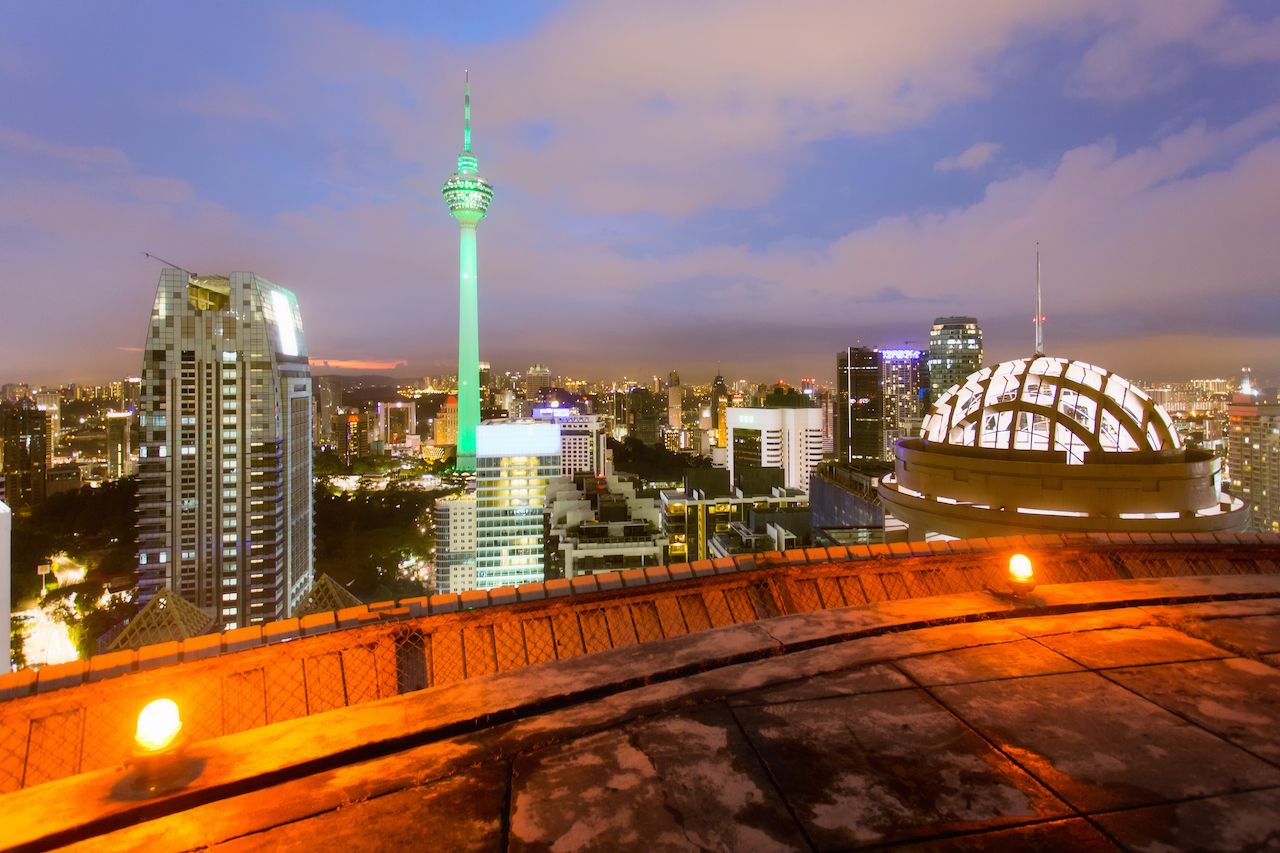 A mere 10-minute walk from Bukit Bintang but still on Jalan Sultan Ismail is a bar with a 360-degree view of the city, the Heli Lounge Bar. During daylight hours, this skyscraper rooftop serves as a functioning helipad. At night, it’s one of the most unique spots to get a drink in all of Southeast Asia. You can catch the sunset on this rooftop bar, jam to the tunes of a DJ, and do your best not to succumb to vertigo — but book in advance as it’s a popular place to take pictures. The drinks are also expensive, so it’s worth ordering one drink to catch the sunset and heading to Changkat to party the night away.

Changkat Bukit Bintang is the city’s hotspot for partying, with KL’s most popular bars and clubs located along the street — perfect for a pub crawl. The Havana Bar & Grill and Pisco combine Latin American themed restaurants with nightclubs. Expect to eat good steak at the former and impressive cocktails at the latter. Beyond those two, head to these spots for late-night drinks and dancing:

Be a tourist and take in some sights. 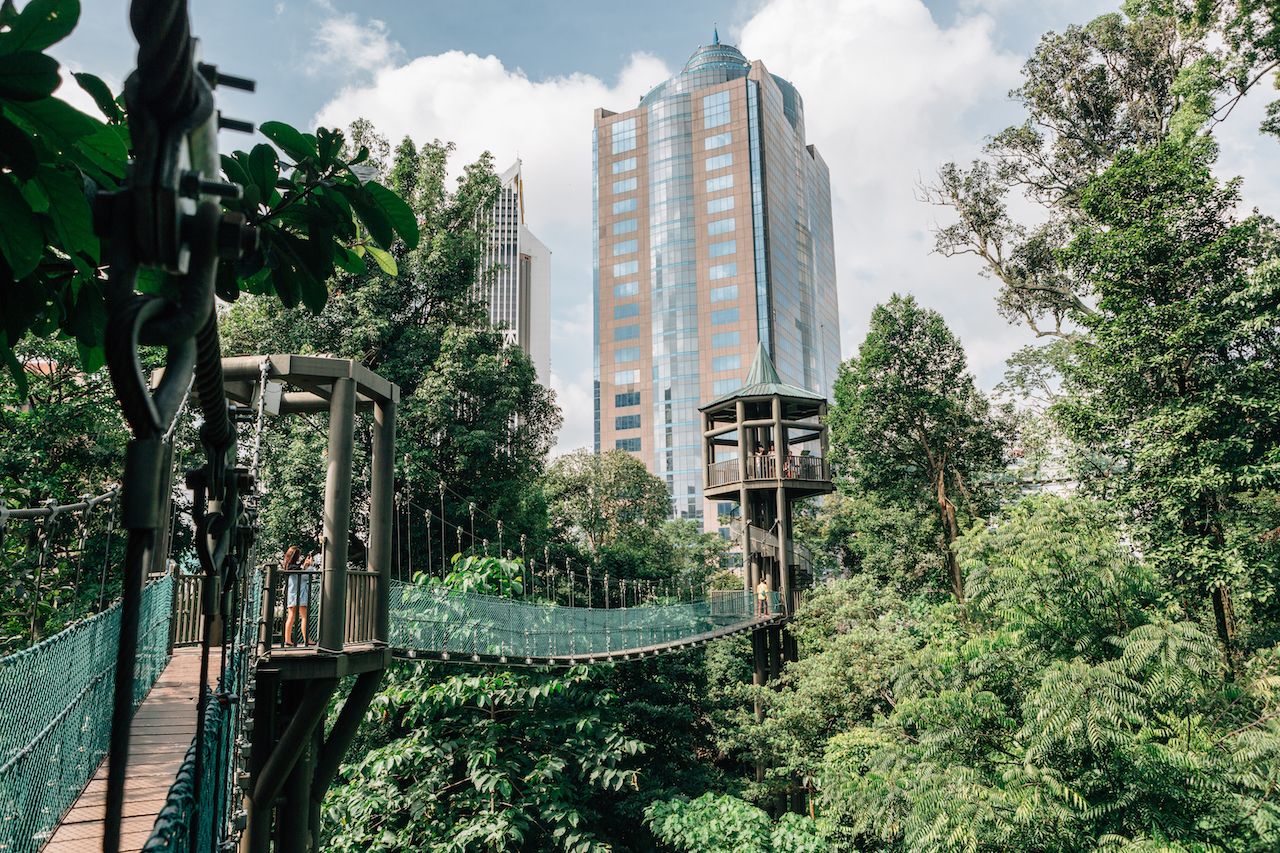 After you’ve eaten to your heart’s content, partied until sunrise, and shopped until your bank starts getting alarmed, you could take a break the urban excess and head to the KL Forest Eco Park. Formerly known as the Bukit Nanas (Pineapple Hill) Forest Reserve, this is one of the oldest forest reserves in the country. The three-acre area houses a range of tropical flora and fauna. The canopy in the trees is particularly exciting as it gives the sensation you are walking on air through dense forest trees. Entry is free, and there is also a children’s playground and a wooden gazebo offering sweeping views of KL. 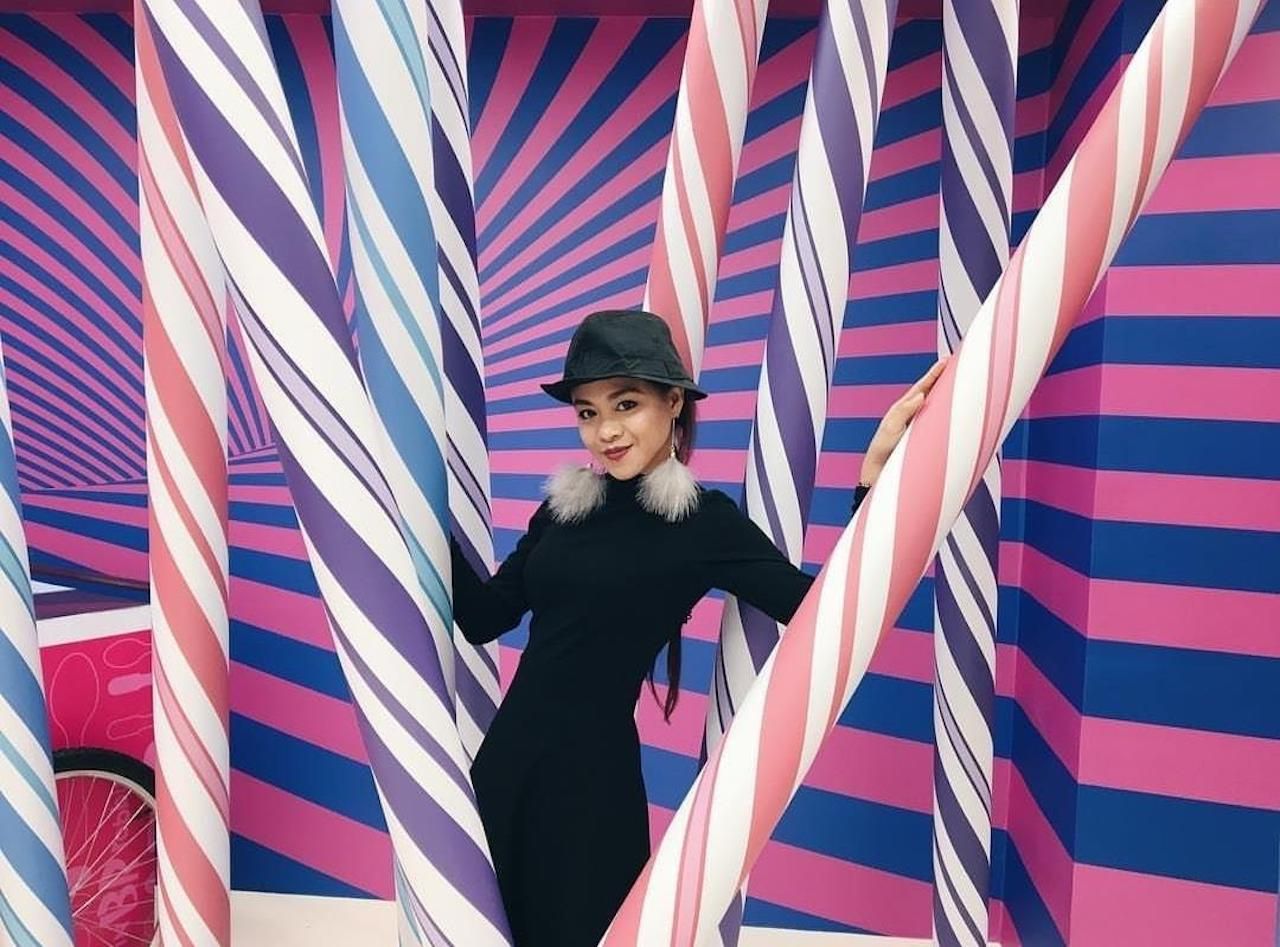 Or go on all in and hit up the most guilty-pleasure-worthy attraction in the neighborhood: the Selfie Museum. Yes, you can now visit a colorful, candy-sprinkled museum dedicated to the art of selfies. Before you dismiss this idea as millennial self-indulgence, the idea behind the concept came from how families bond when they eat and take pictures together. It is also important to bear in mind that apart from posing with the desserts, you get to eat them too. There are nine delectable dessert-themed rooms and five Malaysian inspired desserts. The museum was supposed to be closed by now, but its run keeps getting extended due to popularity. Even if it does close for a bit, the chances of it coming back are strong.

While here you should also take in the spectacular views from the Menara KL Tower. Standing at 1,380 feet tall, the Menara KL Tower has a viewing deck that is 330 feet higher than the Twin Towers Skybridge. Expect to see miles and miles of the city from a unique angle. If hunger hits, the tower also has a revolving restaurant, Atmosphere 360.

If you’re prepared to walk 30 minutes, visit the oldest Hindu temple in Kuala Lumpur, the Sri Mahamariamman Temple. It has a main prayer hall, as well as intricate carvings of Hindu deities with precious stone and gold embellishments. The Chan See Shu Yuen Temple is the oldest surviving Buddhist temple in Malaysia. You can say a silent prayer or admire the gold-plated shrines and colorful pillars that pay respect to ancient Chinese history. In both places, you will be required to take your shoes off, and unfortunately, there are occasions when shoes have been stolen. Bring a plastic bag to place your shoes in, and bring them along with you to safeguard your footwear. 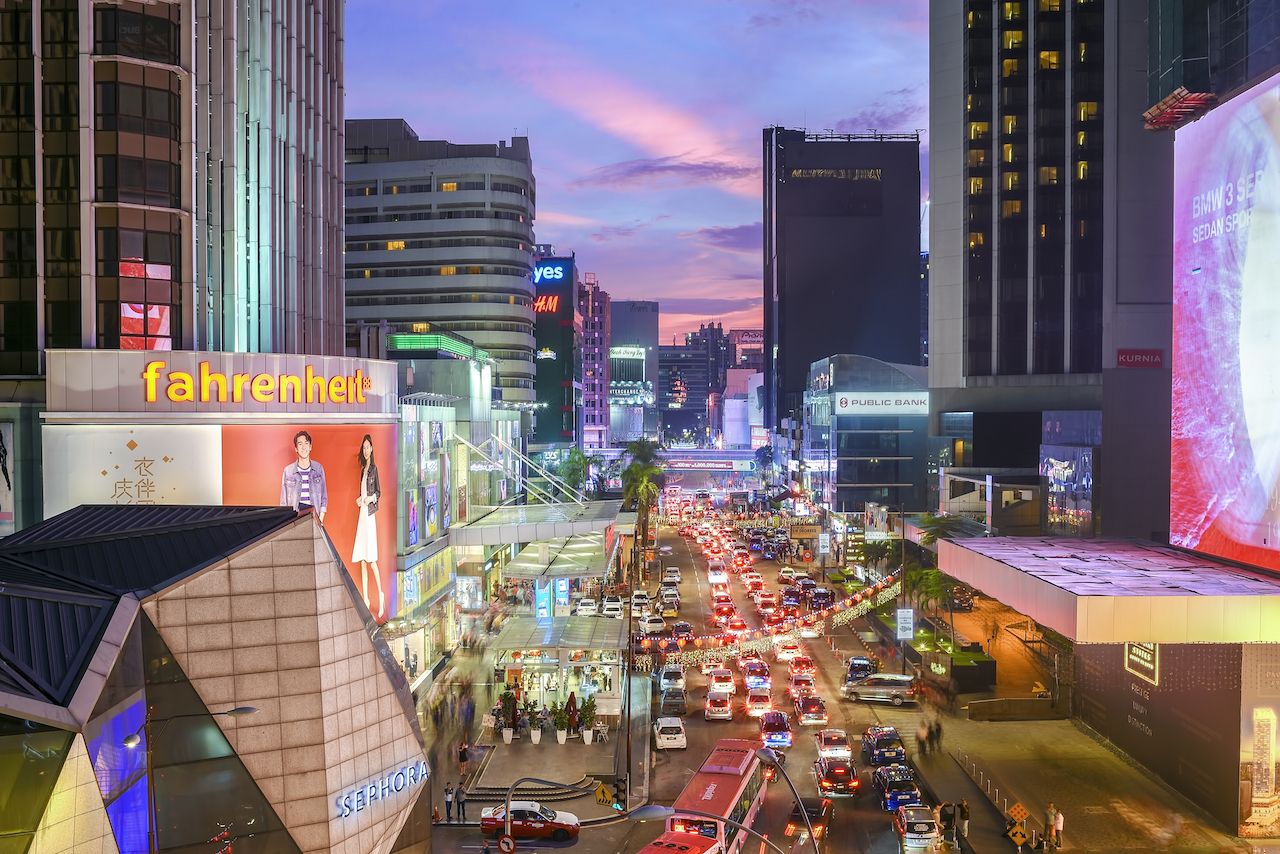 A range of accommodations will suit many budgets, all within close proximity to food and shops. If you’re looking for glitz and glam, opt for the JW Marriott KL or the Ritz Carlton. Both are walking distance to the Bukit Bintang malls and no more than a 20-minute walk to the Petronas Twin Towers and Suria KLCC, a massive shopping mall nearby. Try the sumptuous buffets to sample award-winning Chinese-Malaysian cuisine. You’ve never had mall food that wowed you like this.

Alternatively, you can check out the boutique hotels WOLO and the Kuala Lumpur Journal Hotel. The latter has an infinity rooftop pool while the former has its own in-house bakery. If you visit WOLO, be sure to order the eggs benedict breakfast. It’s their specialty, and experienced travelers to Asia who also happen to be fans of a Western breakfast know that a good one can be a rare find.

How to get to Bukit Bintang 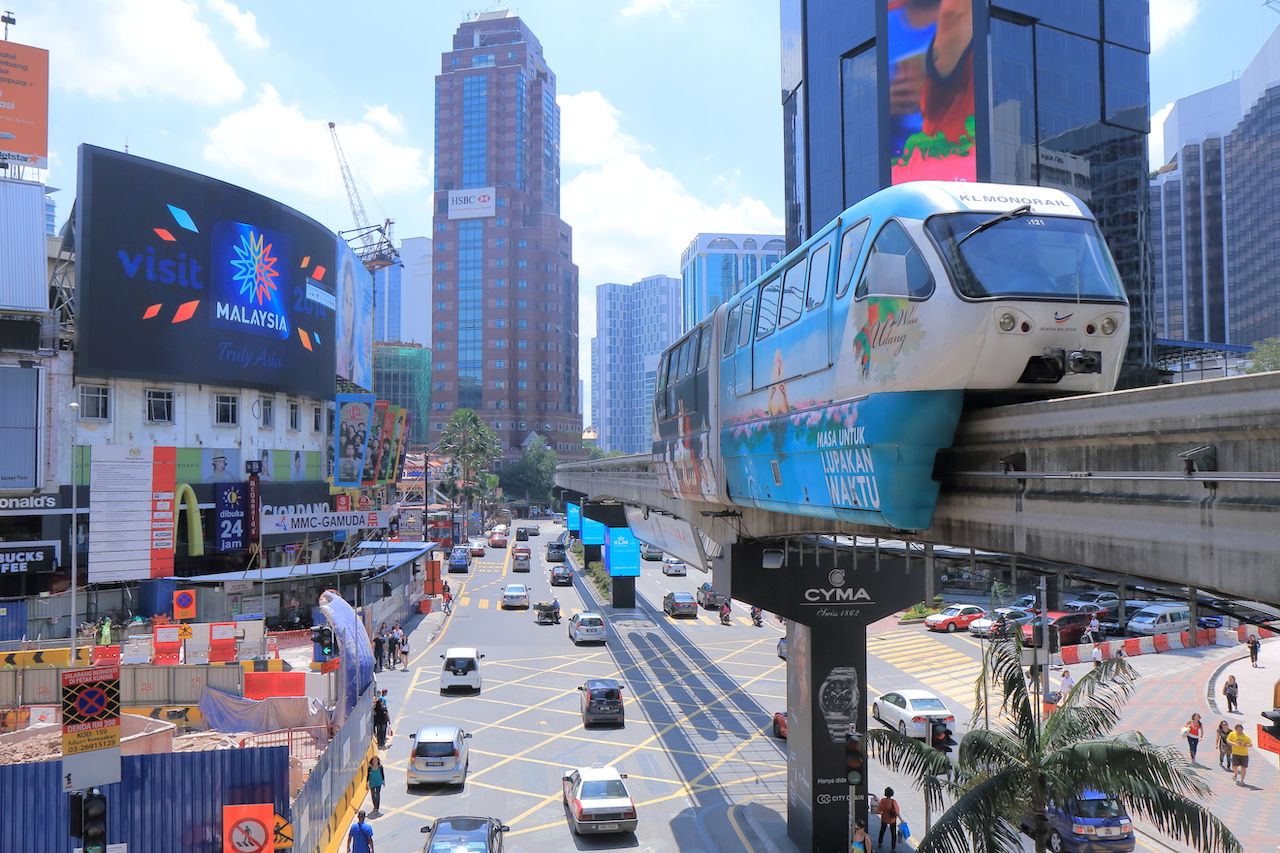 Generally, most people take Grab, a ride-hailing app similar to Uber, from the KLCC train station as the prices are quite reasonable. The company actually merged with Uber’s Malaysia operation, so you’re going to have to download Grab if you want to hail rides in the city. It shouldn’t cost more than RM5, or about $1.25.

You can also get to Bukit Bintang by train via the MRT Sungai Buloh-Kajang (SBK) line or the KL Monorail. Both will take you directly to the Bukit Bintang station. If you’re traveling from KL Sentral, (one of the main train connections ), you can alight the SBK Line via Muzium Negara, which is a five-minute walk from KL Sentral. If you’re coming in from Kuala Lumpur International Airport, a Grab ride should run about RM80, or $20. The neighborhood itself is highly walkable, so you won’t need a car and generally shouldn’t need to hail rides unless you plan to head to other parts of town.

If you do decide to rent a car and park in the area of Changkat, note that parking is difficult to find. Often you will encounter parking attendants manning free parking lots. If you park, they expect a fee, and if you refuse to pay, your car may be damaged when you return. Sometimes it’s worth paying the small fee to avoid any hassles.

Insider GuidesHere’s Why Da Nang Needs To Be on Your Travel Bucket List
Tagged
Culture Insider Guides Kuala Lumpur, Malaysia
What did you think of this story?
Meh
Good
Awesome

On a Street-Food Mission in Kuala Lumpur's Chinatown