Men wearing terrifying masks depicting demons with twisted horns, long noses, and protruding teeth swing violently back and forth. Their trance-like dance down the streets of Pernik, Bulgaria, is accompanied by the chaotic sound of the bells they wear around their belts. While it looks like a Halloween parade for adults, the event has nothing to do with the beloved fall holiday; Bulgaria’s Surva Festival, also known as the International Festival of the Masquerade Games, is a celebration not meant to conjure evil spirits but to chase them away.

When does the festival take place and what are its roots? 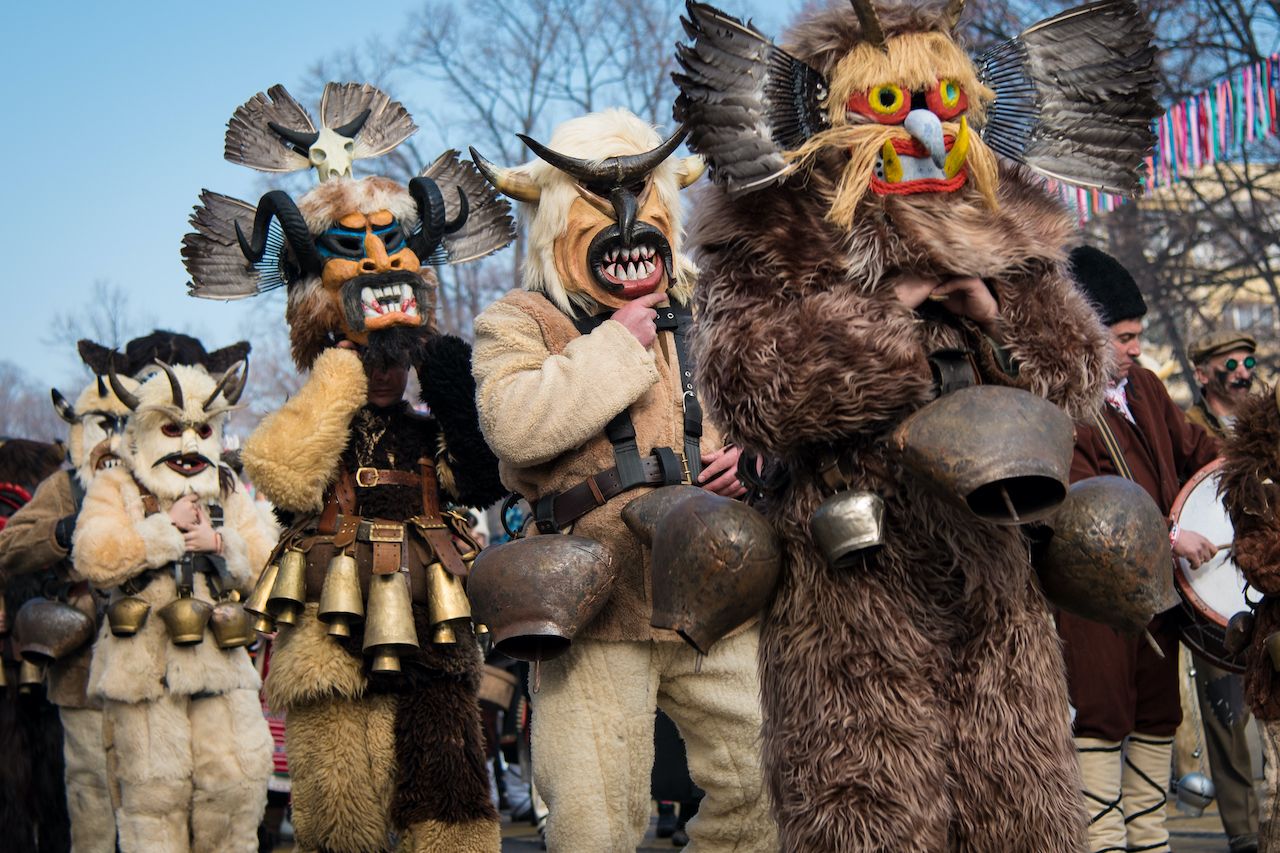 The Surva Festival is an annual, two-day celebration and contest held in the small town of Pernik located in eastern Bulgaria, just 30 minutes from the capital city of Sofia. The event takes place exactly 49 days before Eastern Orthodox Easter so the precise date is determined on a yearly basis as Easter itself shifts, but it is generally held in the second half of January. The Pernik Festival first took place in 1966 and has gained international popularity thanks to the participants’ intense performances and elaborate costumes.

Bulgaria, a small Balkan nation founded in 681 CE, has a rich folklore tradition filled with superstitions. Up until the 19th century, sudden misfortune was generally attributed to evil spirits. Even to this day, when somebody breaks a limb or loses their job, their grandmother might say that a jealous person cast an evil spell on them, known as uruki. The role of the Surva Festival is precisely to scare any ill-mentioned spirits away and bring good luck, but it’s also a fun celebration of Bulgarian folklore.

Who participates in the festival and what happens during it? 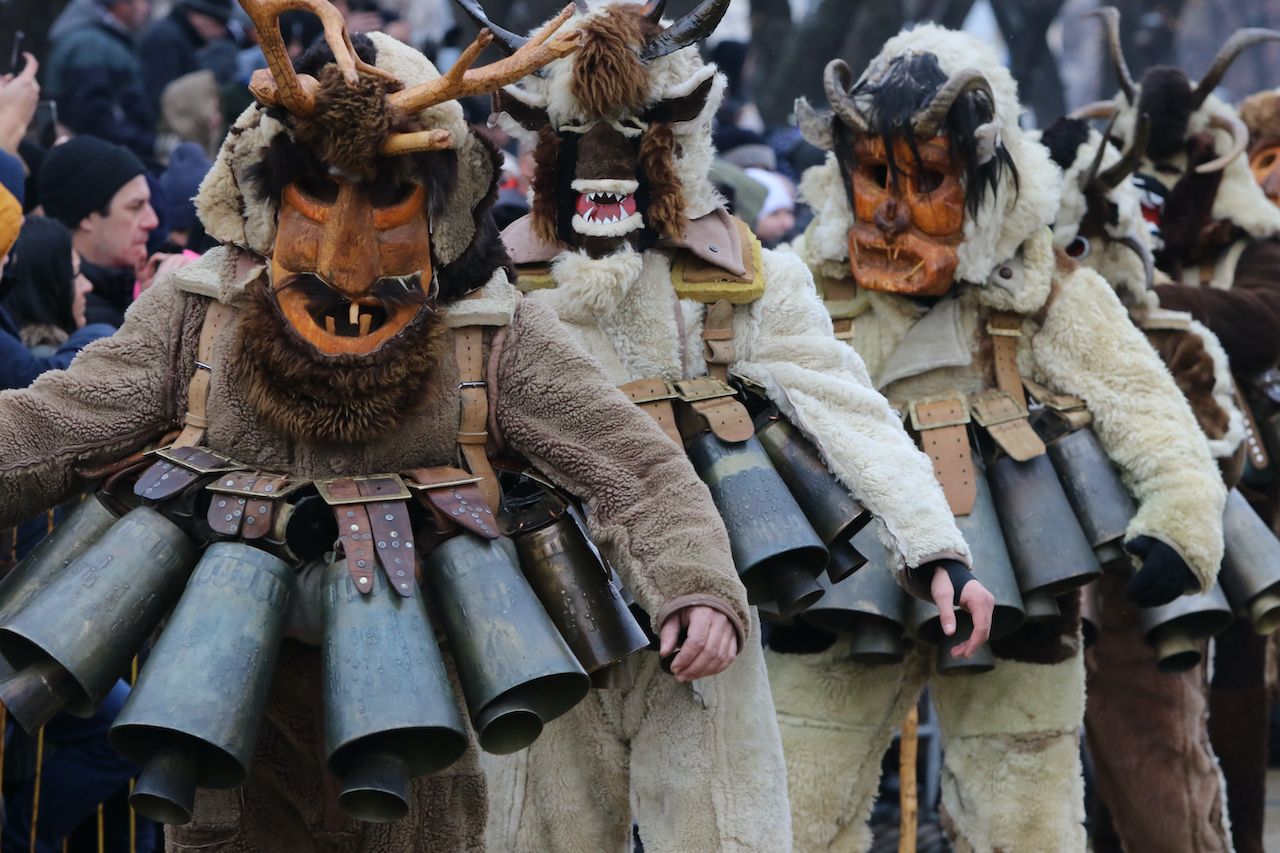 During the festival, unmarried men and women from different folklore regions of Bulgaria and Europe are welcome to take part in the event, which consists of dancing, games, and the act of surva itself. Participants are judged for their costumes and performances.

Male performers are known as kukeri. They dress in elaborate costumes that involve large, scary masks depicting the devil. Their garments consist of a nosiya, a traditional Bulgarian ensemble, and poturi, which are traditional shoes from the 18th century. Many of the men wear oversized fuzzy costumes made of wool or fur with a set of bells hanging from their belt. The furry costume symbolizes the connection between man and nature. The size of the costume — which is often much too big and heavy to fit comfortably — is meant to emphasize the intensity of the threat that it represents. Others wear masks decorated with beads and embroideries, or costumes of papier-mâché depending on their local traditions. 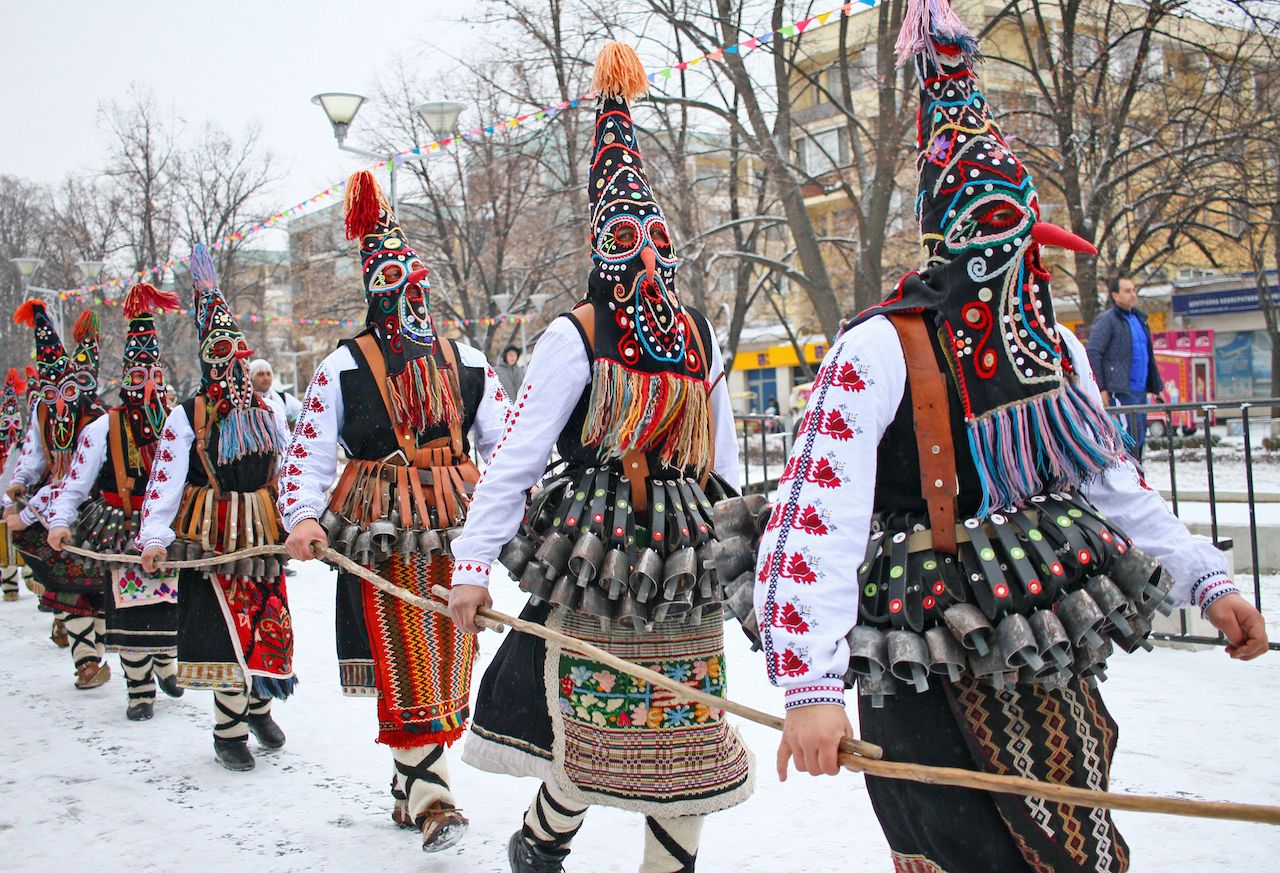 The women, on the other hand, are dressed in much lighter attire that consists of a nosiya with a long skirt, flowers in the hair, and traditional leather tsarvuli as footwear. 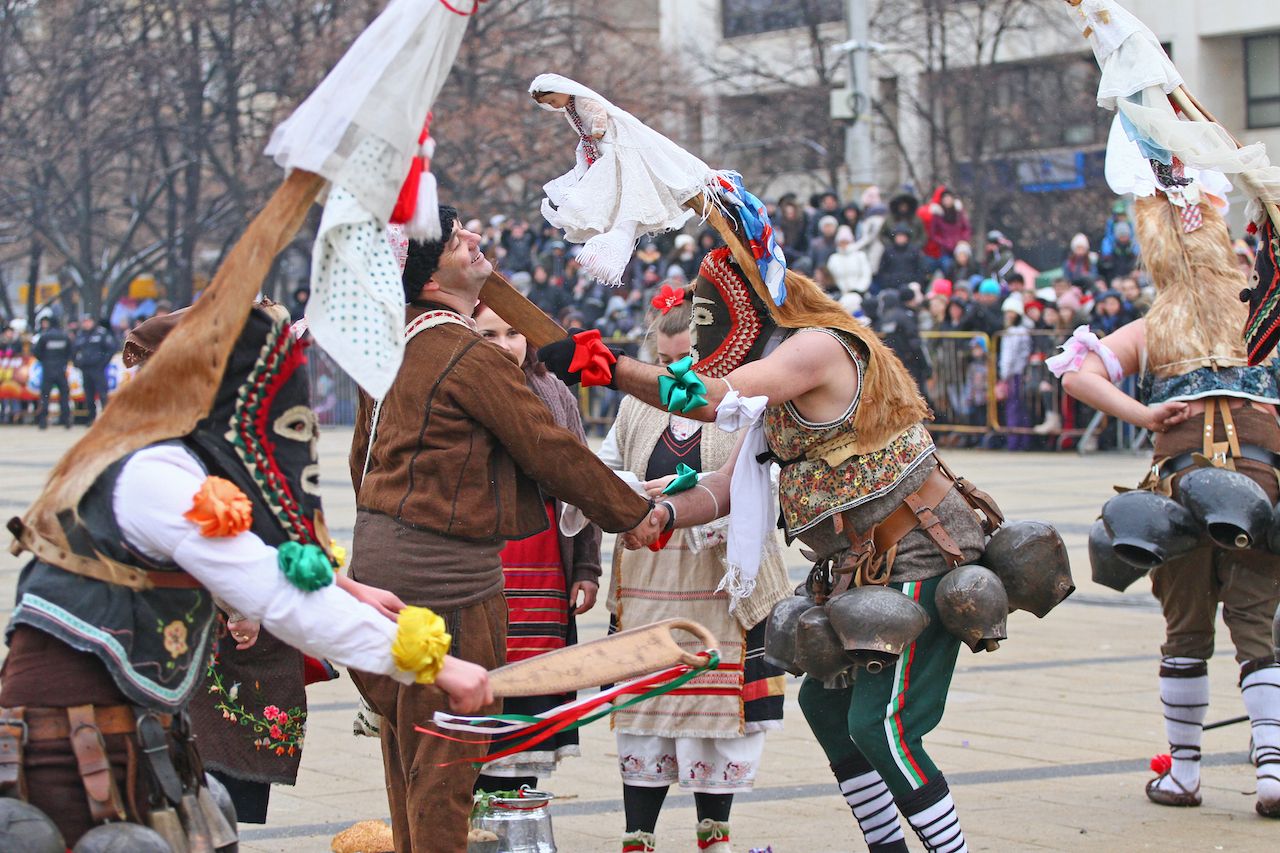 The Surva Festival includes elaborate dancing, perfectly-staged fictional fights between good and evil, and the carrying of lit torches at night to chase the evil away.

The act of surva itself, known as survakane, consists of participants named Survakar to lightly tap festival attendees on the back with a tree branch decorated with ornaments made of cotton, gold or silver coins, flowers, and colorful string, most often red. The gesture is meant to bring good luck and prosperous health in the upcoming year. According to tradition, the person who has received the tap should reward the Survakar with a few coins or a bill for their service. 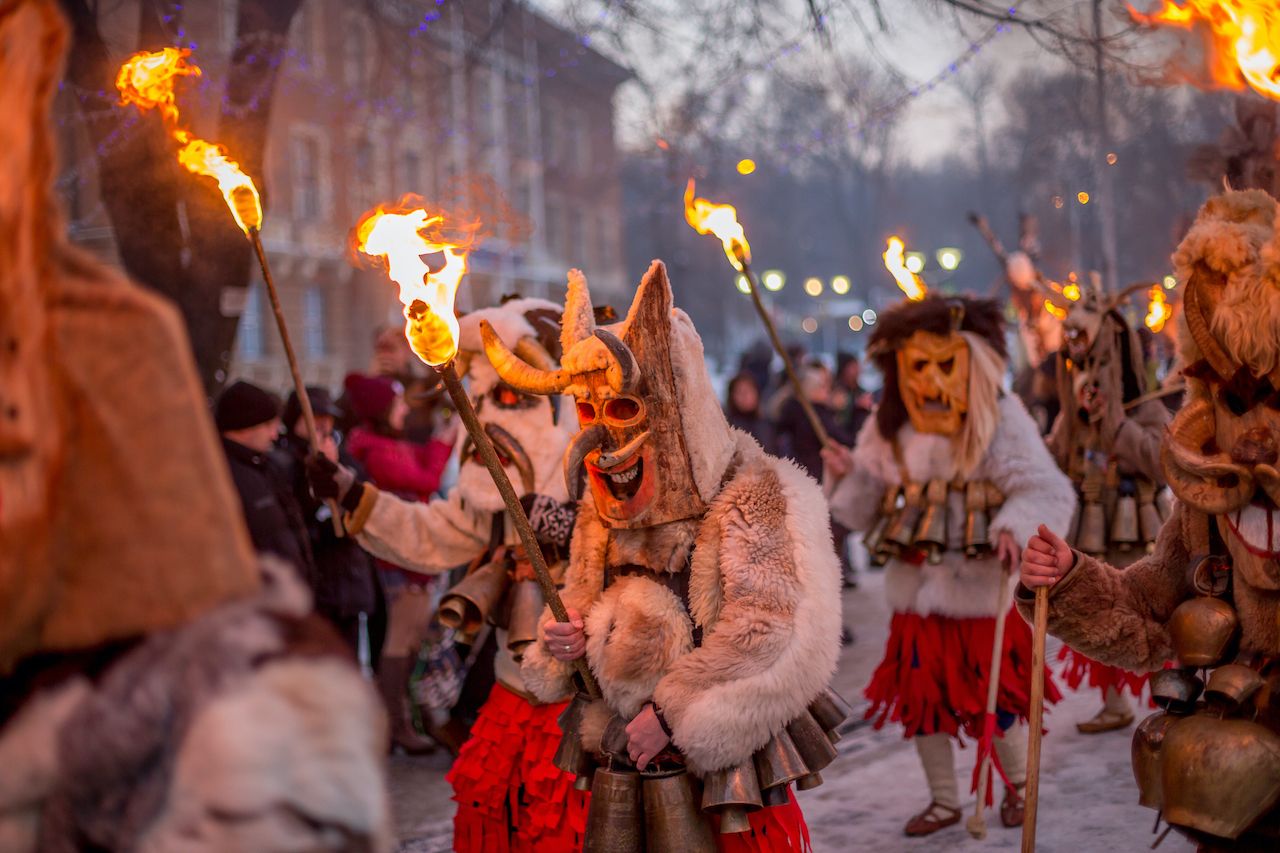 In a typical Bulgarian fashion, the celebration is complete with large tables covered in food ranging from grilled kebapcheta and kyufteta (traditional grilled sausage and meatballs), to the crumbly, cheesy, and buttery pastry known as banitsa, and copious amounts of plum brandy. 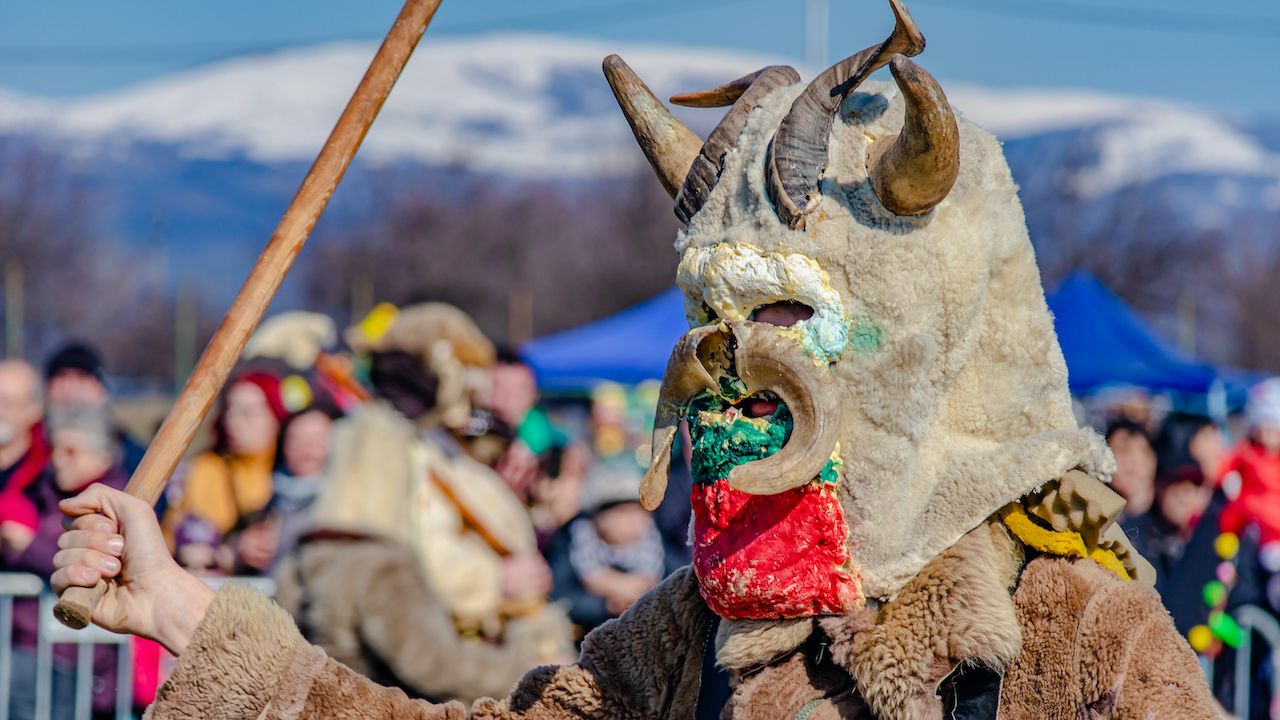 The Surva Festival is a deeply cherished tradition in Bulgaria. Due to its nature of well-wishing and the showcase of local tradition and artisanal attire, it continues to draw an average of 6,000 people or about 100 participating groups from every folklore region of Bulgaria. In 2015, the Pernik Surva Festival was inscribed on UNESCO’s Representative List of the Intangible Cultural Heritage of Humanity.

FashionBulgaria’s Folk Dress Is More Than a Beautiful Garment. It Displays Personal History.
Tagged
Festivals Religion Bulgaria
What did you think of this story?
Meh
Good
Awesome

Bulgaria’s Folk Dress Is More Than a Beautiful Garment. It Displays Personal History.