Balkan temperament, a culture based around community, and a fierce love for the native land binds Bulgarians together tightly. When times are bad, the nation unites and remembers that family, a central pillar, will be an endless source of support. When times are good, Bulgarians throw on the neatly pressed folk dress known as nosiya, join hands in the wonderfully dynamic line dance that is horo, and celebrate in a lavish display of togetherness, often accompanied by copious amounts of cheese, sausage, brandy, and music. 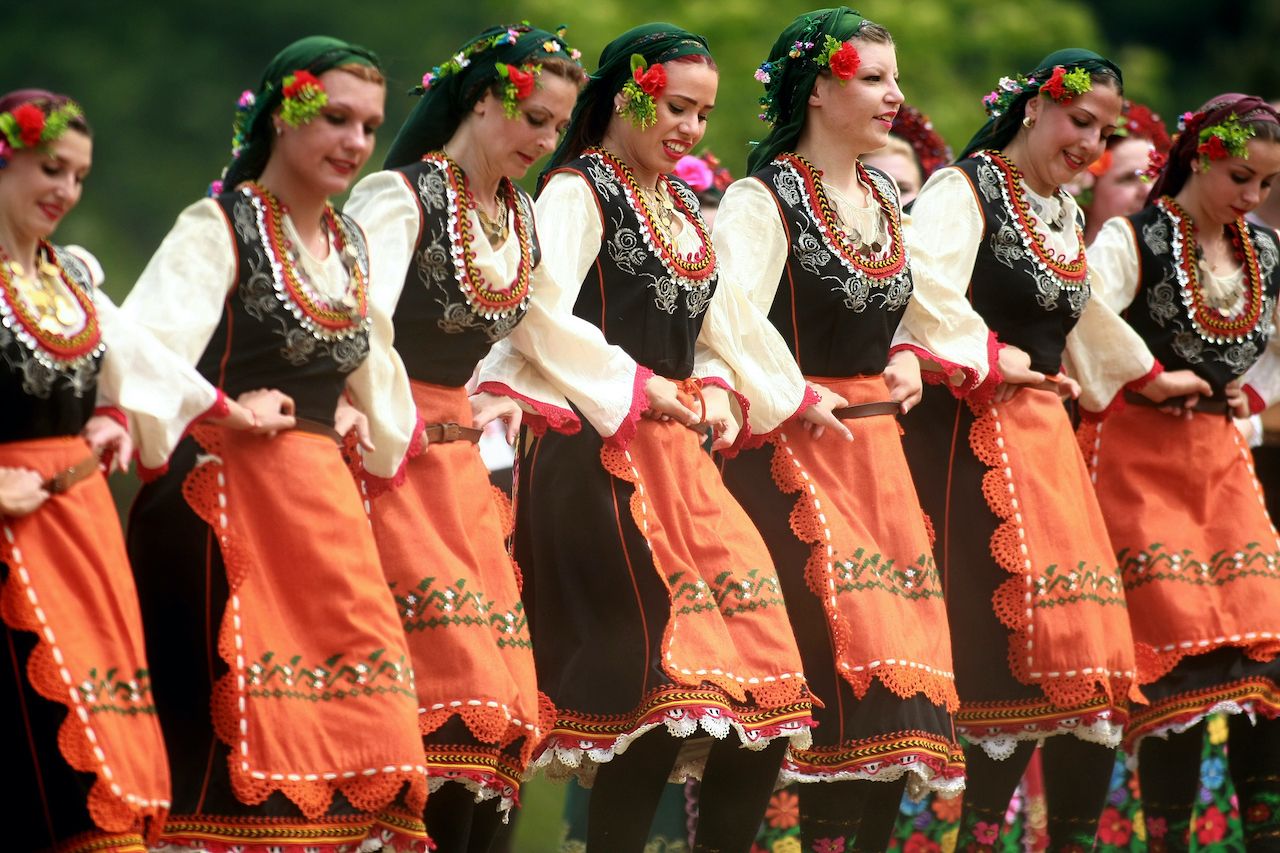 Bulgarians pride themselves on being from a nation that has withstood slavery, bloody wars, hunger, and economic hardship, and as such, they have an immense reverence for their culture and always wear their nosiya with a great sense of pride. The folk dress serves as the key to one’s personal history. Its intricate sleeve patterns show whether a woman is married or available, and the shoes of a man’s nosiya are a tell-tale sign of whether he is a farmer or a warrior.

While the nosiya is no longer daily attire, Bulgarians have come up with dozens of annual festivals where they can throw one on, such as the first day of spring, the fall harvest, or New Year’s Day.

Whenever a celebration involves folk dress, you can fully expect a bagpipe orchestra to gather for a live performance of Byala Roza and Boryano, Boryanke. What follows is a long line of dancers, hands firmly joined, performing a horo that sometimes winds around an entire block. Anyone is welcome to join, regardless of age, and the steps are often easy to follow as long as you pay attention to your neighbors on either side. Luckily, the leather shoes that go with each nosiya are comfortable and allow you to dance the night away pain-free.

Bulgaria’s folk dress patterns vary by region and are closely tied to nature. 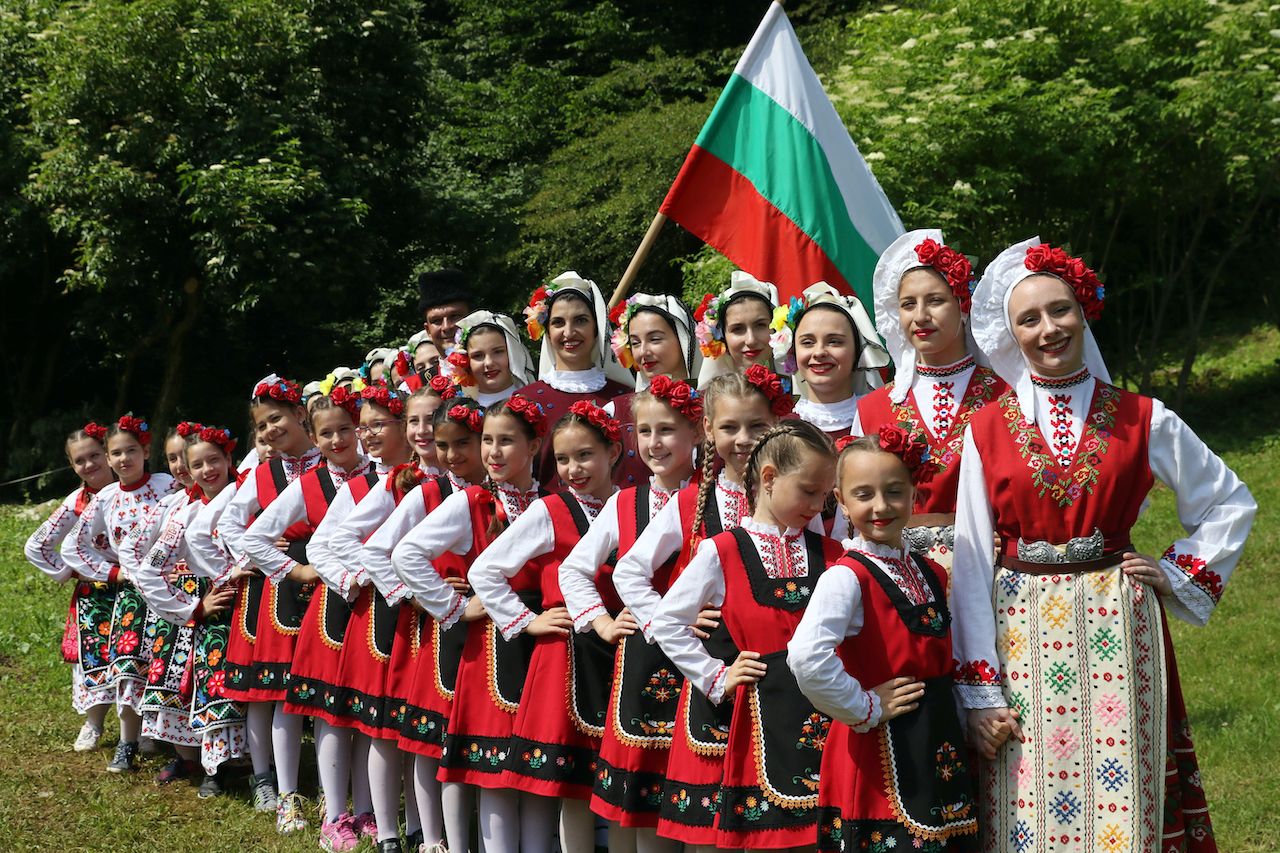 Although it is a small country that can be crossed in fewer than five hours, Bulgaria has seven distinct folklore districts. Northern Bulgaria, Trakia, Shopluk, Dobrudhza, Macedonia, Strandzha, and the Rhodope have their own traditional song and dance, and corresponding folk dress. Each article of folk dress consists of a few main components. For women, that is a head accessory decorated either with roses or gold coins and a dress (nosiya) that most often goes below the knee. The female nosiya has two embroidered aprons — one in the back and one in the front, symbolizing the woman’s role as the homemaker and a hard worker who runs the entire household. The aprons are fastened by a belt that is made of silver, bronze, or fabric such as silk and linen.

The male folk dress consists of a tall hat made of fur, a white shirt to convey decency of character, sturdy pants called poturi, an embroidered vest, and a wide red belt. The belt is reminiscent of the Bulgarian freedom fighters of the 18th century when it was used to carry weapons such as daggers and knives. 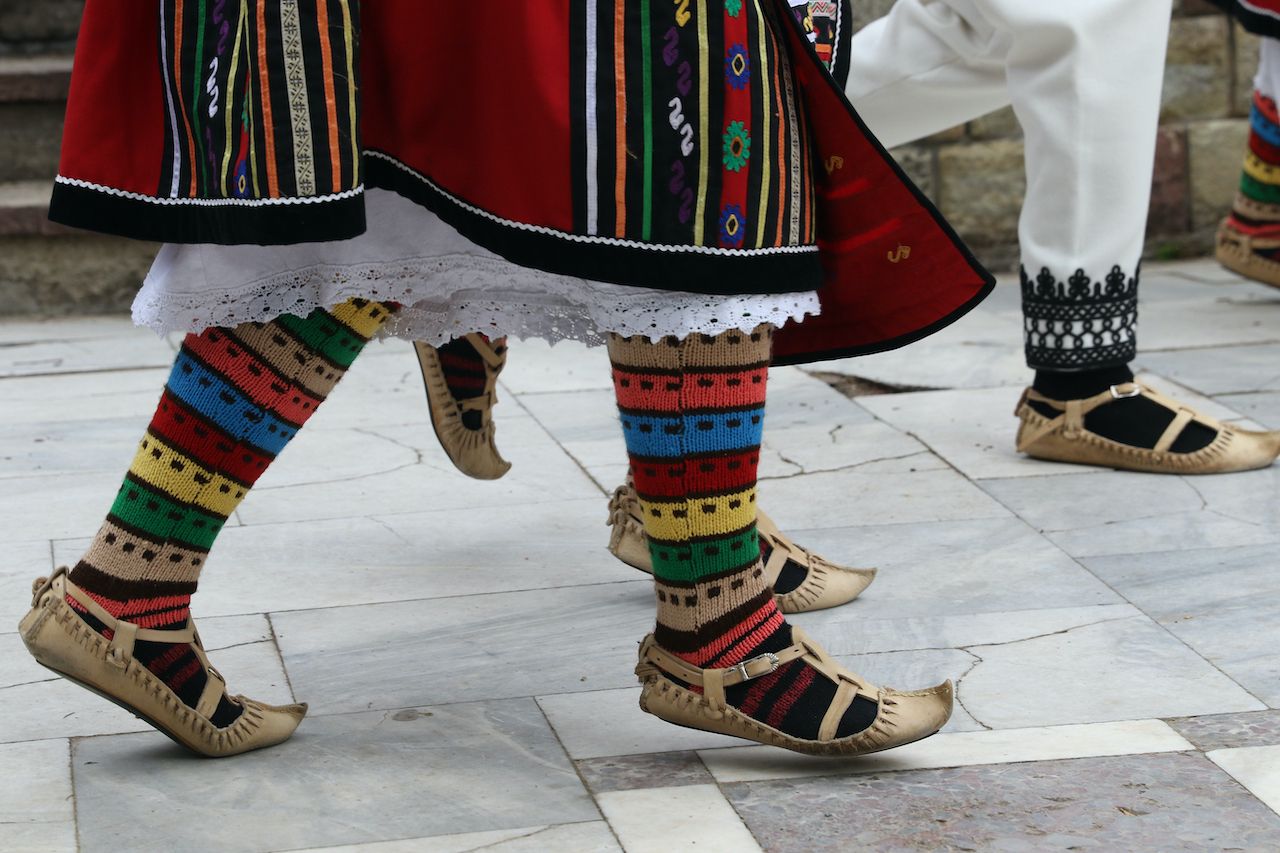 Both the male and female folk dress have distinct shoes. Women wear leather slippers named tsarvuli, which are suitable for muddy, uneven terrain. Sometimes, men can be seen wearing tsarvili, too as the shoes are genderless and versatile, but they also wear tall boots that can endure long days of pilgrimage, trekking, or even a battle. The boots symbolize a man’s role as a protector and a soldier while the leather tsarvuli signify that he does agricultural work close to home. Festivities aside, if you visit an agricultural region of the country today, such as the northern part closest to the Danube river, you’ll see locals sport tsarvuli as everyday footwear as they tend to their livestock. 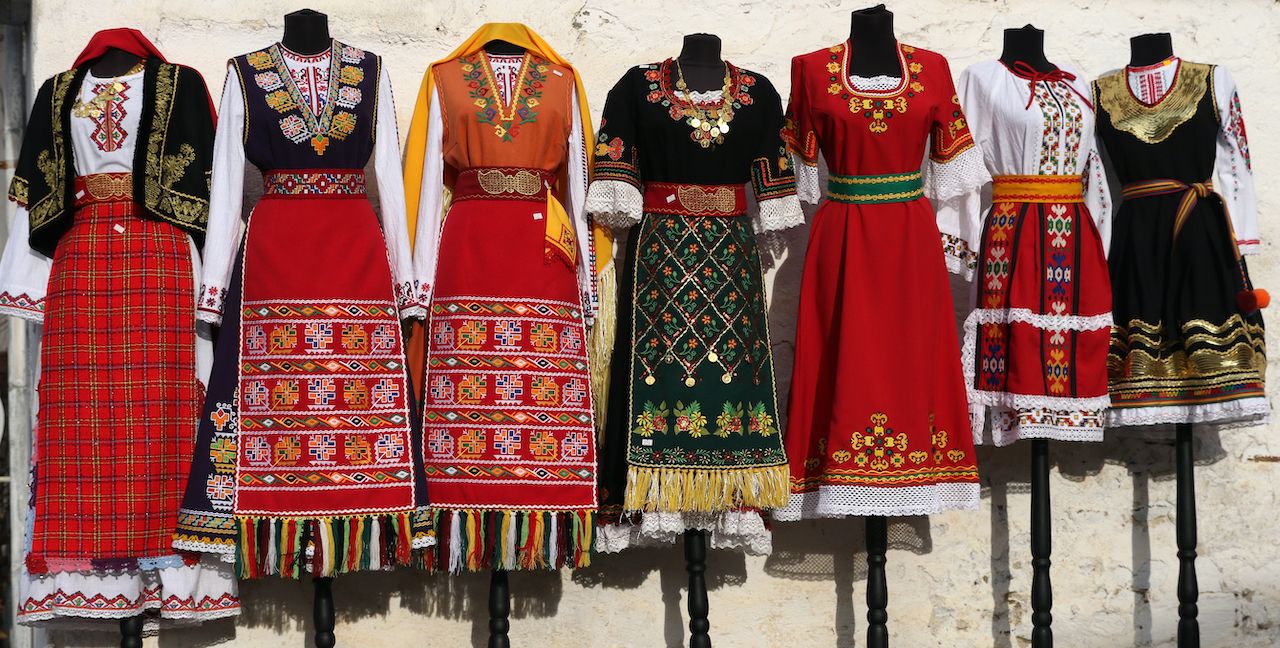 You can always tell where a Bulgarian is from based on their nosiya. Residents of Trakiya put a big emphasis on the embroidery of the women’s frontal apron and shirt sleeves. If a woman is from the Danube region, her belt would be tied around her waist multiple times and the emphasis of pattern would be on the back apron. In the south and southwestern regions of Bulgaria, the female nosiya’s front apron is single-color — either red or black. In the Rhodope region, women have only one apron instead of two. Rhodope women tend to opt for pale colors, such as a yellow-orange hue or grass green to demonstrate their connection to nature. 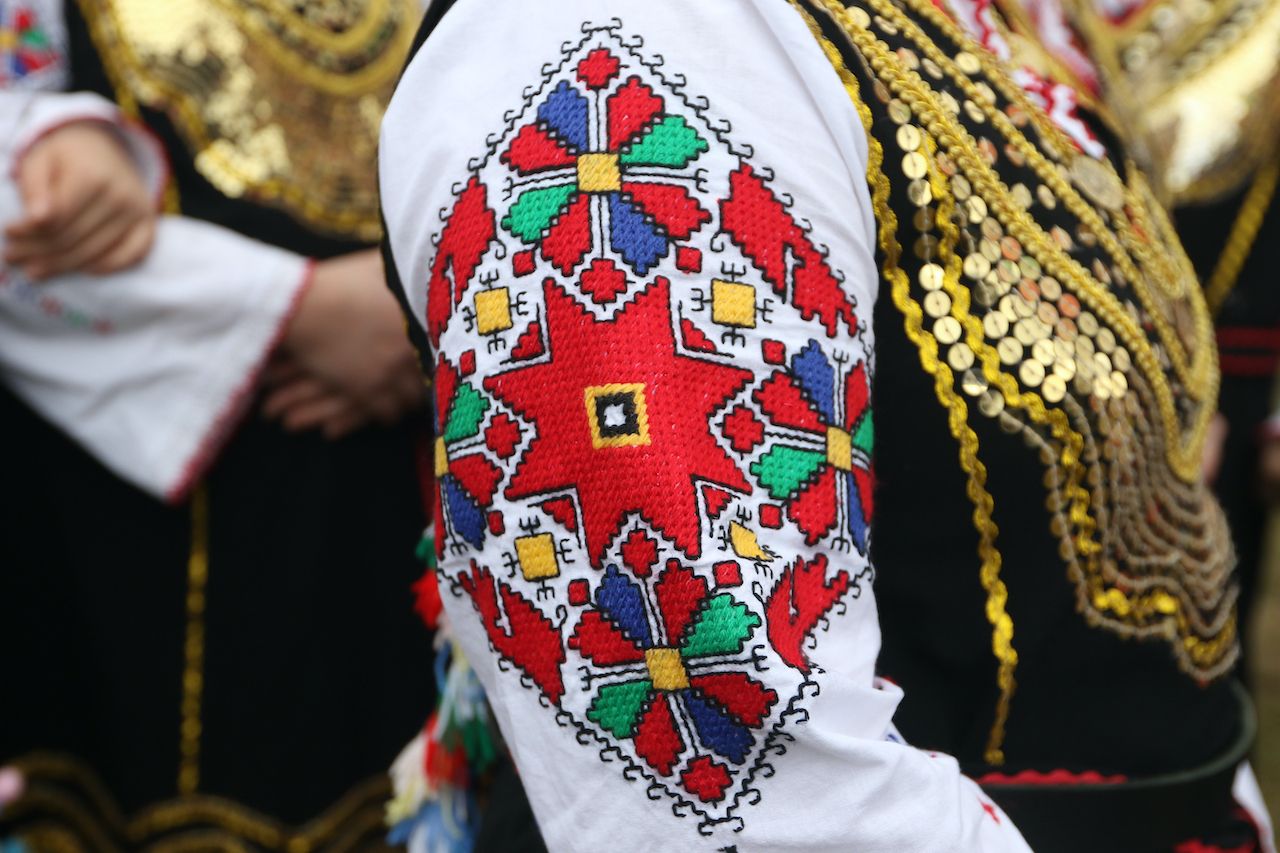 Not only that, but you can always tell a woman’s marital status by her dress. If the woven pattern is simple and in the shape of squares, then she is single. Triangles on a lady’s apron convey that she’s engaged. If the woman is married, her nosiya will display a pattern of four triangles. The main difference is that a single woman would have a simple dress with fewer patterns and often wear a flower behind her ear that she would gift to her beloved. A married woman would be much more lavishly adorned symbolizing her higher status in society. 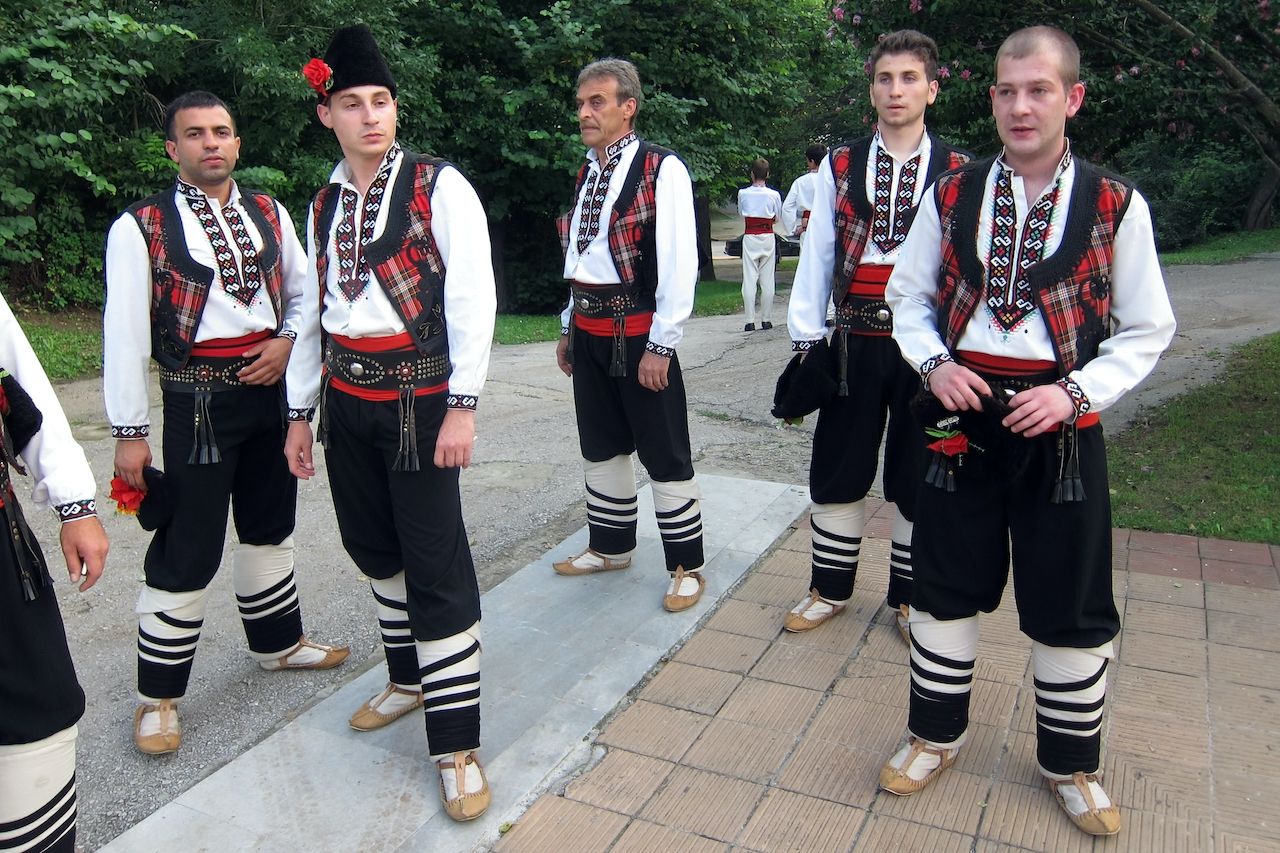 For men, there are only two types of folk dress — a white and a black variety. When it comes to the male nosiya, the difference in style and color is not really based on geography; this ensemble has two stages of evolution so it rather reflects a time period. The white variety of male nosiya came first. It includes long, tight pants, a white linen shirt, and a wide red belt. Later on, during the second half of the period known as the “Bulgarian rebirth,” in the 18th century, a new style of male folk dress came along — the black variety. The pants here have a lower, looser crotch seam signifying that their owner is wealthy.

Bulgarians used to believe that their folk dress had magical powers.

In the 1800s, folklore dress was thought to be an item that held magical powers. The nosiya was the connection between human and nature, which was of immense importance in this agricultural society. Bulgarians truly believed that the better you cared for your nosiya and the more adorned it was, the more powerful and fortunate you would be. Some even believed that one’s folk dress was the window to their soul, and you could tell what kind of character they possessed by the embroidery on their apron or vest.

Today, we don’t believe in supernatural influences nearly as much, but it’s still common for mothers to remind their daughters once a month to check on their nosiya and make sure it’s stored properly should they need to whip it out on a short notice and dazzle the neighbors with a public performance of ruchenica, or have it ready in case Slavka Kalcheva passes through town for an impromptu concert. 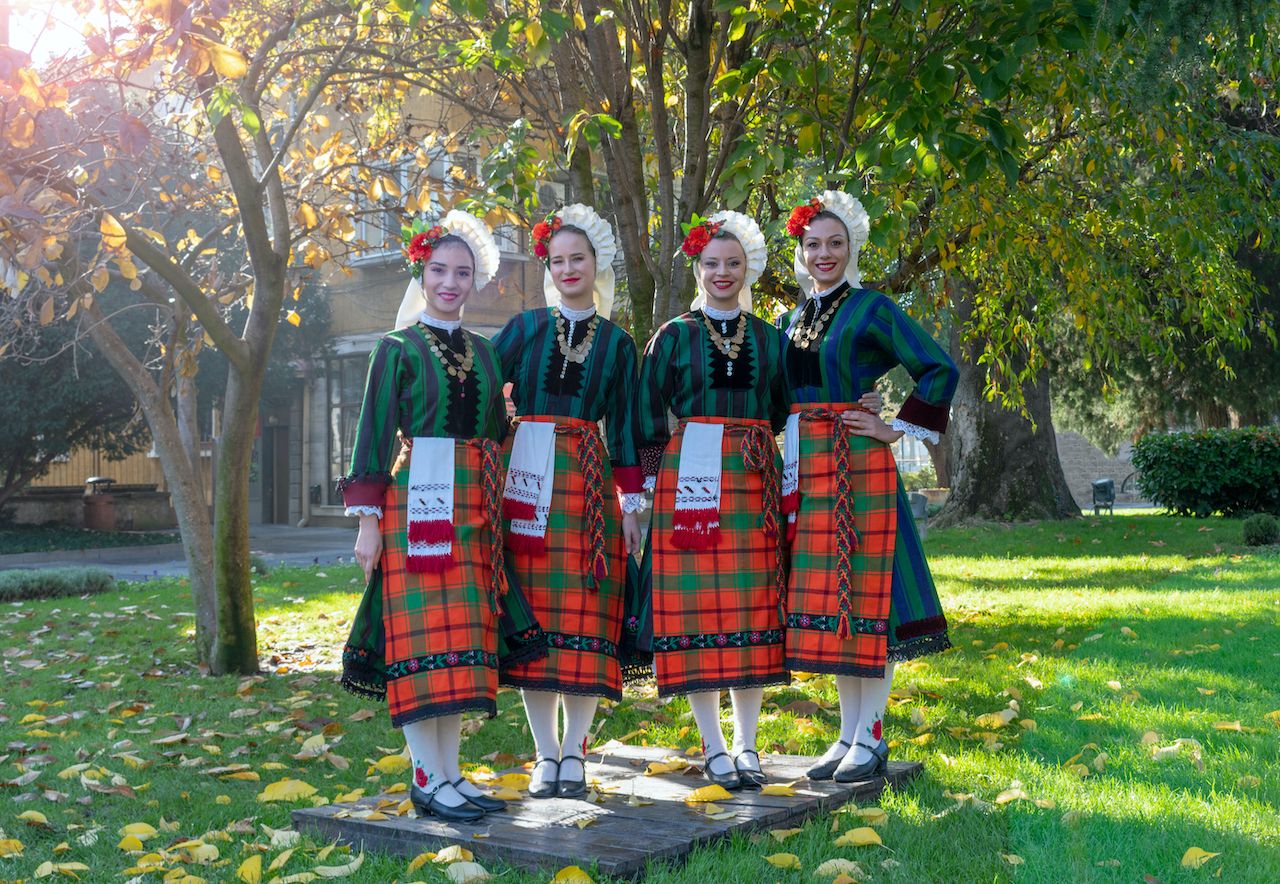 In the last two centuries, each folk dress was handmade and the timing of the sewing was not at all random. It was considered auspicious to sew together a nosiya on Mondays and Thursdays before sunrise. When a white shirt was made for a newborn, the mother had to use a single thread and never let it break, otherwise her lack of patience would symbolize the child’s death. Knowing this fact, some of us are no longer surprised when our grandmothers ask us to go run an errand for them reminding how they labored over our nosiya for days on end without letting the thread break and how we owe them to go pick up some kashkaval from the store for supper.

Even though Bulgaria is a modern European country that has embraced the widespread international fashion trends today, traditional folk dress continues to carry great sentimental and cultural values. Nosiyas can be seen at the Rose Festival in Karlovo, on the first day of spring celebration in Kyustendil during which a dozen young women compete for the title of “Miss Spring,” as well as on March 3 — Bulgaria’s Independence Day. An ensemble made with love according to tradition, our folk dress continues to stand the test of time and unite us.

FashionGreenland’s National Costume Is a Work of Art
Tagged
Fashion Bulgaria
What did you think of this story?
Meh
Good
Awesome