Until it was described in the worst possible light in the 2008 Liam Neeson movie Taken, Albania was little known outside of the Balkans. Travelers had certainly not been crowding the place since the brutal Communist dictatorship of Enver Hoxha that started in 1941 had firmly sealed the nation’s borders. It was only in 1991 that the country deemed the most isolated in the world at the time got rid of communism, held its first democratic election, and started to slowly open up to the rest of the world. But it took over a decade to really get the nation’s tourism industry going; surprisingly, very few had noticed that Albania had 225 miles of gorgeous coastline on the Adriatic and Ionian Seas, just north of Greece and facing the heel of Italy. 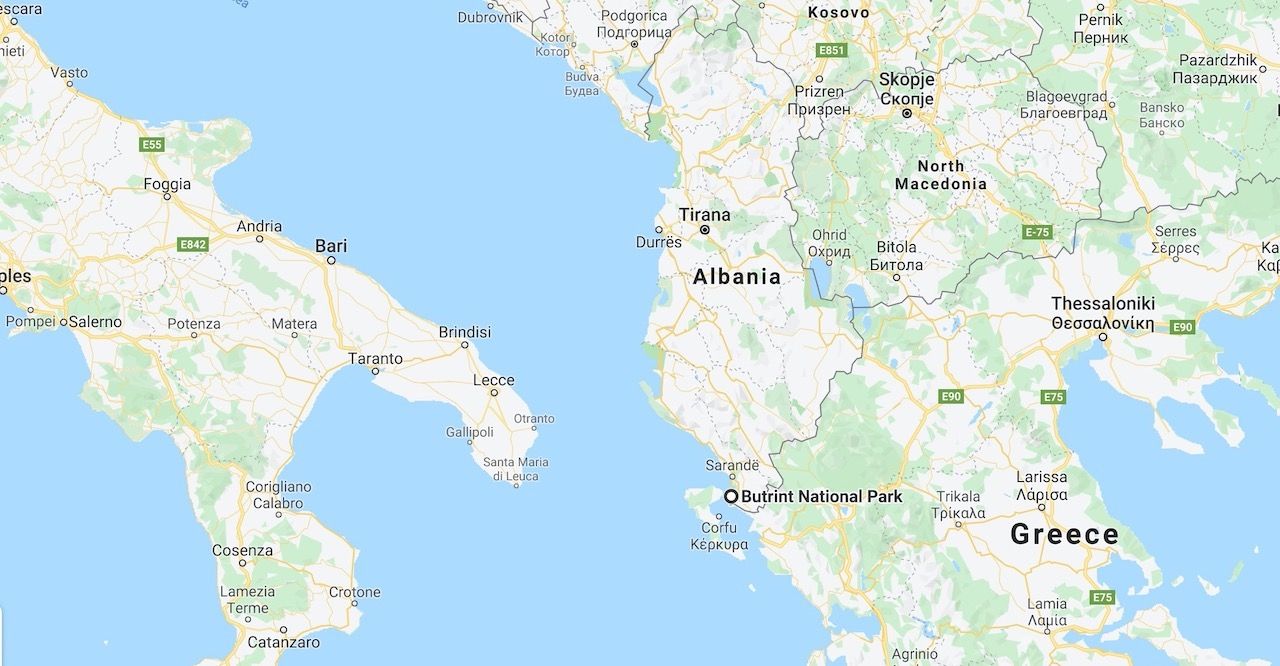 Although it’s not entirely off travelers’ radars any longer, the country is still quiet and mostly uncelebrated. In the summer, the beaches of Ksamil may be packed with sunbeds, tourists, and vacationing local families, but just three miles to the south, there’s one place you can have all to yourself: the ancient city of Butrint. Here is why you should visit Butrint and how to do it in a cinch.

The first Albanian site to be granted World Heritage status by UNESCO in 1992, the 2,500-year-old city of Butrint makes up 11 square miles of the 93-square-kilometer national park of the same name. Butrint National Park is a little less than 12 miles from the Greek-Albanian border. 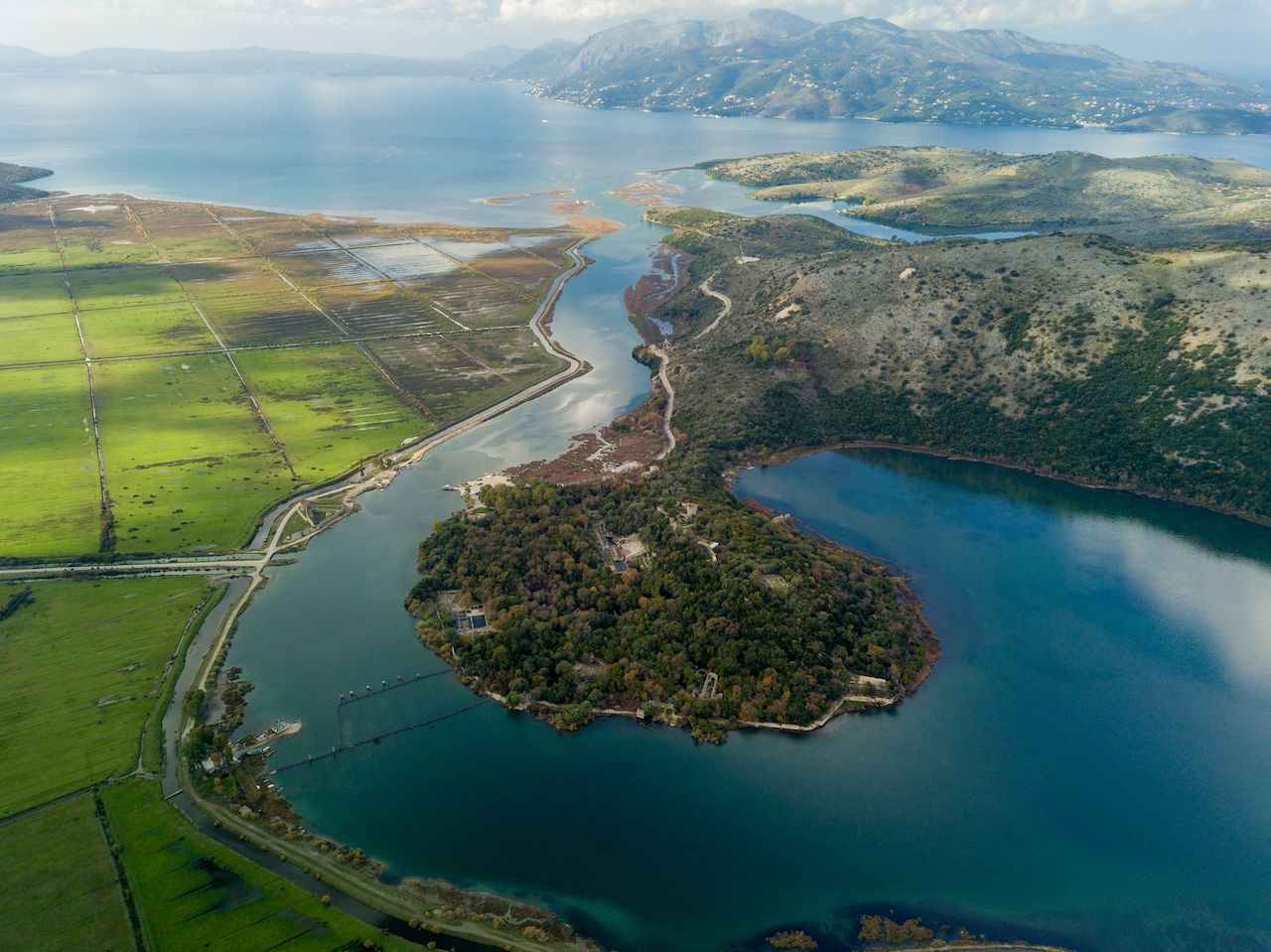 The main part of the Butrint archaeological site, where the majority of the ruins are located, sits atop a forested hill peninsula on the channel that connects Lake Butrint with the Ionian Sea. The views from everywhere on the hill are breathtaking, and stunning picnic spots abound in the form of strategically located wooden benches and tables, so pack a lunch to take with you. The site is open daily from 8:00 AM until sunset (the museum is only open from 8:00 AM until 4:00 PM). Entry costs 700 Albanian lekë (about $6). The rest of the national park, outside of the archaeological site, is free to explore.

The history of the ancient city of Butrint

Greek mythology has it that the city of Butrint, once called Buthrotum, was founded by Andromache and her brother-in-law Helenus, son of King Priam, when they fled a burning Troy. What we really know is that the earliest actual evidence we have of occupation on the site goes way back to 50,000 BC, but it wasn’t until the eighth century BC, when Greeks from the region of Epirus came and settled here, that Butrint became a thriving, fortified city with an acropolis. The Romans took over in 44 BC, making Butrint a colony, building one of their famous aqueducts over the Vivari Channel, and expanding the city on reclaimed marshland. Over the centuries, the city became a Christian center of the Byzantine Empire and then was under Frankish, Venetian, and Ottoman control before it was abandoned.

Must-see monuments on the main site

Butrint’s archaeological site is huge, and the structures of the ancient sites testify to the different occupants, so we suggest you take your time to visit. Allow at least two hours to see the most important monuments and more if you want to enjoy the views properly and check out the smaller sights, which include Roman villas, ancient Greek gates, and Venetian towers. If you’re short on time, here are the top five spots you should absolutely check out. 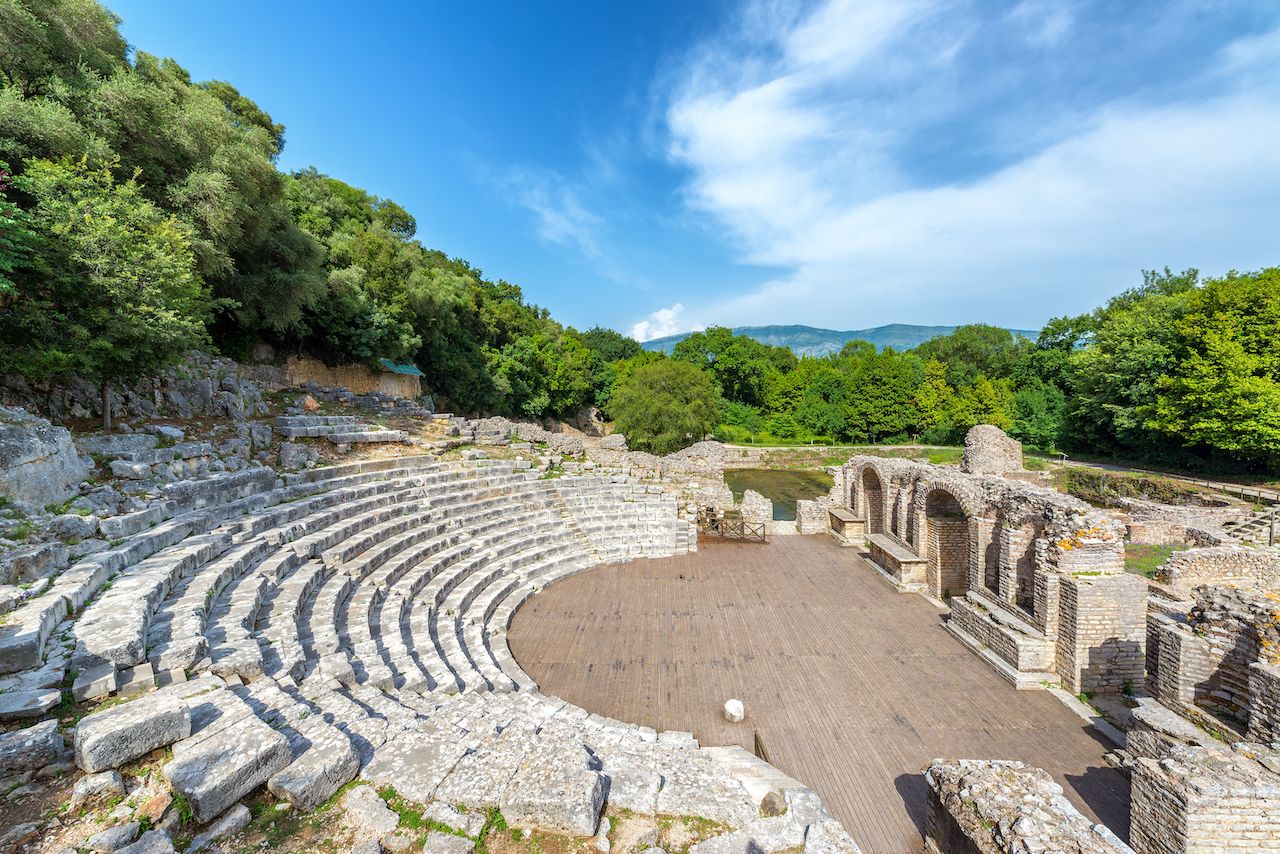 The shaded footpath that leads from the ticket booth to the heart of the site brings visitors directly to one of its most impressive monuments. Built in the third century BC against the slope of the Acropolis hill, the amazingly preserved Hellenistic (and later Roman) theater could accommodate thousands of spectators on its stone seats. It continues to do so, as every year in July its stage hosts some of the performances of the Butrinti Summer Festival.

Traces of a sanctuary dedicated to Asclepius, the Greek God of Medicine, can be found next to the theatre. This is a common sight throughout the Mediterranean as offerings made to the god of medicine often funded the construction of theaters. 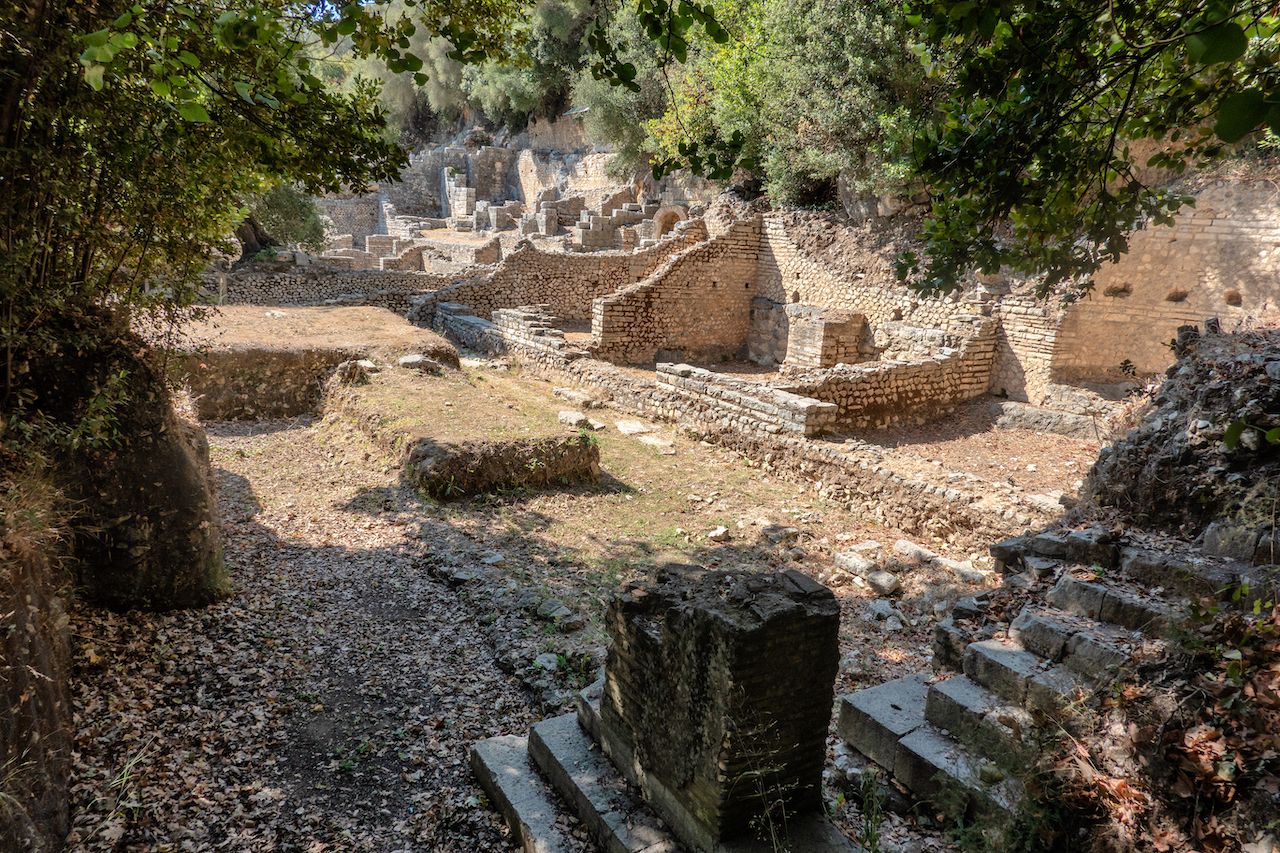 The only Roman forum to be found in Epirus (an important Roman Province and region now shared between Greece and Albania) dates back from the time of Emperor Augustus (27 BC-14 AD). Back in the day, forums were the place you went when you wanted to buy or sell things, participate in heated political conversation, meet people, attend gladiator games, or take a bath (if you were not rich enough to own a private bathing facility). The public bathhouse that can still be seen in Butrint’s Forum was even equipped with under-floor heating long before it was cool. 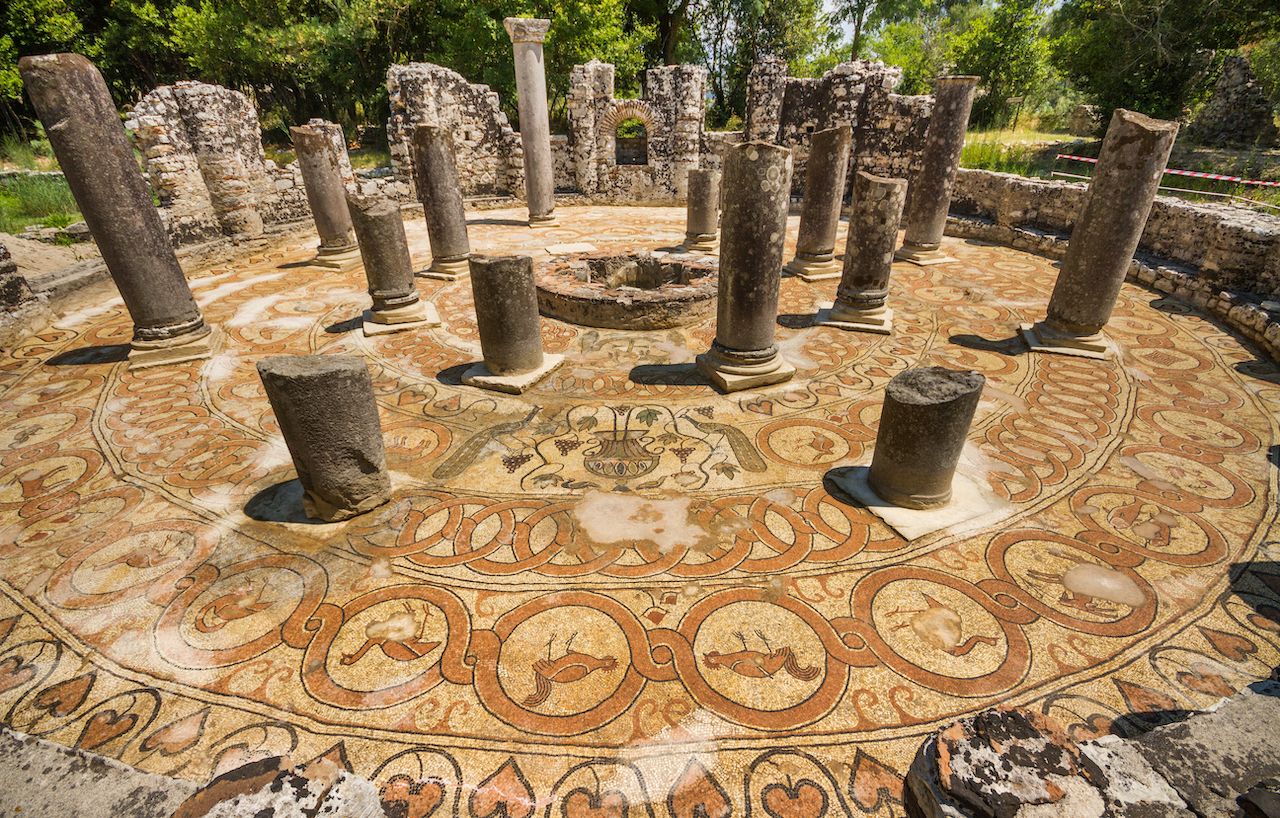 After the Roman Empire was split between East and West, the Byzantines made Butrint an important Christian center. The baptistery that survives to this day was a Roman structure reused for ecclesiastical purposes later on. It features an amazing mosaic floor, displaying animals and an amazing geometrical pattern, which is now sadly covered in a protective layer of sand and only uncovered for a few days every year. 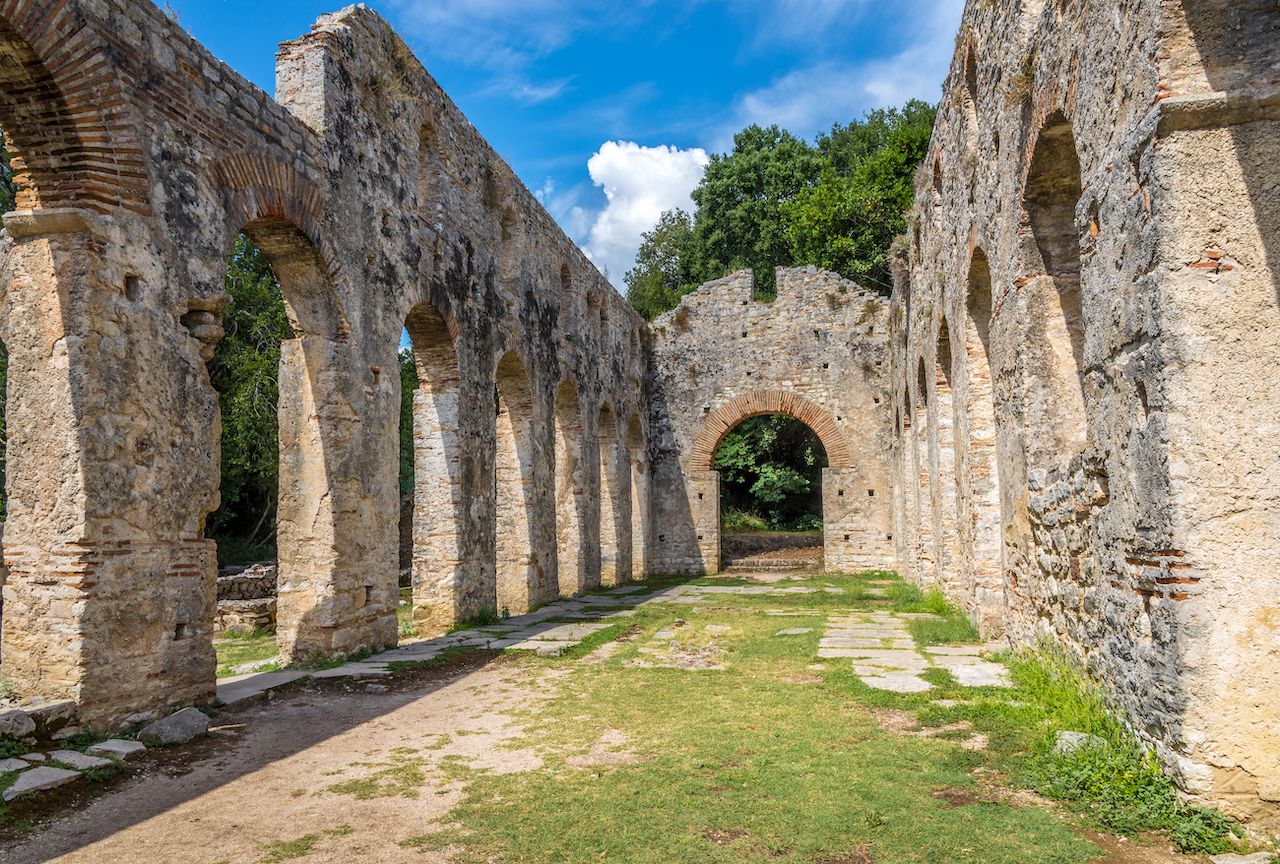 If you don’t get to have a look at the baptistery’s floor, know that there’s another impressive mosaic on the floor of the Christian basilica a little further uphill. And this one you can see freely. The basilica itself is beautiful, entirely made of stone, with a nave defined by two rows of arches. The basilica is the most imposing of the nine churches that have been found in Butrint so far. 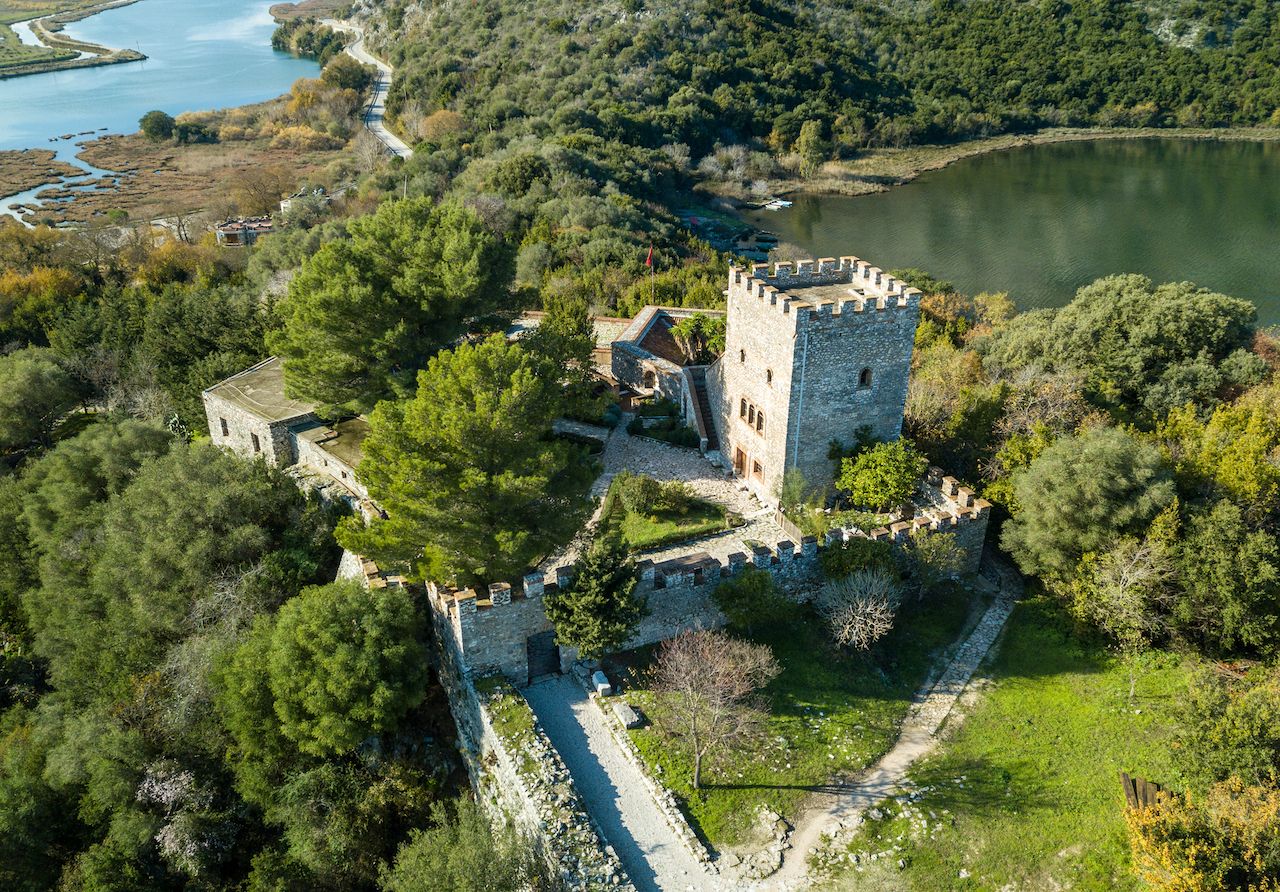 An uphill climb through heavily forested footpaths will bring you to the 14th-century Venetian Castle that houses the small but fascinating Butrint Museum. The highlights of the museum include statues of Roman gods and emperors found in the theater and elsewhere in the ancient city, as well as inscriptions recording the manumission, the freeing of the slaves in honor of Asclepius. Particularly interesting in those inscriptions is the role of women in ancient Butrint society, which was remarkably different from the rest of the classical world; they were not only allowed to decide upon the freeing of the slaves but also entitled to their dead husbands’ property instead of seeing it given to their eldest sons.

If you have more time: the rope ferry and Ali Pasha’s castle 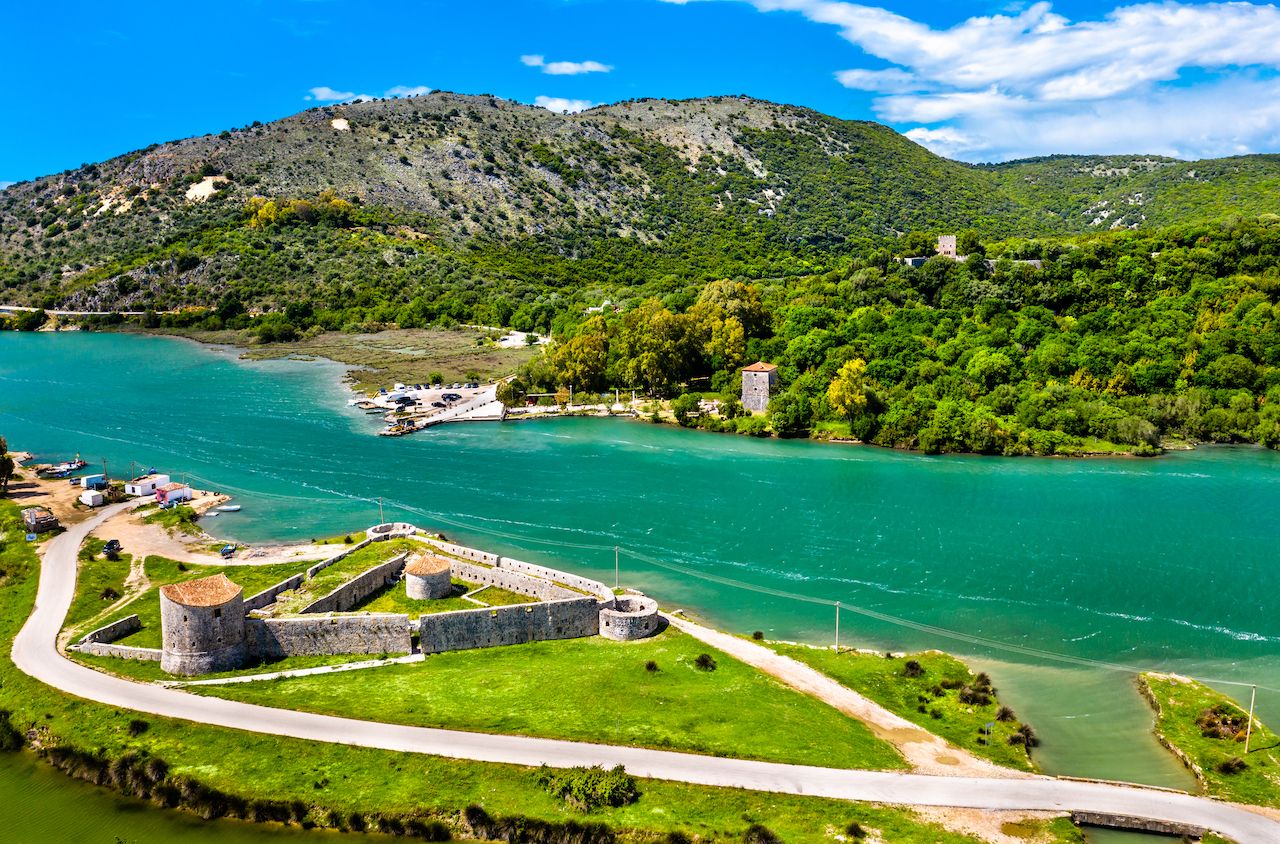 Near the entrance of the archaeological site, the rope ferry is a unique feature — a wooden platform carrying people and cars to the other side of the Vivari channel. A smaller Venetian castle lies there, as well as less-visited traces of a Roman suburb called the Vrina Plain.

Further to the west of the main archaeological site, on a small island at the mouth of the channel, is one of the many imposing castles that 18th-century Ottoman ruler Ali Pasha of Tepelenë built in the region. It’s possible to see the castle from the platform near a parking lot located less than one mile to the west of the entrance to the Butrint archeological site (not to be confused with the parking lot for the archaeological site). Don’t skip visiting the castle — it’s well worth it, and chances are you’ll have the whole place to yourself. From June to September you can arrange a boat ride from the parking lot to the castle with local fishermen for just a few lekë.

It’s easy to get to Butrint from the Greek island of Corfu. In just two hours by ferry or 50 minutes by hydrofoil you reach the city of Sarandë, from where buses take you to Butrint every hour and in less than 30 minutes. Sarandë can also be reached from Tirana by bus in just under five hours.

ArchaeologyArchaeological Digs Around the World You Can Actually Partake in This Year
Tagged
Archaeology Insider Guides Albania
What did you think of this story?
Meh
Good
Awesome

How To Spend a Mystifying Week in Albania