Cahuita is a small, unassuming town on Costa Rica’s Caribbean Coast. It may not be for everyone, but it’s perfect for those who choose wildlife over nightlife and prefer a basic cabana on an untamed stretch of sand to a luxury resort.

In Cahuita the jungle-backed beach is left as nature intended and is devoid of sun-lounging tourists. From tree frogs to sloths, wildlife is abundant – you never know what you might spot in the trees as you stroll along the dirt track which runs alongside the beach. “Downtown” holds just a couple of grocery stores and a scattering of Caribbean restaurants.

Cahuita is a laid back, unpretentious enclave with a strong Rasta influence and unique vibes. Not only does the town have a certain ramshackle charm, but it also happens to be located on the doorstep of a beautiful national park brimming with sloths, monkeys, and toucans. In fact, the entrance to Cahuita National Park is a mere stone’s throw from one of the supermarkets. The combination of a chilled-out Caribbean town and sublime national park is too much to resist for many travelers, who tend to linger far longer than intended. 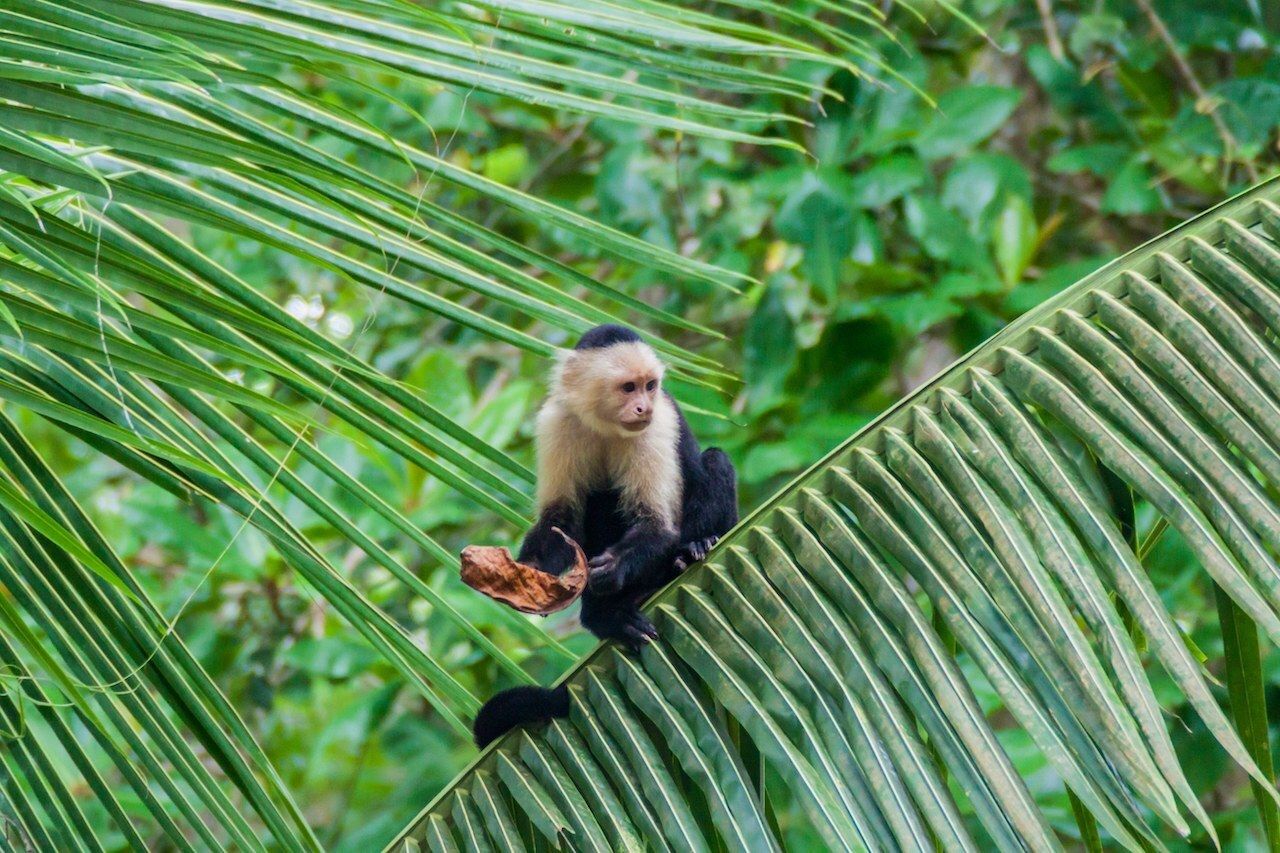 Covering 57,500 acres of land and sea, this national park includes 600 acres of living coral reef as well as beaches and jungle. A five-mile trail hugs the coastline with lush tropical rainforest on one side and views of the Caribbean Sea on the other. Gigantic electric blue morpho butterflies flit past, while monkeys watch on and coatis forage in the undergrowth. Slightly more elusive, but not impossible to spot, are the two- and three-toed sloths who hang around in the trees. When the jungle heat becomes too much, there are plenty of opportunities to hit the beach and indulge in a refreshing dip.

The protected barrier reef is home to an abundance of marine life, including hundreds of fish species and 35 species of crustaceans and live coral. Angelfish, barracudas, and stingrays are amongst the aquatic creatures to inhabit the reef. It is also a nesting area for sea turtles. Because the area is protected, snorkelers are not allowed to go alone; they have to take a tour. The best times to visit the reef are between March and May or August and October. Several companies arrange snorkeling tours, and some of them combine a hike through the park. 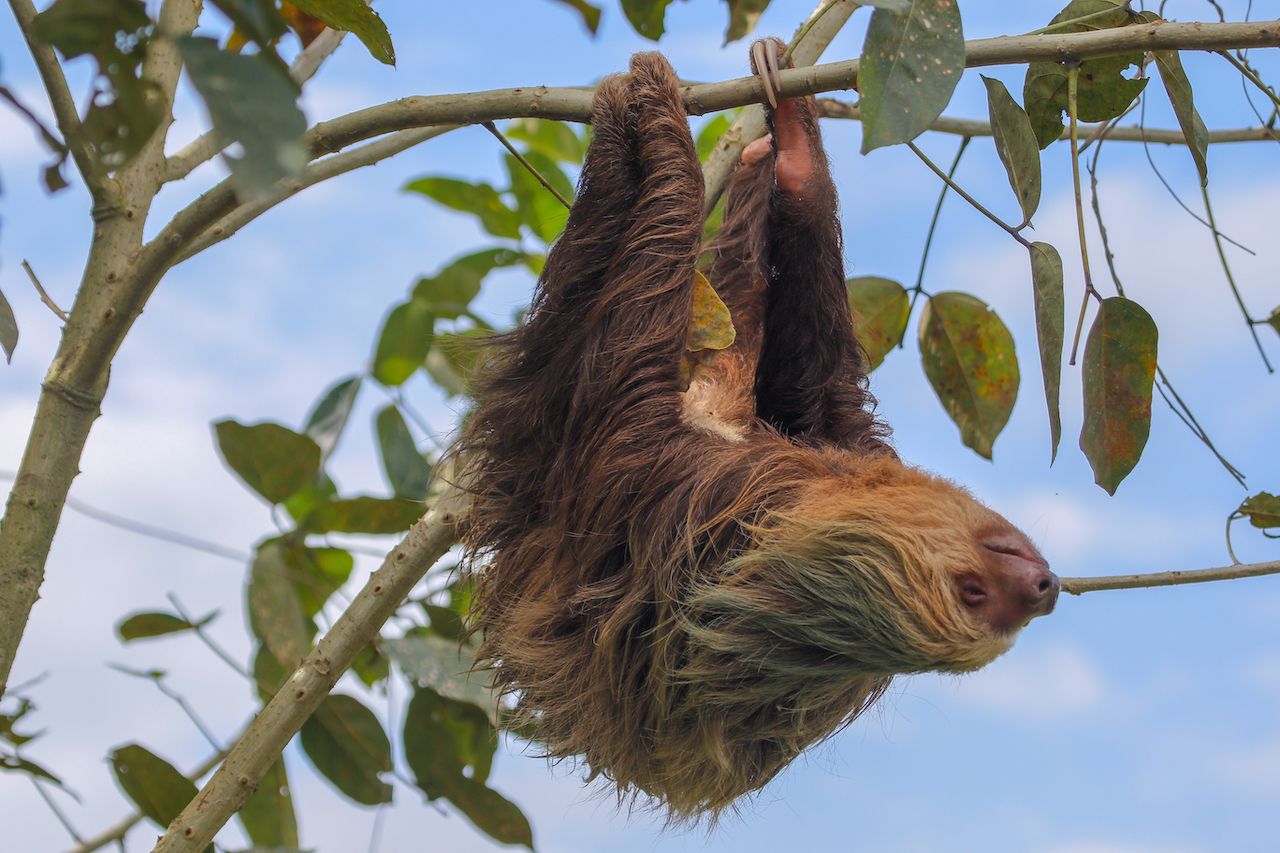 Fifteen minutes by car or taxi from Cahuita, this tiny, but very worthwhile, sloth sanctuary is nestled within the rainforest. The sanctuary rescues sick, injured, and abandoned sloths and rehabilitates and prepares them for release into the local forests. As well as meeting adult sloths and hearing their individual stories, the tour offers visitors the chance to view baby sloths in the nursery. A canoe trip is also included in the tour. The river winds its way through the rainforest, where you can spot crocodiles, monkeys, lizards, and the occasional sloth. 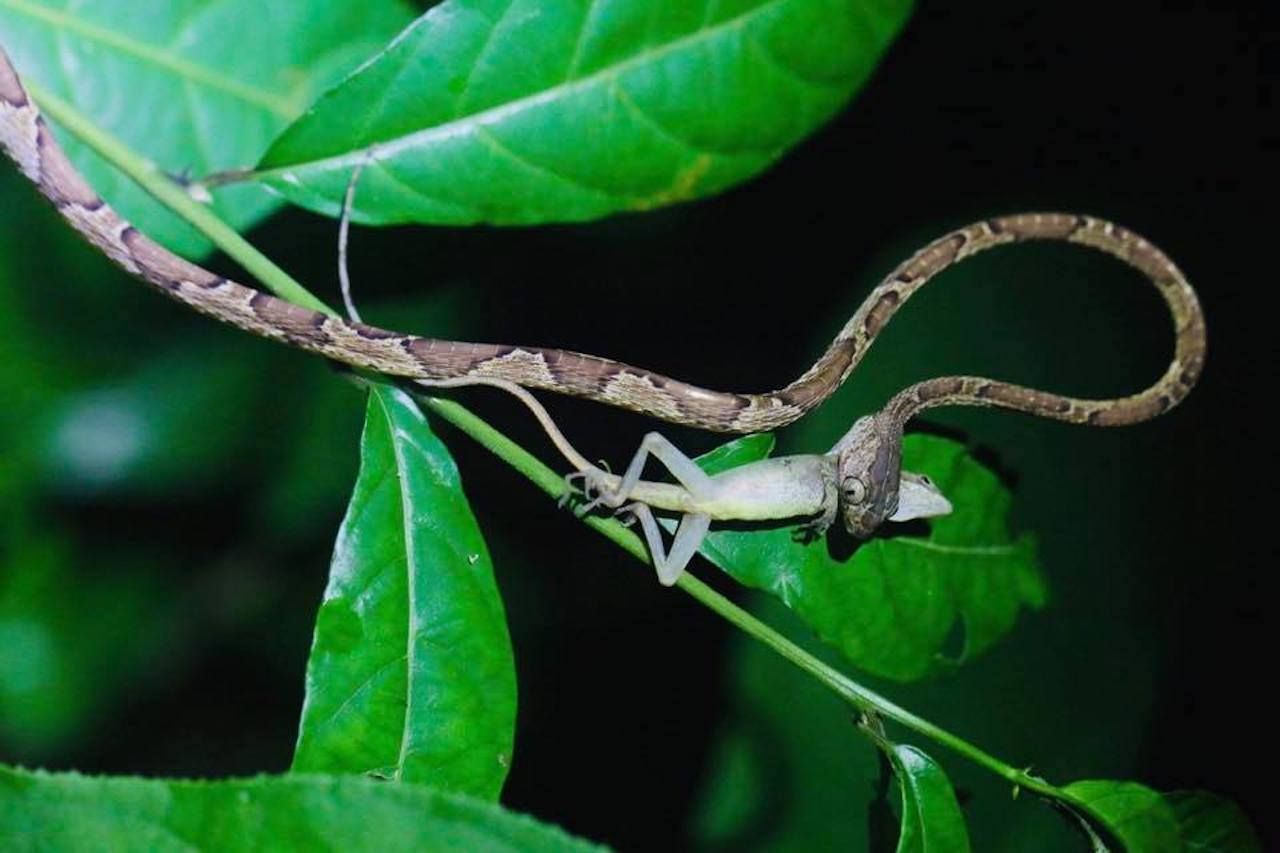 This burrow-filled path runs along land adjacent to the national park and is owned by naturalist Christian Eberle. He leads night tours along the route, where participants have the opportunity to spot snakes, frogs, bats, scorpions, and a wide variety of spiders. Additionally, raccoons, possums, lizards, and sloths frequently make an appearance. Although Christian is a laid-back guy, he is passionate and knowledgeable about wildlife and is an engaging and entertaining guide. He also speaks English, Spanish, and German fluently. 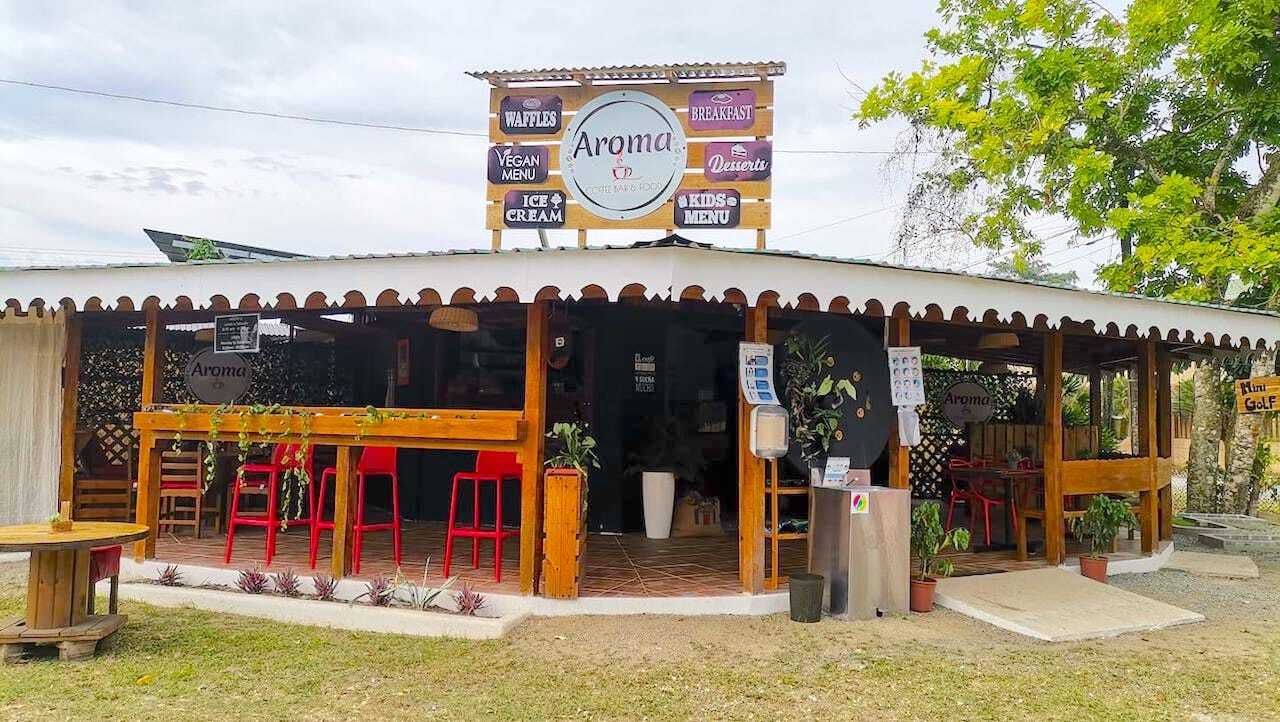 El Rincon del Amor is a friendly and hospitable restaurant specializing in freshly caught seafood with a Caribbean twist. The chef conjures up such temptations as garlic shrimp, Caribbean chicken, and red snapper. Portions are substantial and free shots of tequila are all part of the service.

As far as settings go, Sobre las Olas, situated just east of Playa Negra, is unbeatable. Watch the sun sink over the ocean while indulging in freshly caught grilled fish. There are plenty of vegan options too, and the menu is both Caribbean and Italian inspired. Tables and chairs are set on the beach amongst the palm trees.

If you are headed to the national park for the day, Aroma is the place to pick up sandwiches and other snacks for your excursion. It’s also a good breakfast spot, serving the best coffee in town and various offerings from pancakes to a full breakfast. Veggie options are available too, and you shouldn’t leave Cahuita without checking out the very special mango smoothies. 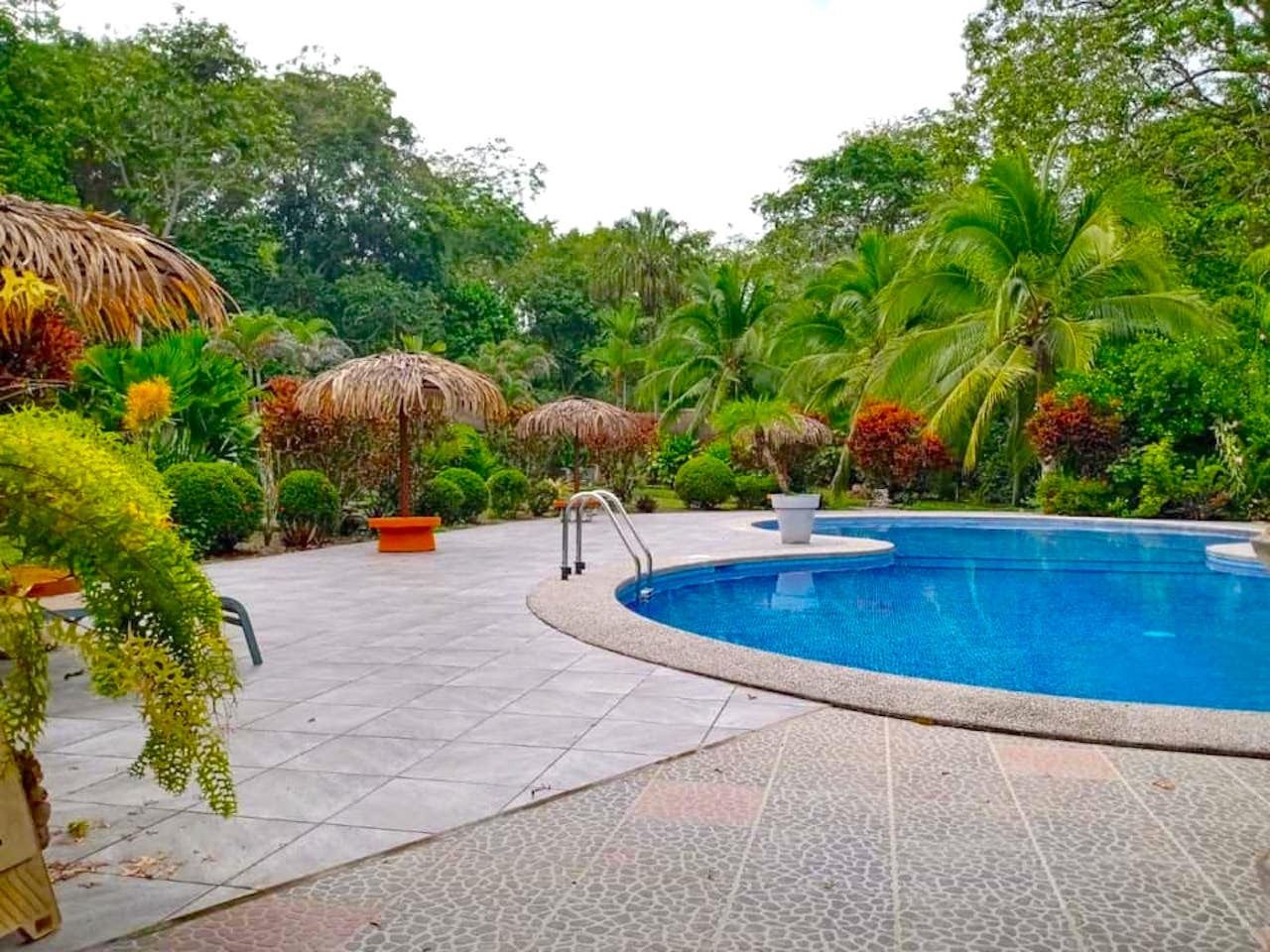 Cahuita seriously lacks in luxury hotels, and that is what makes it so appealing. Most of the hotels and guest houses are enhanced by the natural environment that they are situated in, and guests are as likely to spot monkeys in the lush surrounding gardens as in the national park.

Although the accommodation at La Piscina Natural is fairly basic, it is set right on the beach with its own natural pool and lovely gardens complete with the obligatory hammocks. It’s located a twenty-minute walk from town at Playa Negra, and the delightful owners, Patty and Walter, are welcoming and helpful. La Piscina Natural is an affordable slice of paradise by the Caribbean and a perfect budget option.

Mid-range Suizo Loco Lodge has bungalows grouped around a pool. There’s an onsite restaurant, and all rooms have their own terrace overlooking the gardens. The highlight of a stay here is drinking cocktails on a lounger while surrounded by toucans, hummingbirds, and howler monkeys.

A stay in Topo’s Treehouse is a unique experience. This double-decked treehouse, built into a giant coniferous tree, lies in the heart of the jungle, a short walk from the beach. Accommodating four people, it is beautifully crafted and comfortable. You can look out across the treetops and over a lily pond and spot local wildlife from the terrace.

How to get to Cahuita

Buses leave from Terminal Atlantico on Avenue 7/9, Calle 12 in the capital city of San Jose five times a day and take around 5-6 hours, depending on traffic and road conditions. More expensive shuttle buses are also available from San Jose Airport.