No matter where you head on Costa Rica’s Pacific Coast, there’s a beach that fits what you are looking for. You’ll find beaches with white sand and others with black lava-hued sand, tiny tree-lined coves and flat strands that stretch for miles, beaches with consistent waves that beckon the world’s best surfers and protected marine sanctuaries with water so calm you could snorkel all day. Whatever type of beach you seek, you’ll find it among these beaches in Costa Rica. 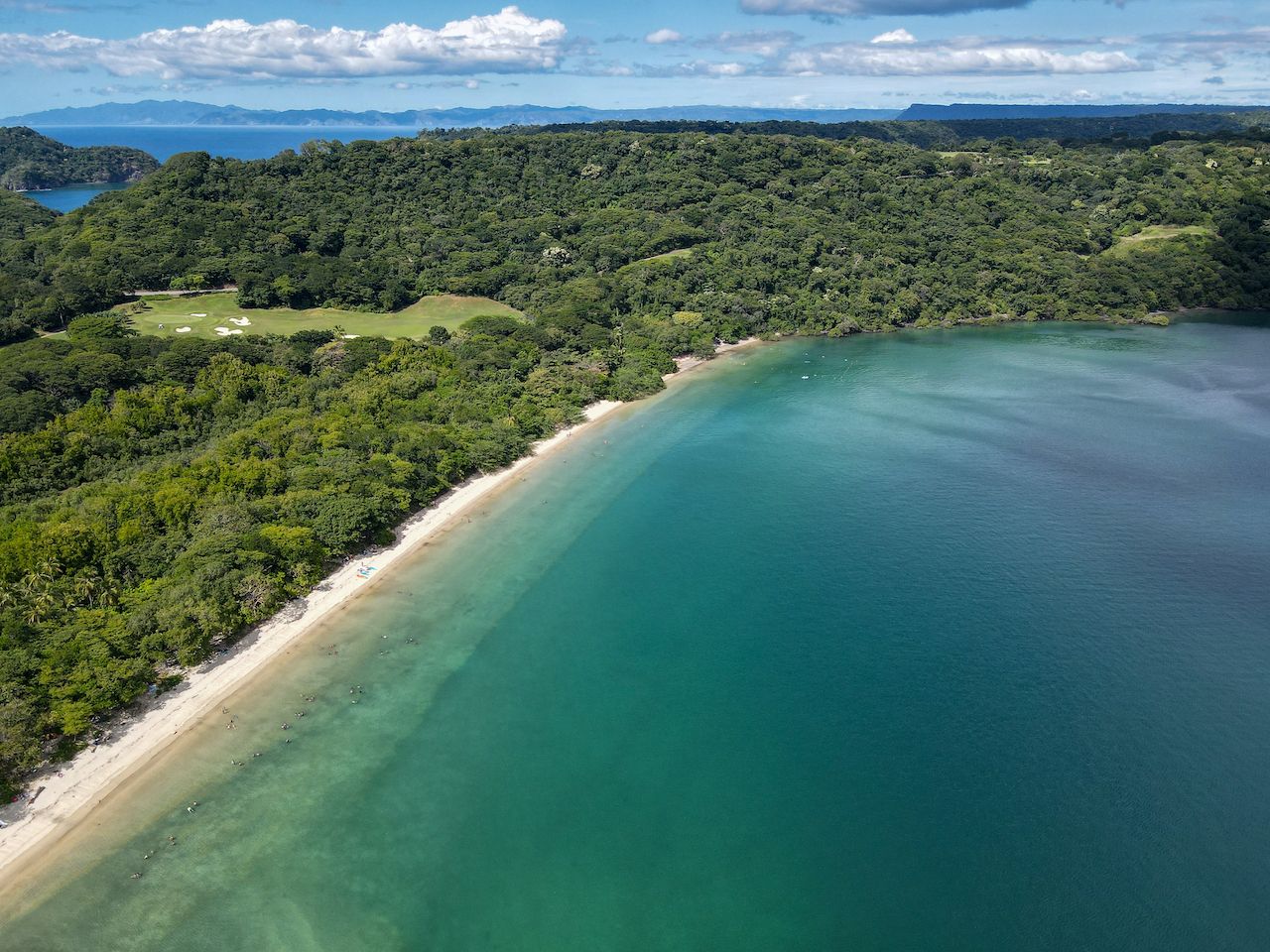 The posh Papagayo Peninsula lies at the northern end of Costa Rica’s Pacific coast, not far from the border with Nicaragua. This region is appealing for a number of reasons, one of which is its drier climate relative to farther south. Even during the wet season from May to September, the rains rarely lasts all day — meaning you have plenty of time to soak up the sun.

The Papagayo Peninsula has a reputation for its swanky resorts, but low-key accommodations are also available. And if people-watching poolside at the Four Seasons is not your thing, no problem. For one, you’ve got dozens of adventurous activities to choose from — from water sports to wildlife sanctuaries. And then there are the beaches, all of them public, as per Costa Rican law. But since most of the land on the peninsula is privately owned, beaches like Playa Manzanillo, Playa Blanca, and Playa Cabuyal are never crowded. Of the Papagayo beaches, though, our top choice is Playa Nacascolo, a serene, natural haven inside Culebra Bay that isn’t connected to any of the resorts. 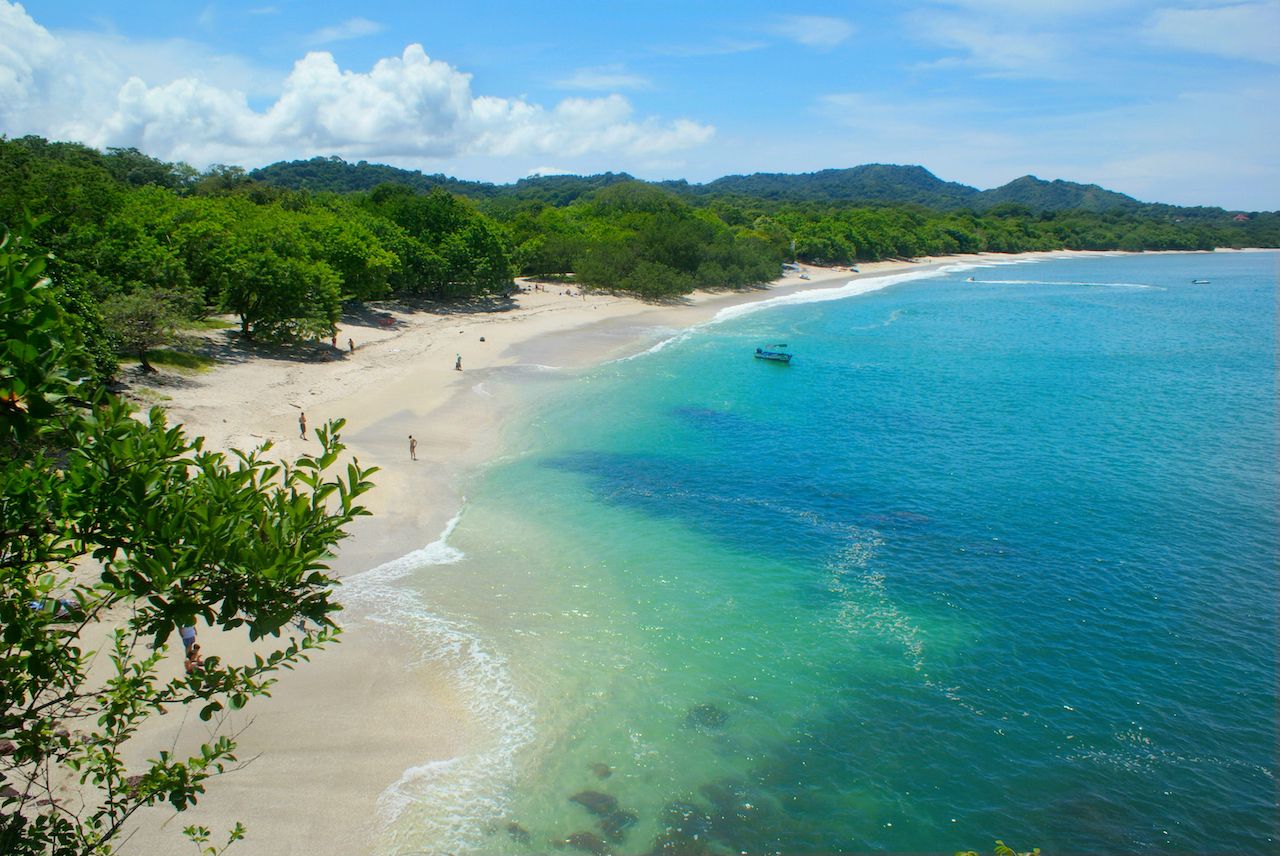 Tamarindo is a terrific place to surf, go horseback riding, even take an adventure tour on the river. But as one of the earliest beaches in Costa Rica to draw travelers, it let development get ahead of it and now you’ll spot US fast food chains on its main street. But it has everything you’d need and lots of accommodations, including one where howler monkeys literally walk on your veranda and iguanas stroll by the outdoor breakfast area — so it’s appealing and you might find yourself here.

If you do, take a boat across the river to Playa Grande, which is a lot less crowded than Tamarindo’s main beach. It’s a great place for an extremely long walk and is a turtle nesting ground, so treat it with care. But our top beach pick in this area is Playa Conchal, a 45-minute drive from Tamarindo over a coastal headland in a secluded bay. The name literally means beach of shells, since its sand is made of tiny crushed seashells. The Westin Resort is here now, but it’s still marvelously empty nearly all the time. 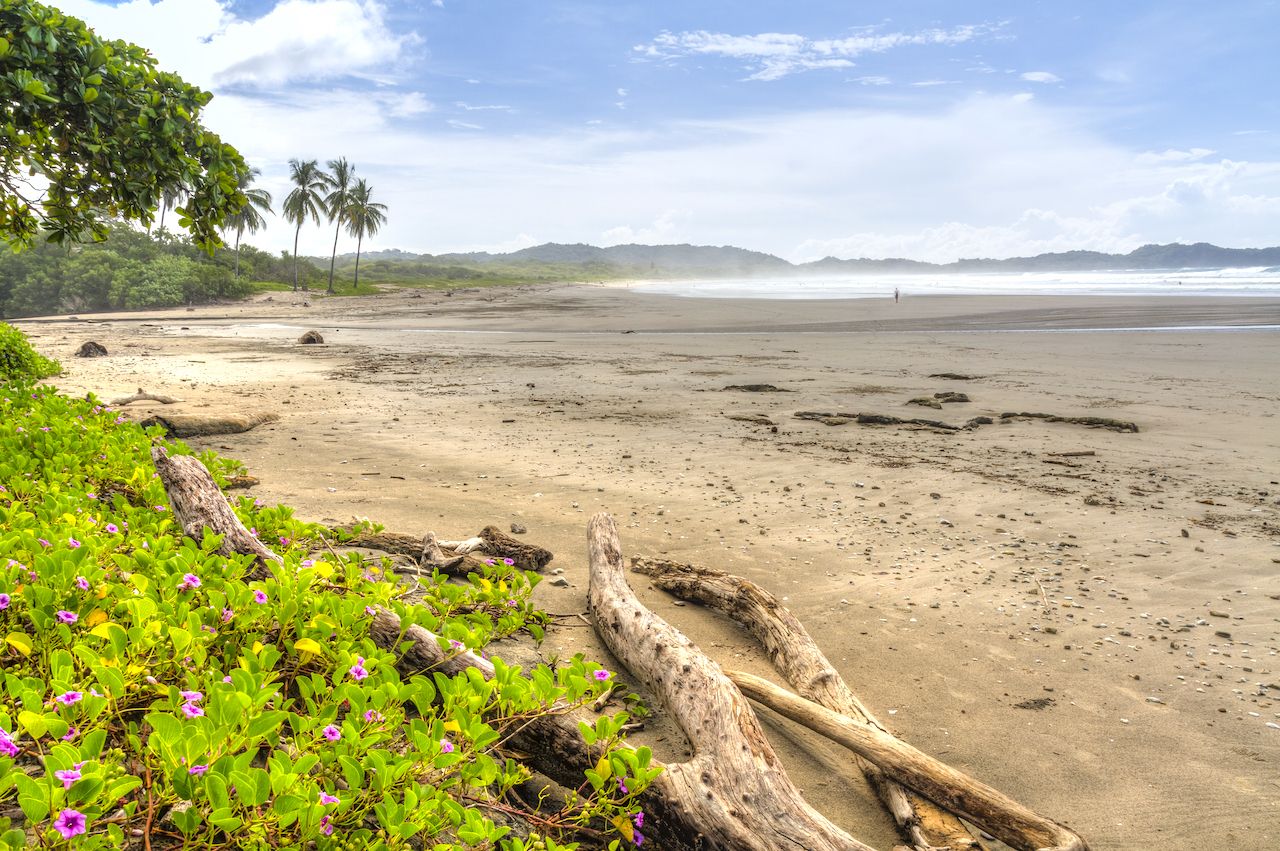 You are still in Guanacaste Province here, the country’s northwesternmost province. While Nosara is actually the name of a town that is further inland, when travelers from North America talk about Nosara, they are referring to a charming beach town located on Guiones Beach, a three-mile long stretch that draws surfers from around the world. It’s even home to an impressive women’s surf community. The lengthy beach is perfect for an afternoon walk, say all the way perhaps to the next beach over, Playa Pelada.

Like many beaches in Costa Rica, development is prohibited at the shoreline itself and no building can be higher than the treeline here. The purpose is to protect nesting sea turtles, who use the moon for navigation and who would be disoriented without that lunar sightline. (If you really want to check out the turtles, go at the right time of year just due north of Guiones to Playa Ostional.) So if you’re out on your surfboard in the water, you look back and see nothing but green, with the coastal hill behind them. The great thing is that with the town known as Nosara hiding the greenery, you can end a beach day with a fresh fruit smoothie or a cocktail at one of several outdoor bars. 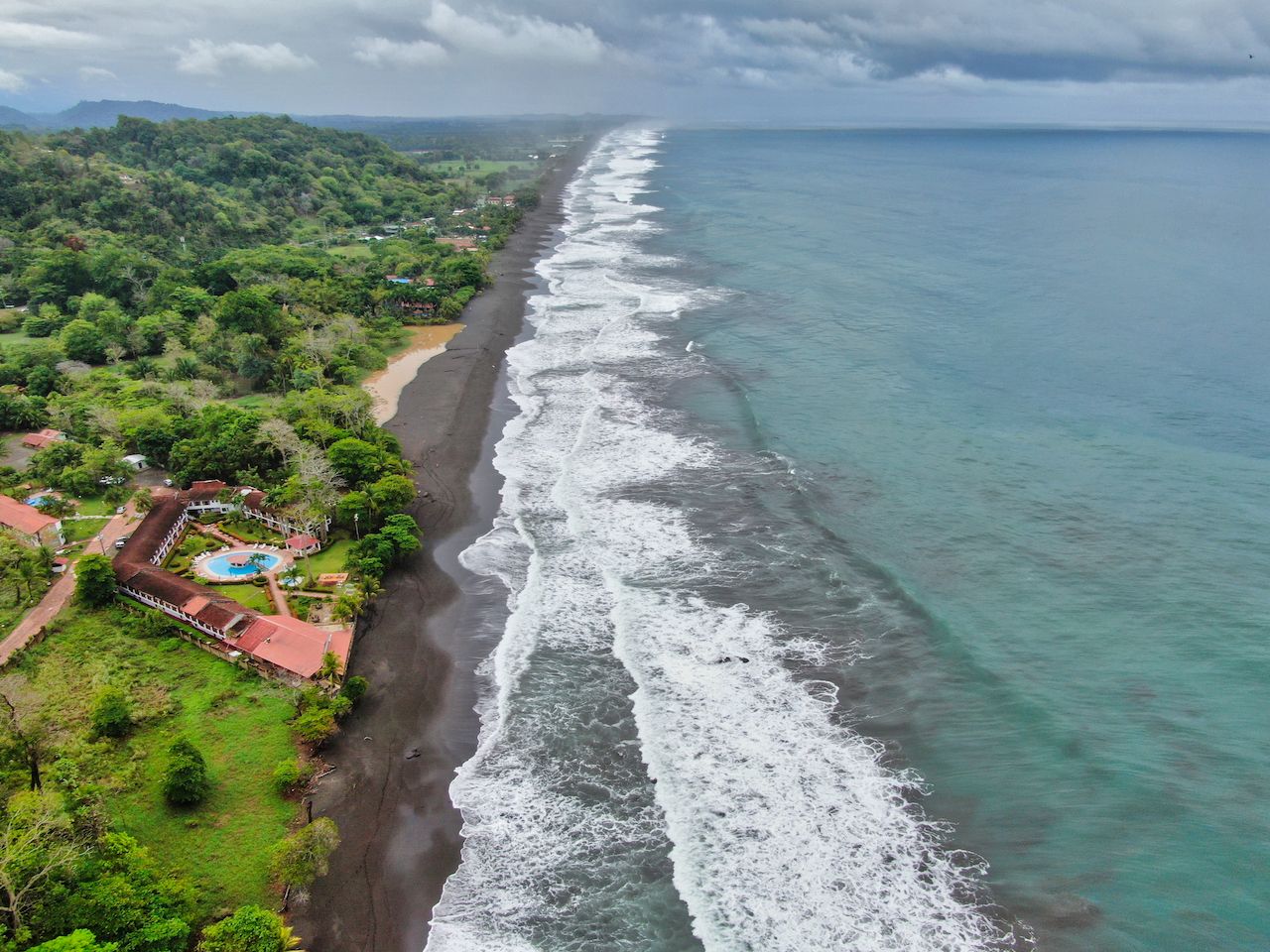 Among the beaches in Costa Rica, we had to include at least one with black sand, seeing as the country is literally bisected by volcanoes, many of them still active. Playa Hermosa is a big draw on the Pacific coast because, as suggested by its name “beautiful beach” in Spanish, it is really quite lovely. It is also the most recent World Surf Reserve, a designation awarded to beaches for their efforts to preserve the natural and marine environment and protect its waves from ruinous coastal development. In fact, the volcanic rock sand at Playa Hermosa is actually more like a dark grey, but the color is distinctive. That said, if you’re in the Jaco area and really just want to dip your toes into pale sand, drive 30 minutes north of Jaco to Punta Leones and you’ll find Playa Blanca. It’s a beautiful tree-lined cove, and if you know your Spanish, then you know the sand is white. 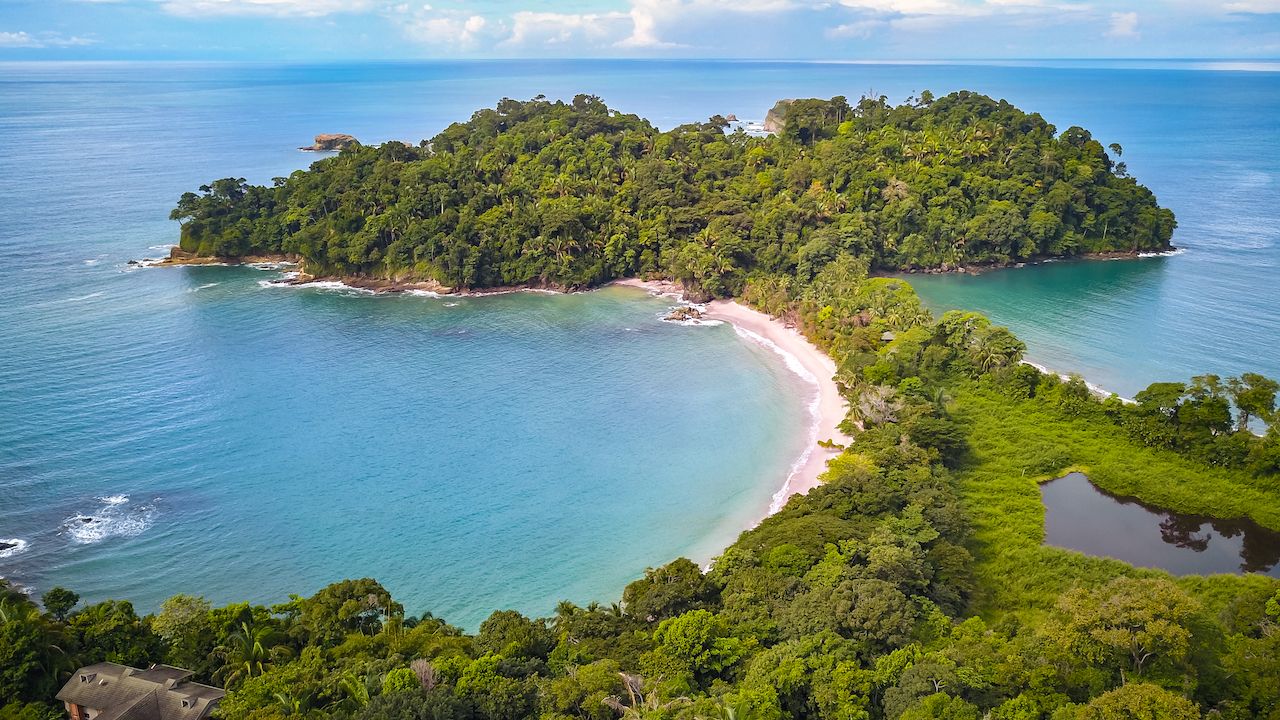 Just as it’s hard to choose from among Costa Rica’s many indulgent beaches, it’s also chock-full of national parks. In fact, 25 percent of the country is protected land. Manuel Antonio certainly ranks as one of the top national parks in the country, not just for its 100 mammal species, including four types of monkeys, but also because of its coastal location. Within Manuel Antonio National Park are four beaches you can reach on its trails: the petite little Playitas; Playa Escondido; Espadilla Sur, located on one side of a mini-peninsula that ends at the mushroom-cap-shaped Cathedral Point; and the eponymous Manuel Antonio Beach on the other side of the said peninsula (the mushroom stem, if you will).

All of the beaches are a wonder, but we’ve gone with the park’s namesake beach here because it’s one of the best spots for spotting marine life while you are enjoying a leisurely afternoon in the sun. Playa Manuel Antonio is in a small protected bay, making for warm, calm water and excellent snorkeling. 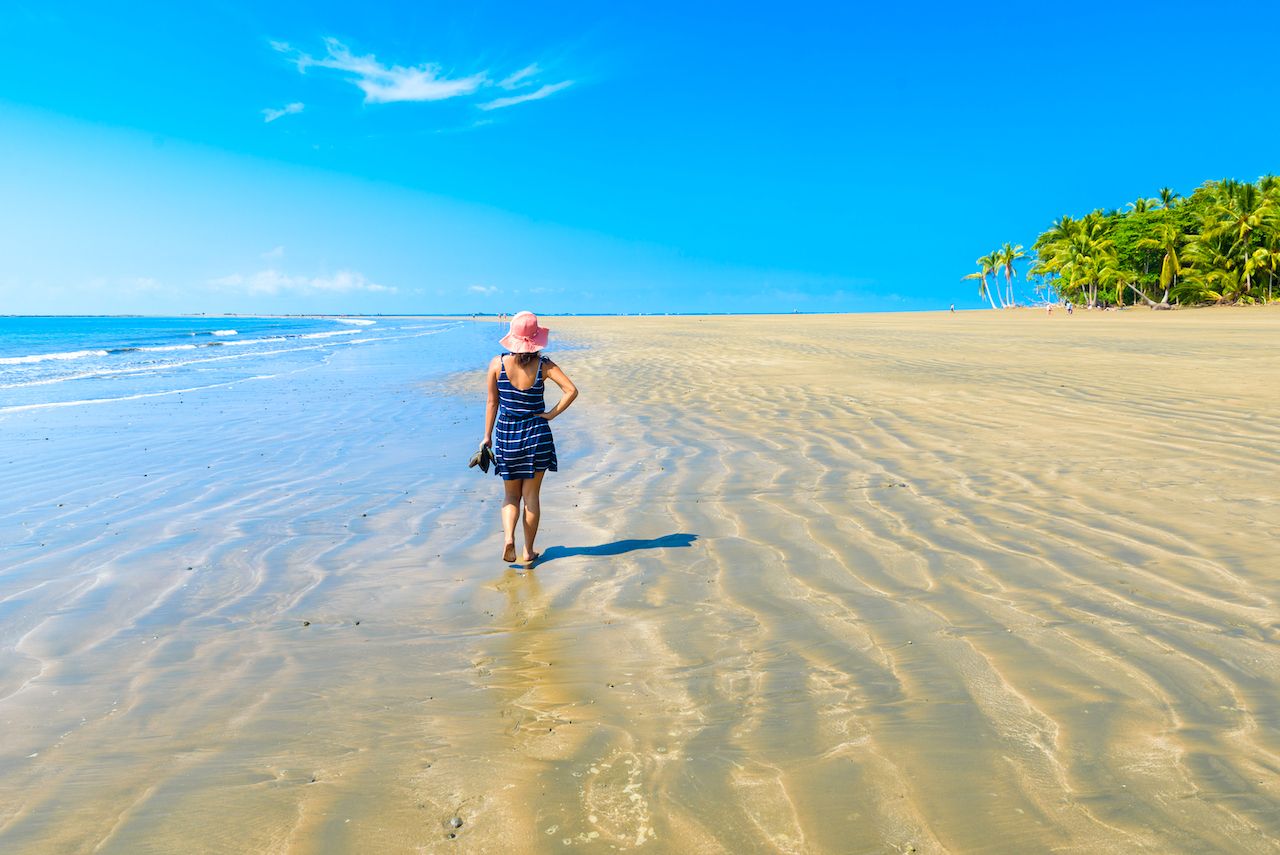 No list of the best beaches in Costa Rica would be complete without at least one mention in this national park, which encompasses nine miles of coastline and 13,000 acres of ocean. You should absolutely bring your snorkeling gear to explore Central America’s largest coral reef. While Playa Arco has a waterfall, we’re giving this one to Playa Uvita. Its broad shore is perfect for a long walk while you catch humpback whales breaching offshore. Make sure you are here at sunset. Since the beach is so flat and the shallow water stretches over the sand, the sand lights up in the same blaze of colors as the sea itself and as the sky it’s reflecting. 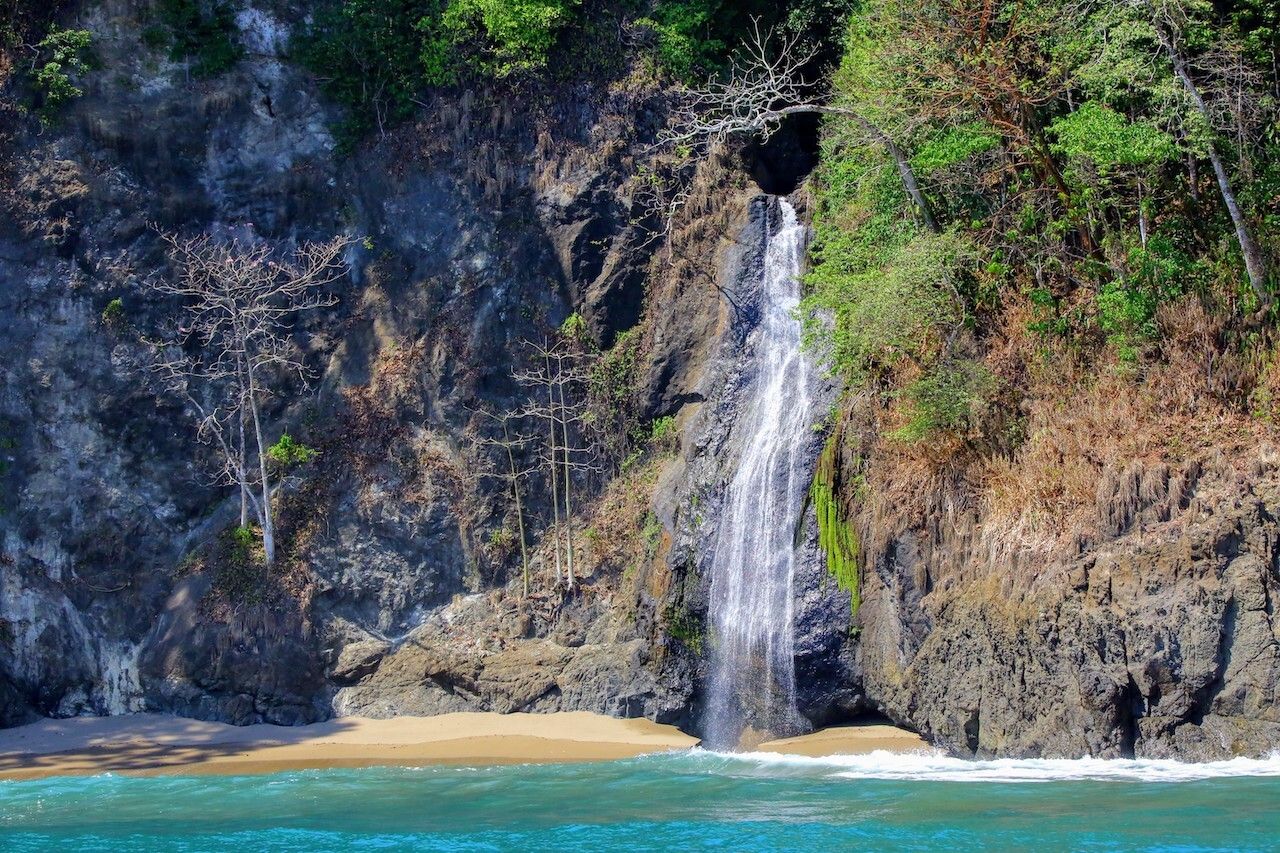 The Osa Peninsula is widely considered one of the most biologically diverse places on Earth. It’s really one of the top places to explore in a country full of top places, and Drakes Bay has one of our favorite resorts in Costa Rica. Therein, Corcovado National Park is another location that unites two of the things that make this Central American country so special: its natural treasures and its coastal beauty.

After you’ve visited one of the world’s oldest forests within the national park, head down to the beach. While you could do no wrong hanging out at Playa Sirena or the park’s namesake Playa Corcovado, take a trek over to Playa Llorona, preferably at low tide, since it’s a tiny beach. Playa Llorona means “crying beach” or “crybaby beach.” It’s so named for the lovely waterfall that cascades down to its soft sand.

Outdoor9 Reasons Costa Rica Is the Ultimate Adventure Destination — Beyond Surfing
Tagged
Beaches and Islands Costa Rica
What did you think of this story?
Meh
Good
Awesome