There’s no sensation like riding a wave, even if you’re only on your feet for a split second before wiping out. Even then, it’s usually a soft landing.

For a native Coloradan with three decades of snowboarding under her belt, learning to surf has been a lifelong goal. It turns out that riding unfrozen water is a whole different animal and admittedly, much more difficult than shredding the slopes. Still, there’s no better place to learn than southern California, especially in towns like Huntington Beach and Oceanside, where surf culture presides, seeping from every street corner. 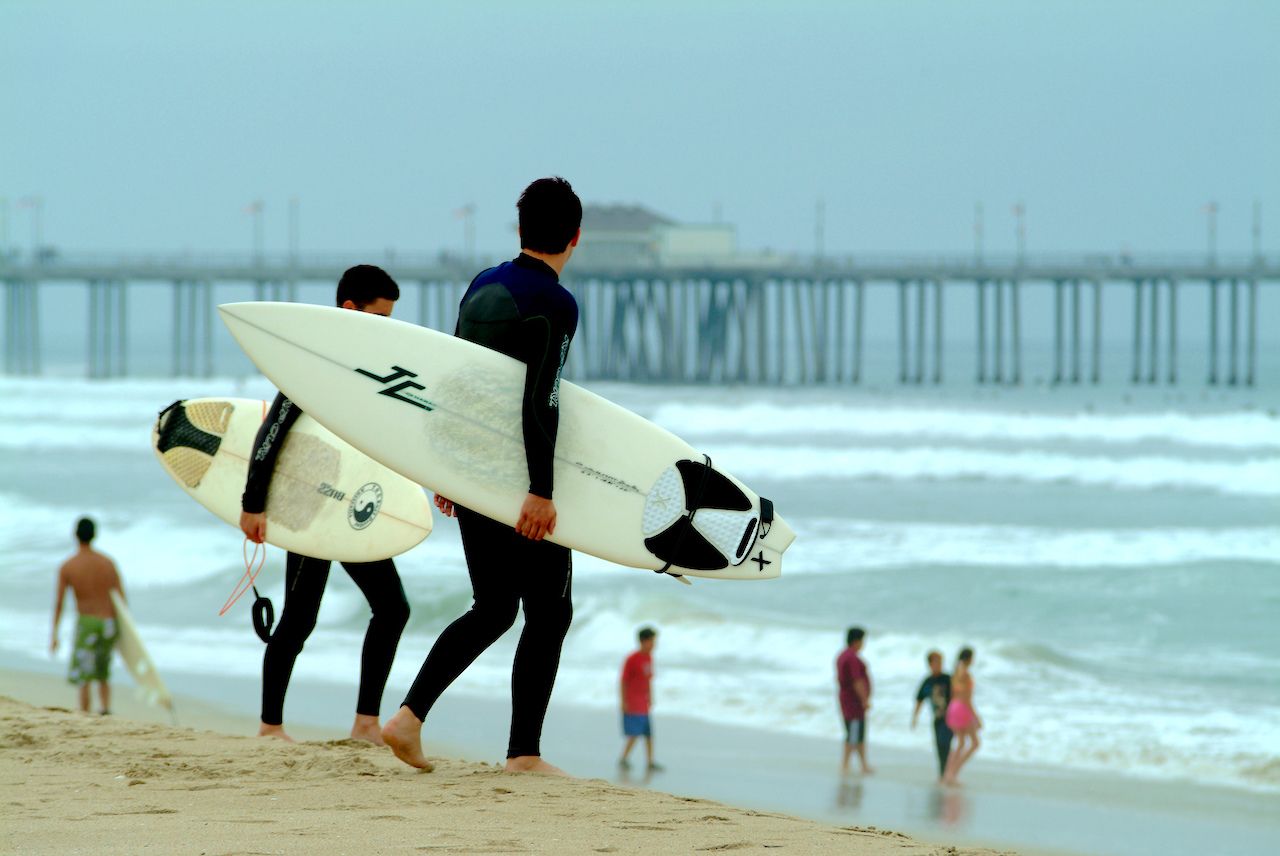 After years of legal sparring with the Northern California coastal city of Santa Cruz, Huntington Beach “won” the right to call itself “Surf City USA.” The reality is that Waikiki is more deserving of the name, seeing as Hawaii is the birthplace of surfing — a fact that earns surfers from that state the right to compete internationally under their own flag.

But the Hawaiian who brought surfing to the wider world in modern times, Olympic swimming gold medalist Duke Kahanamoku, did in fact surf frequently by the Huntington Beach Pier as early as 1925. Since then, the area has hosted the world’s top surfers in the U.S. Open of Surfing (and previous iterations of the competition) for more than 60 years. So if you’re anywhere near California, Huntington Beach is, fittingly, a good place to base yourself. 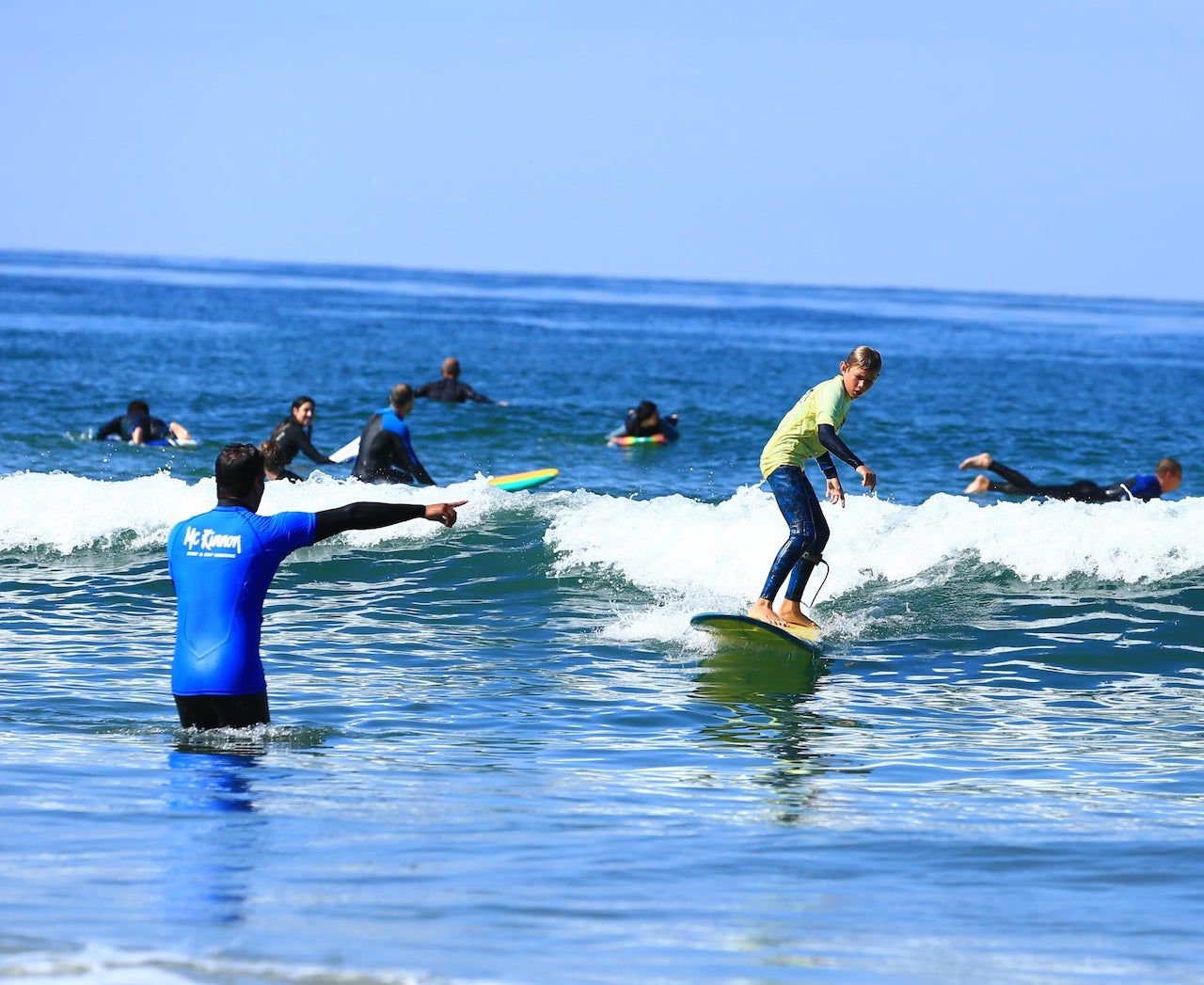 Pro surfer Rocky McKinnon begins his private surf lessons with a simple overview of oceanography, drawing in the sand to illustrate the forces behind waves. First, you need to succeed in what McKinnon refers to as “the toughest aspect” of the sport: squeezing into a wetsuit. The tight-fitting neoprene is much needed most of the year, although the Pacific can stay quite warm through October on this part of the coast. Then, while still on the sand, you lie on your belly to simulate paddling and jumping to your feet. Then McKinnon accompanies you into the water, coaching every step of the way as you navigate the breakers. He steadies the board as you crawl on and shouts instructions while releasing the board into a wave as you scramble — but hopefully one day leap gracefully — to your feet.

The whole experience is reminiscent of your dad teaching you how to ride a bike without training wheels. McKinnon is famous for guiding first-timers onto their feet – sometimes on their very first wave – and also for his one-of-a-kind adaptive surf and paddle programs. The dude also knows every single local getting out of the water, from the competitive surfers dialing their next big trick to the guy who launched surfboard fin manufacturer Futures.

In fall and winter, when surf swell is larger, you likely won’t be riding your first waves near the Huntington Beach Pier, as that is a more advanced wave. Bolsa Chica, just north of Huntingon Beach proper, is the place to find gentle rollers suitable for novice wave riders.

Where to stay in Huntington Beach 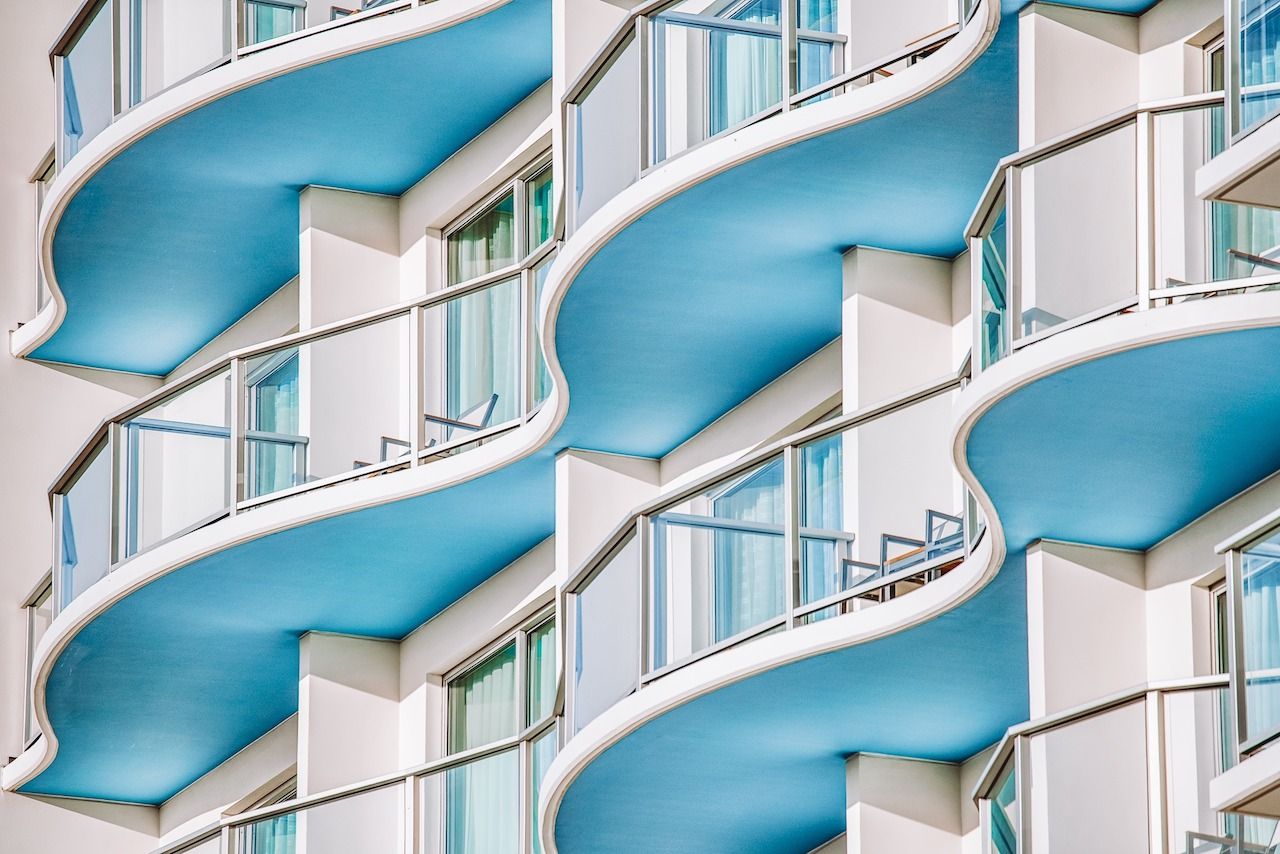 Paséa Hotel comes with sweeping views of the coastline and direct beach access to Huntington. There’s also free beach towel, beach chair, and cruiser bike rentals, the latter an ideal means for exploring the 10 miles of paved beach trail that runs to Newport to the south and Sunset to the north or accessing the donation-based Yoga on the Beach classes that take place at Lifeguard Tower 14. Also, Pasea’s spa offers a specialized surf treatment, which hits the spot after a day of tumbling in the breakers. The hotel’s oceanfront restaurant, Tanner’s, serves what is arguably the most succulent Hamachi Crudo you’ll find anywhere. Rooms start at about $350 per night in the off-season.

The Kimpton Shorebreak Hotel is another option on the sand, with prices just below those of Pasea. For a budget option a short walk from the beach, the SpringHill Suites Huntington Beach come in at under $200 a night in the lower season; and the included kitchens keep costs down.

Where to eat in Huntington Beach 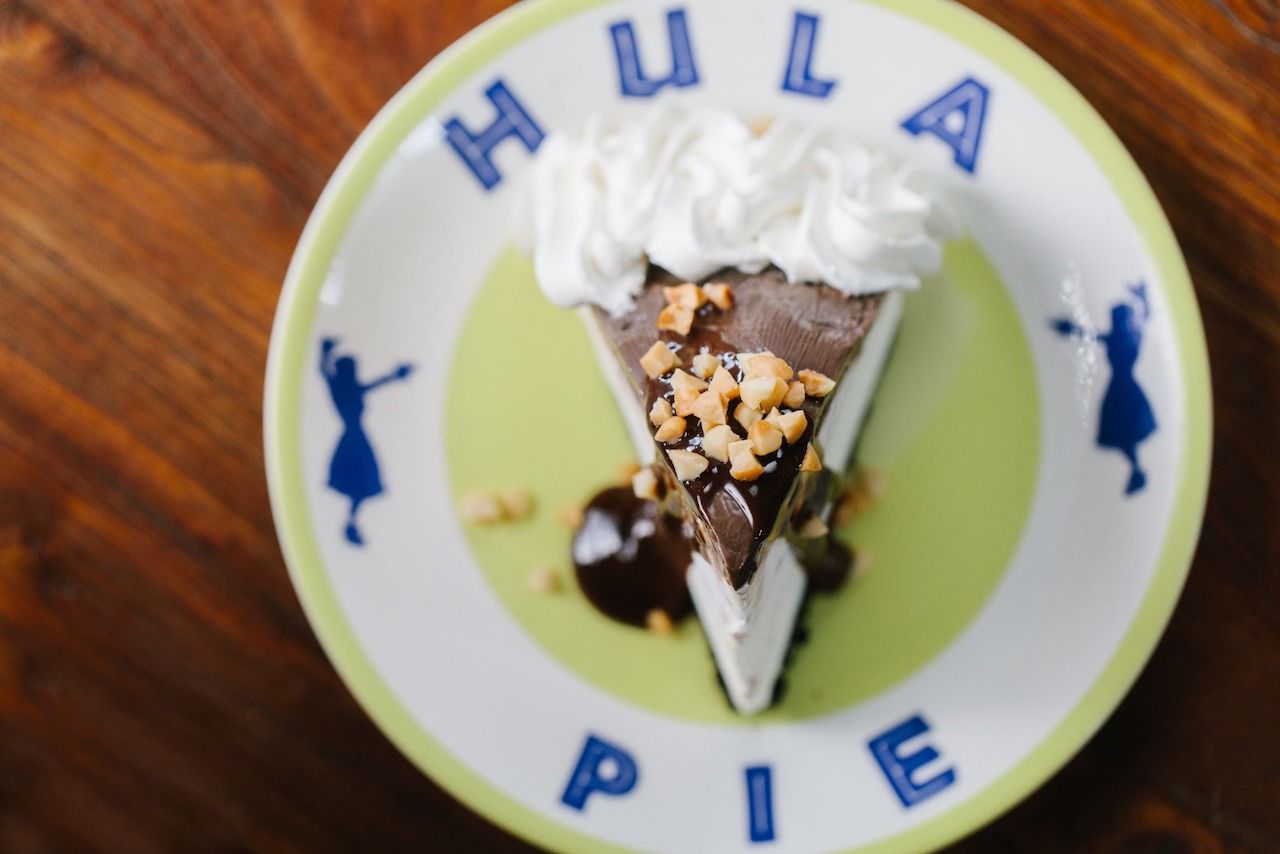 Iconic dining haunts include Duke’s on the pier, named after Duke Kahanamoku. It feels kind of like a surf-themed Applebee’s, but much tastier, especially its mountainous macadamia nut ice cream dessert (Kimo’s Hula Pie), for which some regulars visit exclusively. Run by local surfers Tim and Michele Turner, the Sugar Shack has been a buzzing, family-operated breakfast joint since 1967. Then there’s the margaritas and ocean views at Ola Mexican Kitchen, among a handful of worthwhile newer haunts that also includes Simmzy’s with its long list of local brews and creative fish tacos ideal for a beach picnic, and Sessions West Coast Deli, where even the “skinny” breakfast burrito is the size of your forearm. 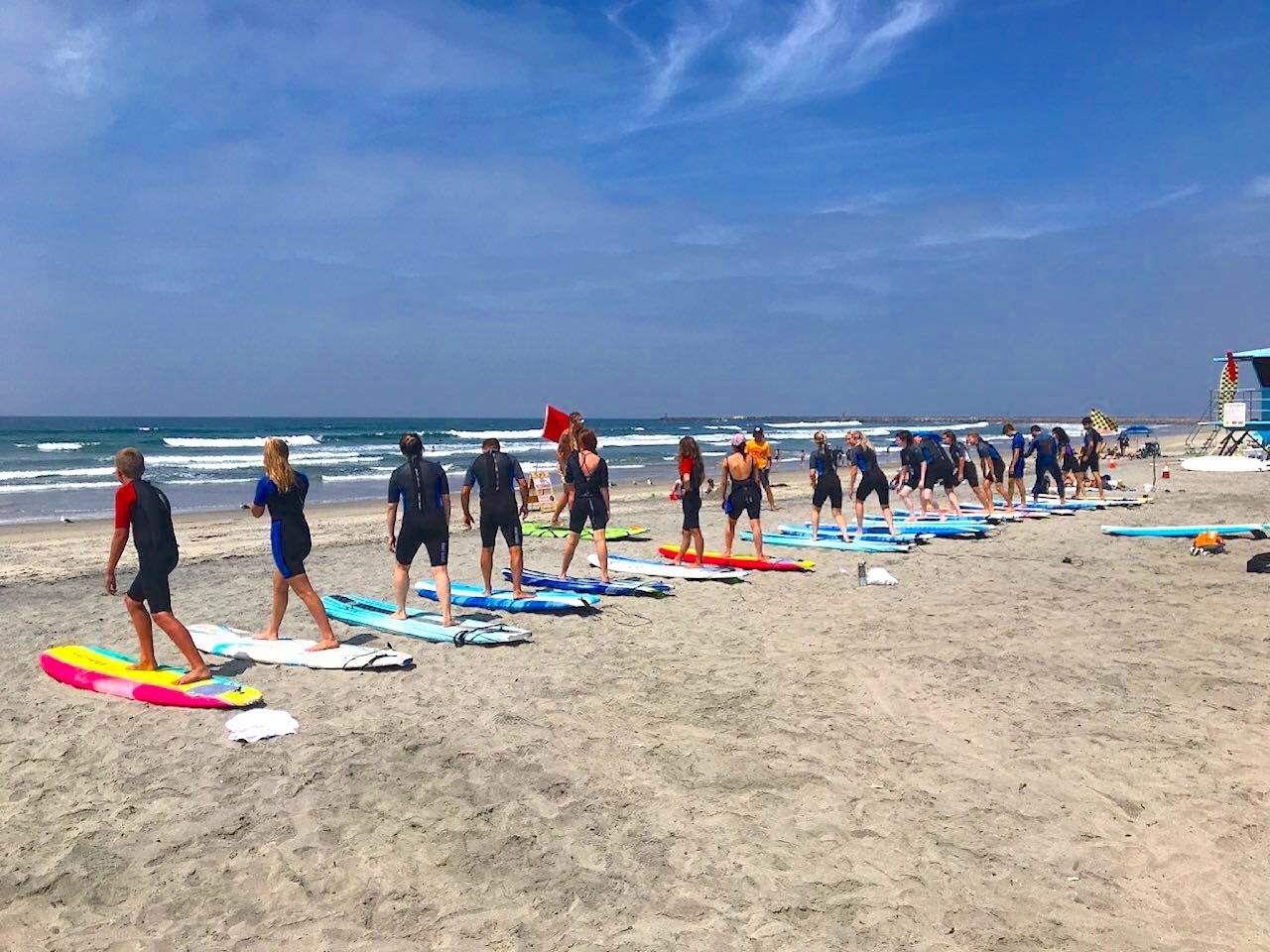 Farther south on SoCal’s coast sits Oceanside, another iconic surf town that has made a global splash through competitions like the Super Girl Surf Pro, the world’s largest all-female surf competition that launched in 2007 and has seen exponential growth. Oceanside itself has seriously classed itself up in the last couple of years. Not only has it cleaned up its streets and storefronts, adding artwork and walkways as well as a rash of hip restaurants and breweries; it has officially become a destination spot for surfers from far and wide and bolstered its options for beginners to learn the waves.

Partnering with North County Surf Academy, The Seabird hotel offers surf lessons guided by none other than pro surfer Duran Barr, a third-generation Oceanside resident with a knack for not just riding but reading the local waves and imparting his wisdom. Opened in 1963 and run by a friendly and passionate family of surfers, The Whitlock Surf Shop offers ample opportunities for beginners to dive in via private and group lessons as well as surf camps.

Where to stay in Oceanside 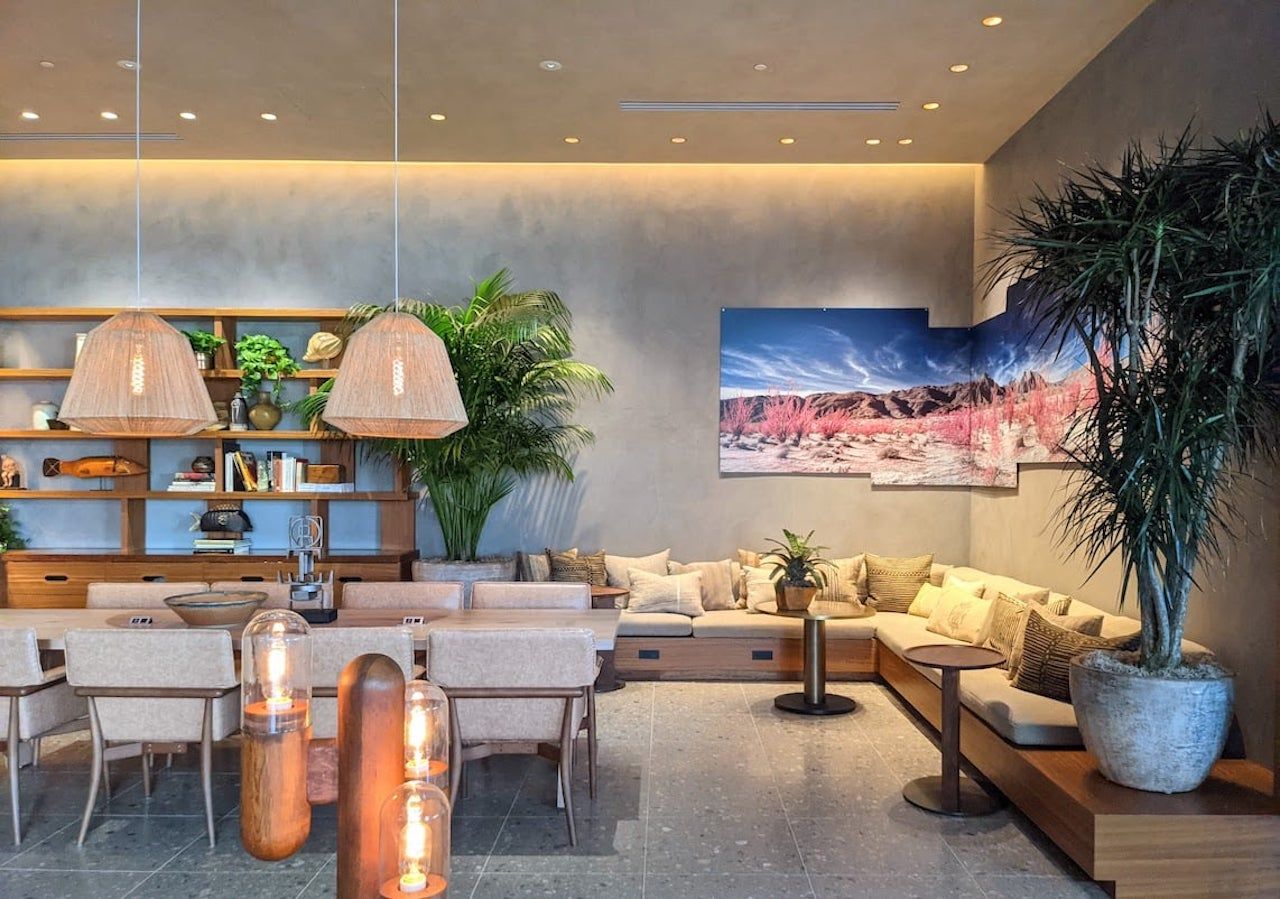 One major centerpiece of the town’s renaissance is The Seabird. Situated on the beachfront just south of the pier, the 226-room resort offers front row views of surfers catching waves, a rooftop pool and unique local touches throughout its property, including a hallway adorned with chandeliers made from recycled T-shirts and an adjoining gallery showcasing rotating displays from other local artists. Along with sister property across the street, Mission Pacific, The Seabird is also home to some of the tastiest eats north of San Diego — particularly the crab roll at the poolside Shelter Club or the tacos at Mission Pacific’s Rooftop Bar.

Outside of summer months, you’ll find rates of about $230 for standard rooms for both hotels through online sites like Booking.com or Expedia. For a more intimate and economical option, The Hotel Oceanside has rooms for as little as $99 weeknights after Labor Day.

Where to eat and drink in Oceanside 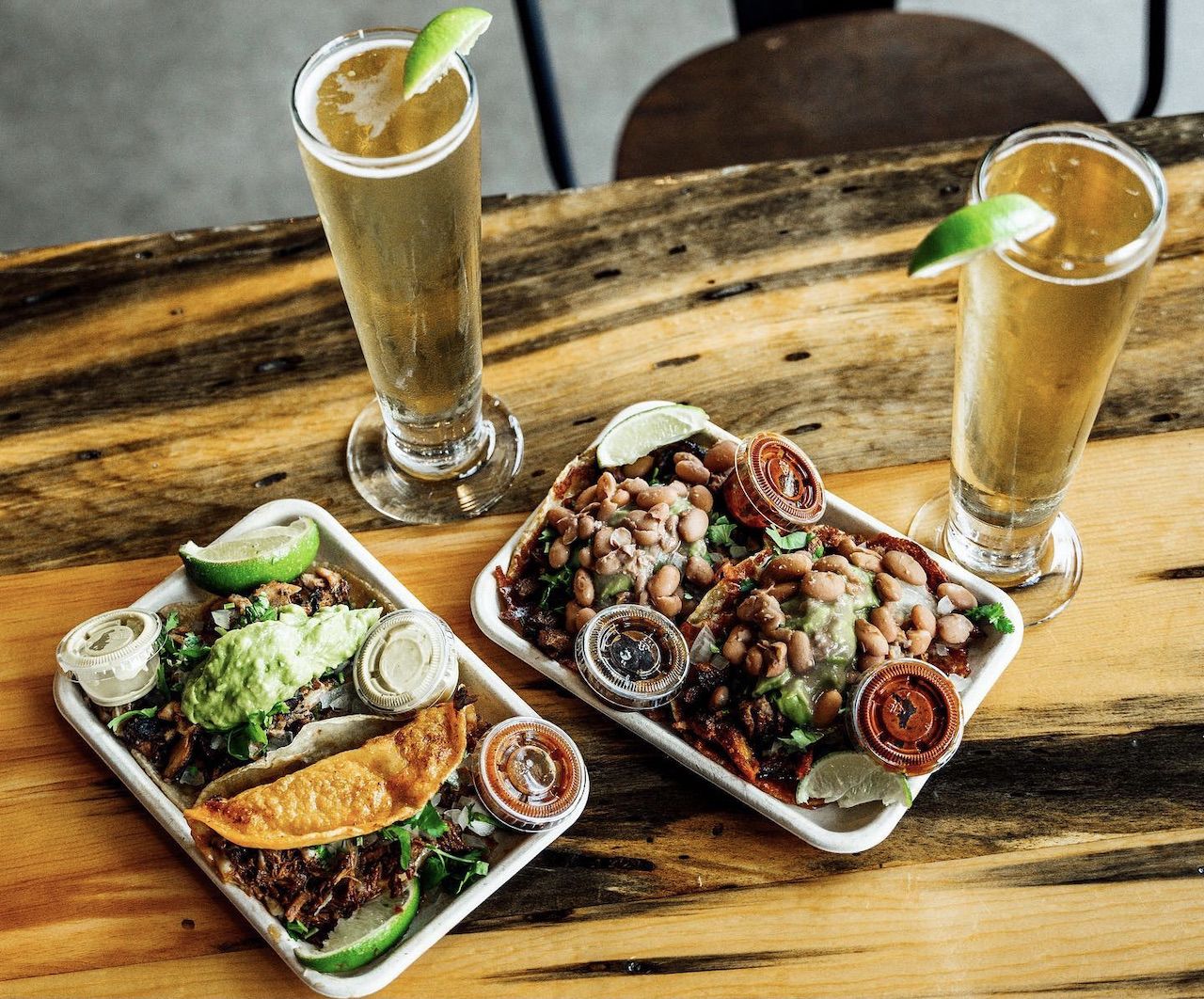 Oceanside’s most popular nosh corners err on the casual side, like the always-popping Craft Coast Brewery and Taco Stand and brunch haunt, The Local Taphouse, where you must try the calamari strips. Also, donuts. You cannot spend a morning here without indulging in at least one cronut-style treat at Parlor Doughnuts. A few miles down the road, Carlsbad sports a beach town character all its own, leaning more on the polished end of the spectrum. The place is definitely worth a trip for suds fans. Pure Project is home to some of the most flavorful and creative brews in The West. Its smoothie sours taste just like smoothies and make for excellent beach picnic sipping.

No visit to Oceanside is complete without a stop in the California Surf Museum. Run since 1986 by a team of knowledgeable locals, the museum features a fascinating collection of surfboards, highlighting their evolution over the last several decades as well as monster wave photography. Perhaps the most fascinating exhibit centers on Bethany Hamilton, a pro surfer who lost her arm to a shark in 2003 and whose actual surfboard, complete with perfectly formed shark bite out of one side, is right there to make you shudder.

Don’t let it scare you during your own burgeoning surf adventures, though. Chances for shark attacks while surfing are about one in 11.5 million. You’re probably more likely to get charged by a moose on the slopes.

Epic Stays9 Dreamy Oceanfront Airbnbs Up and Down the California Coast
Tagged
Beaches and Islands Surfing California, United States
What did you think of this story?
Meh
Good
Awesome