The weather is still plenty warm, and the outdoors are calling. If you’re ready for a new wilderness destination, consider heading north. Rugged Canada is packed with stunning national parks, many of them easily accessible from the US by car or ferry. Depending on your destination, you could watch moose walk as if on stilts, see otters splash in rivers, or admire seals sunning on an island shore.

Canada’s 39 national parks and eight national reserves cover over 125,000 square miles, so there’s no lack of options to experience incredible nature, wildlife, and sites of historical and cultural significance. Here we list several parks that are just north of the US border — some of them not too far from US cities like Seattle and others, like those north of Montana, best viewed as an addition to a US park visit. 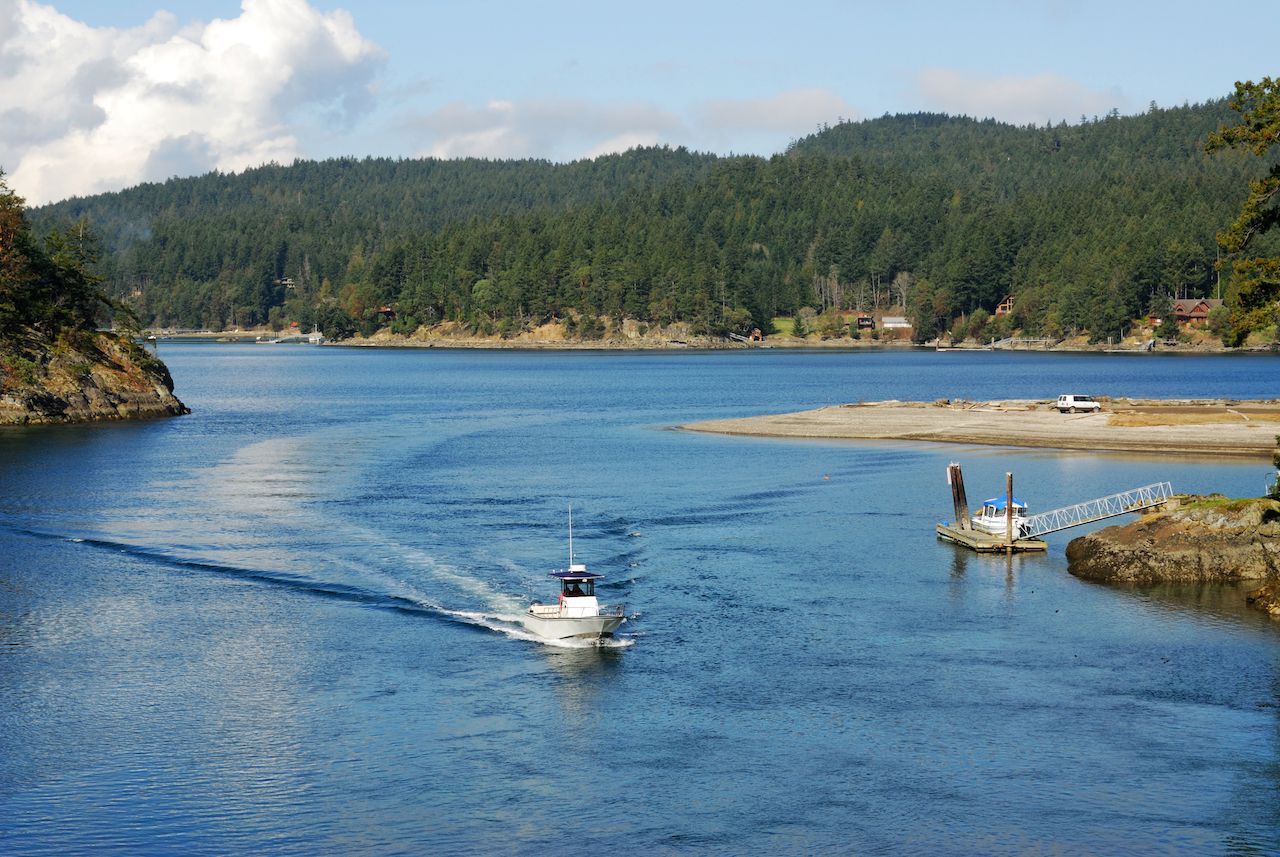 Floating between Vancouver and Victoria Island, the Gulf Islands National Park is made up of 16 different islands and numerous islets, reefs, and nearby underwater wonders. Eagles and sea birds circle below the clouds and above the island-dotted Salish Sea, itself full of seals, otters, and other marine creatures. If you’re afraid of the Canadian cold, this is the place for you, as Gulf Islands has the mildest climate of any park in Canada.

Unlike the rest of Canada’s parks, there is no gate or educational center at the entrance. Simply hop on a ferry from Vancouver, which is just a two-hour drive from Seattle. You can then kayak or take a water taxi to the island of your choice and explore mountains, observe underwater life, and learn about the First Nations groups in the area. Stay for a day or reserve a campground and sleep near the sea. 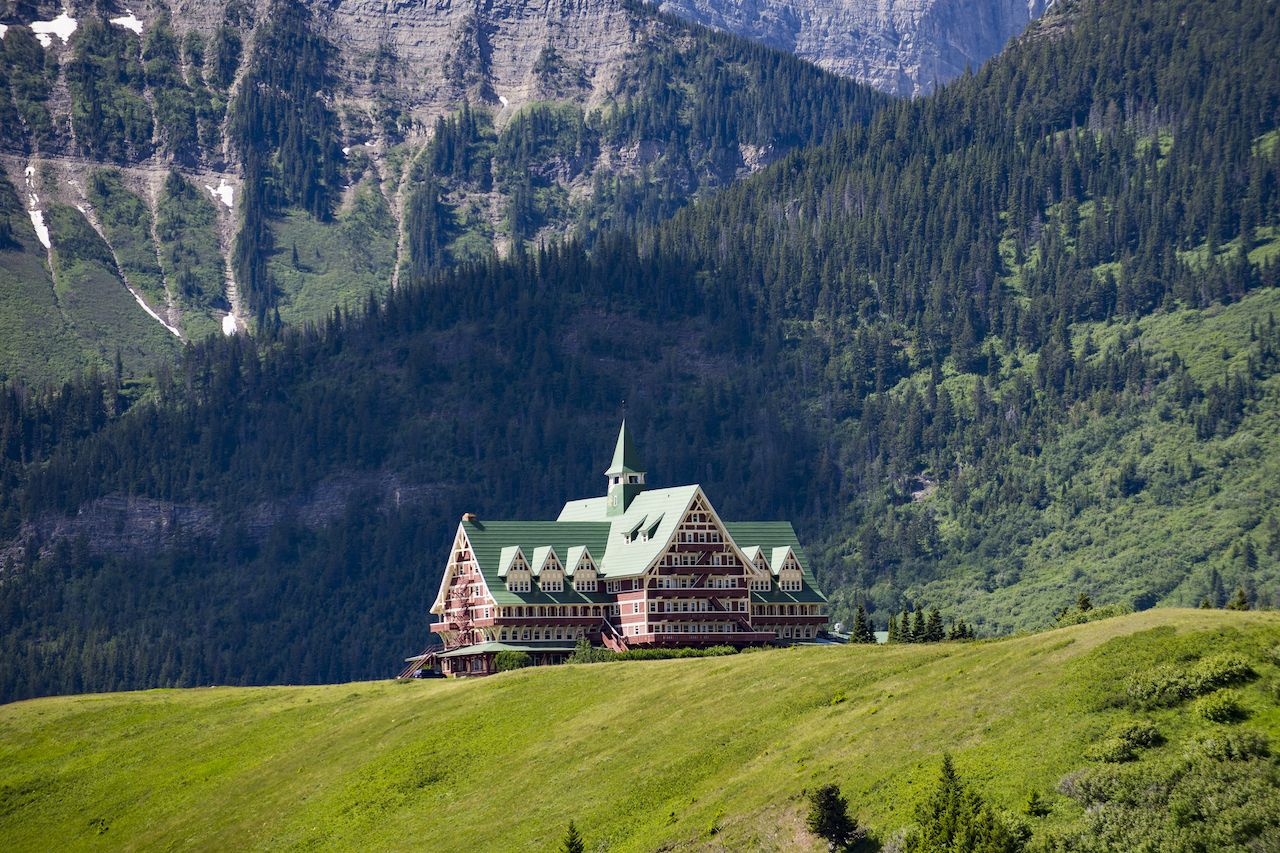 Covering both Rocky Mountains and prairie landscape, Waterton straddles the Montana border with the US’s Glacier National Park. You can tack on Waterton as a day trip from Glacier National Park or book a campsite to wake up to the sound of a trickling glacial river and, if you’re lucky, grazing moose. If you opt not to camp, you could also glam it up at the Prince of Wales Hotel.

Waterton offers up ample space to explore mountainous hikes, flat prairie vistas, and some of the deepest lakes in Canada. This stunning park with crystal lakes and endless hiking trails will not disappoint. A highlight is walking or driving the Red Rock Parkway, a nine-mile paved road that follows the Buffalo Trail used by First Nations hunters. The road winds around gentle slopes where you’ll have mountainous views and ample opportunity to see wildlife. There are several side trails you can hike on, including Red Rock Canyon where you can stroll around the canyon admiring the brightly colored rocks and take a dip in Red Rock Creek. 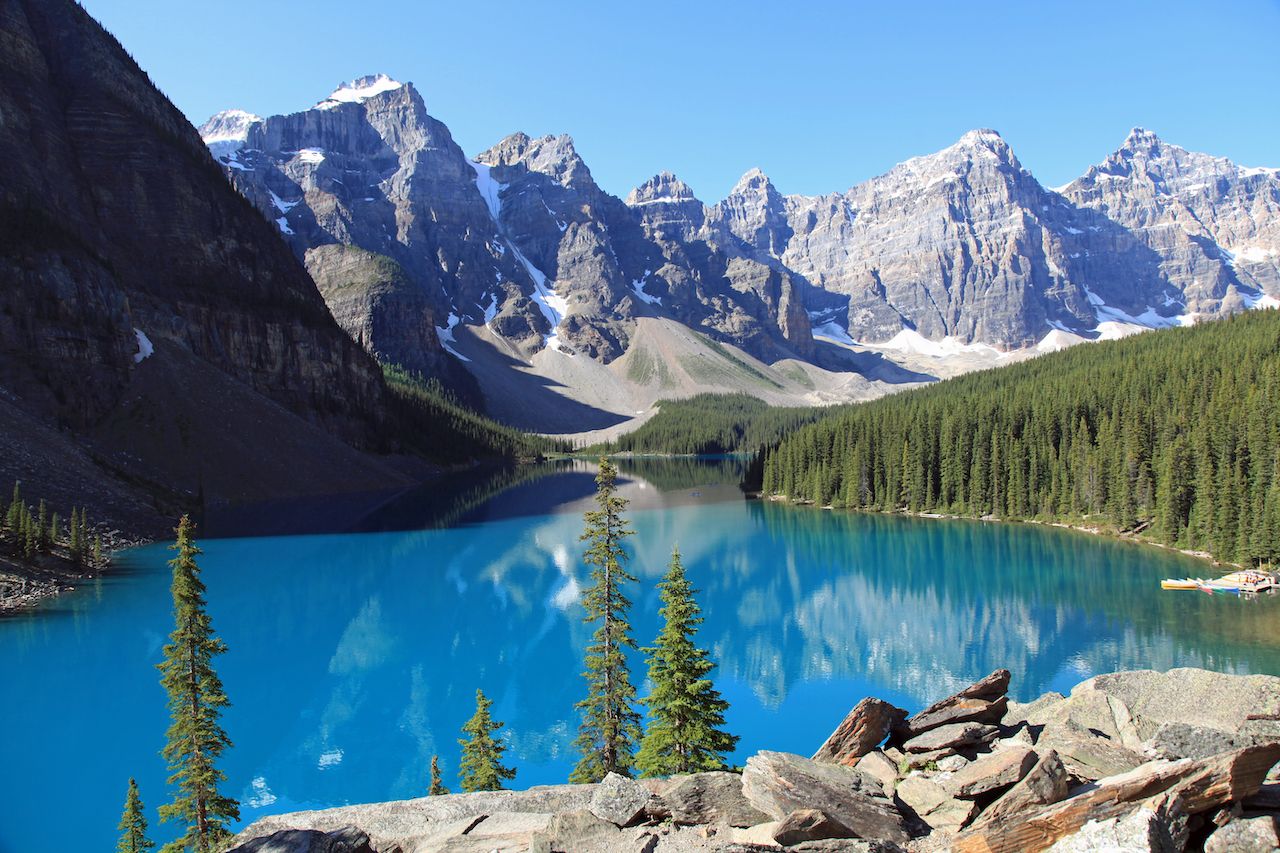 Located in the Rocky Mountains, Banff National Park is Canada’s oldest national park, established in 1885. Covering 2,464 square miles, the park is packed with mountains, glaciers, ice fields, and glacial lakes and rivers. Located a six-and-a-half-hour drive from Spokane, Washington, Banff is not exactly an easy drive from the US — but, given Banff’s splendor, we couldn’t make a list of Canadian national parks you can reach by car without putting it on the list.

There’s no shortage of things to do in Banff. Dozens of trails in varying degrees of difficulty criss-cross the park. You can hike them, tackle some via mountain bike, and explore them on cross-country skis or snowshoes in the colder months. You’ll see glacial lakes, ice fields, and forests, and you may find bears, moose, mountain goats, and elk as you explore.

Banff has 13 campgrounds, including some equipped with oTENTiks, which are a permanent tents with beds. In Banff, you could also sleep in luxury at the famed Fairmont Lake Louise. 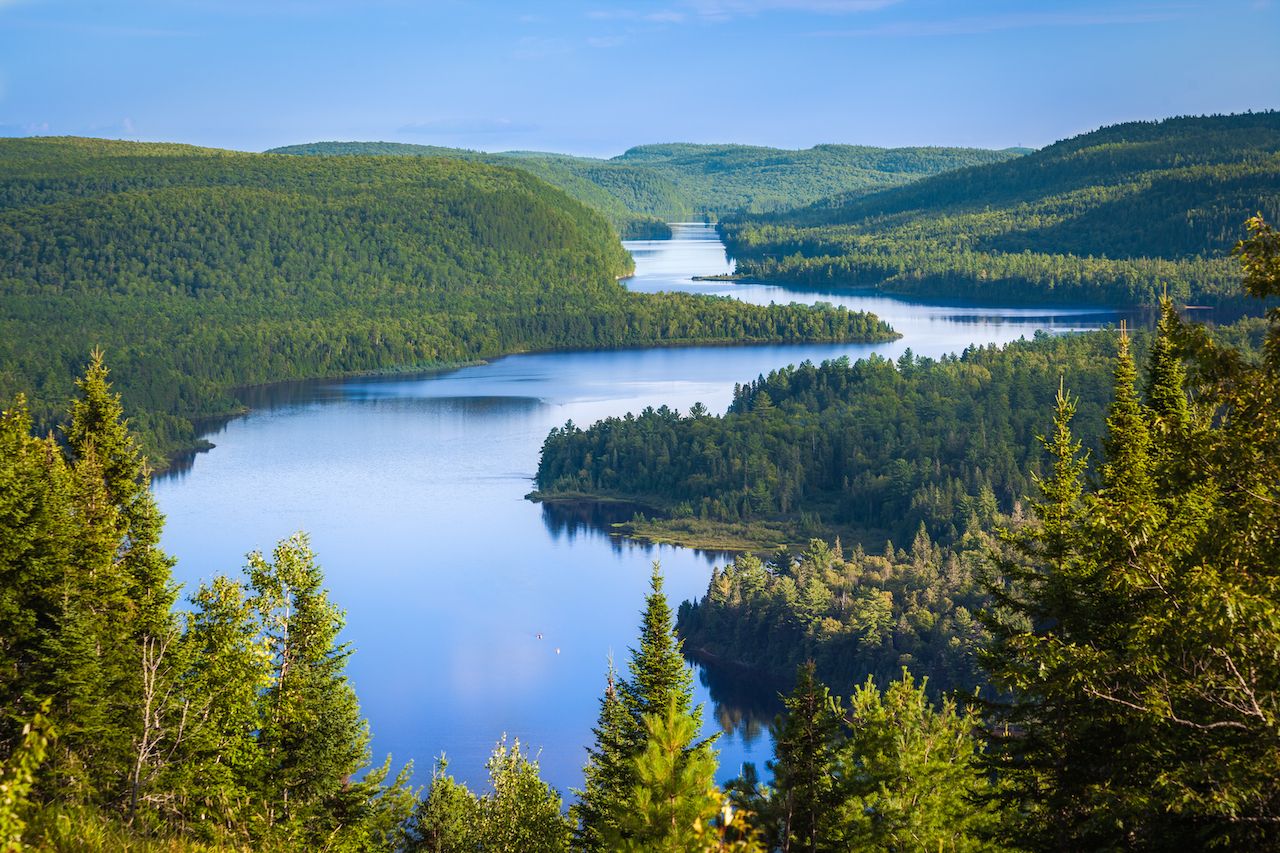 La Mauricie lies between Montreal and Quebec City, accessible to residents of Vermont and northern Maine in a six- or seven-hour drive. Based in the southern Canadian Shield area and home to over 150 lakes, La Mauricie is a perfect spot for canoeing, kayaking, and swimming enthusiasts. You can meander along river banks and jump in waterfall pools before starting a campfire and listening to the sounds of owls and other birds as you wind down for the evening. You can stay in tents or oTENTiks here.

As in many of Canada’s parks, you’ll find black bears, moose, otters, and plenty of other wildlife here. Most interestingly, La Mauricie is home to wood turtles, a North American species of turtle that isn’t often spotted in the Canadian wilderness. Be sure to take a half day at the park to walk the Les Cascades trail to visit several of the parks’ waterfalls. Bring swimming gear and snacks. 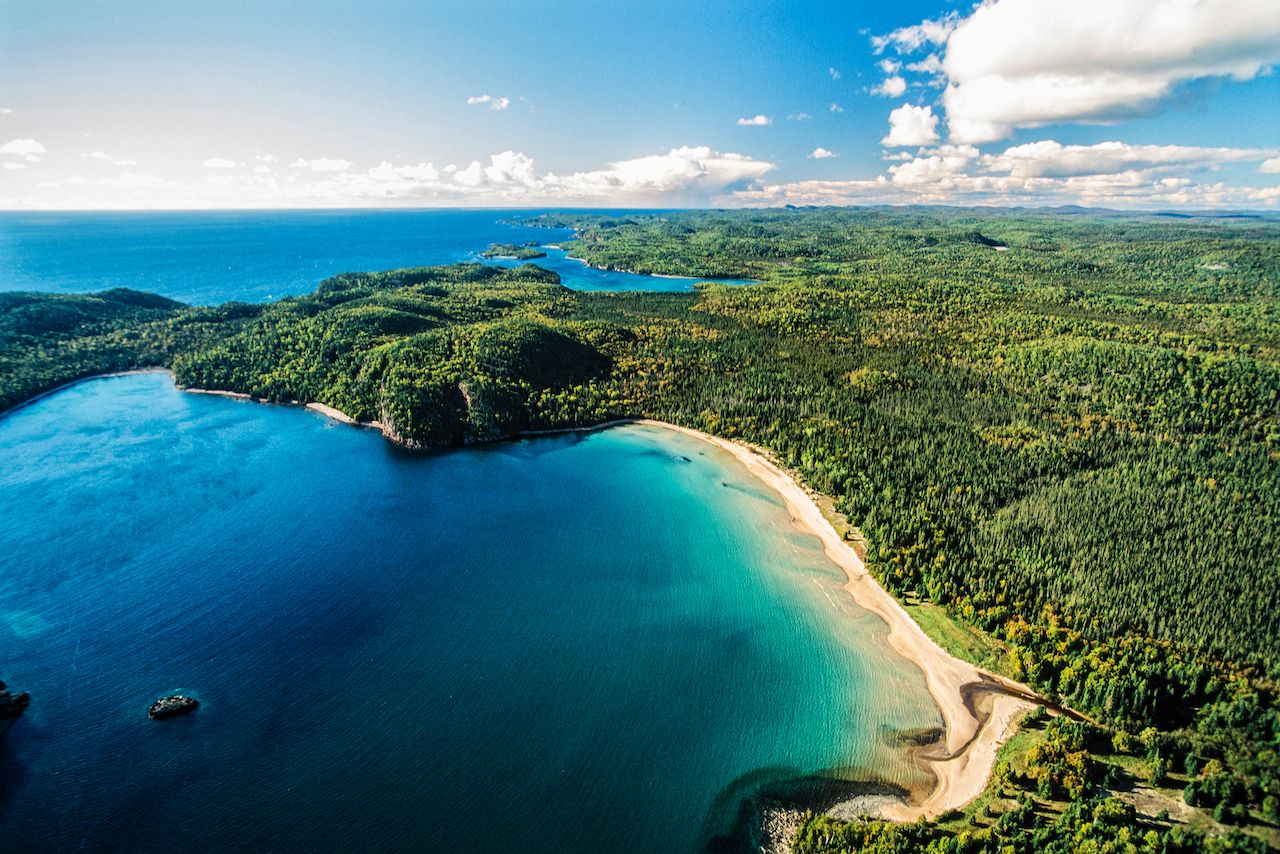 With 725 square miles of land along the shores of lake superior, Pukaskwa is home to the longest protected shoreline among the Great Lakes. On the shores of Lake Superior, Pukaskwa is accessible via a long drive from northern Wisconsin or Michigan. You’ll experience the beauty of the Great Lakes while you watch waves crash against the granite shore, and you’ll take in boreal forests, sandy beaches, and rocky cliffs as you trek or canoe your way around this park.

You’ll hear Canadian loons in the evening or possibly observe black bears feasting on berries — or taking a peek through your garbage. Also, join weekly talks to learn about the Anishinaabe First Nation that calls this park home. Hattie Cove is full of campsites; you can also head to the backcountry campsites or stay in an oTENTik. 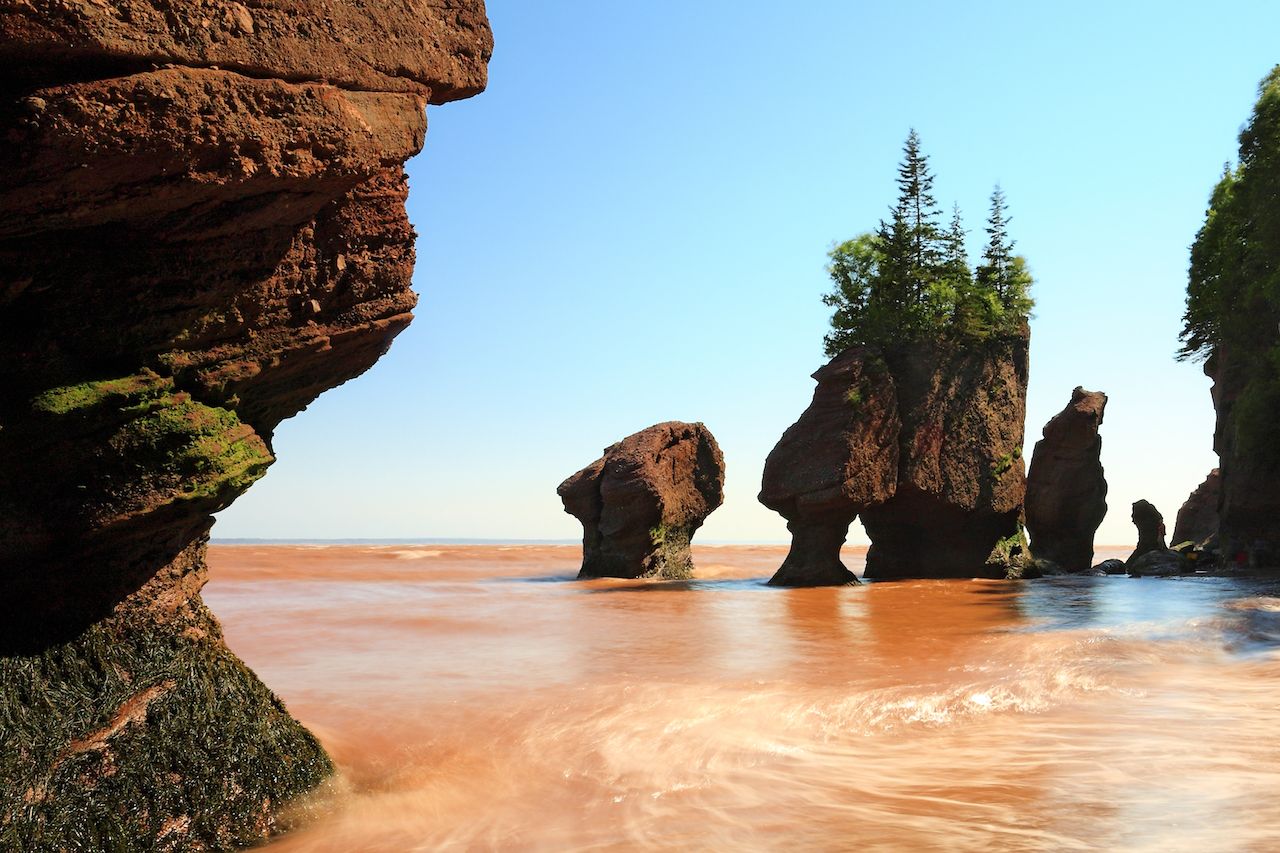 Fundy National Park is in the Maritimes, a part of Eastern Canada — including New Brunswick, Nova Scotia, and Prince Edward Island — with a unique coastal culture and the best seafood in Canada. You could spend hours on the red shores of Fundy National Park watching boats become shored and the beach expand during one of the highest tide changes in the world.

You could rent a sea kayak to get a different view of the shoreline or hike to one of the park’s 25 waterfalls for a freshwater dip while exploring Canada’s only officially bilingual province. Finish your day with a fresh lobster or seafood dinner at one of the many seafood shacks and eateries in the area. After dinner, you could stay in a tent, oTENTik, rustic cabin, or, for a family of four, get cozy in a yurt. 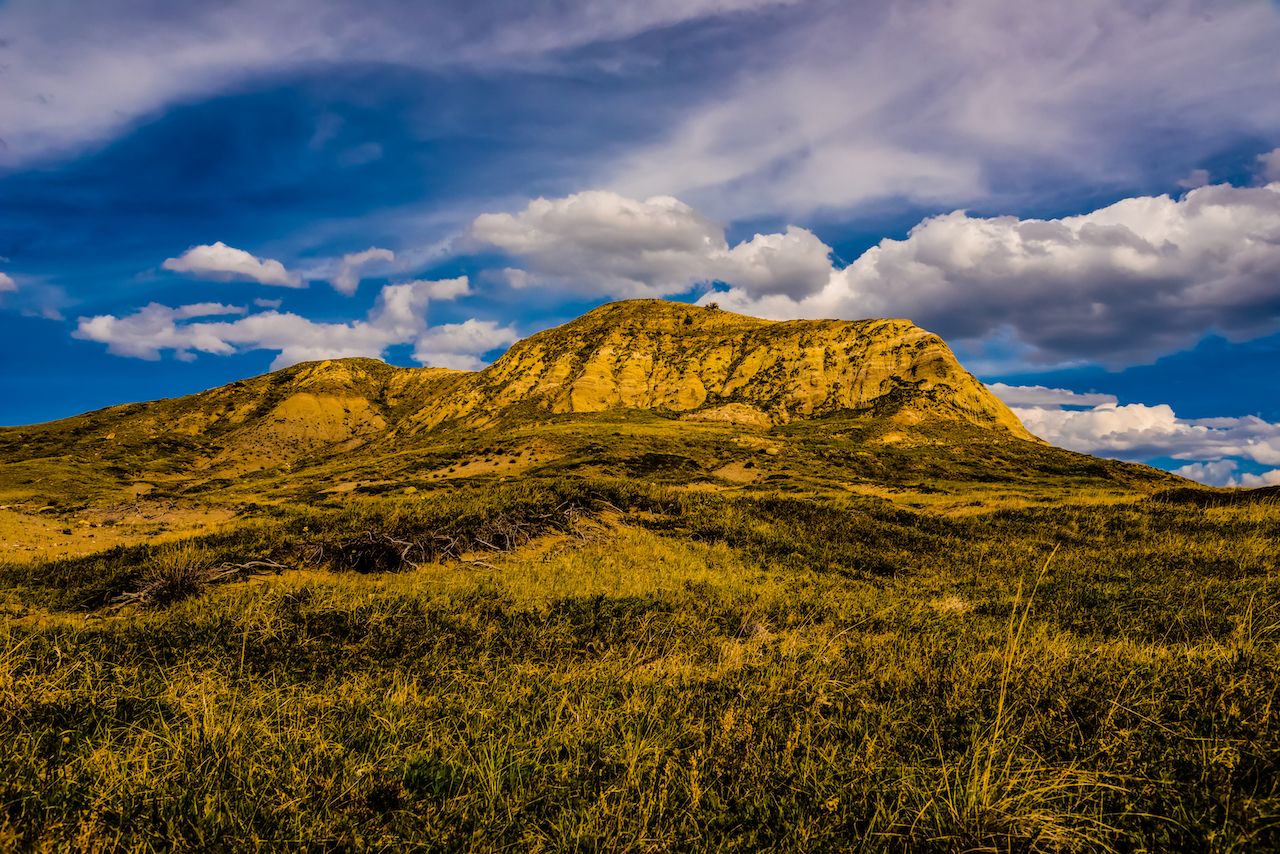 One of only two national parks in Saskatchewan, this park is part of the Prairie Grasslands protected region. The unique climate and landscape make it home to several animals and plants found in few other places — such as bison, black-tailed prairie dogs, rattlesnakes, and needle grass. It’s just north of the border with Montana, but the nearest sizable city is still more than a five-hour drive away.

What you’ll see, once you finally arrive in the “land of the living skies,” are some of the most beautiful sunsets in the world as you glimpse the buffalo roaming on wide open vistas. You could paddle a kayak down the Frenchman River, discover a backcountry trail, or drive around the Badlands Parkway before retiring to your oTENTik or teepee and waking up with the sunrise. If you do want to stay in a teepee, be sure to reserve it ahead of time. 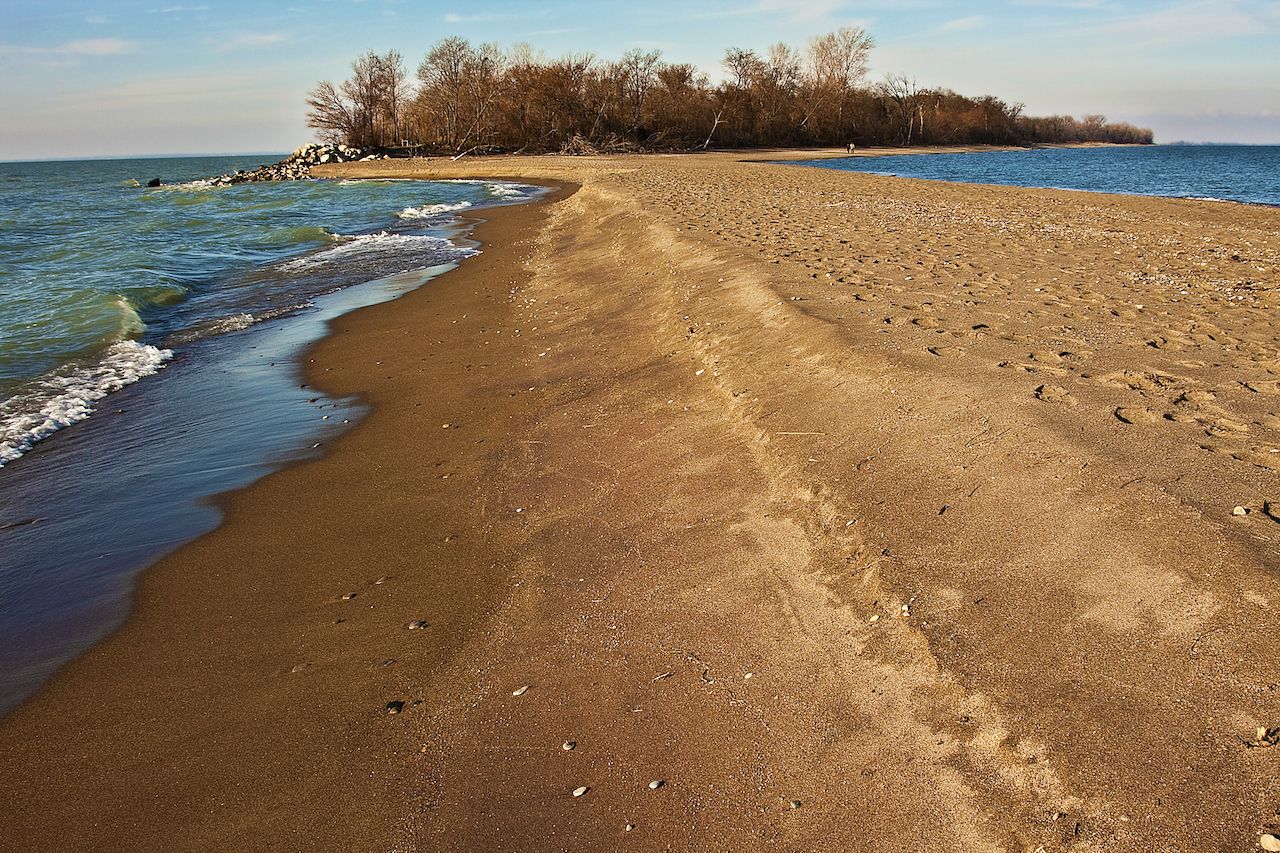 The southernmost point of mainland Canada, Point Pelee is less than an hour’s drive from Detroit. This small park makes a great day trip or a lovely spot for a weekend camping getaway. Walk along glacial sand, canoe down the marsh, and, in the summer months, swim at one of the warmest beaches in Canada. Around 70 percent of the park is covered in marshland, and the rest is composed of forest and coast.

For birdwatchers, Pelee is one of the best spots in North America to take your binoculars for a spin. Over 370 bird species have been spotted in the park, and you can even visit for the Festival of Birds held each spring in the park. In summer, you can also take the shuttle to the tip. This short ride to the southernmost point in Canada gives you can unobstructed lake views and makes for a great spot to watch the sunset. Then if you want to stay the night, you can opt for an oTENTik in the park. 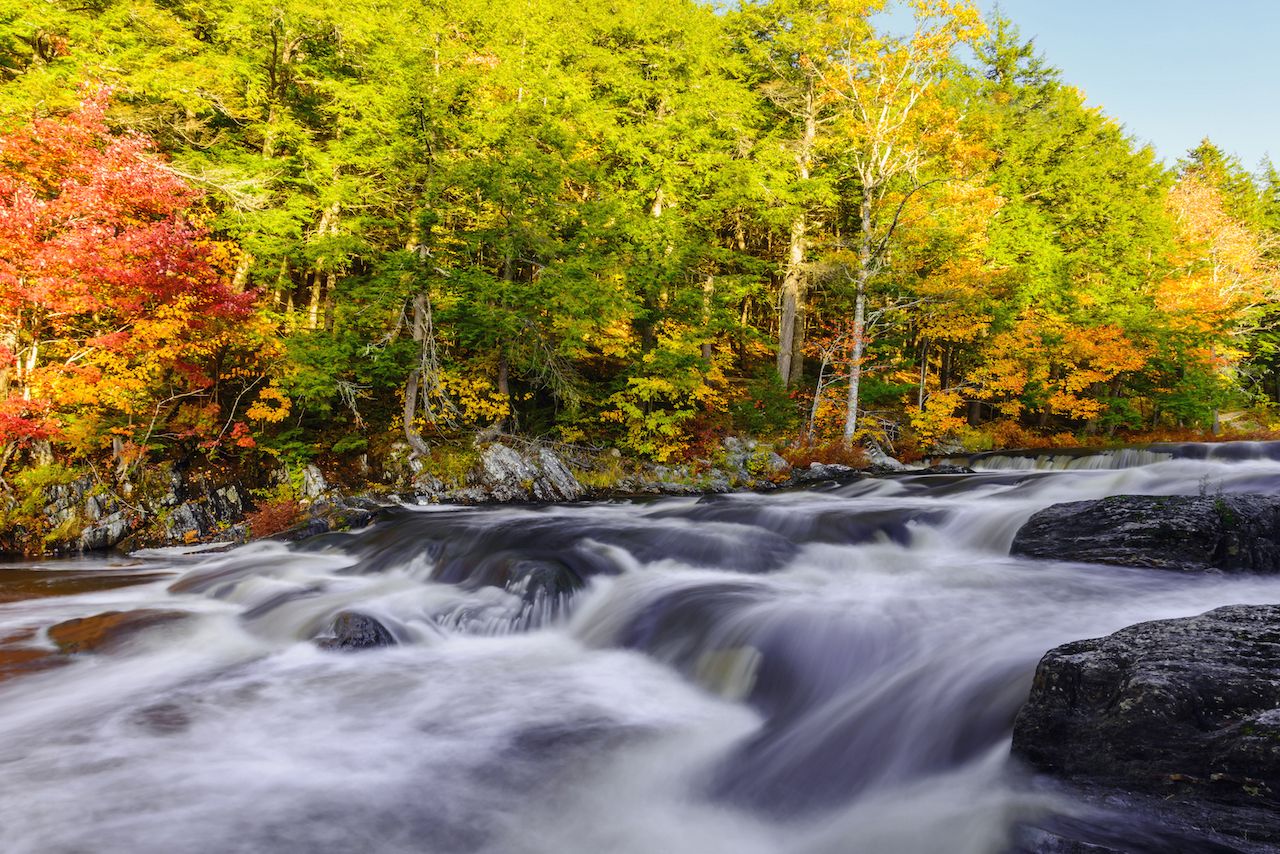 Kejimkujik is the only park in Canada that is both a national park and a National Historic Site. Spread over two land areas, the inland part explores the history of the Mi’kmaq cultures in the region and the coastal area a short drive from Maine. Nova Scotia is one of the best places to experience the politeness of Canadians. Nod hello to fellow hikers as you explore the endless trails looking over coastal bogs, beaches, lagoons, and fauna in Kejimkujik.

You can walk to the highest point in the park, Mount Tom, enjoy the stunning coastal views. Amidst the beauty of nature here, join a tour to discover ancient Mi’kmaq stone carvings and learn about Mi’kmaq traditions in the area. Lodging options here include cabins, tents, oTENTiks, and yurts. Less than a 10-minute drive from the park, you could also stay in a teepee at Mersey Rivers Nature Retreats.

Ski & SnowWhy Banff Should Be the Base for Your Next Backcountry Adventure
Tagged
National Parks Canada
What did you think of this story?
Meh
Good
Awesome