This May, over a million tulips will envelop Canada’s capital city of Ottawa. It’s a gorgeous tradition that traces its origins to an exiled princess, an industry titan, and a world-famous photographer but for locals, it’s simply our favorite time of year. The Canadian Tulip Festival is celebrating its 70th anniversary between May 13 and 23, 2022, and has the distinction of being the largest event of its kind in the world. Here’s how it started and what visitors can expect during this special year.

Nearly all Ottawa residents credit the tulip tradition to the Dutch royal family and they’re not wrong — for the most part. Canada played host to the exiled Dutch heir, Princess Juliana, during World War II. The princess was a firm favorite among her Ottawa neighbors, insisting she be treated like any other woman whose spouse was fighting in Europe. However, the birth of her third daughter, Princess Margriet, required some extraordinary planning. The maternity ward of Ottawa’s Civic Hospital was declared extraterritorial so the newborn did not lose her place in the Dutch line of succession. Her birth on January 19, 1943, was a rare bright spot in a weary world. In 1945, Canada received a gift of 100,000 tulip bulbs from the Netherlands, a thank you for sheltering the royal family and for the pivotal role Canadians played in liberating the Netherlands during the war. Princess Juliana herself sent an additional 20,500 bulbs the following year and the gift-giving tradition has carried on every year ever since. 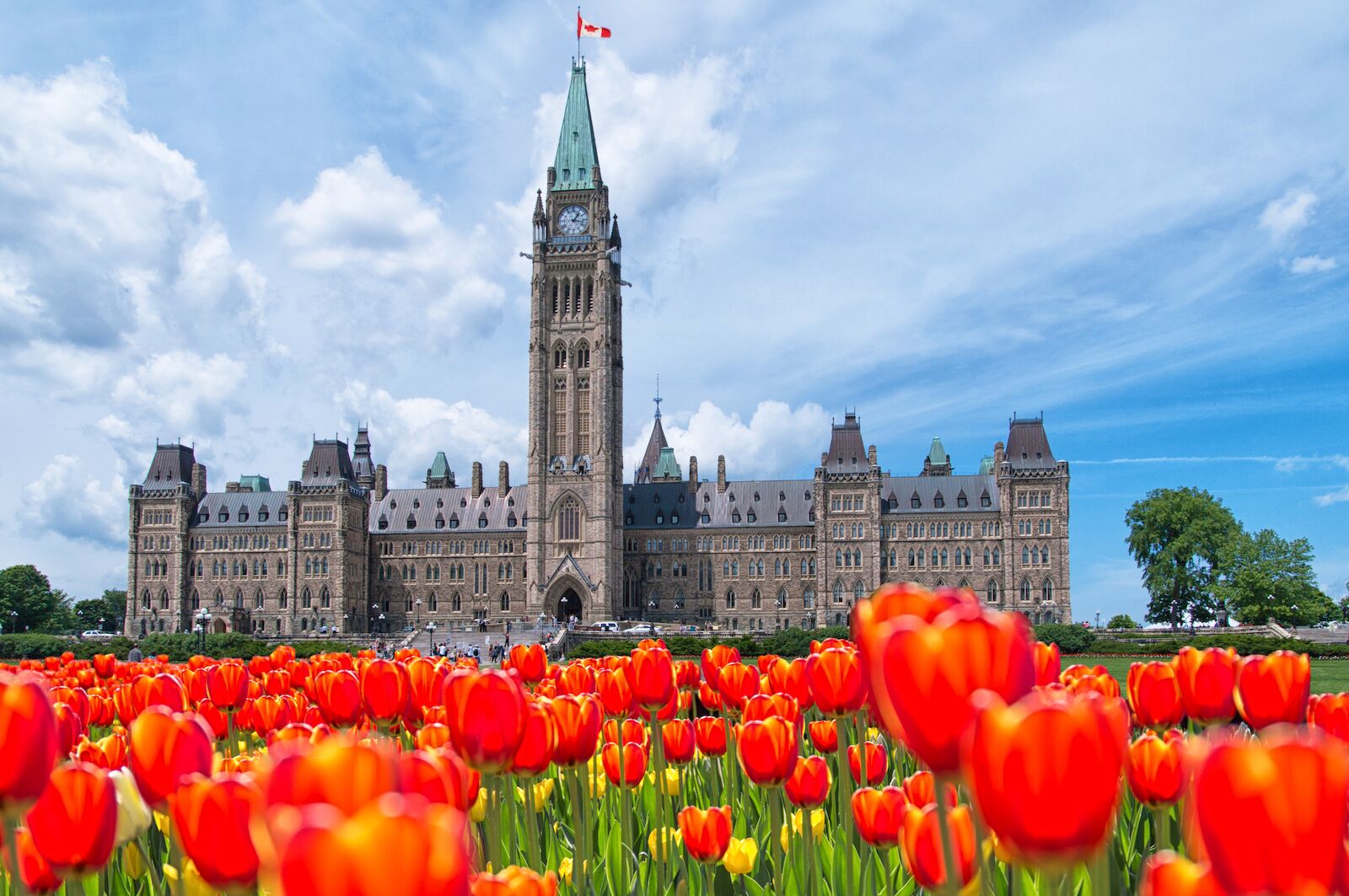 However, the Dutch shipment in 1945 was not Ottawa’s first gift of tulips. Richard Seymour Cobley, a British titan of the commercial flower industry, donated 83,000 tulip bulbs between 1941 and 1943 to thank Canadians for their ongoing war efforts. Between his generosity and the gratitude of the Dutch, Ottawa was soon known for its jaunty blooms. World-renowned photographer and Ottawa resident Malak Karsh took the tulips as his muse and it was at his suggestion that the Canadian Tulip Festival launched in 1953.

Over the past 70 years, the Canadian Tulip Festival has grown into a legendary event. Some of the biggest names in music, including Alanis Morissette, have appeared on the festival’s concert stage. Renowned thought leaders like Salmon Rushdie and Jared Diamond have presented at symposiums. And important dignitaries, including President John F. Kennedy and First Lady Jacqueline Kennedy who visited Ottawa during the 1961 tulip season, attended over the years. But since 2019, the festival has had a new focus. Under the leadership of executive director Jo Riding, the target is now to “re-root” the event back to its origins: heritage and horticulture. 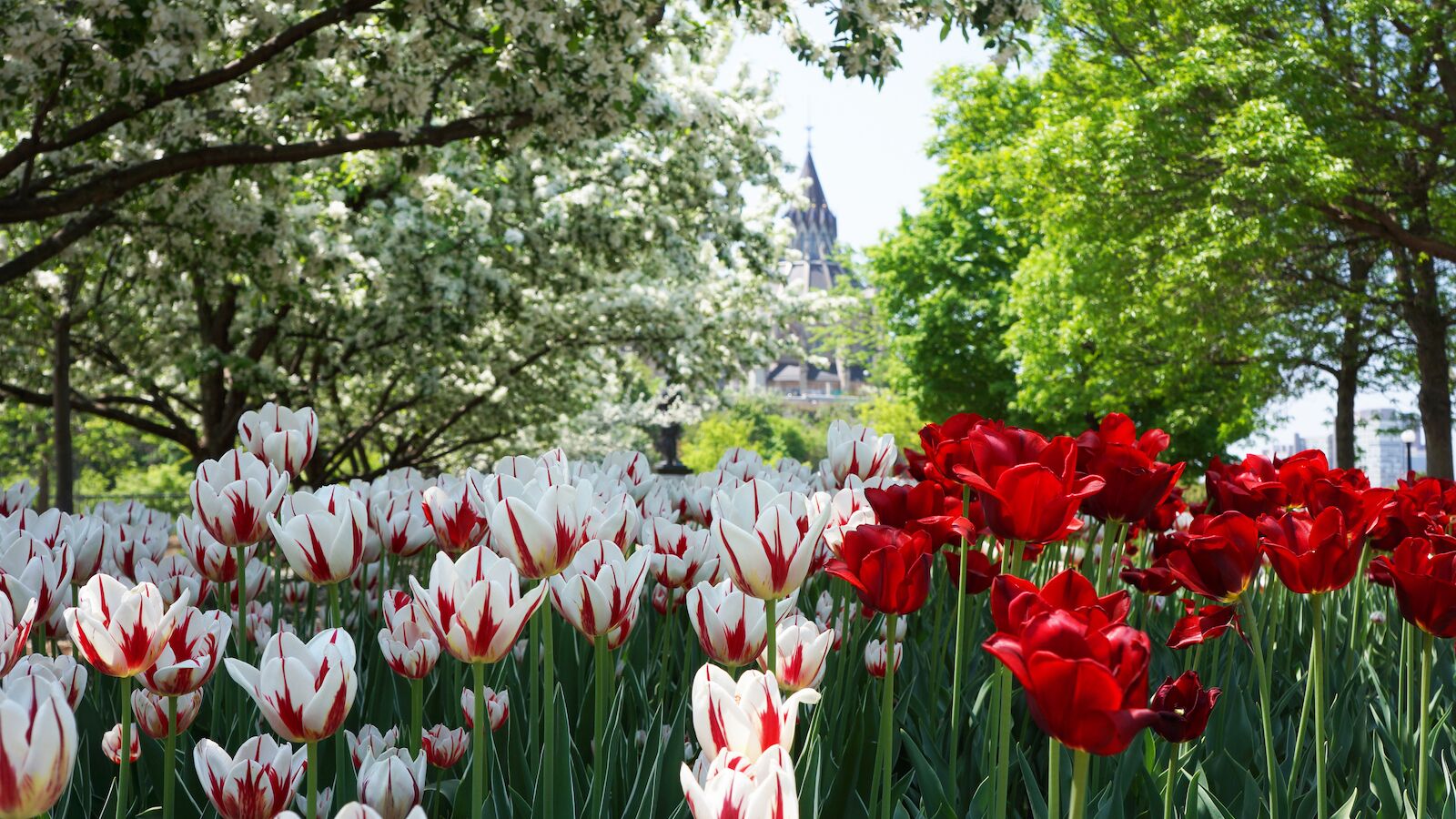 In 2022, that means commemorating local residents who died during the campaign to liberate the Netherlands. A nightly walking tour called “Ghosts of the Glebe” will bring visitors through Ottawa’s Glebe neighborhood, sharing the stories of young men who died while in service. Riding says: “It’s really important that we continue the story forward so that new generations don’t forget. And a lot of people, even locals… they don’t know the story. So it’s really important for us to continue that mission of commemorating and celebrating our soldiers and they did so much in the liberation of the Netherlands.”

The tours are one of many evening activities. In Commissioners Park, home to about one-third of Ottawa’s tulips, select flower beds will be illuminated at night for the first time. Guests will also enjoy open-air screenings of Canadian Film Board movies come evening. However, the real excitement is taking place just a few feet away at the Dow’s Lake Boardwalk.

16 special planters have been placed along the boardwalk and illuminated with black lights in a unique artistic arrangement. This display is intended to showcase the flowers through the eyes of pollinators. Riding says: “Bees and butterflies and all of those guys, they see in the UV spectrum. So what’s amazing is, to us, we just get itchy and sneezy, but to them, they can see the pollen going everywhere.” She says that pale bulbs, including shades of white, cream, and light pink, were specifically selected for how well they present under the black lights and it promises to be unlike any other tulip beds.

Whether visitors are exploring by day or night, there are three special tulip spots that should be on everyone’s list for the Canadian Tulip Festival. The first is at Commissioners Park itself, at the Queen Juliana gift bed. It’s here that the bulk of the tulips donated annually by the Netherlands are planted and it’s a wonderful opportunity to reflect on the powerful friendship between the two countries.

The second is at the Civic Hospital, just a short distance away. The small bed here also contains tulips which are part of the annual donation. In fact, a stipulation of Princess Juliana’s original 1946 gift was that a tulip bed be planted at the hospital. 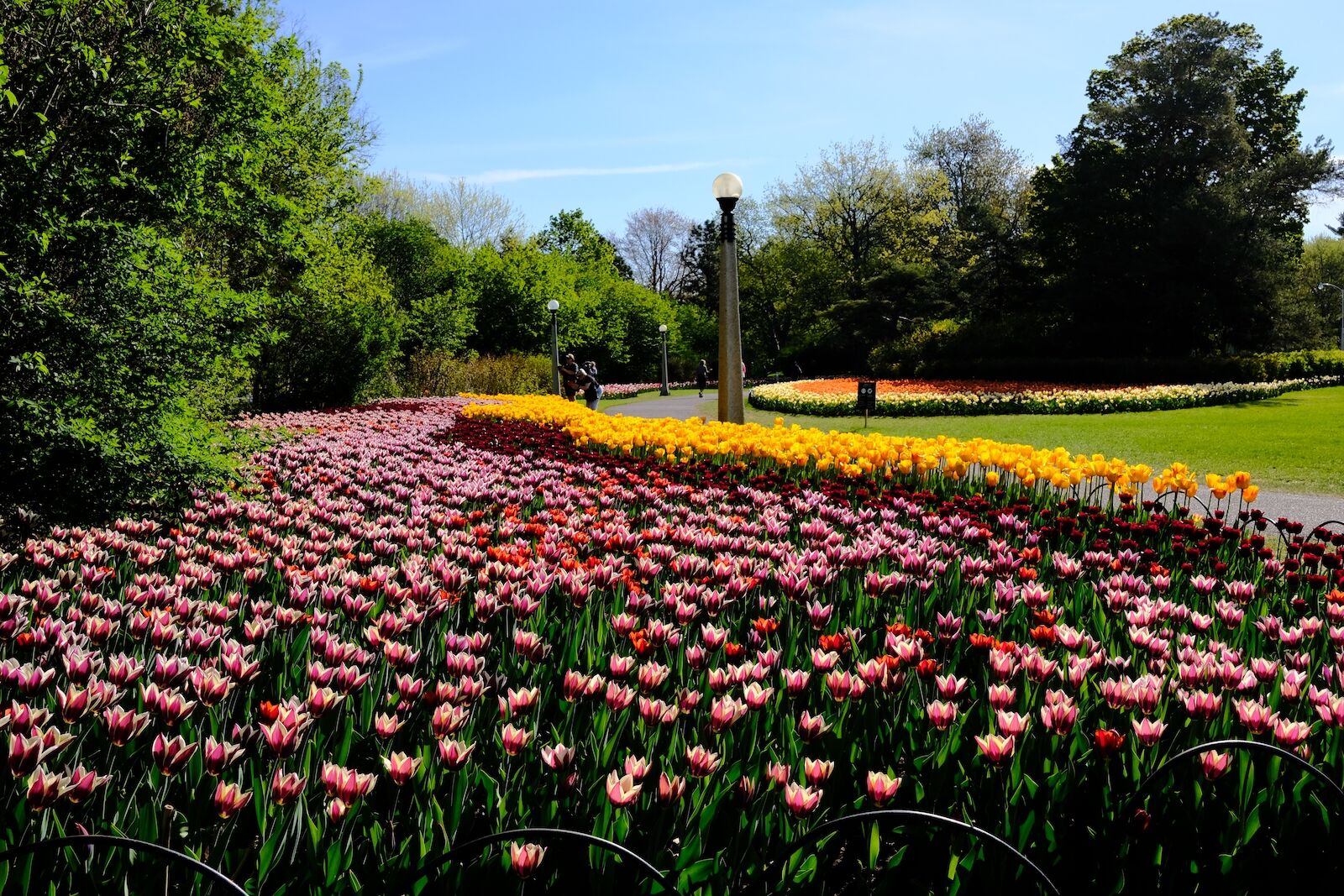 And finally, it’s well worth going downtown and not just to see the tulips which grace Parliament Hill and nearby government buildings such as Ottawa City Hall, the National War Memorial, and more. Your destination is the pretty flower bed at St. Andrew’s Presbyterian Church. It was here that Princess Margriet was christened. The church receives 100 bulbs from the Dutch embassy every year to this day. Elizabeth Phillipson, an Elder of St. Andrew’s and a volunteer archivist, says: “We open our doors to visitors and tourists all summer, with a few of us as guides, and when we tell the story of Princess Margriet, so many have never heard of it, or the tulips.” Not many people in Ottawa know about the history of this flower bed so you’ll definitely be among the festival’s best-connected visitors if you go.

Where to see the blooms in Ottawa during the Canadian Tulip Festival:

To learn more about the Canadian Tulip Festival, visit their website.

FestivalsYour Photo-Filled Guide To Seeing the Best Tulips in and Around Amsterdam This Season
Tagged
Festivals Ottawa, Canada
What did you think of this story?
Meh
Good
Awesome

a Mysterious Wildcat Caught on Video

6 Entrepreneurs Shaking Things Up in Ottawa

7 Craft Beers You Have To Try in Ottawa

You're Invited: Matador To Host Free Interactive Events in Toronto and Ottawa

Worth the Trip: Bluesfest in Ottawa