There’s nothing like tulip season in Amsterdam. The Netherlands is world famous for its tulips, and becomes a colorful patchwork of flower markets, gardens, and exhibitions every spring. This year, after a two-year hiatus due to the pandemic, tulip season will be in full bloom with close to no COVID restrictions.

Tulips are originally from the Middle East and Central Asia. The flowers became popular in Holland after they were planted by the 1590s, and over the next century became a high-priced status symbol with their own stock exchange established in 1636.

The bubble popped in 1637 (an event known as Tulipomania), though the tulip love carries on. The Netherlands exports about $6.8 billion of flowers annually. It makes up about 60 percent of the global cut flower trade with 1.7 billion every year. 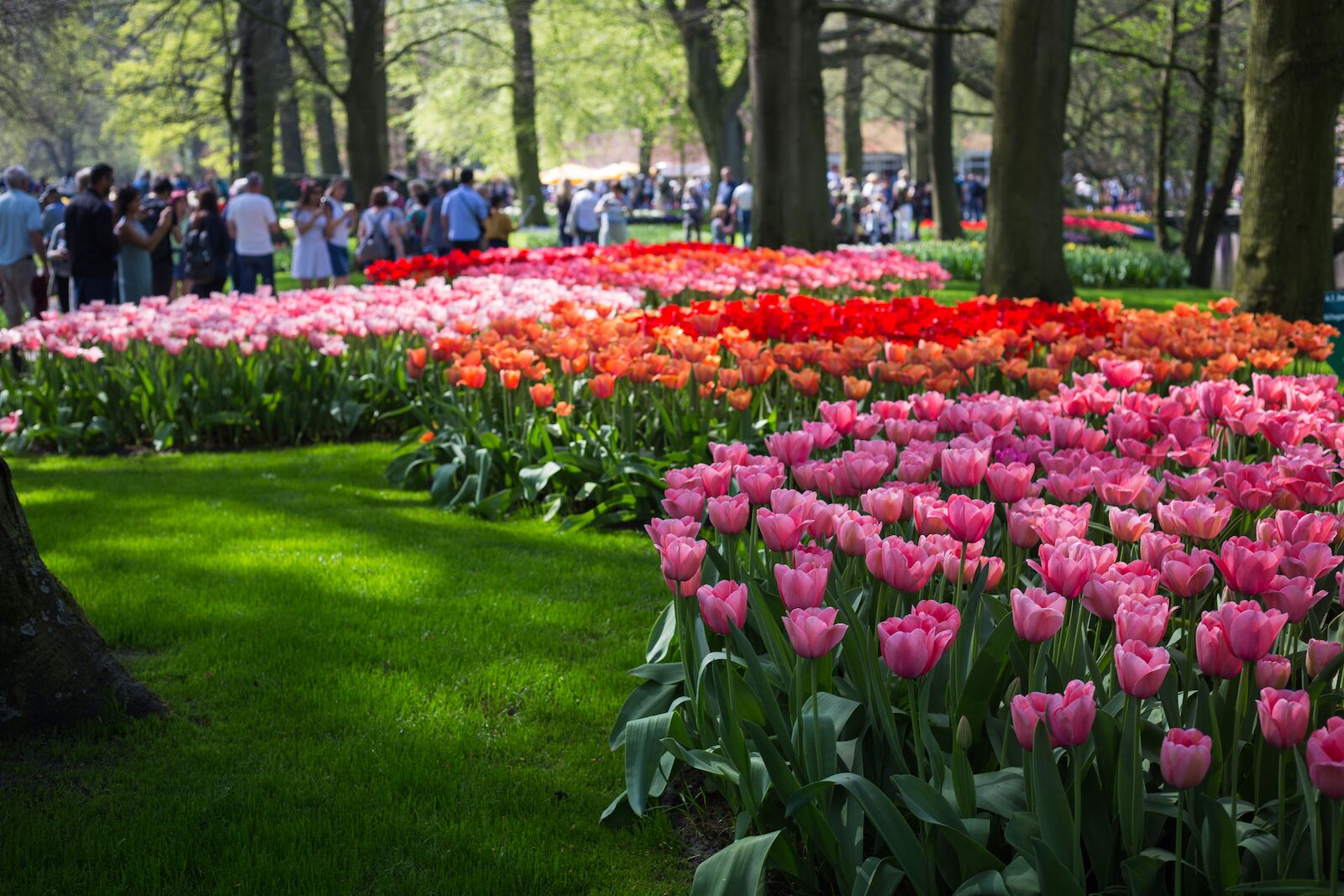 It’s not just tulips, of course. March is the start of crocus season (lavender, yellow, and white flowers in the iris family), and then daffodils and hyacinths come out. Tulips are actually the last of the spring flowers in the Netherlands. Tulips reach peak bloom in mid April and last until early May in and around Amsterdam.

Cool nights bring the tulips out, and the consistently moist soil conditions in the Netherlands helps, too. In particular the polders, which are plots of land surrounded by water — whether that be land reclaimed from a lake, a flood plain, or marshes.

While tulips fill Amsterdam in the spring, it’s not where they’re primarily grown. The nearby Flevoland province has the majority of tulip farms, with The Hague, Leiden, and Alkmaar having a large number as well. That said, you don’t have to look far to find tulips in many rural areas near Amsterdam and much of the Netherlands.

For the best experience, you’ll want to head about 30 minutes outside of Amsterdam to the Keukenhof, which is the world’s biggest flower exhibition and more than 7 million bulbs bloom through spring. Another world’s biggest — in this case flower auction — is at FloraHolland in Aalsmeer, also about a 30 minute drive from Amsterdam.

Here are the best ways to see tulips in the Netherlands. 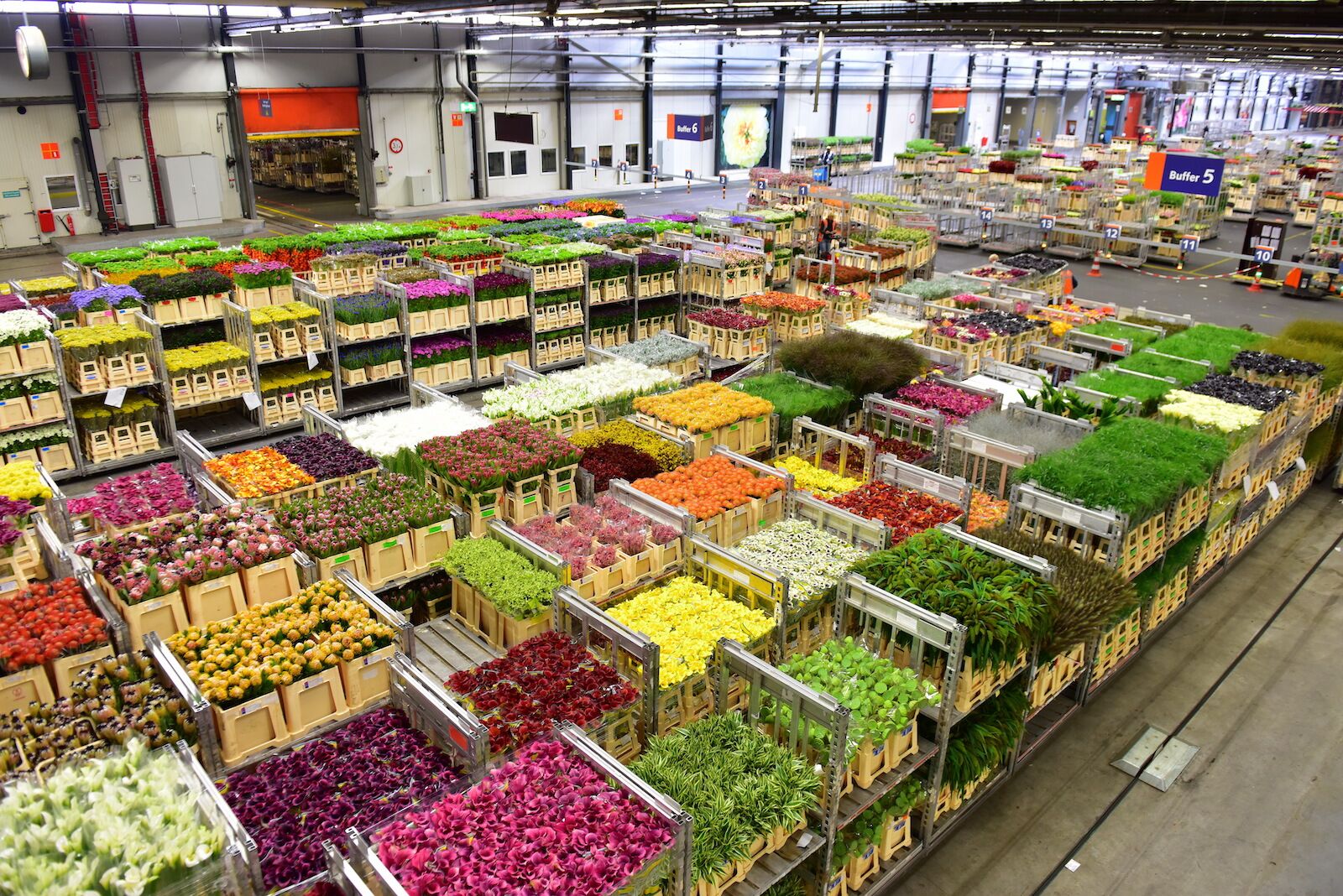 More than 20 million flowers and plants are sold through this auction company with locations in Aalsmeer, Naaldwijk, Rijnsburg, Venlo, Bleiswijk, and Eelde. Ninety percent of the Dutch flower trade comes through the company, which handles plants (primarily roses, tulips, and chrysanthemums) from 50 countries. Aalsmeer is the best option for tourists from Amsterdam, as there’s a visitors center where early risers can see the action for themselves. 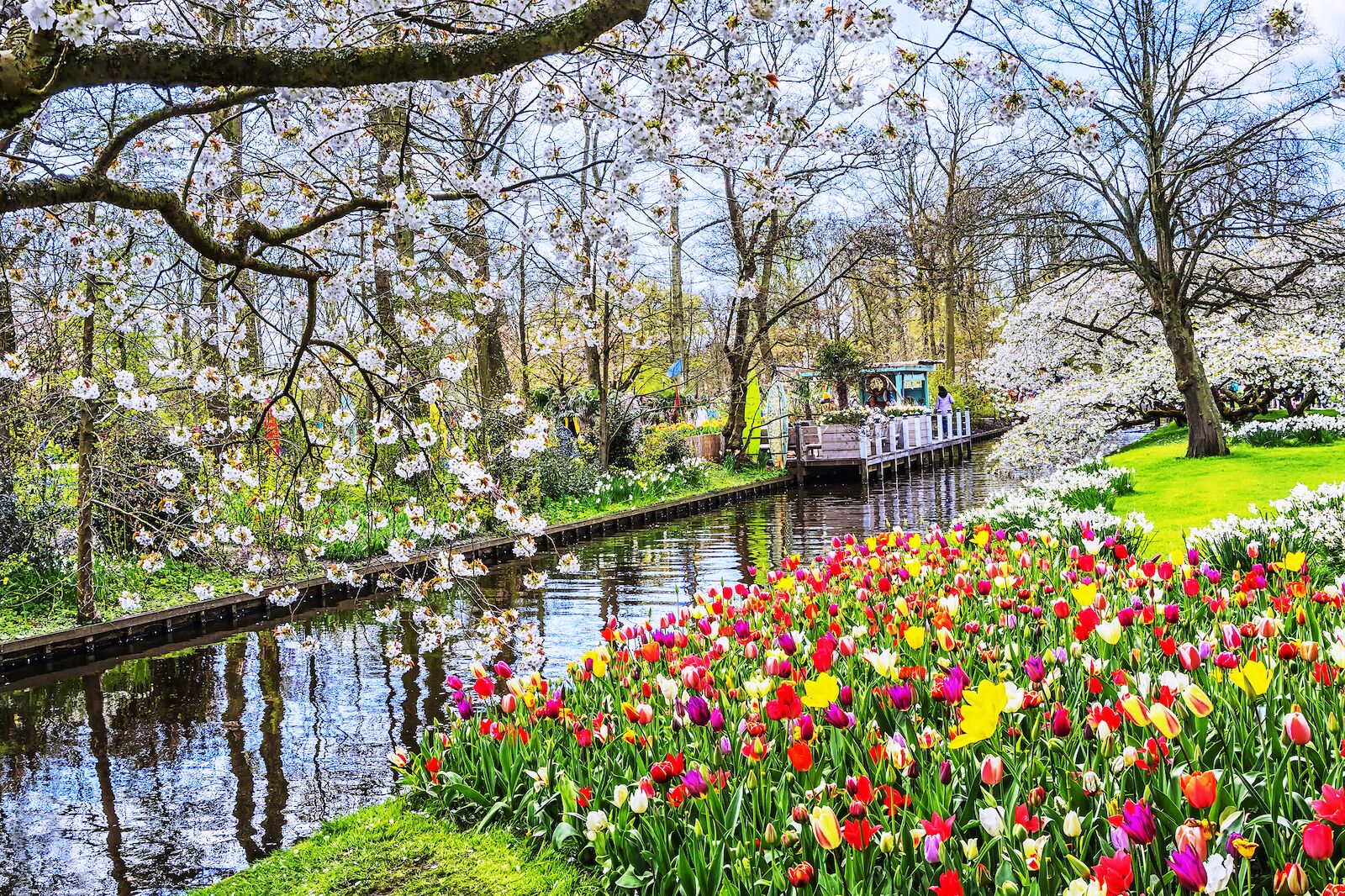 More than 7 million flowers bloom at Keukenhof in the spring. It’s a must-visit for any flower lovers (or anyone who wants that perfect photo in front of flowers), as it’s the largest flower park in the world. Along with tulips, there are carnations, daffodils, hyacinths, orchids, roses, lilies, and others. Best of all it’s easy to get to — just 30 minutes whether you’re coming from Amsterdam, The Hague, Haarlem, or Leiden.

The season for visiting is as short as the bloom season. Keukenhof opens its gardens and four pavilions from mid-March to mid-May. You also won’t be alone, as more than a million people visit.

If you came for the wrong season, Keukenhof Castle has 150 different types of dahlias that are showcased during Keukenhof Dahlia Days at the end of August. 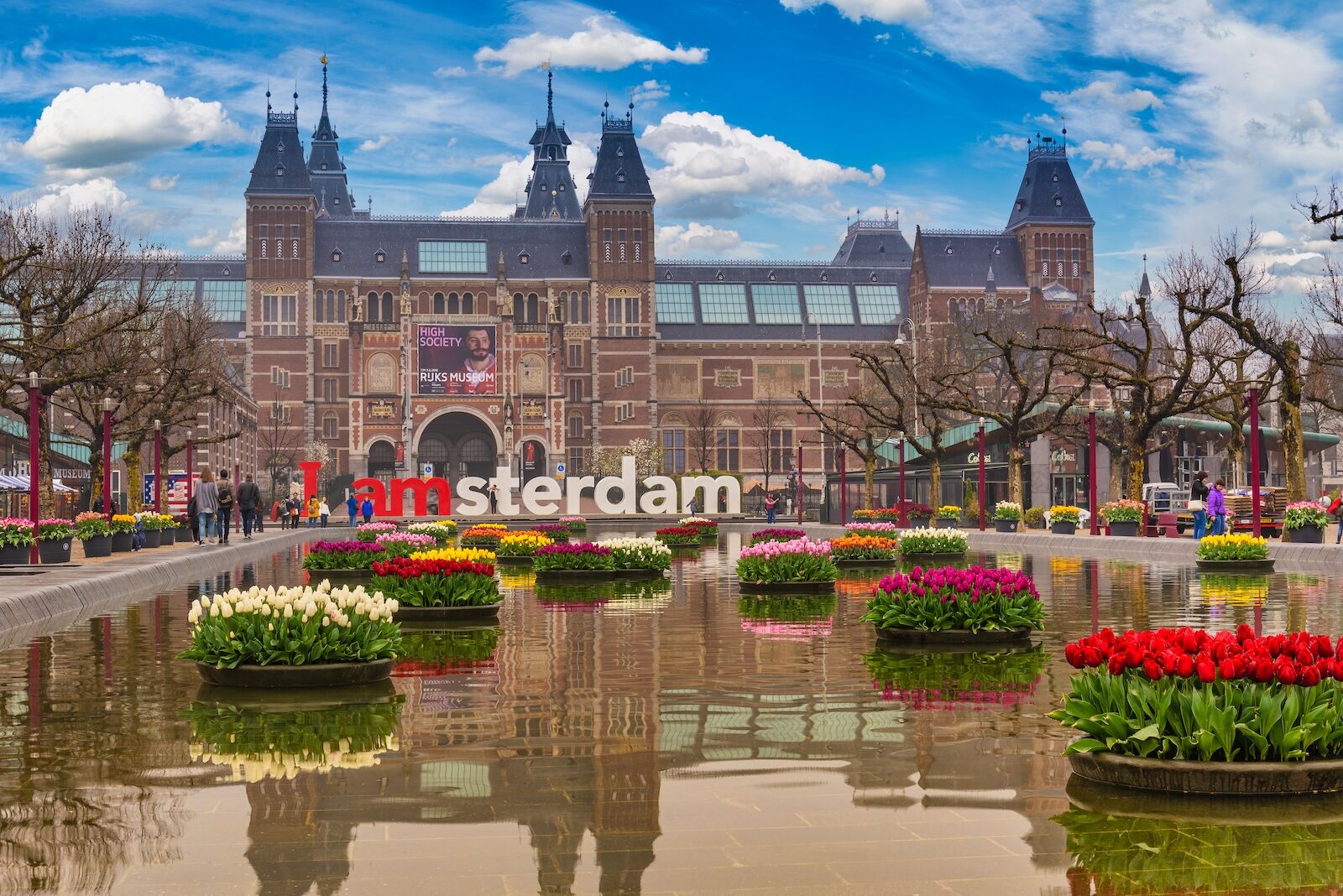 The city starts tulip season early in January with a temporary, 200,000-tulip garden on Dam Square that visitors can pick for free. This ends before peak tulip season, but there will still be plenty of flowers at museums, gardens, and elsewhere around the city to see throughout April during the Tulp Festival (which lasts as long as the bloom). There are 5,000 tulips of 100 varieties at the Hermitage Amsterdam’s public garden alone.

Bloemenmarkt, the floating flower market, is perhaps the most famous Amsterdam flower attraction. It’s year-round, but tulip season makes for a special time. The Amsterdam Tulip Museum in the Jordaan (€5) can provide you with more tulip history and bulbs. 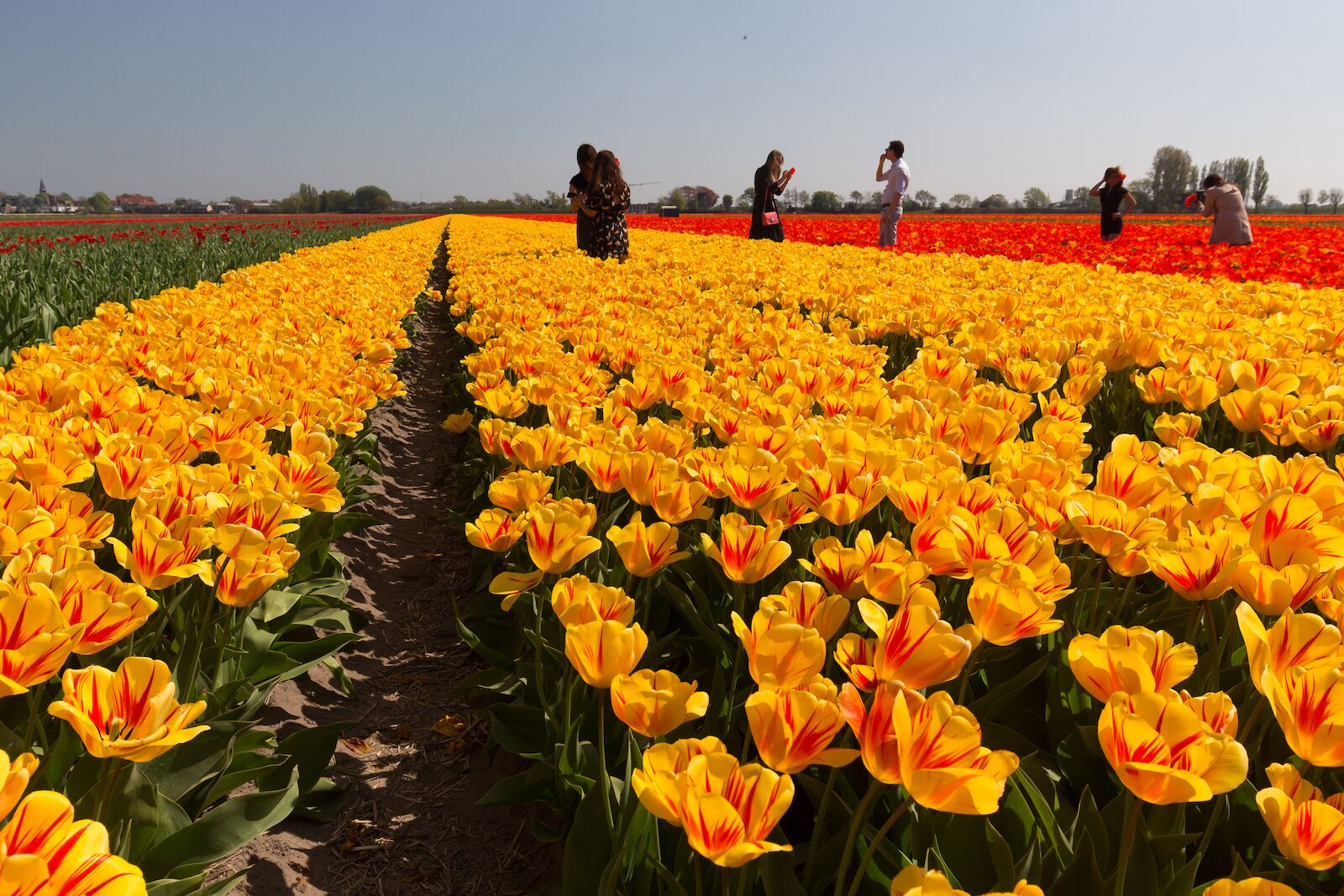 Get outside of Amsterdam to see a 12-mile road from Haarlem to Leiden that’s lined with tulips, crocuses, daffodils, and hyacinths. Do as the Dutch do and see the strip by bike (cars work too, though).

Visit a picking garden to gather your own tulips 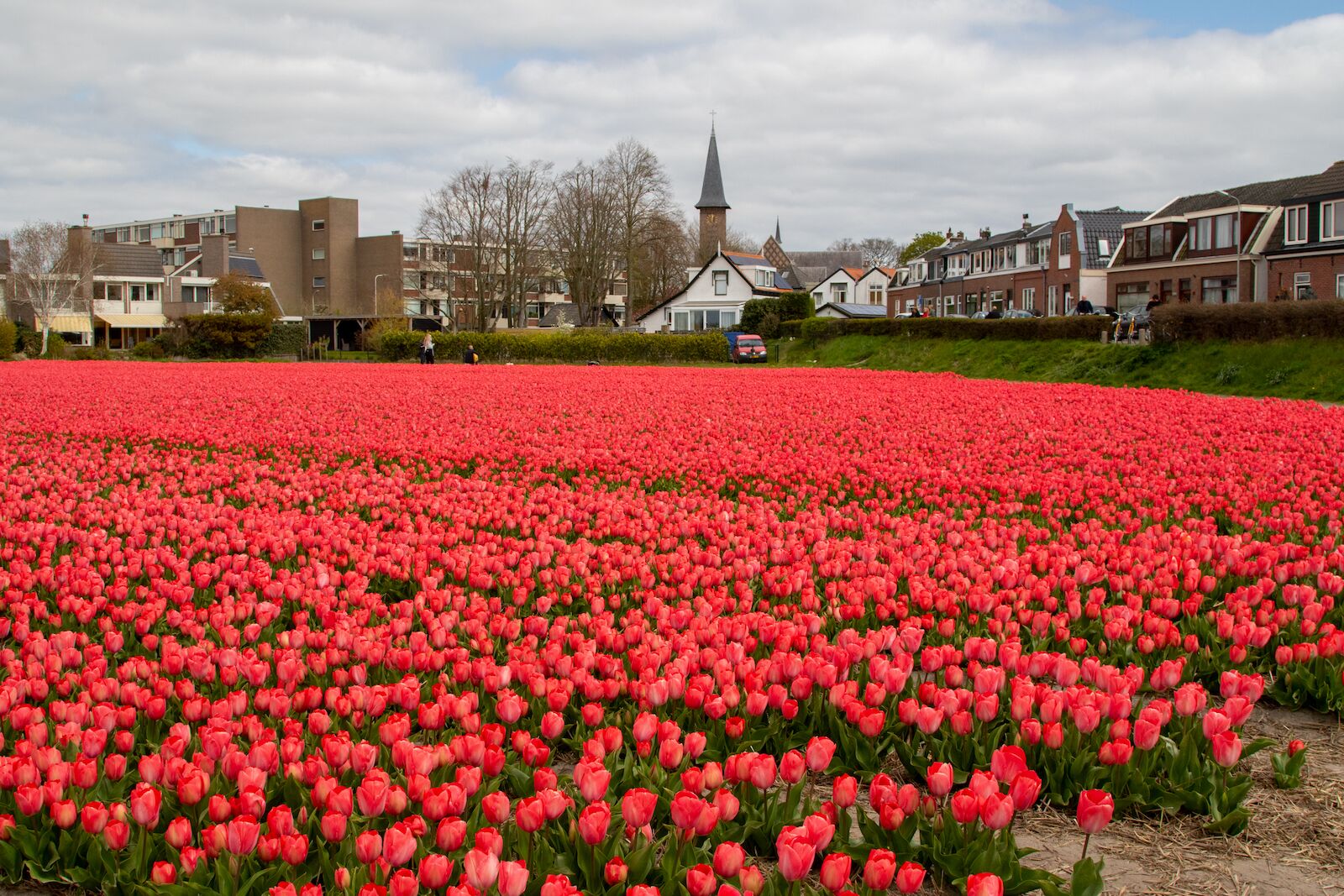 Hillegom, about a 45 minute drive or train from Amsterdam, is where you’ll find Annemieke’s Picking Garden. Here, you can pick some flowers of your own from the greenhouse any pay by the flower. Think of it like the spring version of one of those pick-your-own apple experiences.

De Bollenburcht near Lisse (about 40 minutes from Amsterdam) also allows visitors to pick their own tulips in April and May from a selection of 100 varieties.

Spirits + CocktailsAmsterdam’s Beer and a Shot Is Way Better Than the One at Your Local Dive
Tagged
Festivals Amsterdam, Netherlands
What did you think of this story?
Meh
Good
Awesome