The beer and a shot, also known as a boilermaker, is a classic dive bar order in bars around the US. It’s straight and to the point: one part beer (usually cheap lager) and one part spirit (usually whiskey, but the options are endless). It’s such a natural combination that it’d be hard to say someone “invented” it. It’s more than likely the combo just came about naturally — but there’s a good chance it came about first in the Netherlands.

The bar De Drie Fleschjes (“The Three Little Bottles”) opened in what is now the middle of Amsterdam’s Red Light District in 1650. Times have changed, and so has the surrounding area, but the inside feels ancient with sawdust on the wood floors and barrels of liquor lining the wall opposite the thick wood bar. The drinks passed over that bar are pretty similar to what has always been served: one beer alongside a tulip glass of genever, the signature Dutch spirit. That specific order is why people have been going to De Drie Fleschjes for centuries, and it’s why I was at the bar before lunch on a recent September day.

I’ve had plenty of experiences with boilermakers in the States (though usually not before lunch). It’s my easy, go-to order when a place has questionable draft lines but cheap bottles of both beer and whiskey. But this was my first experience with what the Dutch call a kopstoot, or “headbutt.” The name is like an instruction manual for how to drink it. First, one must get in a position close (but not too close) to the tulip glass on the table. Genever is filled to the top, so much so that the meniscus rises ever so slightly above the lip of the glass. It’s impossible to move without spilling, so you move your body instead. Then, you put your hands behind your back, bend at the waist, and slurp a healthy bit of genever. Once that’s done, you can use your hands to sip back and forth between the beer and the liquor as you please. 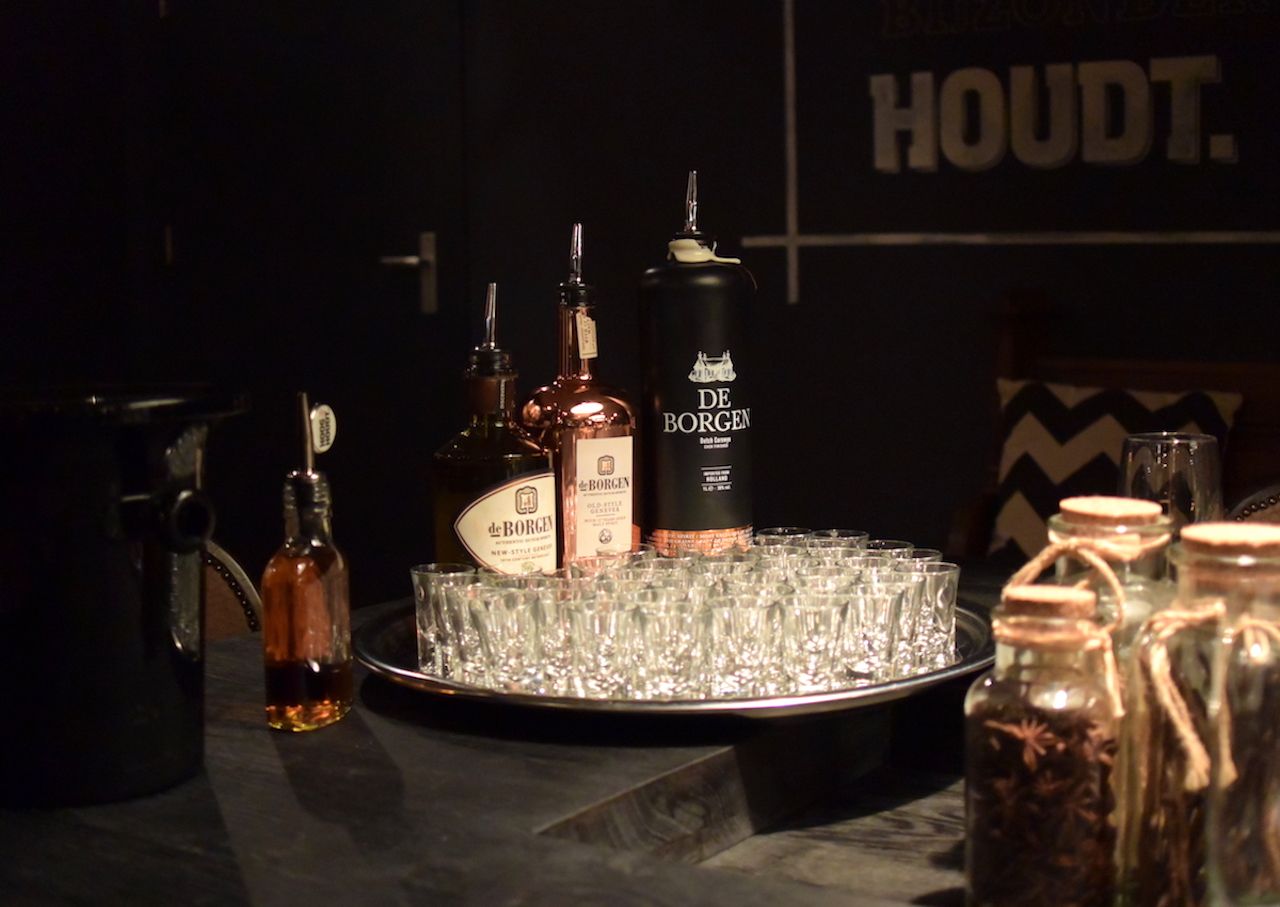 Aside from the theater of drinking, what sets the kopstoot apart from every other beer and a shot is the spirit. Genever (sometimes spelled jenever) is somewhere between a gin and a whiskey. In fact, it’s the precursor to the modern London Dry Gin of today. Genever uses a whiskey-esque base spirit made from grains like barley, rye, wheat, and corn. Juniper and other botanicals are added for flavor. If you think of gin as botanical-flavored vodka, genever is like a botanical-flavored light whiskey. Unlike gin or whiskey, though, genever is traditionally between 30 and 35 percent ABV so that it can be drunk straight.

Genever dates back to the 1500s when it was made as a medicinal product. Alcohol was a cure-all liquid back in the day, kind of like aspirin, Nyquil, morphine, Pepto, and Viagra all mixed into one. Then, in 1606, the Dutch instituted the first tax on genever, signifying its transition from medicine to recreational beverage. De Drie Fleschjes popped up not long after. Who knows when the kopstoot came about, but it probably happened the first time a drinker saw that they could order a beer and a shot at the same time.

There’s an easy argument to be made here that the kopstoot is the mother of all beer-and-a-shot-drinking traditions. Of course, proving the “oldest” of anything involving alcohol and centuries of alcohol-fueled stories is a drunken fool’s task. But the kopstoot is deeply ingrained in Dutch culture and has been around longer than anyone can remember. It’s also been drunk the same way.

“Do you know why it’s filled to the very top?” Piet van Leijenhorst, the master distiller at BOLS, asks me as he signals for the bartender to line up another kopstoot. “Because we want to make sure we get what we paid for,” he says, ending his sentence with a chuckle and a motion to join him back at the bar.

I haven’t seen any evidence of Dutch frugality other than bar patrons demanding healthy pours of genever, but if this is what being cheap looks like, then I wouldn’t mind some cheapness at American bars. 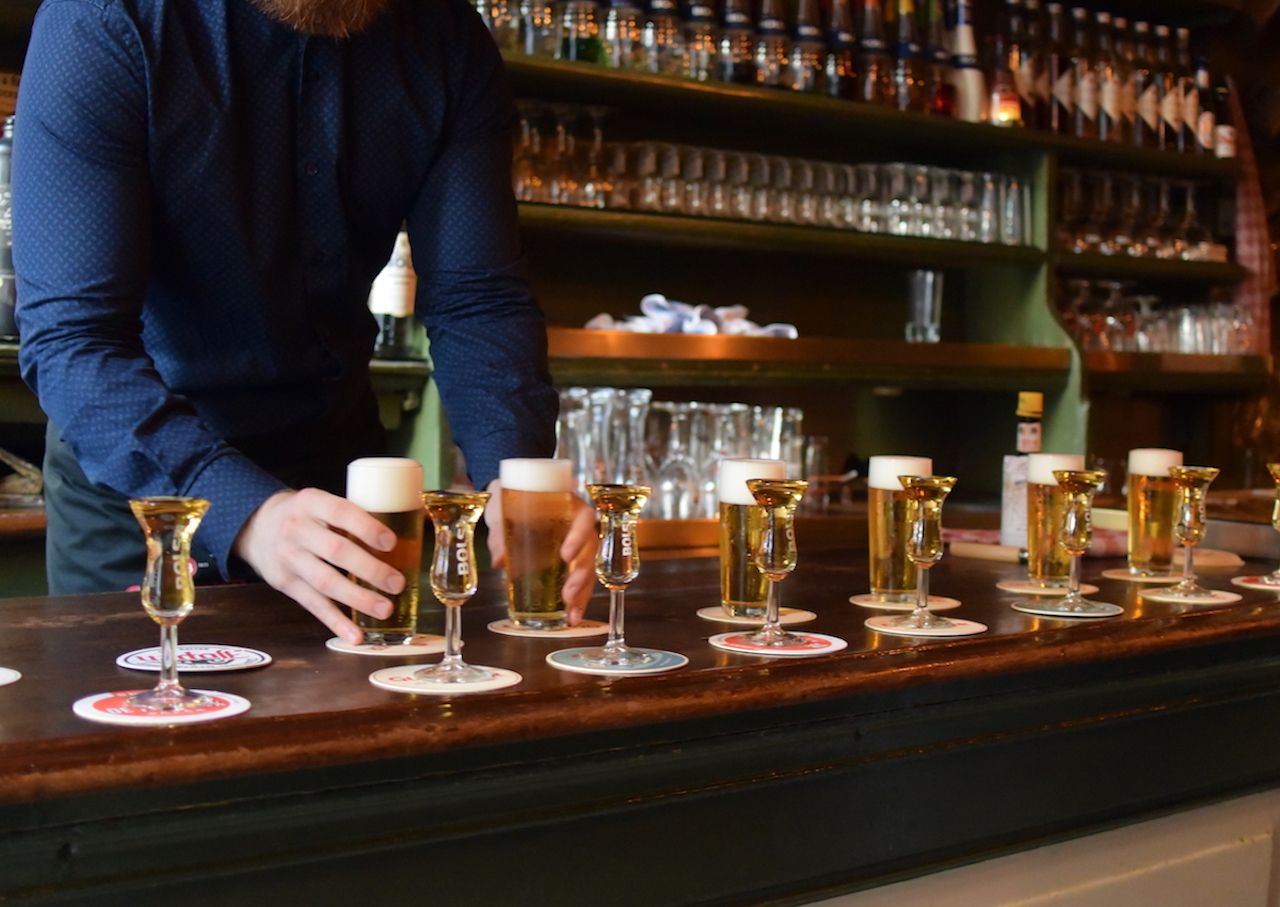 Modern kopstoot-ers are keeping one foot in line with tradition and one moving forward with drinking trends. Heineken, which is based in Amsterdam, and other regional light lagers are the most common beer back options. Amsterdam’s craft beer scene is quickly growing, however, and where there’s beer, there’s a tulip glass of genever to pair it with. Breweries like Brouwerij ’t IJ, Oedipus Brewing, and Brouwerij Troost are making every style of beer imaginable — even ones like the hop-forward New England IPA. De Drie Fleschjes and other bars around the city are pairing the beer styles with the different genever styles from distilleries like BOLS, Rutte, Notaris, and Hooghoudt.

It’s also more common to appreciate what’s in your glass these days, so people are sipping, not shooting, their drinks.

“I like the kopstoot, but I don’t like to do it in one go,” Myriam Hendrickx, the master distiller at Rutte, says. “Call it a sipping kopstoot.”

Whatever you choose to call it, make sure you partake in the tradition without headbutting anything off the table.

Where to drink a kopstoot: 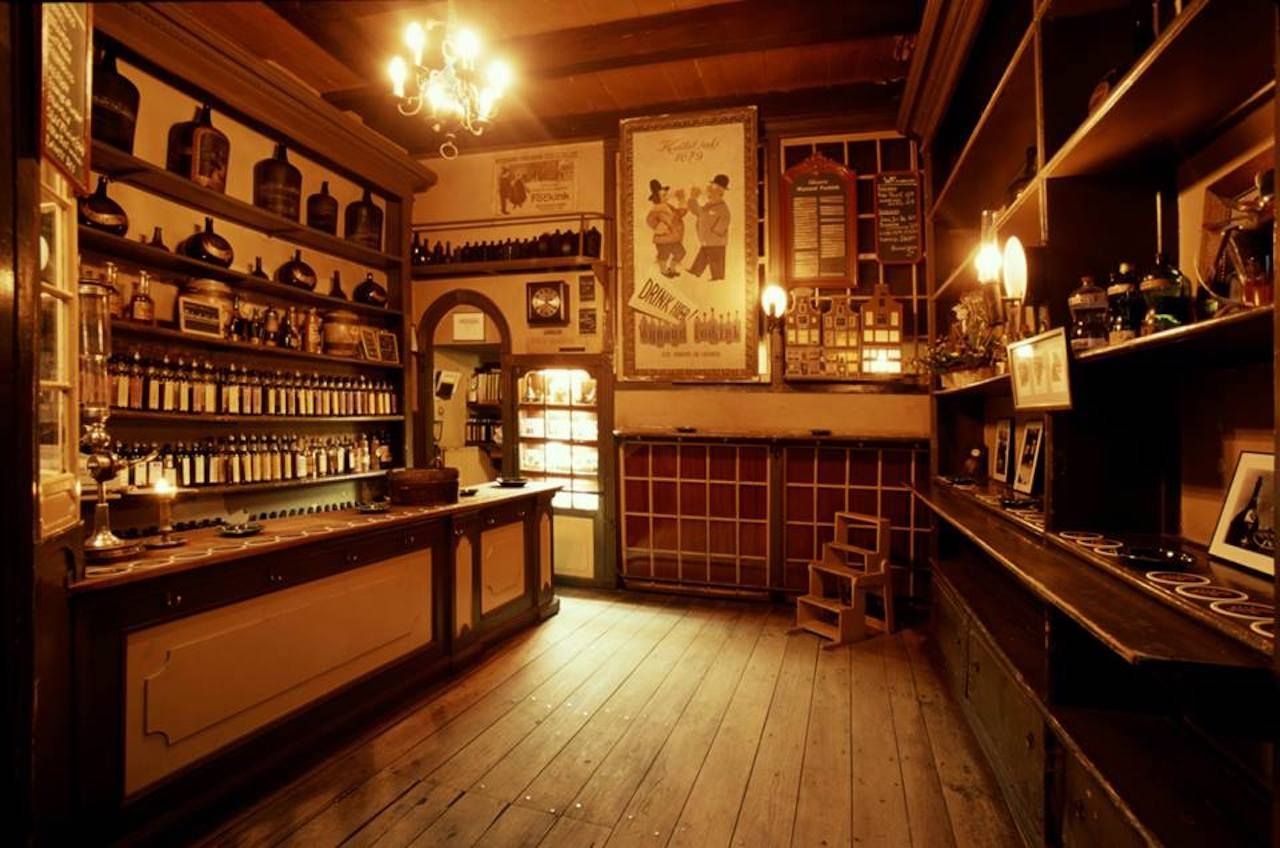 Every respectable bar in Amsterdam will serve you a kopstoot. While other vices get more attention in the city, Amsterdam is indeed a drinking town. That said, some places are better than others.

De Drie Fleschjes: About as old school as you will find in Amsterdam, the bar has a wide range of genever options and plenty of beer options to match. There’s also a vibe here you just can’t get anywhere else, making it an ideal spot to stop by for a quick drink before going about your day in the Red Light District.

Proeflokaal A. van Wees: The small bar was once a distillery and still sources genever made in Amsterdam. There are more than 17 authentic genevers to choose from alongside traditional beer pairings.

Wynand Fockink Proeflokaal: A genever tasting room and liquor store located in a tight alley near the Dam square, this bar started as a distillery in 1679 with a tasting room. It now has loads of different genevers to taste (including its own brand) in a range of styles.

TravelEverything tourists miss when they come to Amsterdam
Tagged
Food + Drink Spirits + Cocktails Beer Amsterdam, Netherlands
What did you think of this story?
Meh
Good
Awesome

New Jersey sandwiches are an art form. These are the 9 sandwiches to try.
Ozarks cuisine is a blend of the best of Midwest and Southern food
Searching for the best Mexican food in Texas? You need to visit El Paso
Amtrak food and drink options: Everything you need to know before your next train trip
The difference between butter chicken and chicken tikka masala

Where to eat and drink at Amsterdam’s Schiphol International Airport