It only takes a short walk in the heart of Amsterdam’s red-light district to check the city’s most famous idiosyncrasies off your list. There’s Casa Rosso, the sex theater that has become one of the city’s main tourist attractions, and the Hash, Marijuana, and Hemp Museum a little further north. Across the canal via Oudekennissteeg bridge, mostly ignored by the crowds distracted by the neon-lit windows on Oudezijds Voorburgwal, there’s also the Oude Kerk, a 13th-century Calvinist church surrounded by bars, pubs, and coffee shops.

And in the middle of the sex shows, booze, and weed, the clichés that define this part of the world nowadays, there is also the Netherlands’ most iconic symbol, hiding in plain sight.

Just above the highest set of windows of the building at Oudezijds Voorburgwal 59, a message in capital letters reads “Al Nut Al Nyet,” i.e. “Greed brings grief.” Separated in the middle by a huge metal tulip hanging flat on the wall, the four words loom high above the crowds of tourists. 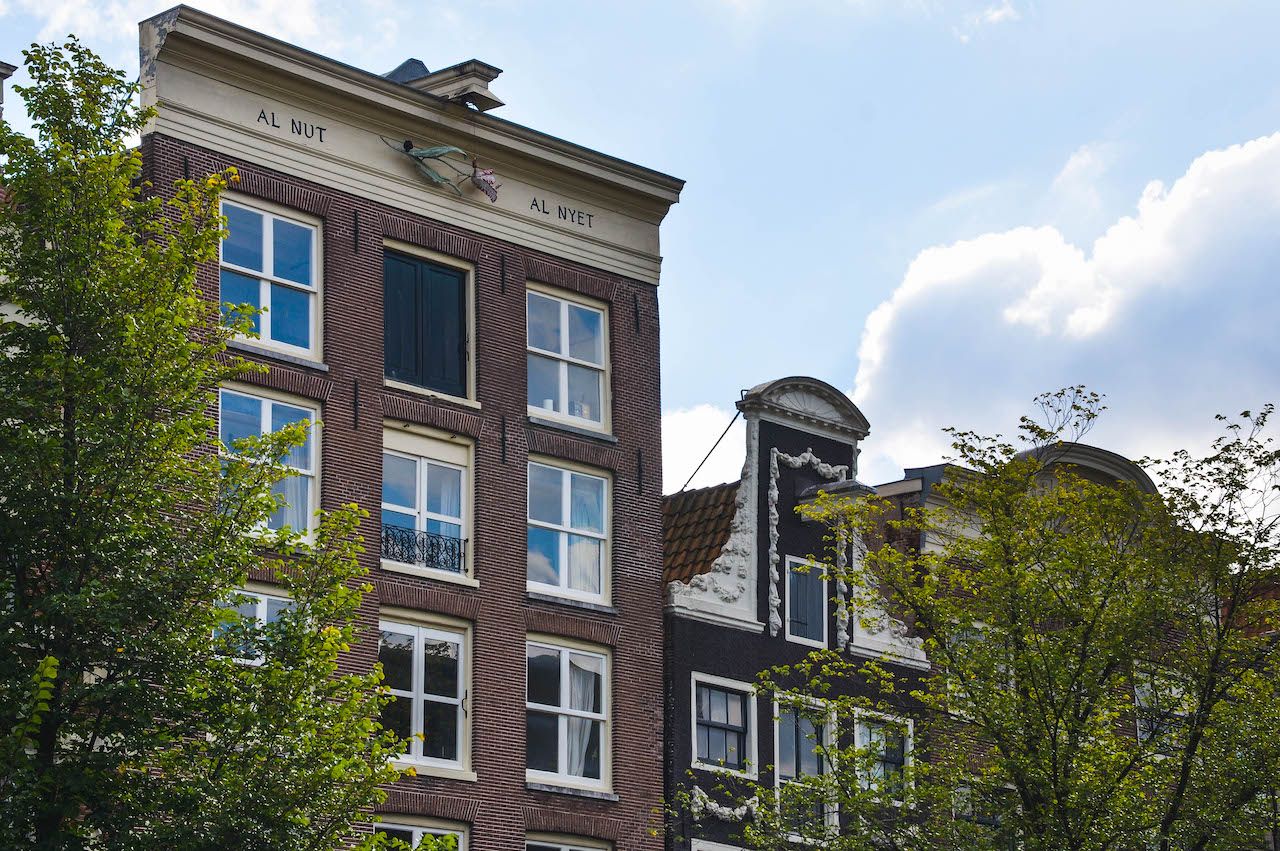 The most famous plant in the Netherlands isn’t marijuana, but the tulip. Tulips, however, are not native to the Netherlands. Originally from Central Asia and cultivated in Turkey as early as 1055, the flower was first introduced to the Netherlands thanks to botanist Carolus Clusius and the bulbs he brought back from the Silk Road to his garden in Leiden in 1593. The popularity of the tulips became especially strong among the wealthiest, who used them to decorate their homes, and Flemish artists such as Jan Brueghel the Elder, who represented the flowers in their paintings.

With the noble class developing a taste for the flower and pre-Internet influencers making it culturally relevant through their art, the tulip quickly became in high demand among the newly-rich population of the Netherlands. Owning and showing them off on window sills was a sign of success and abundance.

But the flower did not become a symbol of the Netherlands because of its beauty, but rather, because it became part of a risky (and attractive) stratagem to make a quick buck: “tulip mania.”

Merchants, understanding that demand for the exotic flowers was high and the supply low, saw an opportunity to make a whole lot of money. They bought the tulips in winter at a low price when the bulbs were dormant with the plan to sell them for much more come summer. They created future contracts that gave the bearers the rights to the bulbs when blooming began. Speculators bought and sold future contracts without ever even seeing an actual flower and a single contract would be exchanged multiple times a day.

The bubble burst in winter 1637 when a number of buyers did not follow through on their agreement to purchase the bulbs at a high price. Many traders lost fortunes overnight, however, the tulip mania did not cause true economic disruption, since only a small group of speculators were heavily affected by the collapse of the market. Nevertheless, the desire to get rich quickly by earning money out of non-existent flowers did become exemplary of the risks of the free market. And the Dutch Calvinists jumped on the occasion to teach the masses that indeed, “Greed brings grief.” 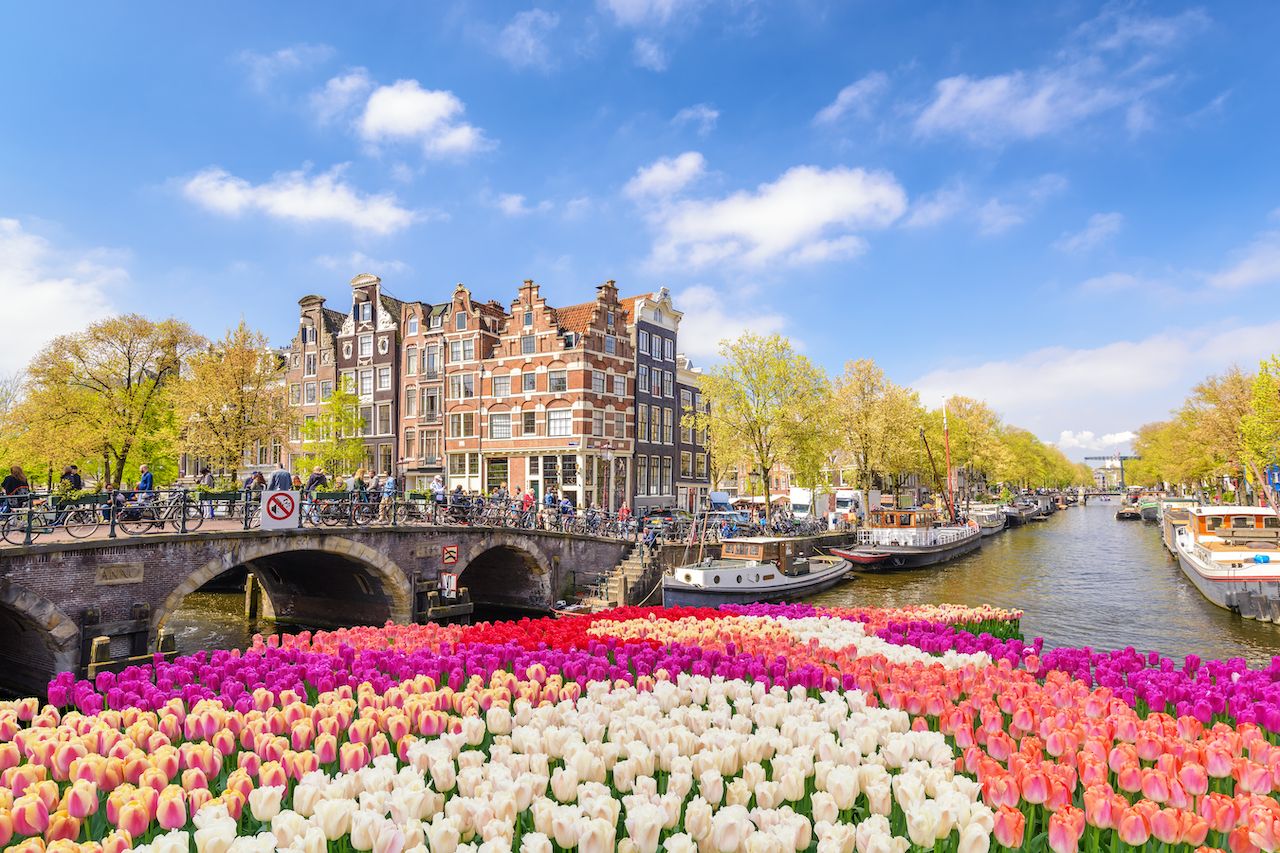 Almost 400 years later, economic and religious lessons may have been learned, but Dutch people still go nuts for the tulips. National Tulip Day, celebrated every year on the third Saturday of January in Amsterdam, launches tulip season with a temporary garden made of 200,000 tulips on Dam Square. For another taste of the Dutch tulip obsession, check out the gorgeous and busy Keukenhof Gardens from late March to mid-May. And, of course, a trip to the Amsterdam Tulip Museum (where you’ll learn that the Dutch ate tulip bulbs out of necessity during World War II) makes it clear that these blooms are one of the most important parts of culture in the Netherlands.

TravelEverything Tourists Miss When They Come To Amsterdam
Tagged
Culture Netherlands Amsterdam, Netherlands
What did you think of this story?
Meh
Good
Awesome

The 20 Happiest Countries in the World, 2022
3 International Psychedelic Retreats Poised To Take Wellness Travel Into the Future
Escape Amsterdam for the Perfect Psychedelic Truffles Trip in the Dutch Countryside