We hope you love the pllaces we recommend! Just so you know, Matador may collect a small commission from the links on this page if you decide to book a stay.

Among the pastures and strip malls of Lancaster, Pennsylvania, sits an oasis for fun-loving kids and quirky adults — the Cartoon Network Hotel. Along Lincoln Highway East, an area that’s gray and a little gloomy in the colder months, this hotel sets itself apart with glowing magenta lights and Adventure Time’s Jake stretched over the entrance. You get the immediate feeling, before even stepping inside, that staying here is an experience. 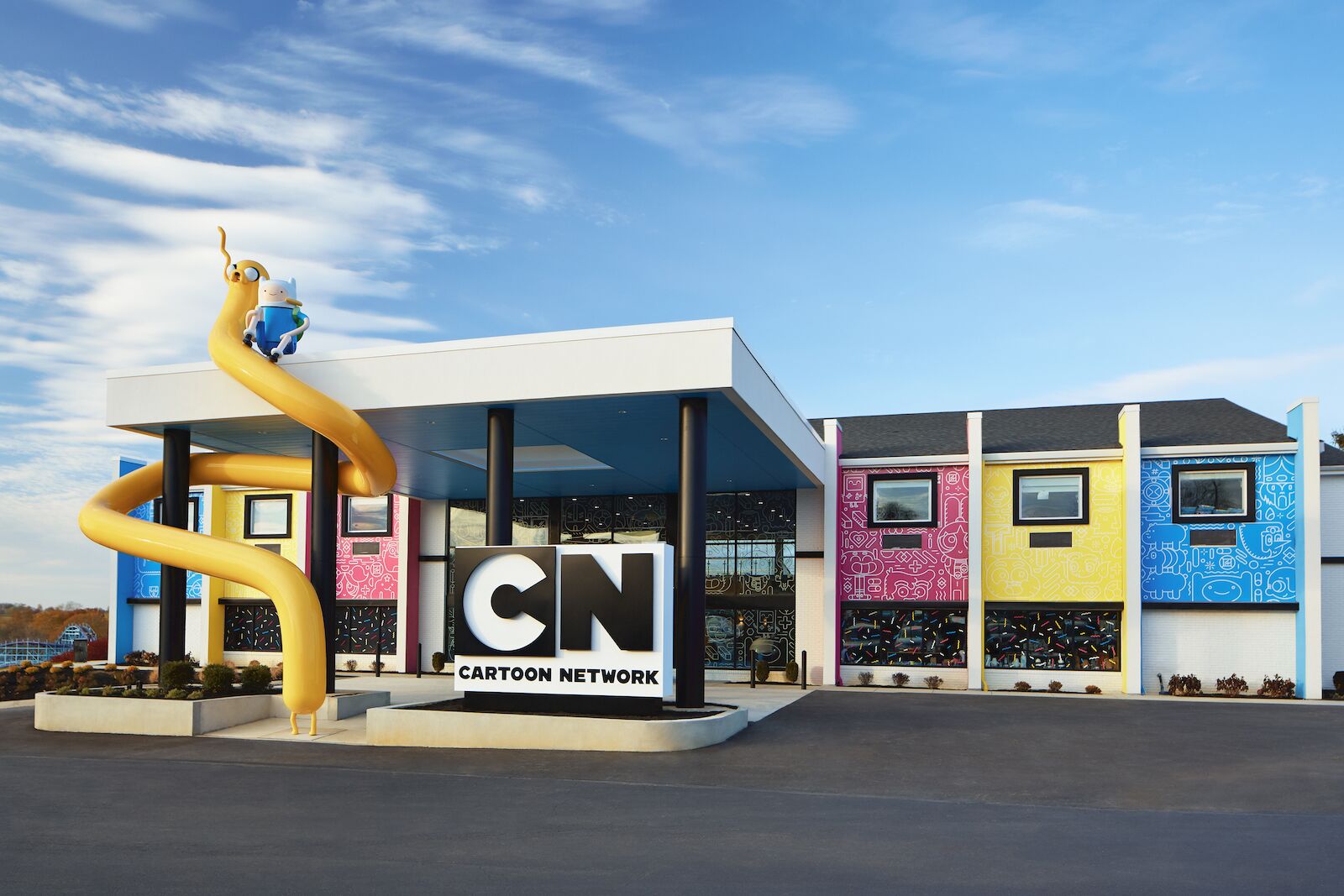 Before I go any further, I think it’s worth it to explain that I mostly consider family getaways like this to be fun for kids only. I don’t expect peace, quiet, decent prices, or any real enjoyment for myself beyond watching my kids have a good time. Perhaps I’ve been jaded by our trips to Disney parks. Plus, with two elementary-school age kids and a teenager, it is extremely rare that every member of our family will experience the same level of fun. The Cartoon Network Hotel was the exception.

We arrived on a cold Friday evening after a three-hour drive from north New Jersey. Upon unloading the trunk, I was prepared to drop our duffel bags and curl up under the covers. But, I quickly realized that wasn’t going to happen. Each member of my family, myself included, contributed to a soft symphony of oohs and aahs upon stepping into the striking open lobby. We were immersed in bright colors depicting Cartoon Network’s cast of eccentric characters. The building was so bewitchingly gorgeous, I didn’t even mind that Pitbull was pumping from the speakers. 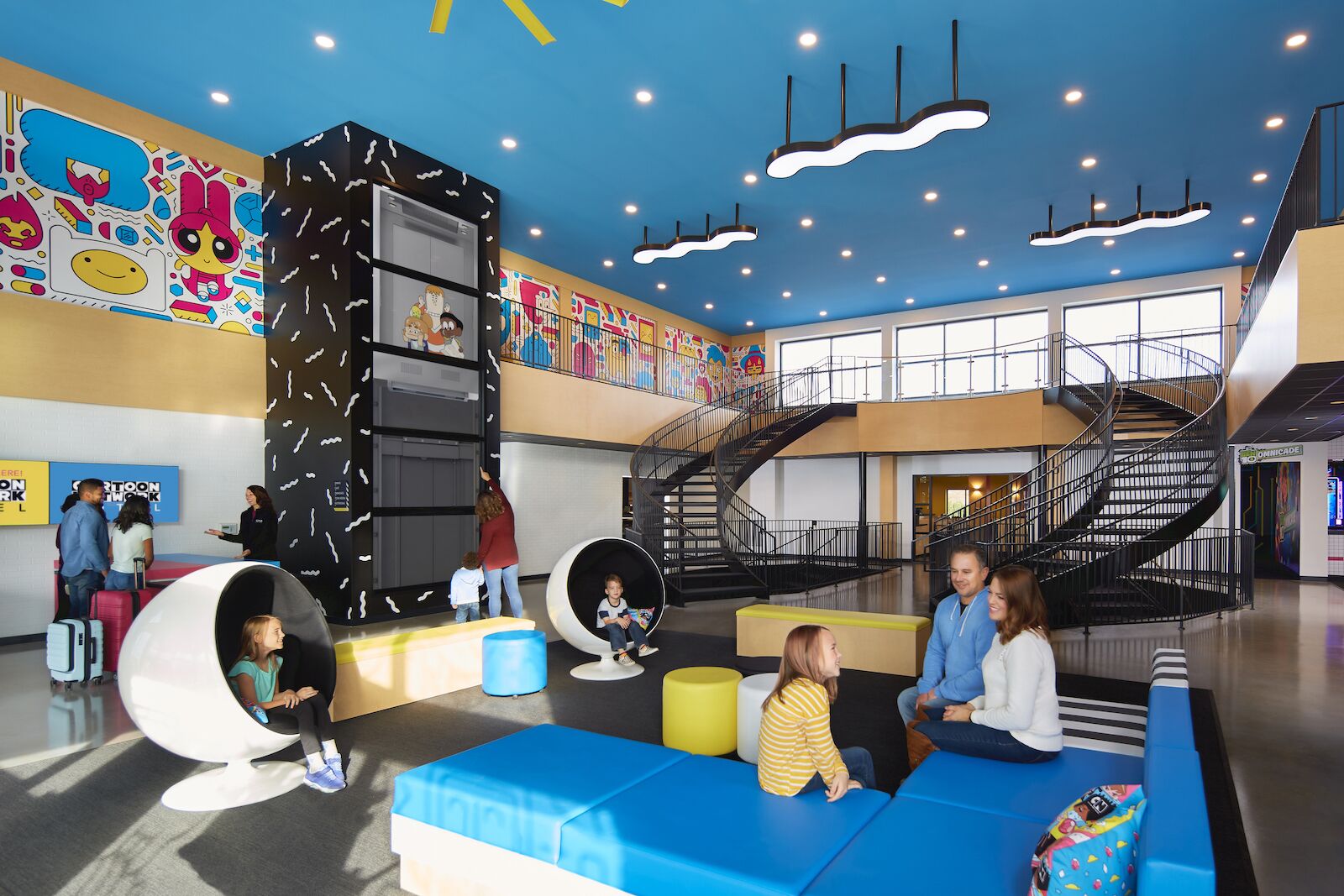 The Toon Room, an activity space to the right of the lobby immediately lured my little ones in. My teen approached with caution, either assuming the activities were meant for younger kids or just trying to maintain a cool, adolescent composition. The cozy space included several activities — a color-your-own character area where designs could be animated and projected on a large overhead screen, four Powerpuff Yourself stations, a toe-tapping floor tile game, and a Summer Island themed virtual tag wall. A few minutes in, my teen was designing her own Powerpuff Girl. 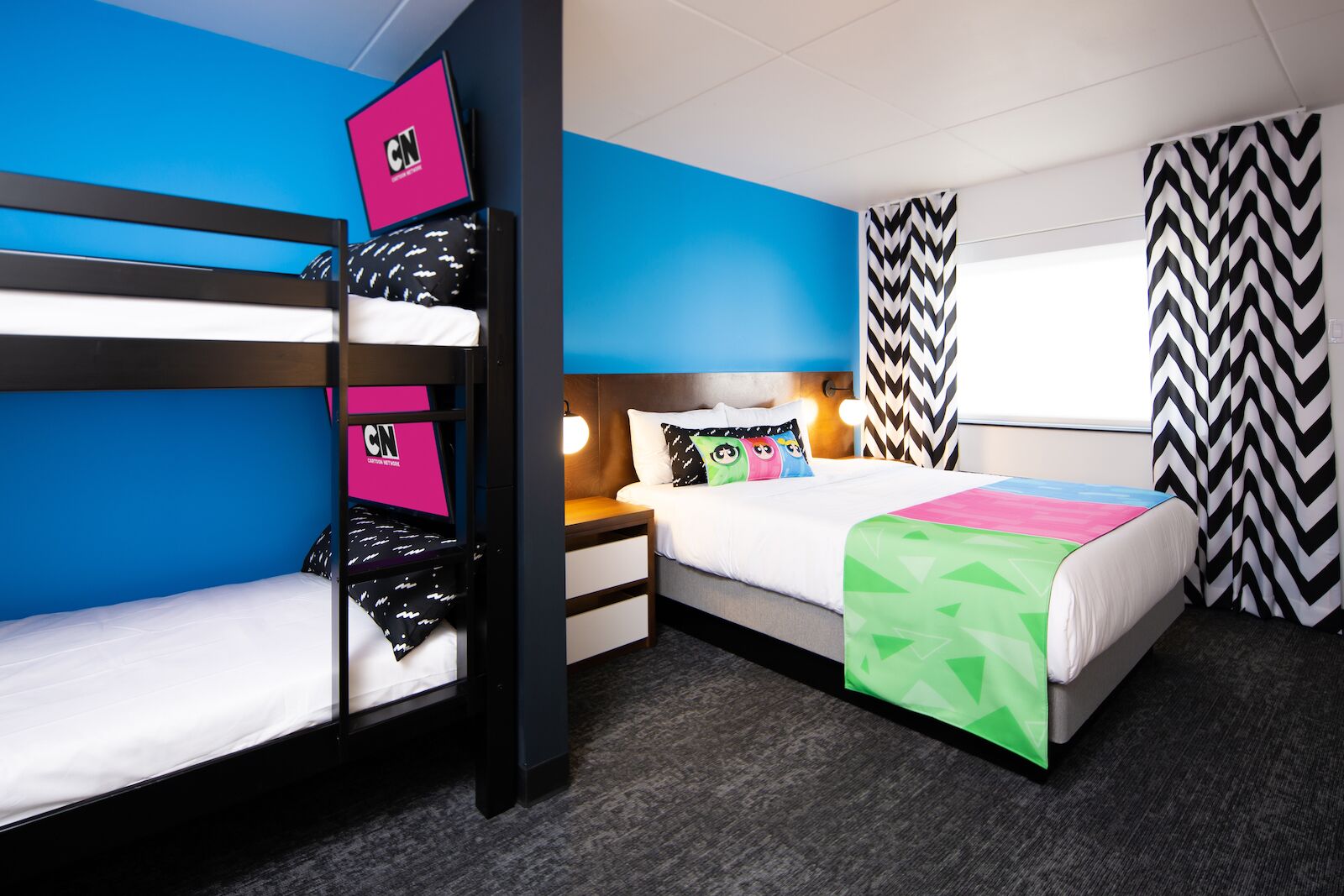 After the initial excitement, my husband and I were finally able to peel the kids away from their fun to find our room and settle in. We stayed in the Ben10 dream suite, one of the four Dream Suites, which was a quick jaunt up the curved steps of the lobby. The suite had a large living area, a kids’ room with double bunks, a separate room with double beds, a kitchenette and dining area, and two full bathrooms. The space was unexpectedly ample, stylish, and clean. The kids were especially ecstatic about the televisions at the foot of each bunk. We ate dinner at the Cartoon Kitchen, which included affordable entrees and tasty gluten-free options. Then, we explored the Ben10 Omnicade AKA the small, L-shaped arcade off of the lobby that also features two VR cubes. It’s no Dave & Buster’s — only a handful of kids filled the space pretty quickly, but of course, that didn’t bother any of the children, who were too hypnotized by the lights and games. 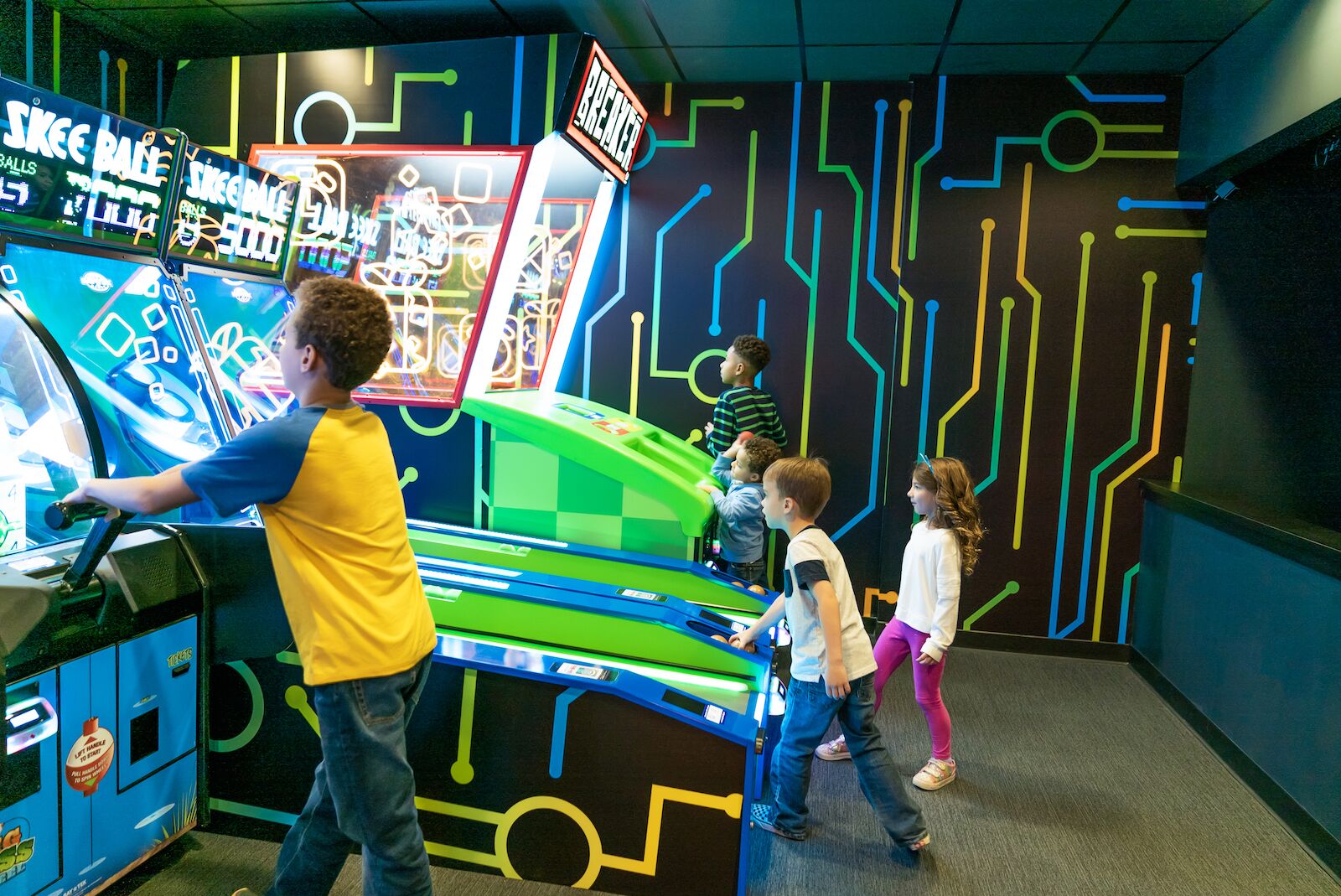 The next day we were able to view the immersively designed property in full daylight. My teen and I were entranced by the numerous framed cartoon sketches that covered the walls of the lobby. From the windows, the loops of the Dutch Wonderland roller coasters felt close enough to touch. It was closed for the season during our stay, but opens for the 2022 spring preview (weekends only) on April 16th. Hershey Park, which is about 40 minutes away, was also closed, but opened for their spring preview (also, weekends only) on April 2nd. Note that these parks are open seven days a week starting in June. Surprisingly, my kids weren’t phased by the closed attractions because they were too enthralled by everything else the Cartoon Network Hotel had to offer.

That cold Saturday, we munched on breakfast bites and delicious coffee from the Bearista Café before heading to the Turkey Hill Experience, about 15 minutes away, where we made our own ice cream flavors. It was an enjoyable, although expensive activity ($96 for our family of five), and still we were all more interested in getting back to the hotel.

Back at the Cartoon Network Hotel, the kids painted their own character-themed tote bags in the Toon Room. The attendees were eager to welcome and help the kids with their crafts, despite the overwhelming flurry of children hailing from the property’s 155 standard rooms waiting on supplies and asking questions.

Of course, a stay at the Cartoon Network Hotel wouldn’t be complete without a trip to the pool. Since warm spring temperatures had not yet settled in yet, the Powerpuff Girl “Splashville” Splash Pad, the outdoor pool, and the Land of P’oool concession stand were closed. But, the indoor pool, encased in a mostly glass building toward the back of the property, was heated. Perhaps, the only drawback was the indoor pool’s exterior entry, which meant bearing with the 30-degree temperature in order to get back to the room—a two minute sprint. As many parents may have expected, the kids got a kick out of this, too. 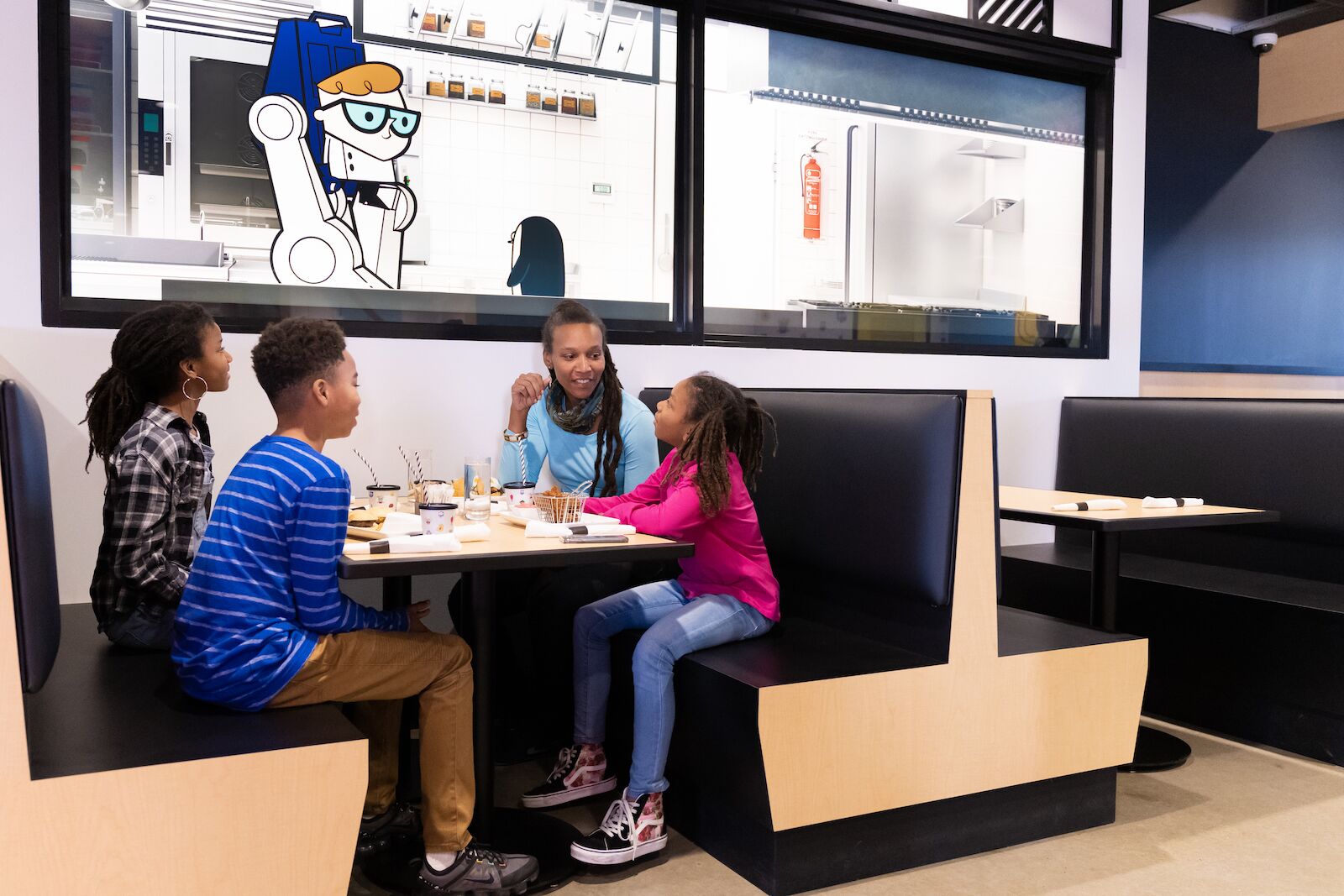 That evening we dined on seriously delicious BBQ takeout from Smokehouse BBQ and Brews while hanging out in the suite and recovering from the day’s activities. In our pajamas, we took another quick trip downstairs to the Omnicade. Along the way, I noticed separate crews of adults without children enjoying cocktails at the Bearista Café. Some were casually celebrating a birthday, others cosplayed Adventure Time characters. Had the Land of P’oool concession stand been open, there likely would’ve been solo adults there enjoying the frozen libations as well. Even with no children in tow, the Cartoon Network Hotel is an entertaining, aesthetically pleasing spot for adults.

All in all, the Cartoon Network Hotel is an unexpected, shining star in Lancaster. Looking at the surrounding hotels, I wouldn’t stay anywhere else. It truly offers trendy, comfortable accommodations and activities for kids and adults. We’re already planning our return in the summer months.

TravelYour Next Family Trip Will Be a Breeze With These Packing Tips for Traveling With Kids
Tagged
Family Travel Epic Stays
What did you think of this story?
Meh
Good
Awesome

This Adults-Only, All-Inclusive Resort in the Dominican Republic Is the Epitome of Luxurious Wellness
These Stunning Cabins Are the Ultimate Zion National Park Basecamps
This Vegas Resort Is the Ultimate Adult Playground for Sports Lovers
13 of the Best Adults-Only All-Inclusive Caribbean Resorts
8 of the Coolest Airbnbs Near Disney World, Orlando