There are plenty of iconic places to drink bourbon in Kentucky. But there’s one experience that might just top them all: drinking whiskey on the castle grounds designed by the man known as the Father of the Modern Bourbon Industry.

Castle & Key Distillery is a working distillery that produces gin, vodka, rye whiskey, and, most importantly, bourbon. It also doubles as one of the best places to drink any of the above spirits in the state, thanks to the limestone castle and surrounding bar, sunken garden, and botanical trail.

It was originally built by Kentucky-born Colonel Edmund Haynes Taylor, Jr. (better known as Colonel E. H. Taylor). Taylor, who also served as the major of Frankfort, Kentucky, used his own private rail car to bring in guests from New York, Chicago, and New Orleans. When politicians and business leaders wanted to highlight Kentucky, they would turn to Taylor and others like him, and use distilleries to showcase the economy-powering activities going on in the state. Today, anyone visiting Kentucky who is looking to sip a cocktail on distillery grounds can experience the same level of luxury. 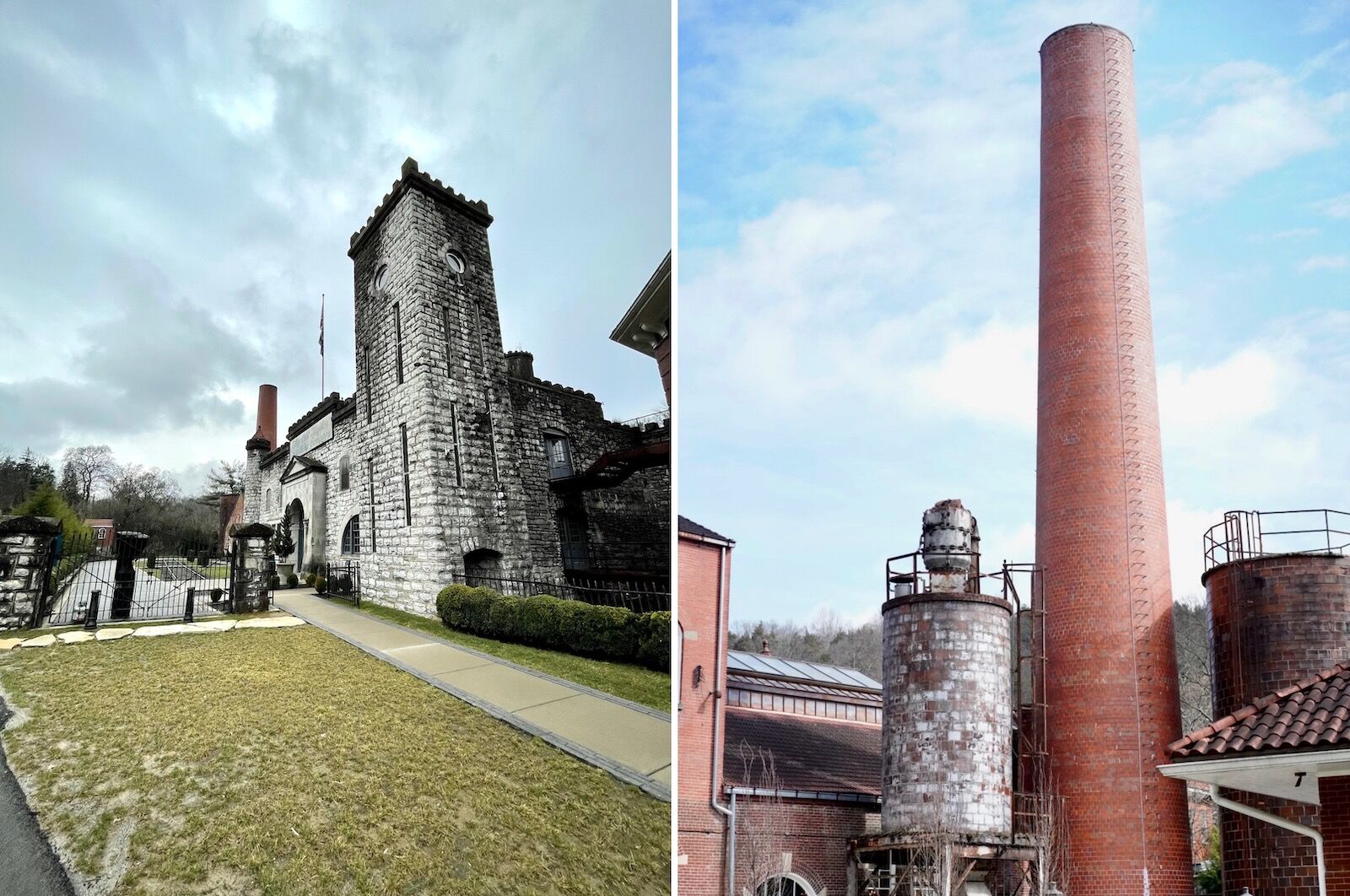 Castle & Key is on Kentucky’s Craft Tour Trail along with 22 other distilleries. The more famous Kentucky Bourbon Trail includes the biggest names in the spirits industry. The latter sees more than 1.5 million visitors, while the Craft Tour gets about 600,000 visitors every year, according to an industry report. Yet while the Kentucky Bourbon Trail is seeing fewer people than in the past (down 13 percent compared to 2019’s pre-pandemic number), the Craft Tour Trail had a record year in 2021 with 40 percent more visitors than the record set in 2019.

“We approached this with an ‘if you build they will come,’ perspective,” Brett Connors, brand ambassador and head blender, says. And they have: 65,000 people came last year despite COVID restrictions, and Connors says he wouldn’t be surprised if the guest numbers topped six figures this year.

Castle & Key’s transformation into the go-to destination to sip whiskey in Kentucky goes back to E. H. Taylor’s original vision of the castle and distillery serving as a tourism center where people could learn about the region and the spirit.

“Colonel Taylor’s goal was ‘hey, come see us and get to know us,’” says Will Arvin, the owner of Castle & Key and the man largely responsible for bringing the grounds back to life. “And that’s ours too.” 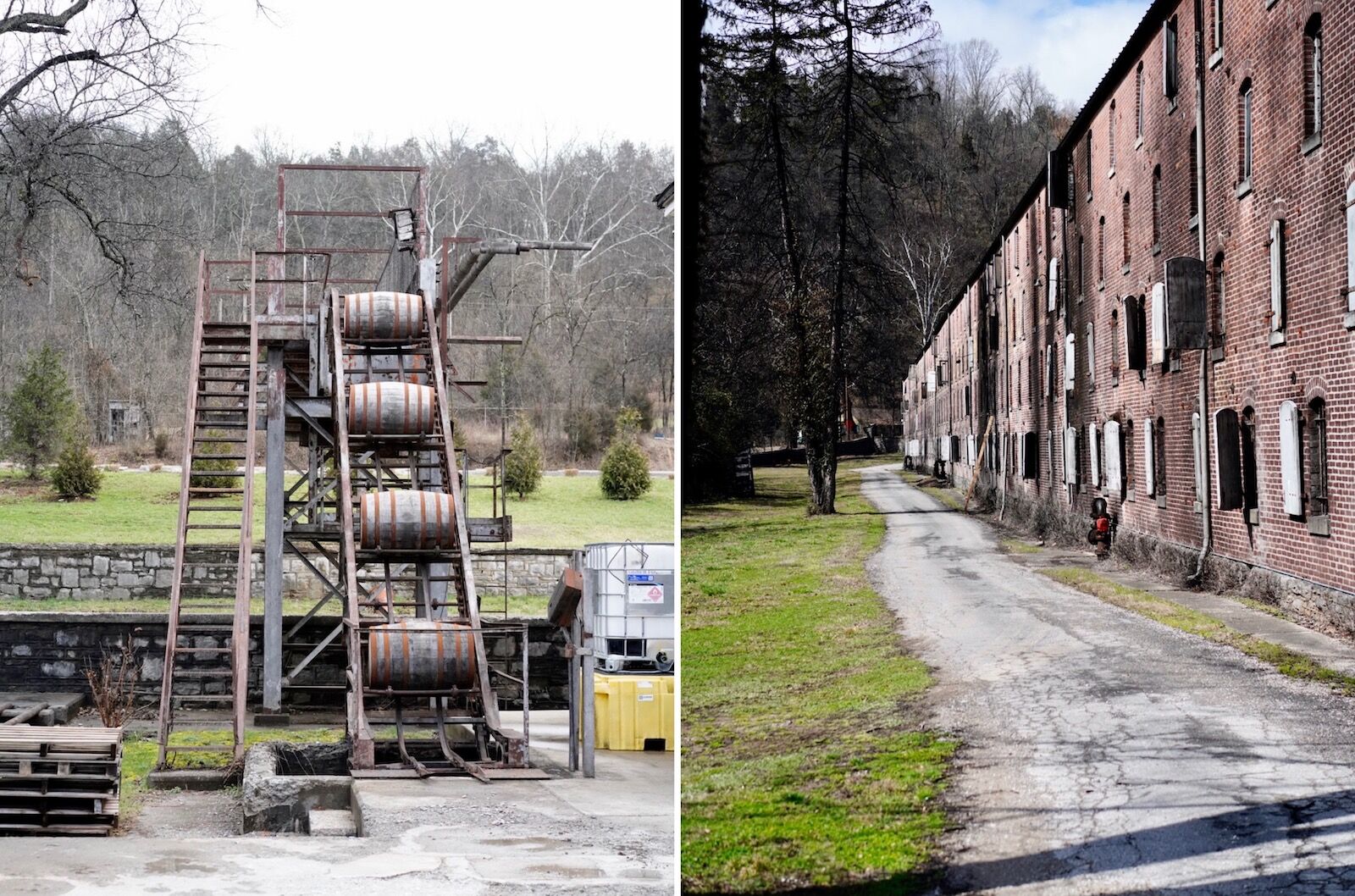 The Castle & Key team decided to highlight, rather than remove, any old structures or equipment that wasn’t harmful or dangerous. The old ash collector, for example, is now part of the HVAC system, and a massive mash evaporation tank sits behind the tasting room bar. As Arvin put it on a recent trip, “If it’s not in the way, it can stay.”

“The history is a lot of what draws our team and guests to the site,” Connors explains.

In addition to being a lead blender for Castle & Key, Connors has an almost encyclopedic knowledge of Colonel Taylor’s history. 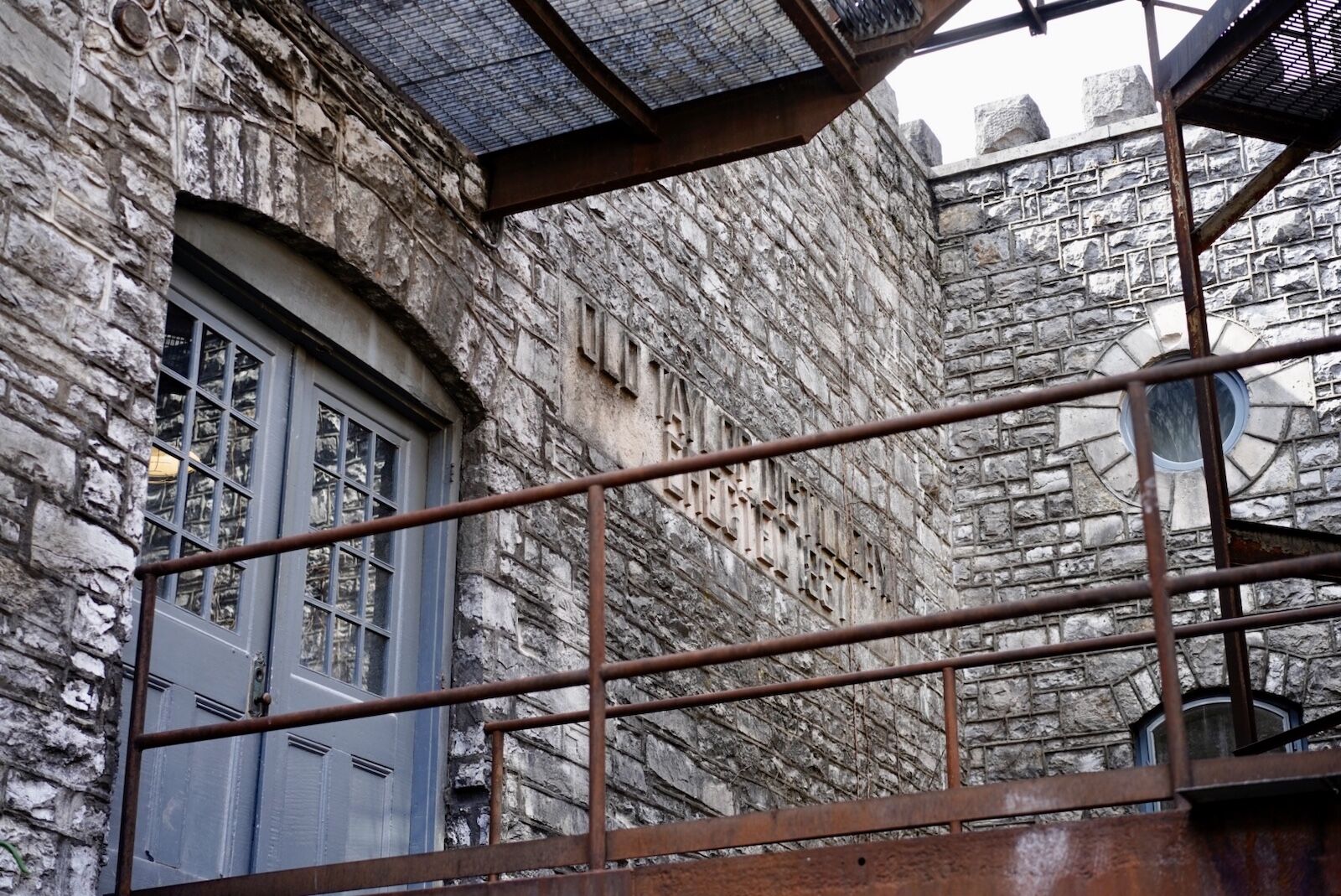 In 1869, Taylor went to Europe, where he learned modern distillation techniques and fell in love with the architecture. He also saw how German brewers were capitalizing on welcoming people to the brewery. It’s impossible to know for sure, but Connors thinks this may have been a big influence on Taylor’s perspective on alcohol and hospitality.

Previously, American whiskey was primarily a value added product for farmers and lacked the flavors bourbon drinkers seek out today. Taylor changed that — he made it a point to bring people to Kentucky to taste whiskey and get the full experience of the region he also governed.

Politics and Kentucky promotion played a big role in Taylor’s life. The nephew of President Zachary Taylor, he served as the mayor of Frankfort from 1871 to 1887. He wrote magazine stories advocating for bourbon. In 1897, he used his influence to help pass the Bottled-in-Bond Act that regulates how whiskey is aged and bottled to this day (conveniently, he owned much of the whiskey that qualified at the time the new legislation went into effect).

Taylor’s first foray into distillery ownership was the O.F.C. whiskey brand in 1870. His lavish spending on things like electricity and furs for his wife incurred debt, however, and people came to collect. In 1878, Taylor sold the distillery to George Stagg to pay off his debts, but stayed on at the renamed George T. Stagg Distillery to help with growth and marketing.

“He had Rasputin-level charm,” Connors says.

It didn’t take long before Taylor got another shot at distillery ownership in Millville, Kentucky. Taylor built a limestone castle fashioned after those in Europe in 1887. He spared no expense on the classical springhouse and a sunken garden for entertaining. Taylor even built his own private rail line to drop guests at a train depot right next to the castle. Most importantly, of course, he also made and aged the bourbon that people were taking the train to come and taste. It was the start of bourbon tourism — and he was more than 130 years ahead of the trend. 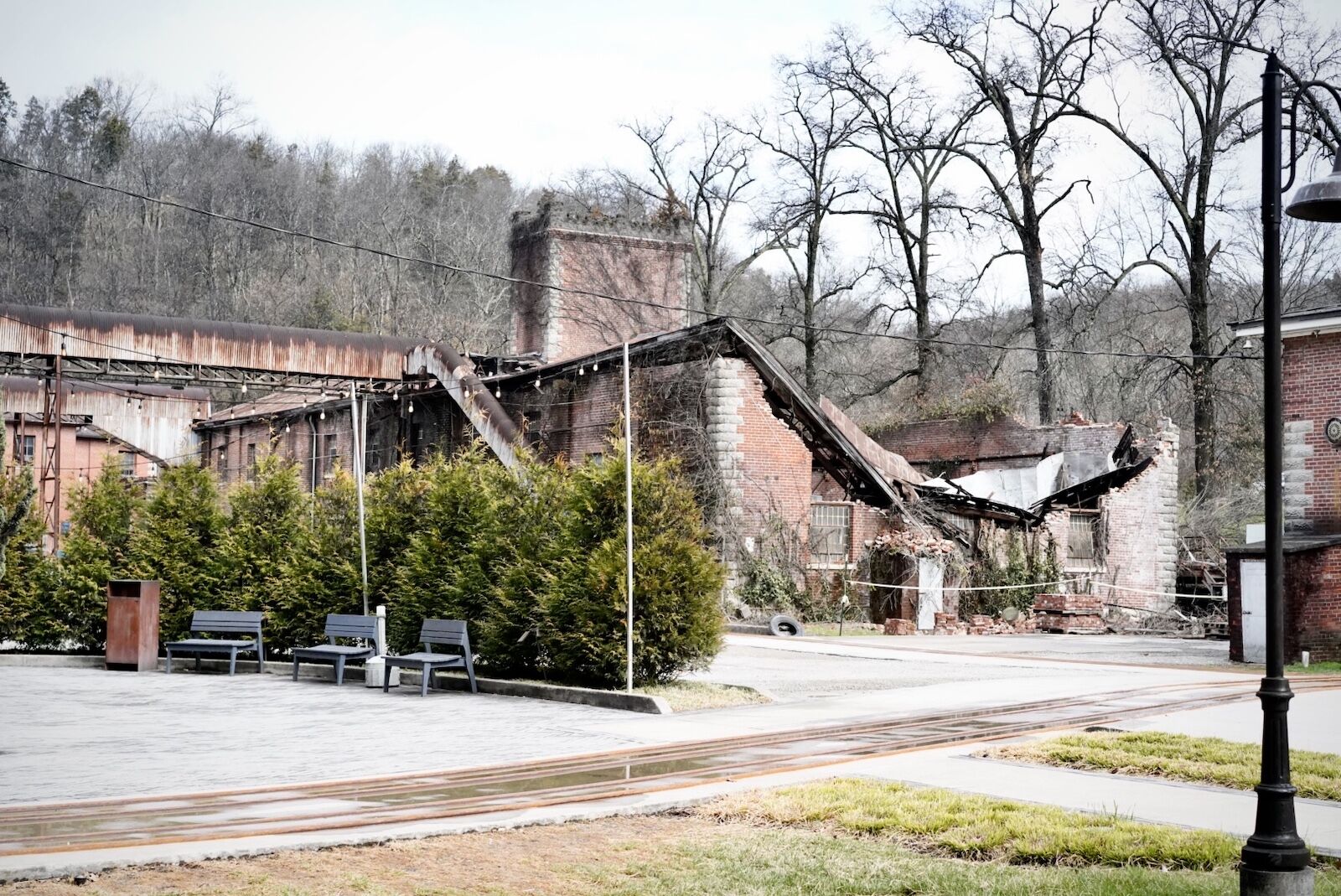 His legacy was revived when the conglomerate National Distillers bought the property in 1933. It became more of a place for distilling whiskey and storing barrels than for hosting guests under the new ownership. Yet as clear spirits took over in America in the 60s and 70s, National Distillers stopped distilling on-site in 1972 and ended the aging and bottling programs in 1987.

The castle hit its roughest years in the 90s and early 2000s, and the grounds were essentially abandoned. It was during that time that an architectural salvage company took copper, brass, and brick from the site.

Despite the state of the formerly grand distillery, Arvin and his business partners saw an opportunity.

The site cost about $950,000 in 2014, according to the AP. But that was just the start of a movement to breathe new life into Taylor’s whiskey castle.

A Kentucky drinking experience that Colonel Taylor would have approved of 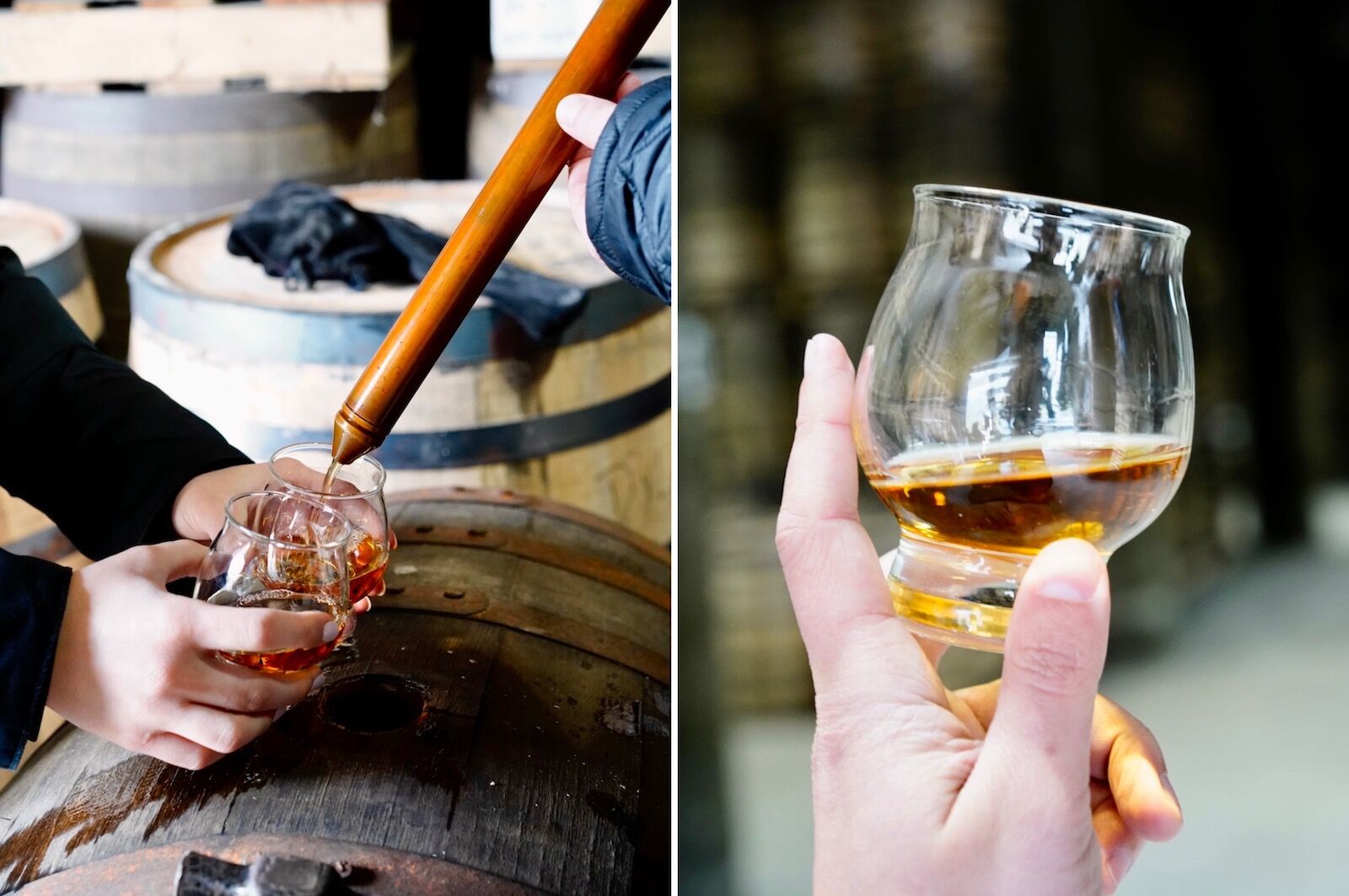 Walking toward the barrel warehouse toward the back of the property, Arvin points to a flat patch with stone garden beds. The spot used to be used for aging whiskey, but was in too bad of shape to repair and it looked at first like the entire building would have to be scrapped. Instead, the team kept the foundation blocks to outline plots for rosemary, lemon verbena, and other plants that go well in cocktails.

The transformation was made in a relatively short time and now the garden helps make the drinks from Castle & Key’s cocktail bar even more special with seasonal, freshly picked ingredients. Examples of this type of renovation are everywhere you look. 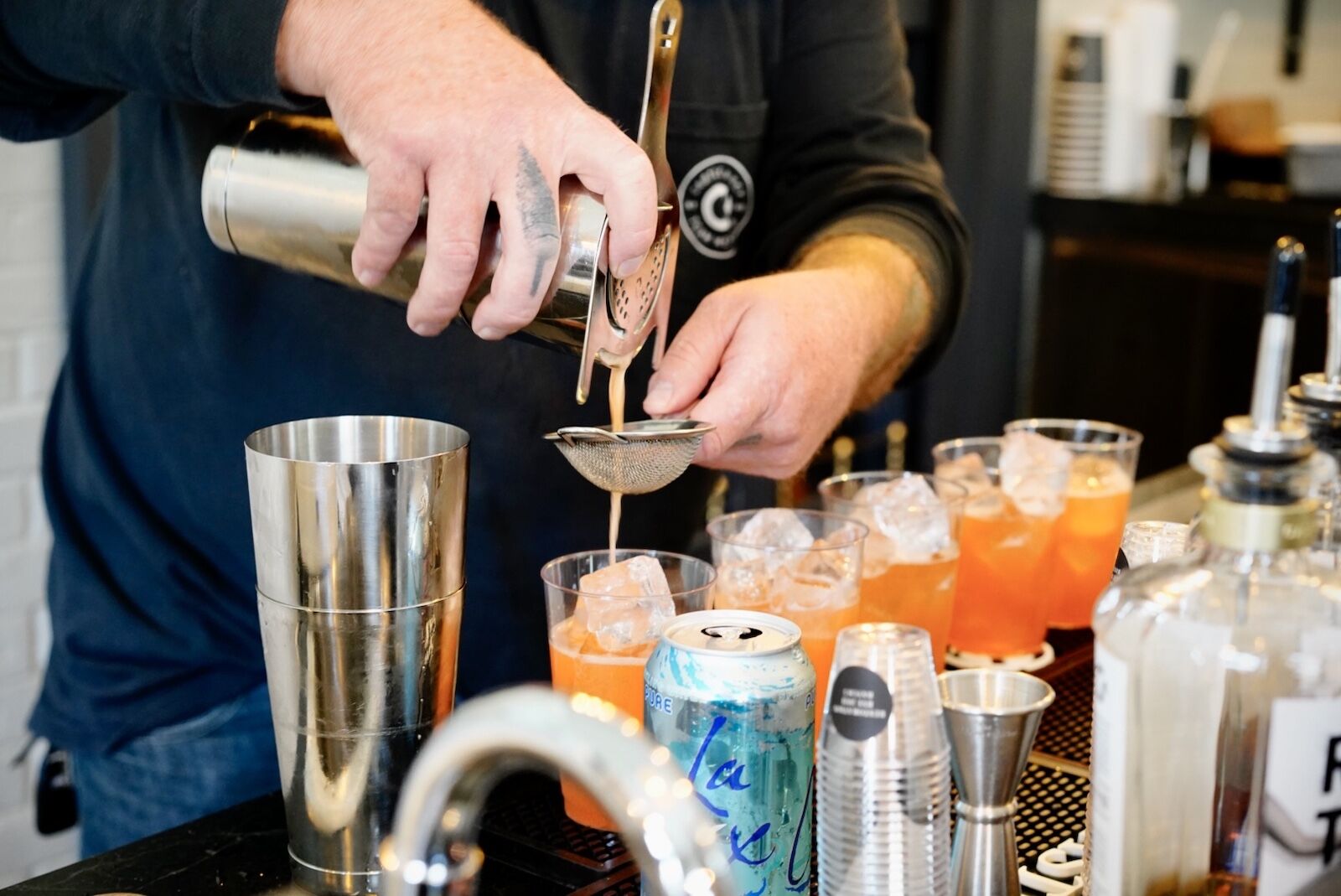 “Taylor wasn’t afraid of taking a big swing, and I don’t think Will is either,” Connors says.

The key-shaped spring house was cleaned and the resident bats relocated so the water could be used for distilling and the building as an entertaining space. The train depot turned into Counter 17 cocktail bar and a tasting room. The old boiler room is now a well stocked gift shop with an adjoining tasting room bar. Inside the castle, mash ferments and liquor runs through the stills.

“Early on, we didn’t have whiskey, but we had our park,” Connors says. 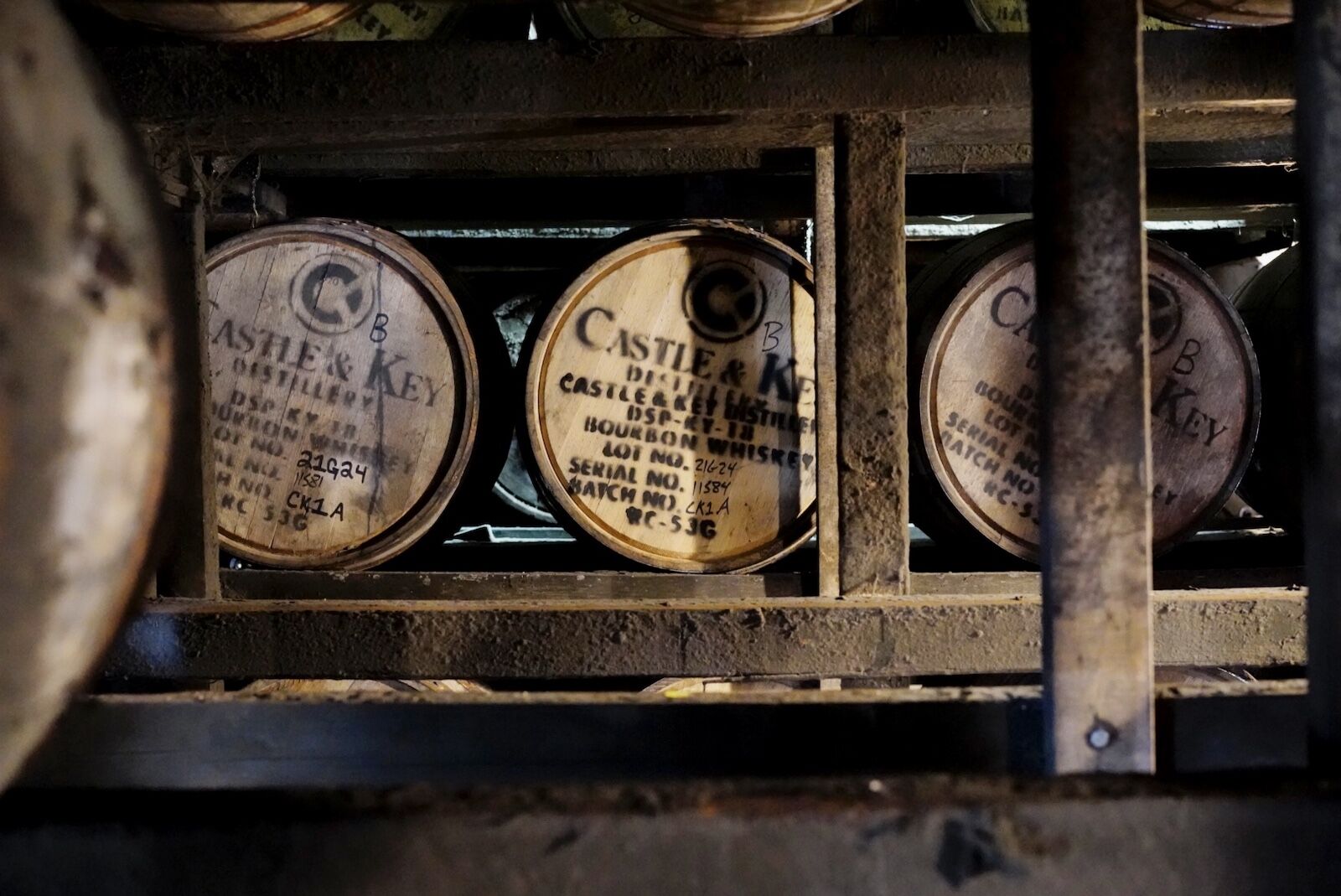 Lexington interior designer Donna Winfield kept with the theme of the original metals and concrete and added rugs and accents from Kentucky’s Maynard Studios. New touches, like gas lamps and a leather-topped bar, blend seamlessly with the restored original features.

Landscape designer Jon Carloftis restored the Sunken Garden and is responsible for lining up the plants and restoring the tourist attraction to its grandeur.

A botanical trail is lined with some of the same types of plants that Castle & Key puts in its gin. 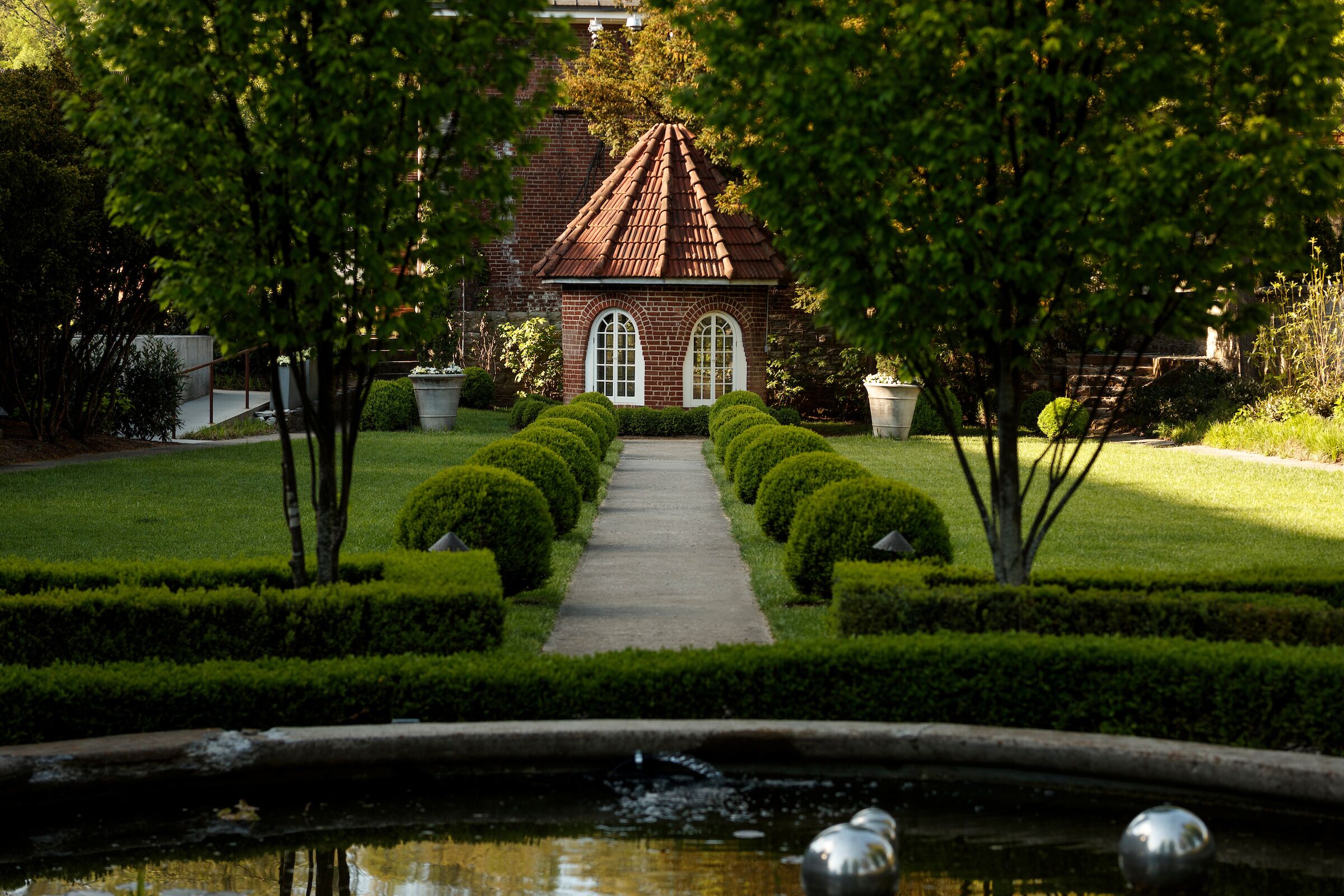 One of the most eye-catching nods to Taylor’s original mission of bringing in bourbon tourists is the sunken garden. Arvin had read about the sunken garden and knew where it was supposed to be, but there was only a mess of trees and snakes. Then, when landscape designer Jon Carloftis was working on the renovation, they hit sidewalk. It was the original sunken garden sidewalk, and plans were reconfigured to bring the sidewalk and the rest of the garden back to its former glory.

“Early concrete walkways were ludicrously expensive, and Taylor probably bought it because of that,” Arvin says. He later adds that they found pictures of Taylor with a cane and top hat standing next to the pond in the sunken garden. “Now here we are 150 or so years later living what Taylor dreamed.”

How to make the most of a visit to Castle & Key 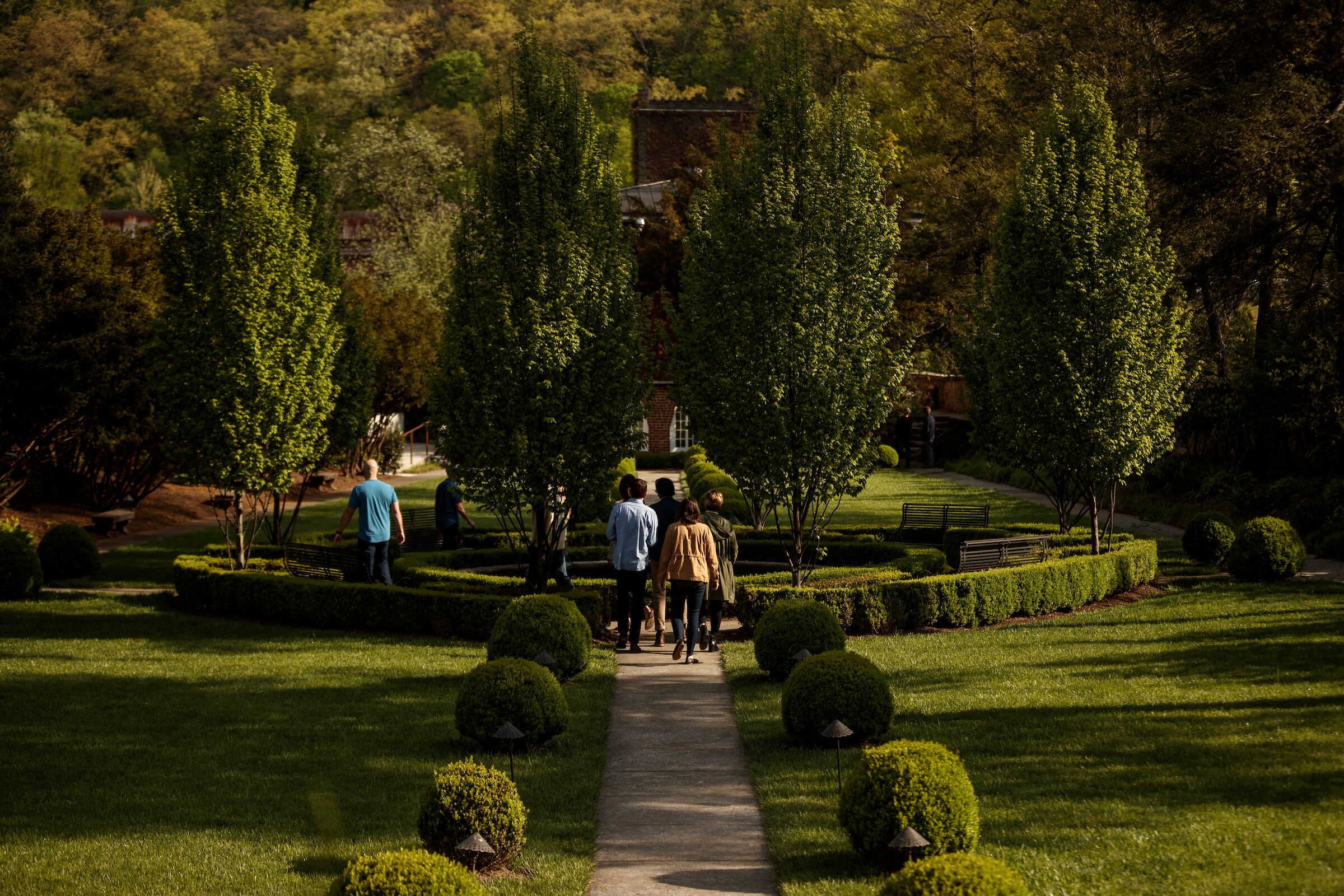 There are a number of tours you can take if you want to experience the property with an expert. The four-and-a-half hour all-inclusive Castle & Key Experience tour covers every detail about the property from the Sunken Gardens to the Boiler Room for $10. There’s also a live music schedule with bands every first Wednesday from April through October for $15 with a retail space, walk-up bar, and food vendors. There’s even an opportunity to stretch it out on the distillery property. Yoga in the Sunken Garden is an hour long and costs $10, with instructors from Homegrown Yoga in nearby Versailles leading the group.

Regardless of when you visit, you can count on something good to drink. There’s a line of gins with a flagship option as well as seasonal offerings, vodka, and a rye whiskey. But the brand’s recently released bourbon is the main attraction (this is an historic bourbon distillery, after all). Castle & Key released its first bourbon on March 26 in a limited Batch 1 run. Batch 2 will be released in May.

The bar serves cocktails on tap along with beer and wine. What’s on tap depends on what’s in season, and the menu changes weekly. On my trip, the featured drink was a play on the paper plane cocktail with Nonino, bourbon, and soda water called the paper train.

No matter what you get at Castle & Key, you can be sure that the experience of drinking on the castle grounds is unlike anything else you’ll find in Kentucky bourbon country.